Protest spreads in the Middle East

The issues in Tunisia, Lebanon, and Egypt differ, but yesterday anger boiled over in all three countries as grievances were brought to the streets. In Tunisia, where protests have already overthrown President Zine el-Abidine Ben Ali, continued demonstrations sought to depose his allies still in their positions. Meanwhile Tunisia's interim government has issued an international arrest warrant for the former president and members of his family. In Lebanon, Sunni supporters of ousted Prime Minister Saad Hariri took to the streets in a "day of rage", burning tires and blockading roads in Tripoli and Sidon. It was in Egypt where the most dramatic events unfolded as the largest protests in a generation rocked Cairo. Demonstrators, many inspired by events in Tunisia, called for an end to nearly 30 years of rule by President Hosni Mubarak. Collected here are photographs from all three countries. -- Lane Turner (34 photos total) 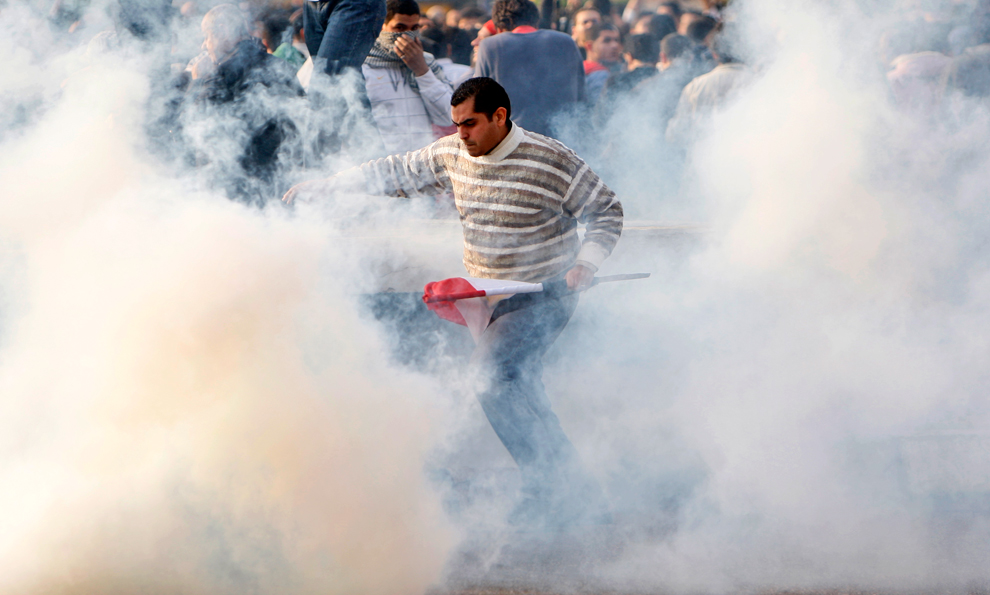 A protester carrying an Egyptian flag runs through clouds of tear gas at a demonstration in Cairo January 25, 2011. Thousands of anti-government protesters, some hurling rocks and climbing atop an armored police truck, clashed with riot police in the center of Cairo in a Tunisia-inspired demonstration to demand the end of Hosni Mubarak's nearly 30 years in power. (AP Photo/Nasser Nasser)

2
Demonstrators surround a water-canon truck used by police to disperse a protest in central Cairo to demand the ouster of President Hosni Mubarak and call for reforms January 25, 2011. (MOHAMMED ABED/AFP/Getty Images) # 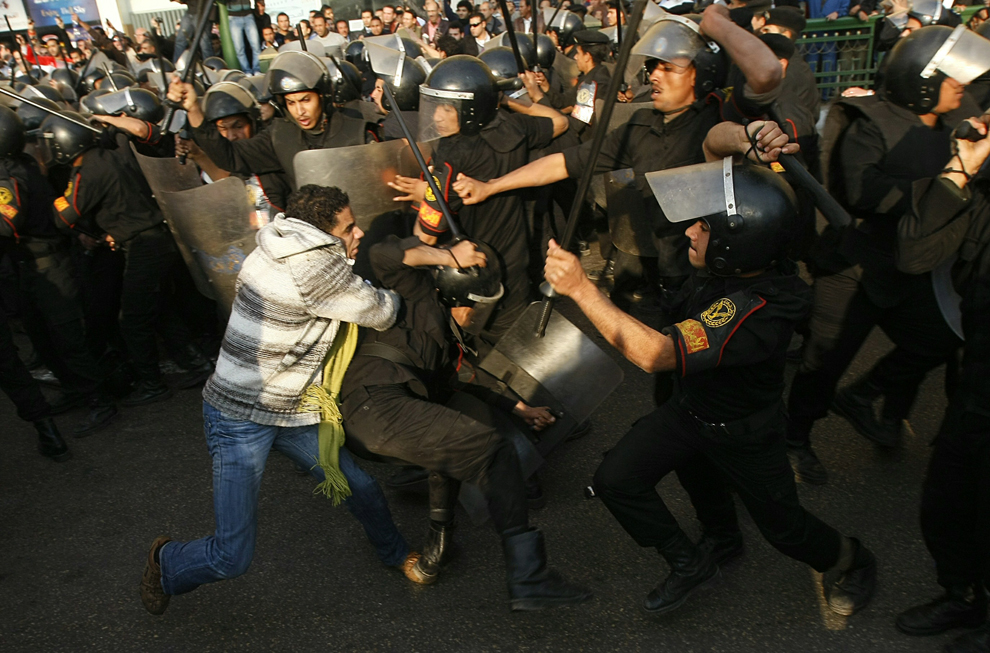 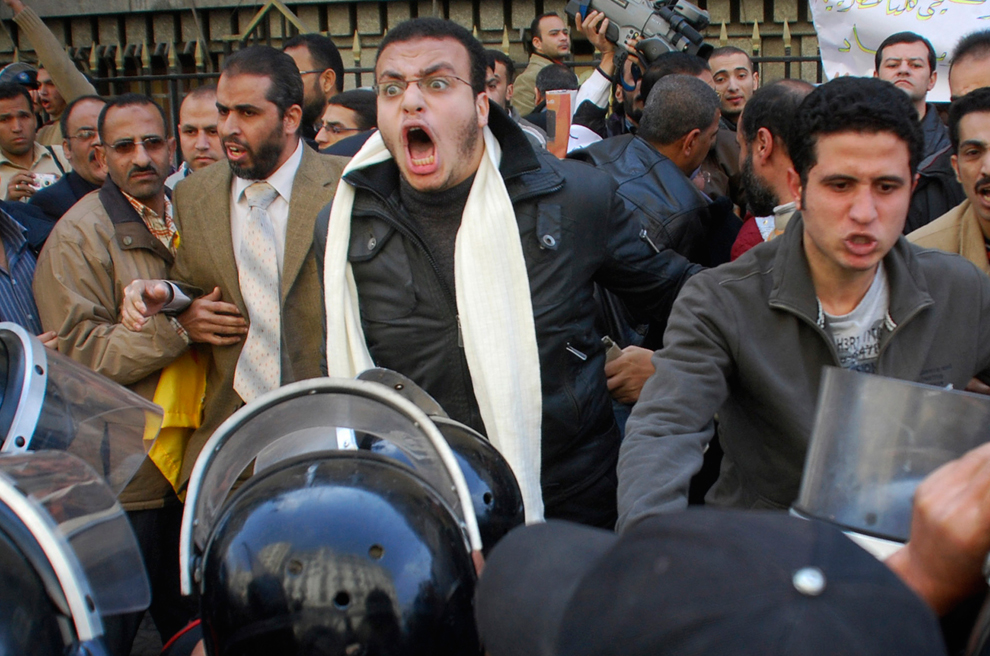 5
Protesters are confronted by riot police as they demonstrate in downtown Cairo, chanting against President Hosni Mubarak and calling for an end to poverty. (AP Photo/Mohammed Abu Zaid) # 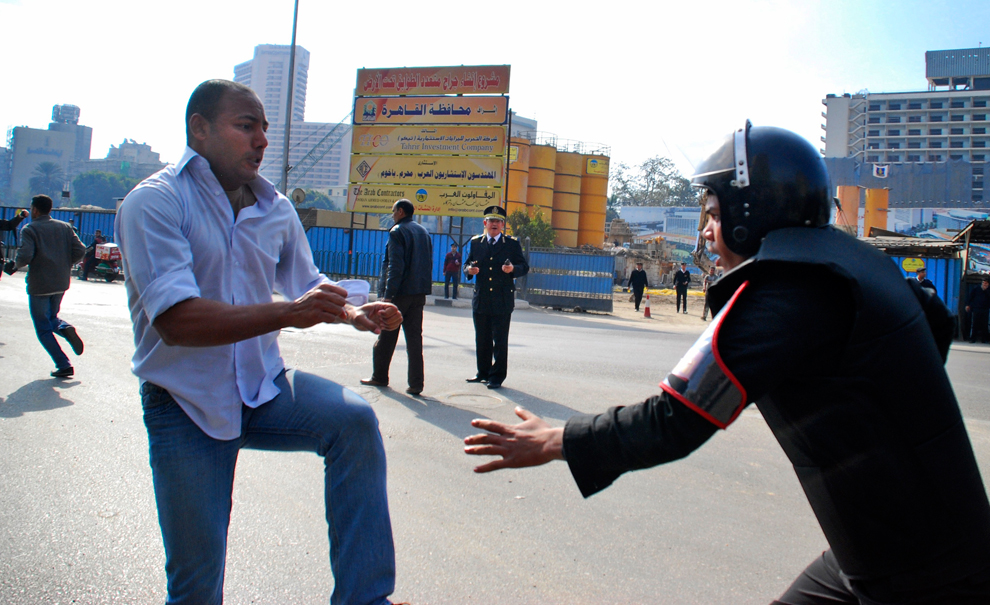 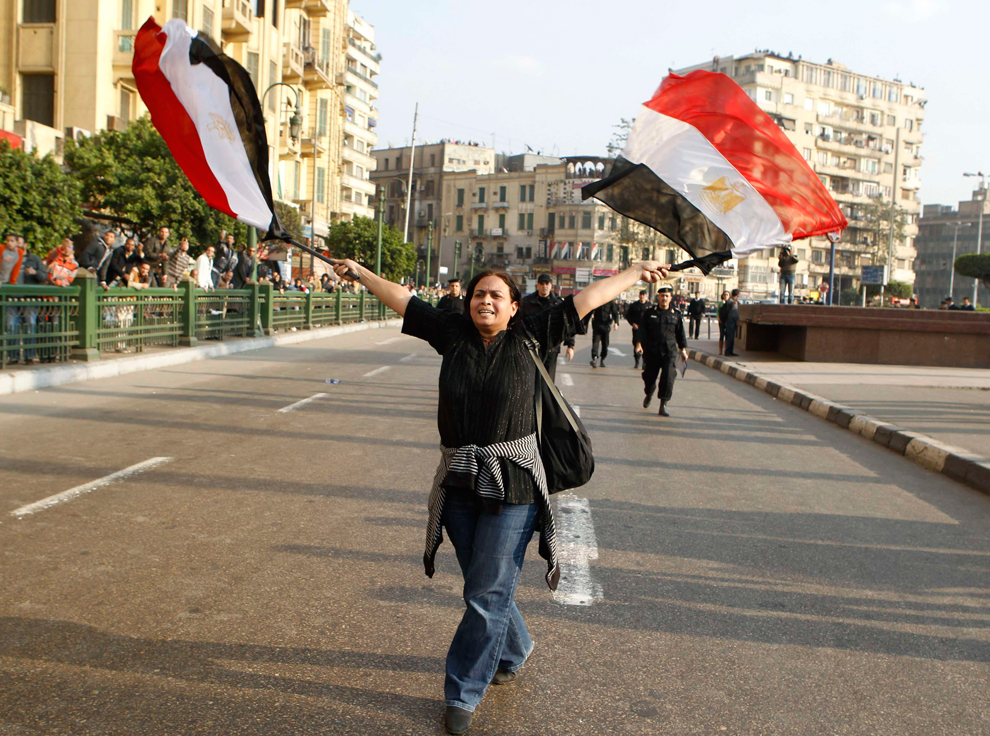 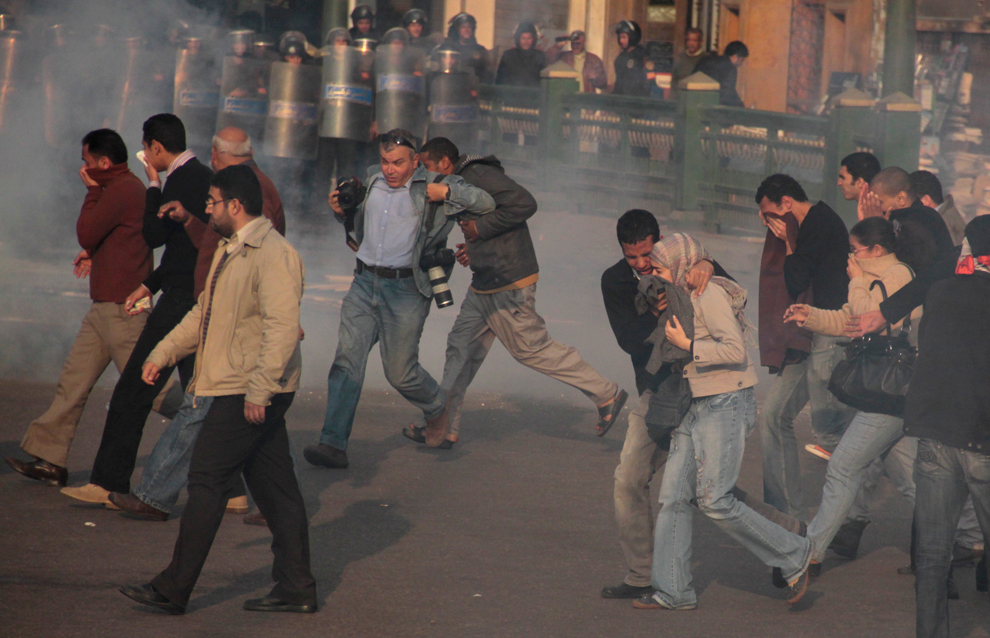 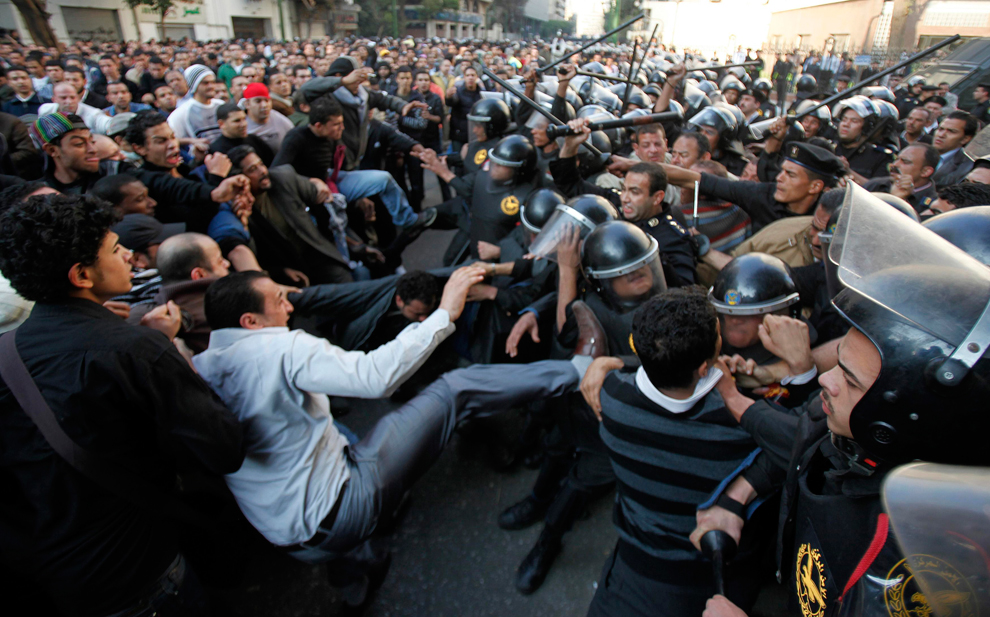 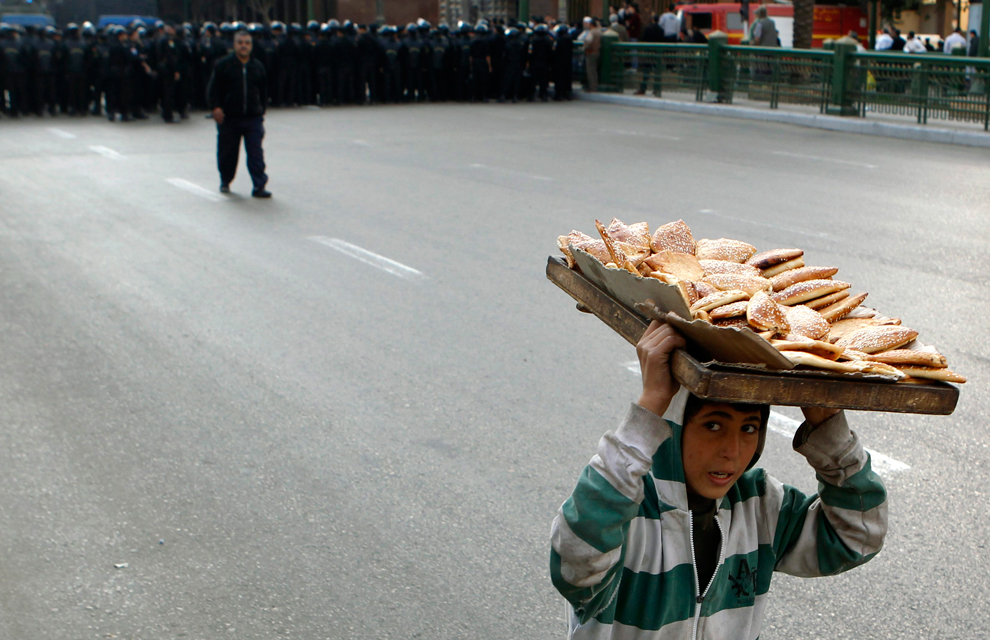 12
A boy runs from a column of riot policeman during anti-government protests in downtown Cairo January 25, 2011. Egyptian police fired tear gas at protesters gathered in the city center, and earlier used a water cannon in the same location. (REUTERS/Amr Abdallah Dalsh) # 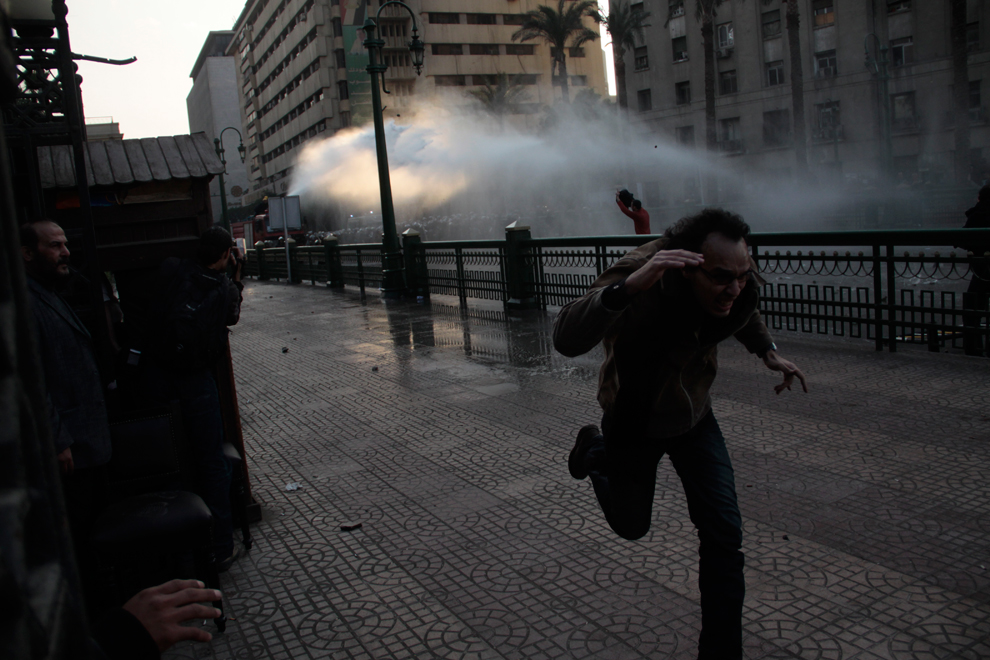 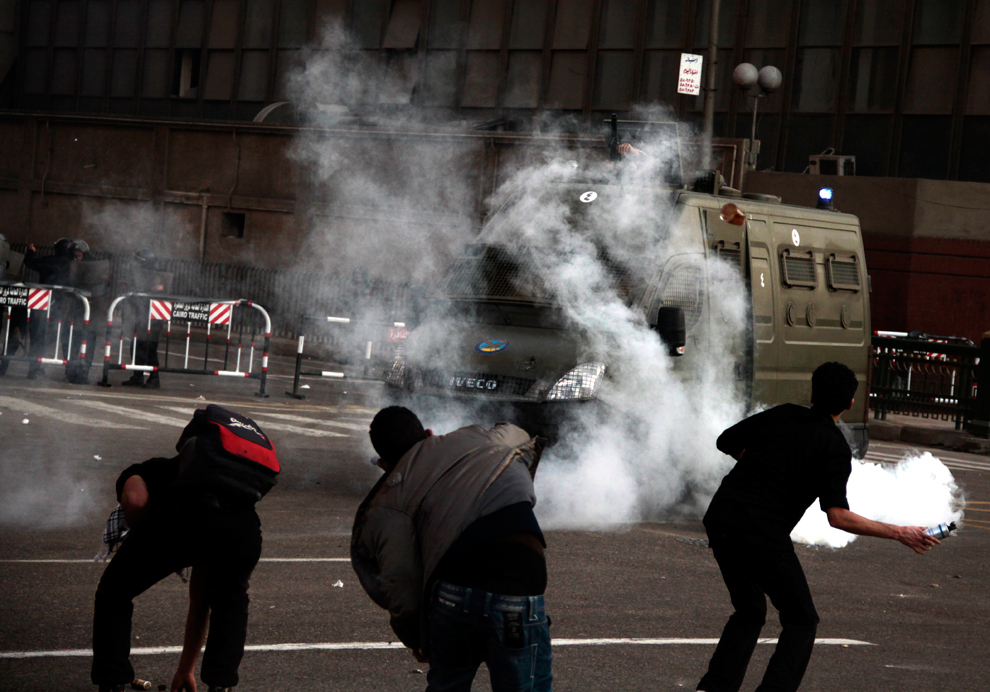 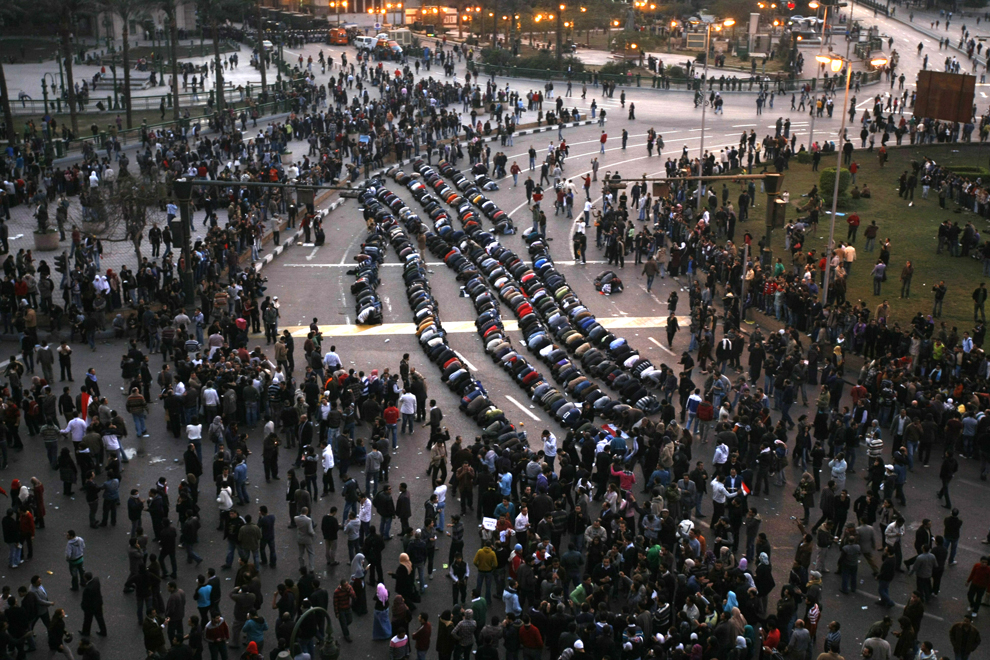 15
Egyptian demonstrators pray in central Cairo during a protest to demand the ouster of President Hosni Mubarak and call for reforms January 25, 2011. (MOHAMMED ABED/AFP/Getty Images) # 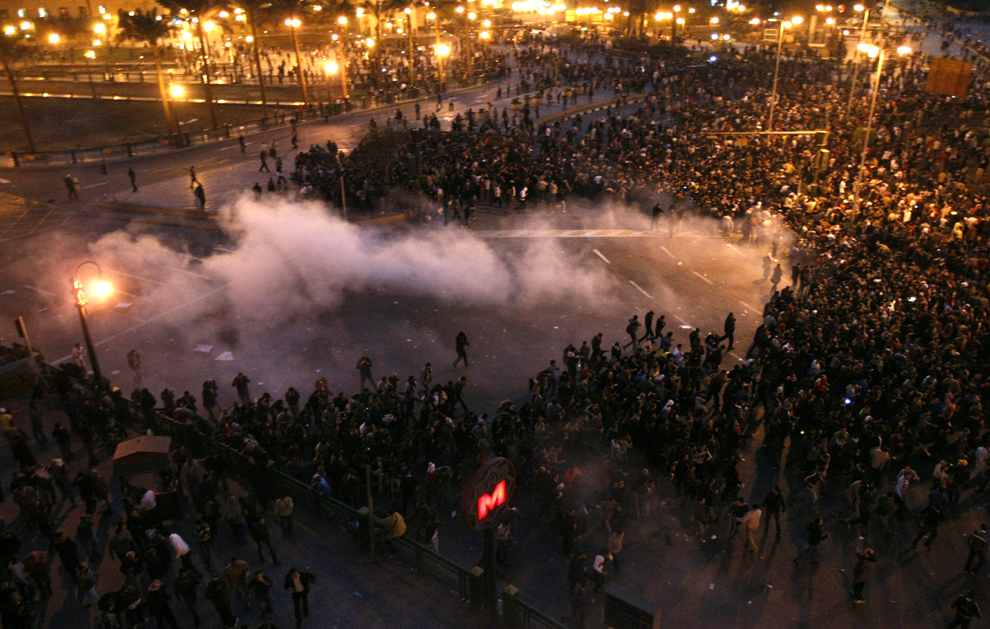 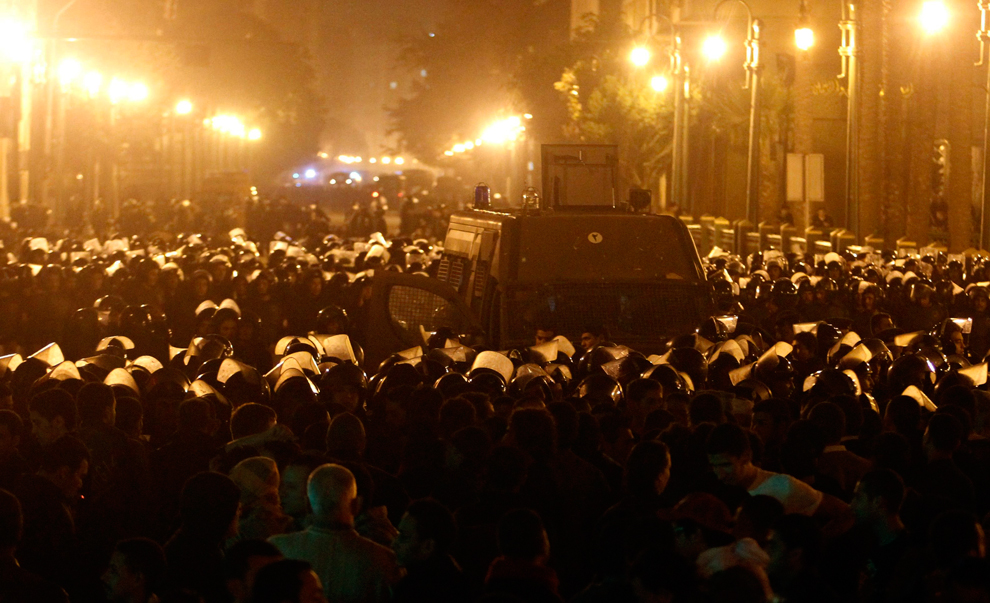 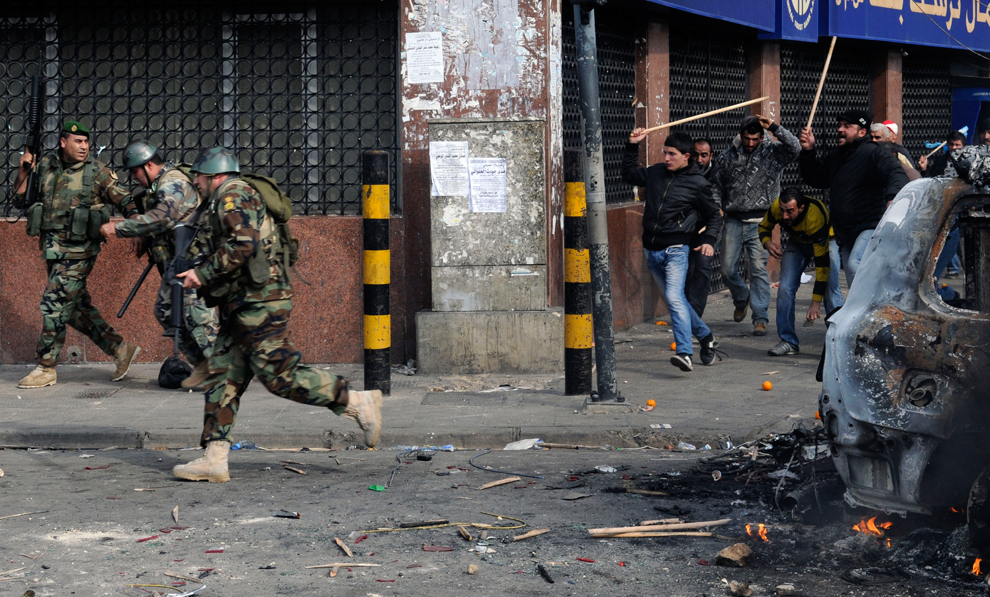 18
Lebanese soldiers fall back as protesters wield sticks and pursue them during a protest in the northern port city of Tripoli, Lebanon January 25, 2011. Sunnis protested the rising power of the Shiite militant group Hezbollah as Lebanese lawmakers gave the militant group's pick for prime minister enough support to form the next government. (AP Photo/Ahmad Omar) # 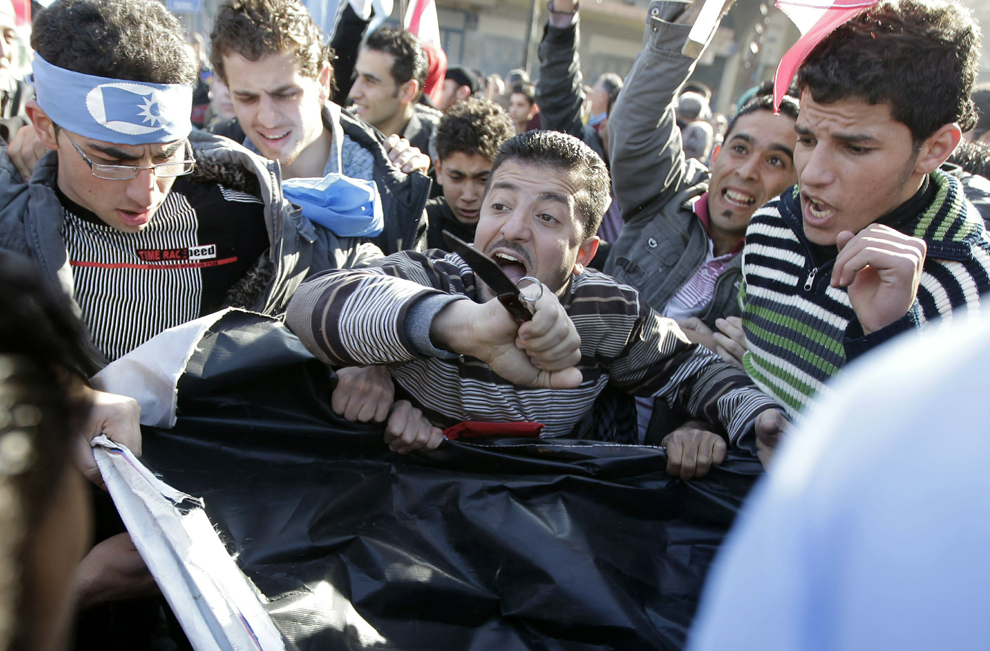 19
Supporters of the Future Movement rip a poster of Najib Miqati during a demonstration in support of the caretaker Prime Minister Saad Hariri in Tripoli January 25, 2011, as hundreds of people took part in a 'day of rage' over the likely appointment as prime minister of Hezbollah-backed tycoon Najib Miqati. (JOSEPH EID/AFP/Getty Images) # 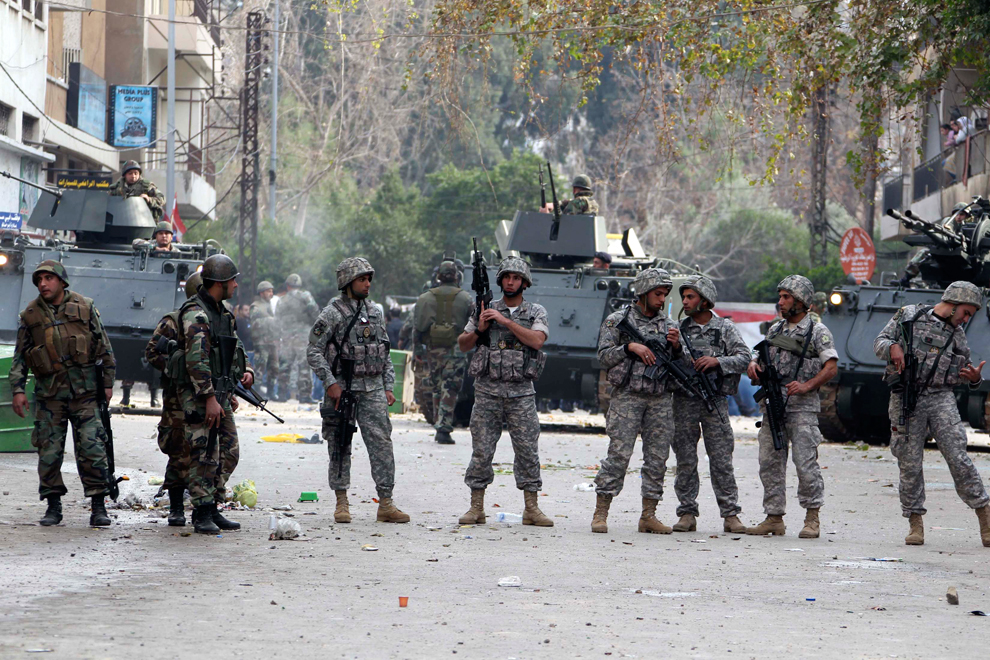 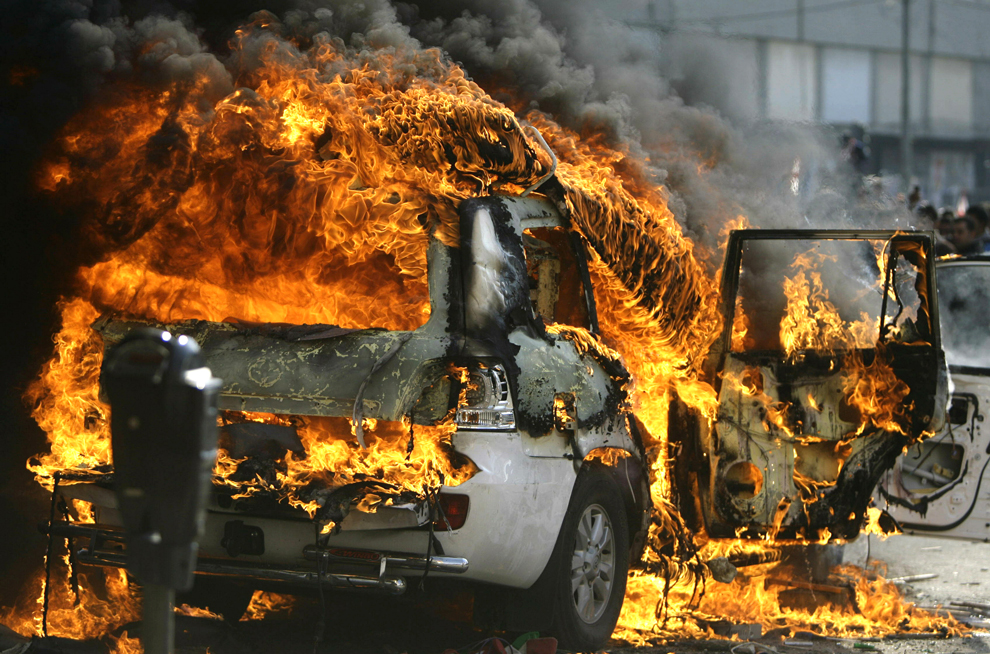 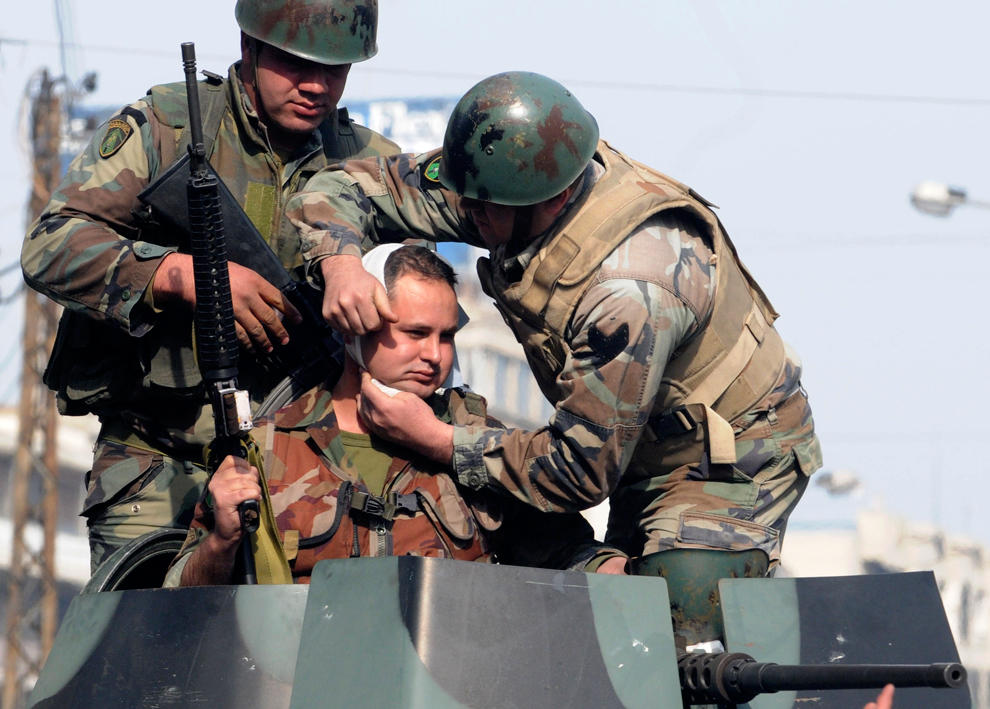 22
A Lebanese soldier bandages the head of an injured colleague during a protest in the northern port city of Tripoli January 25, 2011. (AP Photo) # 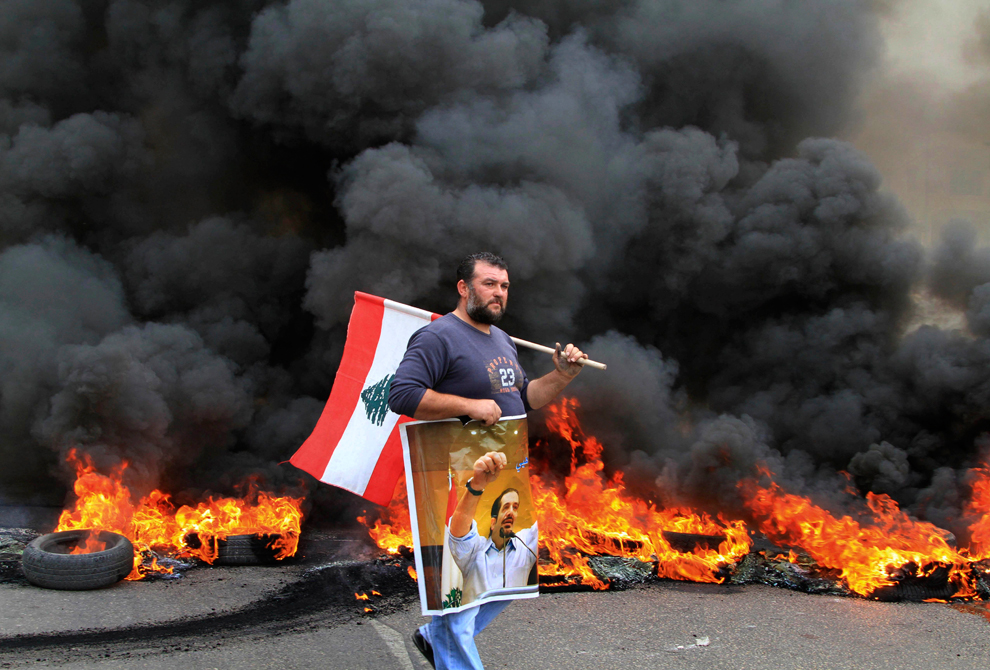 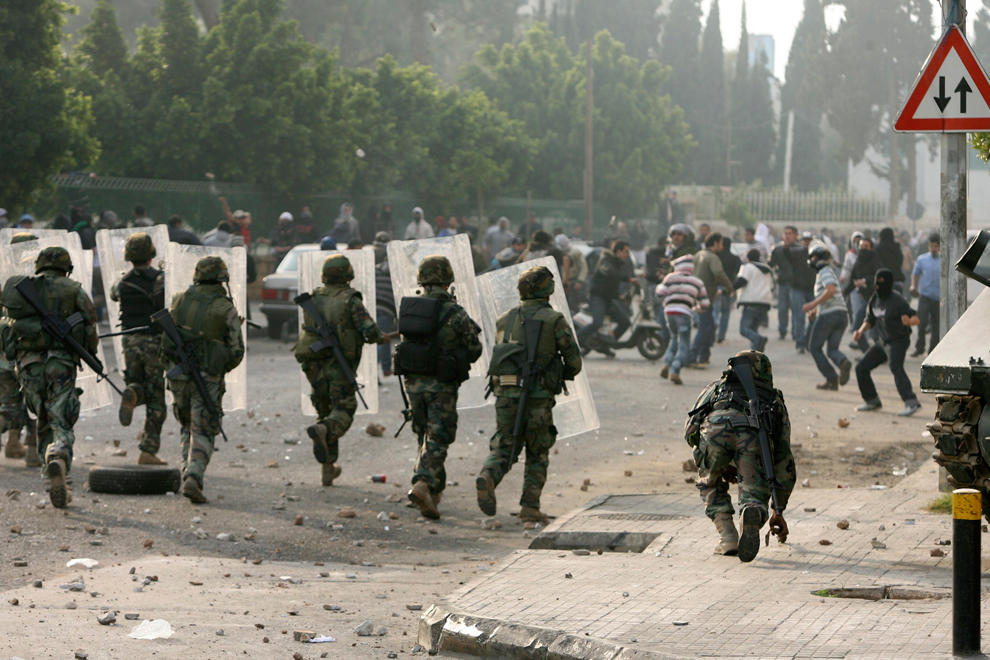 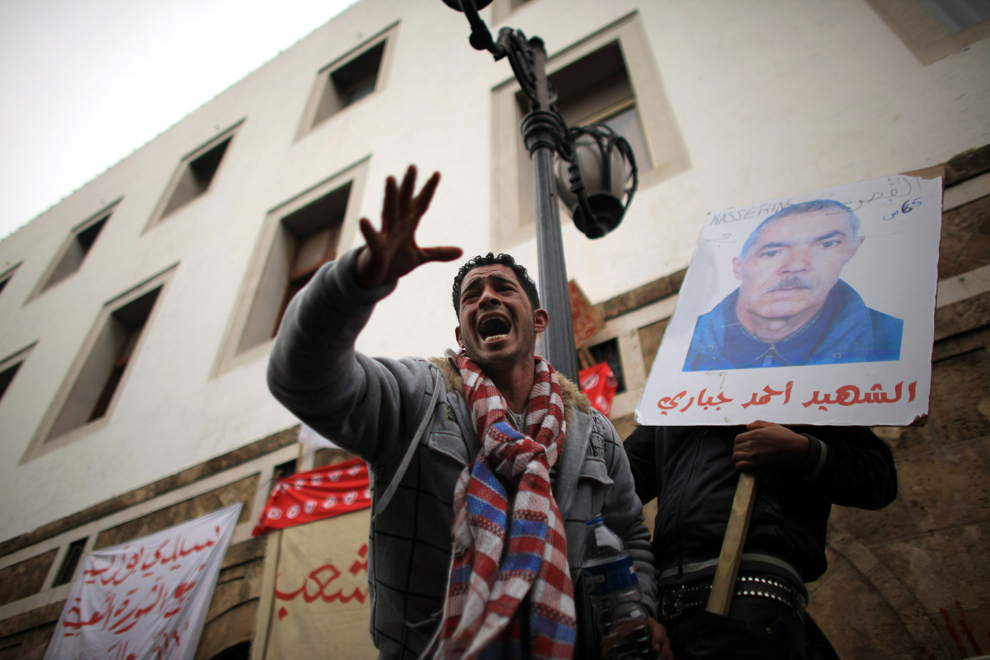 27
Tunisians continue their demonstrations outside Prime Minister Mohamed Ghannouchi's offices in Government Square in Tunis January 25, 2011. The government square has become a makeshift camp as protestors defy the emergency curfew and sleep on the ground. Many vow to continue until the interim cabinet resigns. (Christopher Furlong/Getty Images) # 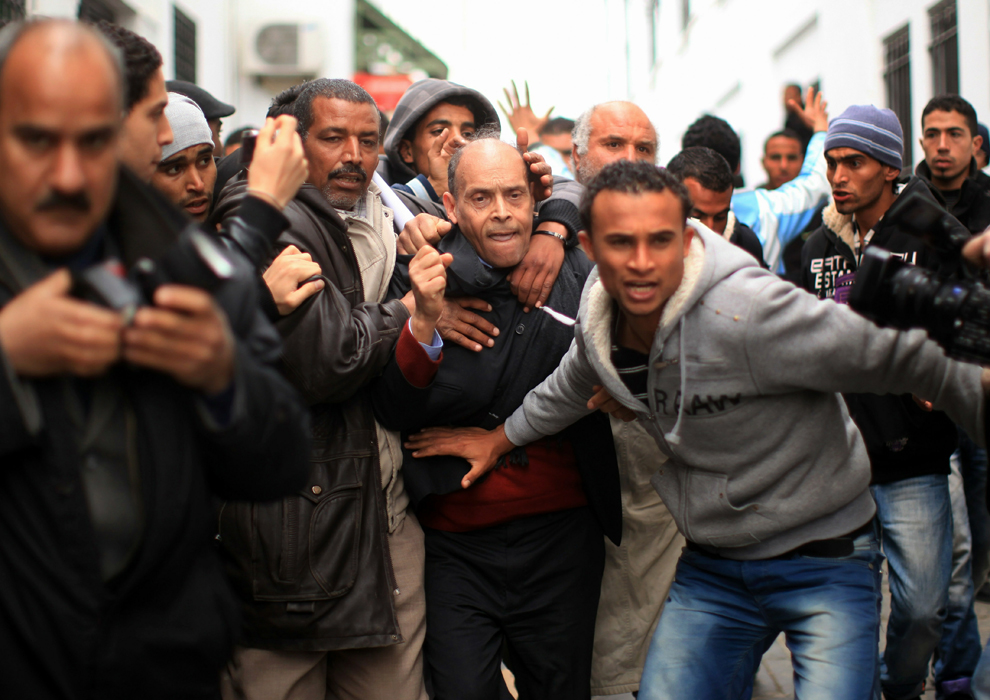 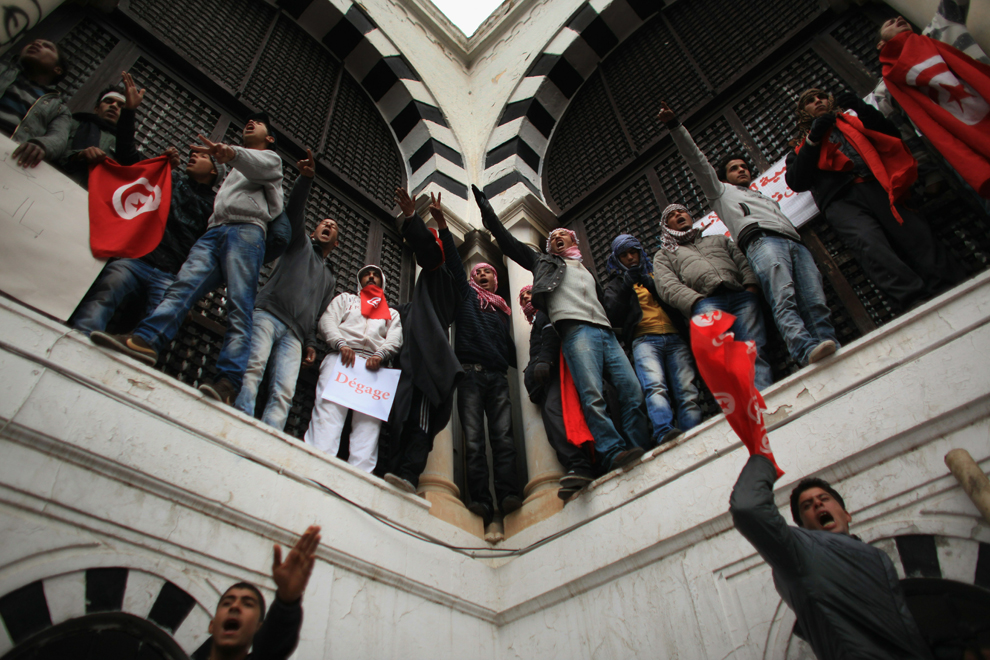 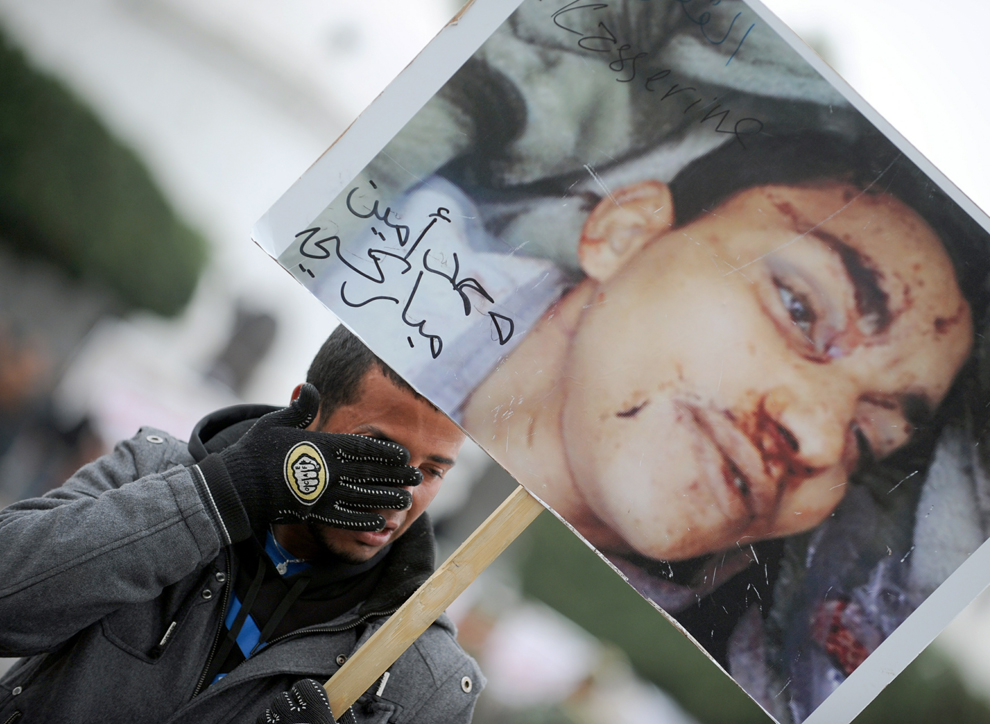 30
A resident of Kasserine, Tunisia cries as he holds a portrait of his brother Mohamed Mbarki, who was killed during clashes with Tunisian security forces in December, as he demonstrates in front of the government palace in Tunis January 25, 2011. (FETHI BELAID/AFP/Getty Images) # 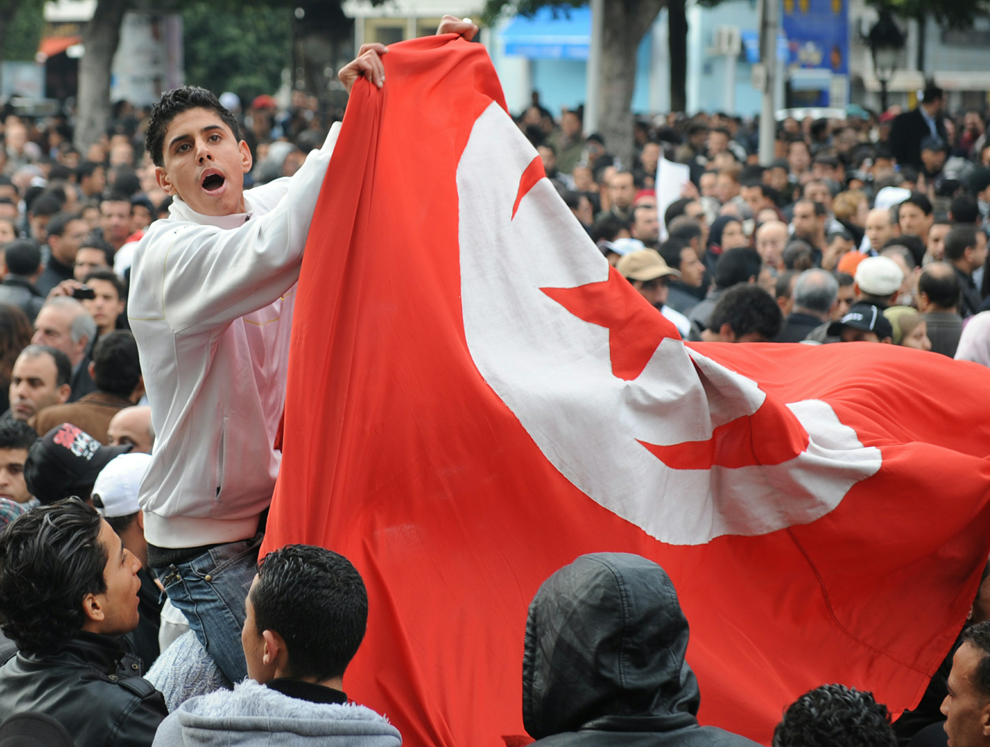 31
Tunisian pro-government demonstrators hold a national flag during a protest on Habib Bourguiba Avenue in Tunis January 25, 2011. Hundreds of people taking part in the first rally backing Tunisia's new interim government were chased away by protesters calling for the leadership to resign. (FETHI BELAID/AFP/Getty Images) # 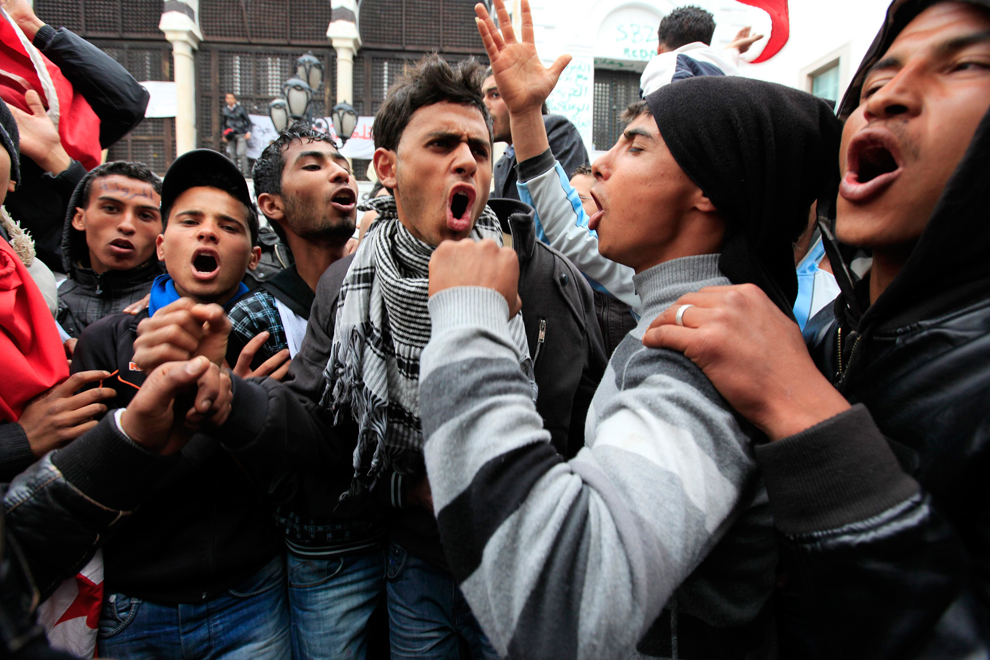 32
Protesters from Tunisia's poor rural heartlands chant slogans outside the prime minister's office in Tunis January 25, 2011. Protesters demonstrated in the capital to demand that the revolution they started should now sweep the remnants of the fallen president's old guard from power. (REUTERS/Zohra Bensemra) # 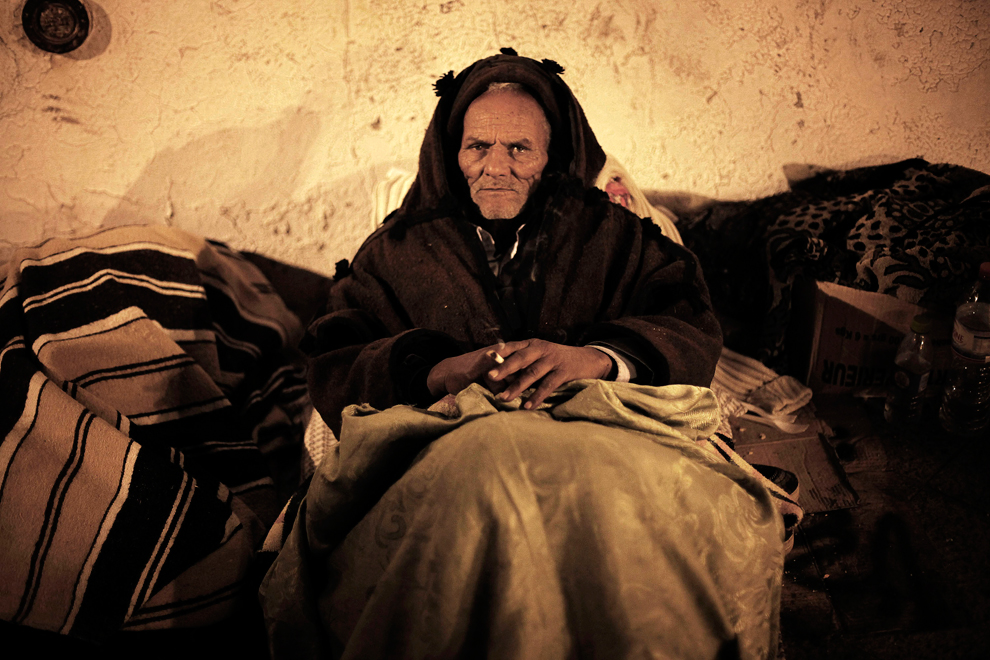 33
A protester from a rural area camps out overnight with others outside the prime minister's office in Tunis January 25, 2011. (REUTERS/ Finbarr O'Reilly) # 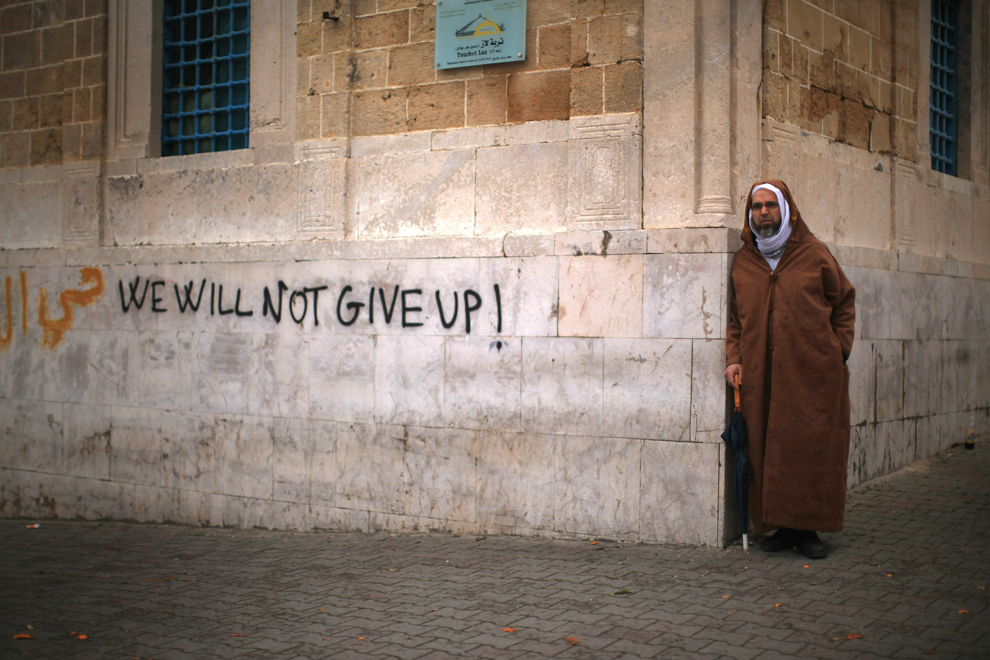 More links and information
Protests in Egypt and unrest in Middle East â as it happened - Guardian.co.uk, 1/25
Egypt protests: 'We ran a gauntlet of officers beating us with sticks' - Guardian.co.uk, 1/26
A Regionâs Unrest Scrambles U.S. Foreign Policy - New York Times, 1/26
< Back to front page
RECENT ENTRIES