Checking in on Saturn

While we humans carry on with our daily lives down here on Earth, perhaps stuck in traffic or reading blogs, or just enjoying a Springtime stroll, a school-bus-sized spacecraft called Cassini continues to gather data and images for us - 1.4 billion kilometers (870 million miles) away. Over the past months, NASA's Cassini spacecraft has made several close flybys of Saturn's moons, caught the Sun's reflection glinting off a lake on Titan, and has brought us even more tantalizing images of ongoing cryovolcanism on Enceladus. Collected here are a handful of recent images from the Saturnian system. (30 photos total) 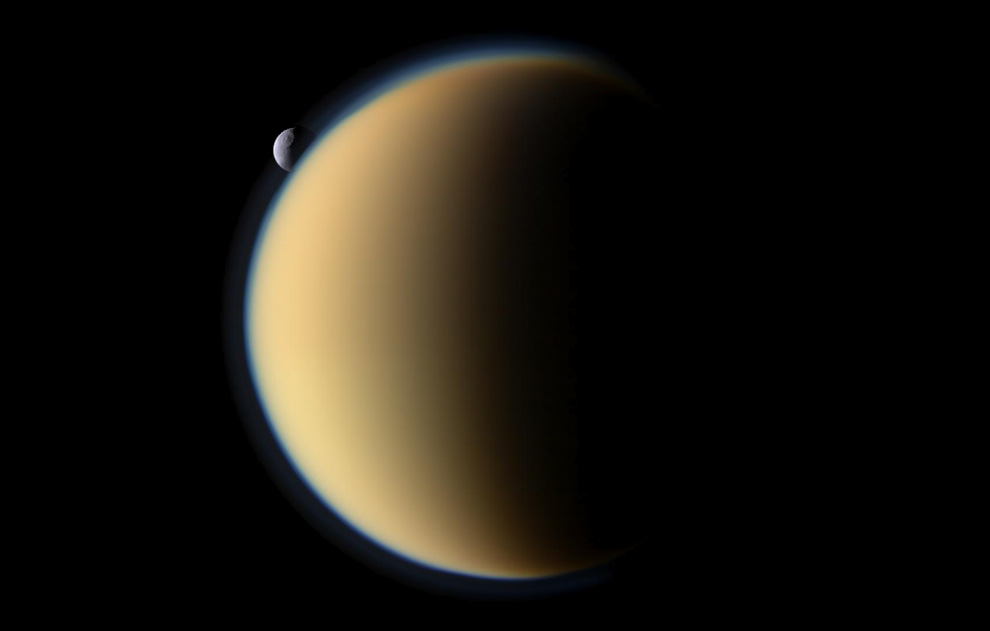 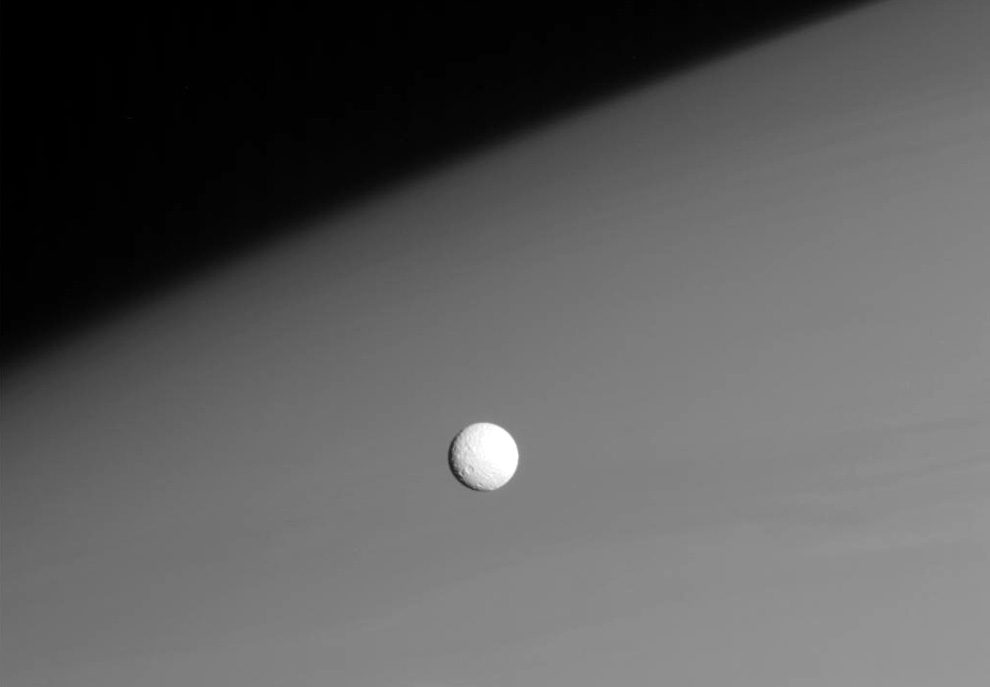 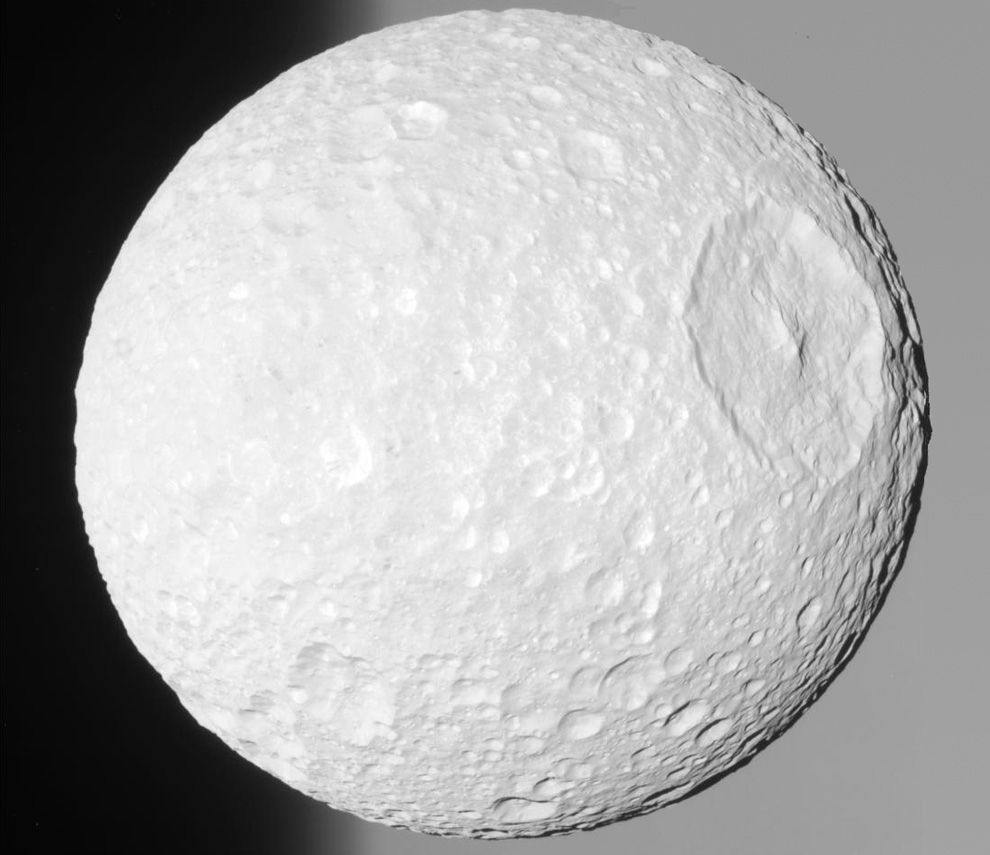 3
On February 13, 2010 Cassini approached closer to Mimas at approximately 70,000 km away, Saturn's limb and upper atmosphere visible in the background. (NASA/JPL/SSI) # 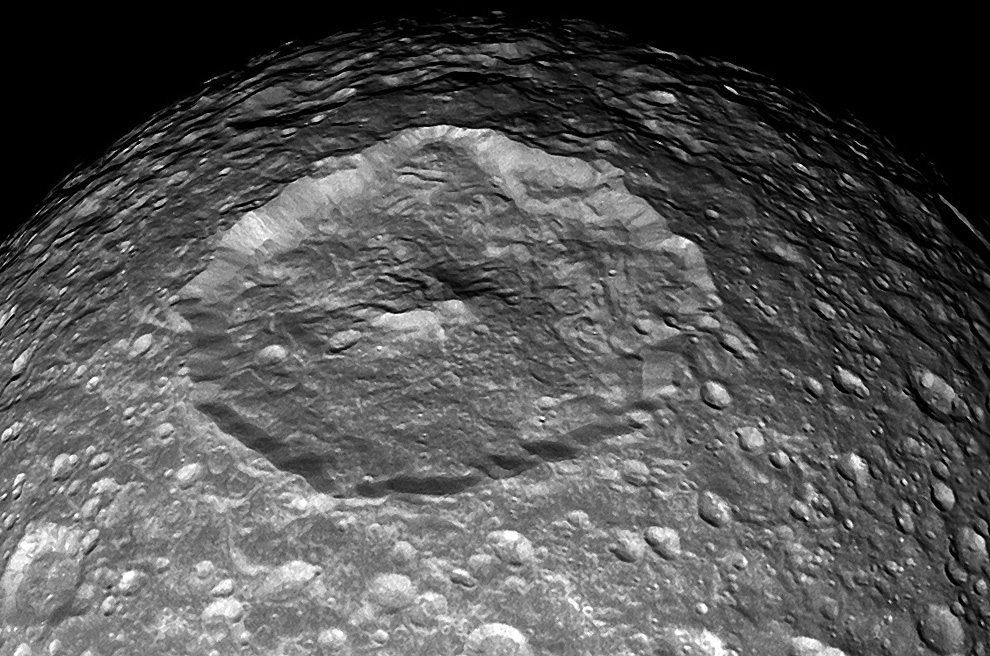 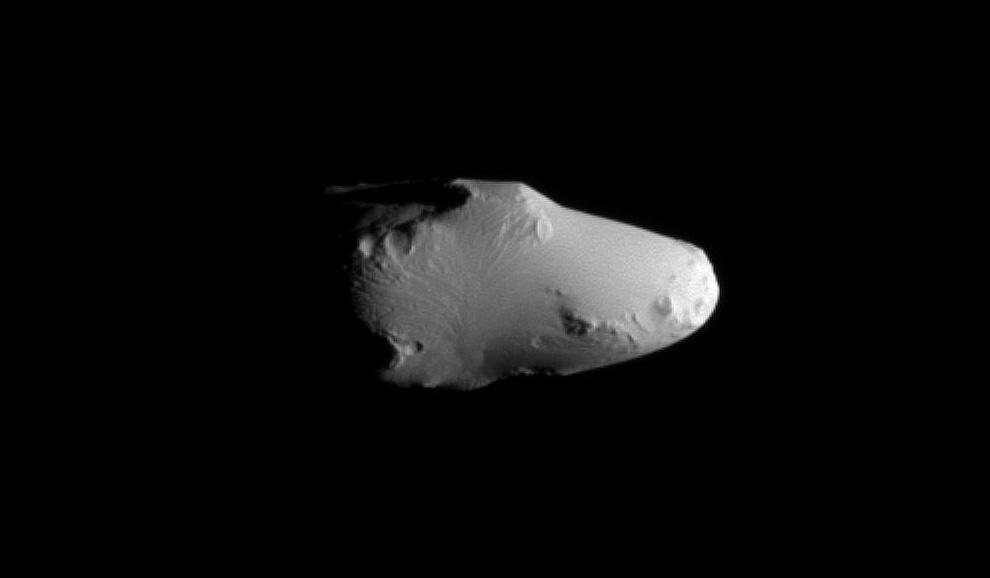 5
Cassini's February 2010 encounter with tiny moon Calypso yielded this incredibly detailed view. Irregularly shaped Calypso (30 x 23 x 14 km) is one of two Trojan moons that travel in the same orbit of the larger moon Tethys, traveling ahead and behind. Calypso's smooth surface does not appear to retain the record of intense cratering that most of Saturn's other moons possess. The image was taken on February 13th, 2010 at a distance of approximately 21,000 km (13,000 mi) from Calypso. (NASA/JPL/SSI) # 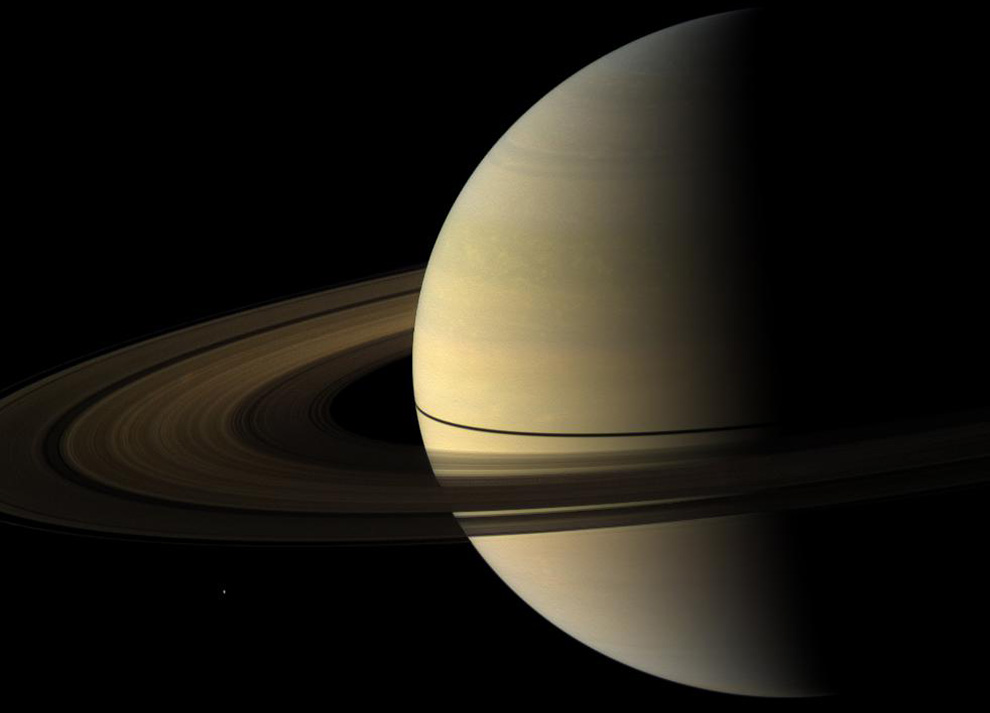 6
The Cassini spacecraft captured this natural color view of Saturn almost a month after the planet's August 2009 equinox. The shadow cast on the planet by the rings remains narrow. Mimas can be seen as a speck at lower left. Image obtained with the Cassini spacecraft wide-angle camera on September 4th, 2009 from approximately 2.7 million km (1.7 million mi) away from Saturn. (NASA/JPL/SSI) # 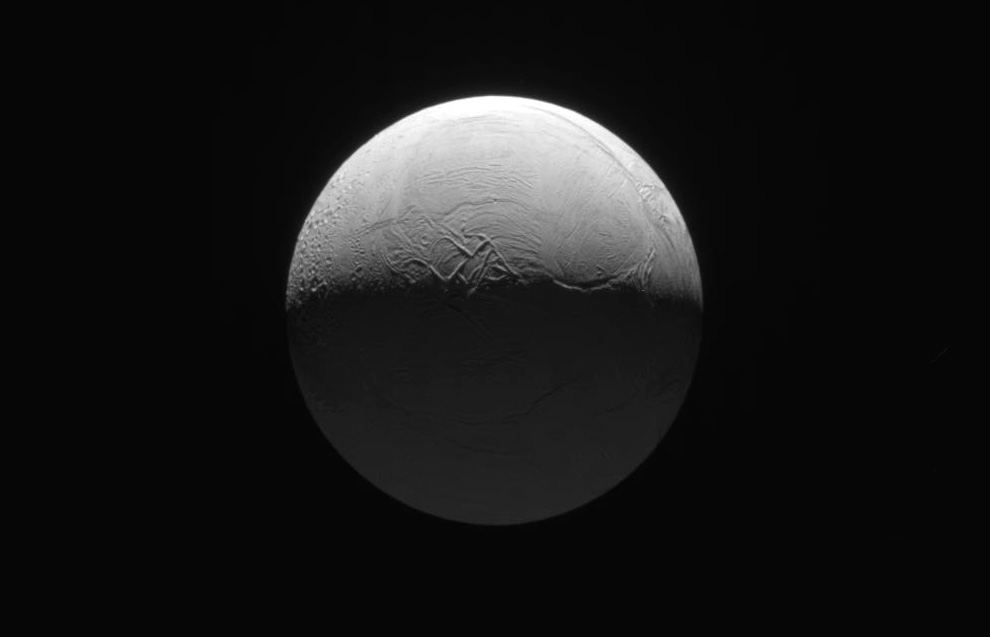 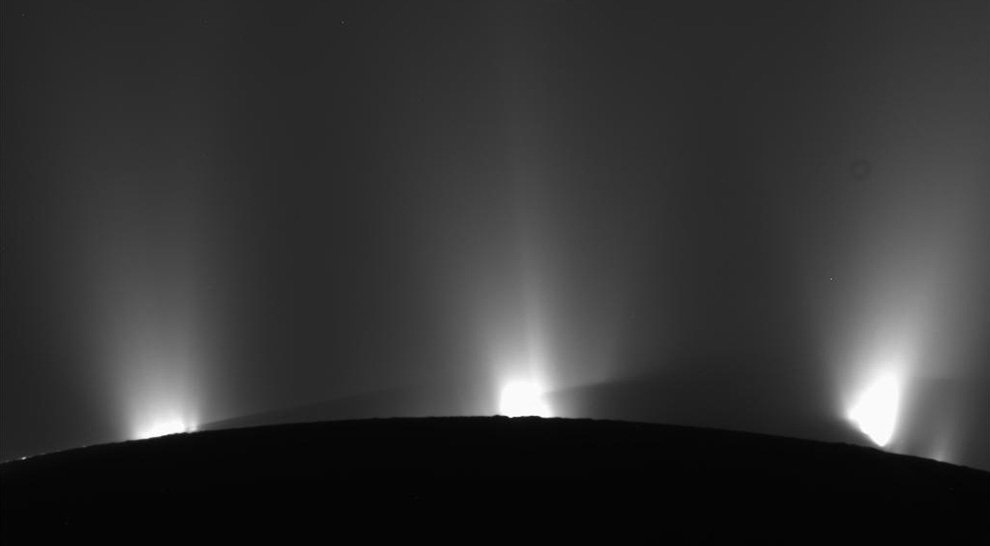 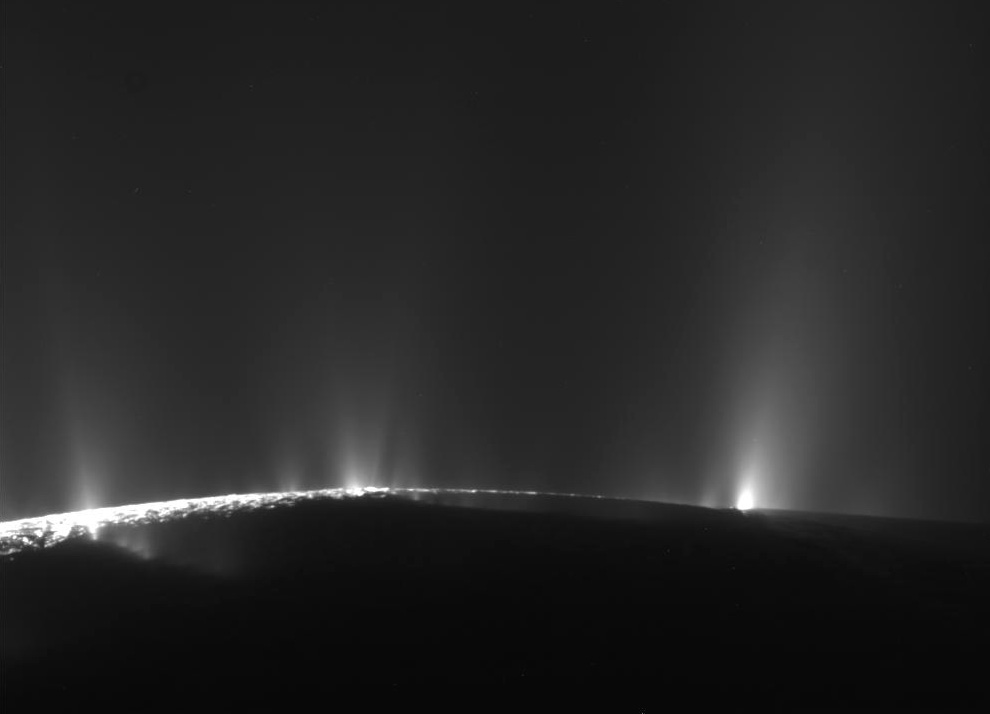 9
Another view of Enceladus' southern ice plumes, seen on November 21, 2009. The moon's cryovolcanic activity was first discovered by Cassini in 2005, and continues to be a focus of research. Primarily made up of water vapor, the plumes also contain trace amounts of nitrogen, methane, carbon dioxide, propane, ethane, and acetylene. (NASA/JPL/SSI) #

10
Cassini approaches closer to Enceladus on November 21, 2009, approximately 2,028 km away, showing fissures and ridges in the icy surface. (NASA/JPL/SSI) # 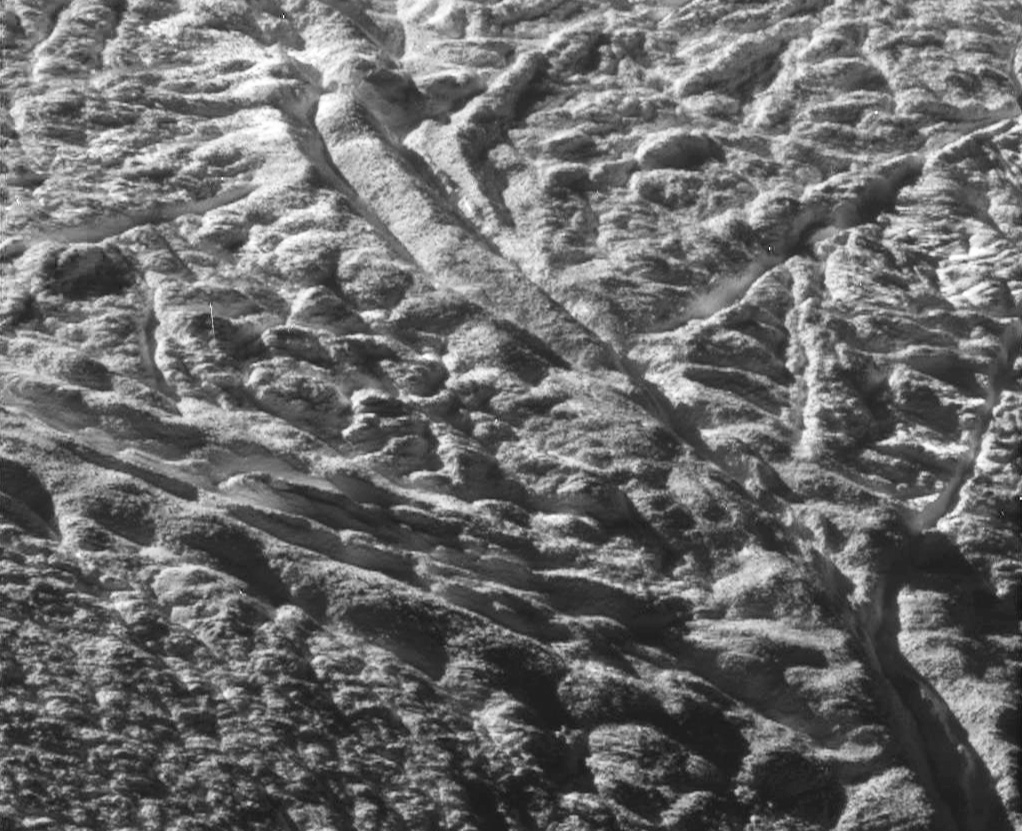 11
A closer view of a feature on Enceladus called Baghdad Sulcus, one of four "tiger stripes" that cross Enceladus' south pole, seen on November 21, 2009. Cassini was targeting the area to examine plume sources, the scale is approximately 30m (100ft) per pixel. (NASA/JPL/SSI) # 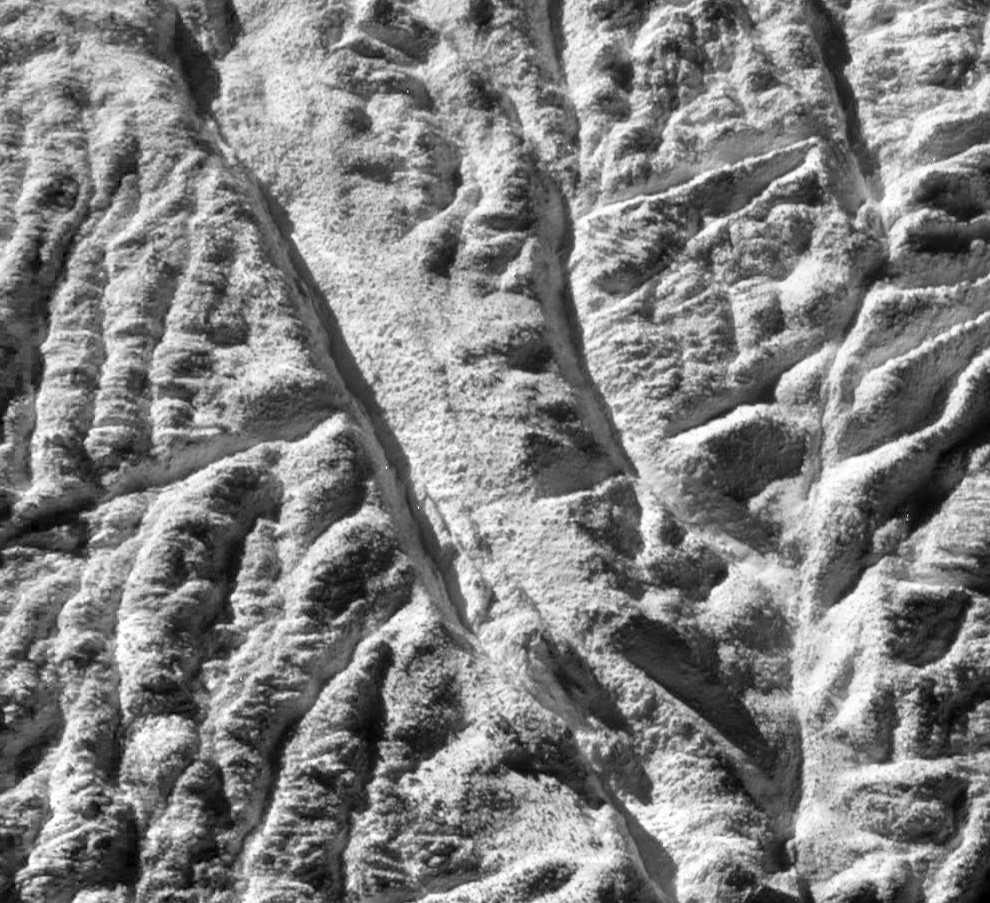 12
An even closer view of Baghdad Sulcus on Enceladus, seen by Cassini on November 21, 2009. With a scale of approximately 12m (40ft) per pixel, relatively small surface features such as icy boulders appear visible. This image covers approximately 12 km (7.5 mi) from side to side. (NASA/JPL/SSI) # 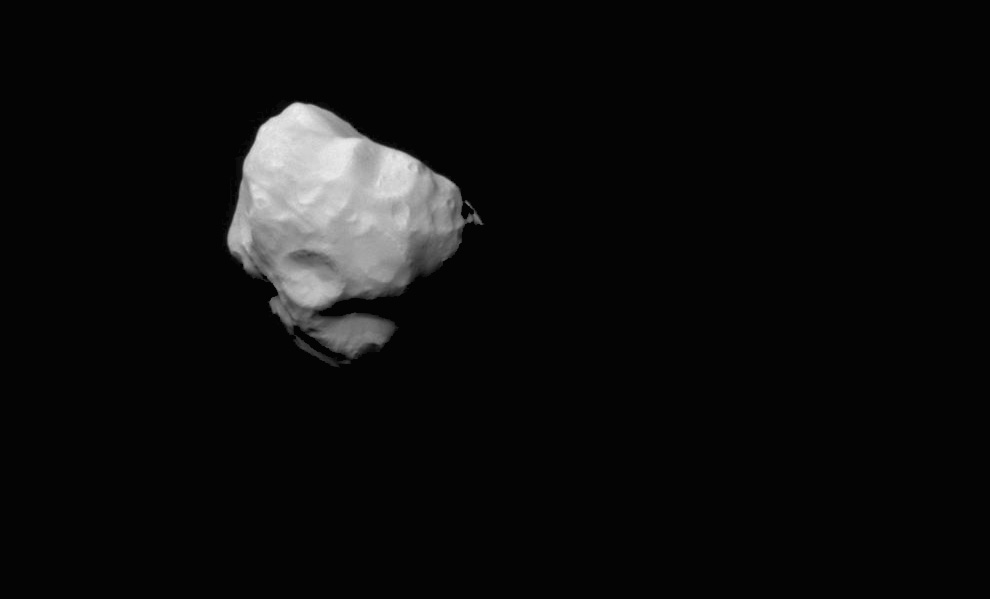 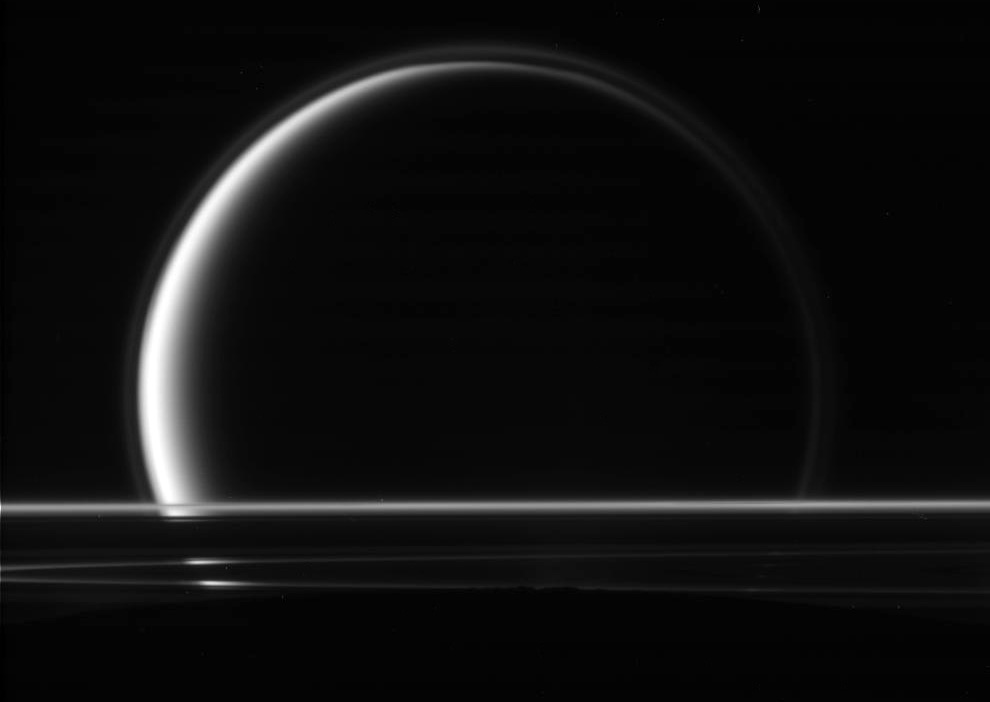 15
On May 18, 2010, Cassini aimed its camera towards Saturn's largest moon Titan, capturing at the same time the edge of Enceladus (dark region at bottom) and Saturn's rings between the two moons. (NASA/JPL/SSI) # 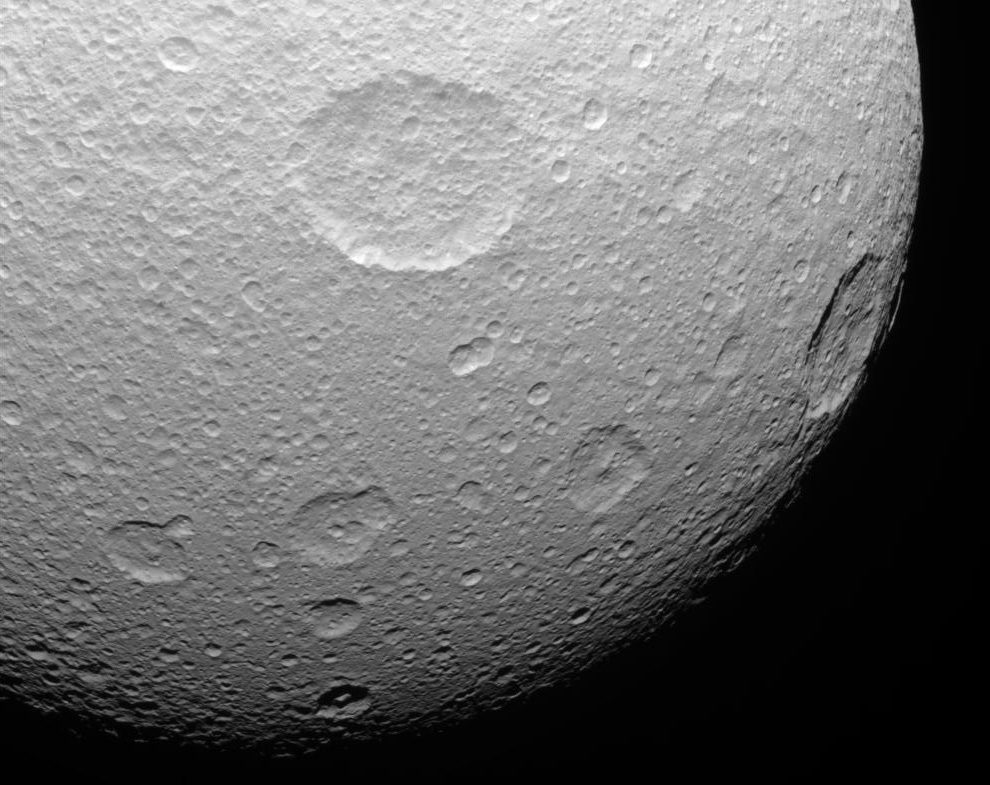 16
An October 14th, 2009 view of Saturn's brightly lit moon Tethys. Tethys is one of the four Saturnian moons discovered by astronomer Giovanni Domenico Cassini, first seen in 1684. It is an icy body slightly larger than 1,000 km (620 mi) across. (NASA/JPL/SSI) # 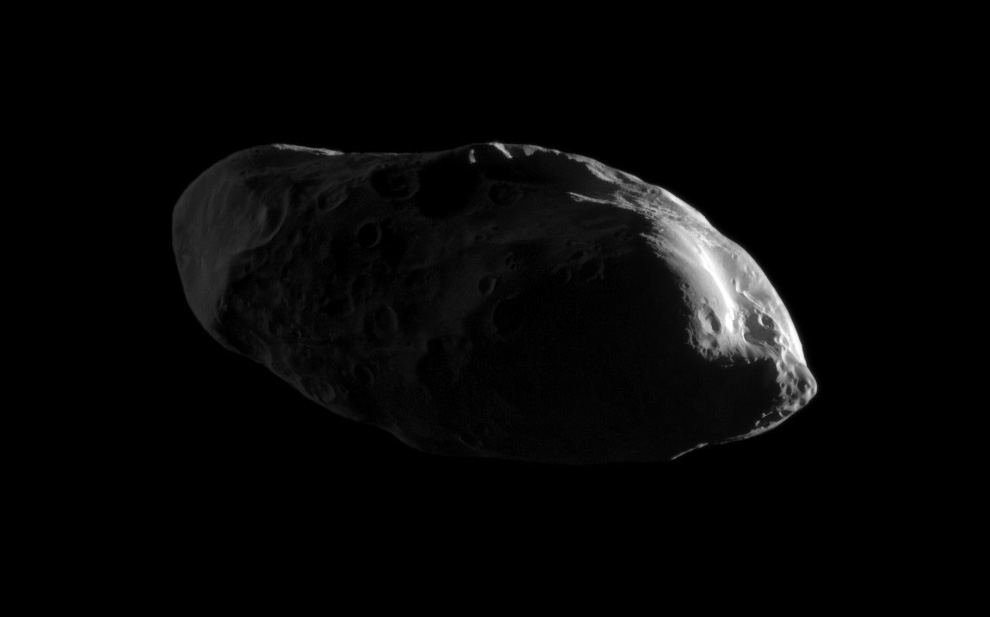 17
Appearing like eyes on a potato, craters cover the dimly lit surface of the moon Prometheus in this image from the Cassini spacecraft's flyby on January 27th, 2010. This view looks toward the trailing hemisphere of Prometheus (86 km, or 53 mi across). The view was obtained at a distance of approximately 34,000 km (21,000 mi) from Prometheus. Image scale is 200 meters (656 feet) per pixel. (NASA/JPL/SSI) # 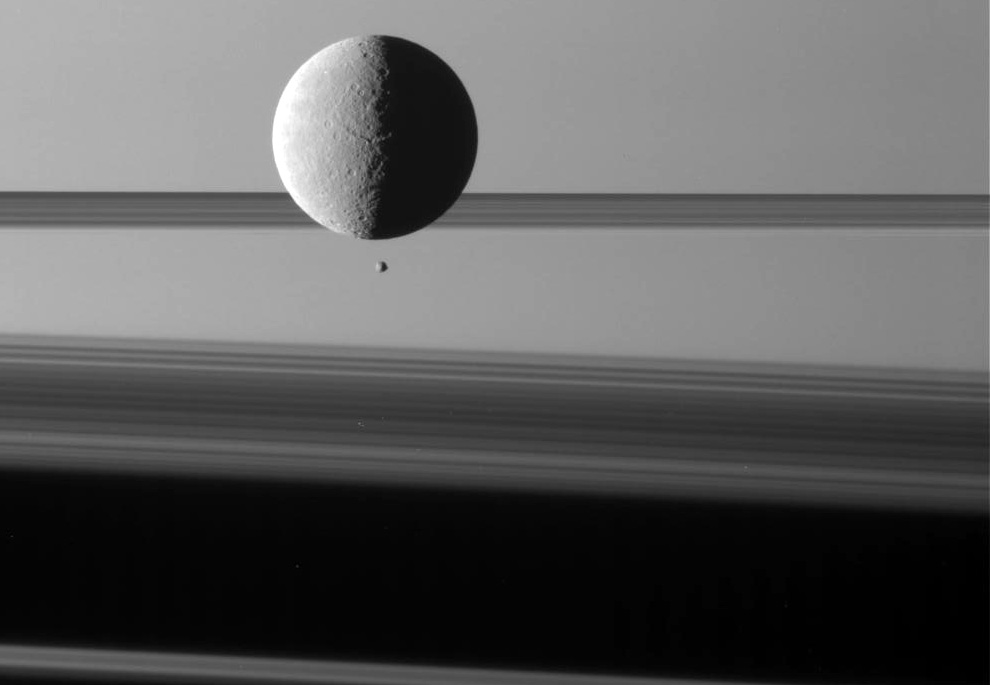 18
Saturn's moon Rhea looms near its sibling moon Epimetheus in this Cassini image with the planet and its rings in the background. The two moons aren't actually close to each other. The view was obtained at a distance of approximately 1.2 million km (746,000 mi) from Rhea and 1.6 million km (994,000 mi) from Epimetheus. The image was taken on March 24, 2010. Image scale is 7 km (5 mi) per pixel on Rhea and 10 km (6 mi) per pixel on Epimetheus. (NASA/JPL/SSI) # 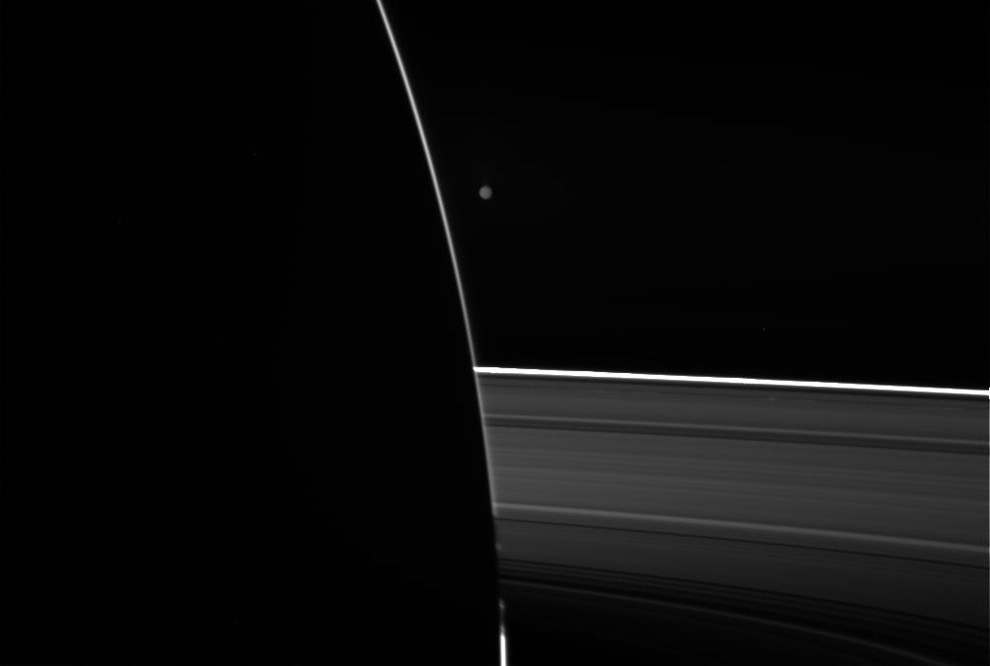 19
On December 25, 2009, Cassini was on the dark side of Saturn and took this image looking toward the moon Enceladus, seen at top, beyond the planet and its rings. Light passing through Saturn's atmosphere creates the bright arc seen from the top to the bottom of the image. At bottom center, the light passing through is blocked by shadows from the rings. (NASA/JPL/SSI) # 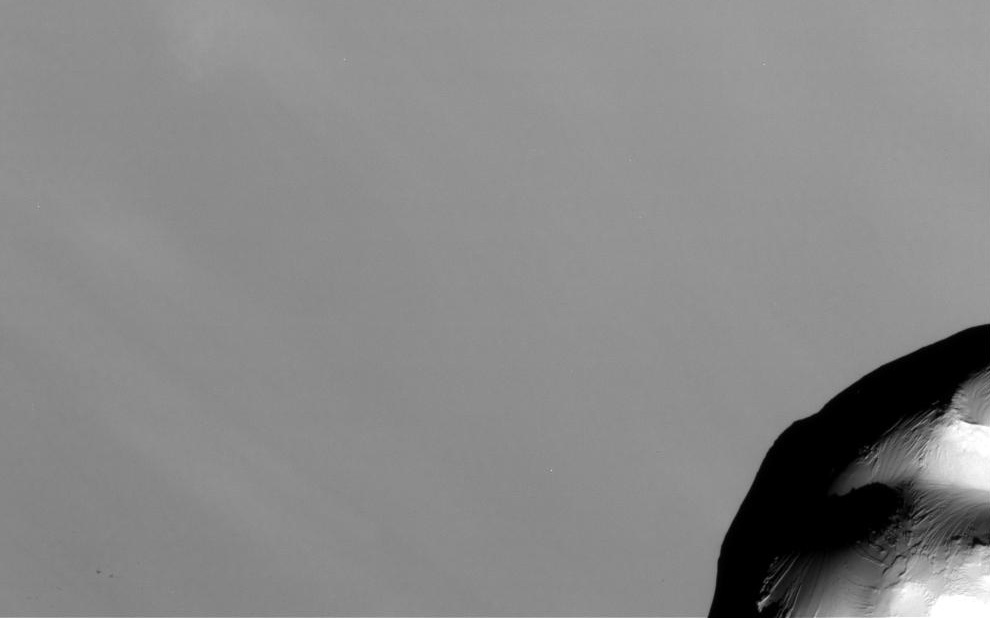 20
Cassini looks down on the clouds in the upper atmosphere of Saturn, just over the shoulder of the moon Helene, on March 03, 2010. (NASA/JPL) # 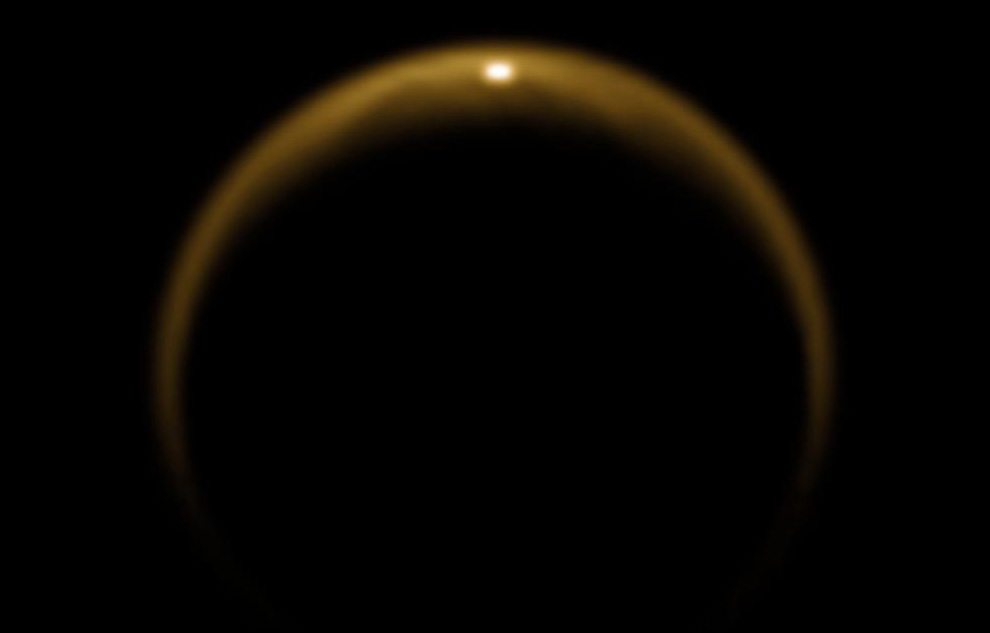 21
This image shows the first flash of sunlight reflected off a lake on Saturn's moon Titan, detected on on July 8, 2009. The glint off a mirror-like surface is known as a specular reflection, and it confirmed the presence of liquid in the moon's northern hemisphere, where lakes are more numerous and larger than those in the southern hemisphere. Cassini scientists were able to correlate the reflection to the southern shoreline of a Titan lake called Kraken Mare. The sprawling Kraken Mare covers about 400,000 sq km (150,000 sq mi). (NASA/JPL/SSI/University of Arizona/DLR) # 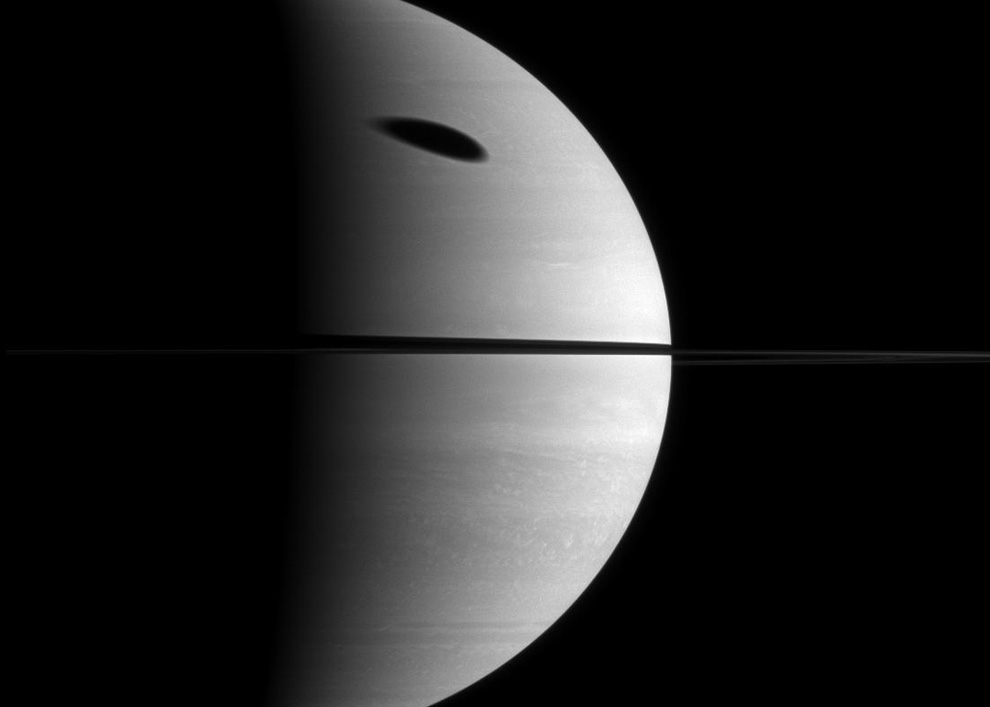 22
The shadow of Saturn's largest moon darkens a huge portion of the gas giant planet. Titan (5,150 km, or 3,200 mi across) is not pictured here, but its shadow is elongated across Saturn's upper atmosphere. The image was taken with the Cassini spacecraft wide-angle camera on November 7th, 2009 using a spectral filter sensitive to wavelengths of near-infrared light centered at 752 nanometers. The view was obtained at a distance of approximately 2.1 million km (1.3 million mi) from Saturn. (NASA/JPL/SSI) # 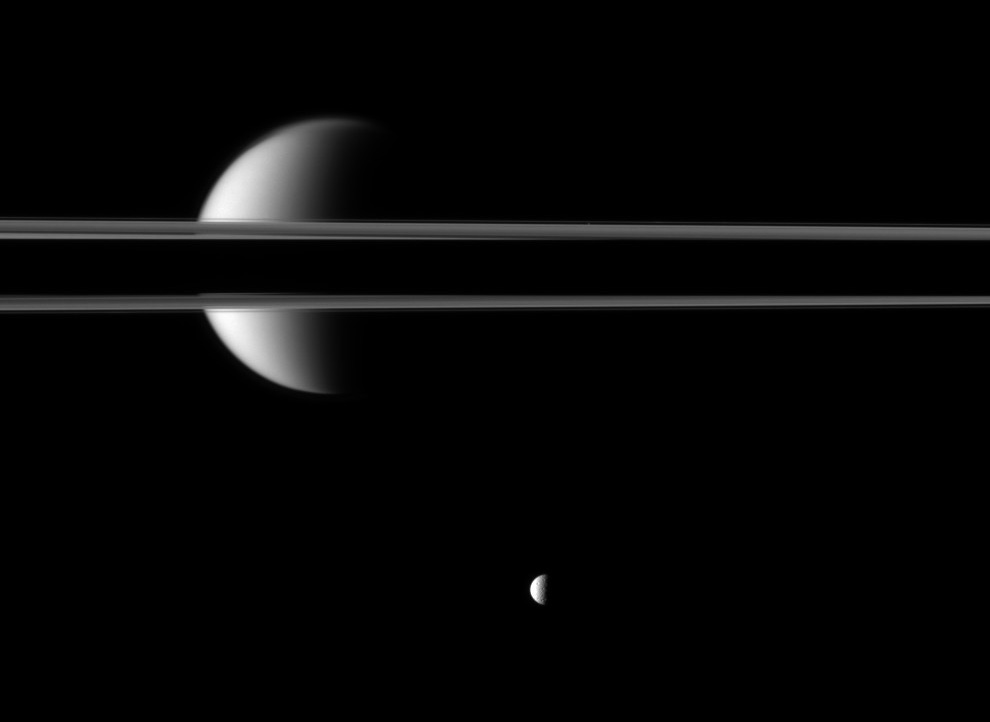 23
Saturn's rings, made dark in part as the planet casts its shadow across them, cut a striking figure before Saturn's largest moon, Titan. The night side of the planet is to the left, out of the frame of the image. Illuminated Titan can be seen above, below and through gaps in the rings. The moon Mimas (396 km, 246 mi across) is near the bottom of the image. Atlas (30 km, 19 mi across) can barely be detected near the thin F ring just above the center right of the image. (NASA/JPL/SSI) # 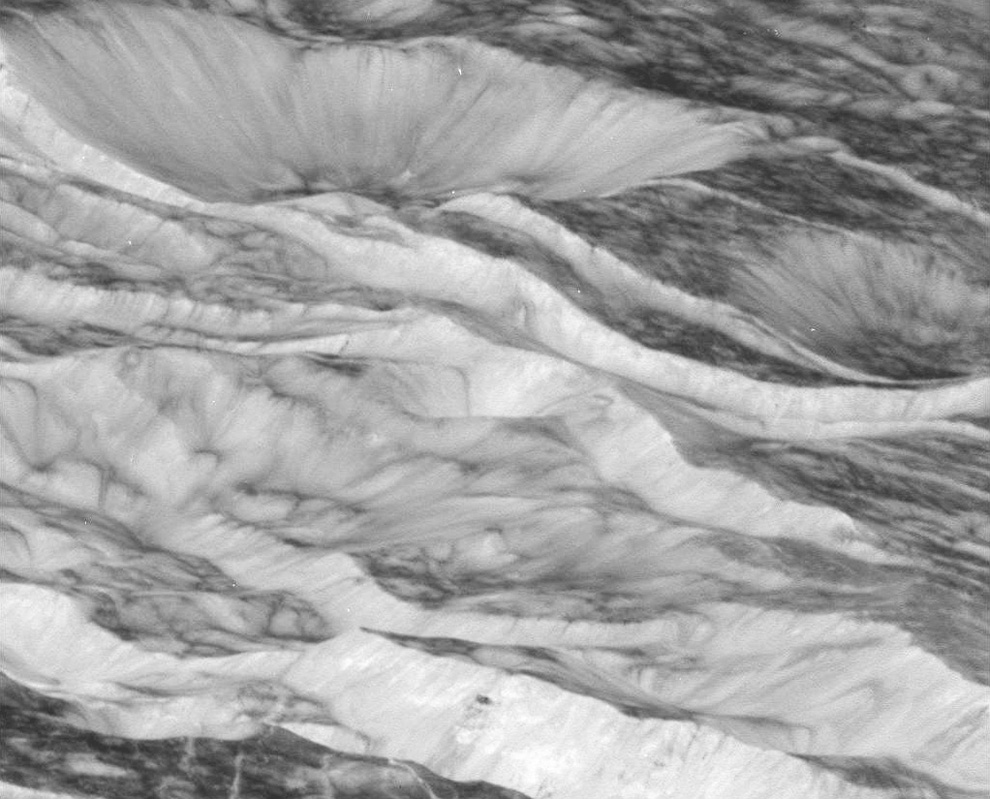 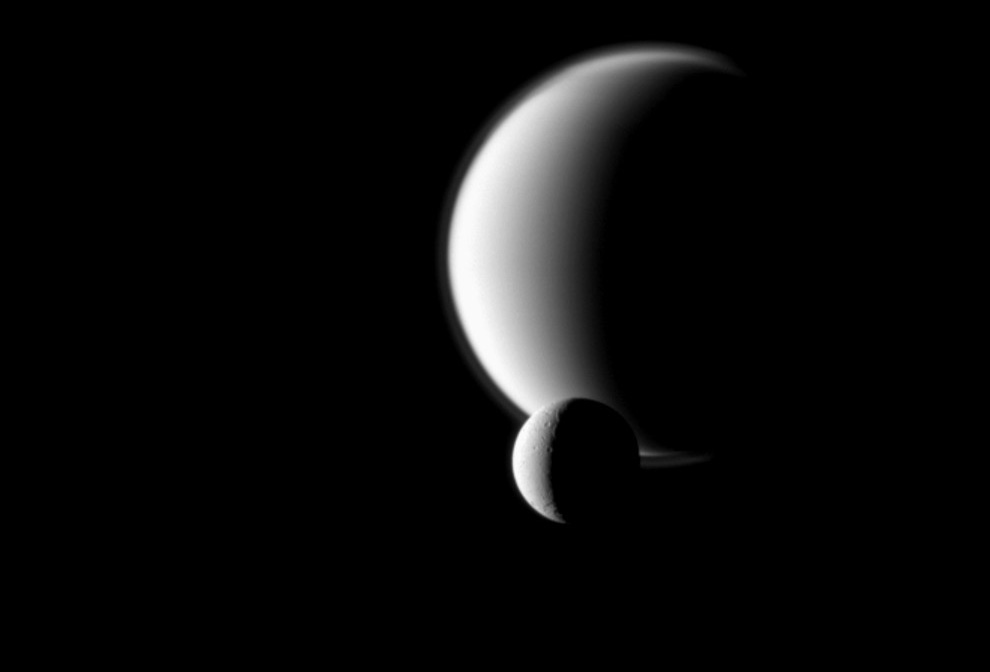 26
Saturn's moon Dione passes in front of the larger moon Titan, as seen from Cassini. The image was taken with the Cassini spacecraft narrow-angle camera on March 12, 2010. The view was obtained at a distance of approximately 2.2 million km (1.4 million mi) from Dione and 3.6 million km (2.2 million mi) from Titan. (NASA/JPL/SSI) # 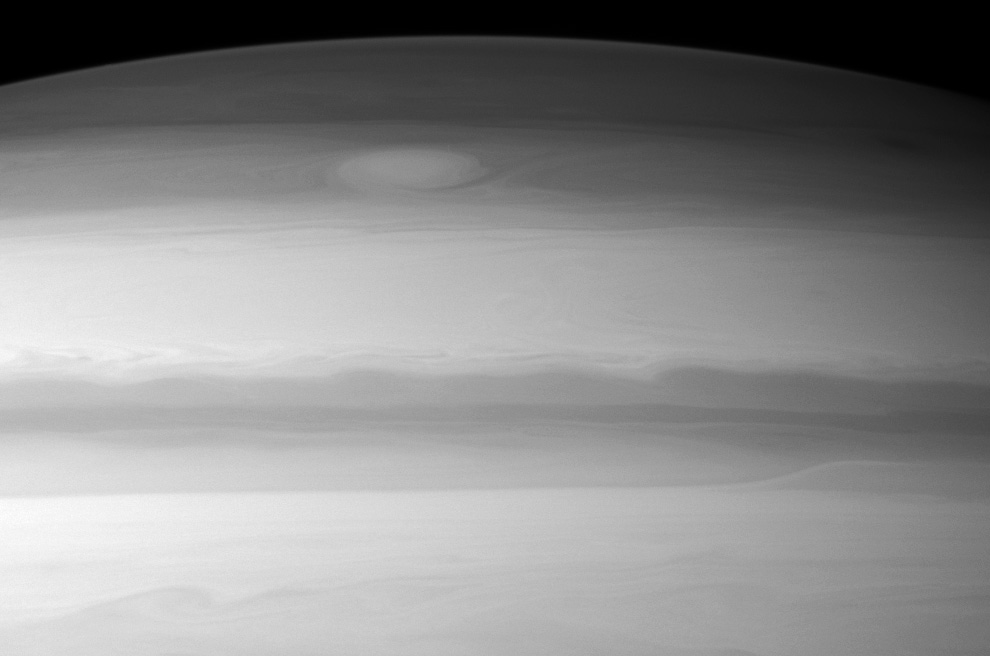 28
The moon Prometheus creates an intricate pattern of perturbation in Saturn's F ring while the moon Daphnis disturbs the A ring in this image taken after the planet's August 2009 equinox. Prometheus (86 km, or 53 mi across) can be seen between the thin F ring and the A ring in the middle left of the image. The gravity of potato-shaped Prometheus periodically creates streamer-channels in the F ring. Near the bottom of the image, Daphnis (8 km, or 5 mi across) can be seen creating edge waves in the Keeler Gap of the A ring. The moon has an inclined orbit and its gravitational pull perturbs the orbits of the particles of the A ring, forming the Keeler Gap's edge, and sculpts the edge into waves having both horizontal (radial) and out-of-plane components. Image acquired on Aug. 22, 2009 with a scale of 12 km (7 mi) per pixel. (NASA/JPL/SSI) # 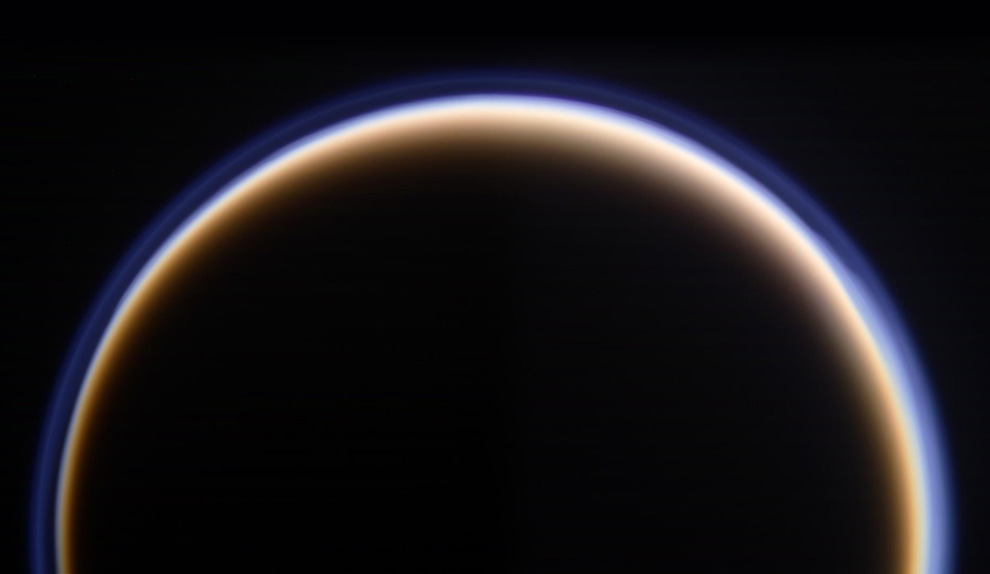 29
Titan's golden, smog-like atmosphere and complex layered hazes appear to Cassini as a luminous ring around the planet-sized moon. Images taken using red, blue and green spectral filters were combined to create this color view. Six images - two sets of three colors - were combined to create the mosaic. The images were acquired with the Cassini wide-angle camera on Oct. 12, 2009 at a distance of 145,000 km (90,000 mi) from Titan. (NASA/JPL/SSI) #

30
An aurora, shining high above the northern part of Saturn, moves from the night side to the day side of the planet in this movie recorded by Cassini. These observations, taken over four days, represent the first visible-light video of Saturn's auroras. They show tall auroral curtains, rapidly changing over time when viewed at the limb, or edge, of the planet's northern hemisphere. The sequence of images also reveals that Saturn's auroral curtains reach heights of more than 1,200 km (746 mi) above the planet's limb. These are the tallest known "northern lights" in the solar system. Each image was obtained with a two- or three-minute exposure, taken in visible light with the Cassini spacecraft's narrow-angle camera from October 5th to 8th 2009. (NASA/JPL/SSI) #