Indonesia, a sprawling country of contrasts is made up of 17,500 islands and populated by over 240 million people, and is home to the world's largest population of Muslims. Recent news stories from Indonesia include deadly mudslides, controversy over a statue of US President Barack Obama (who attended school there as a child), and stricter enforcement of Muslim sharia law, instituted in Aceh province, where a recently passed law bans women from wearing tight trousers. Collected here are a handful of recent images from places all around Indonesia. (36 photos total) 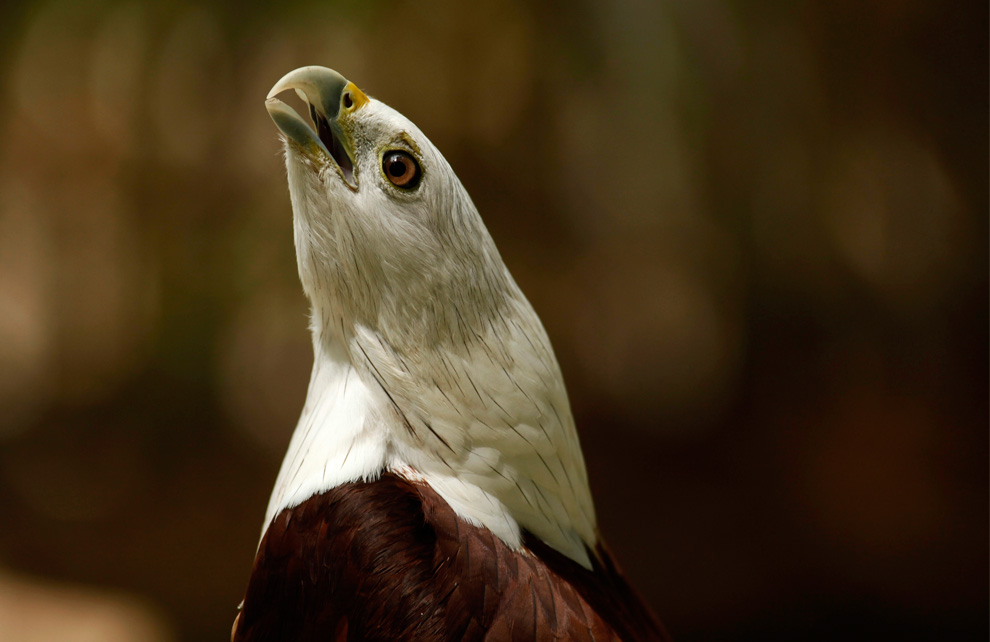 A Brahminy Kite (Haliastur indus), also known as the Red-backed Sea-eagle, stands inside a cage at Pulau Kotok bird rehabilitation centre in the Thousand Islands, north of Jakarta, Indonesia on January 27, 2010. The mascot of Indonesia's capital, Brahminy Kites are protected eagles and have been under threat in the Thousand Islands as they were captured and sold illegally as status symbols. (REUTERS/Beawiharta) 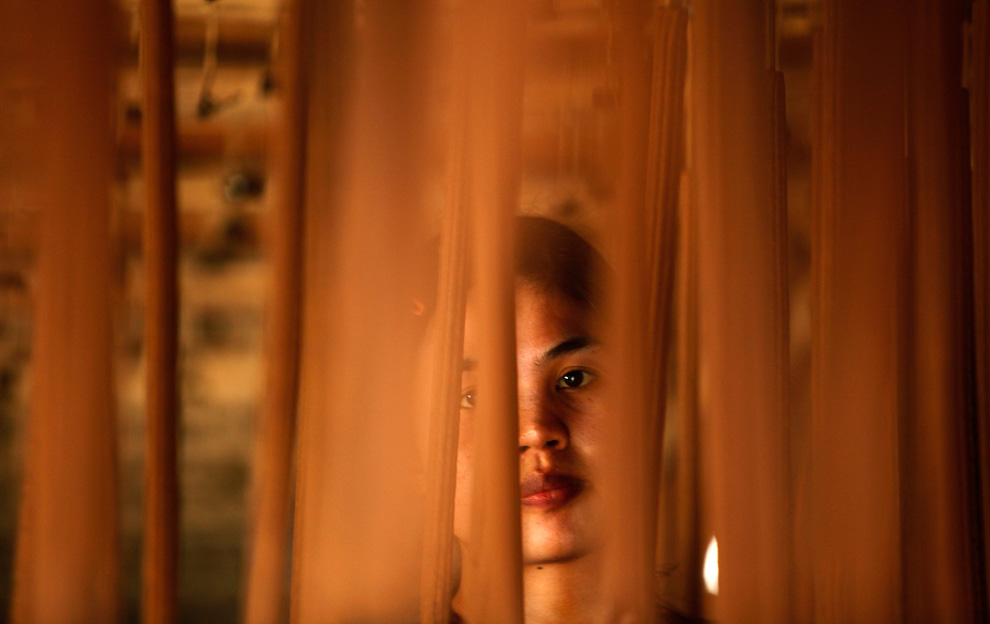 2
A worker looks through incense sticks during a drying process ahead of the Chinese Lunar New Year at an incense factory in Tangerang, Indonesia's Banten province February 8, 2010. (REUTERS/Beawiharta) #

3
Thousands of motorists sit stuck in the morning gridlock after a group of protesters blocked one of Jakarta's main roads on February 22, 2010. The number of motor vehicles including motorcycles in greater Jakarta has almost tripled in the past eight years to 9.52 million. Meanwhile road space has grown less than one percent annually since 2004, according to the Indonesian Transport Society. (BAY ISMOYO/AFP/Getty Images) # 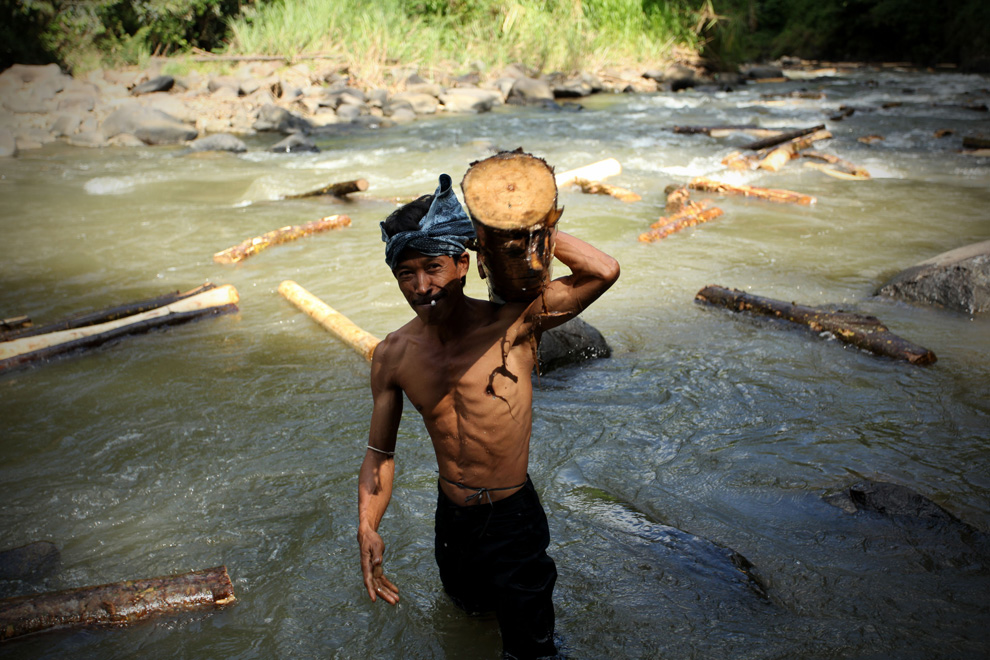 4
A member of the traditional Baduy (or Badui) tribe carries wood from the river to sell at their village in the forest area of the Kendeng mountains on February 7, 2010 in Banten, Indonesia. The traditional community consists of around 5,000-8,000 people spread across a hilly area of just 50 square kilometers. Their religion, known as Agama Sunda Wiwitan, combines elements of Hinduism, Buddhism and traditional beliefs, including various taboos such as not eating food at night, touching money, accepting gold or silver or even cutting their hair. (Ulet Ifansasti/Getty Images) # 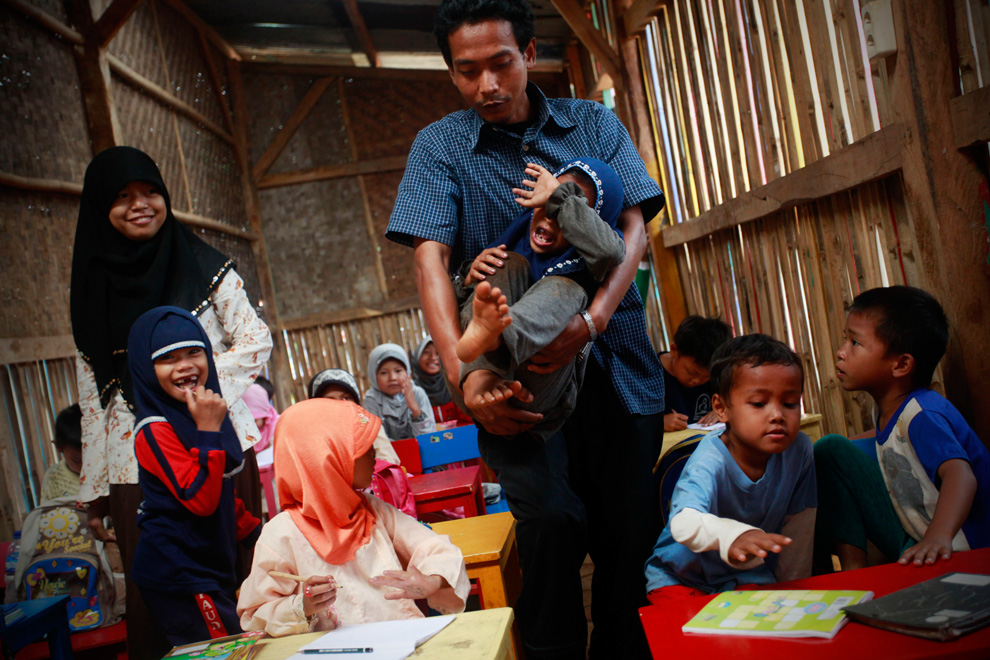 5
A teacher comforts a crying pupil at the temporary school in the Bantar Gebang landfill site, one of Jakarta's biggest dump sites, on January 26, 2010 in Jakarta, Indonesia. Children who live and work at the landfill site are schooled by day before going to help their parents scavenge and sell their finds after classes are over. Around 6,000 metric tons of garbage are dumped daily at the landfill site. (Ulet Ifansasti/Getty Images) # 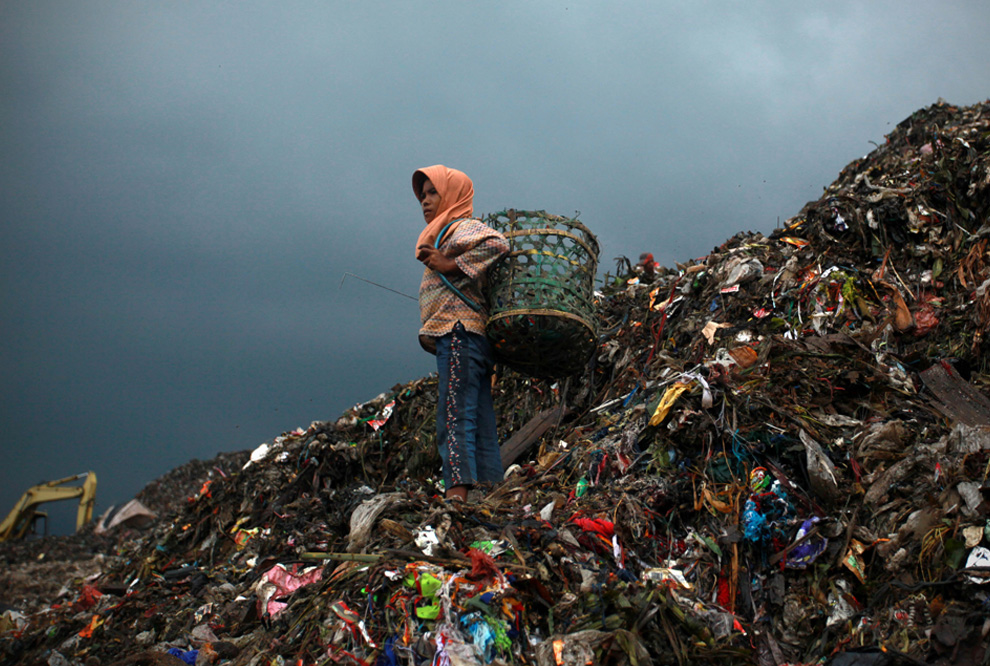 6
Eleven-year-old Nung stands on the mountain of rubbish where she will collect plastic, at the Bantar Gebang landfill site, one of Jakarta's biggest dump sites, on January 27, 2010. (Ulet Ifansasti/Getty Images) # 7
Young Ratna studies a map she found amongst the rubbish, while her brother, Basir separates the plastic he has collected at the Bantar Gebang landfill site, on January 26, 2010 in Jakarta, Indonesia. (Ulet Ifansasti/Getty Images) # 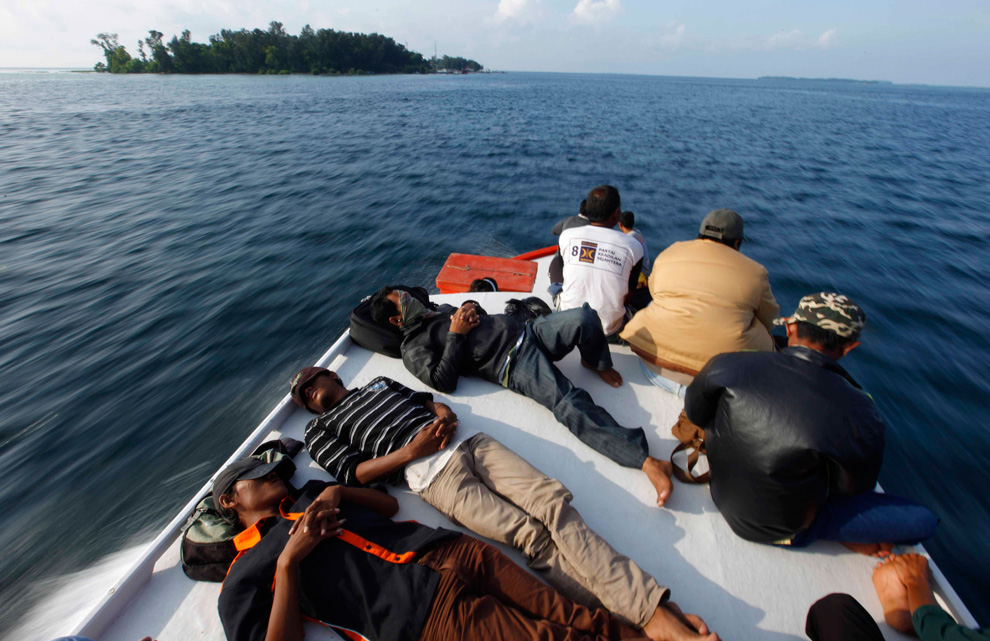 8
Workers sleep on the deck of a wooden ship as they travel to Jakarta for work from the Thousand Island district of Indonesia on January 27, 2010. The Thousand Islands district consists of about 105 small islands with around 30,000 inhabitants. (REUTERS/Beawiharta) # 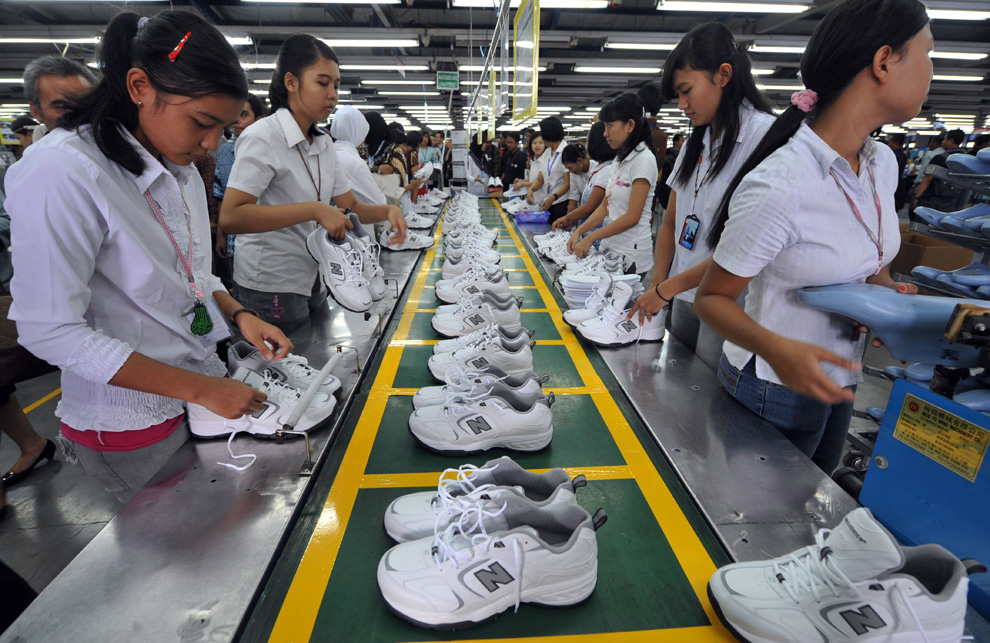 9
Workers attend a production line at a shoe factory in Tangerang on January 27, 2010. The Indonesian trade minister said that the local shoe industry was ready to compete with China as the free trade agreement between Association of Southeast Asian Nations (ASEAN) and China took full effect on January 1, 2010. (ADEK BERRY/AFP/Getty Images) #

10
An Indonesian police officer peeks through riot shields during an anti-government rally outside the presidential palace in Jakarta January 28, 2010. Thousands of anti-government protesters rallied on Thursday to mark the first 100 days of President Susilo Bambang Yudhoyono's second term. (REUTERS/Beawiharta) # 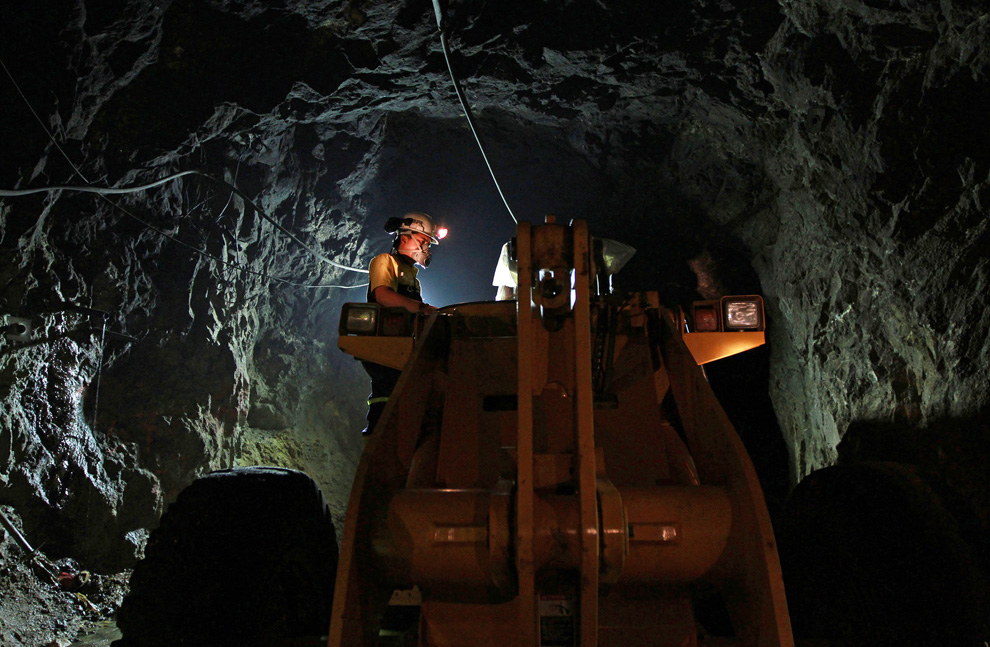 11
A technician repairs a tractor inside the PT Aneka Tambang gold mine in Pongkor, West Java, Indonesia, on Thursday, Jan. 28, 2010. (Dimas Ardian/Bloomberg) # 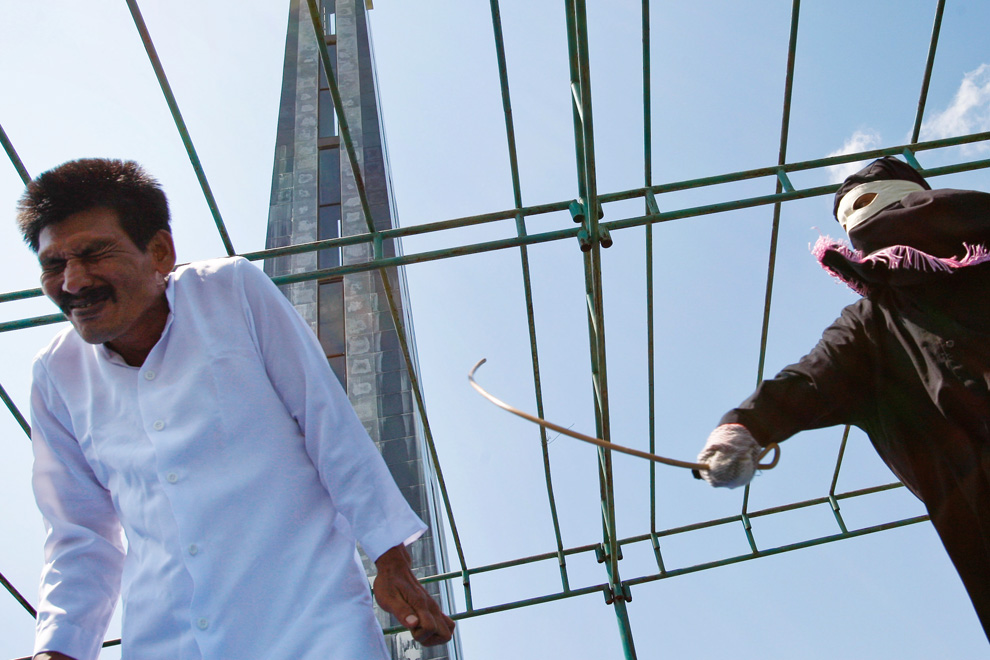 12
A man arrested for gambling is struck with a cane six times during a public caning at the compound of a mosque in Aceh Besar on January 29, 2010. The man was arrested for gambling while his three companions escaped. Aceh province has a special autonomy and it has defined itself as apart from the rest of Indonesia by implementing Shariah law and creating a religious police. (CHAIDEER MAHYUDDIN/AFP/Getty Images) # 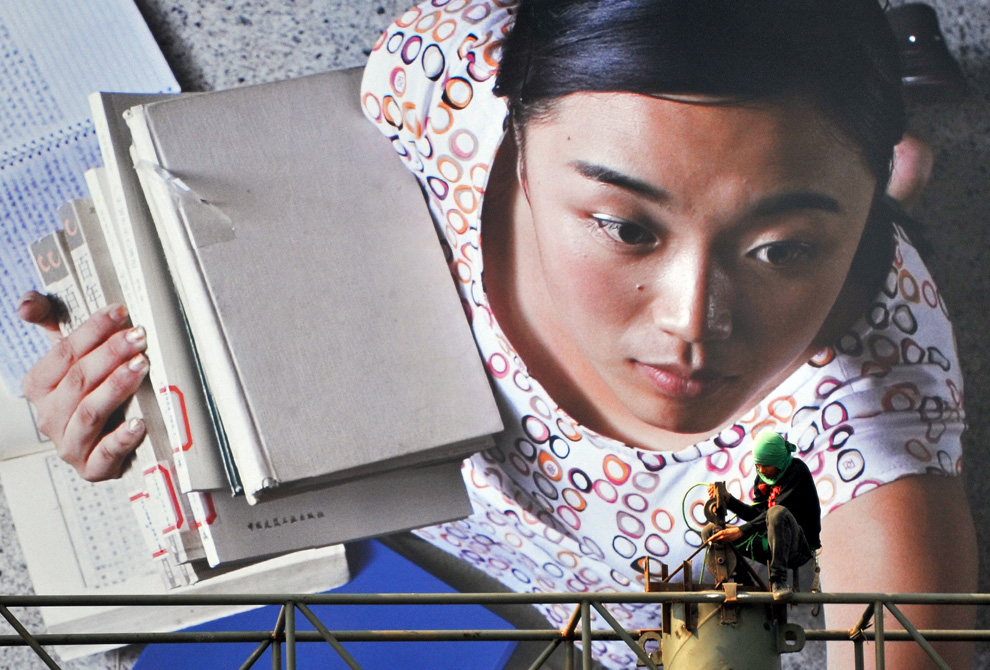 13
A laborer works on the top of an iron scaffolding next to a giant advertisement board in Jakarta on February 7, 2010. (BAY ISMOYO/AFP/Getty Images) # 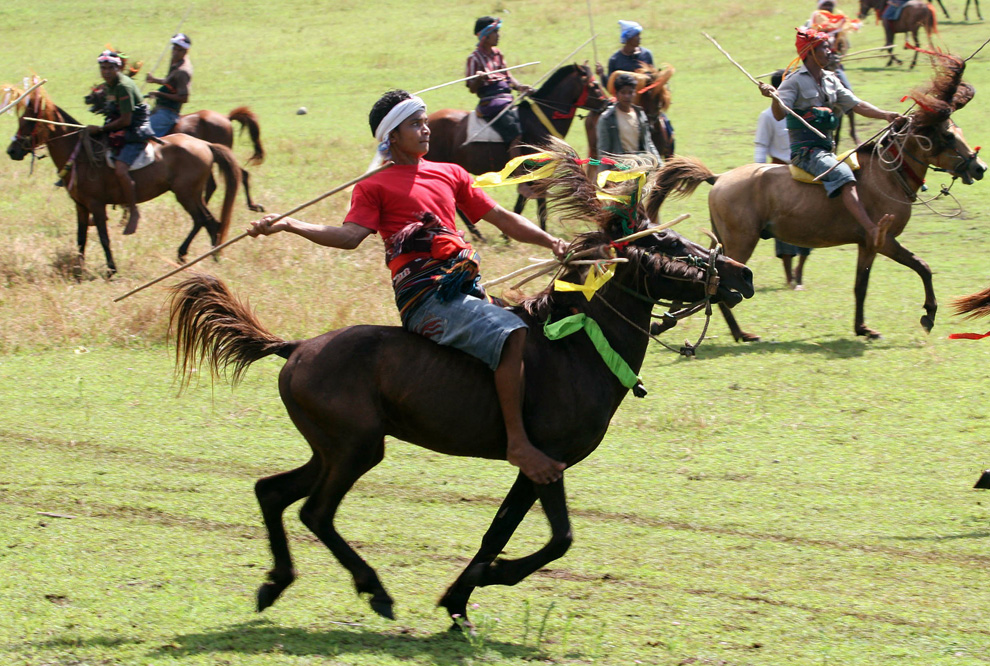 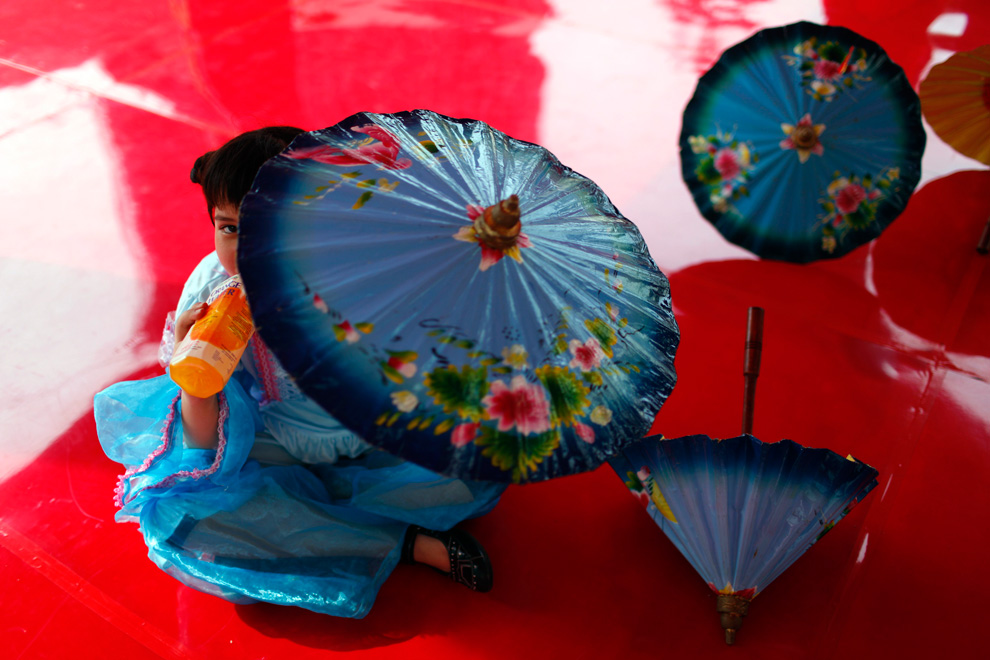 15
A child looks from behind her umbrella after a dance ahead of a Chinese Lunar New Year celebration in Jakarta, February 12, 2010. (REUTERS/Beawiharta) # 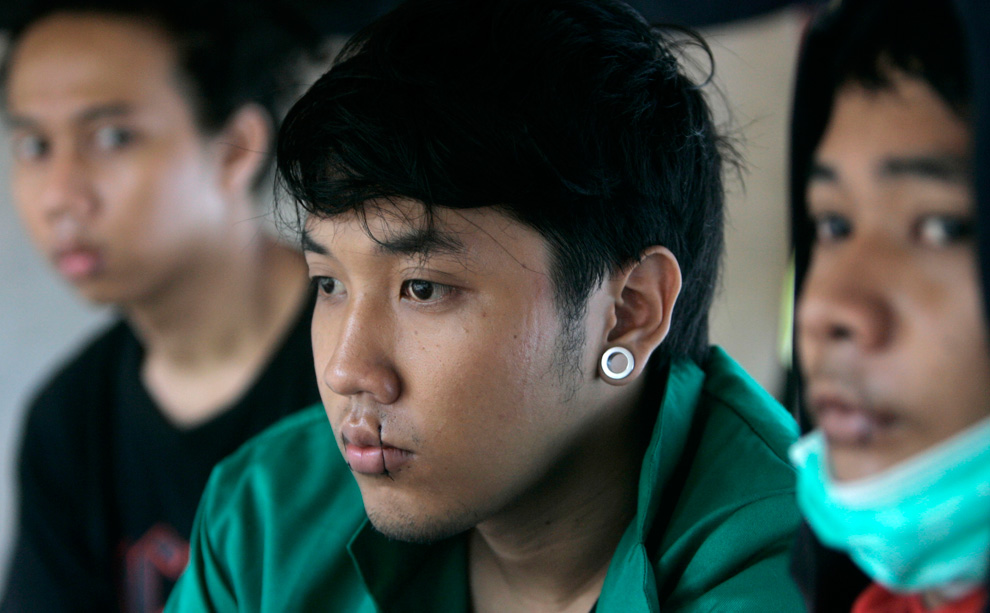 16
Three Indonesian students have their lips sewn together during a protest marking the 100th day since President Susilo Bambang Yudhoyono's swearing in for his second term, in Jakarta, Indonesia, Monday, Jan. 26, 2009. Student activists staged the protest demanding Yudhoyono to step down over his failure to lead the country to get out of the economic and political crisis. (AP Photo/Irwin Fedriansyah) # 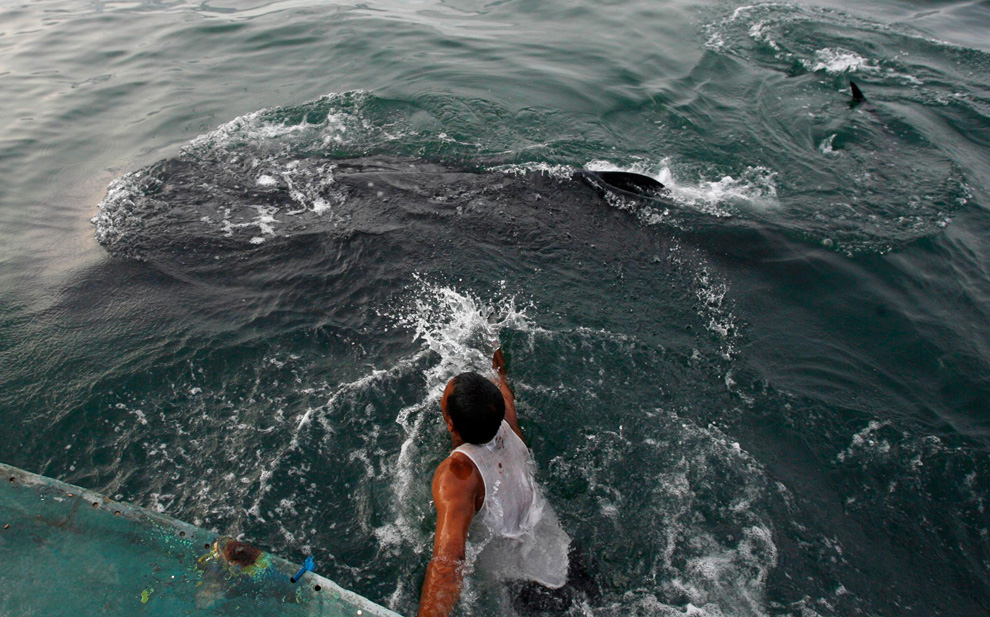 17
A fisherman tries to get close to a migrant whale shark from his wooden boat near Bentar beach in Probolinggo of Indonesia's East Java province February 4, 2010. (REUTERS/Sigit Pamungkas) # 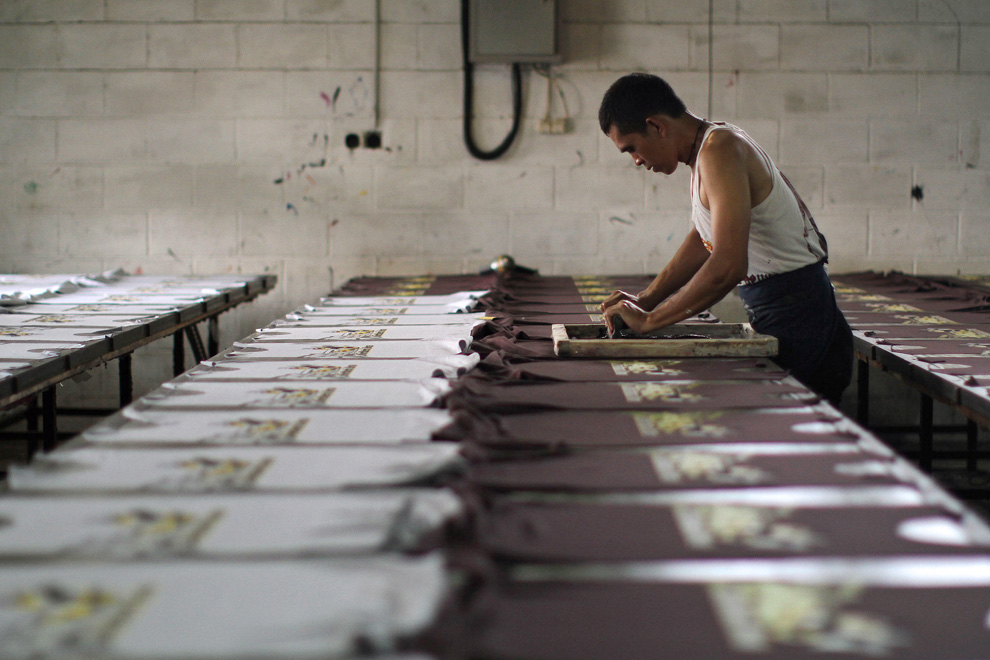 19
Tigers recently confiscated from the residence of an Indonesian businessman sit inside a cage at Animal Rescue Center run by Indonesian Forestry Ministry and Animal Sanctuary Trust Indonesia (ASTI) in Bogor, West Java, Indonesia, Monday, Feb. 22, 2010. Conservationists recently slammed a government plan that would allow Indonesians to keep endangered Sumatran tigers as pets if they give a $100,000 deposit and build a large enough enclosure. The tigers' DNA is currently being tested to determine their species. (AP Photo/Irwin Fedriansyah) # 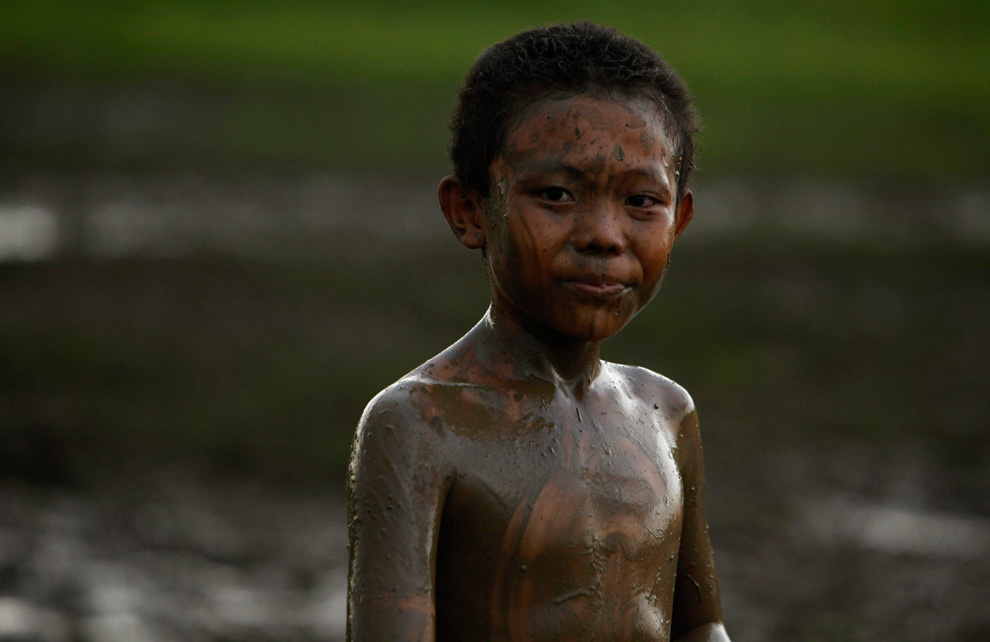 20
A boy smiles as he plays soccer in a paddy field in Karawang, in Indonesia's West Java province January 21, 2009. (REUTERS/Beawiharta) # 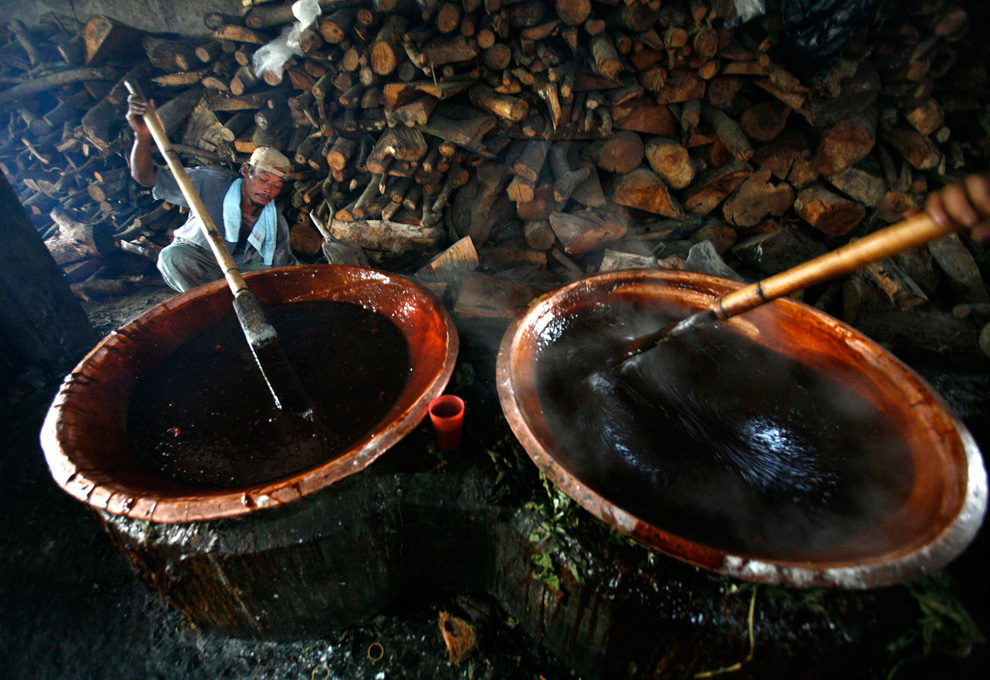 21
A worker cooks dodol on the wood stove in a home business in Tangerang, Banten province February 6, 2010. Dodol, which is made of sticky rice, coconut milk, and palm sugar, is a special delicacy sold during the Chinese New Year period in Indonesia. The business increases its production of dodol products by about 50 percent due to higher demand ahead of the celebration. (REUTERS/Supri) # 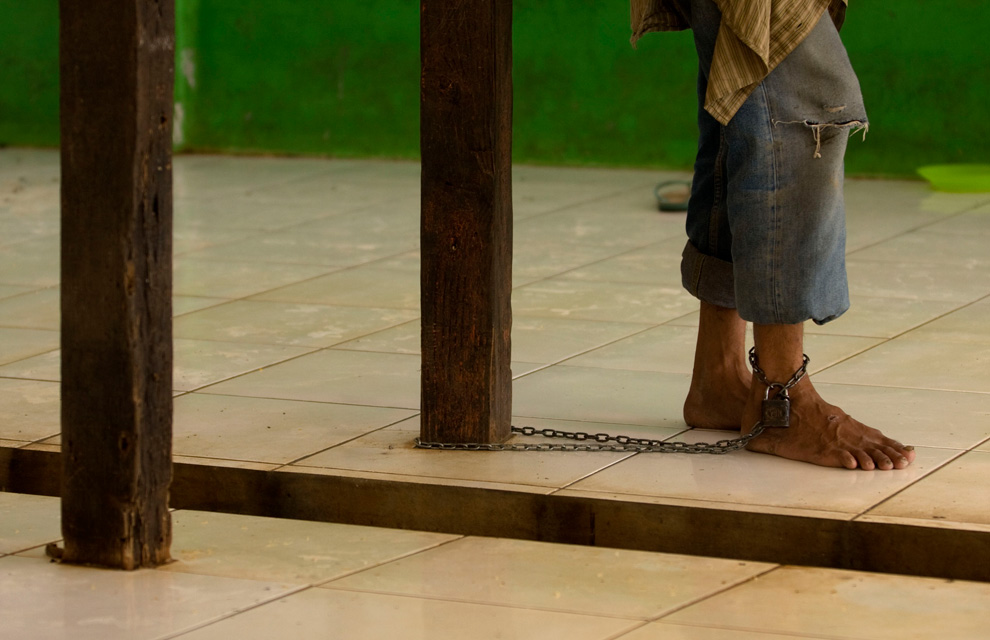 22
The leg of a patient is chained to a post at the Galuh foundation for people with mental health conditions on February 10, 2010 in Bekasi, Indonesia. Belief in black magic is commonplace in Indonesia, where there is much ignorance over mental health issues, with traditional healers instead consulted for apparent sufferers. 2007 figures suggested that 4.6% of the nation suffered from serious mental disorders in a country whose population now stands at around 230 million, with only around 700 psychiatrists across 48 psychiatric hospitals available to help treat those affected. (Ulet Ifansasti/Getty Images) #

23
A patient named Yoyo is bathed at the Galuh foundation for mental patients in East Bekasi near Jakarta on February 11, 2010 in Bekasi, Indonesia. With limited mental heatlth care available in Indonesia, sufferers usually turn to black magic and are taken to "dukuns" or healers who are believed to have magical powers. (Ulet Ifansasti/Getty Images) # 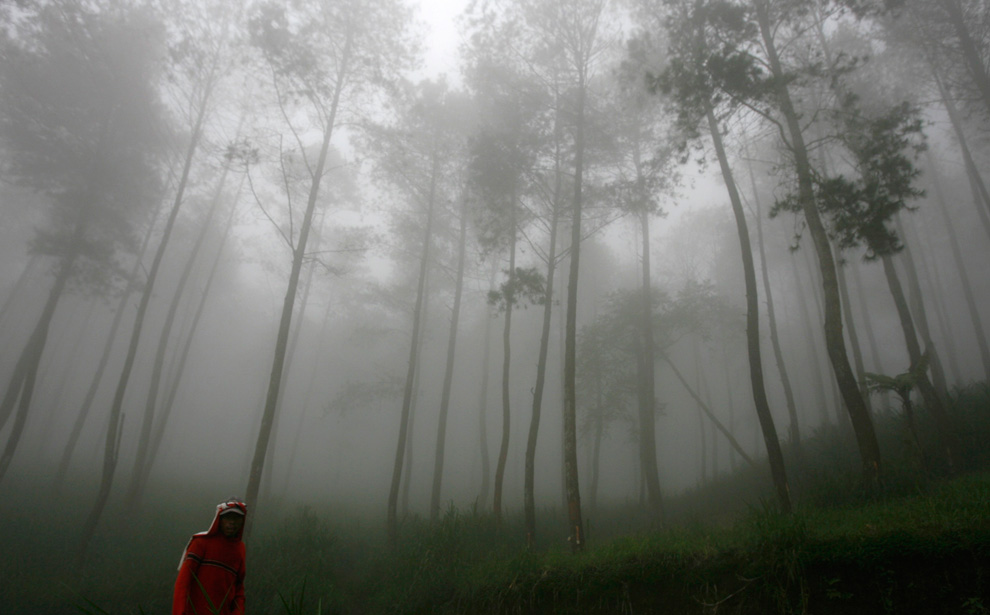 24
A villager stands at a protected forest area to collect grass for his livestock in Mojokerto, East Java province February 11, 2010. (REUTERS /Sigit Pamungkas) #

25
A worker stands on a steel rods at a construction site of Kuningan City superblock in Jakarta February 2, 2010. (REUTERS/Beawiharta) #

27
A young boy wades through floods in Jakarta on February 13, 2010. Thousands of residents took refuge after annual floods hit brink areas of the Ciliwung river caused by heavy rains in Bogor and Jakarta, according to local reports. (ADEK BERRY/AFP/Getty Images) #

28
An activist from the Center for Orangutan Protection (COP) dressed as a "Na'vi" character from James Cameron's movie "Avatar" participates in a protest against replacing forests with palm oil plantations, in Jakarta, Indonesia, Wednesday, Feb. 24, 2010. (AP Photo/Achmad Ibrahim) # 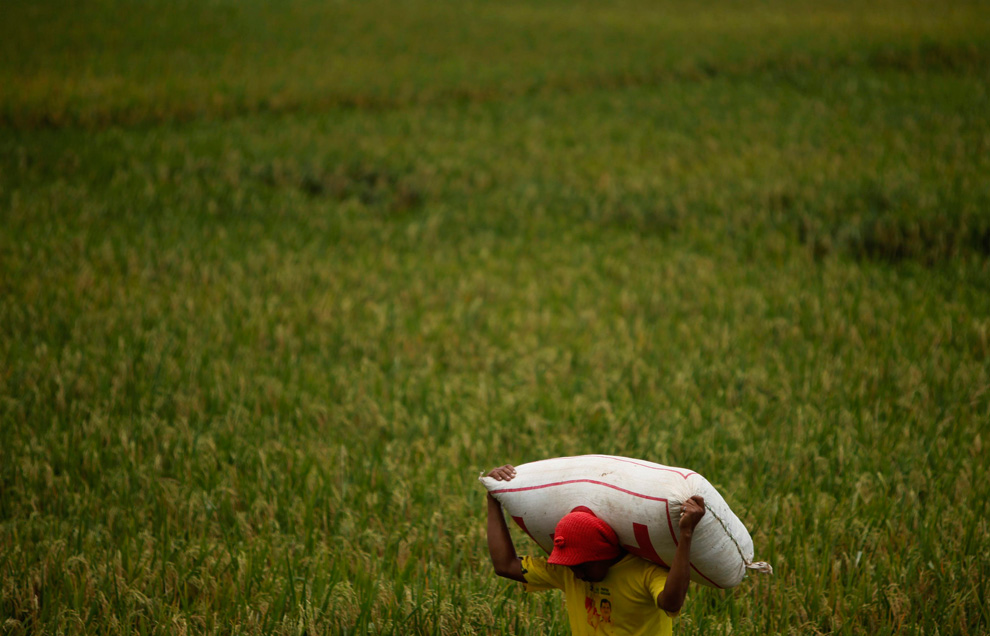 29
A worker carries a sack of rice at a paddy field in Karawang, in Indonesia's West Java province January 21, 2009. (REUTERS/Beawiharta) # 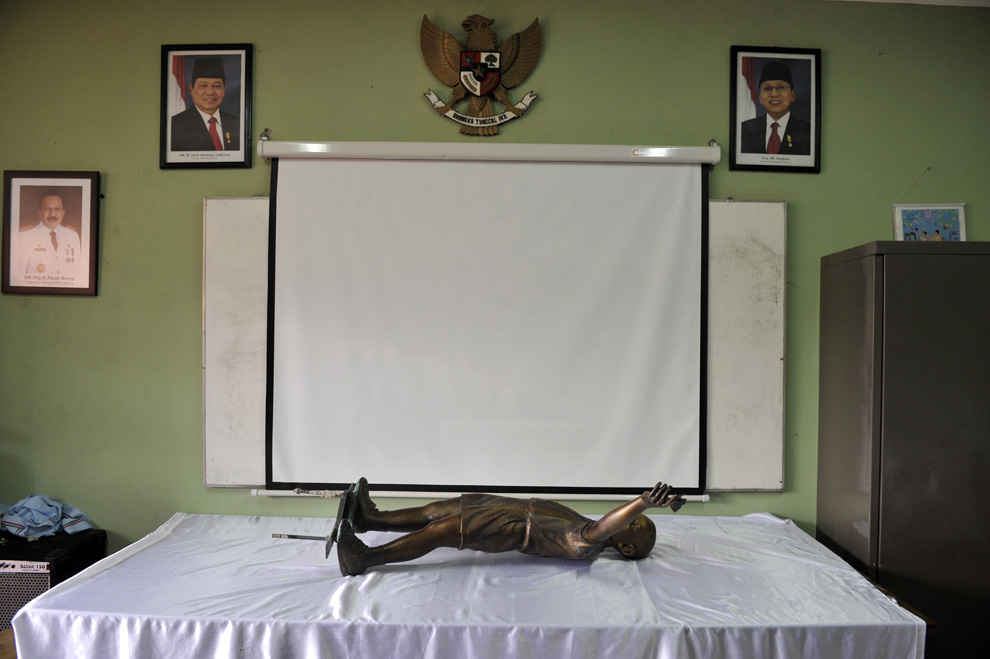 30
A bronze statue depicting US President Barack Obama as a boy with a butterfly on his finger is kept on a table in a classroom of the Menteng One primary school on February 16, 2010 as it awaits re-installation in the government school compound located in the affluent Menteng district in Jakarta where the young Obama attended in the late 1960's. The statue was removed from a nearby park following opposition by some groups. A portrait of Indonesian President Susilo Bambang Yudhoyono is seen at top left with Vice President Boediono at top right. (ROMEO GACAD/AFP/Getty Images) #

31
Workers process milkfish at a fish farm and hatchery near Pulau Pramuka in the Thousand Islands, north of Jakarta, February 18, 2010. The fish farm, which has a floating hatchery with an area of 3,000 square metres, produces more than 400 kilograms of boneless milkfish a day. (REUTERS/Beawiharta) # 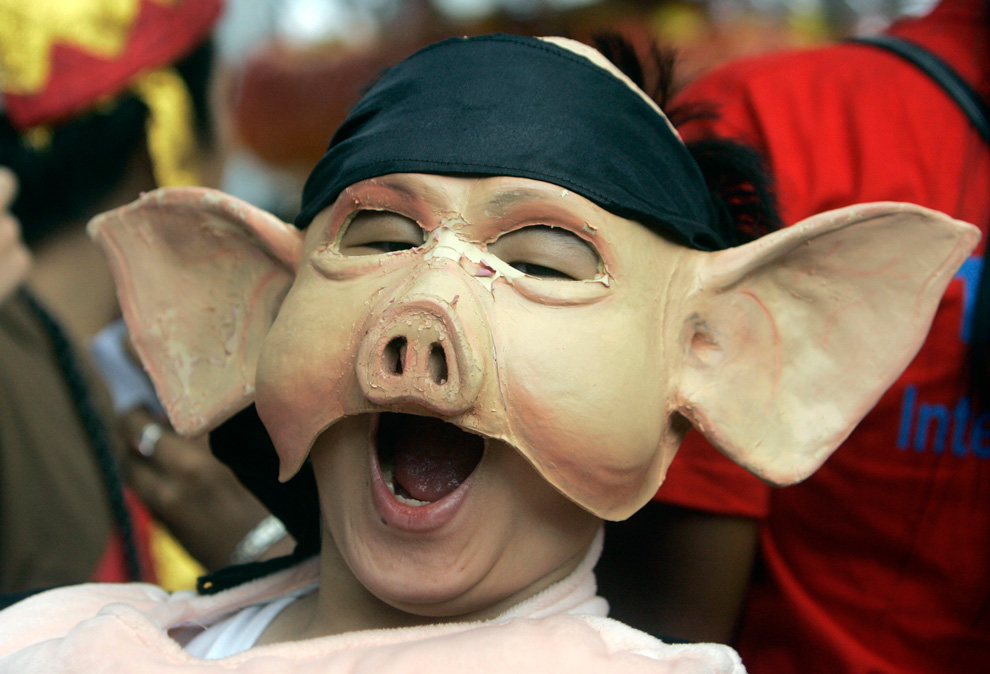 32
A student in pig suit yawns during a parade celebrating the upcoming Chinese New Year on a street in Jakarta, Indonesia, Friday, Feb. 12, 2010. (AP Photo/Irwin Fedriansyah) # 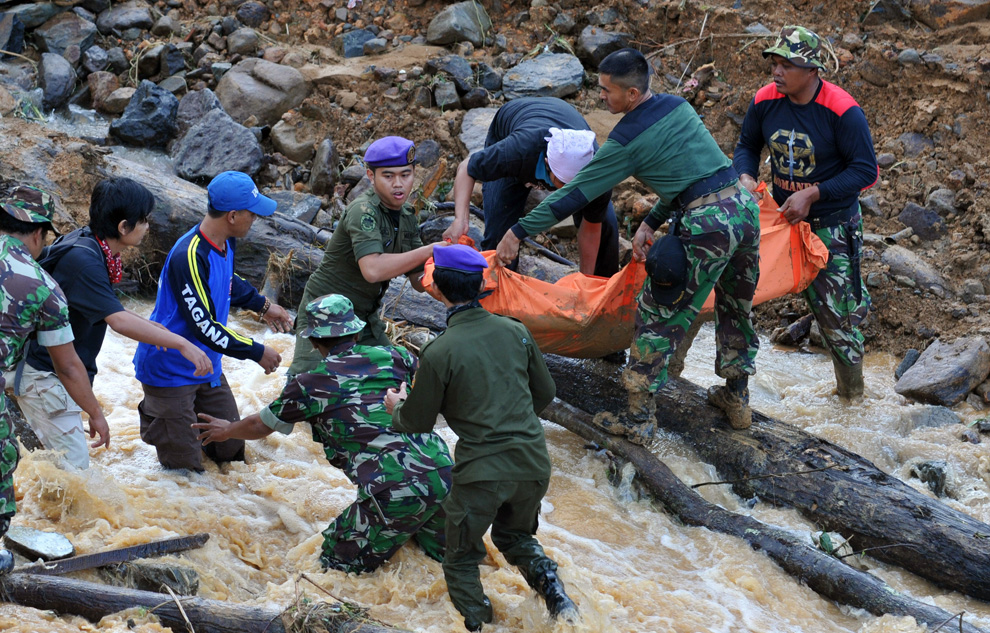 33
Rescuers carry a dead victim of a landslide at the Dewata village in Pasir Jambu, West Java, on February 24, 2010. Rescuers said that hopes were fading for more than 60 people missing after a landslide struck south of the capital Jakarta, killing at least seven people. (BAY ISMOYO/AFP/Getty Images) # 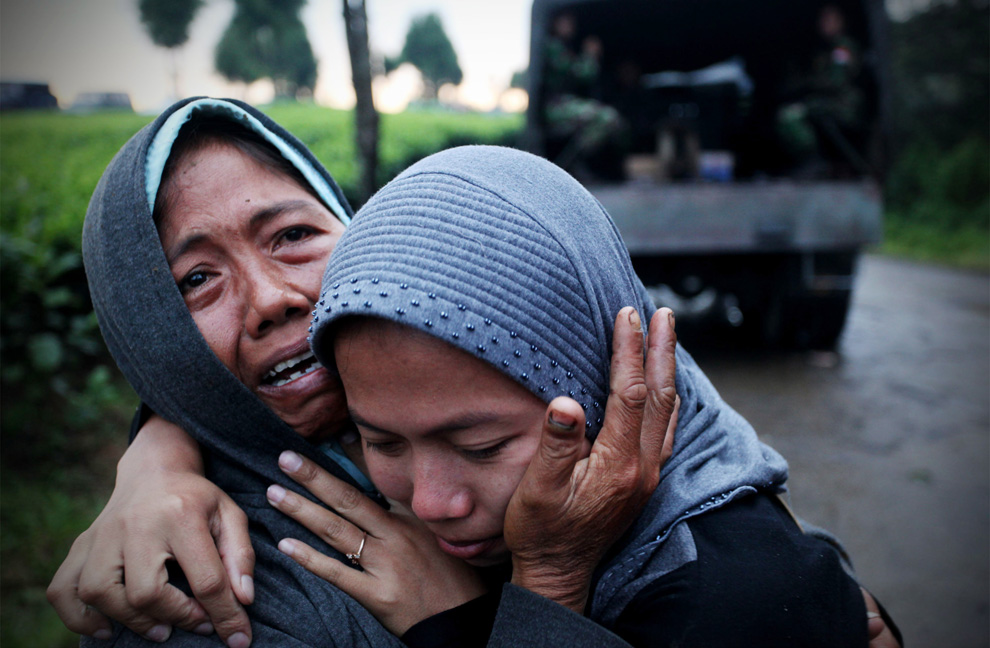 34
Villagers mourn the loss of relatives as the search continues for people buried under a landslide on February 24, 2010 in Dewata, West Java, Indonesia. A heavy rain caused a landslide that destroyed houses, factories and offices at a tea plantation. (Ulet Ifansasti/Getty Images) # 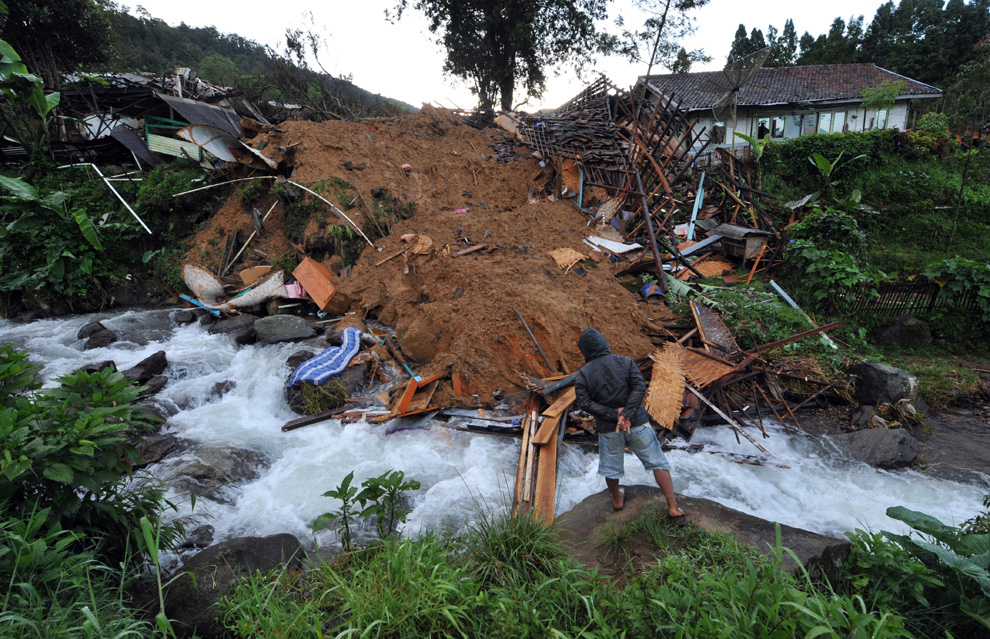 35
A villager looks at houses buried by a landslide at Dewata village in Pasir Jambu, West Java, on February 24, 2010. (BAY ISMOYO/AFP/Getty Images) #