Images from the Lunar Reconnaissance Orbiter

NASA's Lunar Reconnaissance Orbiter (LRO) was launched in June, 2009, and is currently orbiting the Moon around its poles at a low altitude of just 50 kilometers (31 miles). The primary objective of the LRO is to prepare for future lunar exploration, scouting for safe and compelling landing sites, potential resources (like water ice) and more. The high-quality imagery used in the mapping of the lunar surface is unprecedented, and a few early images have included detailed overviews of the landing sites of several Apollo missions, some 40 years after they took place. LRO is now on a one year mission, with possible extensions up to five years. Collected here are several recent LRO images, and a few then-and-now comparisons of Apollo landing sites. (18 photos total) 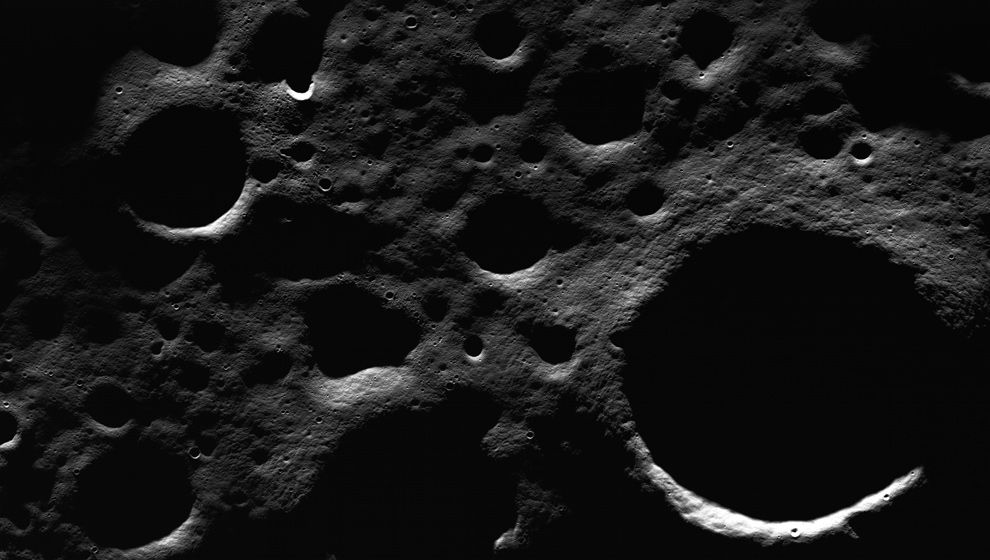 Near the lunar north pole, many craters on the floor of Peary crater experience permanent shadow inside, and some have permanent illumination on the higher crater rims. Peary is a key exploration site for future astronauts due its proximity to potential resources. Image height is 9 km (5.5 mi). Image acquired July 11th, 2009. More (NASA/GSFC/Arizona State University) 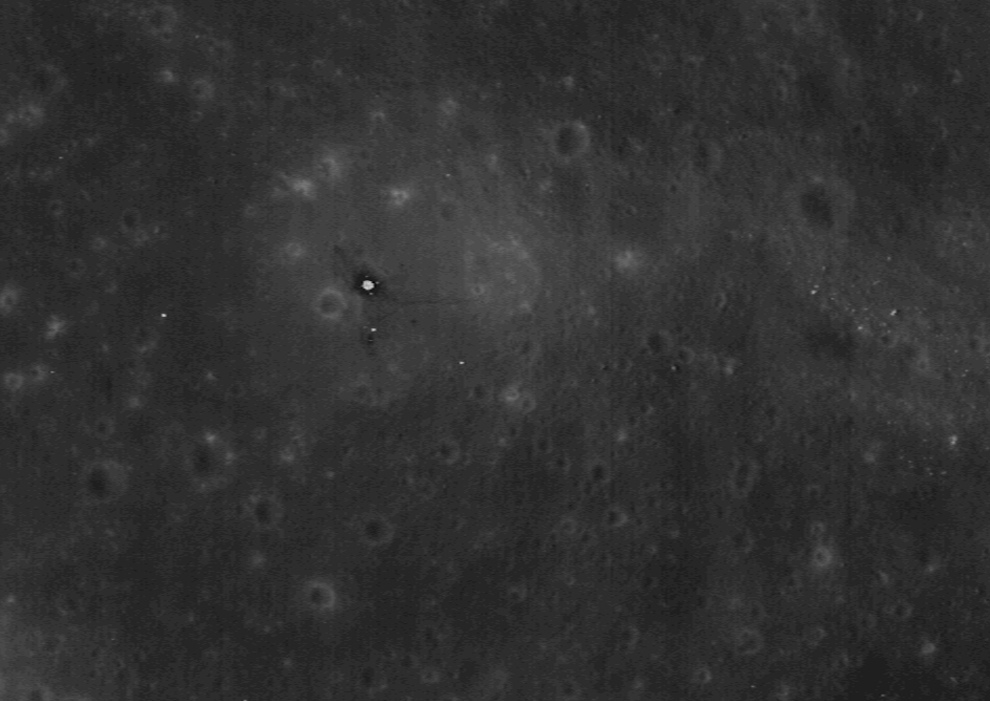 2
The site of the landing of Apollo 11, named "Tranquility Base", seen by LRO as it passed overhead on October 1st, 2009. On July 20th, 1969, NASA astronauts Neil Armstrong, and Edwin "Buzz" Aldrin landed on the surface of the moon for the first time, spending less than a day there, and only 2.5 hours exploring on foot. The large bright spot at center is the Lunar Module (LM) descent stage, its four foot pads barely visible. The dark halo around the LM is from the astronauts' heavy foot traffic. Several experiments can also be seen, and a trail leading to the right left by Armstrong as he trekked to Little West crater. More (NASA/GSFC/Arizona State University) # 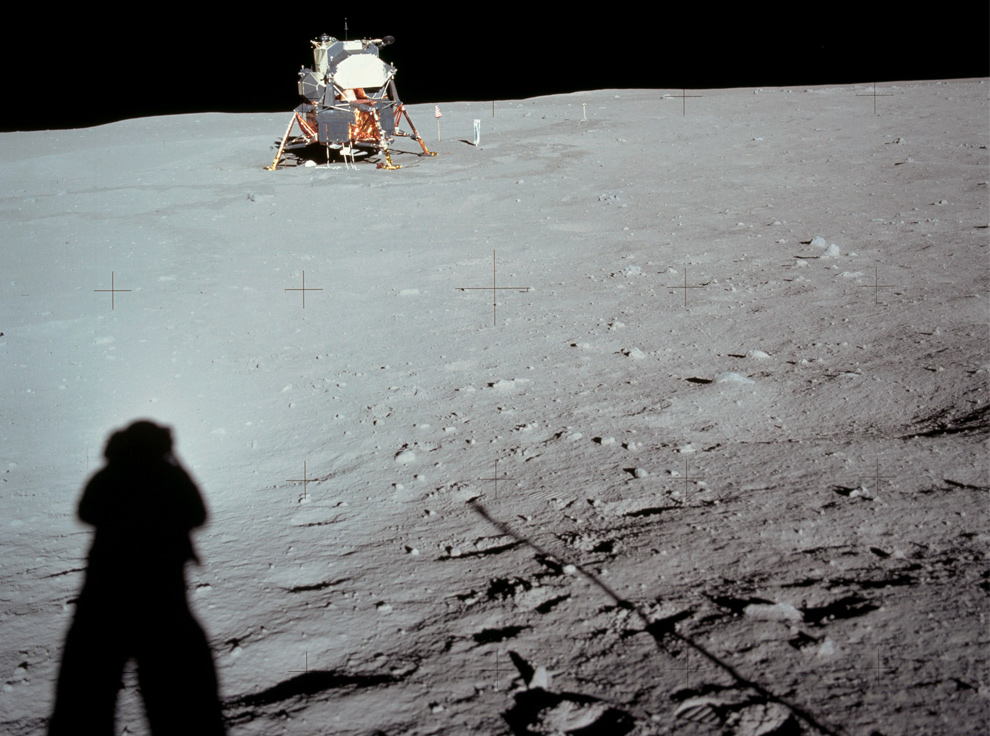 3
On July 20th, 1969, NASA astronaut Neil Armstrong looks back at the Apollo 11 Lunar Module from Little West crater - oriented to the previous overhead photo, Armstrong would be standing in the center, looking to the left. (NASA) # 4
Looking the opposite direction as the previous photo, also on July 20th, 1969, NASA astronaut Neil Armstrong snapped this panorama of an experiment placed near Little West crater. (NASA) # 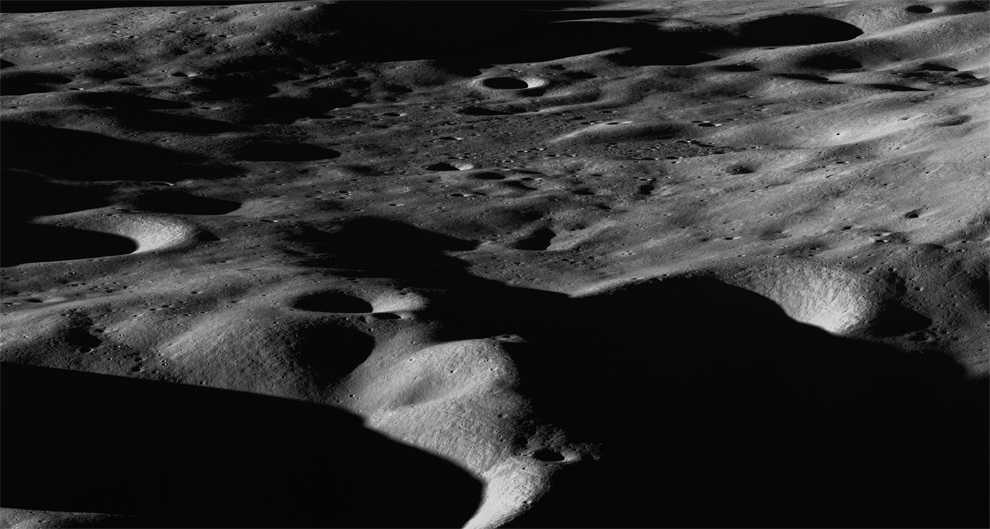 5
Two and a half days after NASA's earlier LCROSS experiment impacted the lunar surface searching for water, the LRO spacecraft slewed towards Cabeus crater near the Moon's south pole, to acquire an overview image of a portion of the northern rim from the southwest on October 11th, 2009. The distance from left to right is about 60 km (37 mi) and from foreground to background in the center is about 50 km (31 mi). The LCROSS impact was just off the bottom center of the panorama. More (NASA/GSFC/Arizona State University) # 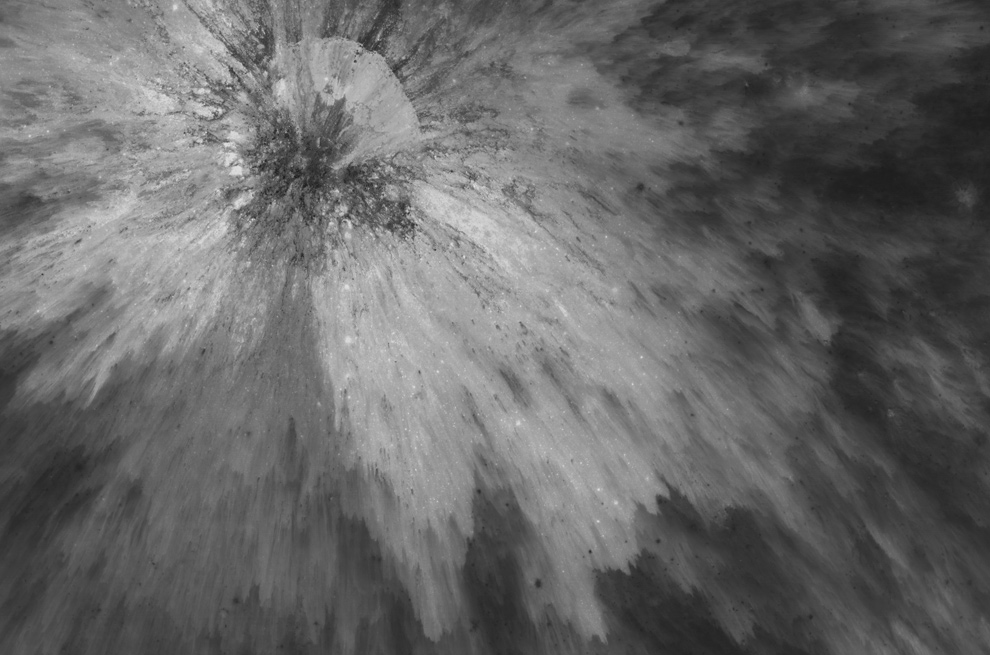 6
On September 30, 2009, LRO took this photo of a spectacular field of ejecta from a fresh impact crater south of Mare Tranquillitatis. The height of the image covers about 2.5 km (1.5 mi). More (NASA/GSFC/Arizona State University) # 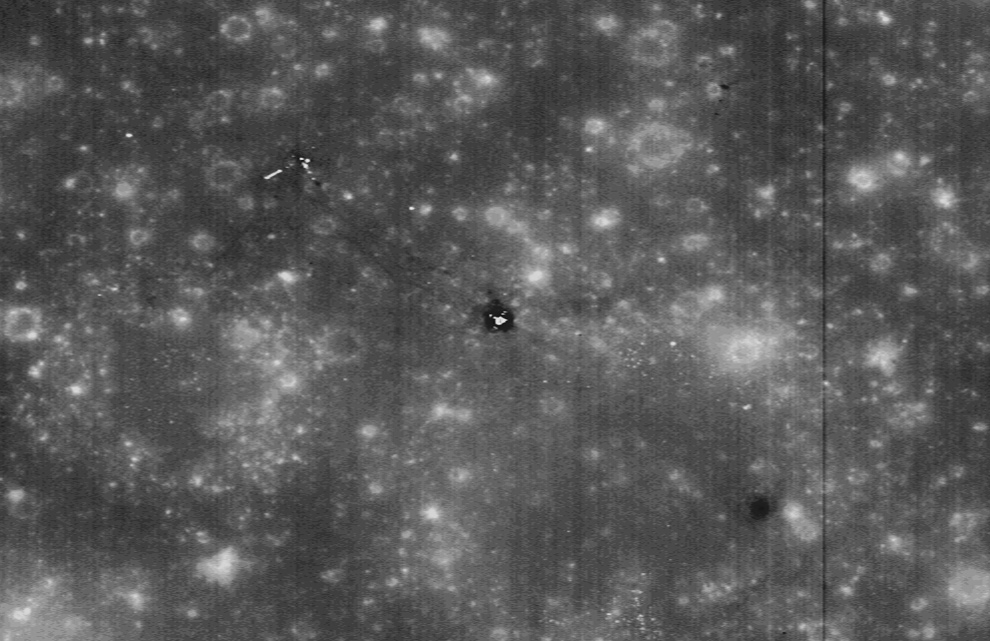 7
The Apollo 12 landing site in Oceanus Procellarum, as imaged from the LRO mapping orbit on October 5th, 2009. On November 19, 1969, NASA astronauts Pete Conrad and Alan Bean landed on the Moon, setting their Lunar Module (center) down within walking distance of NASA's Surveyor 3 lunar lander probe. Surveyor 3 had landed two years earlier in the dark smudge at lower right. The tracks leading to the upper left end at a large package of experiments left there called the Apollo Lunar Surface Experiments Package, or ALSEP. More (NASA/GSFC/Arizona State University) # 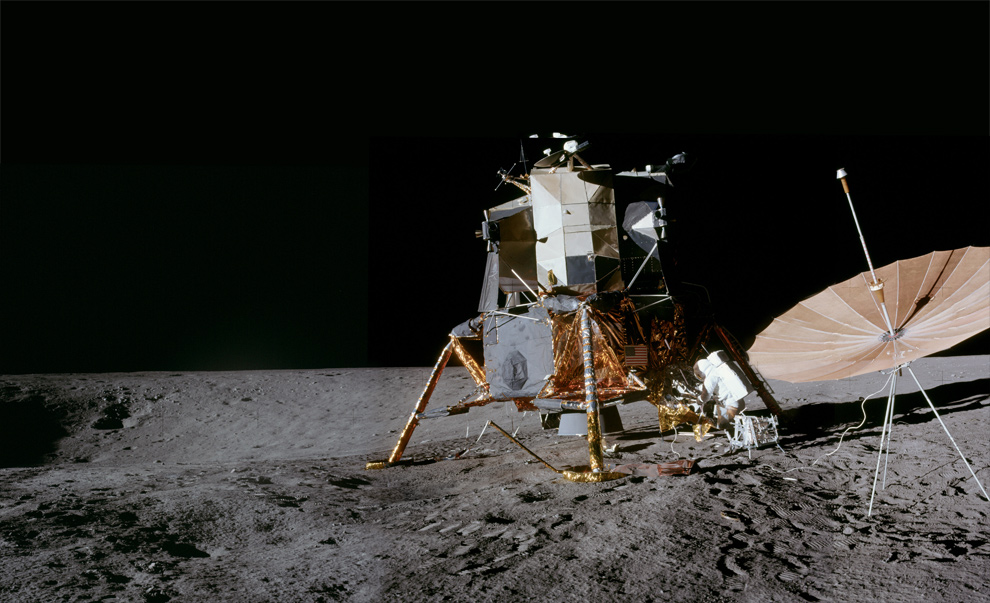 8
On November 19, 1969, astronaut Alan Bean captured this panorama of the Apollo 12 landing site, with Pete Conrad attending to the LM, and Surveyor crater to the left. Oriented to the previous overhead photo, this would be looking down and to the right from top center. (NASA) # 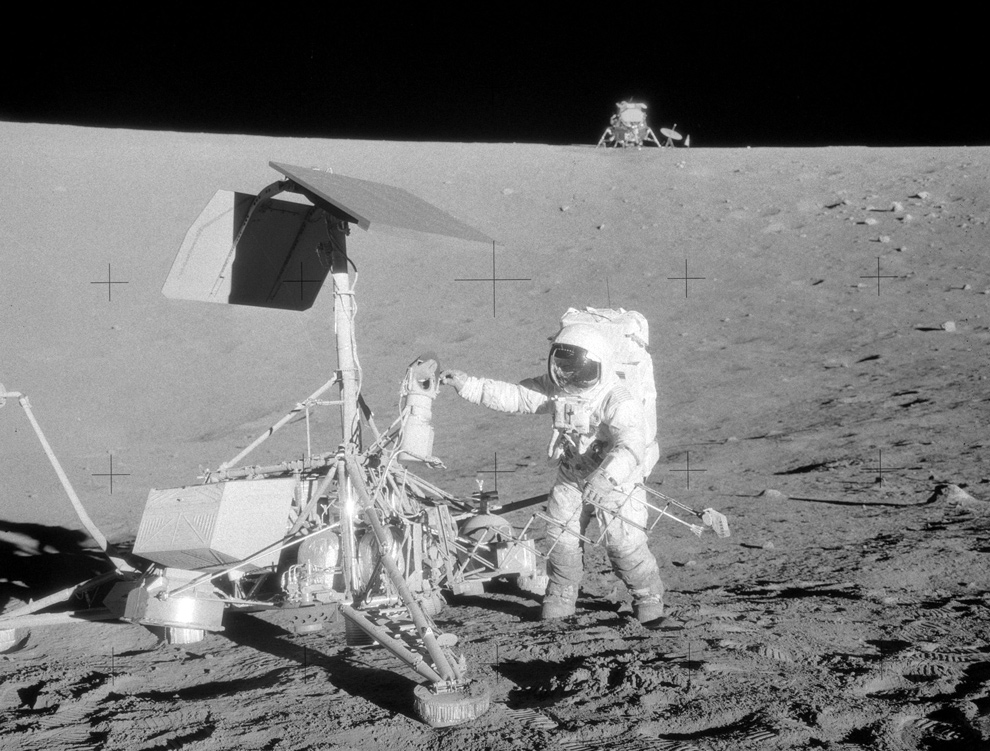 9
Astronaut Pete Conrad next to the Surveyor III lander on November 20, 1969, the Lunar Module in the background. Oriented to the above overhead photo of the site, this would be looking toward the top left from the bottom right. Pieces of the lander were removed and returned to Earth after spending two years on the lunar surface. (NASA) # 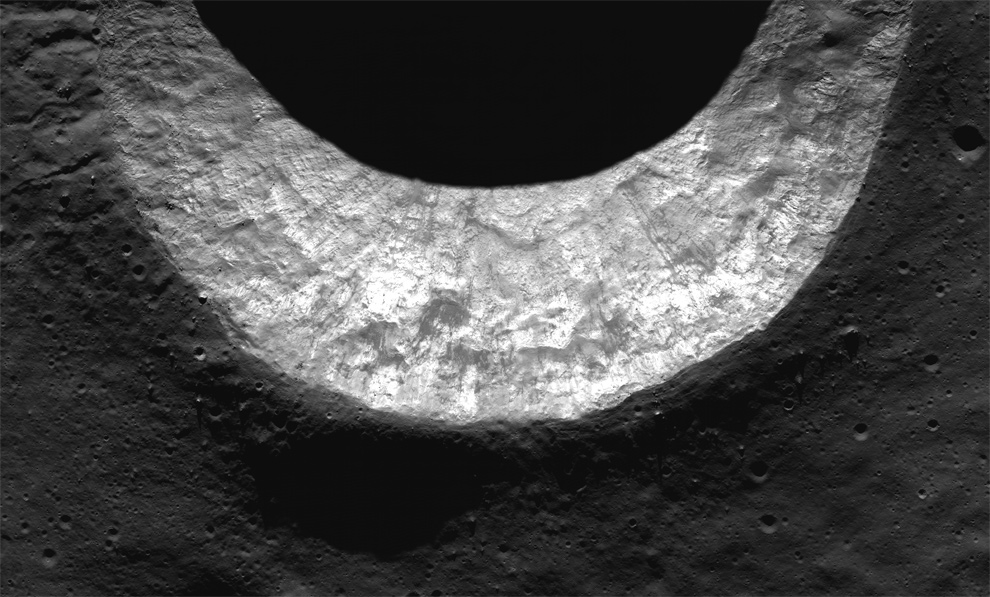 10
The inner rim of Milichius A crater in Mare Insularum, imaged by LRO on July 16th, 2009. Milichius A is approximately 9 km (5.6 mi) in diameter. More (NASA/GSFC/Arizona State University) # 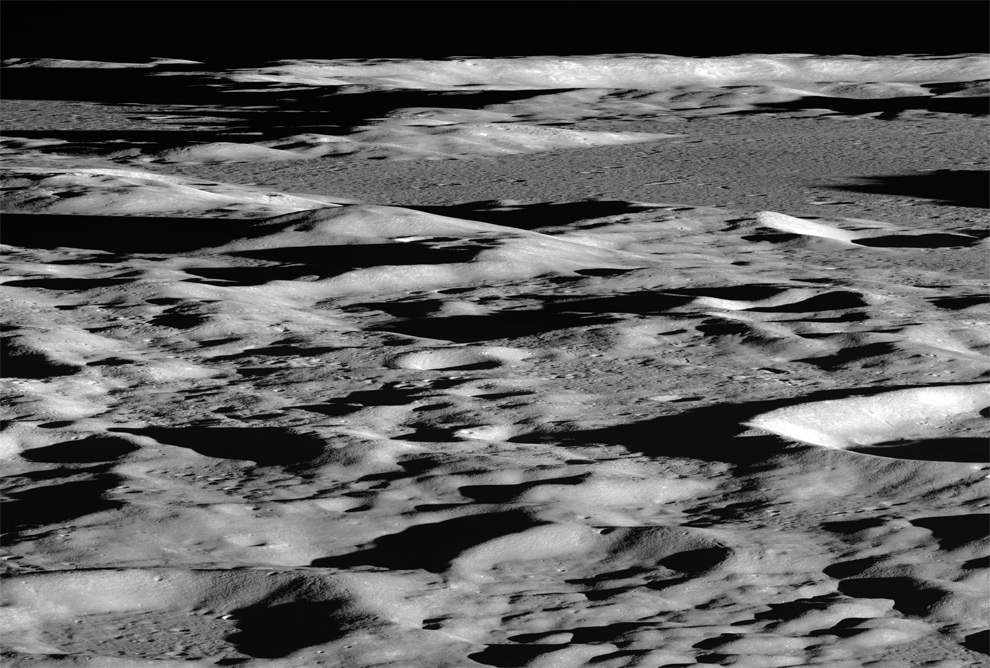 11
Looking across the limb of the Moon, LRO took this photograph as part of an image quality test shortly after entering its final mapping orbit on September 5th, 2009. The view is centered in the lunar highlands over 450 km northwest of Mare Humboldtianum at approximately 65.5°N, 55.6°E. More (NASA/GSFC/Arizona State University) #

12
A portion of a larger image of the eastern rim of Rozhdestvenskiy W crater at sunrise, showing the surface in stark relief on July 4th, 2009. More (NASA/GSFC/Arizona State University) # 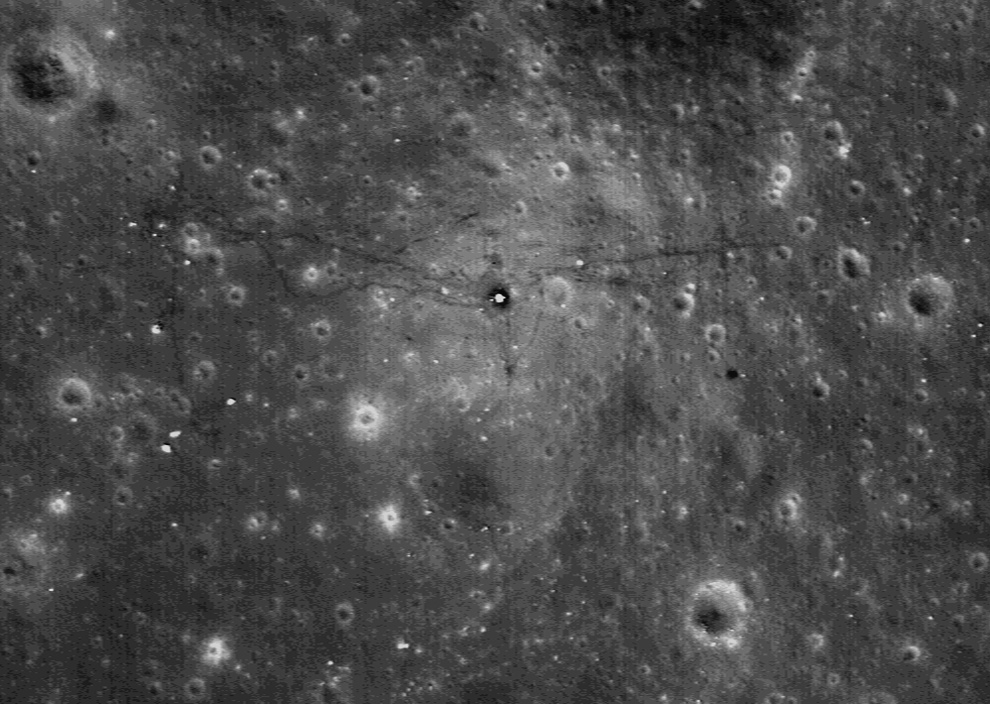 13
This LRO image of the Apollo 17 landing site was acquired on October 1st, 2009. On December 11th, 1972, Apollo 17 touched down on the sixth and final lunar landing mission of the Apollo program. NASA astronauts Eugene Cernan and Harrison Schmitt spent over 3 days on the surface, setting up experiments and roaming around in their lunar rover over 4 separate EVAs. The Challenger descent stage is visible at center, surrounded by trails made by astronaut feet and the wheels of the lunar rover. The rover itself sits still, parked at center right (dark spot). The white spots at left are the many ALSEP experiments left there as well. More (NASA/GSFC/Arizona State University) # 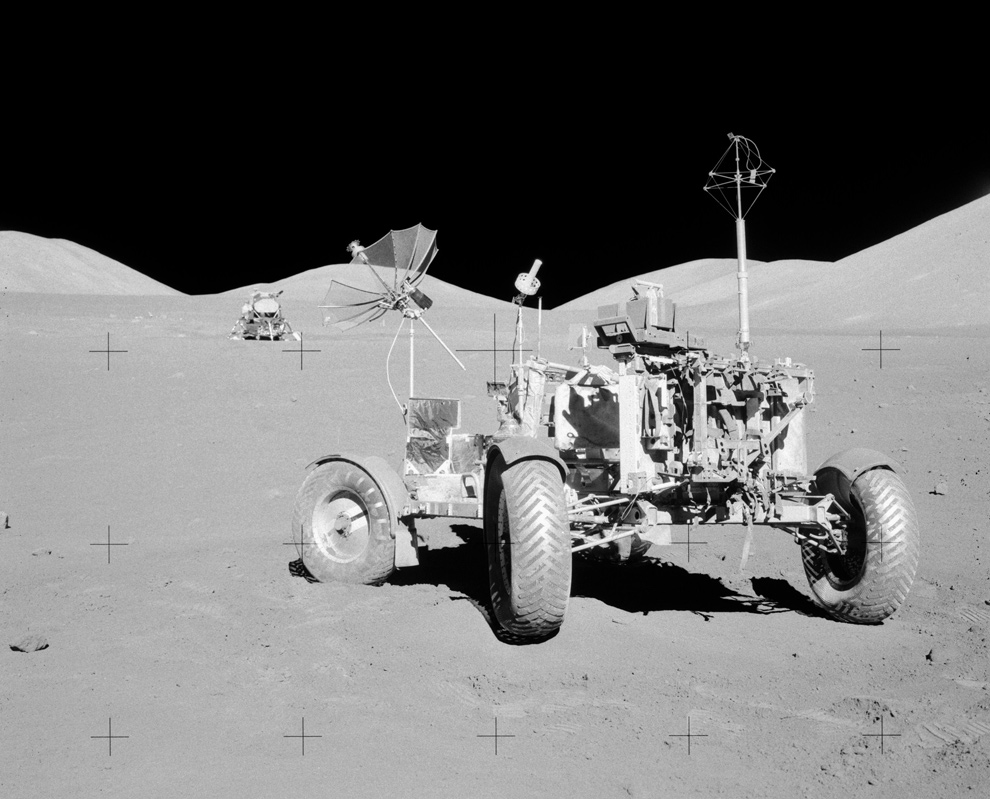 14
The lunar rover for Apollo 17, called the LRV-3, sits in its final parking spot on the Mare Serenitatis, the Lunar Module in the background on December 13, 1972. Oriented to the photo above, this view is looking to the top left from right center. (NASA) # 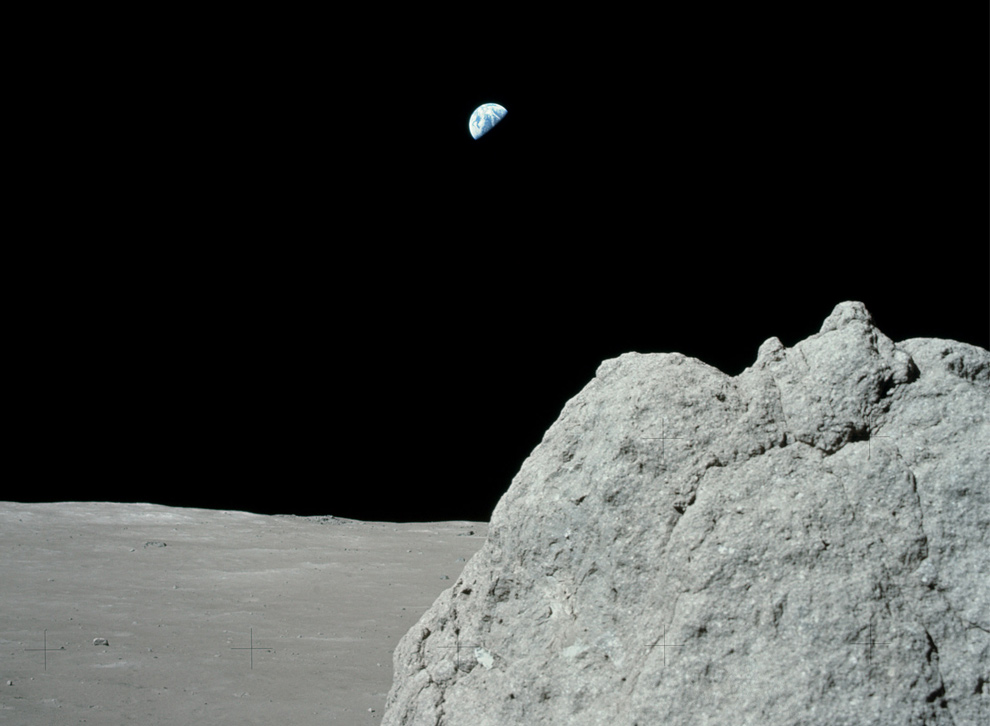 15
Looking up toward Earth, a boulder and the Moon's horizon in the foreground, at Station 2 of the Apollo 17 landing site. Photo taken on December 12th, 1972. (NASA) # 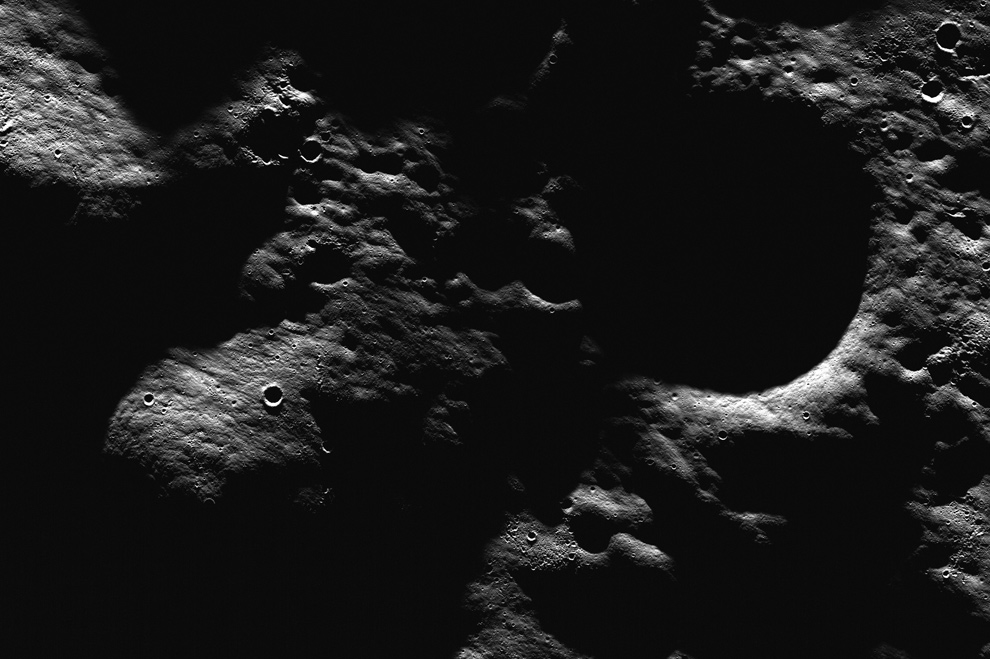 16
A starkly beautiful region a few kilometers east of Hell E crater, which is located on the floor of the ancient Imbrian-aged Deslandres impact structure. Small, secondary craters can be identified, as well as distinctive lineations made apparent by the extreme lighting, representing ejecta from a nearby impact. Image height is approximately 3.5 km (2.1 mi). More (NASA/GSFC/Arizona State University) # 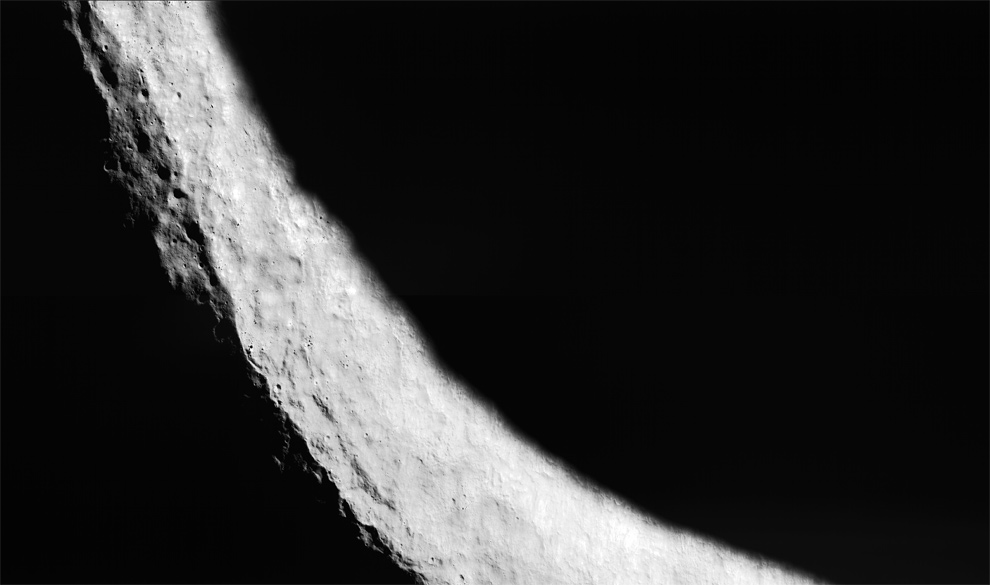 17
The lunar south pole (center left), located on the rim of the 19-km diameter Shackleton crater, was imaged by LRO on August 25th, 2009. The permanent shadow may possibly harbor water ice, and the tall well-illuminated peaks provide opportunities for solar power during most of the year for future human habitation. More (NASA/GSFC/Arizona State University) # 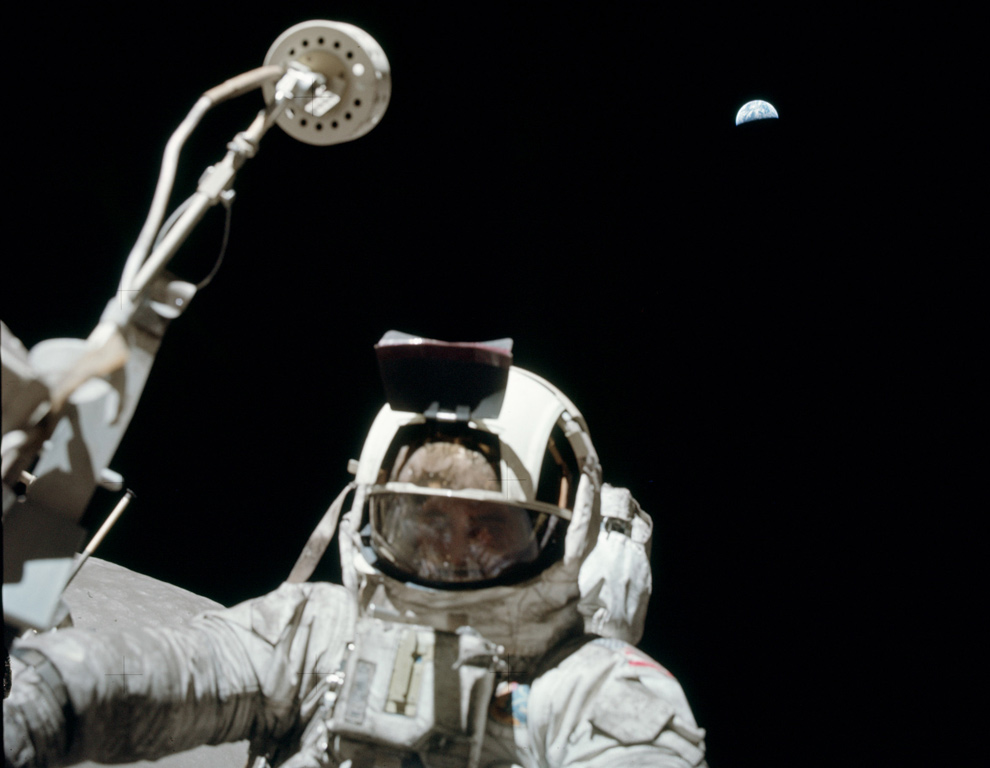 18
Apollo 17 astronaut Harrison Schmitt looks toward the camera by the Lunar Rover during an EVA on December 13th, 1972, the Earth visible in the sky above. (NASA) #