Launch of the Ares I-X

On Wednesday, October 28th, NASA launched its Ares I-X prototype vehicle, the first launch from Kennedy's pads of a vehicle other than the space shuttle since the Apollo Program's Saturn rockets were retired. NASA's Constellation Program's 327-foot-tall rocket produced 2.96 million pounds of thrust at liftoff and reached a speed of 100 mph in eight seconds. The two-minute sub-orbital test flight encountered a few problems along the way, as the launch pad was slightly damaged, a planned stage separation did not go quite according to plan, and a possible parachute failure led to a hard splashdown for its first stage. The Constellation program is under pressure as a recent committee report depicted it as overly expensive. The Obama administration is set to make a decision in the next several months about the near-term direction of U.S. Space Policy. (28 photos total) 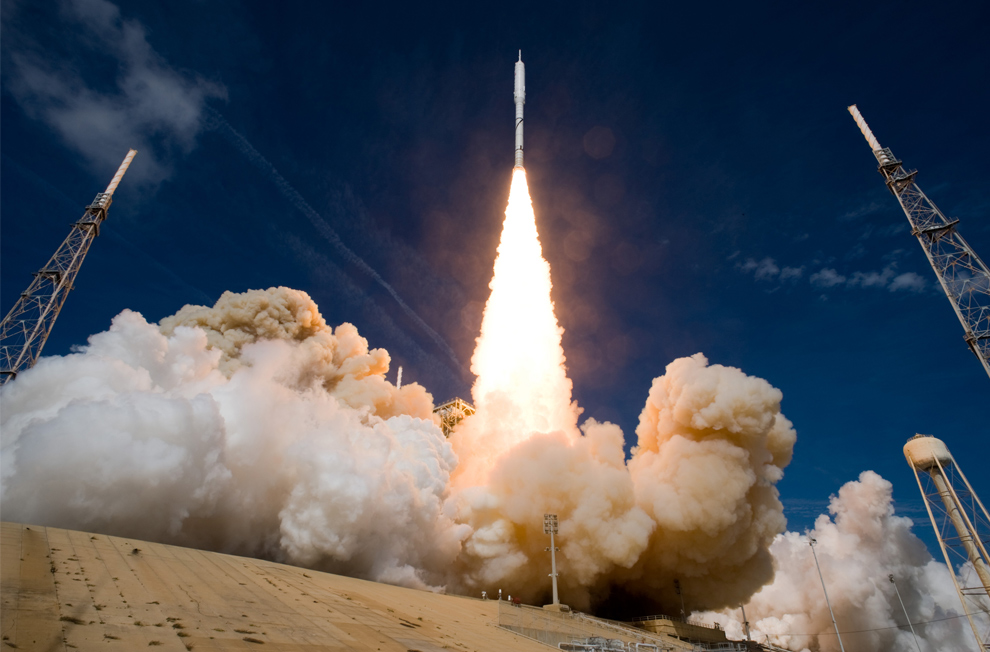 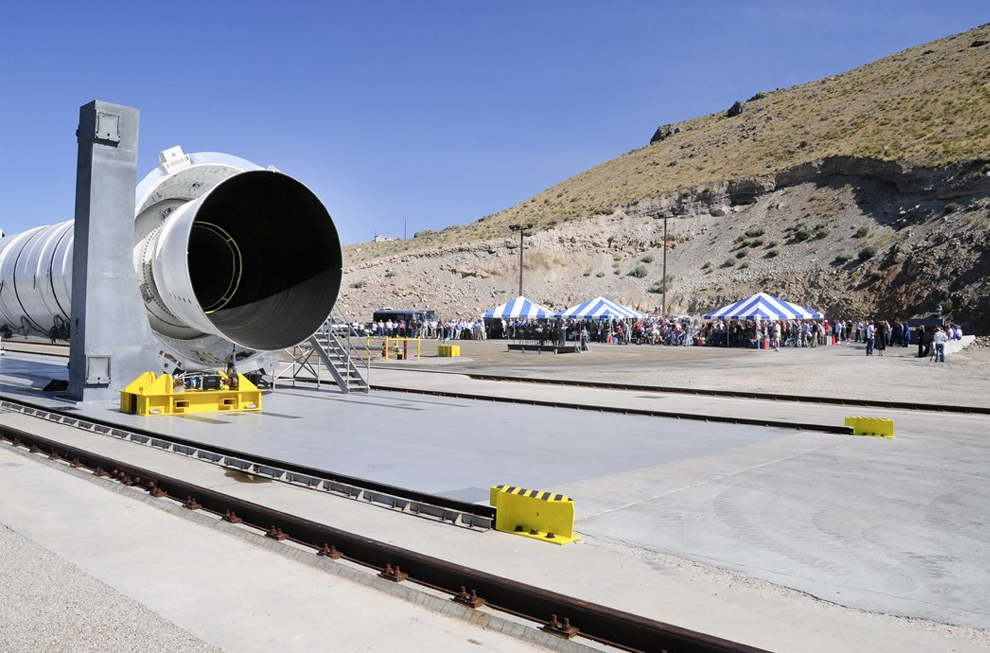 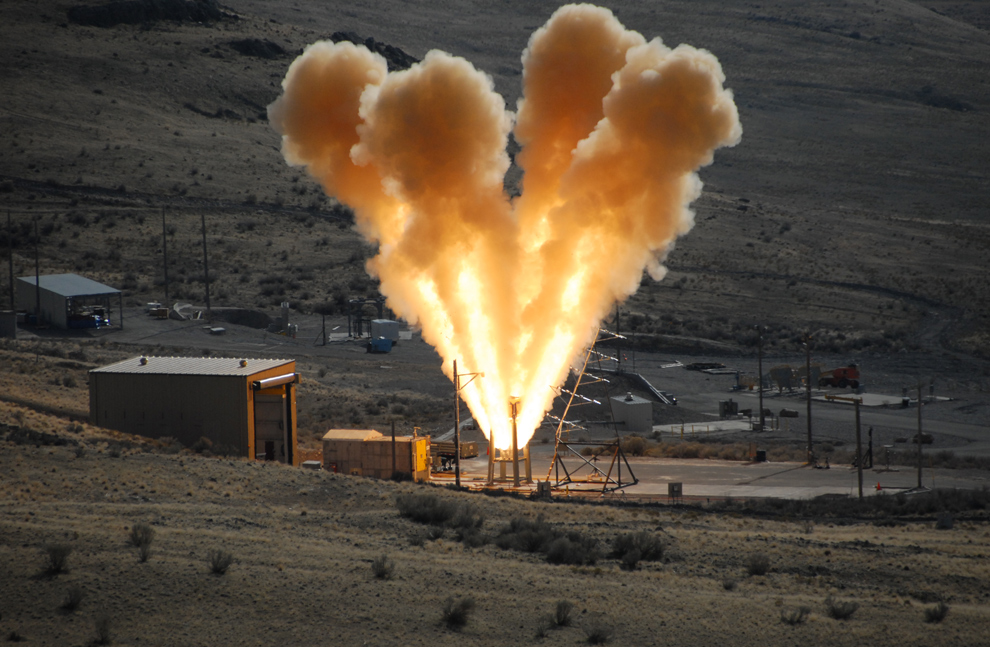 3
Flames shot more than 100 feet high in a successful 5.5-second ground test firing Thursday, Nov. 20, 2008 of a launch abort motor for NASA's next generation spacecraft, the Orion crew exploration vehicle. NASA and the Orion industry team conducted the firing at the Alliant Techsystems, or ATK, facility in Promontory, Utah. (NASA) # 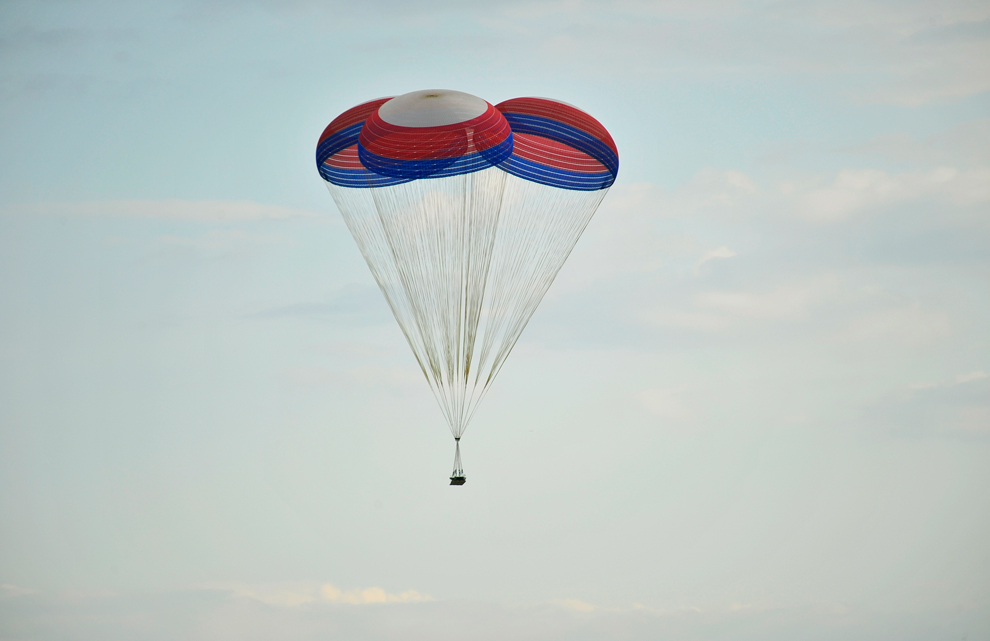 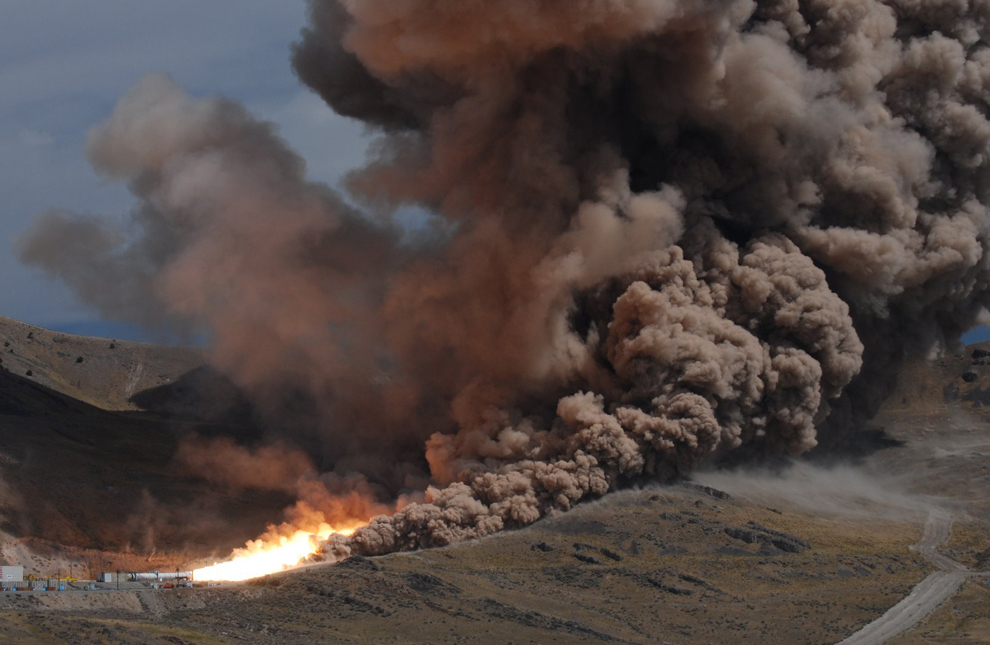 5
On Sept. 10, 2009, NASA and industry engineers lit up the Utah sky with the initial full-scale, full-duration test firing of the first stage motor for the Ares I rocket. The 154-foot solid rocket motor produced heat two-thirds the temperature of the sun and its 12-foot-diameter cylinder delivered 3.6 million pounds of thrust. (NASA, Walt Lindblom) # 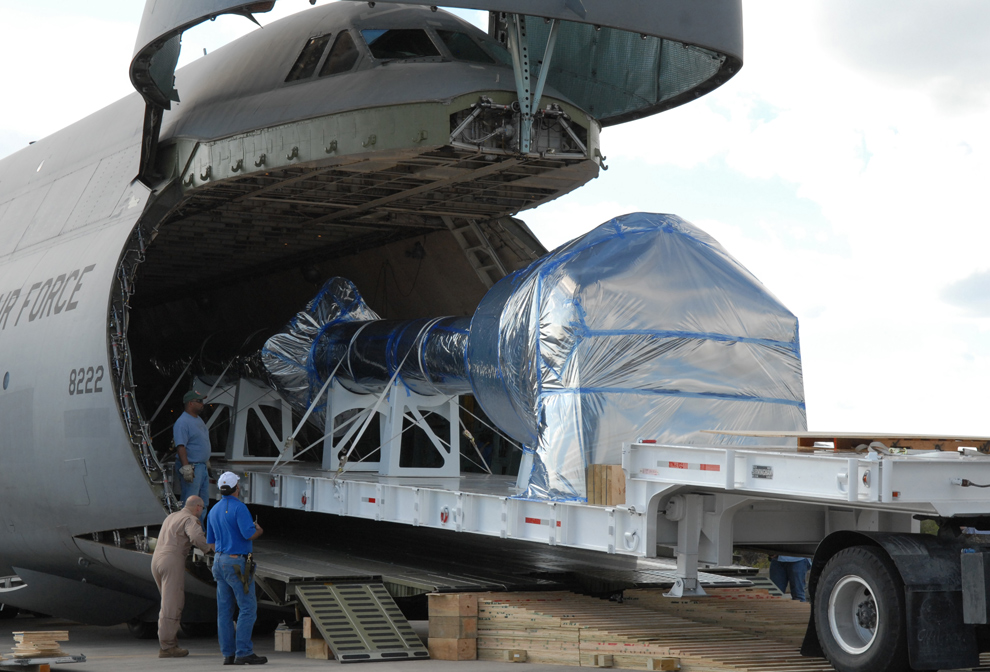 6
At the Shuttle Landing Facility at NASA's Kennedy Space Center in Florida, hardware that will be used in the launch of the Ares I-X rocket is offloaded from a C-5 aircraft. The hardware consists of a precisely machined, full-scale simulator crew module and launch abort system to form the tip of NASA's Ares I-X rocket. (NASA/Jack Pfaller) # 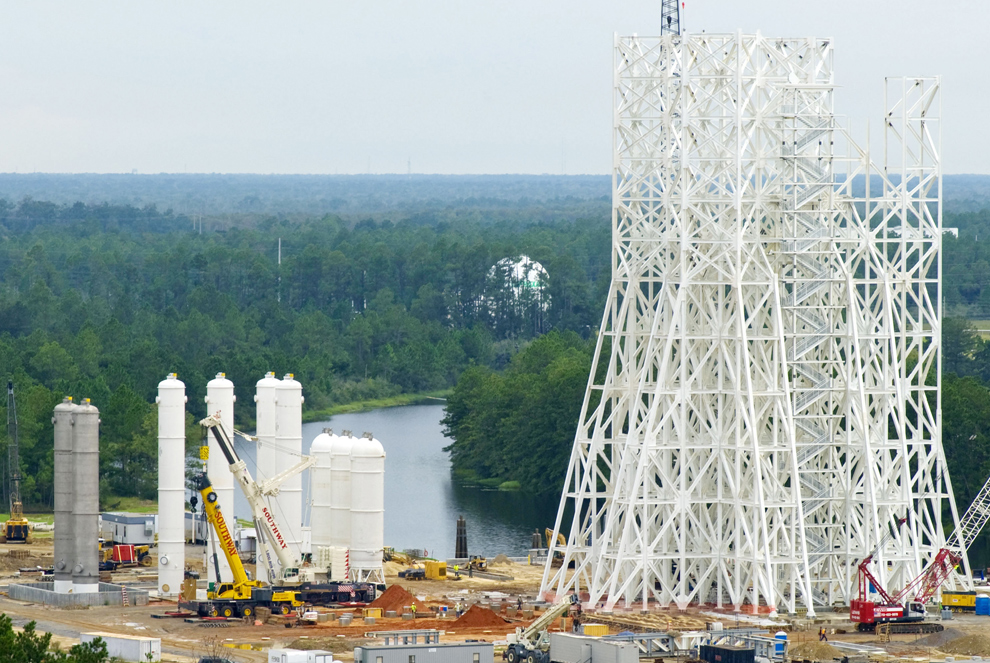 7
A-3 Test Stand Construction at NASA's Stennis Space Center in in Hancock County, Mississippi. Nine water, isopropyl alcohol (IPA) and liquid oxygen (LOX) tanks have been delivered and installed, with five more water tanks scheduled to arrive in upcoming weeks. The two IPA tanks shown on the left and the three LOX tanks shown on the right are 35,000 gallons each. The four water tanks in the center are 39,000 gallons each. All 14 of the tanks will be used by the chemical steam generators units that will be installed on the A-3 stand for creating simulated altitudes of up to 100,000 feet, a testing environment for Constellation, initially to validate the performance of the J2-X engine for the upper stage of the new Ares I launch vehicle. (NASA/SSC) # 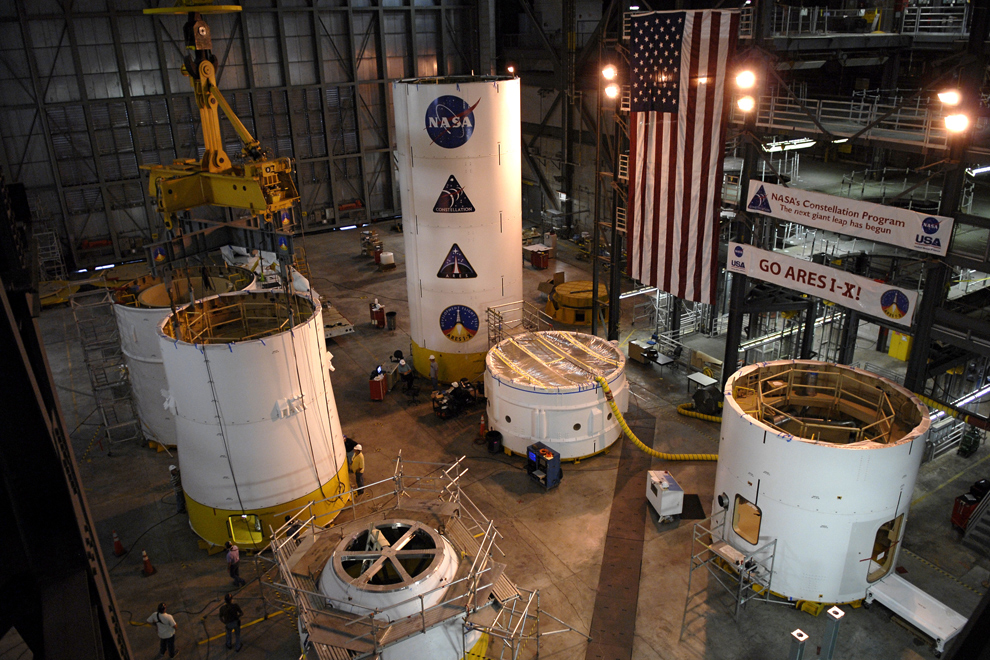 8
In High Bay 4 of the Vehicle Assembly Building at NASA's Kennedy Space Center in Florida, the Ares I-X upper stage simulator service module/service adapter (left, center) has been installed on a stand. Other segments are placed and stacked on the floor around it. Ares I-X is the test vehicle for the Ares I, which is part of the Constellation Program to return men to the moon and beyond. (NASA/Kim Shiflett) # 9
In the Vehicle Assembly Building's High Bay 3 at NASA's Kennedy Space Center in Florida, the Ares I-X aft center booster segment is lowered for attachment to the aft booster and skirt. (NASA/Tim Jacobs) # 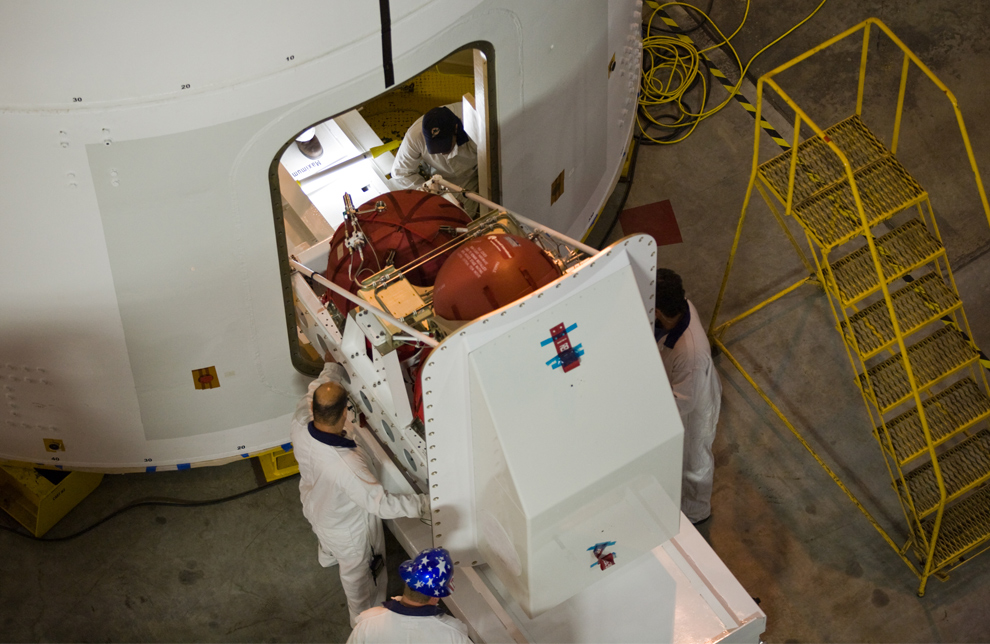 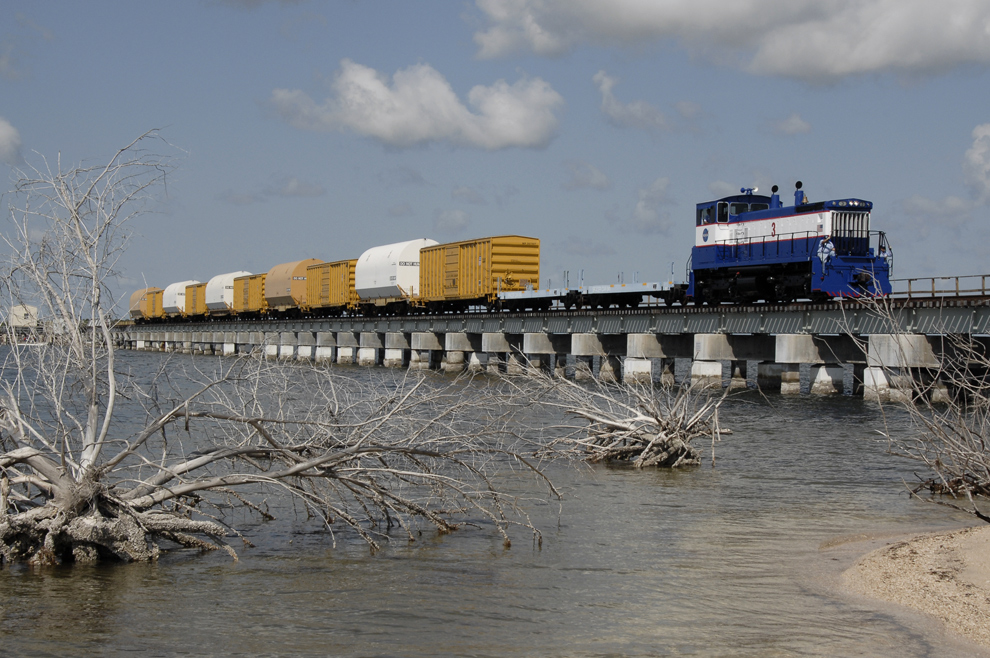 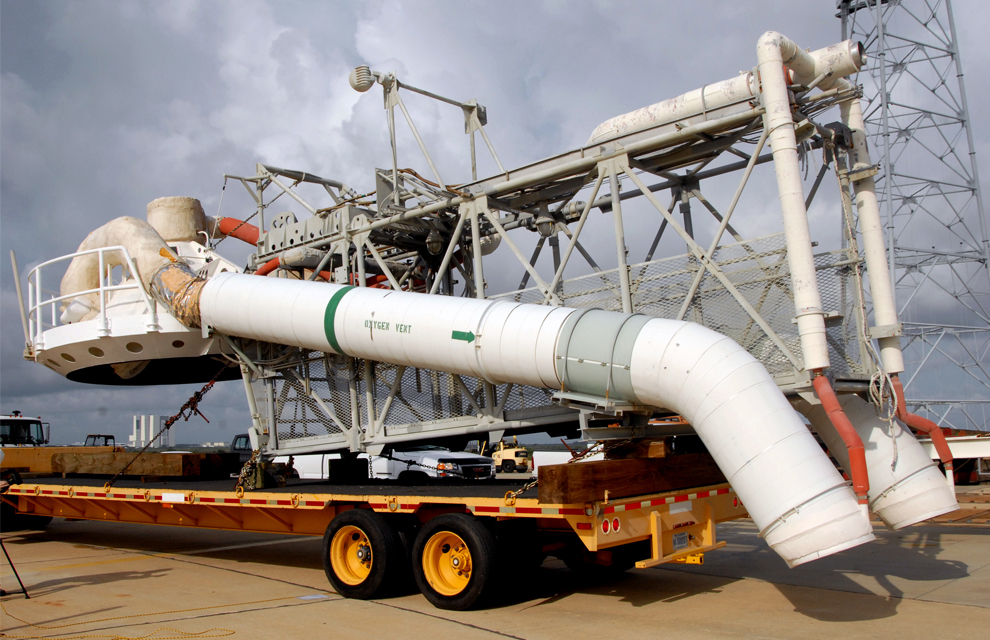 12
The oxygen vent arm and hood removed from the fixed service structure at NASA Kennedy Space Center's Launch Pad 39B is ready for transfer from the pad to a storage facility, after the pad was transferred from the Space Shuttle Program to the Constellation Program. The ground operations team is modifying pad B for the Ares I-X rocket launch. Modifications also include installing access platforms and a vehicle stabilization system. (NASA/Jack Pfaller) # 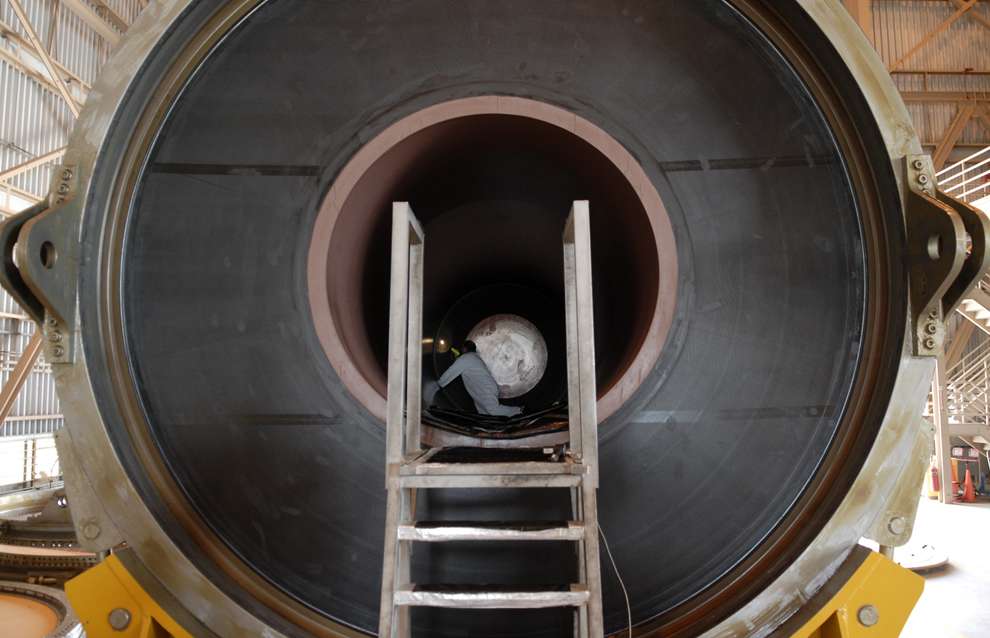 13
In the Rotation, Processing and Surge Facility at NASA's Kennedy Space Center in Florida, a technician performs propellant grain inspection of the inside of the Ares I-X motor segment. It is one of four reusable motor segments and nozzle exit cone shipped by the Ares I first-stage prime contractor Alliant Techsystems Inc. for final processing and integration in the facility. The booster used for the Ares I-X launch is being modified by adding new forward structures and a fifth segment simulator. (NASA/Jim Grossmann) # 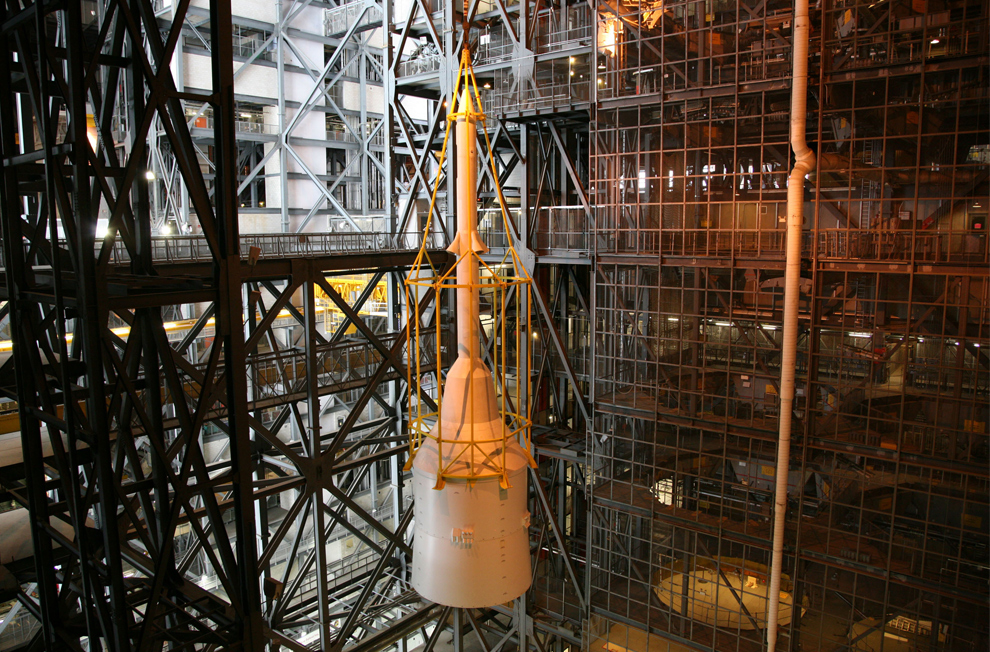 14
In the Vehicle Assembly Building's High Bay 4, assembly of the Ares I-X rocket nears completion. The yellow framework, nicknamed the "birdcage," lifts Super Stack 5 toward an opening at the 16th floor crossover into the transfer aisle. The stack will be positioned on top of the segments already in place on the mobile launcher platform in High Bay 3, completing assembly of the 327-foot-tall rocket. Five super stacks make up the rocket's upper stage that is integrated with the four-segment solid rocket booster first stage. (NASA/Dimitri Gerondidakis) # 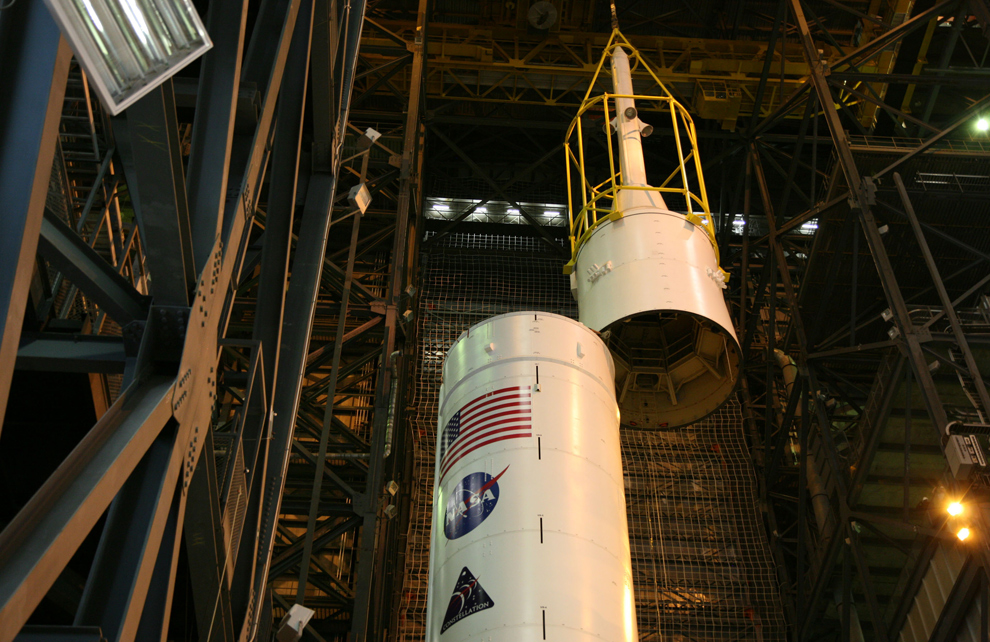 15
In the Vehicle Assembly Building's High Bay 3, a yellow framework, lifts Super Stack 5 atop Super Stack 4. Once in position, assembly of the Ares I-X rocket will be complete. The 327-foot-tall rocket is one of the largest processed in the bay, rivaling the height of the Apollo Program's 364-foot-tall Saturn V. (NASA/Dimitri Gerondidakis) # 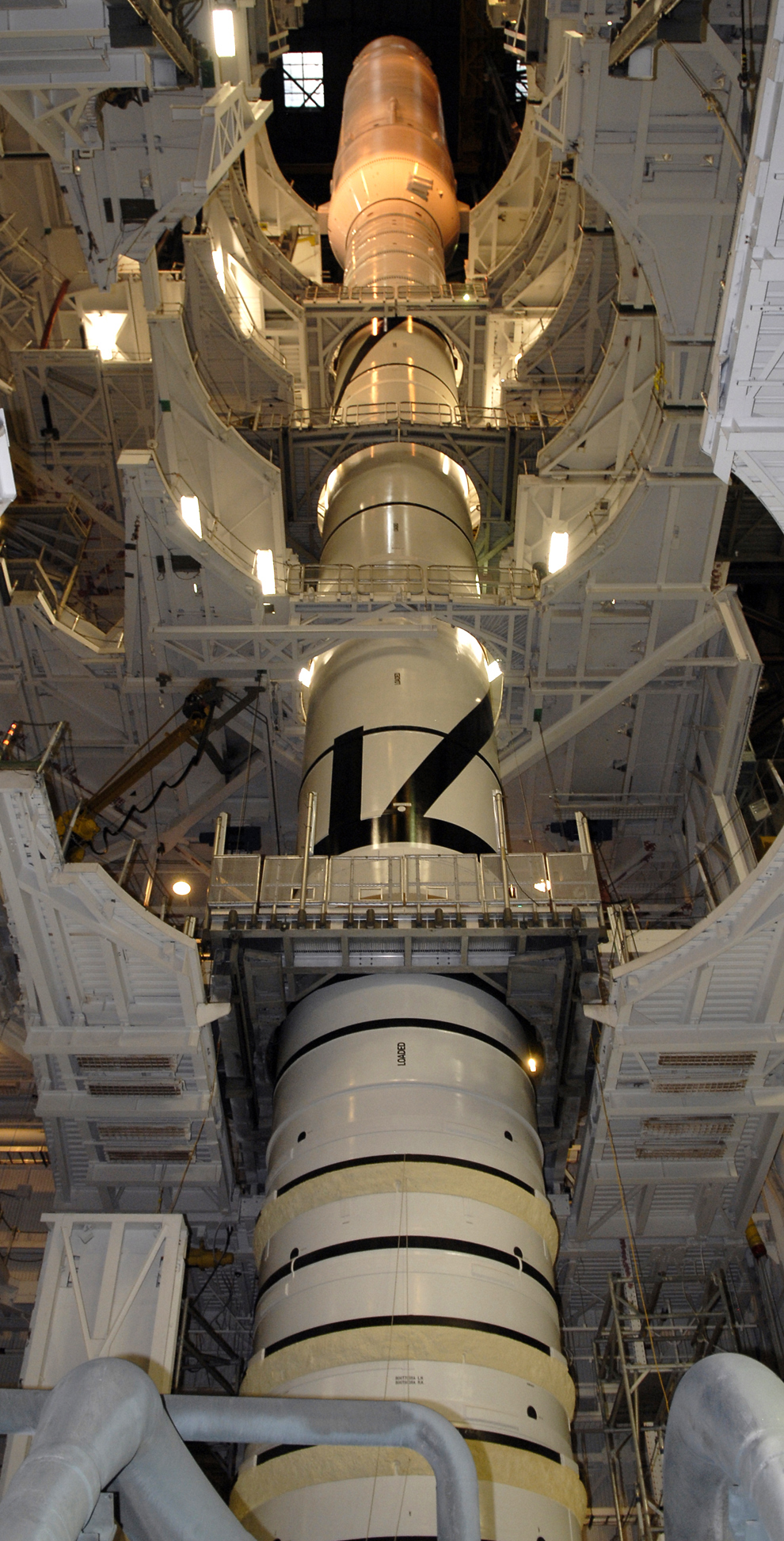 16
Work platforms surround the Ares I-X launch vehicle in the Vehicle Assembly Building's High Bay 4 at NASA's Kennedy Space Center in Florida. The rocket has undergone a sway test that simulated conditions the rocket could experience during rollout to Launch Pad 39B, wind conditions at the pad and first-stage ignition. During the test, vibrations are mechanically induced into the rocket by four hydraulic shakers and a sway is manually introduced for lateral motion to measure the vehicle's response. A total of 44 accelerometers are installed on the flight test vehicle that required more than 27,000 feet of cable. (NASA/Kim Shiflett) # 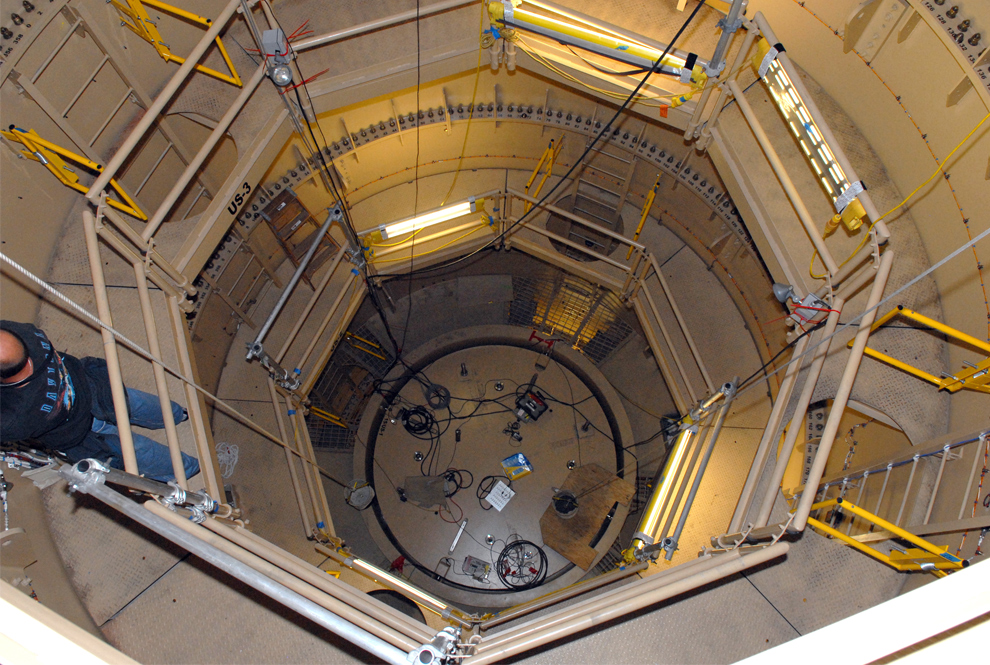 17
In the Vehicle Assembly Building's High Bay 3 at Kennedy Space Center in Florida, a technician works on a platform mounted on the interior wall of the upper stage simulator of the 327-foot-tall Ares I-X rocket. (NASA/Jim Grossmann) # 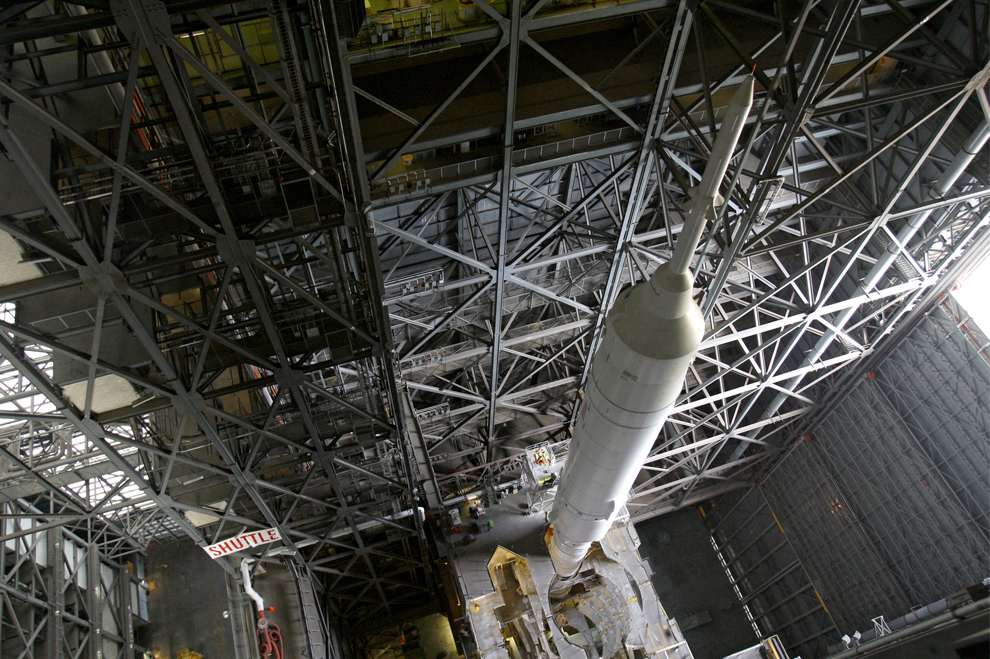 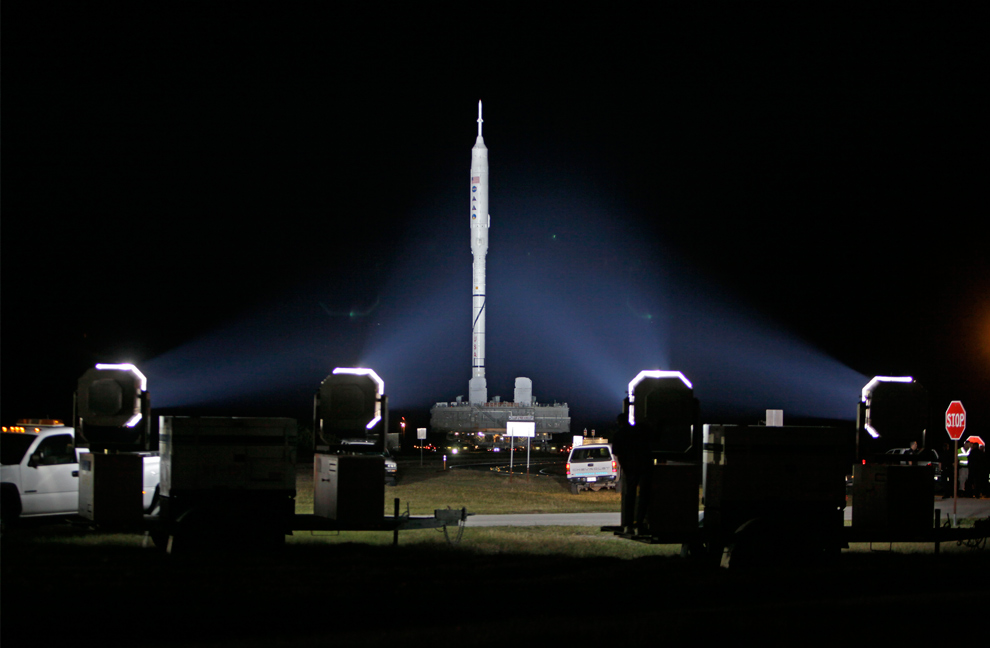 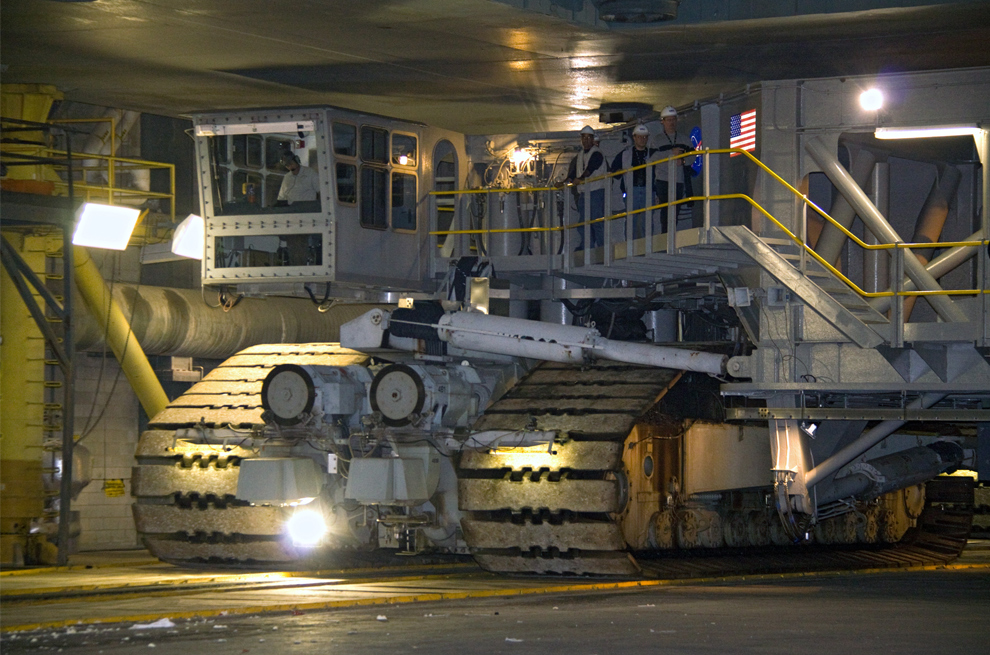 20
The driver of the crawler-transporter slowly maneuvers the huge vehicle under the mobile launcher platform holding the 327-foot-tall Ares I-X rocket at NASA's Kennedy Space Center in Florida. The crawler-transporter will carry the rocket on the 4.2-mile journey to Launch Pad 39B. The transfer of the pad from the Space Shuttle Program to the Constellation Program took place May 31. Modifications made to the pad include the removal of shuttle unique subsystems, such as the orbiter access arm and a section of the gaseous oxygen vent arm, along with the installation of three 600-foot lightning towers, access platforms, environmental control systems and a vehicle stabilization system. (NASA/Jack Pfaller) # 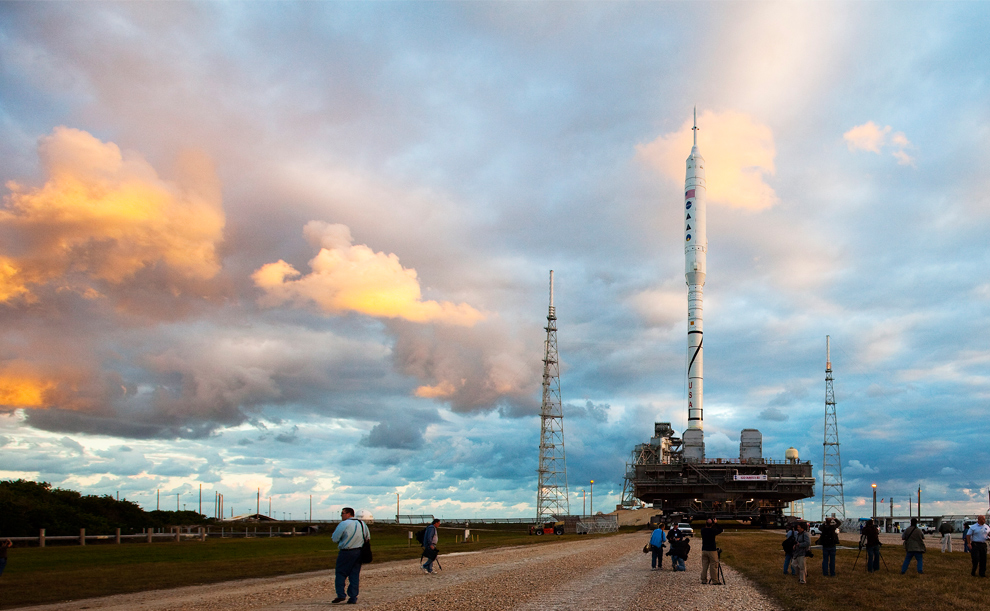 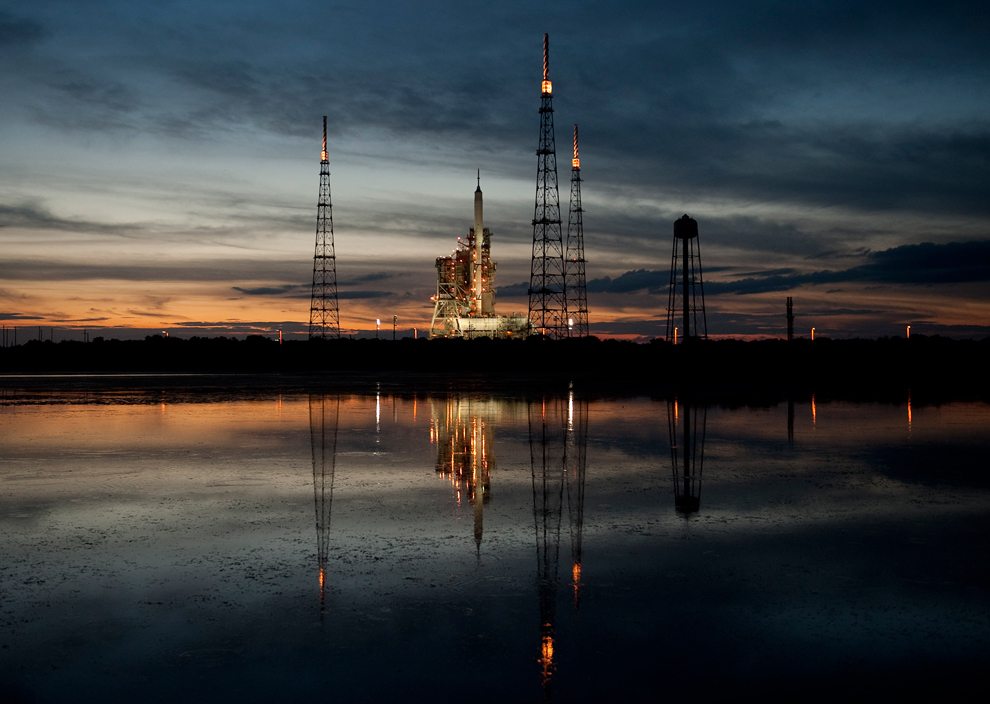 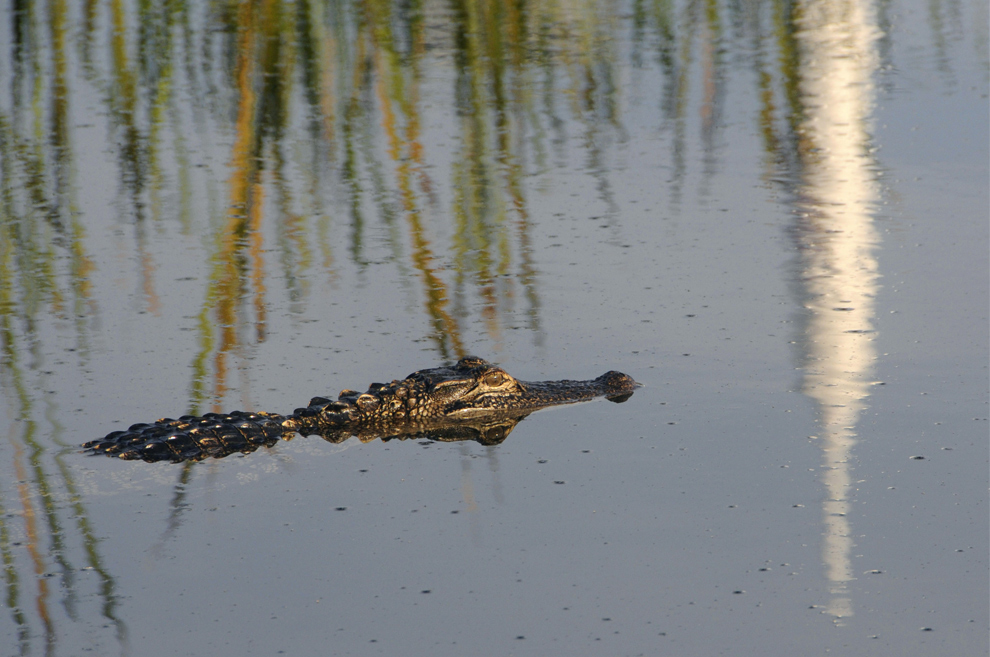 23
The top section of NASA's new Ares 1-X test vehicle is reflected in a pond as an alligator lurks near launch pad 39-B at Kennedy Space Center, Florida on October 26, 2009. (BRUCE WEAVER/AFP/Getty Images) # 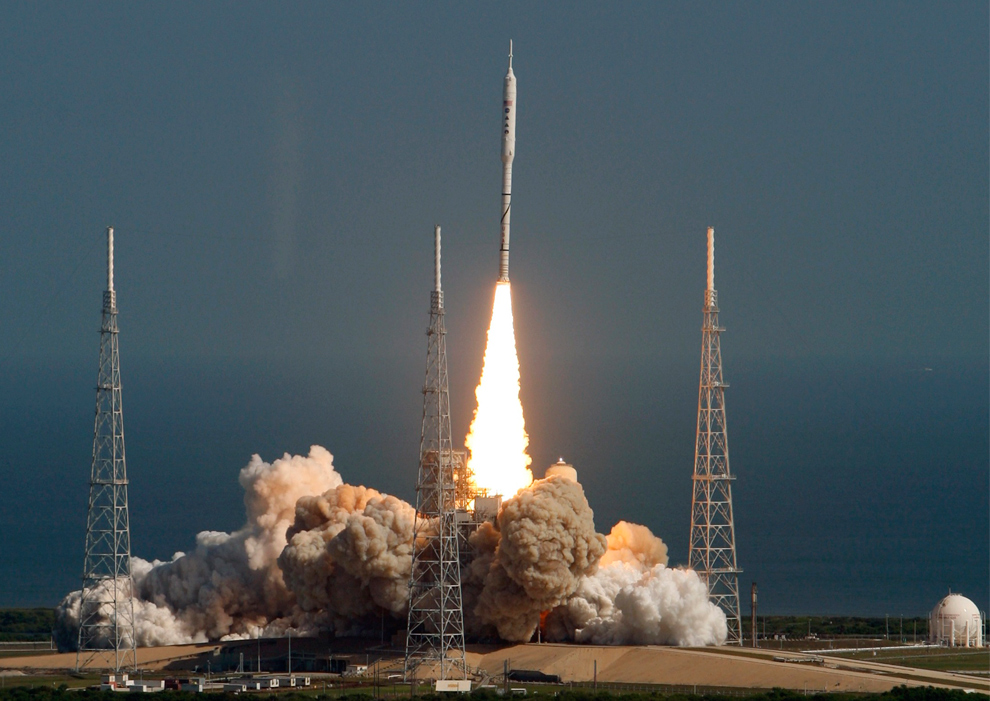 24
The Ares 1-X test rocket lifts off on a six-minute suborbital flight from launch pad 39B at the Kennedy Space Center in Cape Canaveral, Florida, October 28, 2009. (REUTERS/Pierre Ducharme) # 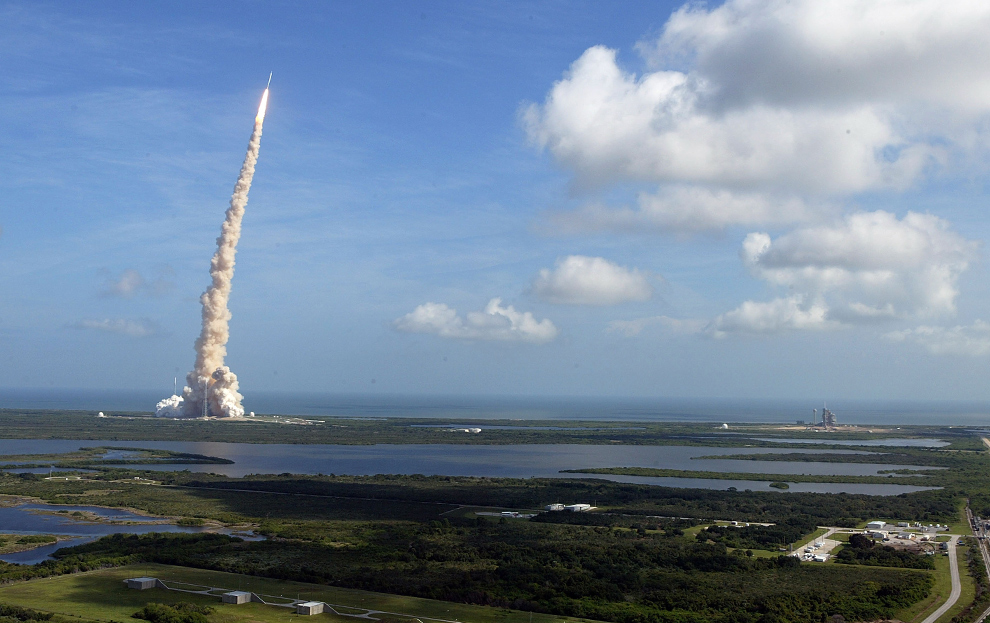 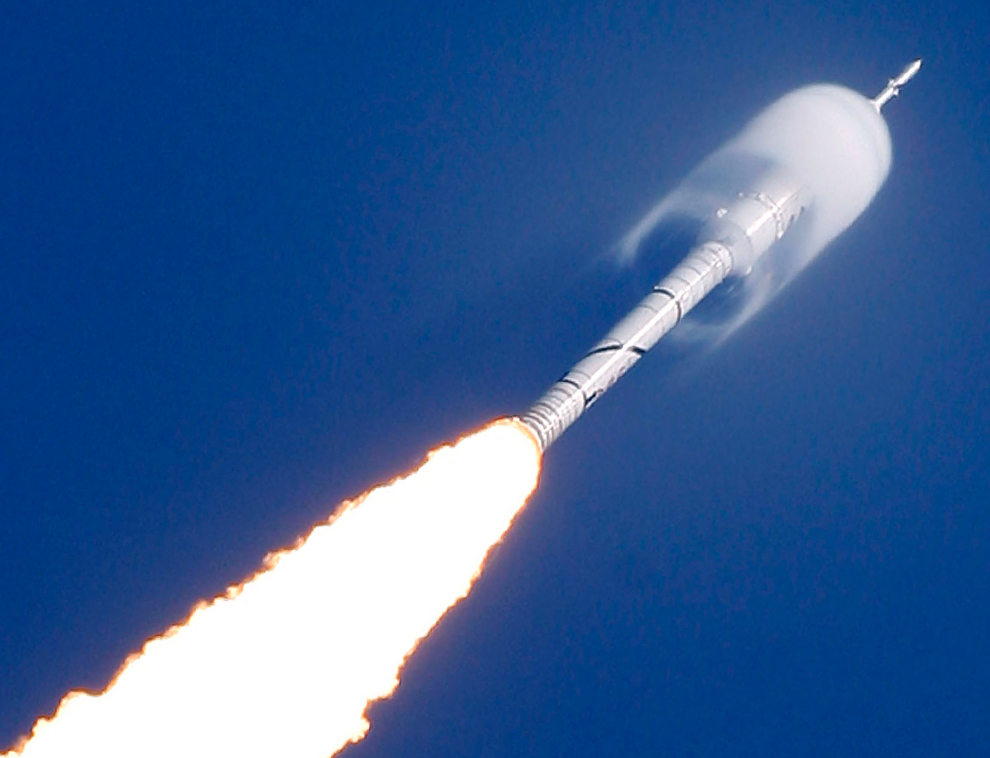 26
A cone of moisture surrounds part of the Ares I-X rocket during lift off Wednesday, Oct. 28, 2009, on a sub-orbital test flight from the Kennedy Space Center's Launch Pad 39-B in Cape Canaveral, Fla. (AP Photo/Chris O'Meara) # 27
The Ares 1-X test rocket climbs into the sky on a six-minute suborbital flight from launch pad 39B at the Kennedy Space Center in Cape Canaveral, Florida October 28, 2009. (REUTERS/Scott Audette) # 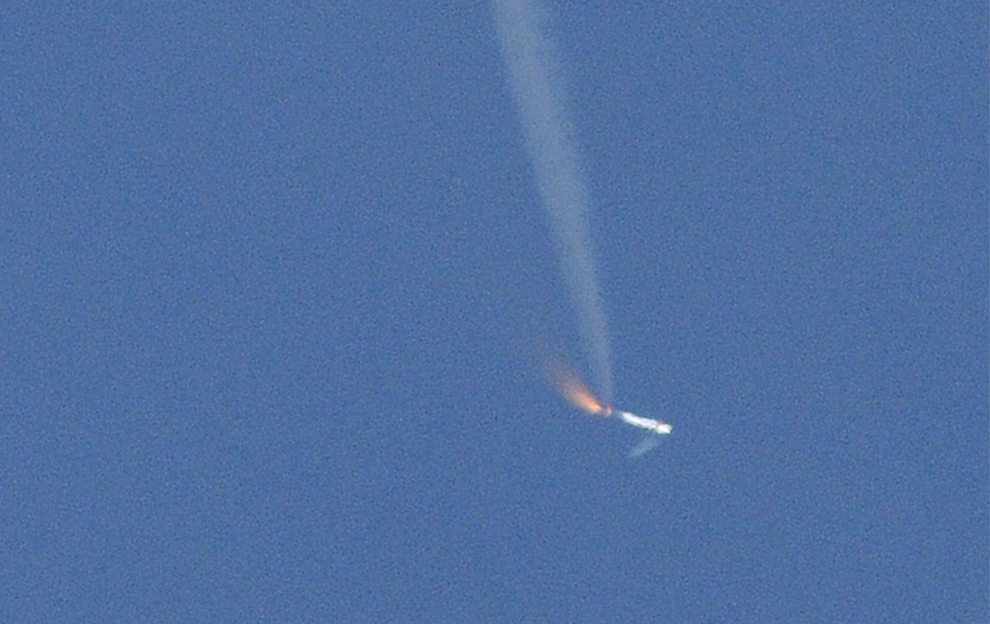 28
NASA's new Ares 1-X test vehicle goes through first stage/upper stage simulator seperation about two minutes after launch Kennedy Space Center's launch pad 39-B in Florida on October 28, 2009. After two and a half minutes, the main part of the 327-foot (100-meter) rocket splashed down as planned in the Atlantic Ocean as applause broke out in a relieved and excited NASA control room. (BRUCE WEAVER/AFP/Getty Images) #