Flooding in the Southeast 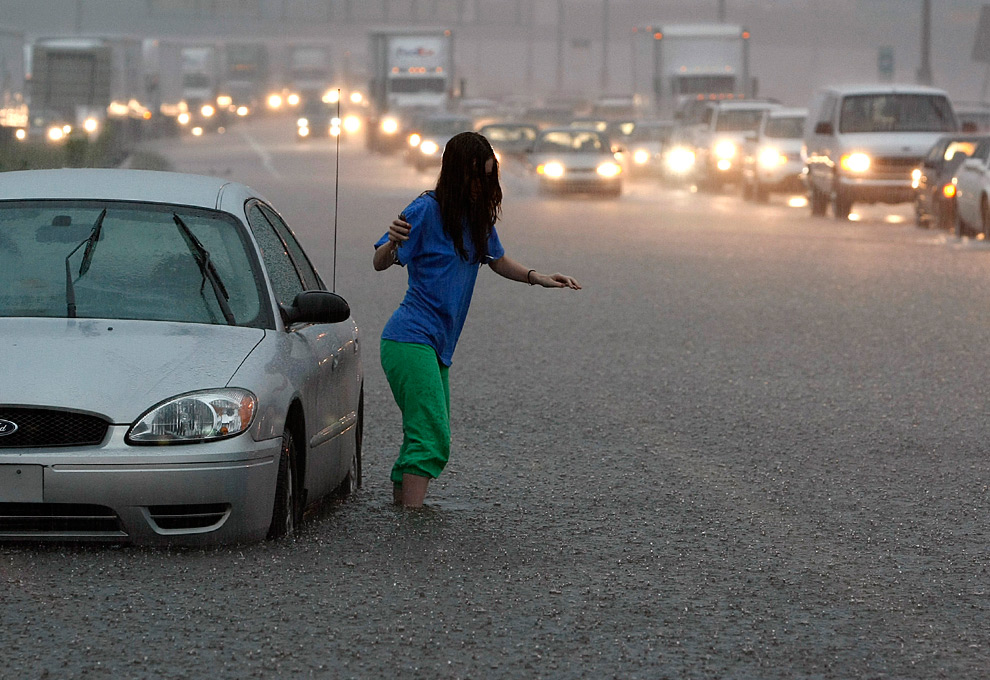 A motorist abandons her flooded vehicle on I-85 South near Lilburn, Ga., as part of the highway becomes covered with water during rush hour on Monday, Sept. 21, 2009. (AP Photo/The Atlanta Journal & Constitution, Curtis Compton) 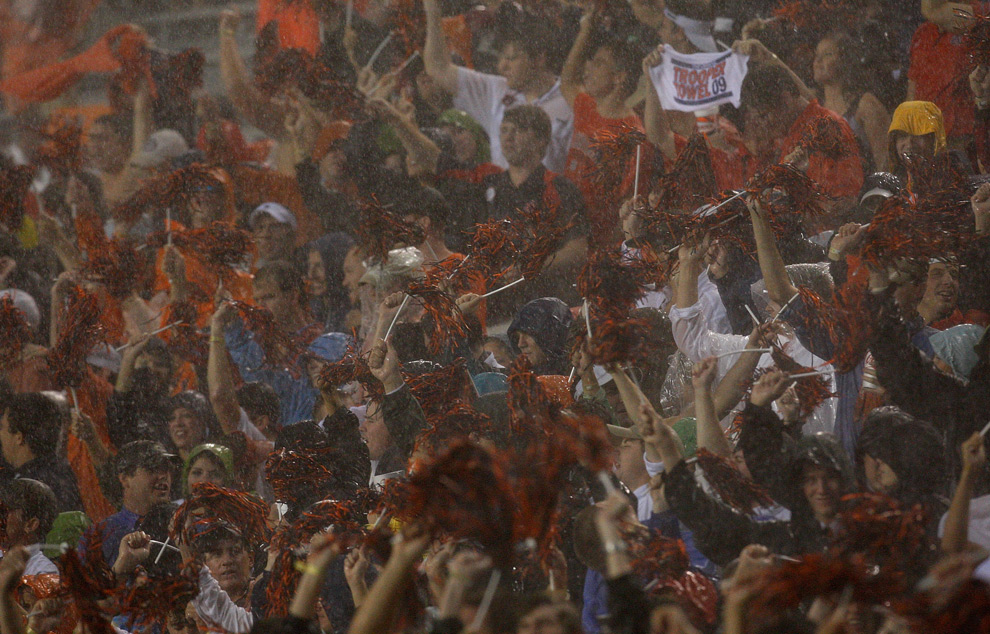 2
Fans stand in a heavy rain during a weather delay before the Auburn Tigers face the West Virginia Mountaineers at Jordan-Hare Stadium on September 19, 2009 in Auburn, Alabama. (Kevin C. Cox/Getty Images) # 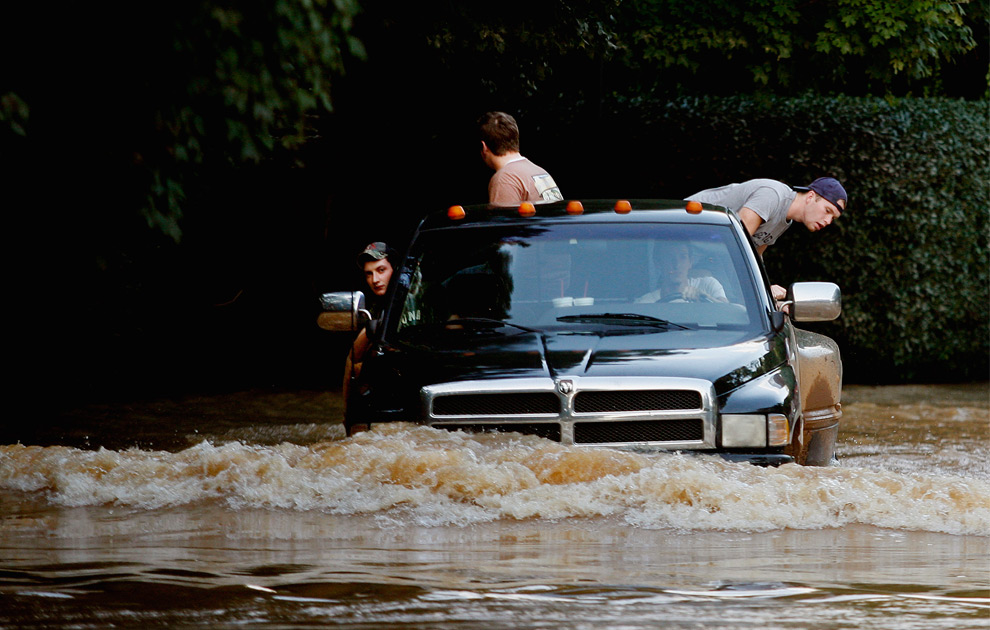 3
Residents keep an eye on the water as they drive their truck across a flooded road from their subdivision, which was cut off due to flooding from heavy rains, in Lawrenceville, Georgia September 22, 2009. (REUTERS/Tami Chappell) # 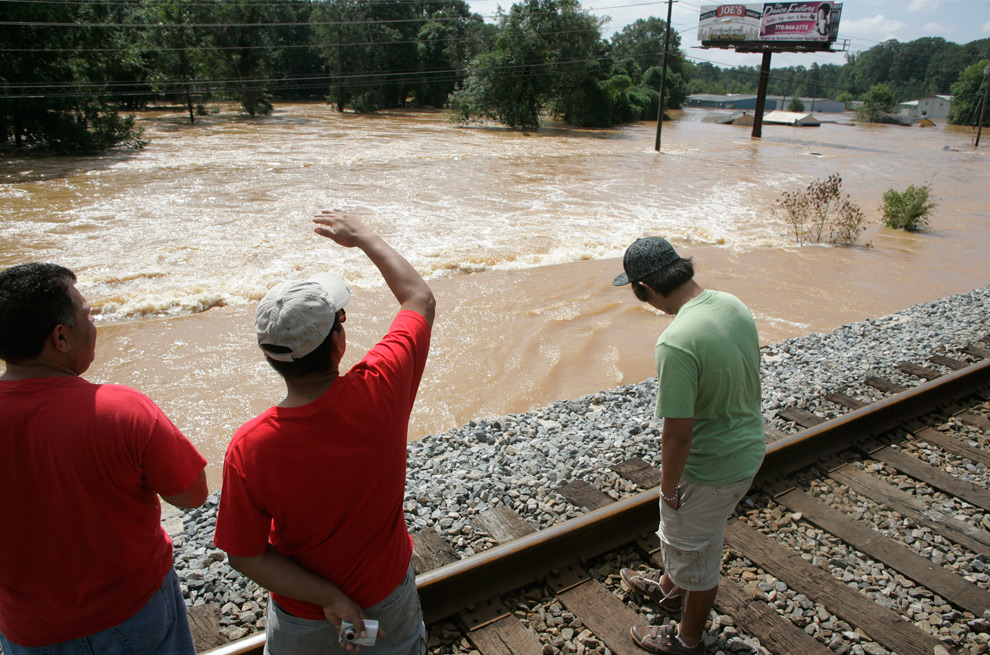 4
Ceasar Rendon, shields the sun as he, along with Marco Girron, left, and son Ceasar Rendon watch Sweetwater Creek rage up to the roof of the auto repair shop where he works, Tuesday, Sept. 22, 2009, in Austell, Ga. (AP Photo/John Amis) # 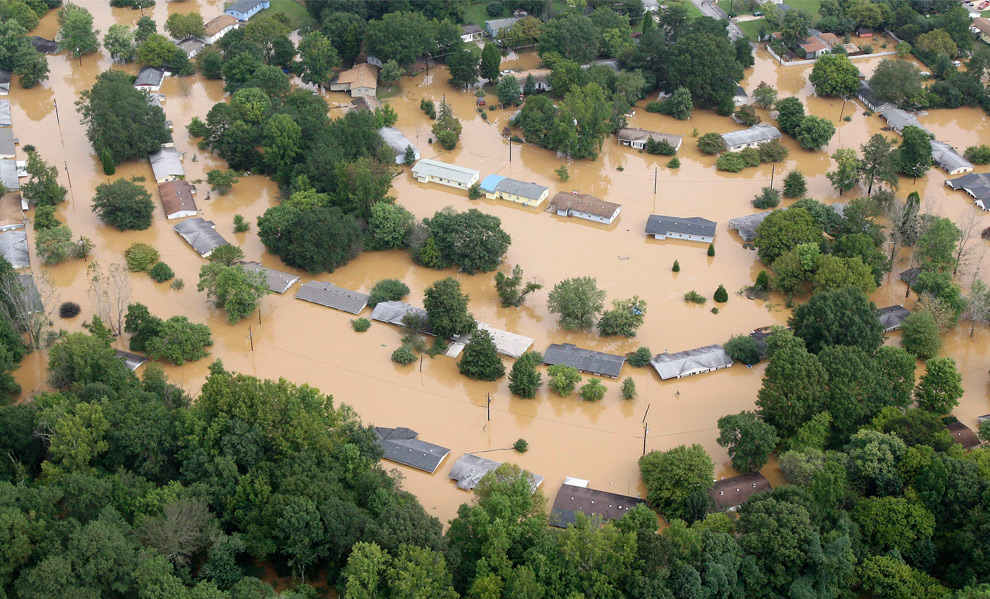 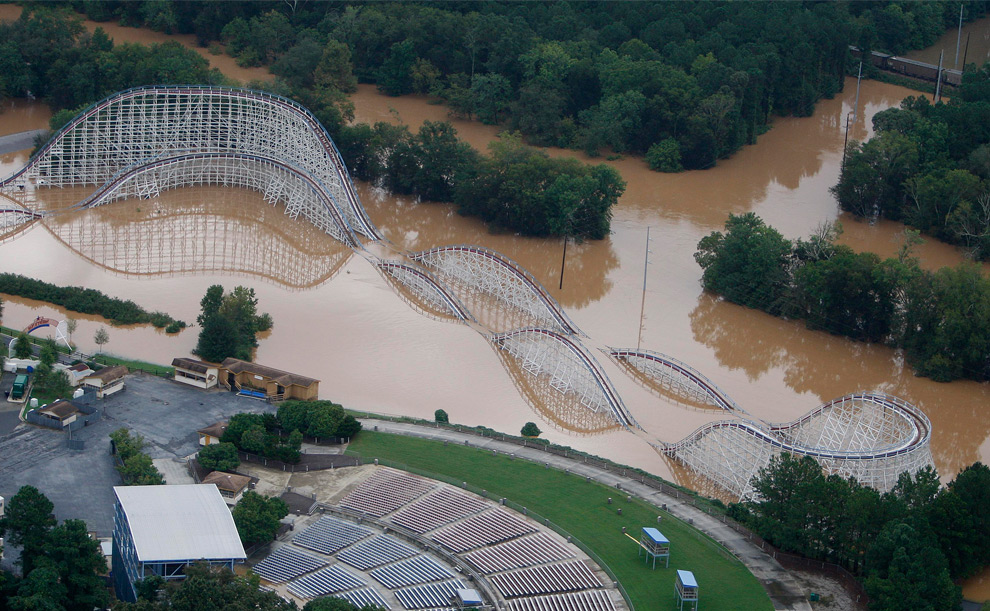 6
A roller coaster at Six Flags of Georgia Amusement Park is flooded on Tuesday, Sept. 22, 2009 in Austell, Ga. Several days of heavy rain has flooded parts of the Atlanta area. (AP Photo/John Bazemore) # 7
John Barry carries Ruby across Maxwell Road in East Ridge, near Chattanooga, Tenn., to his brother's house on the dryer side of the road on Monday, Sept. 21, 2009, as flood waters covered many area streets and yards. (AP Photo/Angela Lewis, Chattanooga Times Free Press) # 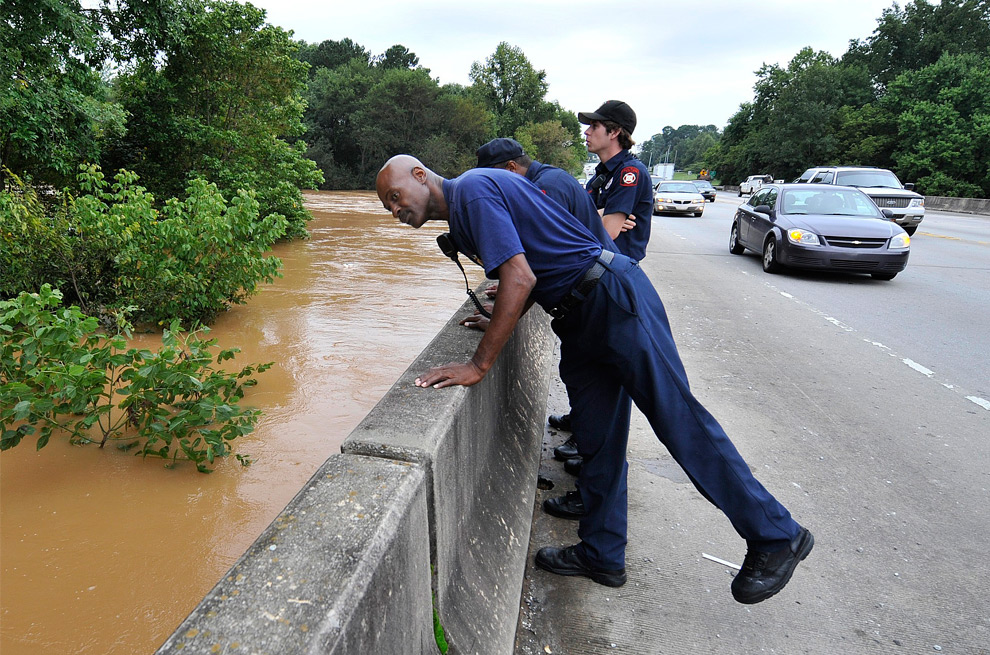 8
Fulton County Firefighter Fred Brown looks over the bridge on MLK Drive into the rising Chattahoochee River for a man reported floating down the river on Tuesday, Sept. 22, 2009. The bridge separates Cobb County from Fulton County. The water was less than 2 feet below the cars on the bridge. (AP Photo/The Atlanta Journal & Constitution, Johnny Crawford) # 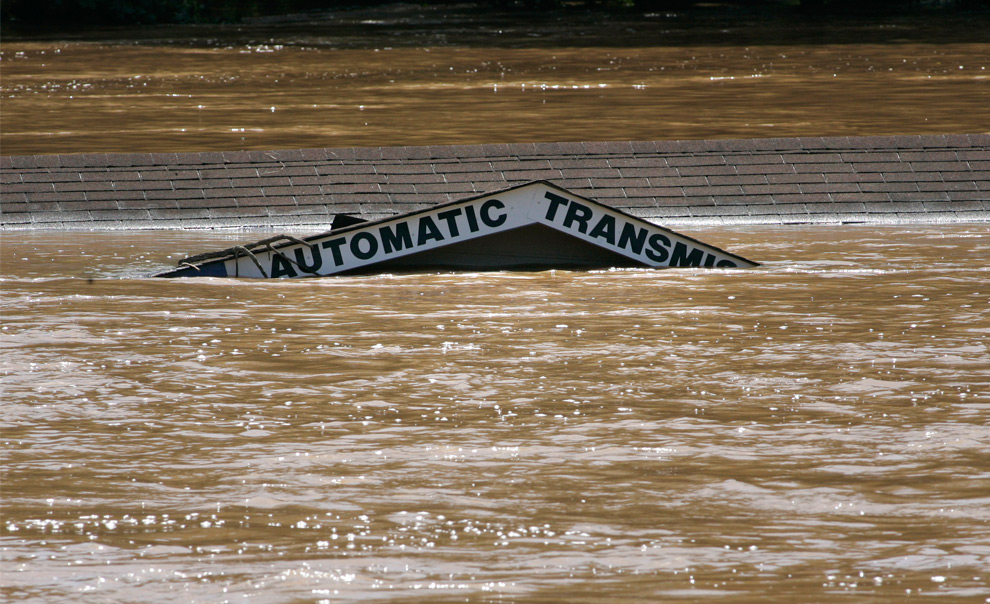 9
The roof of an auto shop is barely visible above swollen Sweetwater Creek after heavy rains of recent days caused the creek to flood, Tuesday, Sept. 22, 2009, in Austell, Ga. (AP Photo/John Amis) # 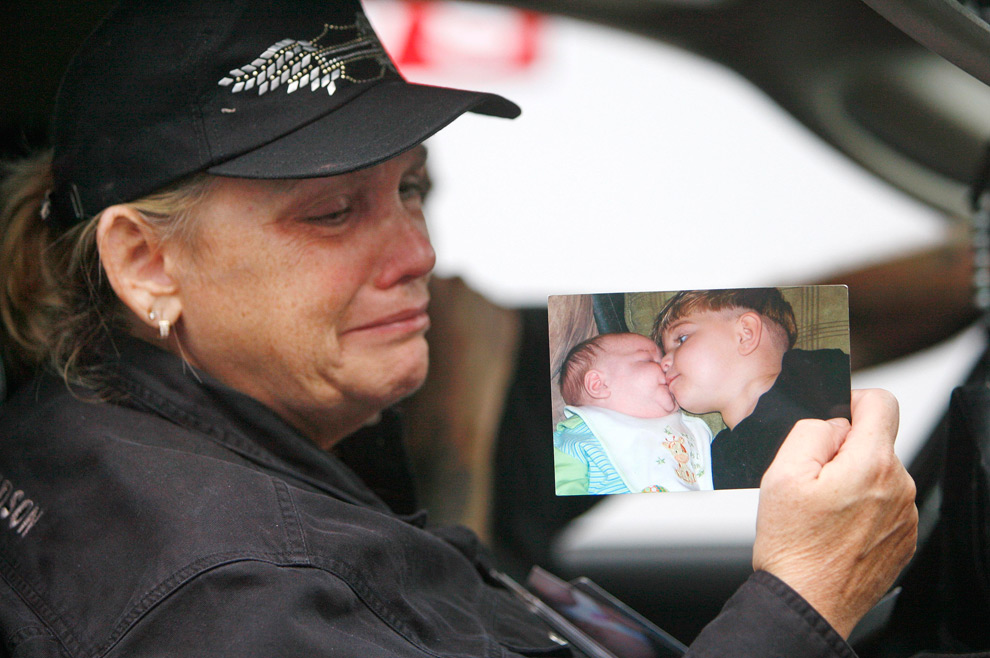 10
Pat Crawford cries as she holds a photo of her 2-year-old grandson Preston Slade Crawford, right in photograph, who died Monday, Sept. 21, 2009, when his home was washed into the Snake Creek in Carrollton, Ga. (AP Photo/John Bazemore) # 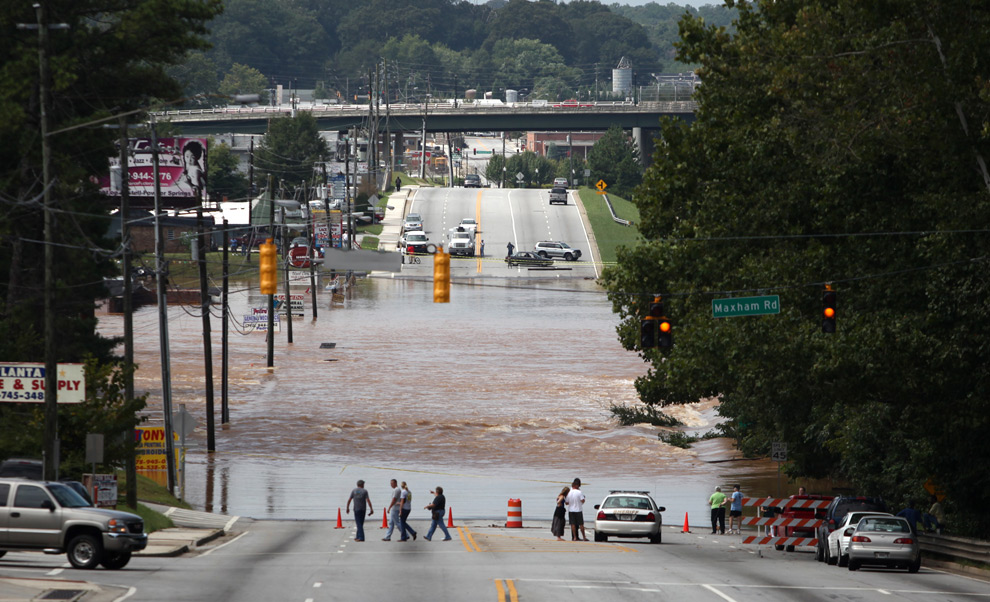 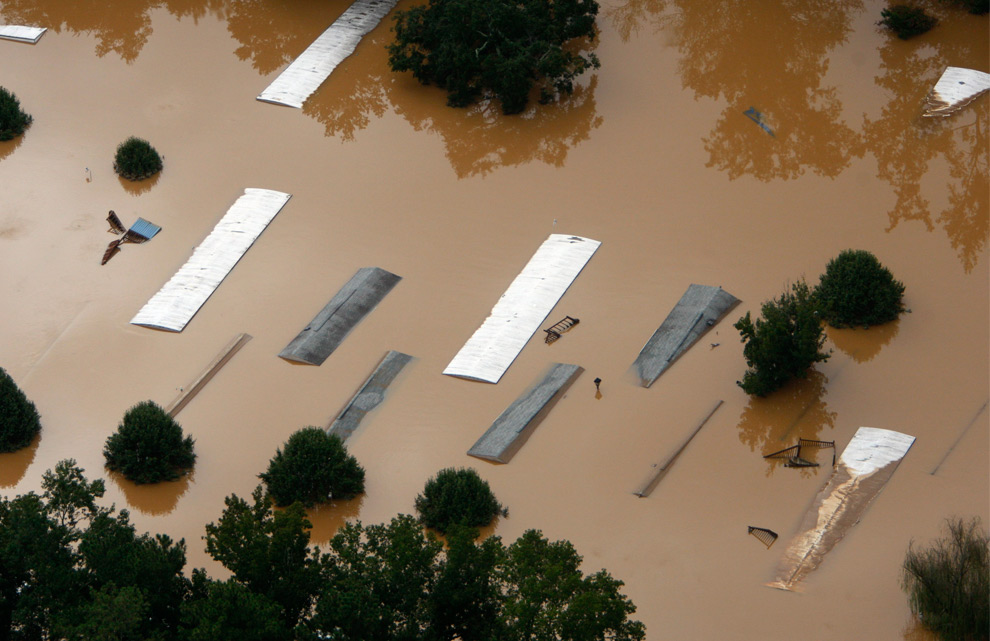 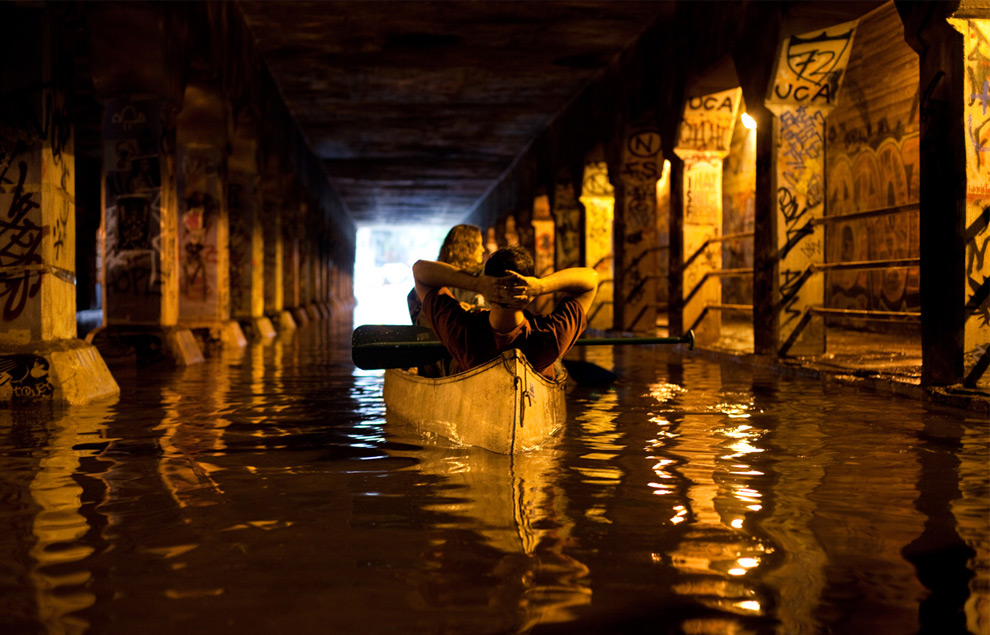 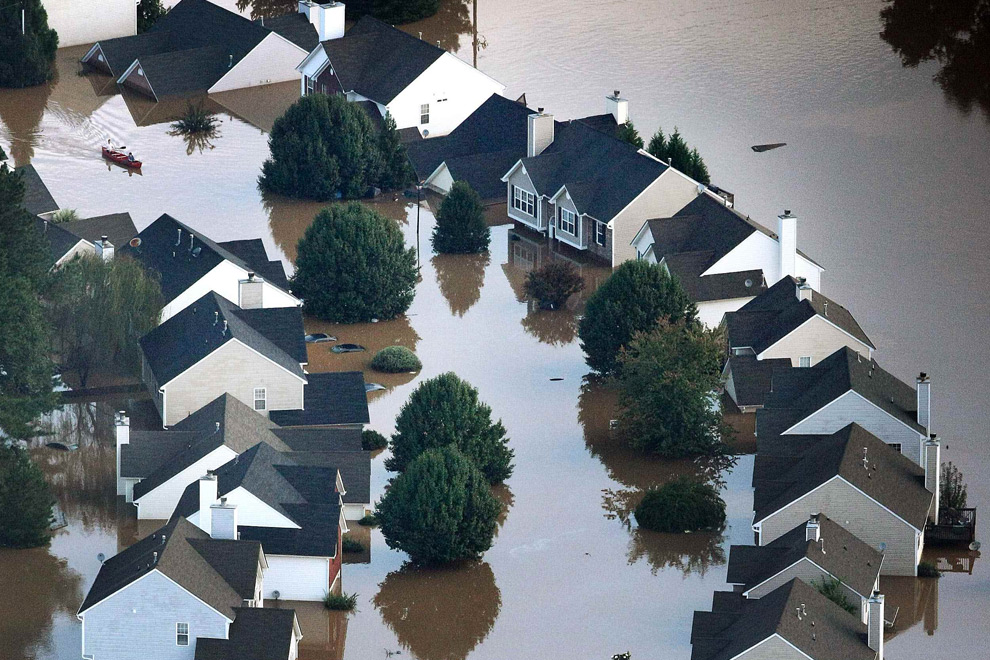 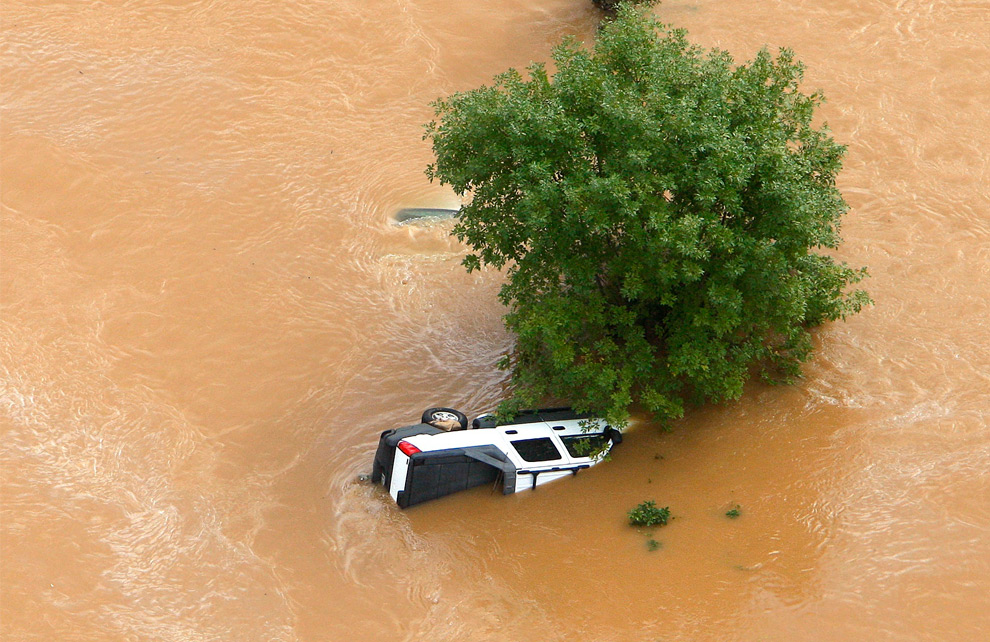 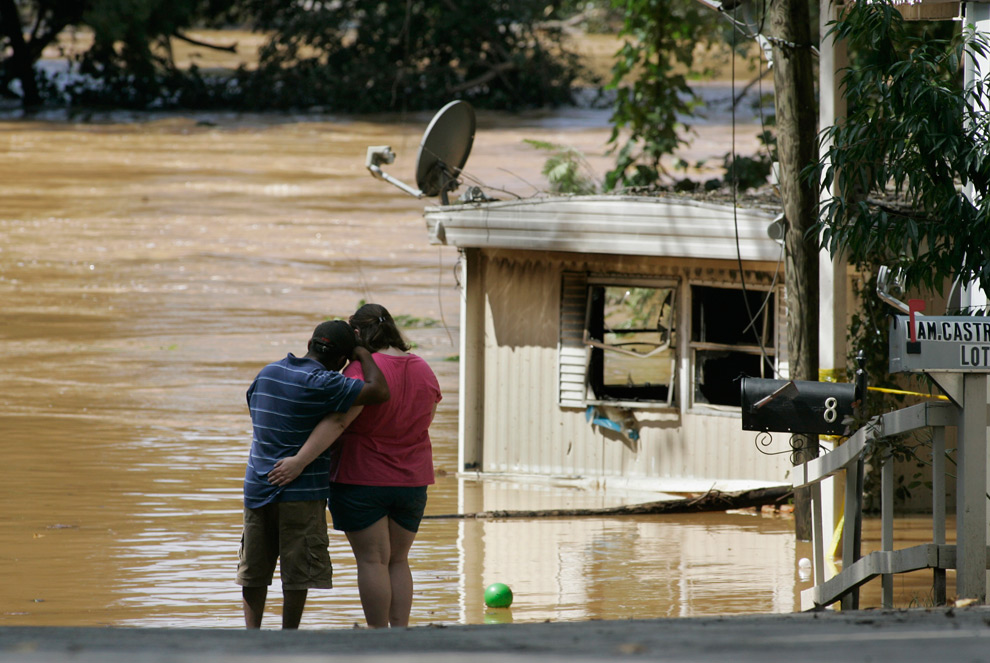 16
Jennifer Bozeman, 19, and Nabor Torres stand at the edge of Sweetwater Creek after it overflowed its banks and left the mobile home park where they live flooded Tuesday, Sept. 22, 2009, in Austell, Ga. (AP Photo/John Amis) # 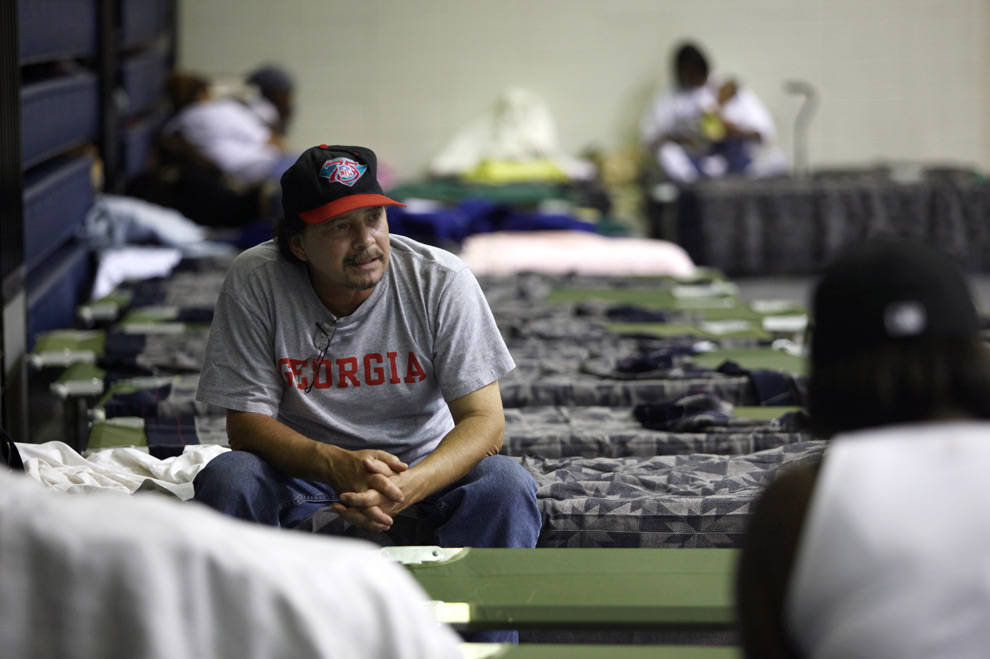 17
Calby Haught of Austell, Georgia rests at the American Red Cross emergency shelter September 22, 2009 in Marietta, Georgia. Haught escaped chest-level water that was consuming his mobile home in Austell and spent four hours in the water helping other flood victims. Flooding due to rain forced people out of their homes and closed hundreds of streets around metro Atlanta. The American Red Cross set up an emergency shelter at the Cobb Civic Center in Marietta for displaced flood victims. (Jessica McGowan/Getty Images) # 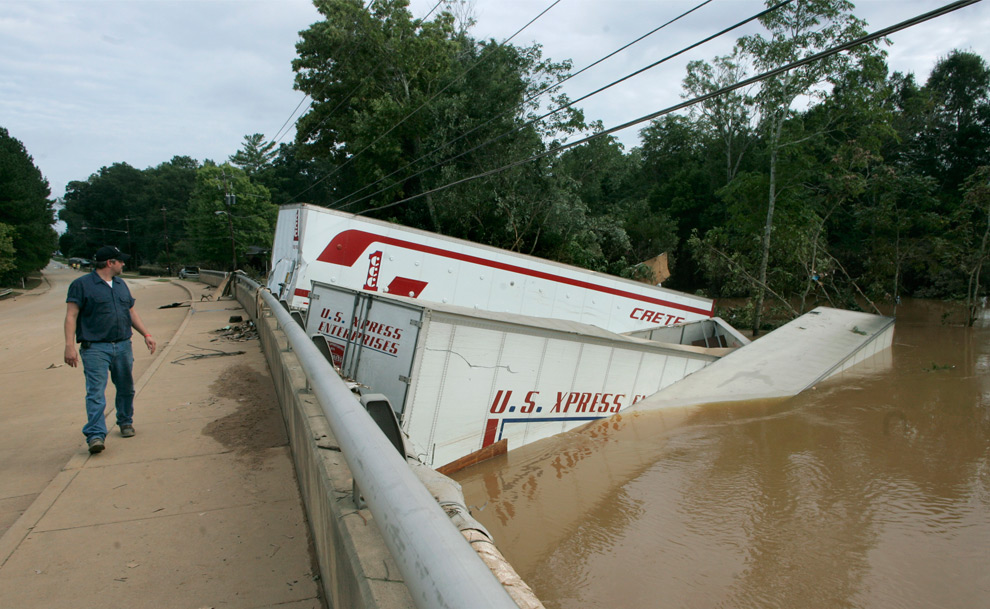 18
An unidentified man looks back at tractor trailer cars washed against a bridge going over Sweetwater Creek, left there by flood waters from recent rains, Wednesday, Sept. 23, 2009, in Austell, Ga. (AP Photo/John Amis) # 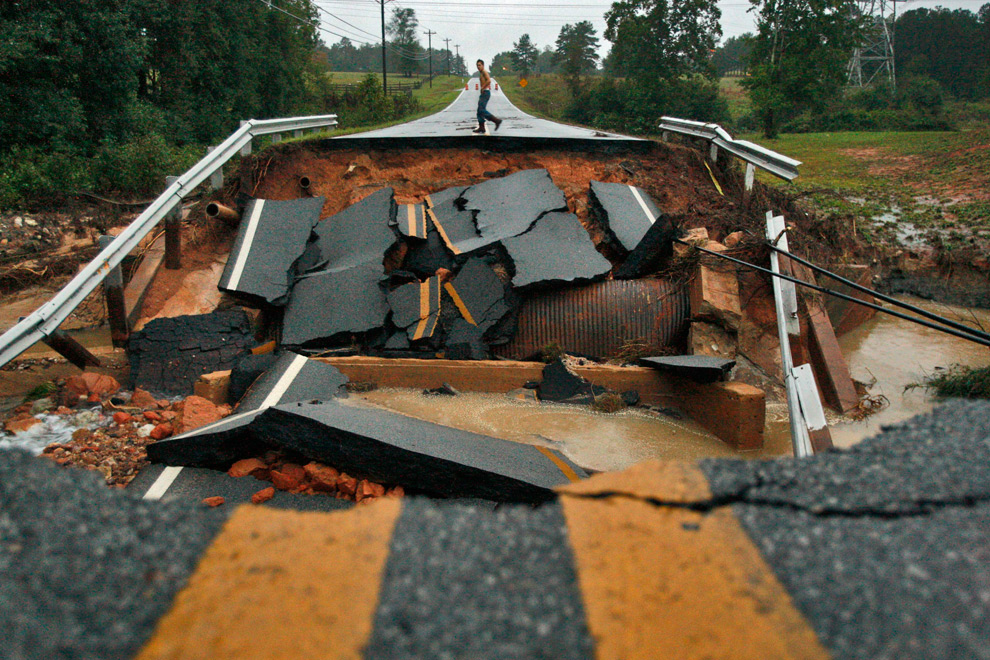 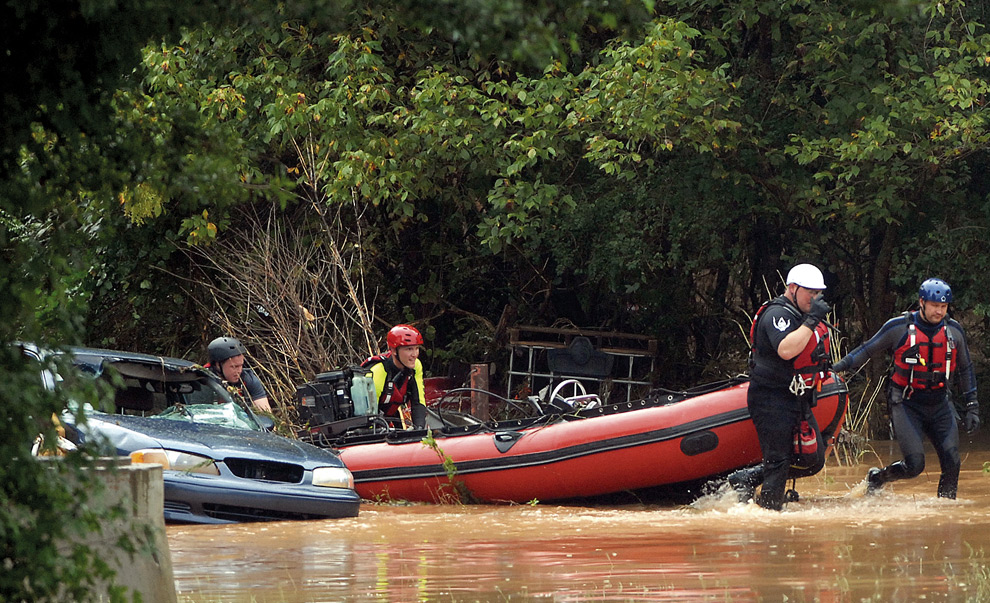 20
Gwinnett fire crews retrieve a rescue boat in the Yellow River on Monday, Sep. 21, 2009 off Arcado Road in Lilburn, Ga. The boat overturned earlier in the day and was pushed down stream. The vehicle shown was swept away from a nearby lot. (AP Photo/Jason Braverman, Gwinnett Daily Post) # 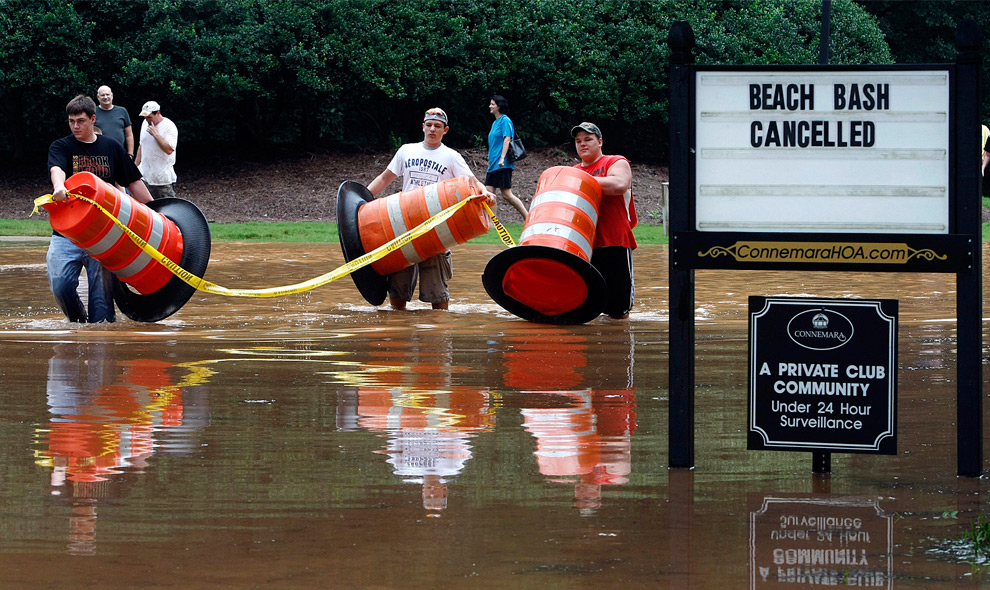 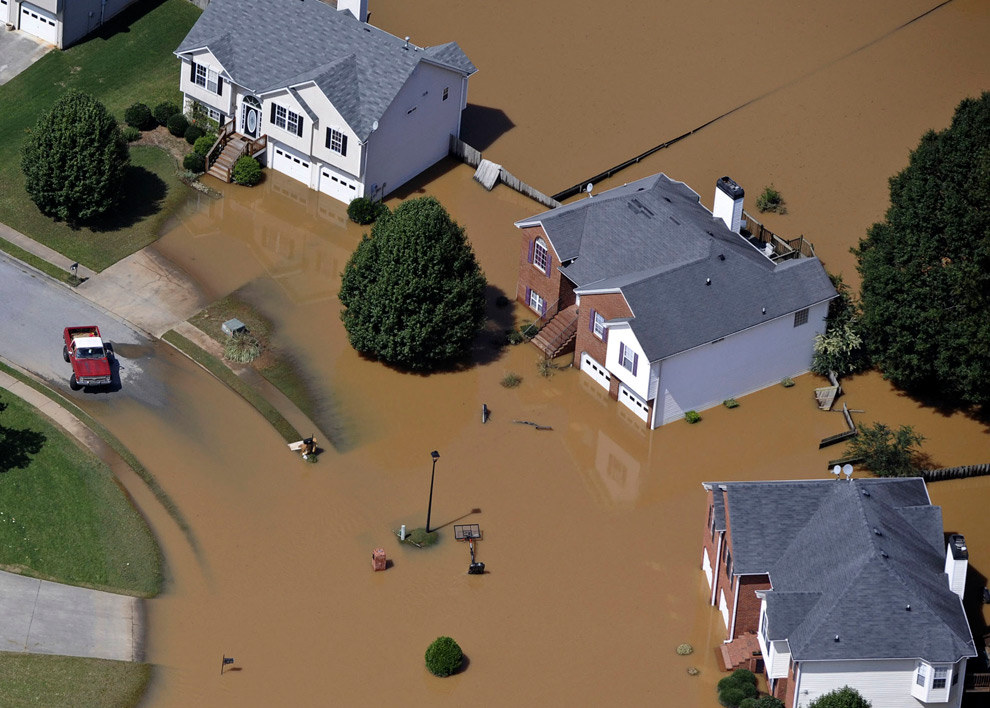 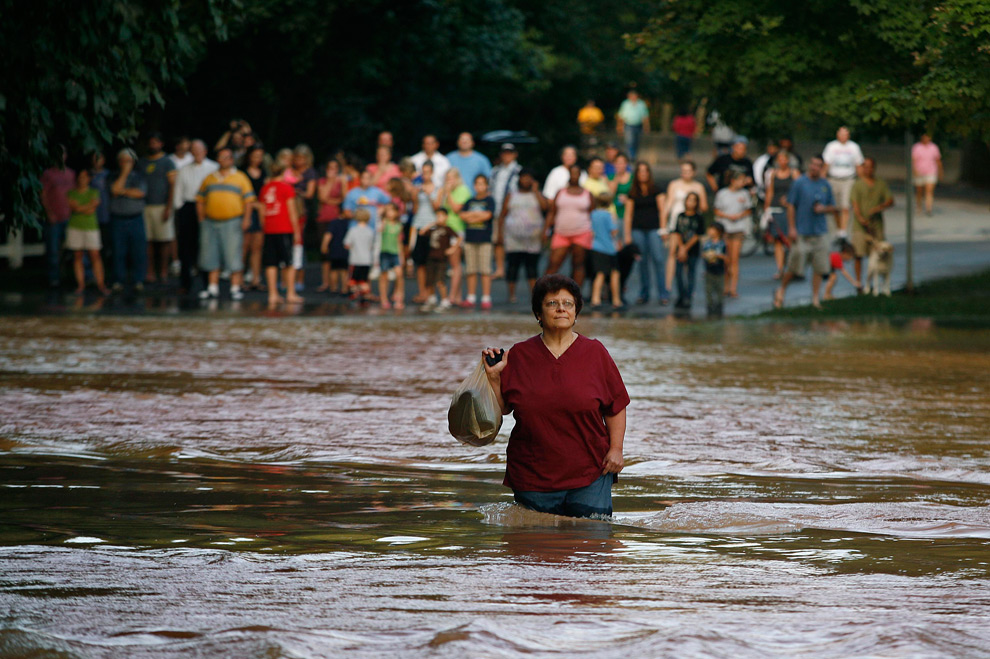 23
Ruxandra Tocito braves a flooded road to head to her nursing job at Emory Hospital from her subdivision, which was cut off due to flooding from heavy rains, in Lawrenceville, Georgia September 22, 2009. (REUTERS/Tami Chappell) # 24
John Knox takes his kayak back to his house on Paces Ferry Drive as he ferried supplies to and from his house which is 5 feet underwater in Vinings, Ga. on Tuesday, Sept. 22, 2009. The Chattahoochee River's level near Vinings was at 27.36 feet before daybreak Tuesday after cresting at 28.1 feet overnight, the second highest on record, exceeded only by a crest of 29 feet in 1919. (AP Photo/The Atlanta Journal & Constitution, John Spink) # 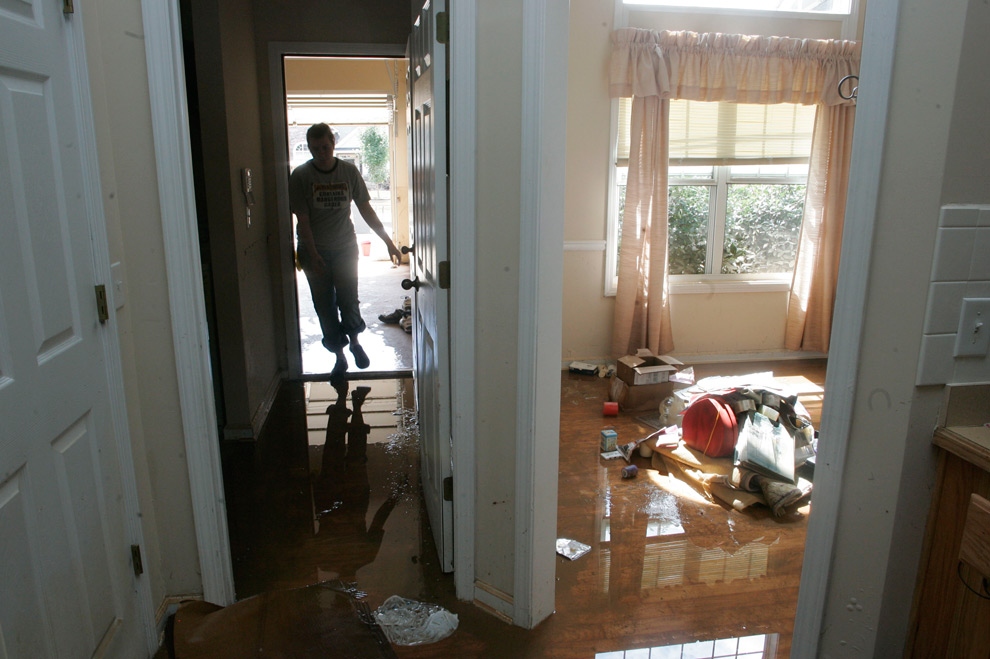 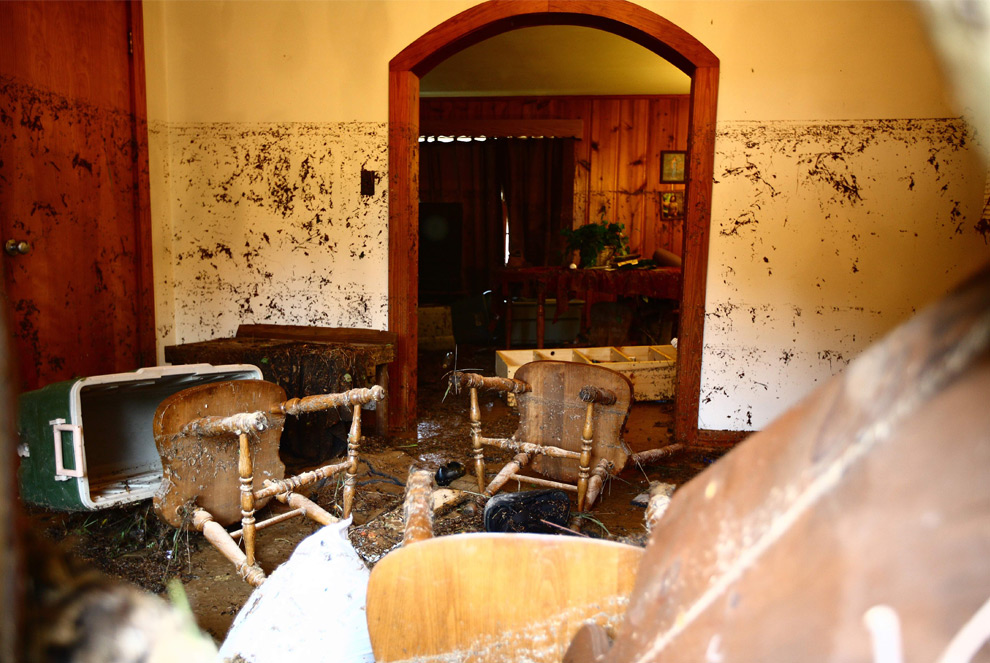 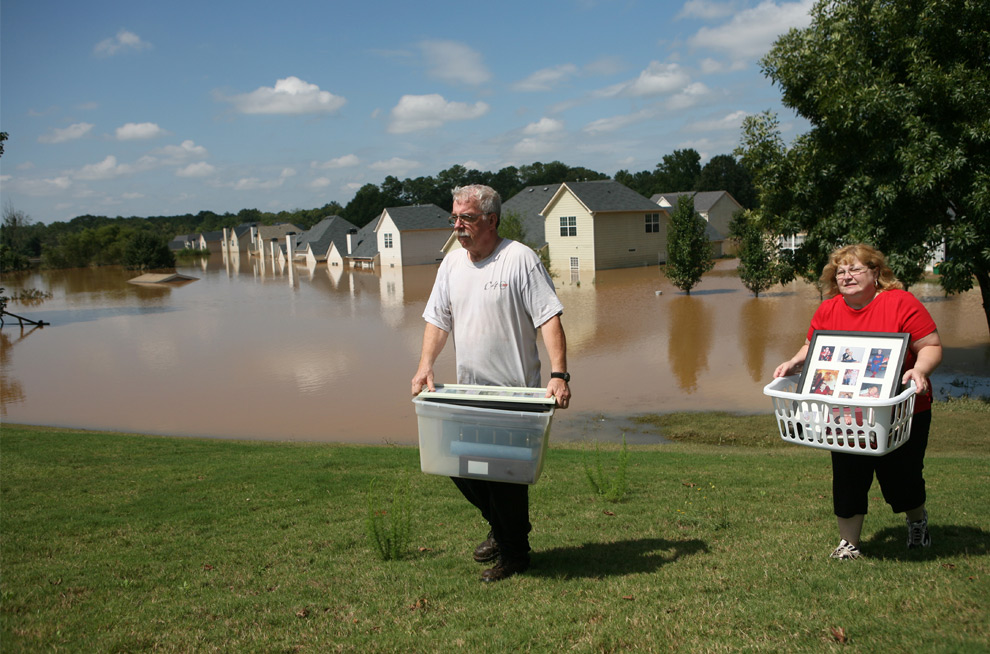 28
Steve Logan removes items from his sister's home with the help of a neighbor, Becky Bentley in the Mulberry Creek subdivision September 22, 2009 in Austell, Georgia. (Jessica McGowan/Getty Images) # 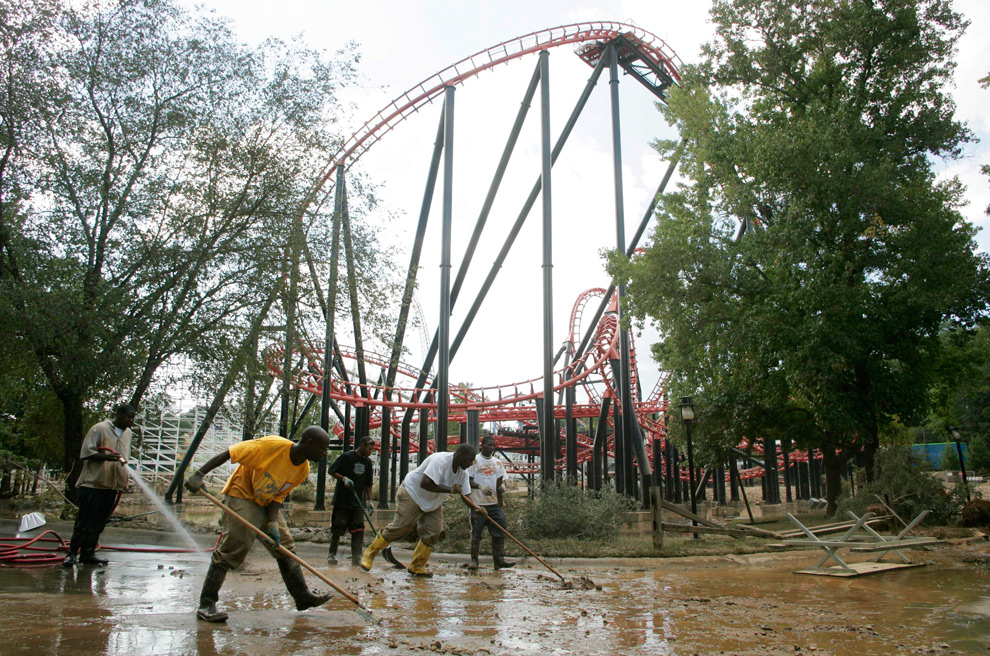 29
Grounds crew including Michael Watts, Jr., second from left, work at cleaning up mud and debris at the foot of the Ninja roller coaster, left by flood waters that inundated Six Flags over Georgia amusement park, Thursday, Sept. 24, 2009, in Atlanta. (AP Photo/John Amis) #