Cambodia and its War Tribunal

Last month, Cambodia began a trial for crimes against humanity that took place three decades earlier. The U.N.-backed tribunal has indicted and is now trying five former Khmer Rouge officials for crimes against humanity and war crimes during the years of 1975-79. In that short span, while the Khmer Rouge was in power, an estimated 1.4 million Cambodians died (possibly up to 2 million) due to Khmer policies, which included forced labor, outright executions, starvation, and torture - for an idea of the magnitude, click here for a visualization. All these acts were part of the Khmer Rouge's disastrous effort to dismantle their society and build a communist utopia. Now, 30 years later, Cambodia is still recovering - a young country, with over 50% of the population younger than 25, millions of leftover land mines, extreme poverty and a still-rebuilding agricultural system. Collected here are some recent photos from Cambodia, its people, the tribunal and more. Special thanks to my friend Alicia Conway, currently in Phnom Penh. (28 photos total) 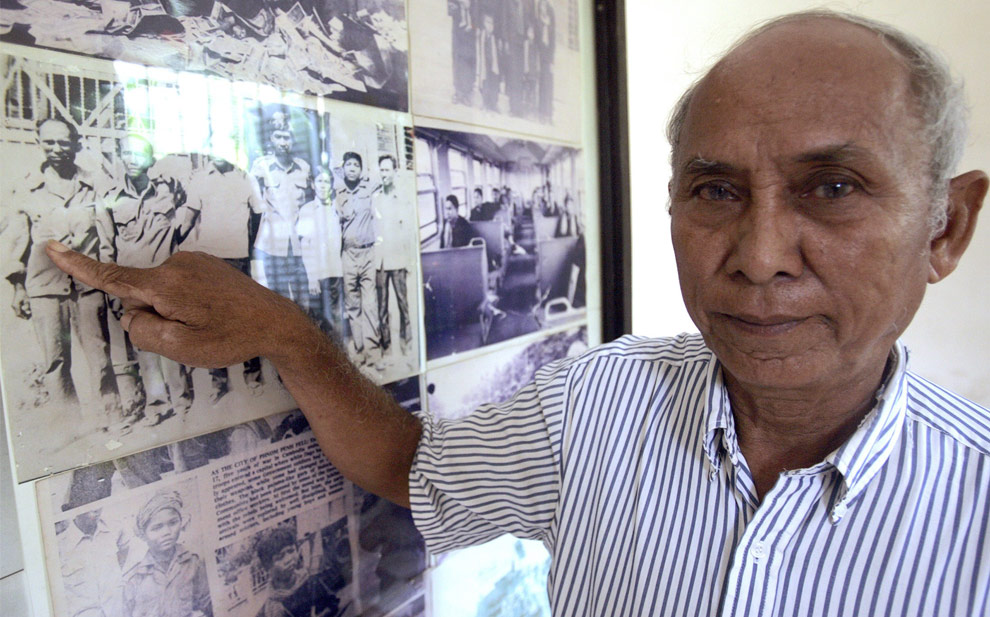 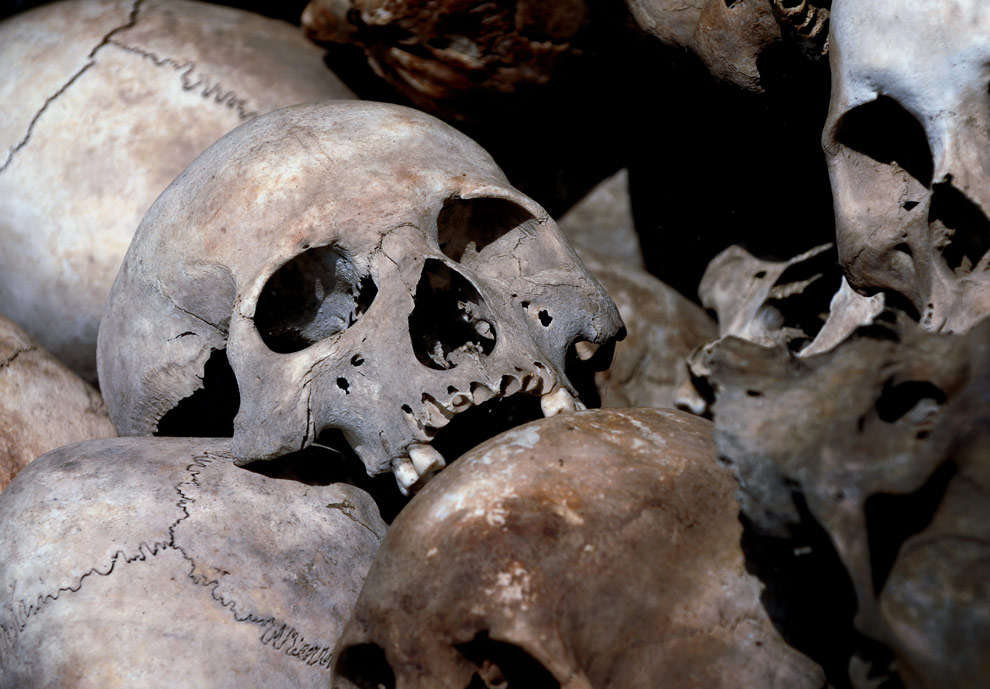 2
Skulls of victims are piled up on display at the Choeung Ek memorial stupa south of Phnom Penh, Cambodia on February 10, 2009, marking the "killing fields" where the ruling Khmer Rouge executed thousands of people between 1975 and 1979. (NICOLAS ASFOURI/AFP/Getty Images) # 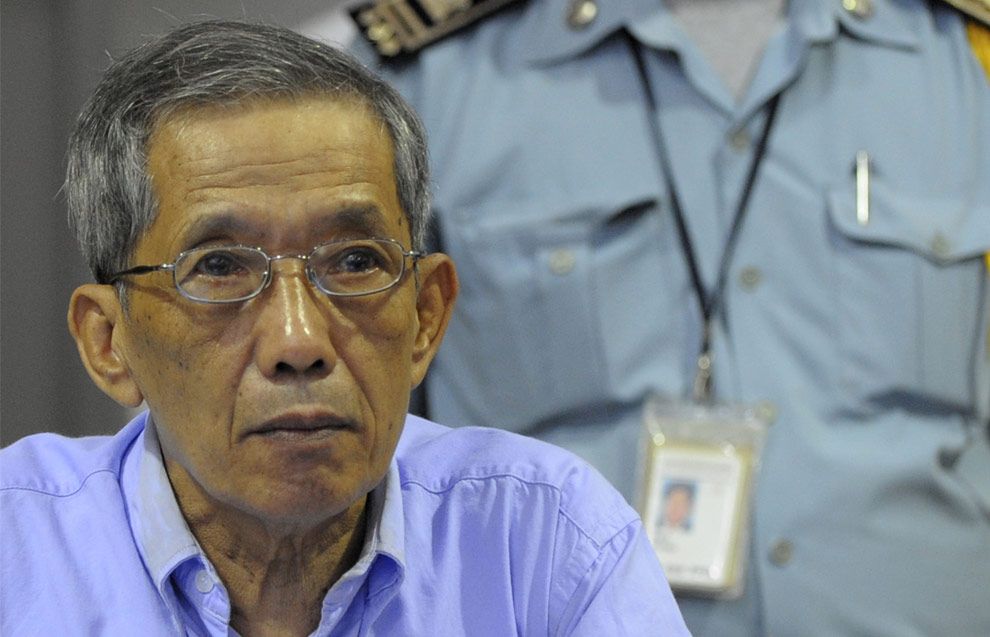 3
Former Khmer Rouge prison commander, 66-year-old Duch, whose real name is Kaing Guek Eav, under guard at the opening of his trial before the Extraordinary Chamber in the Courts of Cambodia (ECCC) in Phnom Penh. Cambodia on February 17, 2009. He faces charges of crimes against humanity over his iron-fisted rule at Tuol Sleng prison, where he is accused of presiding over the deaths of at least 15,000 men, women and children. (ADREES LATIF/AFP/Getty Images) # 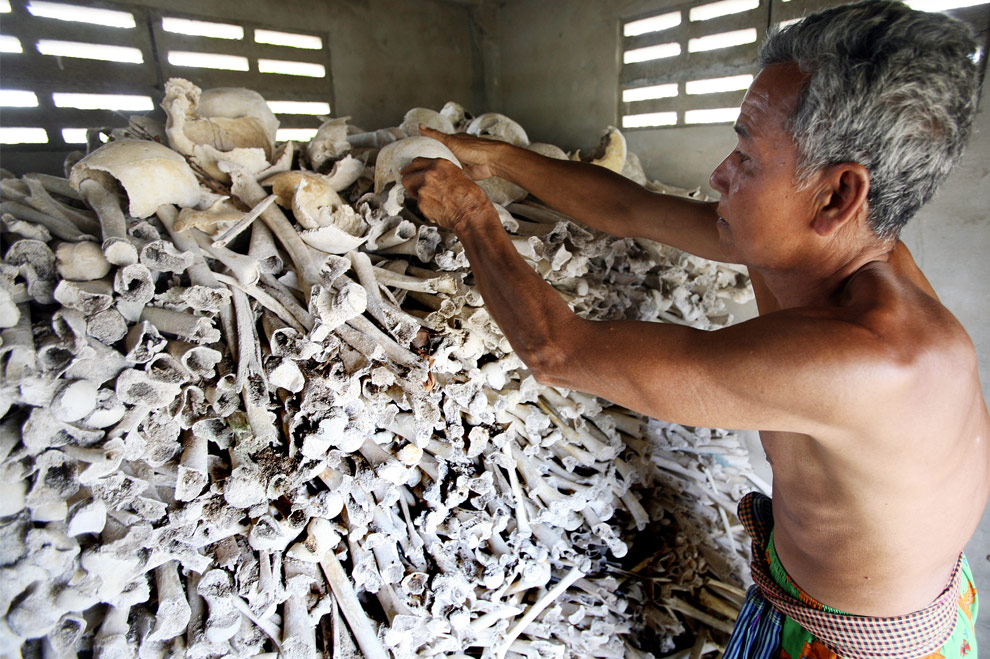 4
Cambodian Sao Phen prepares bones of victims of the Khmer Rouge inside a stupa in Kandal province, some 50 kilometers south of Phnom Penh on January 30, 2009. (TANG CHHIN SOTHY/AFP/Getty Images) # 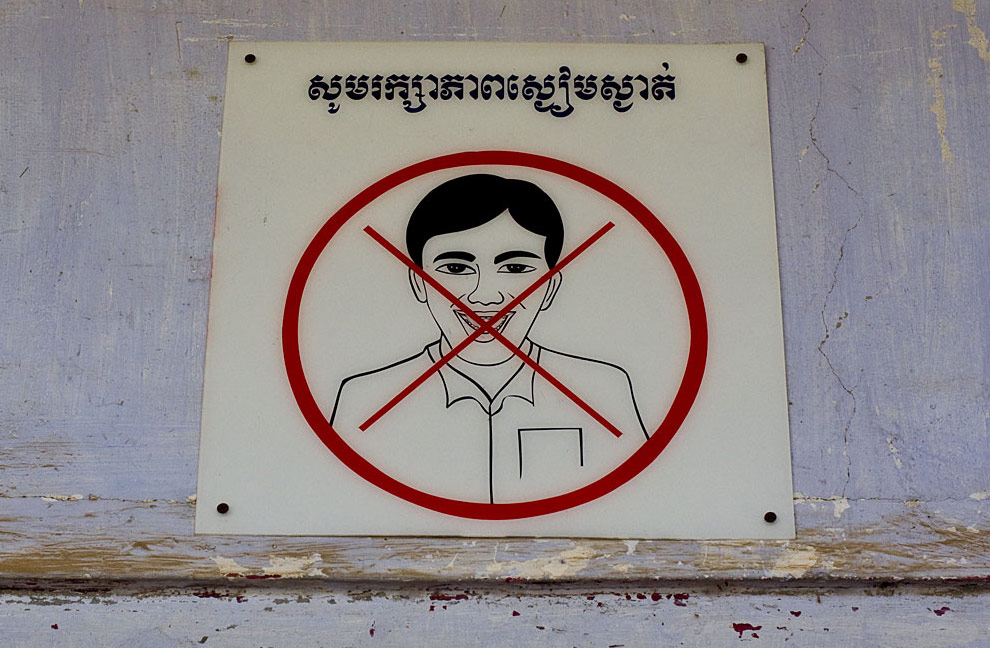 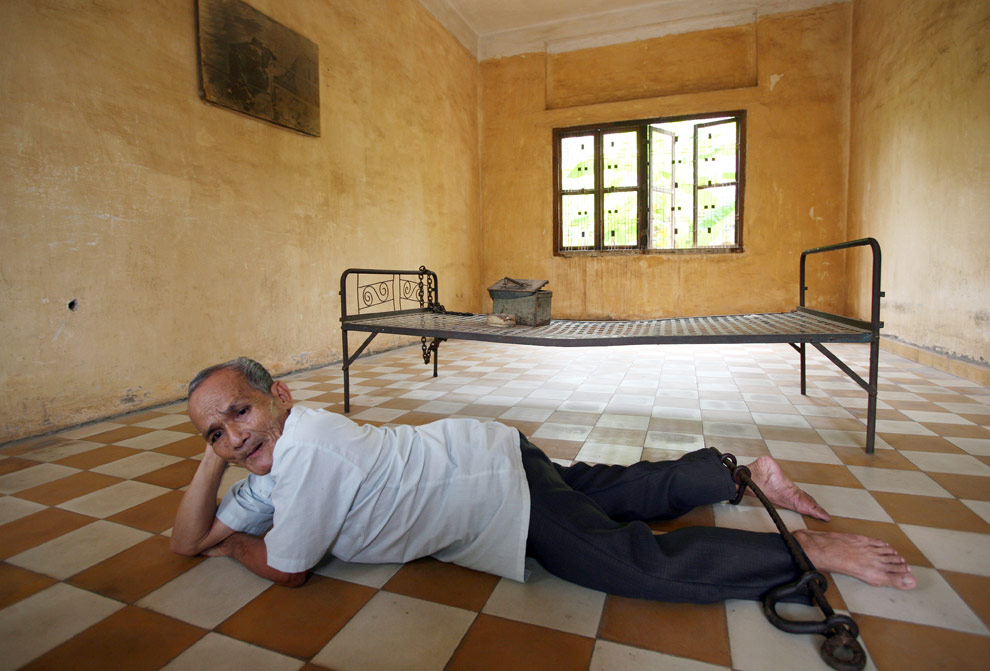 6
A Cambodian survivor of Security Prison 21 (S-21), lies next to a bed as he demonstrates the wearing of shackles around his ankles at Tuol Sleng genocide museum in Phnom Penh on February 5, 2009. (TANG CHHIN SOTHY/AFP/Getty Images) # 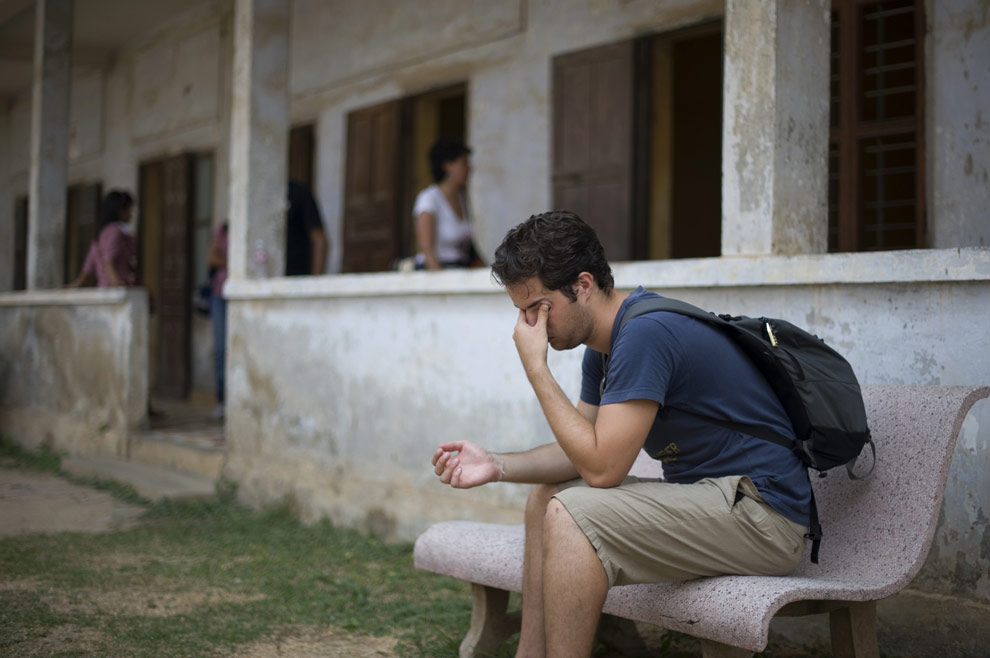 7
A visitor sits on bench after visiting torture rooms of the Tuol Sleng Genocide Museum, also known as the notorious Security Prison 21, in the center of Phnom Penh on February 16, 2009. (REUTERS/Adrees Latif (CAMBODIA) # 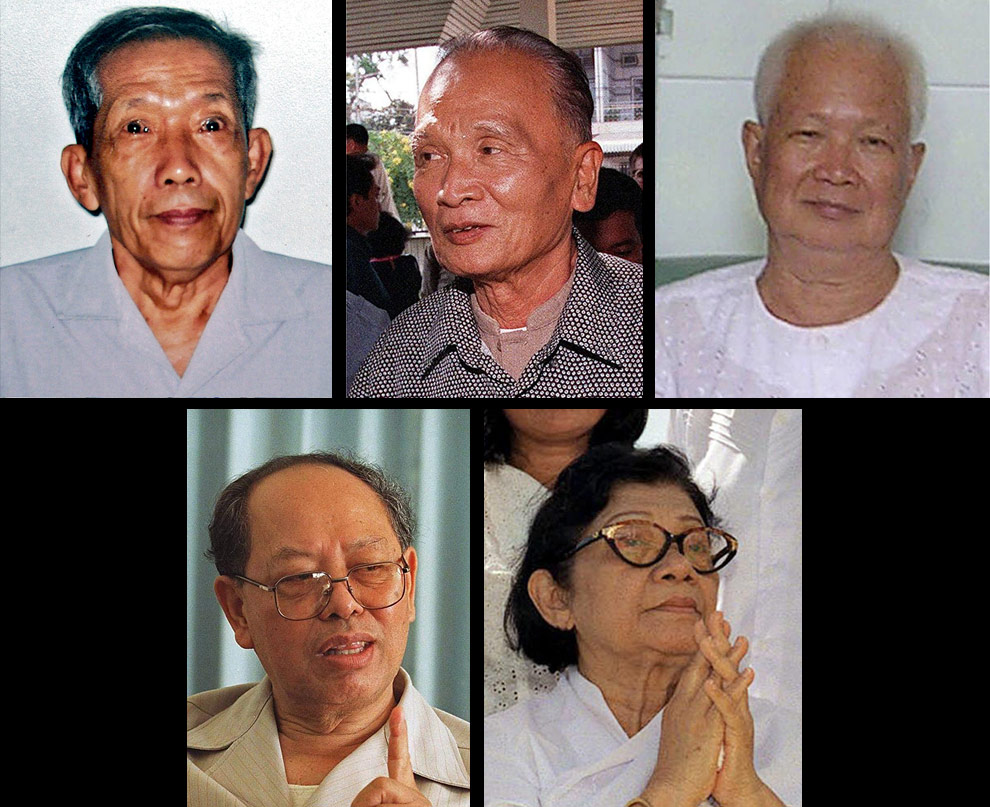 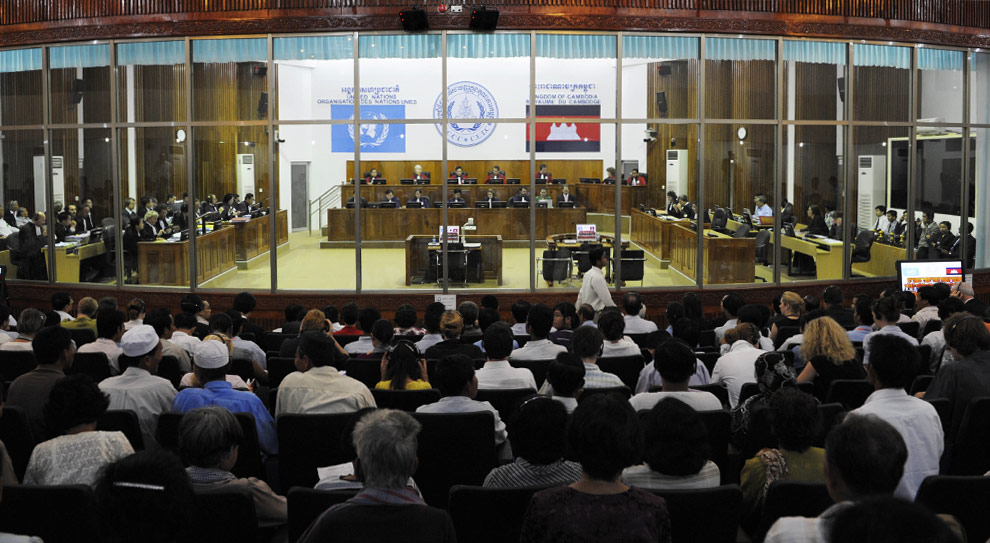 9
Cambodians look on during the first day of a U.N.-backed tribunal Tuesday, Feb. 17, 2009, inside the Extraordinary Chambers in the Courts of Cambodia in Phnom Penh, Cambodia. Kaing Guek Eav, who headed the S-21 prison in Phnom Penh, went before Cambodia's genocide tribunal Tuesday for its first trial over the deaths of an estimated 1.7 million people at the hands of the Khmer Rouge regime more than three decades ago. (AP Photo/Adrees Latif) # 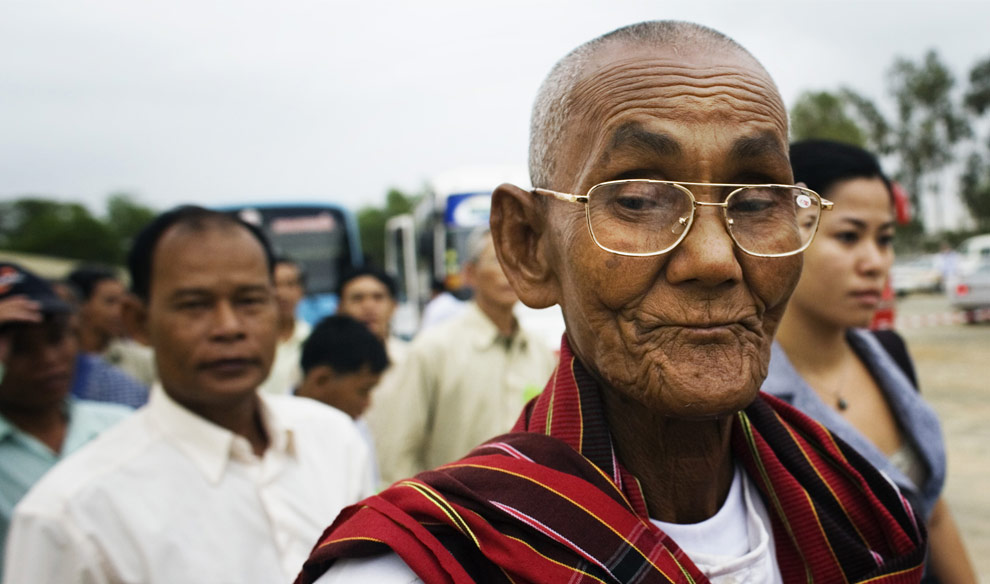 10
Cambodians gather Tuesday, Feb. 17, 2009, outside the Extraordinary Chambers in the Courts of Cambodia as the first day of a U.N.-backed tribunal was set to get underway. (AP Photo/David Longstreath) # 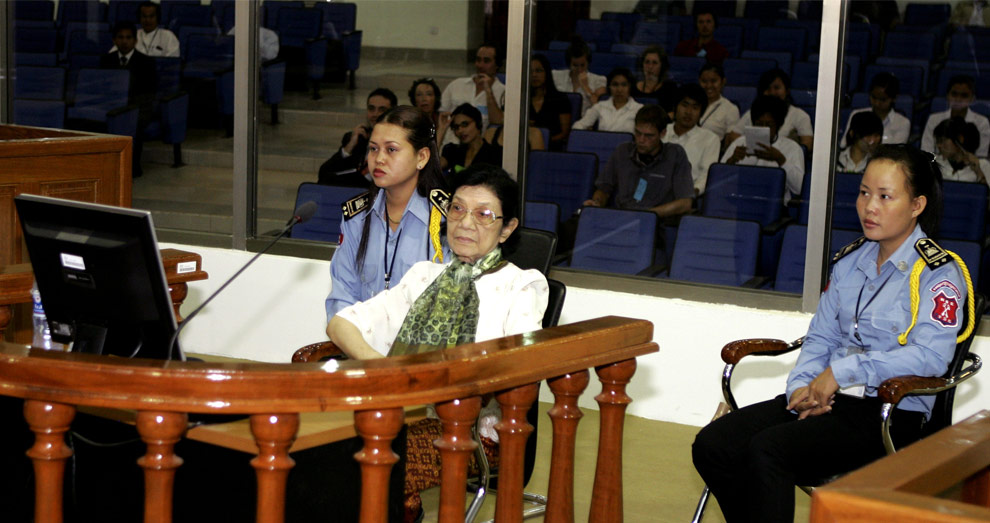 11
Ieng Thirith, center, a former Khmer Rouge social affairs minister and wife of its foreign minister Ieng Sary, sits next to securities personnel during a hearing at the U.N.-backed genocide tribunal in Phnom Penh, Cambodia, Tuesday, Feb. 24, 2009. The former female minister of the Khmer Rouge regime shows her second appeal Tuesday for release from pre-trial detention by Cambodia's genocide tribunal where she is being held on charges of crimes against humanity. (AP Photo/Heng Sinith) # 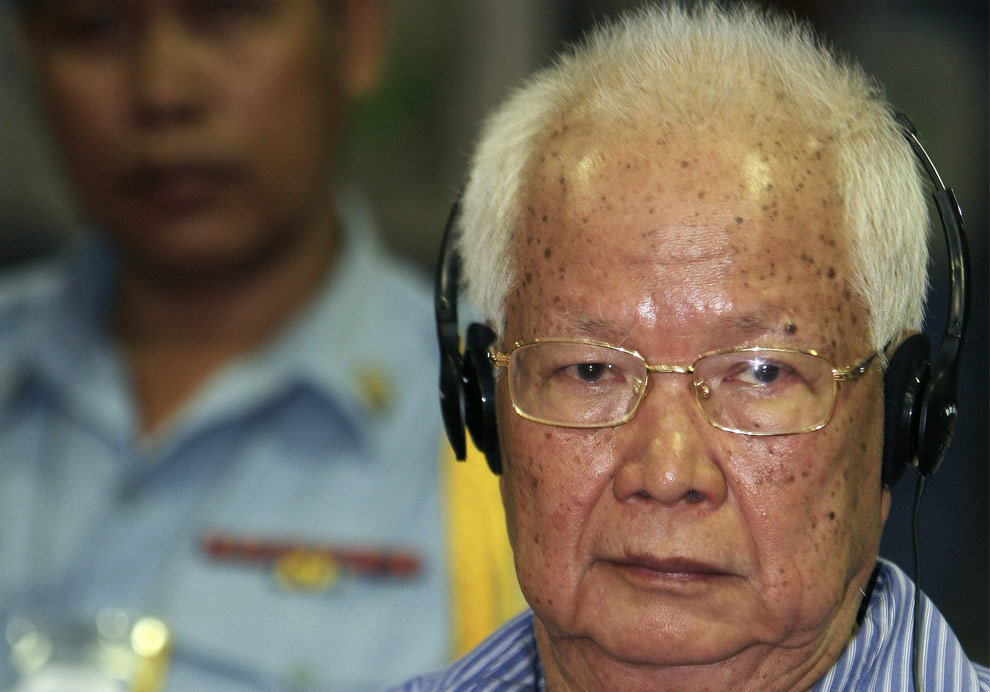 12
Former Khmer Rouge leader and head of state Khieu Samphan sits in the dock during his 4th pre-trial chamber public hearing at the Extraordinary Chambers in the Courts of Cambodia on the outskirts of Phnom Penh February 27, 2009. Kieu Samphan is charged with war crimes and crimes against humanity. (REUTERS/Tang Chhin Sothy/Pool) # 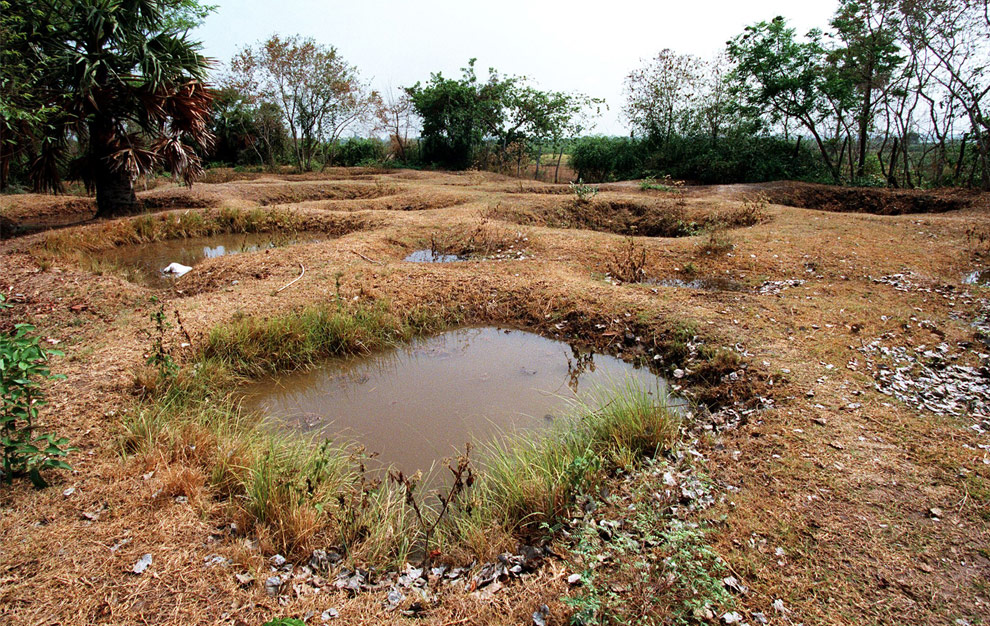 13
This file photo taken on April 18, 1998 shows opened mass graves at the Choeung Ek "Killing Fields" near the capital Phnom Penh where intellectuals who were tortured and interrogated at Toul Sleng prison were brought and killed by the Khmer Rouge. (MANUEL CENETA/AFP/Getty Images) # 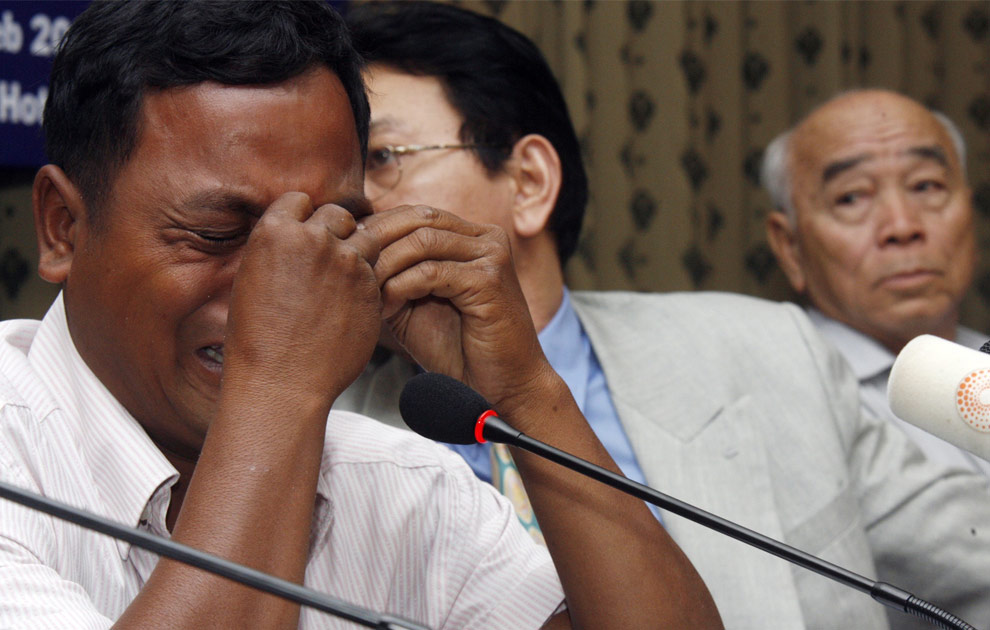 14
Norng Chan Phal, who survived the Khmer Rouge genocide torture centre S-21 as a child in 1979, weeps during a news conference held with former Vietnamese soldier and combat photographer Ho Van Tay (right), who filmed S-21 as his troops chased Pol Pot's rebels from Phnom Penh in 1979, and who rescued Norng from S-21 as well, in Phnom Penh February 16, 2009. (REUTERS/Chor Sokunthea) # 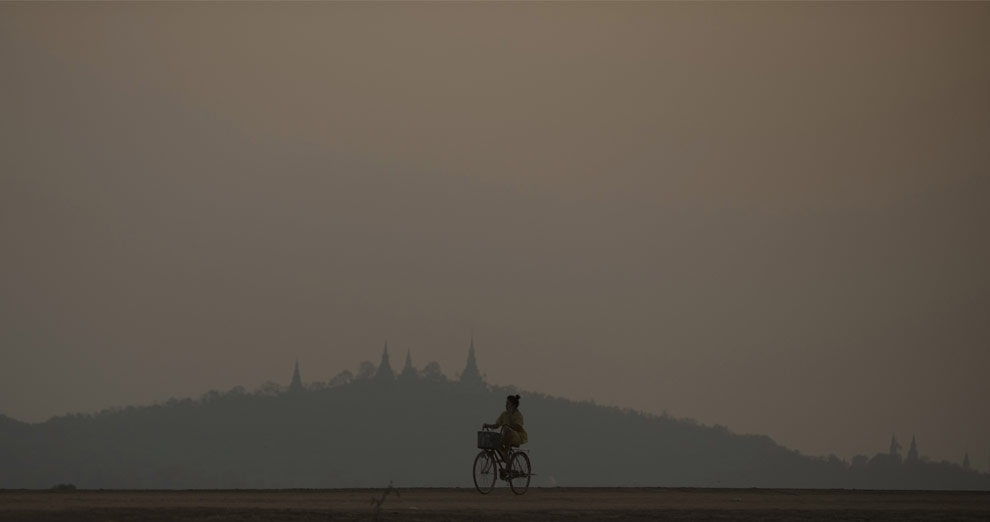 15
A woman rides her bike past temples upon hilltops near Udong, in the outskirts of Phnom Penh, Cambodia on February 15, 2009. (REUTERS/Adrees Latif) # 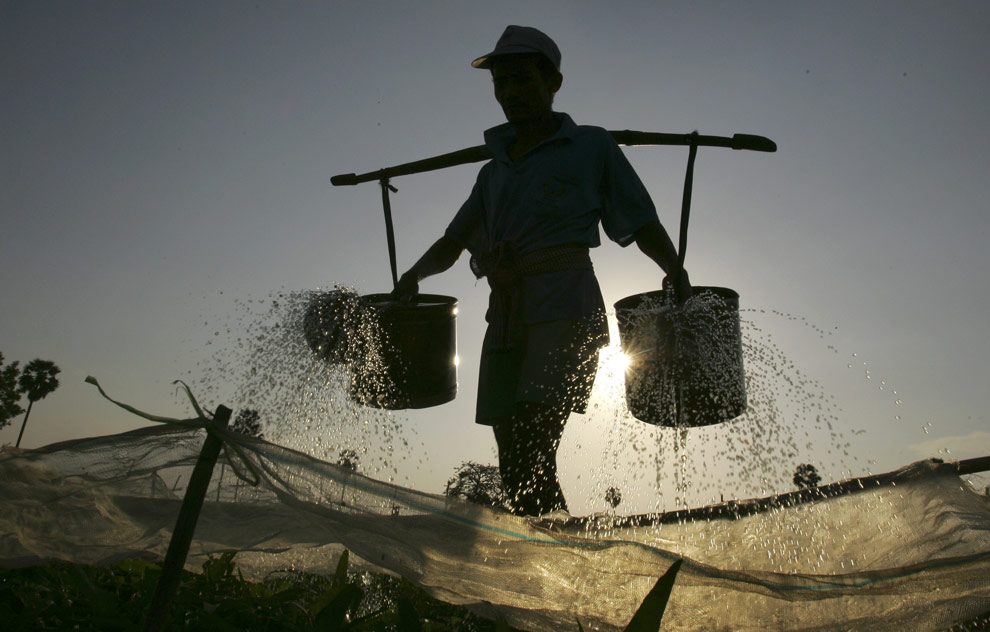 16
A Cambodian farmer waters his vegetables outside of Phnom Penh, Cambodia, Monday, March 2, 2009. Cambodia remains an agricultural country with 80 percent of its population working as rural farmers. (AP Photo/Heng Sinith) # 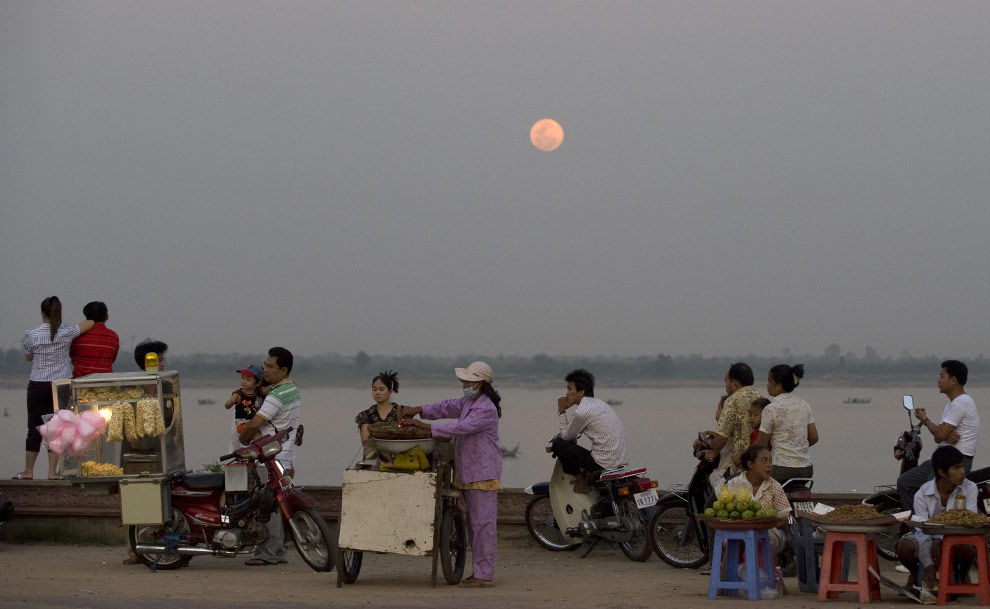 17
The moon is seen at sunset as locals gather near the bank of the banks of the Tonle Sap river in Phnom Penh on February 9, 2009. (REUTERS/Adrees Latif) # 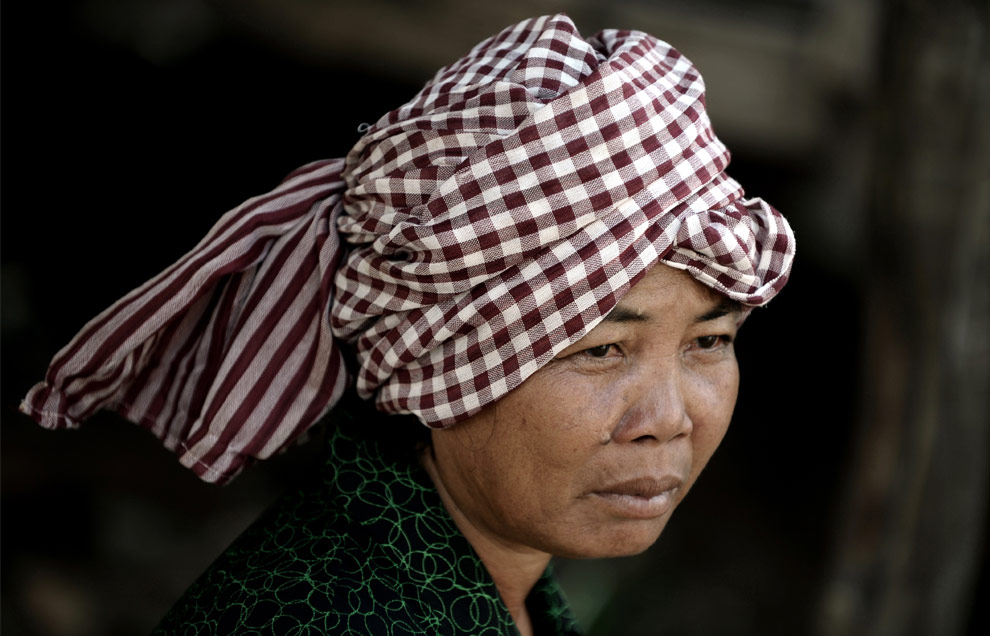 18
A Khmer woman wearing a traditional scarf called a Kroma sits outside her home in Taches village on the outskirts of Phnom Penh on February 13, 2009. (NICOLAS ASFOURI/AFP/Getty Images) # 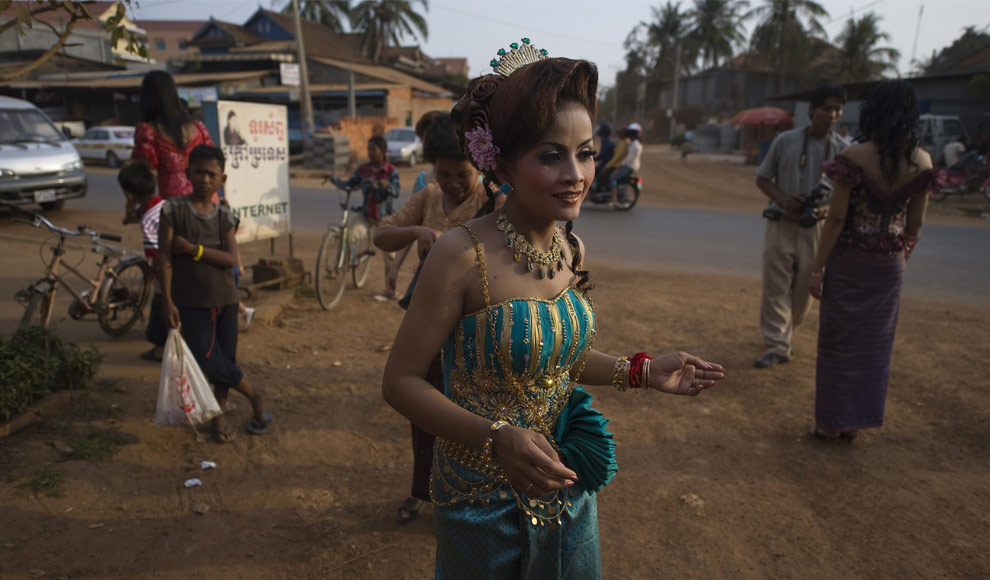 19
A bride stands on the roadside as she welcomes guests to her reception near Udogn, in the outskirts of Phnom Penh, Cambodia on February 15, 2009. (REUTERS/Adrees Latif) # 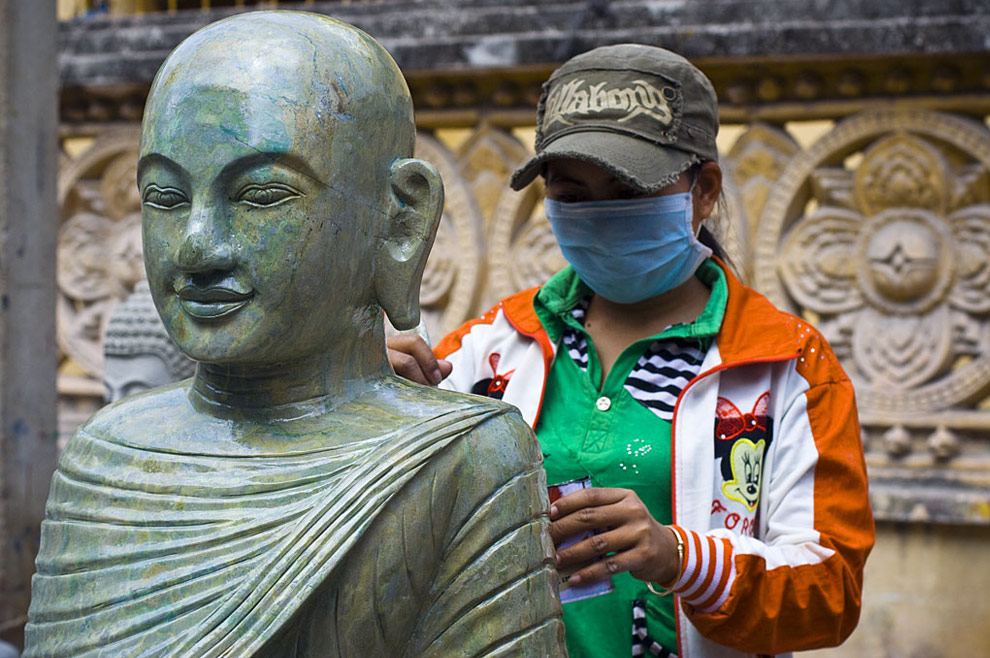 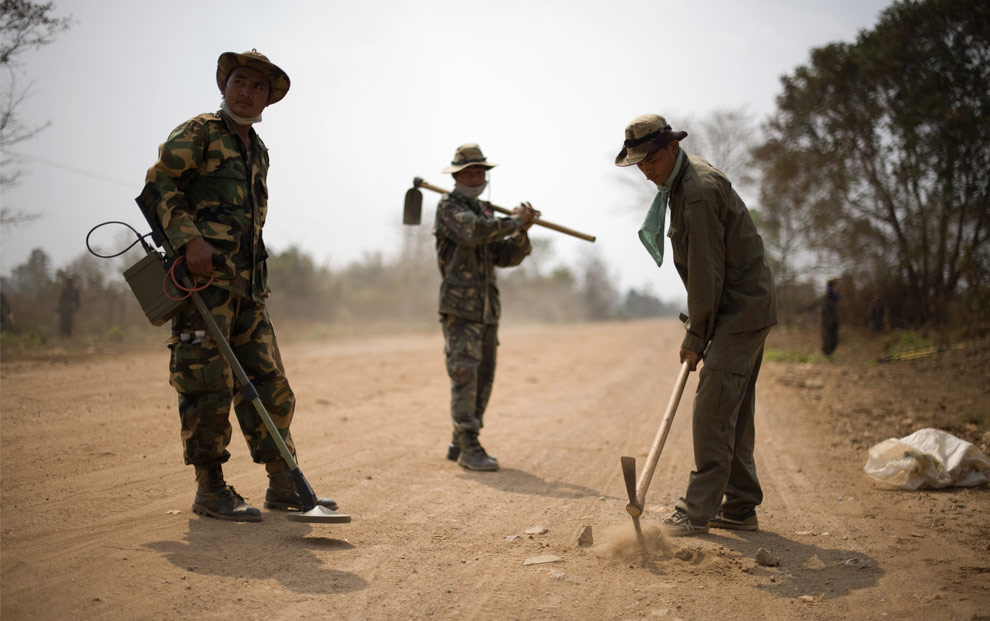 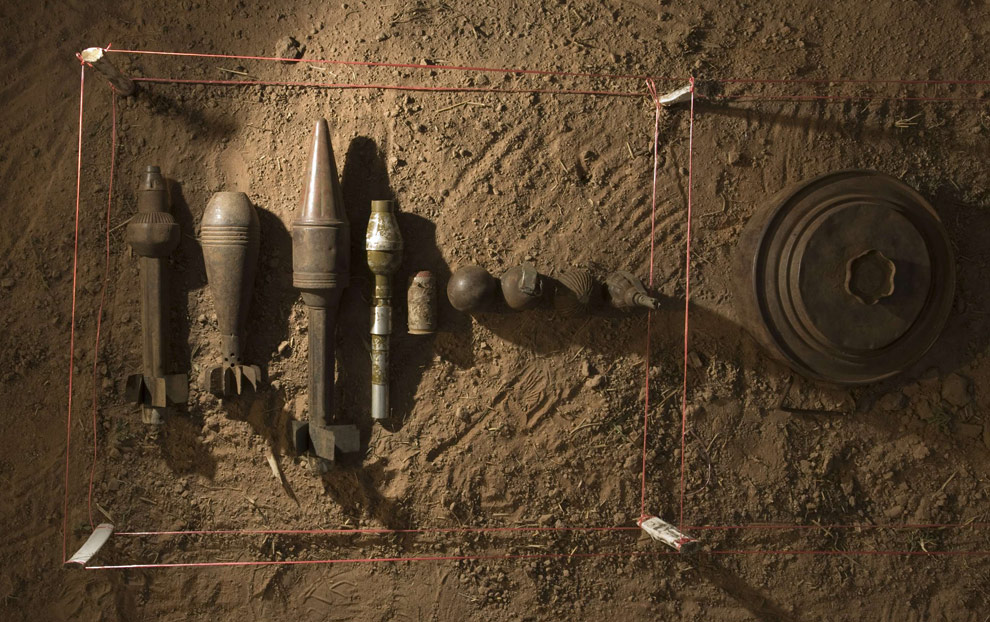 22
Unexploded ordinance sits displayed near a land-mine field outside of Cambodia's western city of Battambang on February 12, 2009. (REUTERS/Adrees Latif) # 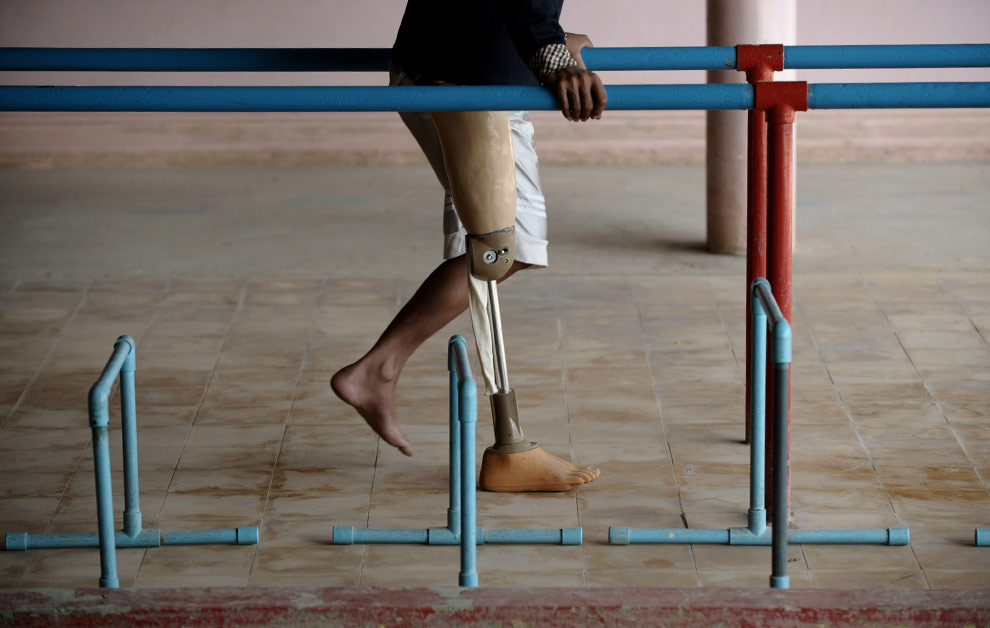 23
A disabled man exercises on February 18, 2009 at the Kien Khleang Physical Rehabilitation center that treats victims of landmines and road accidents outside Phnom Penh. Cambodia's civil war ended in 1998, but millions of mines still litter the country in the aftermath of three decades of fighting. (NICOLAS ASFOURI/AFP/Getty Images) # 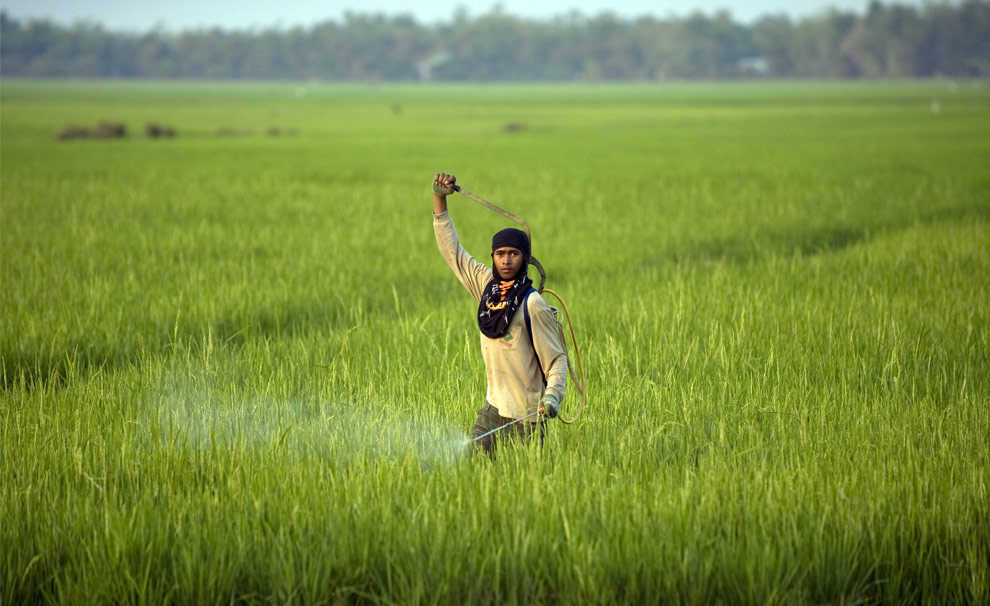 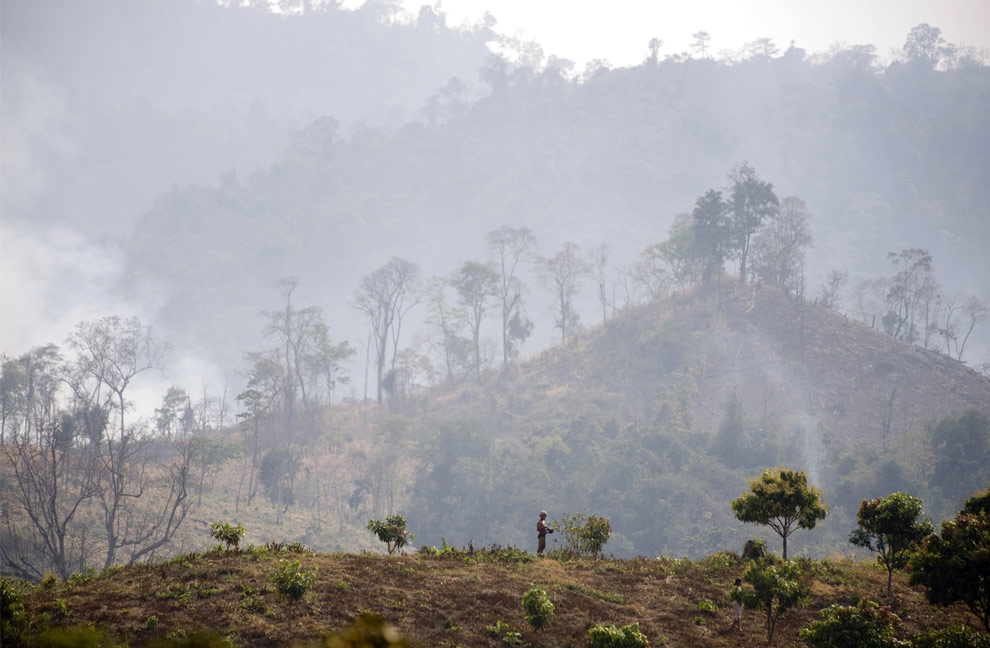 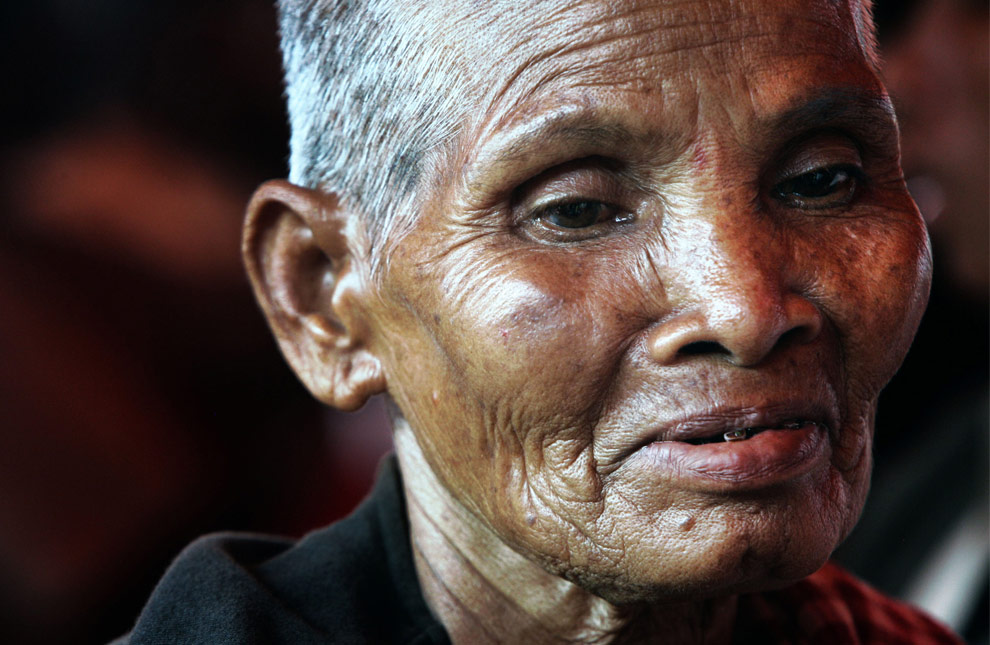 27
An older Cambodian woman looks on during the funeral of a former Khmer Rouge leader in Anlong Veng, Cambodia, Saturday, July 22, 2006. (David Longstreath/AP) # 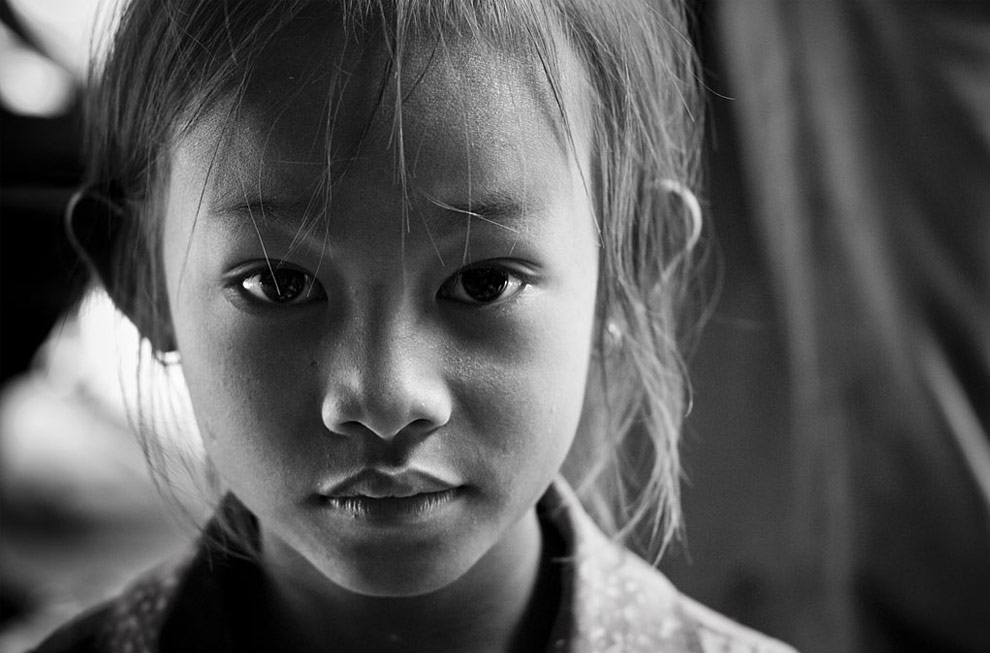