Today's entry is a collection shared by photographer Peter Carr, from an event in Liverpool, England last year. Said Peter: "As part of Liverpool's Capital of Culture year, the French group La Machine were commissioned to create a large piece of street theatre, on the scale of their earlier work, the Sultan's Elephant. Many were expecting to see something using the iconic Liverbirds, the symbol of the city but instead we got a spider. The total cost of the event was £1.8 million and caused some complaints about how the funds could better be used. It also attracted protests from arachnophobe groups about how it would terrify some people. Despite these complaints the event drew in over 200,000 people in the few days it was on and produced something wondrous that got everyone in the region talking." All photos and captions courtesy Peter Carr, who has agreed to answer questions in the comments below. (23 photos total) 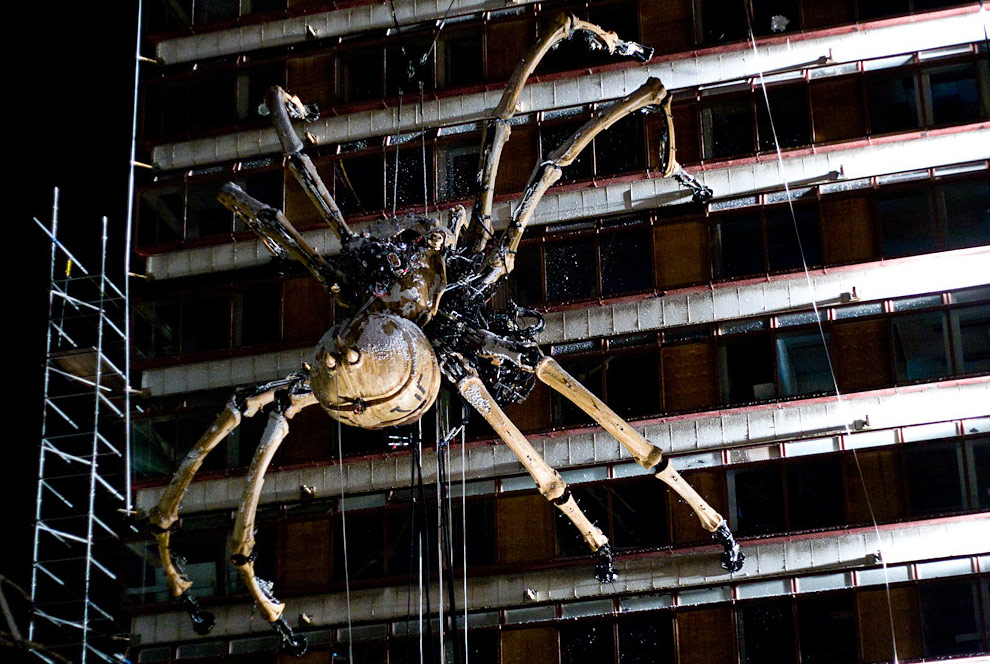 On Wednesday 3rd September 2008 Liverpool awoke to find a giant spider hanging from the side of a building. A team of scientists planned to move the spider to their research post setup by Albert Docks in the morning. Here, days later, the 50-foot tall "La Princesse" climbs back onto Concourse House and is dusted by magic snow sending her to sleep for the night. (© Peter Carr) 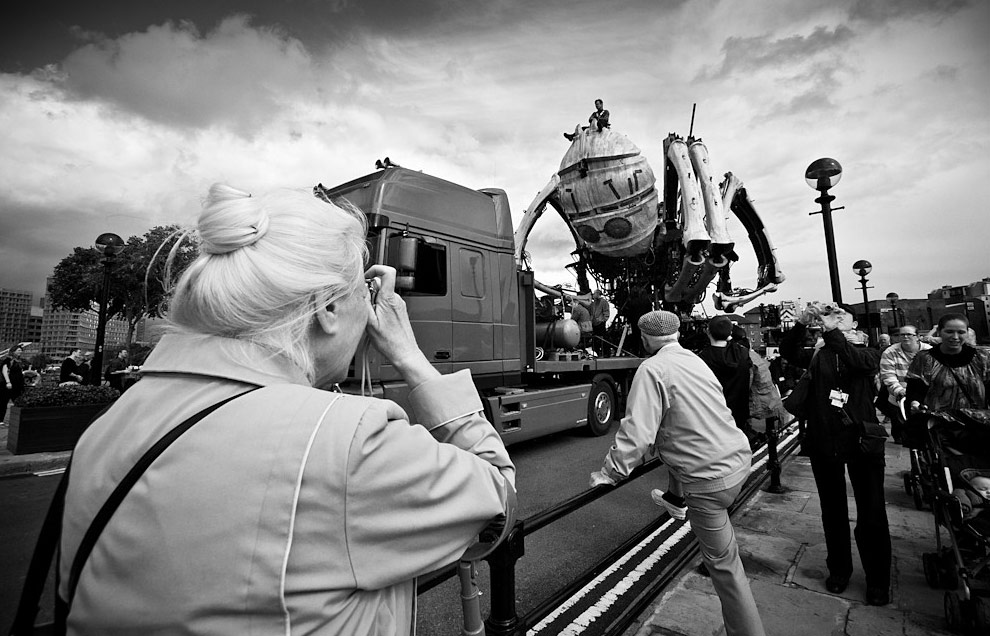 2
Thursday and La Princesse is transported across the city to Albert Dock. Everyone is looking out their office windows and taking to the streets to see the spider. (© Peter Carr) # 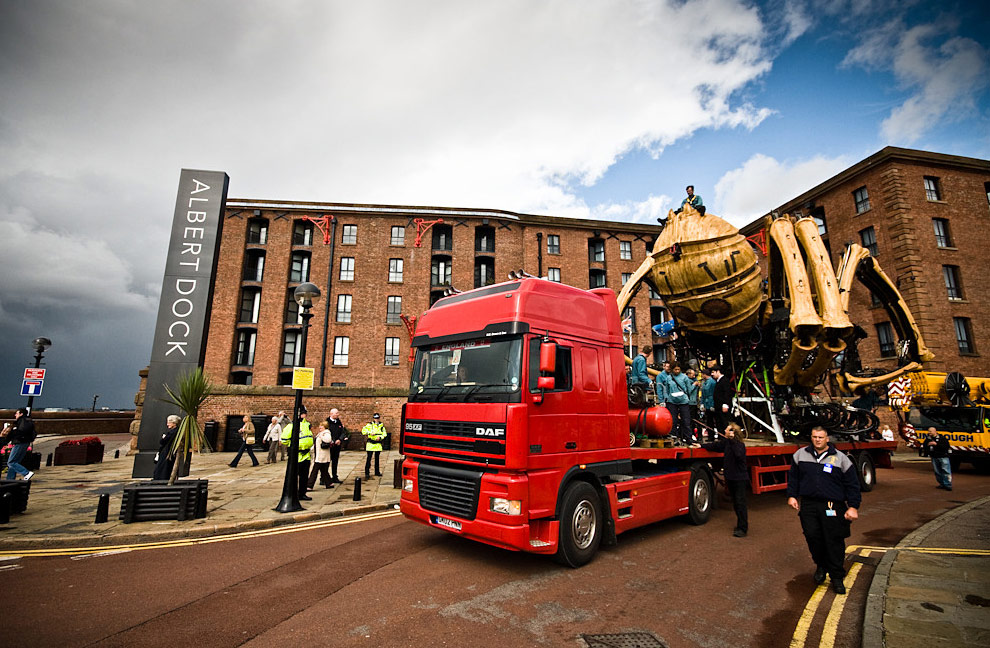 3
Minutes before a thunderstorm arrives in the city La Princesse arrives at Albert Dock. It took close to an hour to travel less than 10 minutes down the road. Traffic was redirected so the truck would be uniterrupted as it travelled across the city. (© Peter Carr) # 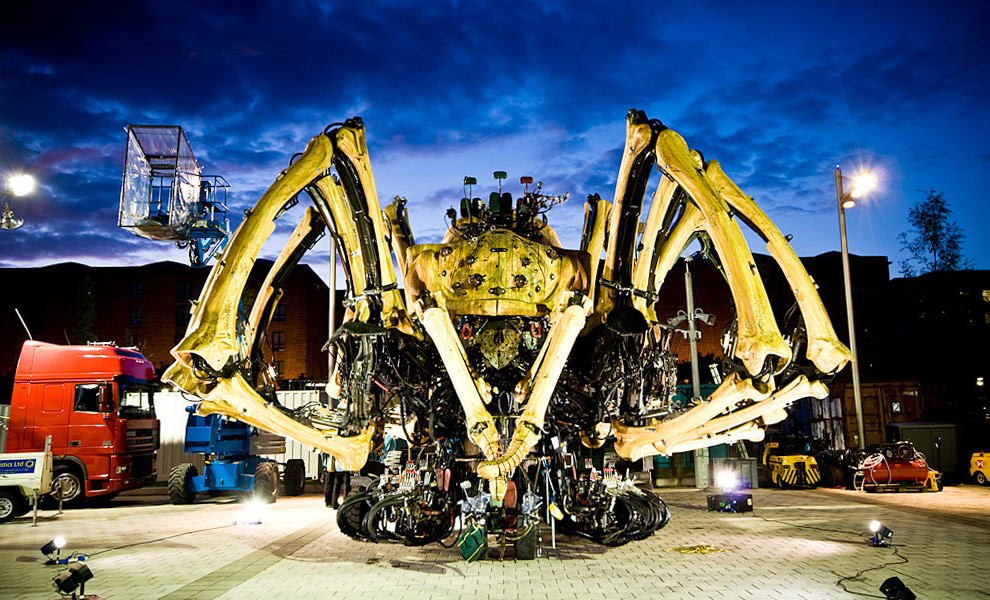 4
Night time falls on day 2 and people get a close up view of La Princesse. She's so close you can almost touch her. Music is played to sooth the giant spider and hundreds of people gather to simply sit and see the awe inspiring spider. For the first time you get an idea of how she'll move and just how far out her legs will reach. (© Peter Carr) # 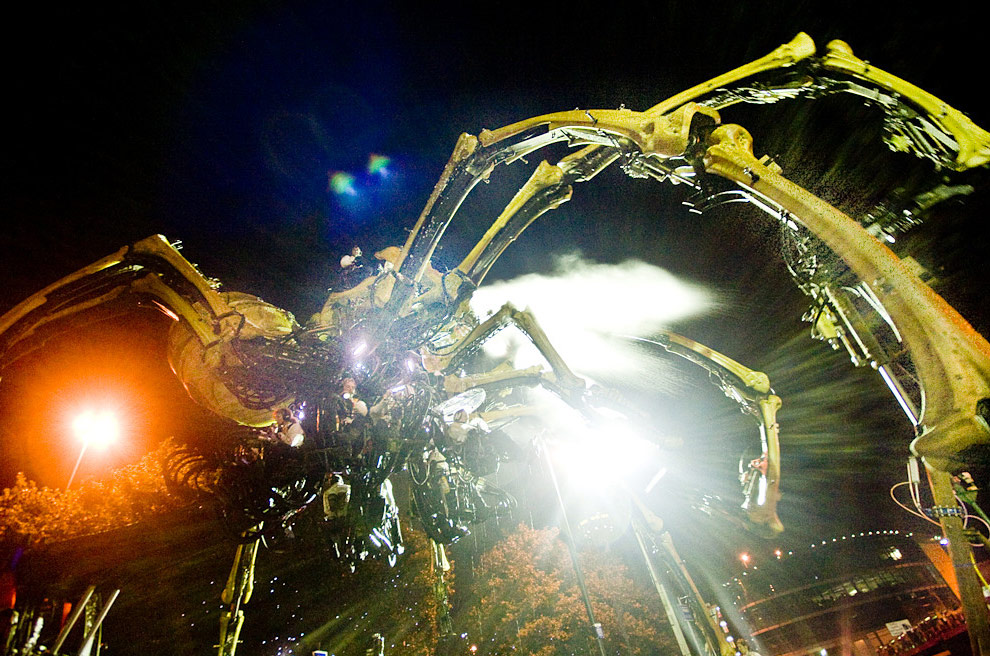 5
La Princesse is heading towards the Birkenhead tunnel in the hope of making a break for it. Her feet almost crush me and my gear here. The spider weighs over 37 tonnes. (© Peter Carr) # 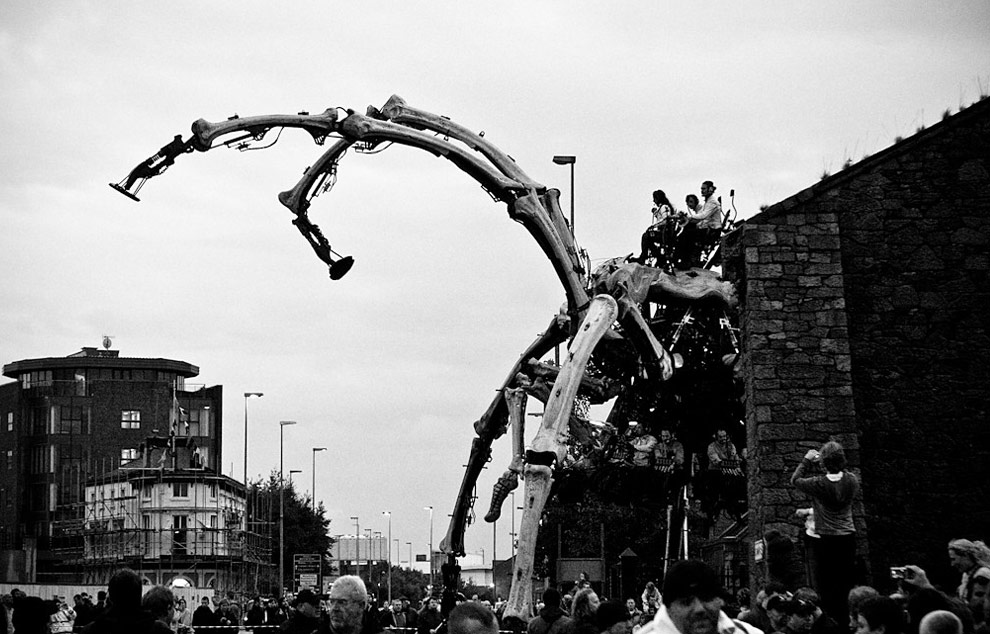 6
La Princesse heads out onto the main road and is greeted by thousands of people. Its an incredible event and despite the weather, which soon turns to torrential rain, everyone is just stunned by the giant spider. Its like nothing the city has ever seen. (© Peter Carr) # 7
By this point La Princesse is right behind me and the crowd is stunned by being this close to the spider. They don't move and the magic snow starts falling and the spider keeps coming. They're so wowed by it all. (© Peter Carr) # 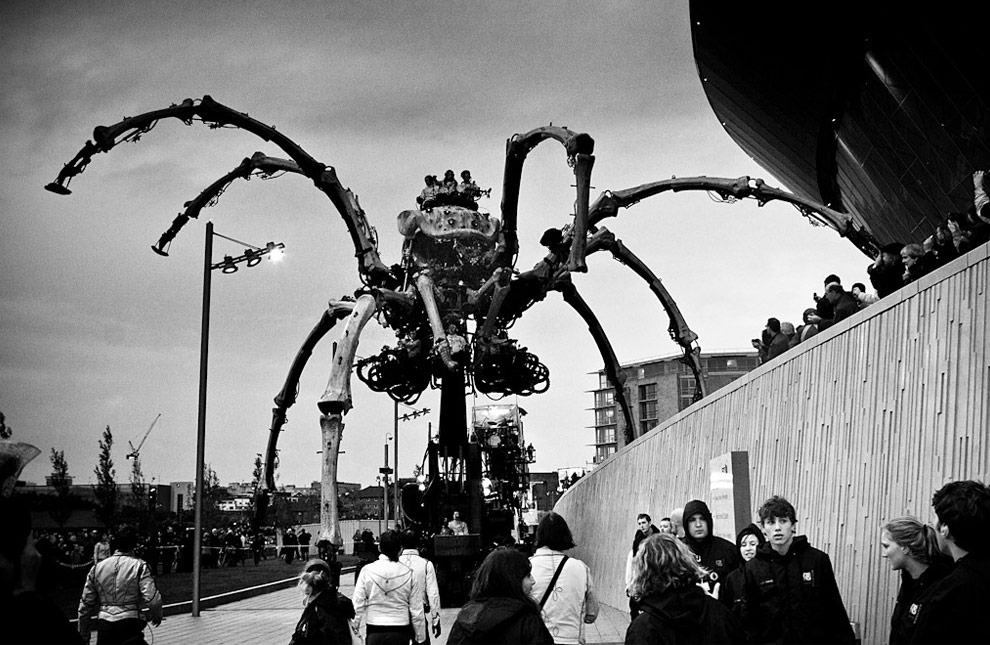 8
Later that day La Princesse wakes up again and she spots another way out. Nothing stops her and she heads out into the city. For the first time people really see the insanity behind La Machine. Its huge! (© Peter Carr) # 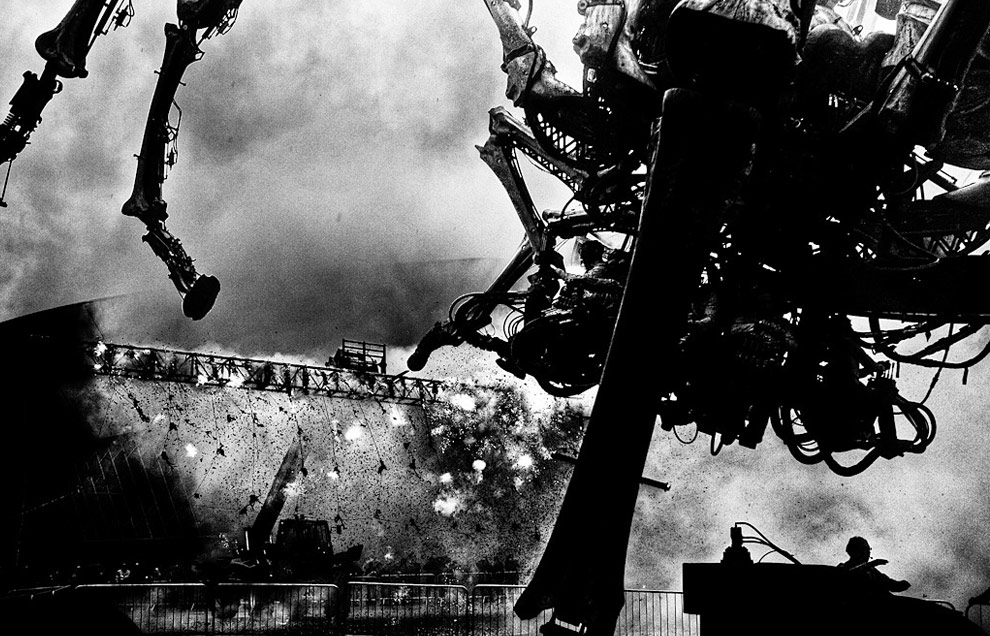 9
La Princesse wakes up one morning, and isn't happy. She heads up the steps by the Echo Arena and is forced back by firecrackers. They scare her back down the steps where she is played soothing music and magical snow falls to send her back to sleep. (© Peter Carr) # 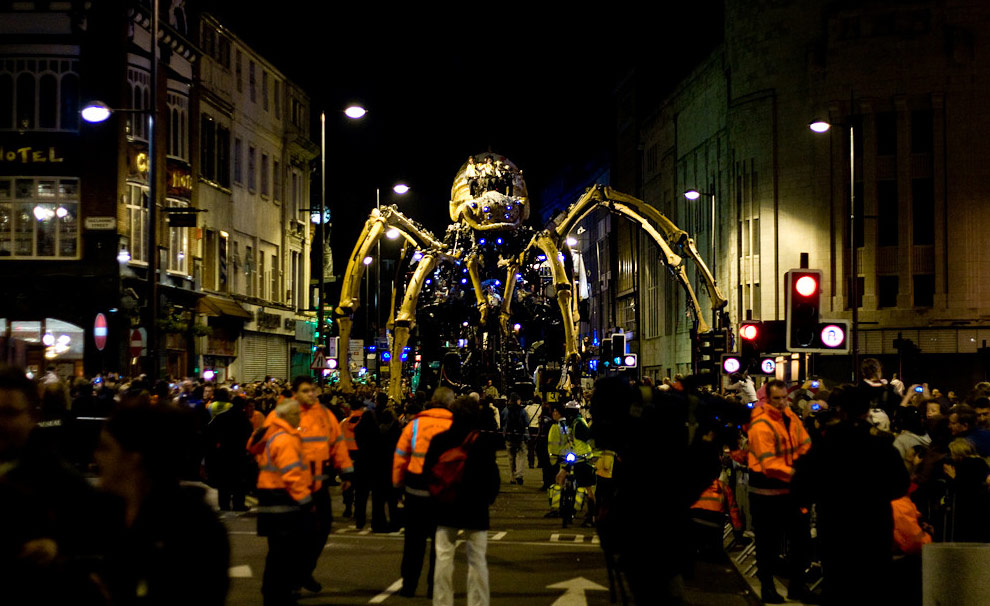 10
Day turns to night and La Princesse is looking like something from a science fiction movie, complete with special effects. She is heading down this street back to the building where she was first found, to sleep. (© Peter Carr) # 11
Day 4 and La Princesse heads off into the main city center. This is the view from Liverpool's Town Hall. Thousands of people gather, and La Princesse decides to squirt them all with jets of water. She is followed by musicians on cherry pickers. (© Peter Carr) # 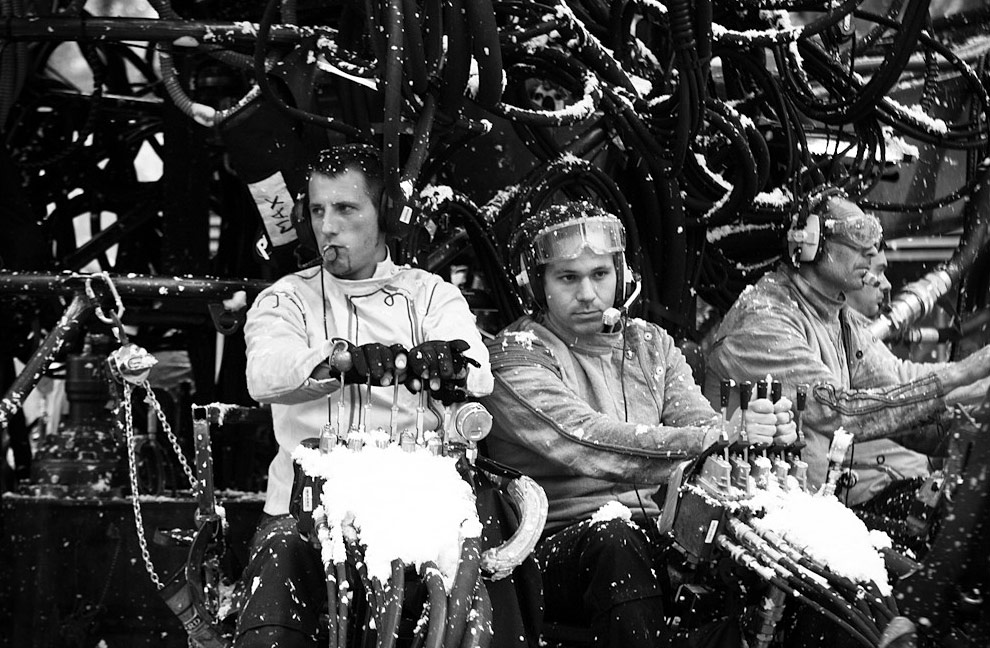 12
A close up of the operators of La Princesse. There are 13 in total riding on the spider, controlling her. Its an incredibly complex operation, with 50 hydraulic axes of movement, but looks so natural and easy to the outside observer. (© Peter Carr) # 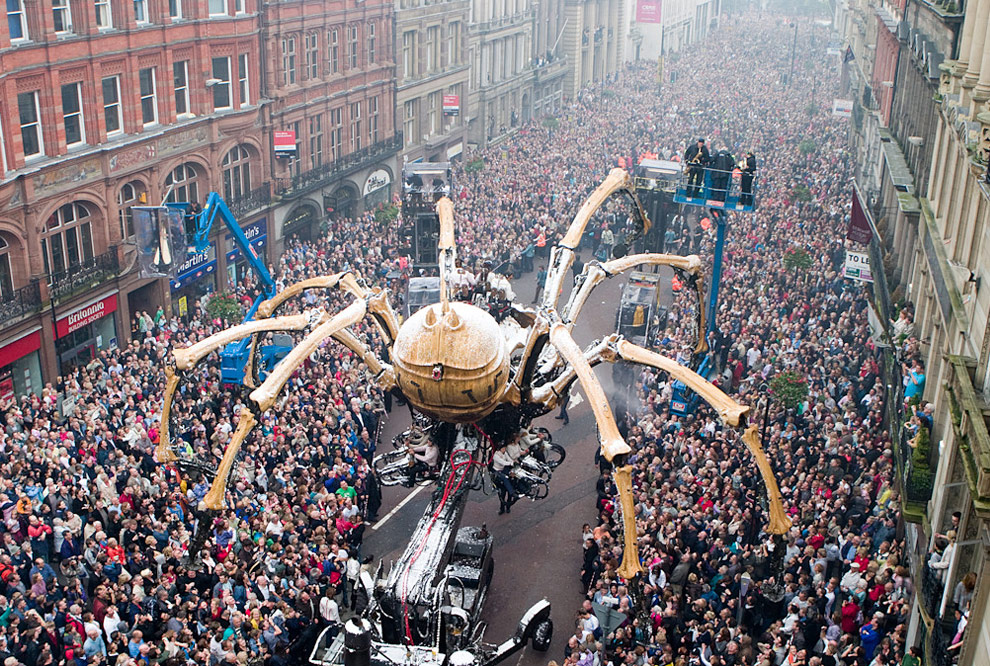 13
Over 50,000 people came to see La Machine on Saturday. More people lined Castle Street for this event than when the Beatles returned to Liverpool. (© Peter Carr) # 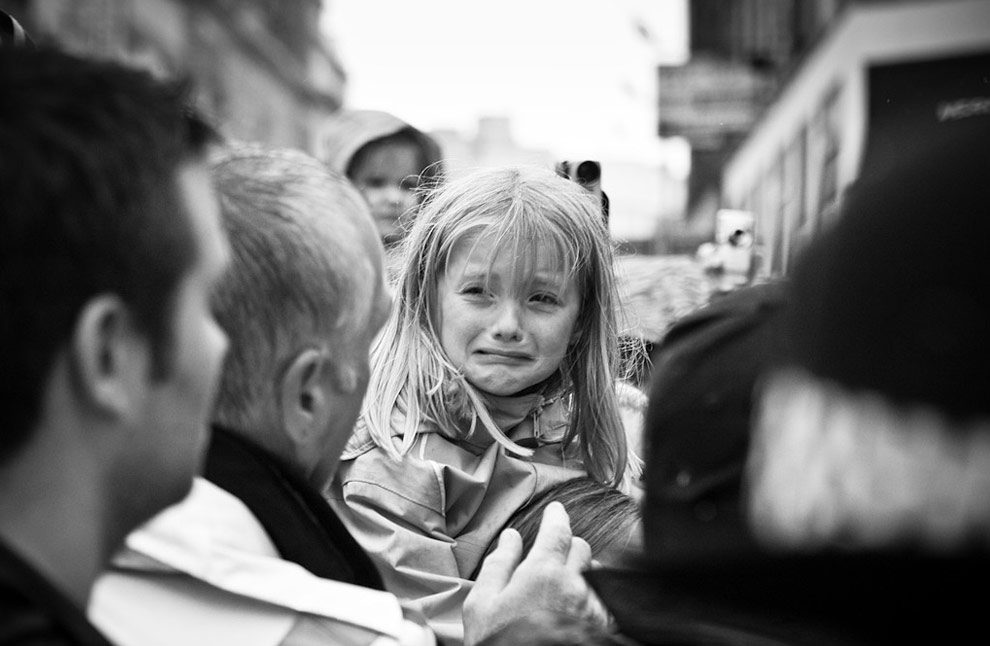 14
Not everyone enjoyed the show. A 50 ft spider walking around town is bound to make some people feel scared. I'm not a fan of spiders myself but seeing this was something else. (© Peter Carr) # 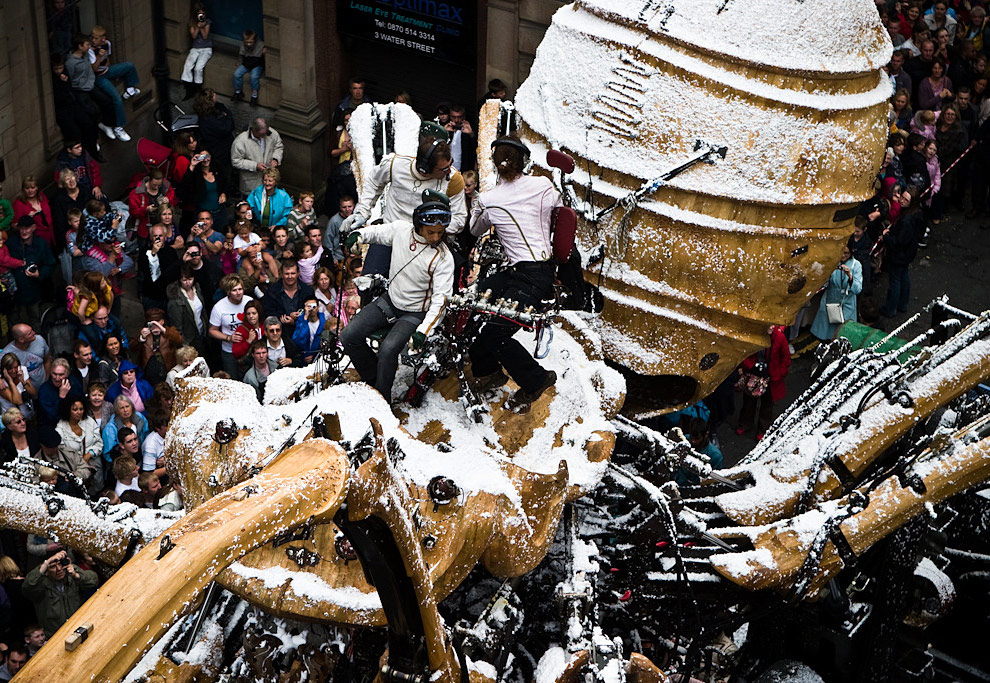 15
A close up view of La Princesse reveals the operators and the mechanics involved with the spider. (© Peter Carr) # 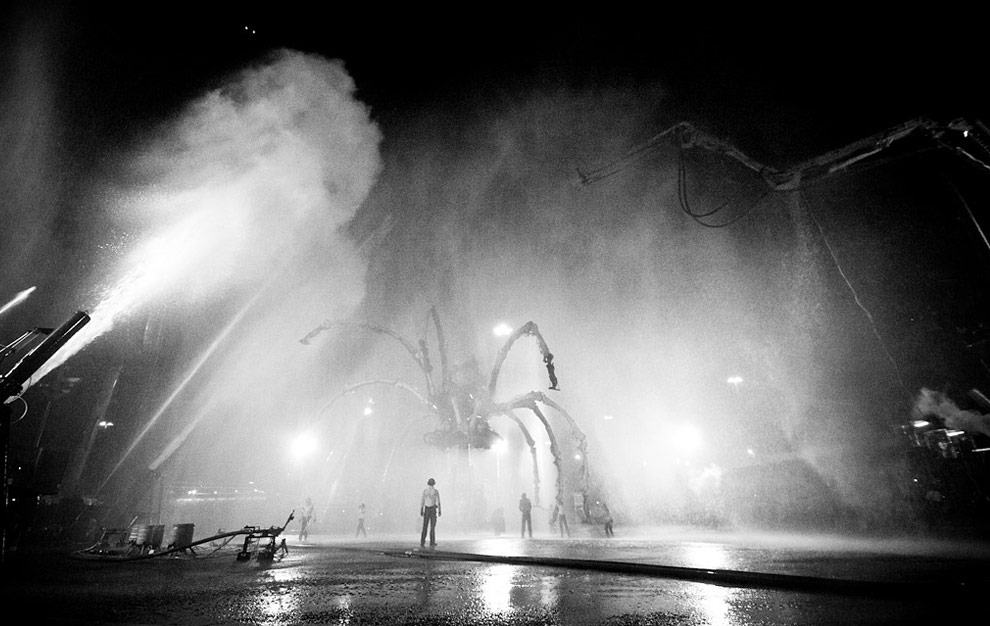 16
*FOOM* Jets of water blasting from all over the place. It was at this point that I dived under my coat to protect my gear. There's rain and then there's this, which is sheer insanity. Loved it! A completely incredible few days and something I'll probably never ever see happen around Liverpool again. Street theatre on a city scale with a 50ft spider. Amazing. (© Peter Carr) # 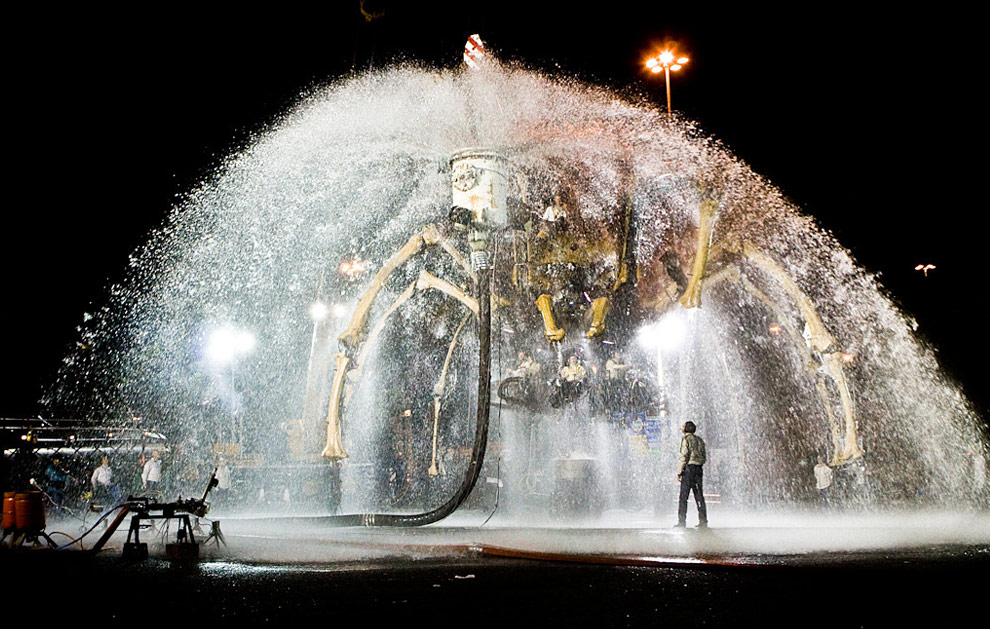 17
The end struggle. Scientists vs. La Princesse. Huge special effects are used like something from a film but its right there in front of you. (© Peter Carr) # 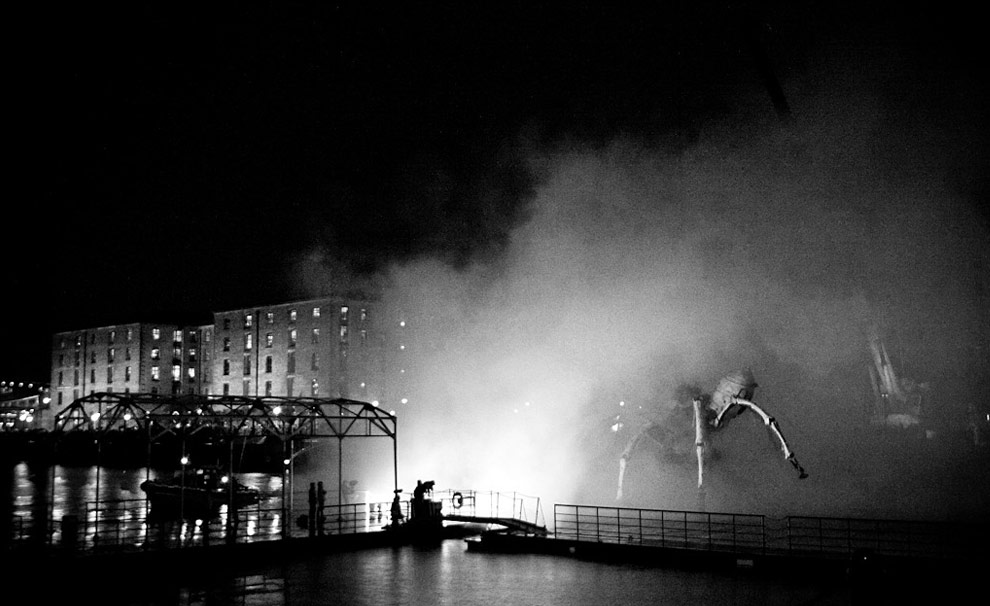 18
La Princesse is lifted into Salthouse Dock for a bath. Huge jets of water are fired into the air to clean her off before she heads off to sleep outside Liverpool's iconic 3 Graces. (© Peter Carr) # 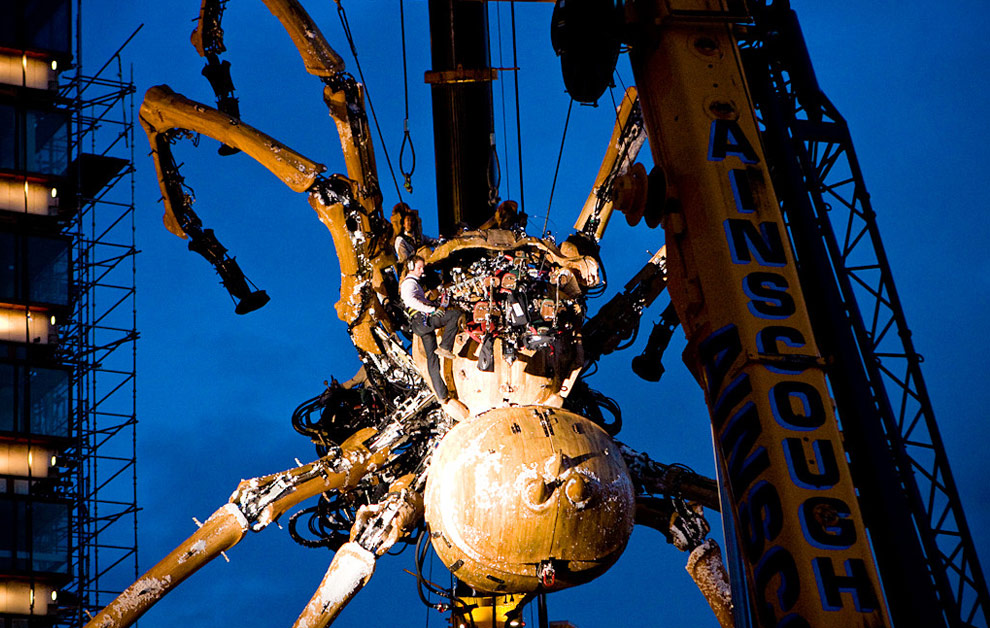 19
The final day and La Princesse is lifted off Concourse House. It's a complicated operatation to remove the spider, involving a couple of cranes and the time to reconnect the spider to the engine driving it around town. (© Peter Carr) # 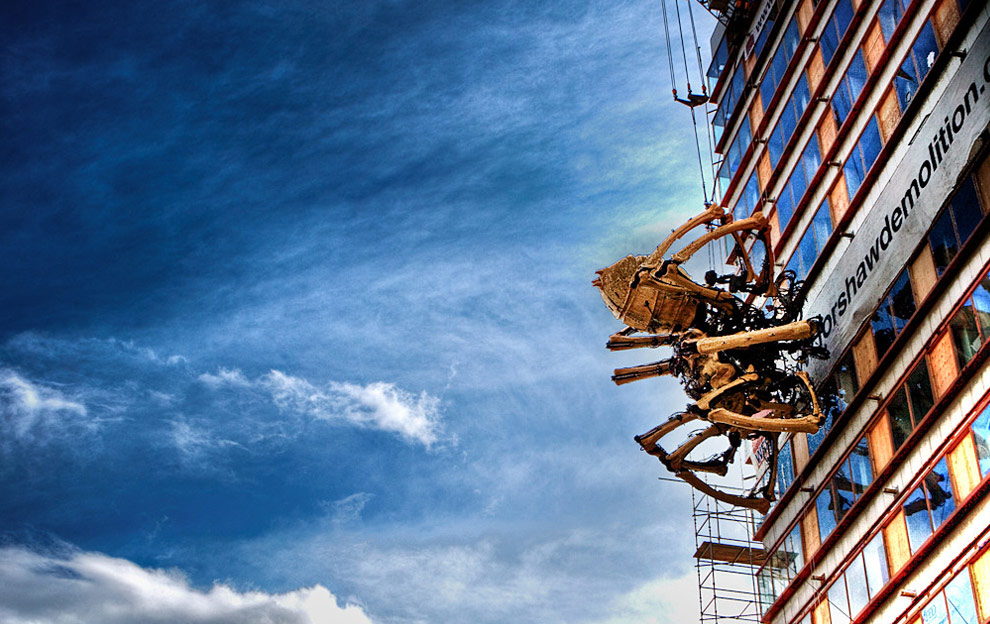 20
On day one, for 5 minutes the clouds part and the spider named La Princesse is fully revealed in stunning detail. Passers by are a little surprised at how small it looks but the next few days show that La Princesse was mearly sleeping. (© Peter Carr) # 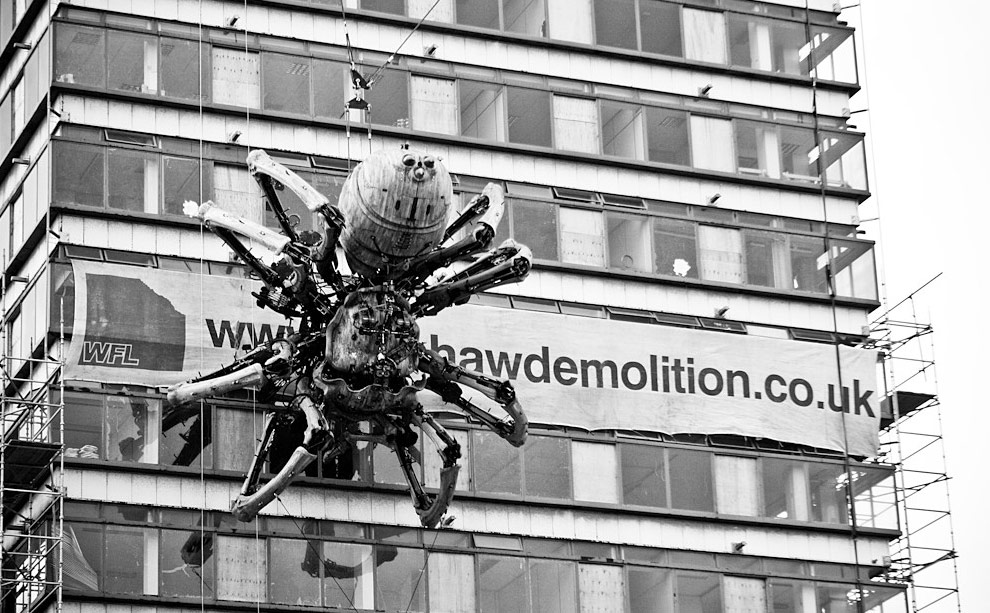 21
The Concourse House building is situated next to the main train station in Liverpool so everyone coming into work that day certainly got a surprise. (© Peter Carr) # 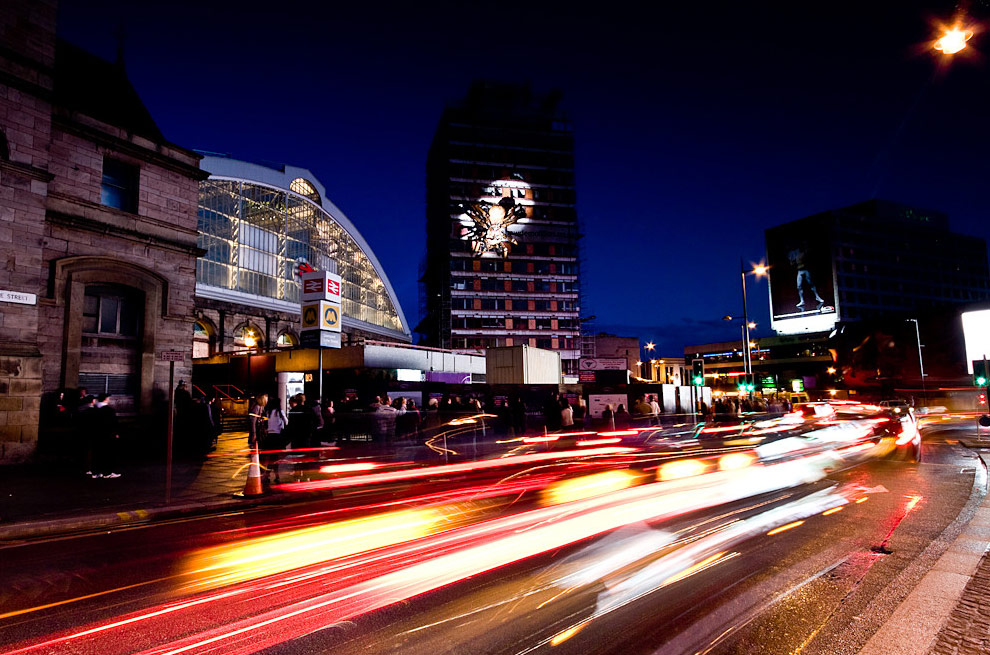 22
Night falls on the city and La Princesse is lit up by a search light. The road has a constant stream of traffic passing by as everyone wants a look. (© Peter Carr) # 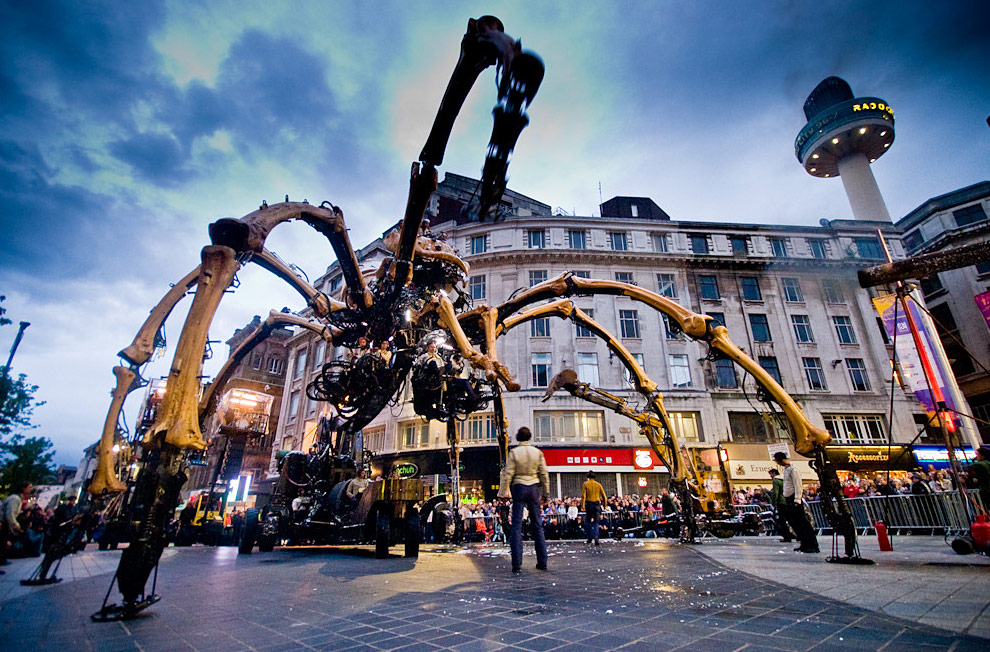 23
Liverpool city center. La Princesse picks a fight with a digger and then starts to fight with some of the scientists who have been following her around. One is nearly crushed. (© Peter Carr) #