The end of the Christmas Season

In places around the world where people observe Christmas, they do so with a wide variety of religious, secular and folk traditions. Most traditions are celebrations of the birth of Jesus Christ, (observed on December 25th in most places, on January 7th by some Eastern Orthodox churches), but many incorporate other customs and figures, such as Santa Claus, Father Frost, Saint Nicholas the Krampus and others. Last Tuesday, January 6th, was Epiphany, the day the Magi became the first religious figures to worship the infant Jesus Christ, and the conclusion of the Twelve Holy Days of the Christmas season. Here is a collection of people around the world observing traditions and ceremonies of the Christmas Season. (30 photos total) 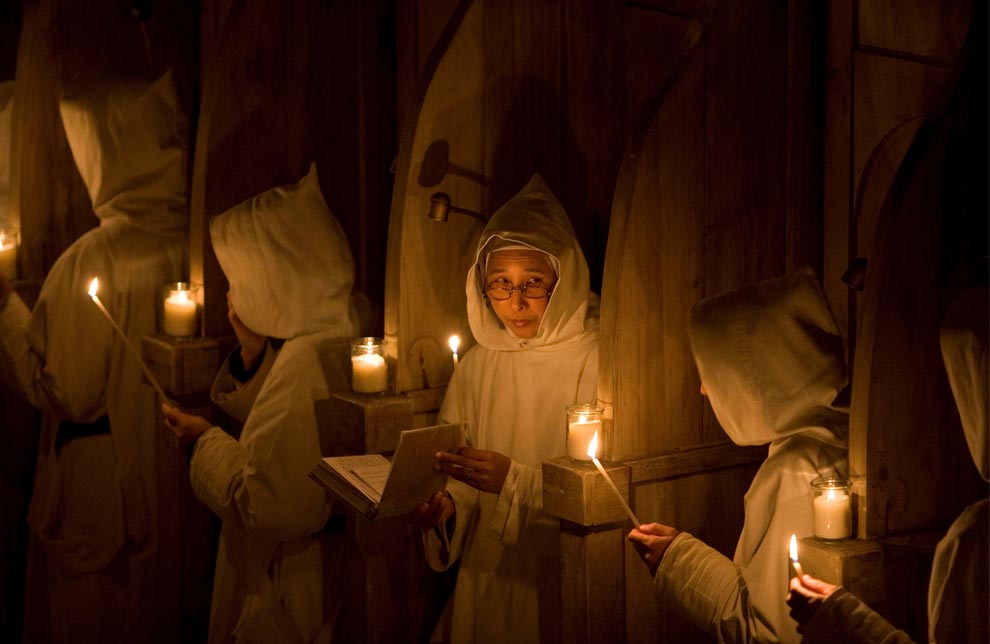 Catholic nuns of the Sisters of Bethlehem, some who have taken a vow of silence, pray during the Christmas mass in the Beit Jamal Monastery near Jerusalem, late Wednesday, Dec. 24, 2008. (AP Photo/Tara Todras-Whitehill) 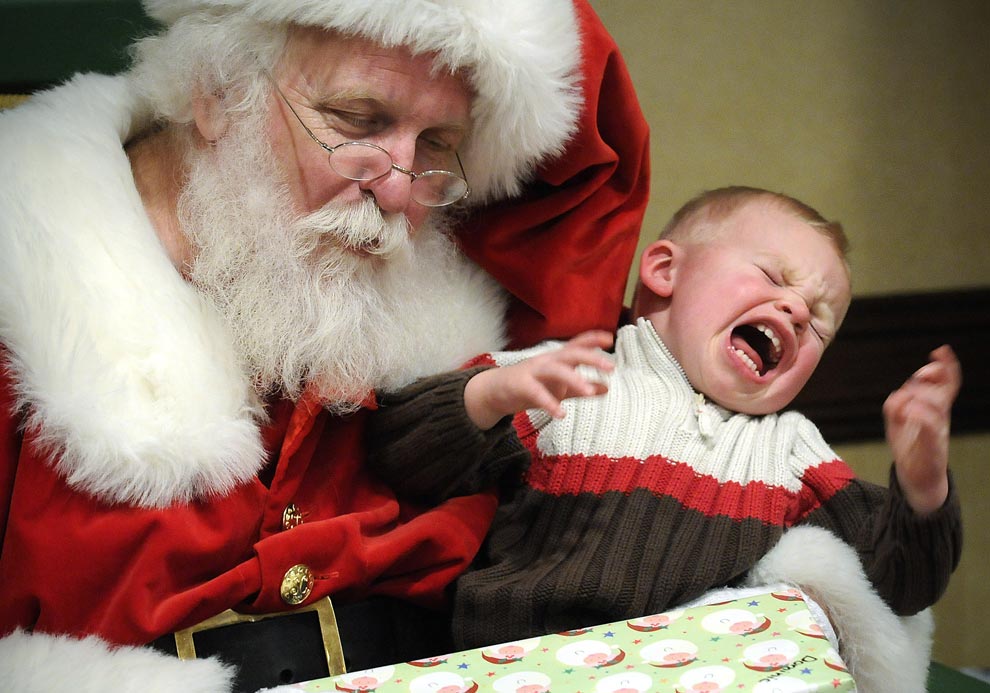 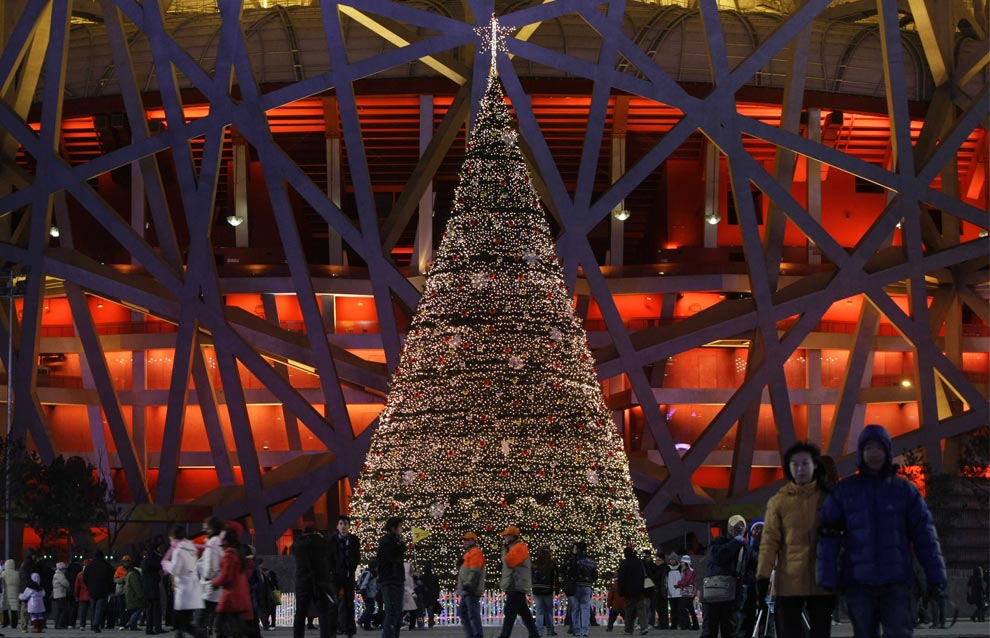 3
People walk near a Christmas tree outside the Bird's Nest, also known as the National Stadium, on Christmas Eve in Beijing, China on December 24, 2008. (REUTERS/Jason Lee) # 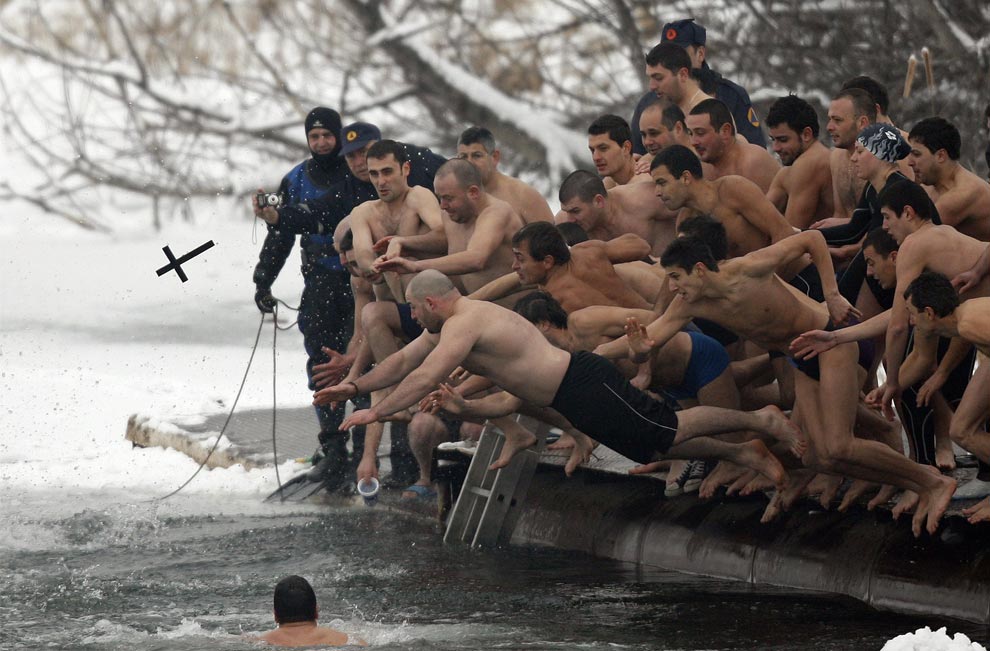 4
Men jump into the icy waters of a lake in an attempt to grab a wooden cross on Epiphany Day in Sofia, Bulgaria on January 6, 2009. (REUTERS/Stoyan Nenov) # 5
The sun rises above the Orthodox Church in the town of Novogrudok, 150 km west of the capital Minsk, Belarus, Tuesday, Jan. 6, 2009, as morning temperatures dropped to around -15 degrees Celsius. (AP Photo/Sergei Grits) # 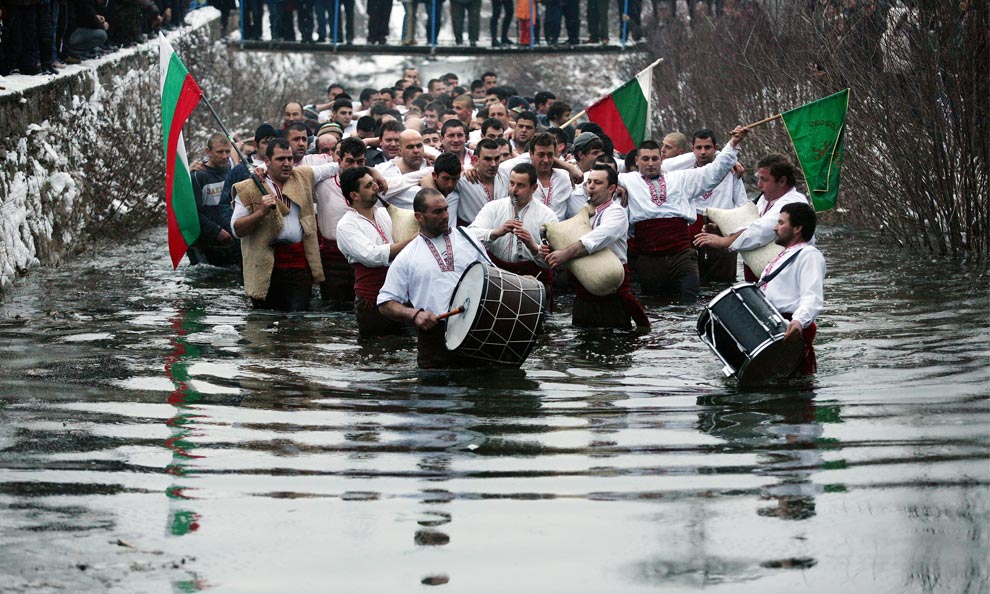 6
Men perform the traditional Bulgarian "Horo" dance in the icy winter waters of the river Tundzha in the town of Kalofer, Bulgaria some 200 km east of the capital Sofia, during the Epiphany Day celebrations on January 6, 2009. (BORYANA KATSAROVA/AFP/Getty Images) # 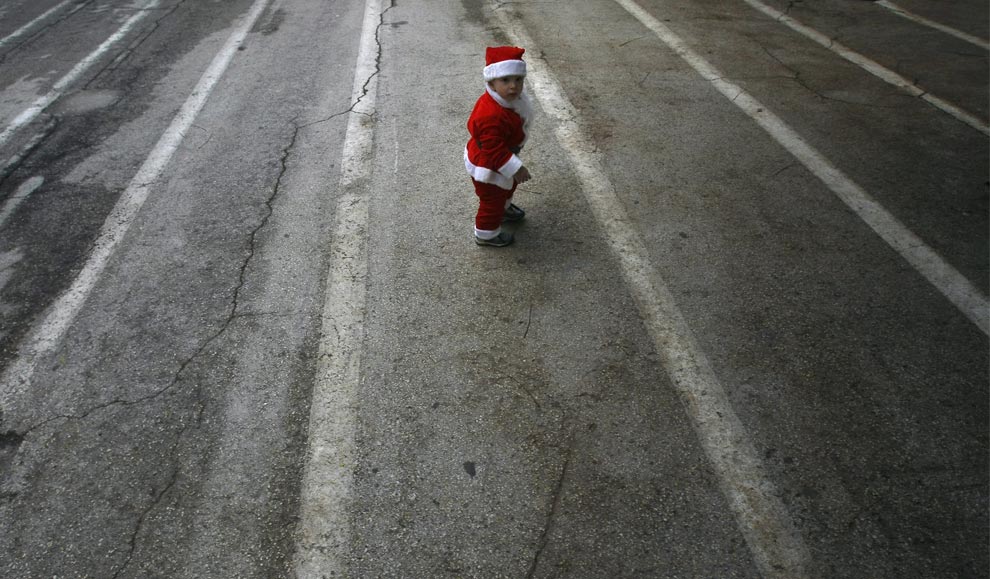 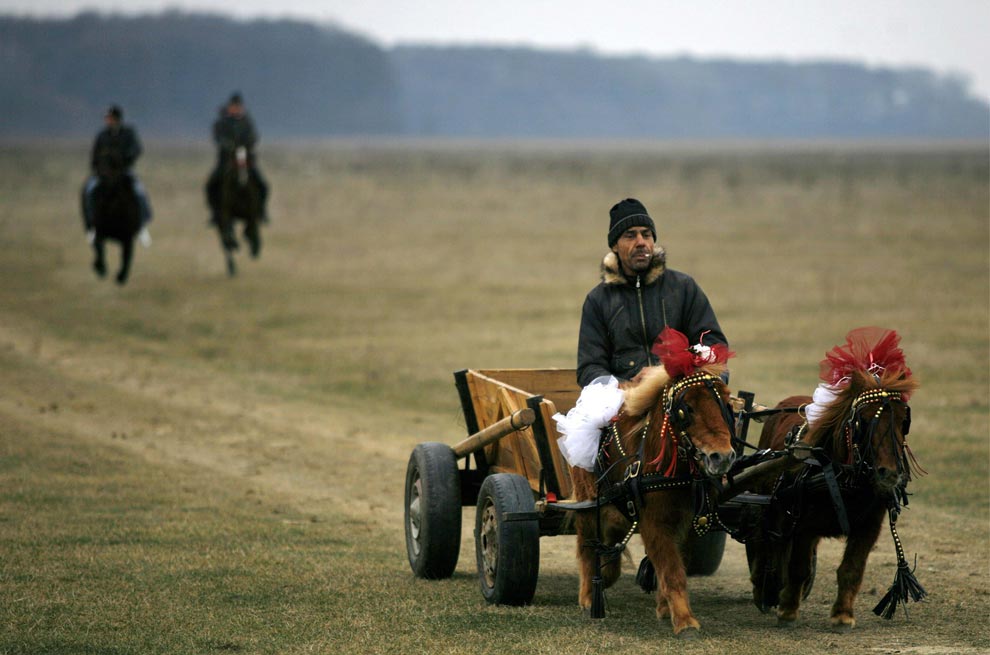 8
A man rides in his cart, pulled by ponies, before the annual horse race organized by Orthodox believers in the Romanian village of Pietrosani, 45km north of Bucharest, Romania on Epiphany Day January 6, 2009. (REUTERS/Mihai Barbu) # 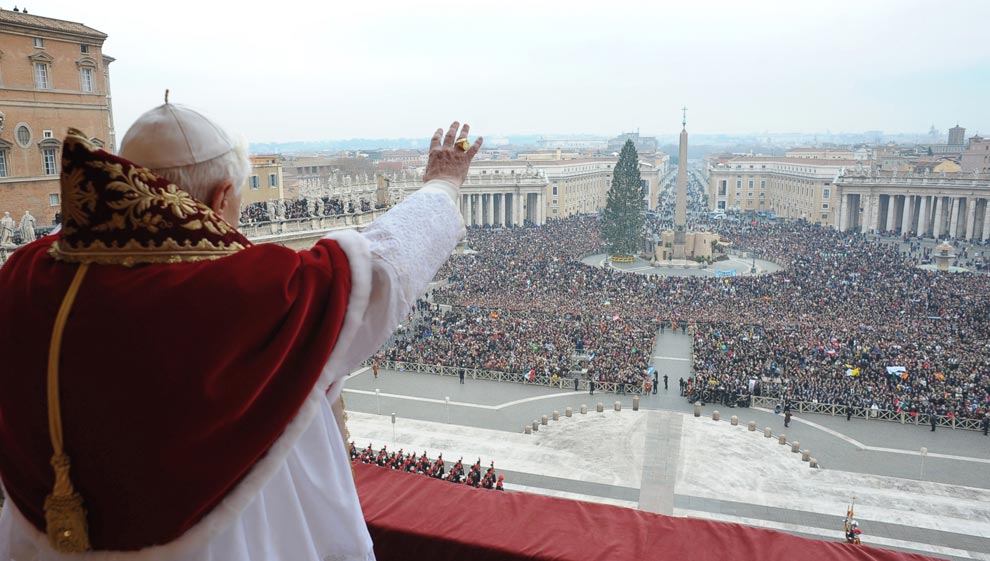 9
Pope Benedict XVI blesses the crowd from the central balcony of St. Peter's Basilica as he adresses the "Urbi et Orbi" message to the City and to the World at the Vatican on December 25, 2008. The Pontiff in his Christmas message warned that the world was headed toward ruin if selfishness prevails over solidarity during tough economic times for both rich and poor nations. Speaking from the central balcony of St. Peter's Basilica on the day Christians commemorate Jesus' birth in Bethlehem, Benedict XVI declared that the "heart of the Christian message is meant for all men and women". (OSSERVATORE ROMANO/AFP/Getty Images) # 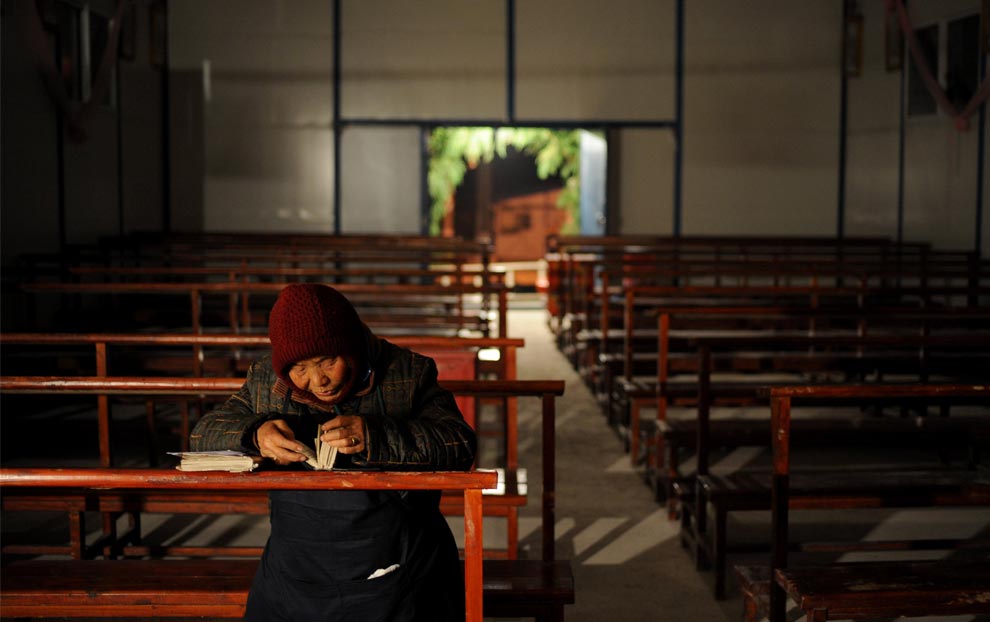 10
A catholic woman reads the Bible after a Christmas Eve mass at the temporary Bailu Township Church on December 24, 2008 in Pengzhou of Sichuan Province, China. The church, destroyed in the May 12 Sichuan earthquake, was rebuilt in a makeshift house. Many pilgrims have come to worship at the church today with commemoration for the victims, over seven months after the devastating earthquake. (China Photos/Getty Images) # 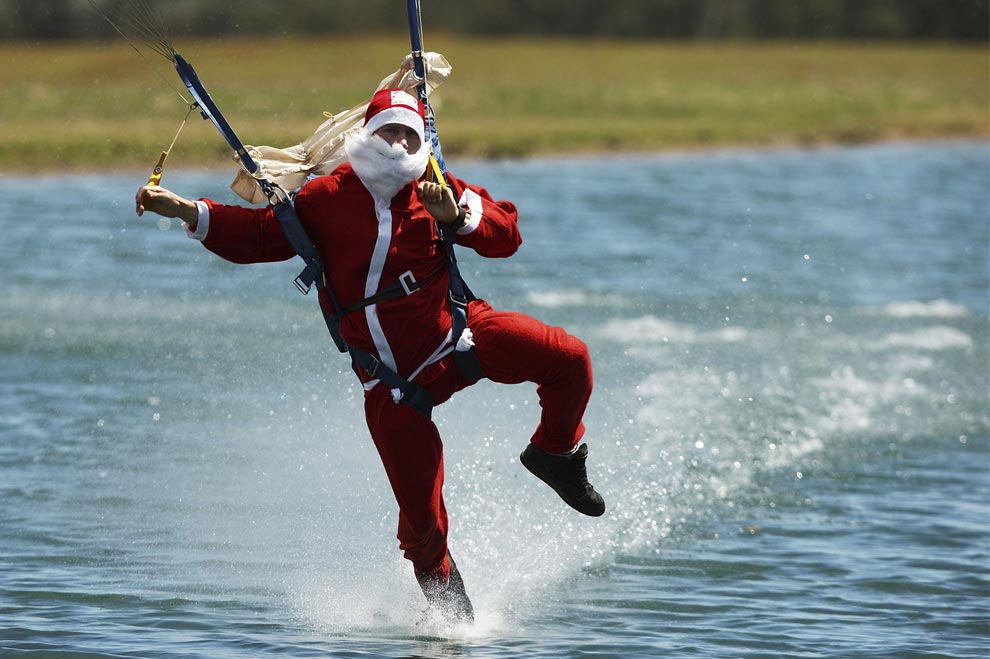 11
A Skydiver in a Santa Claus costume comes in for a wet landing in Sydney, Australia on December 17, 2008. (Brendon Thorne/Getty Images) # 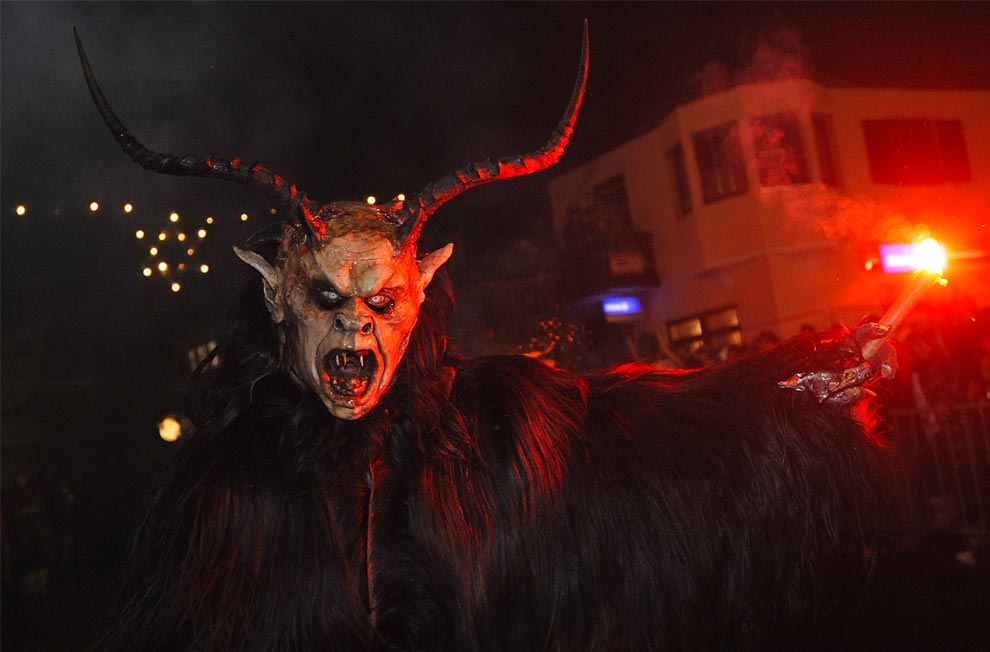 12
A man dressed as a Krampus, traditionally the companion of St. Nicholas who might dole out punishment to bad children. One of Austria's unique Advent traditions, this man is seen as a part of a Krampus procession in the city of Unken, Austria on Friday, Dec. 5, 2008. (AP Photo/Kerstin Joensson) # 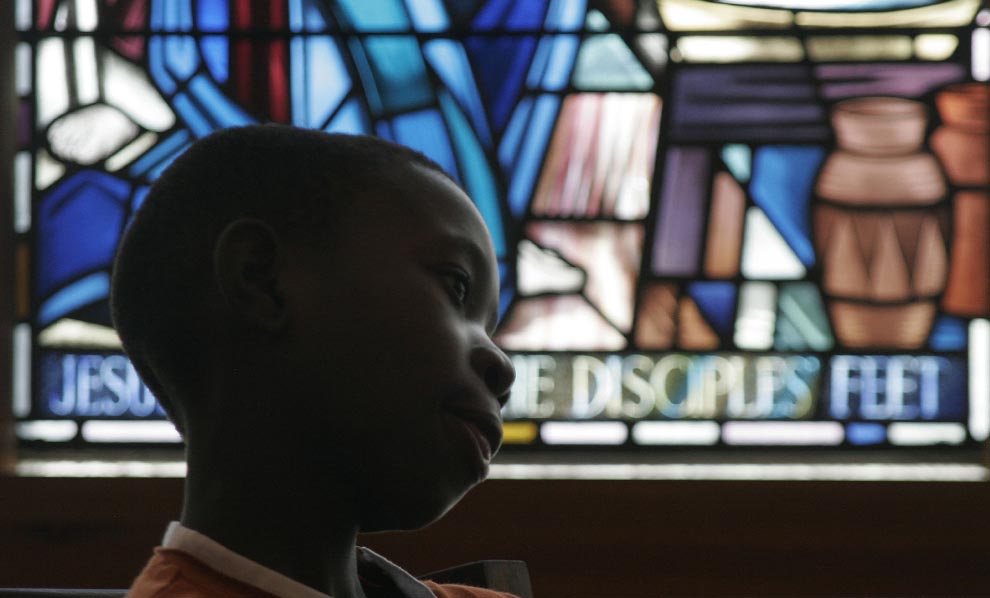 13
A child attends a Christmas carol mass at the Central Methodist Church in Johannesburg, South Africa on Sunday, Dec. 21, 2008. The church has become a camp for Zimbabweans fleeing their nation's economic and political crisis as the situation worsens in the neighboring state. (AP Photo/Denis Farrell) # 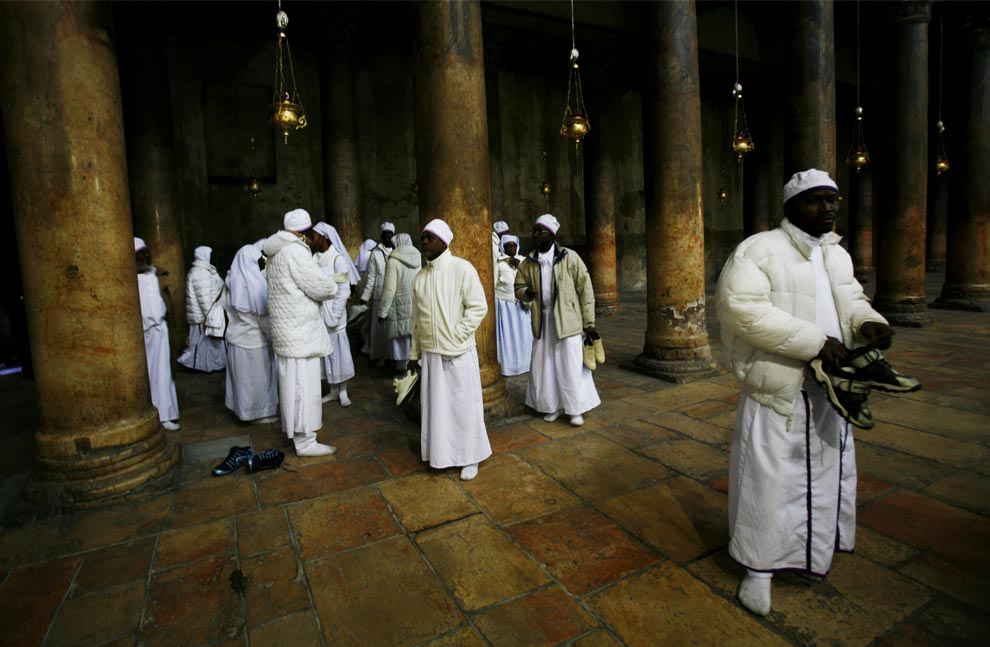 14
Christian pilgrims from Nigeria are seen inside the Church of Nativity, believed by many to be the birthplace of Jesus Christ, in the West Bank town of Bethlehem, Wednesday, Dec. 24, 2008. Tourists from all over the world flocked to Jesus' traditional birthplace to celebrate Christmas Eve. (AP Photo/Muhammed Muheisen) # 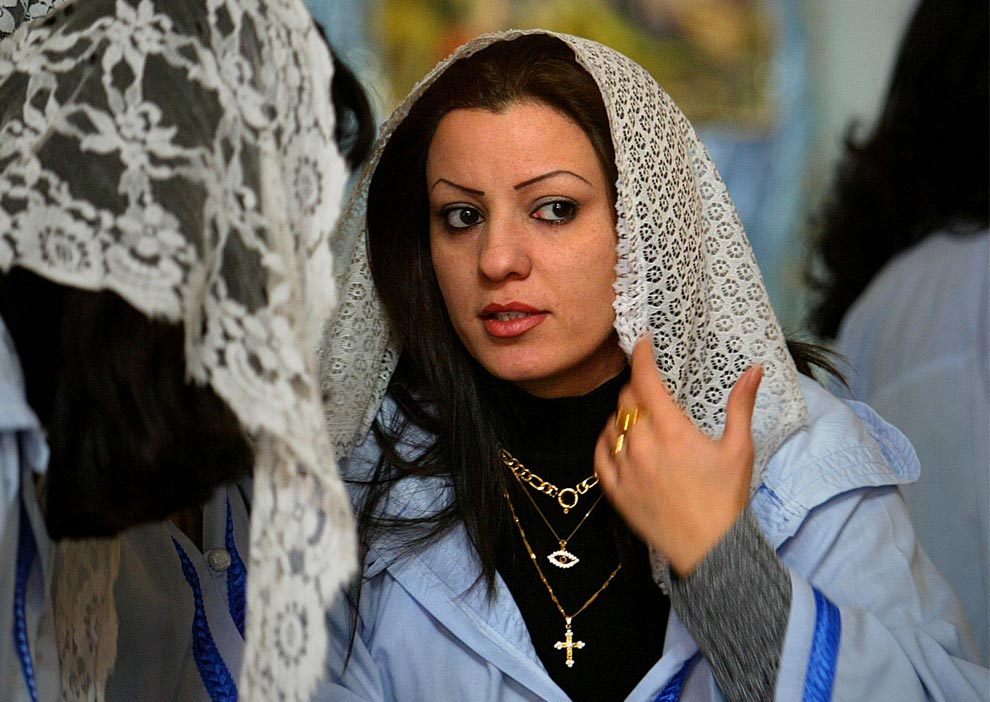 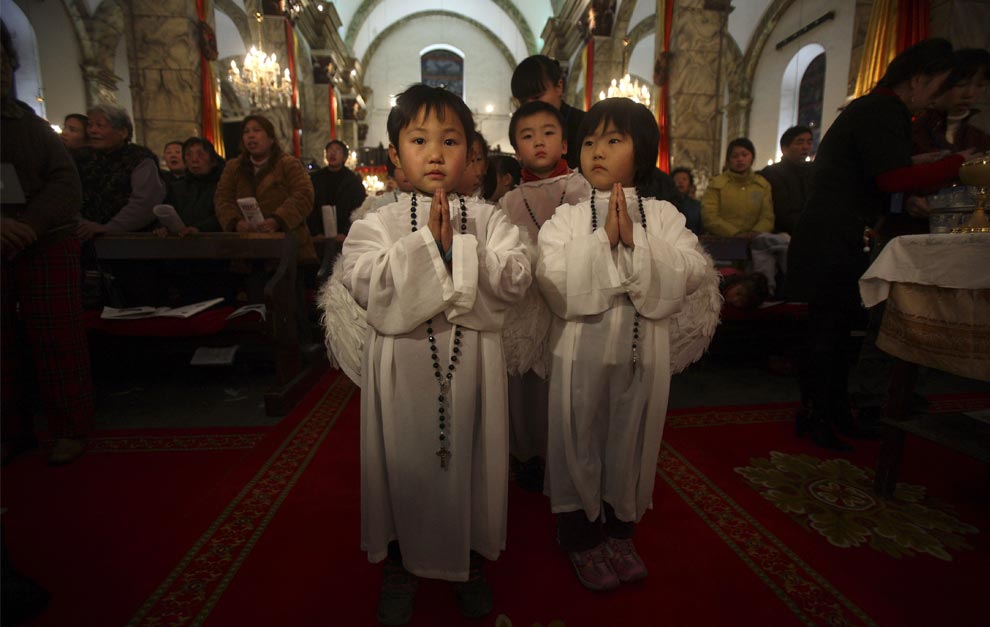 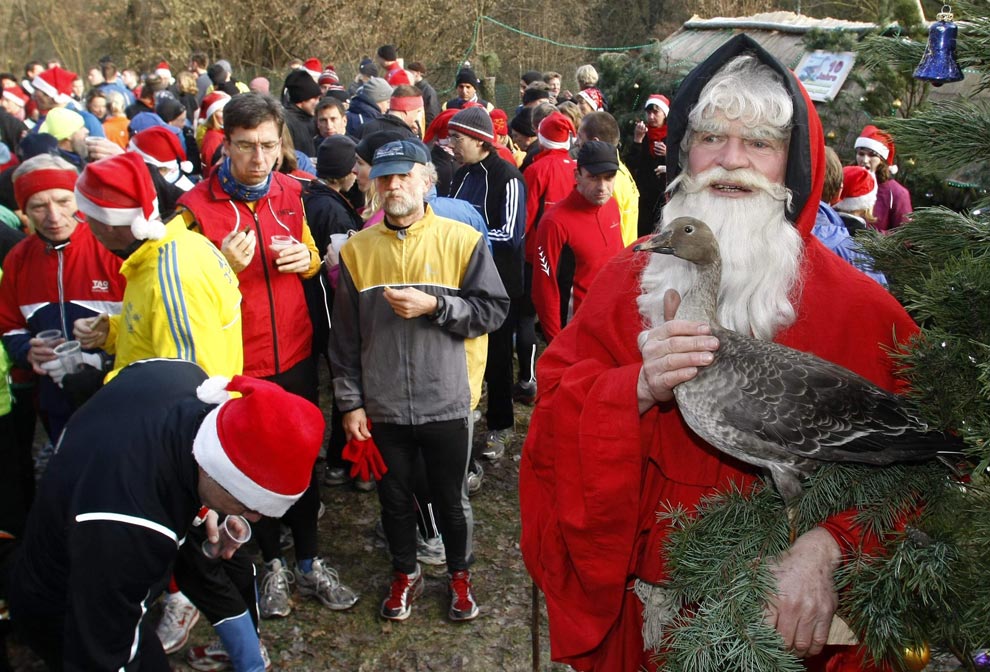 17
A man dressed as Santa Claus holds a mock goose as runners take a break after the "Gaensebratenvernichtungslauf", or roast goose fat reduction run, at Berlin's Grunewald forest in Germany on December 26, 2008. Several hundred people took part in the annual run during the Christmas holidays. (REUTERS/Fabrizio Bensch) # 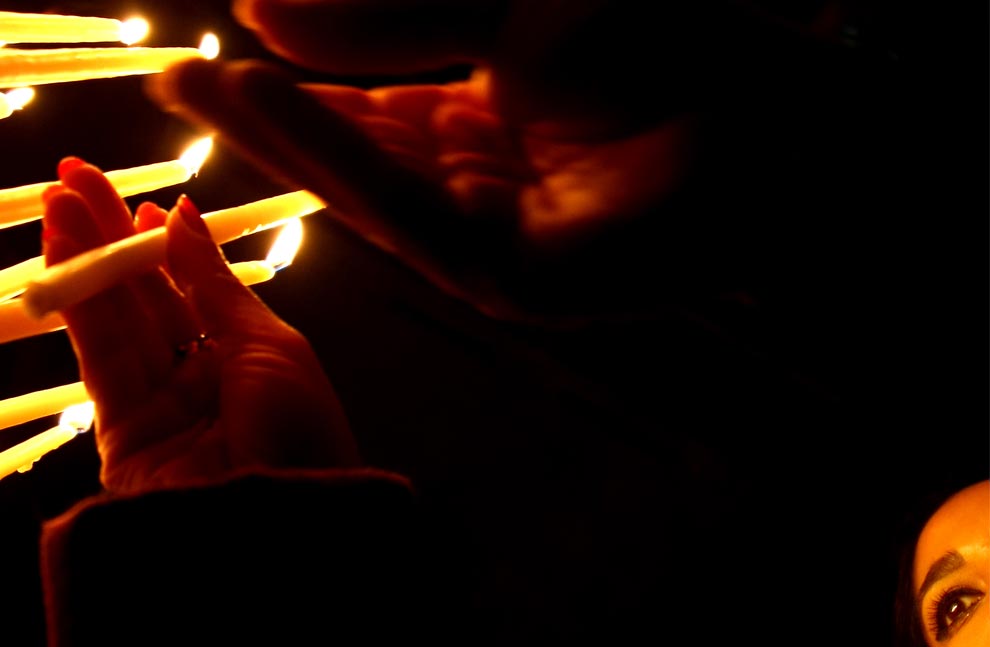 18
A Catholic woman lights a candle at the St. Esprit Church during the Christmas mass at midnight, in Harbiye, downtown Istanbul, Turkey on December 24, 2008. (MUSTAFA OZER/AFP/Getty Images) # 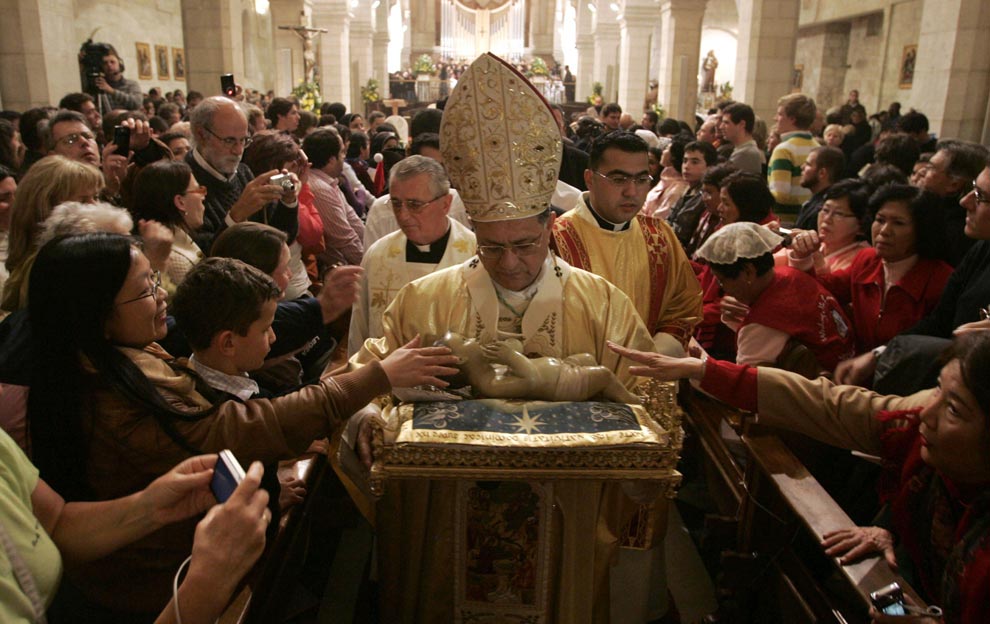 19
Latin Patriarch of Jerusalem Fuad Twal (center) carries a statue of baby Jesus following the Christmas midnight mass at the Church of the Nativity in the West Bank town of Bethlehem early December 25, 2008. (REUTERS/Musa Al-Shaer/Pool) # 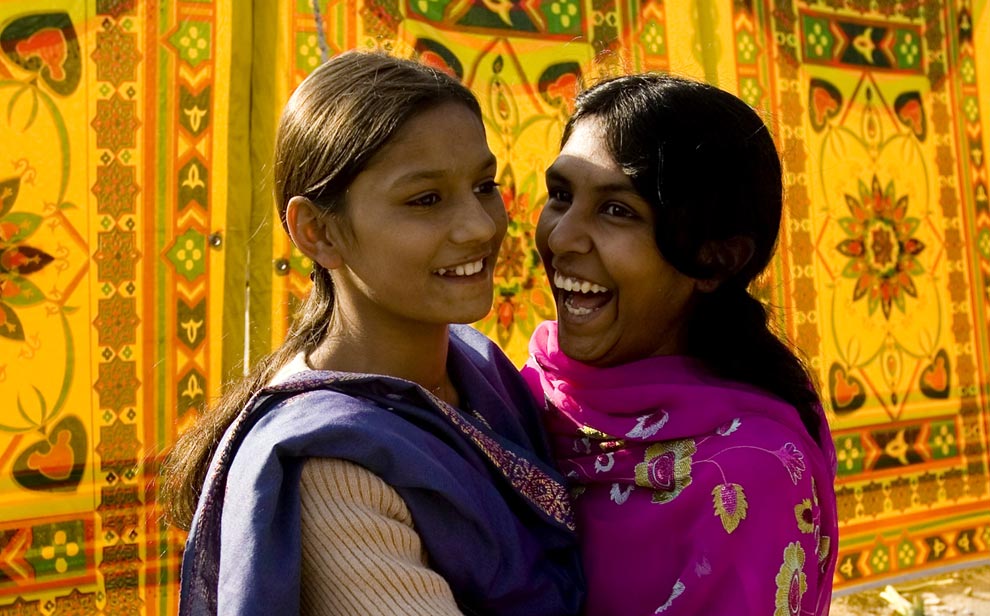 21
Pope Benedict XVI prays at the nativity scene in St Peter's Square, shortly after presiding over Vespers and Te Deum prayer in St Peter's Basilica at the Vatican, on December 31, 2008. (FILIPPO MONTEFORTE/AFP/Getty Images) # 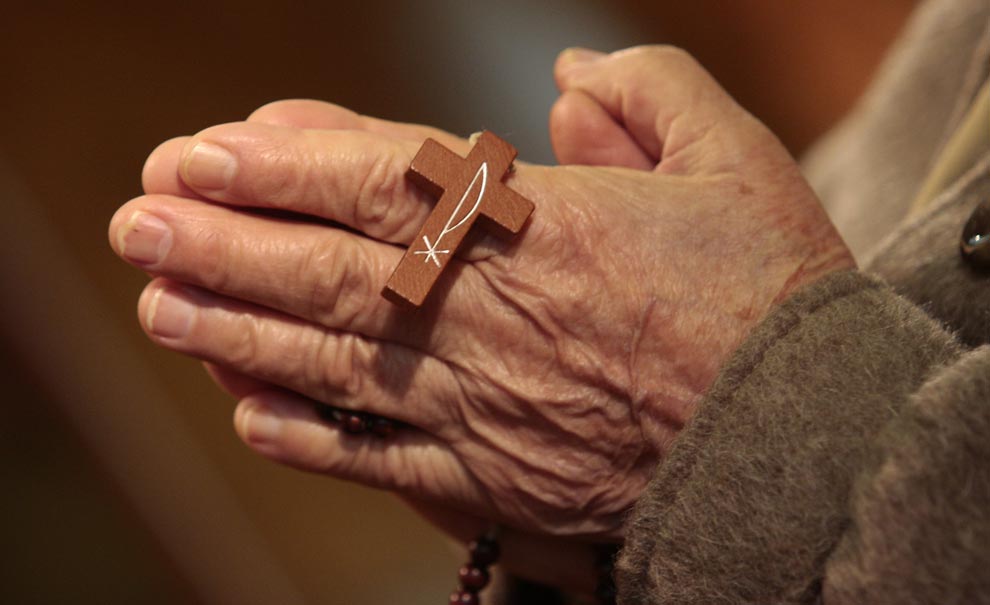 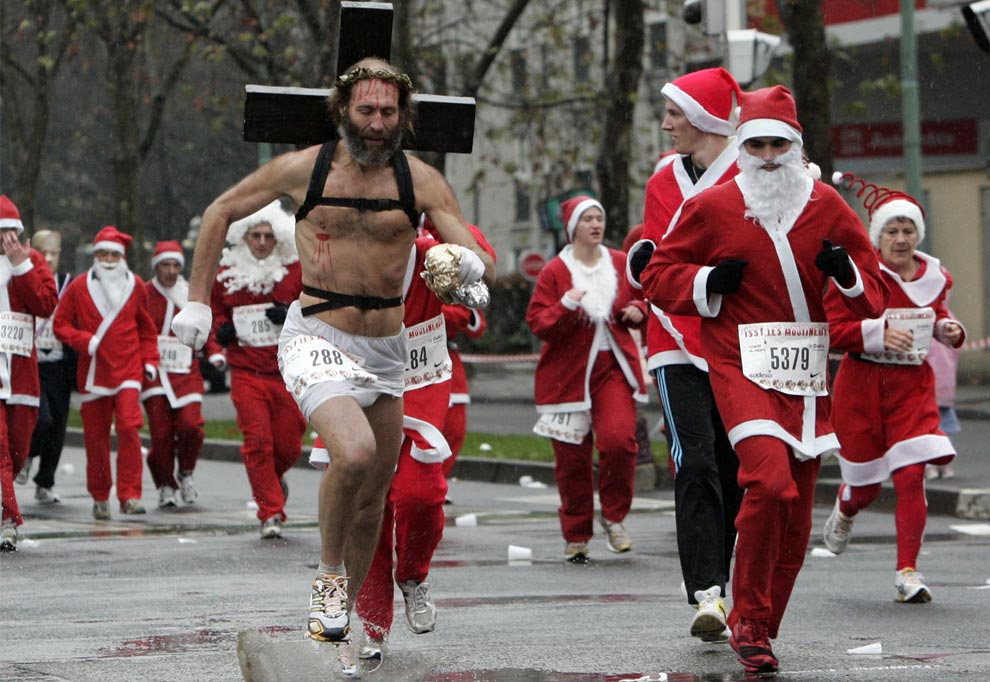 23
Runners, dressed as Santa Claus, one of them carrying a cross on his shoulders to resemble Jesus Christ, take part of the "Christmas Corrida Race" in the streets of Issy Les Moulineaux, west outskirts of Paris, Sunday, Dec. 14, 2008. (AP Photo / Francois Mori) # 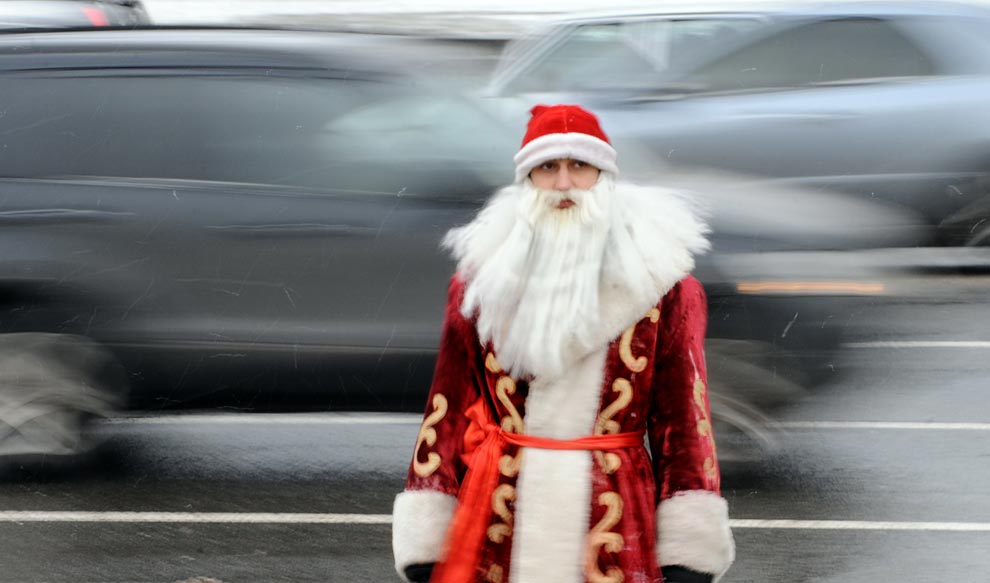 24
A man dressed as a Father Frost stands by the road in centre of Kiev, Ukraine on December 26, 2008. (SERGEI SUPINSKY/AFP/Getty Images) # 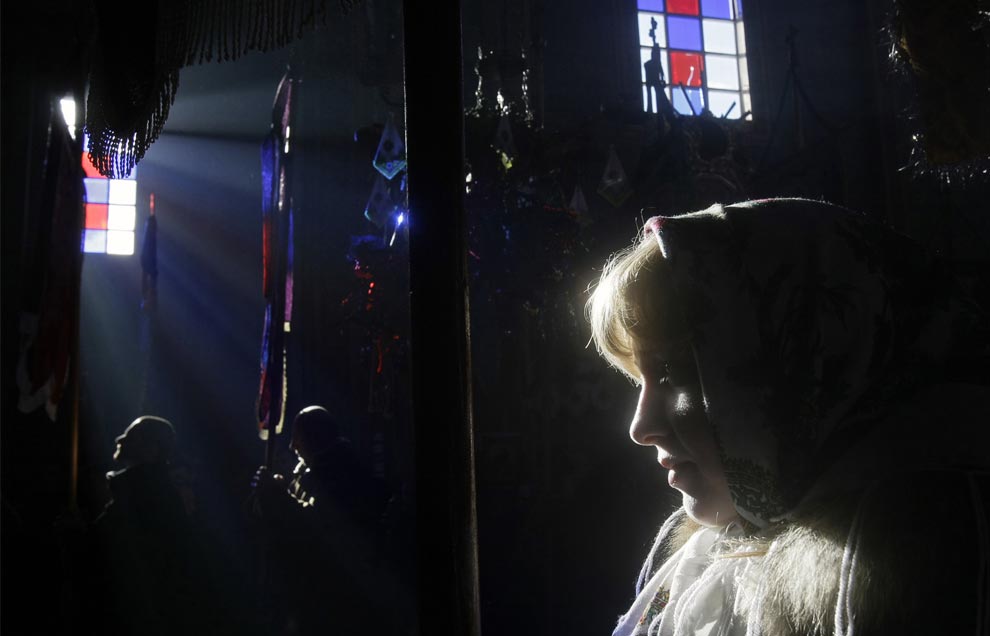 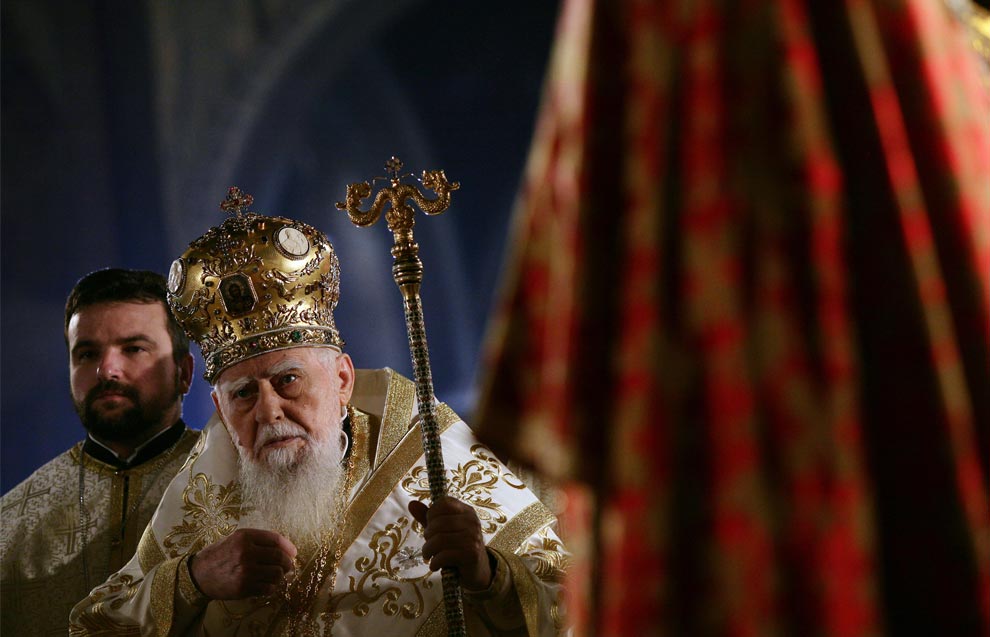 26
A Bulgarian Patriarch Maxim makes the sign of the cross as he attends Christmas mass in the golden-domed Alexander Nevsky cathedral, in central Sofia on December 25, 2008. Bulgaria unlike some other fellow Orthodox countries, celebrates Christmas on December 25. (BORYANA KATSAROVA/AFP/Getty Images) # 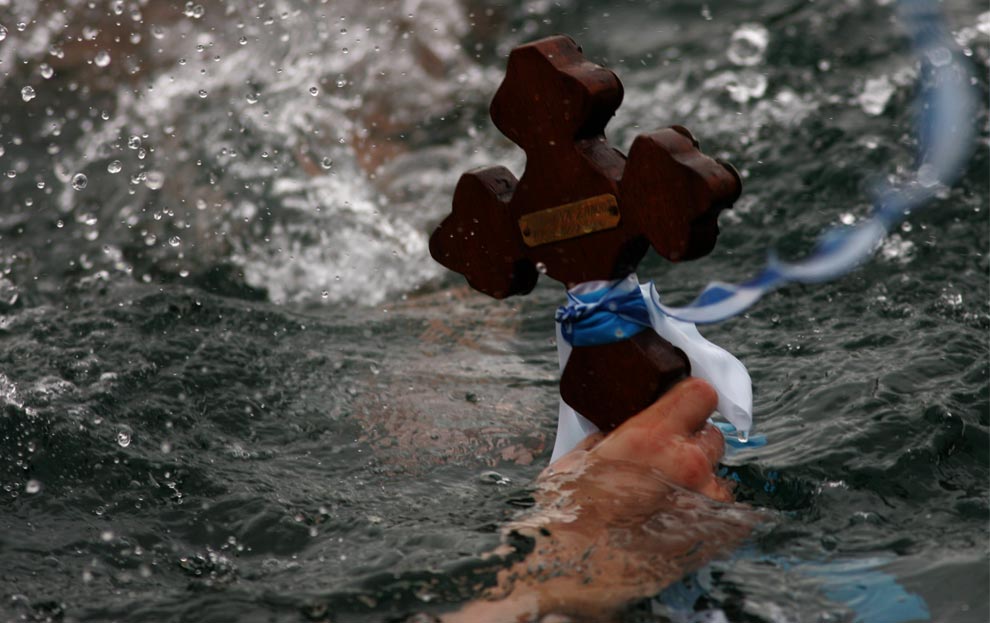 27
Swimmer, Joshoua Samios holds the cross after retrieving it from the water, during a traditional ceremony to bless the water in Greece's Perama port near Athens, on Tuesday. Jan. 6, 2009. Similar ceremonies to mark Epiphany day were held across Greece on river banks, seafronts and lakes, where an Orthodox priest throws a cross into the water and swimmers race to be the first to retrieve it. (AP Photo/Petros Giannakouris) # 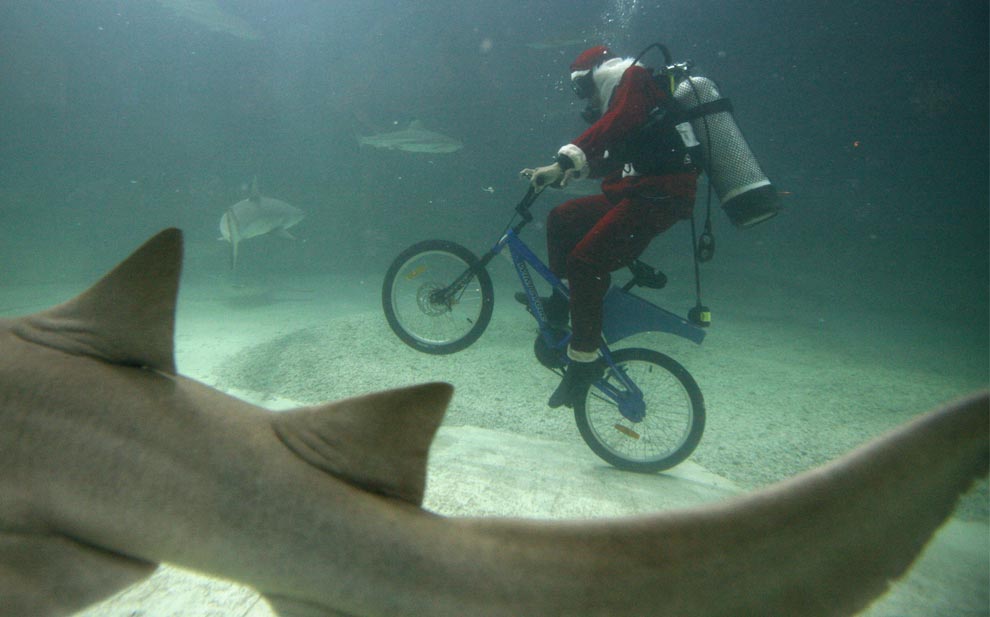 28
A diver in Santa Claus costume rides a bicycle inside a shark tank at the Sea World in Jakarta, Indonesia, Friday, Dec. 19,2008. (AP Photo/Achmad Ibrahim) # 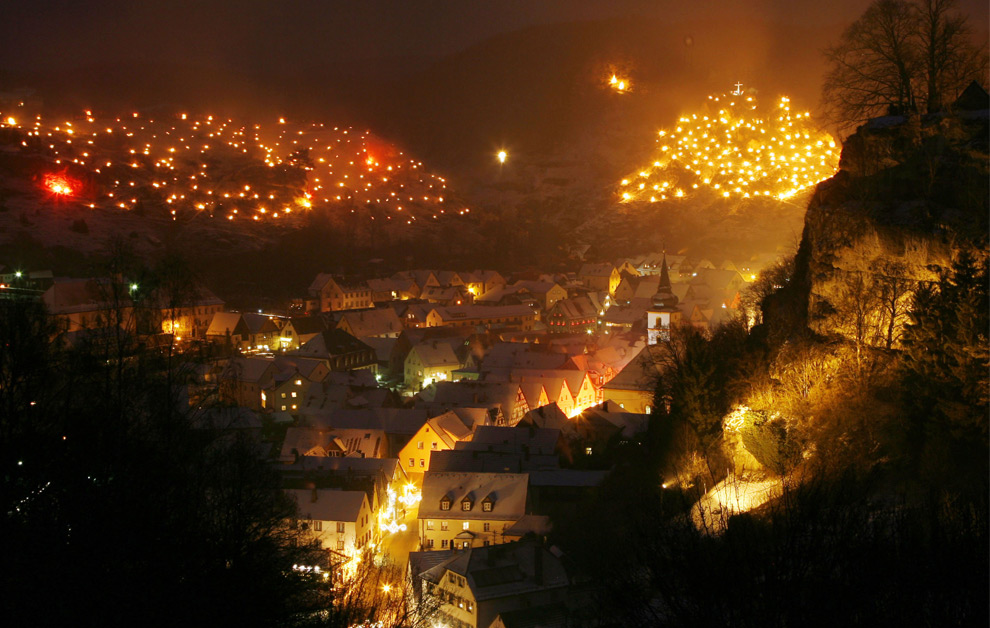 29
Around 1,000 bonfires are lit up on the hills surrounding the southern village of Pottenstein on January 6, 2009. The annual festivity is celebrated traditionally on Epiphany to commemorate the Eternal Adoration. (TIMM SCHAMBERGER/AFP/Getty Images) # 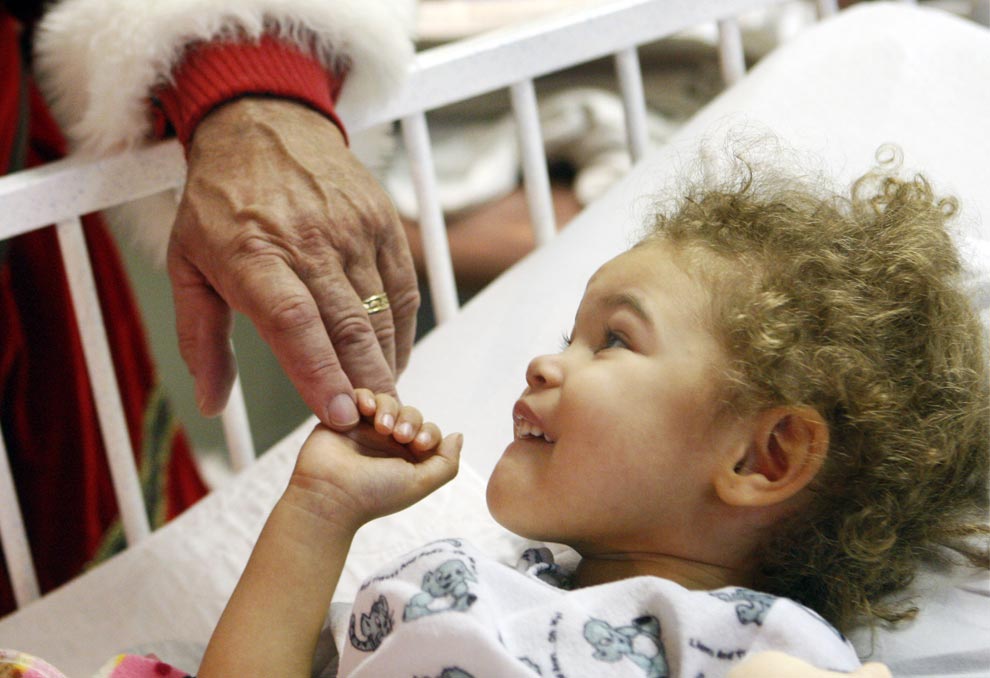