Lighting up the night

Berlin, Germany is hosting its "Festival of Lights" this week, until October 26th. Dozens of landmarks are lit up with lamps, projectors and lasers, accompanied by fireworks and other events. We humans light up the night for many reasons, practical, artistic - even reasons with more meaningful messages. Pictured below are night scenes from Berlin and around the world, illuminated in interesting ways. (21 photos total) 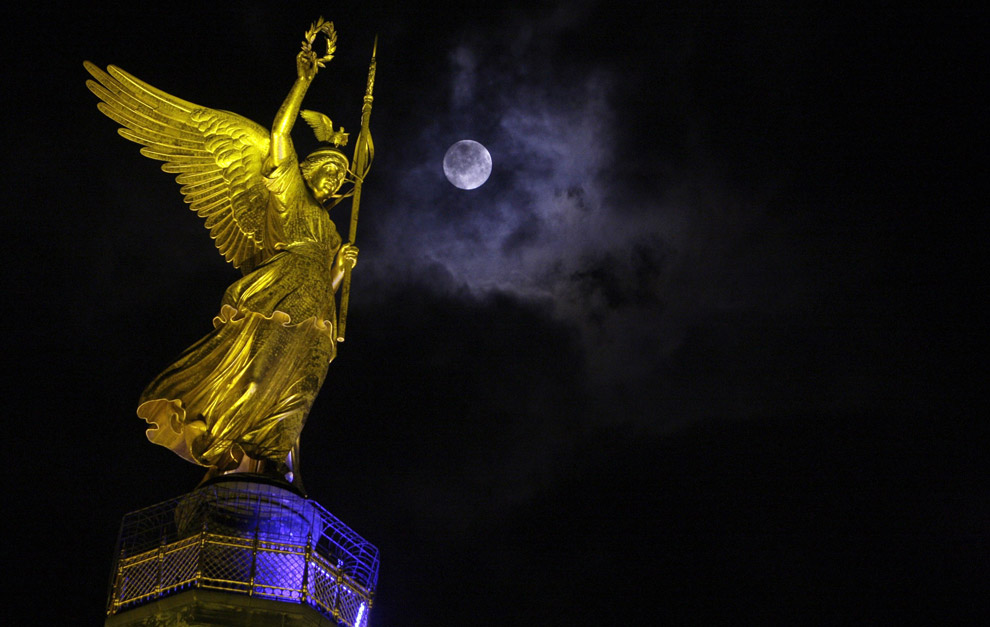 The "Siegessaeule" (Victory Column) is illuminated during a rehearsal for the upcoming "Festival of Lights" in Berlin, Germany on October 13, 2008. Several landmarks of the German capital, including boulevards, squares, towers, historical and modern buildings will be illuminated from October 14 to 26. (REUTERS/Tobias Schwarz) 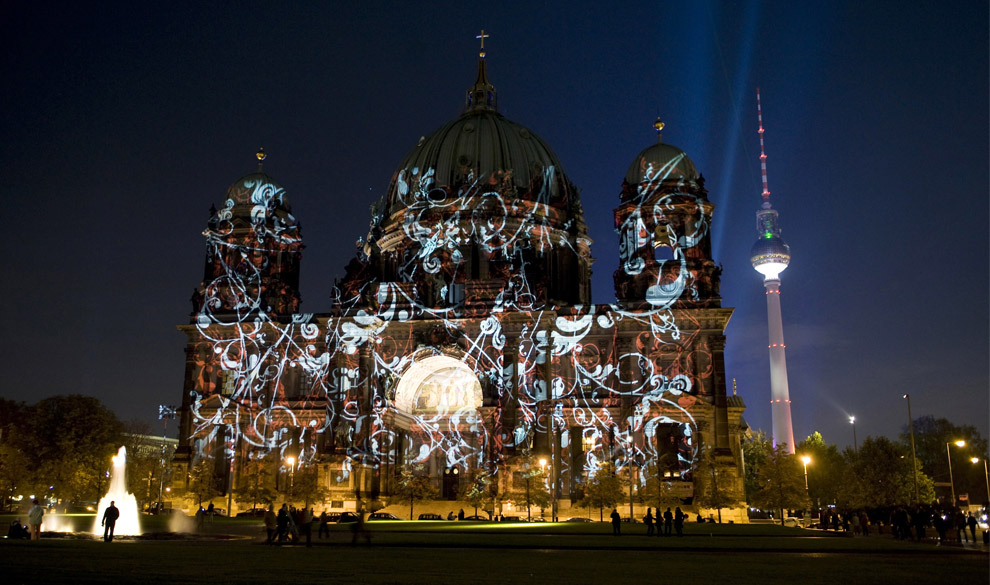 2
The landmark Berlin Cathedral is colorfully illuminated on the opening evening of the annual "Festival of Lights" on late October 14, 2008. (BARBARA SAX/AFP/Getty Images) # 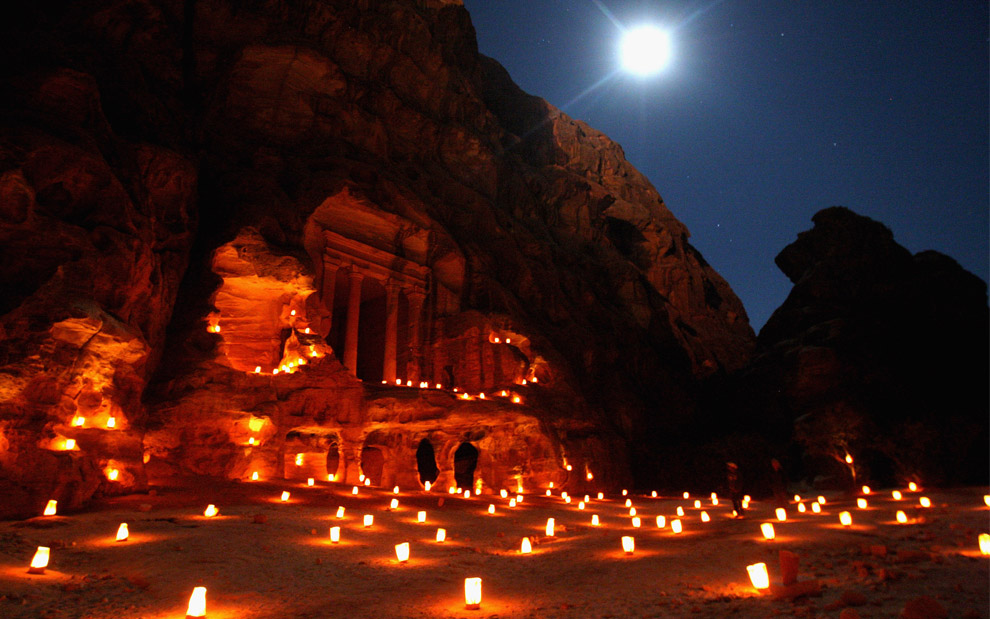 3
An ancient temple is lit up with candles at a Gala Dinner to celebrate the life of the opera singer Luciano Pavarotti as part of the Salute Petra event on October 11, 2008 in Petra, Jordan. Salute Petra is a three day event that takes place on the anniversary of Pavarotti's birthday, the 12th October. Due to hiss friendship with the Jordanian Royal Family, HRH Princess Haya of Jordan and the Government of Jordan have allowed the weekend to take place at the UNESCO World Heritage Site of Petra and will include a gala dinner and concert in the ancient city. (Chris Jackson/Getty Images) # 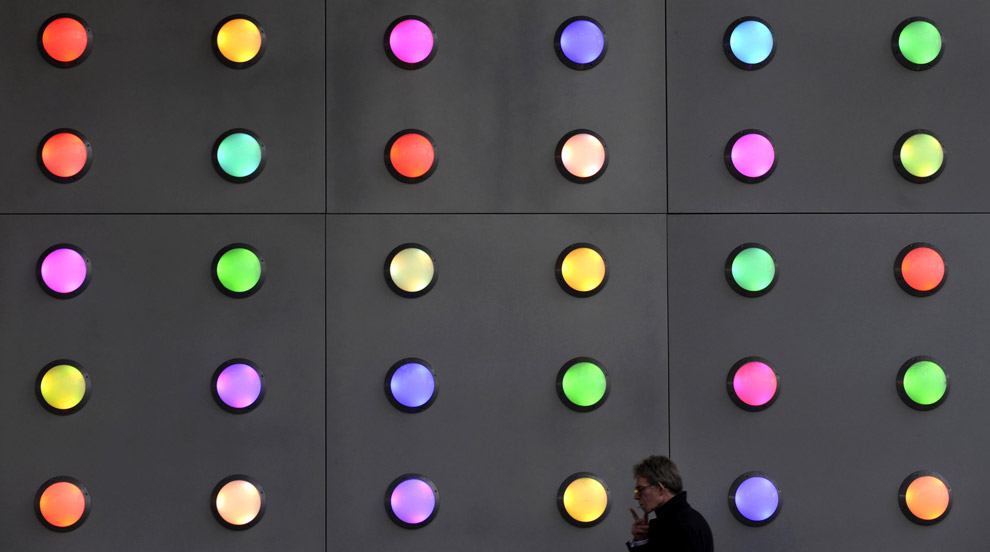 4
A worker passes by a lighting installation on a wall near London Bridge during the evening rush-hour in the City of London, England on October 9, 2008. (REUTERS/Toby Melville) # 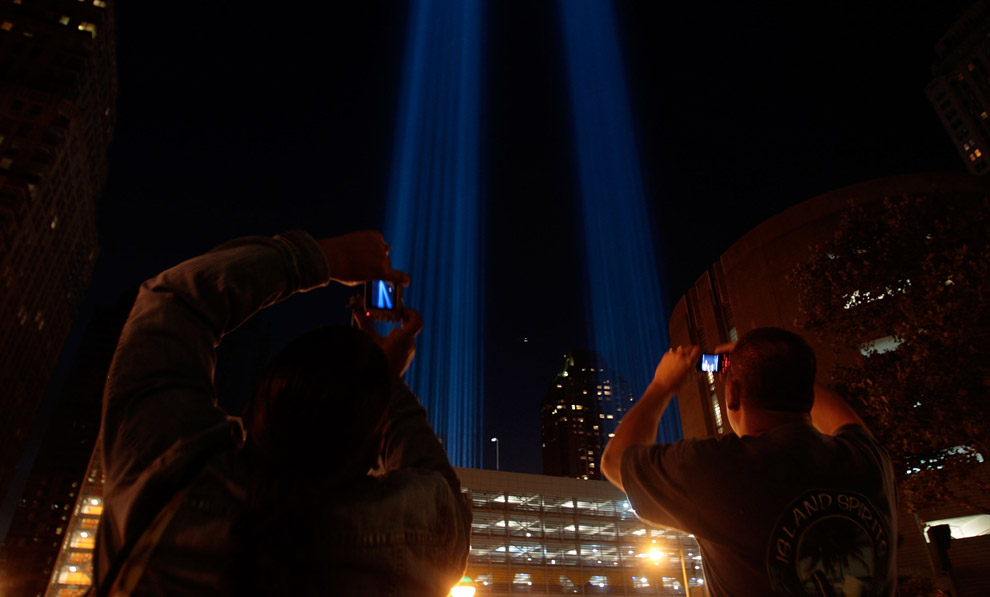 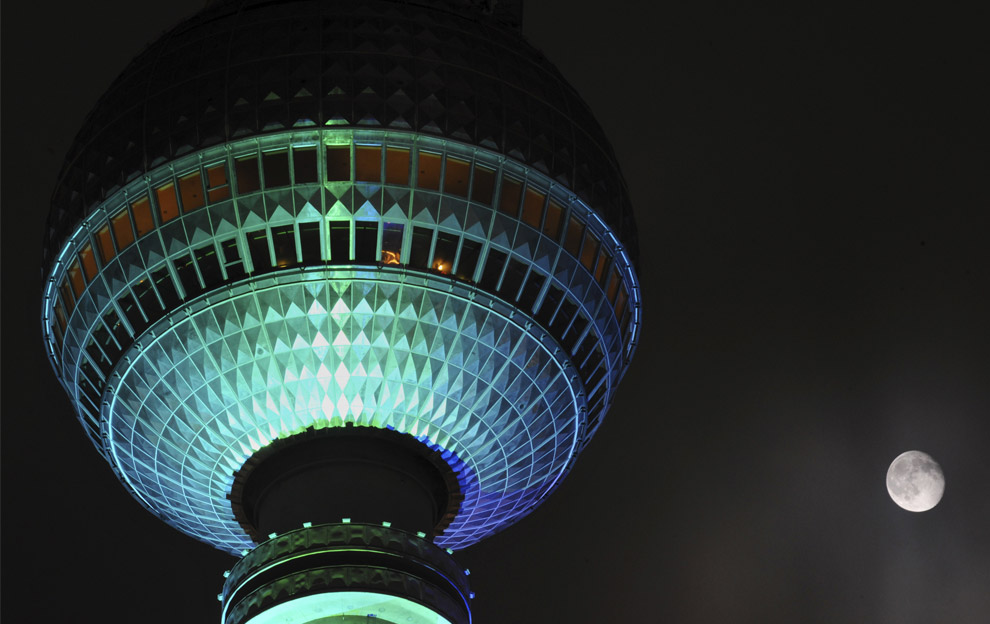 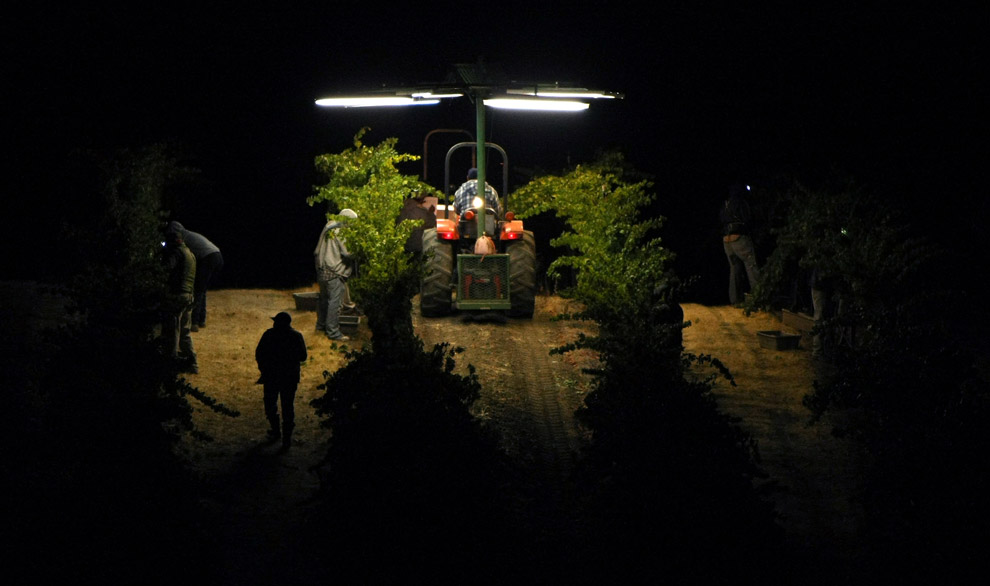 7
A tractor with lights illuminates a field of cabernet grapes during a night harvest at St. Supery Winery September 17, 2008 in St. Helena, California. Wineries in the Napa Valley are in the midst of harvesting their 2008 crop of grapes. (Justin Sullivan/Getty Images) # 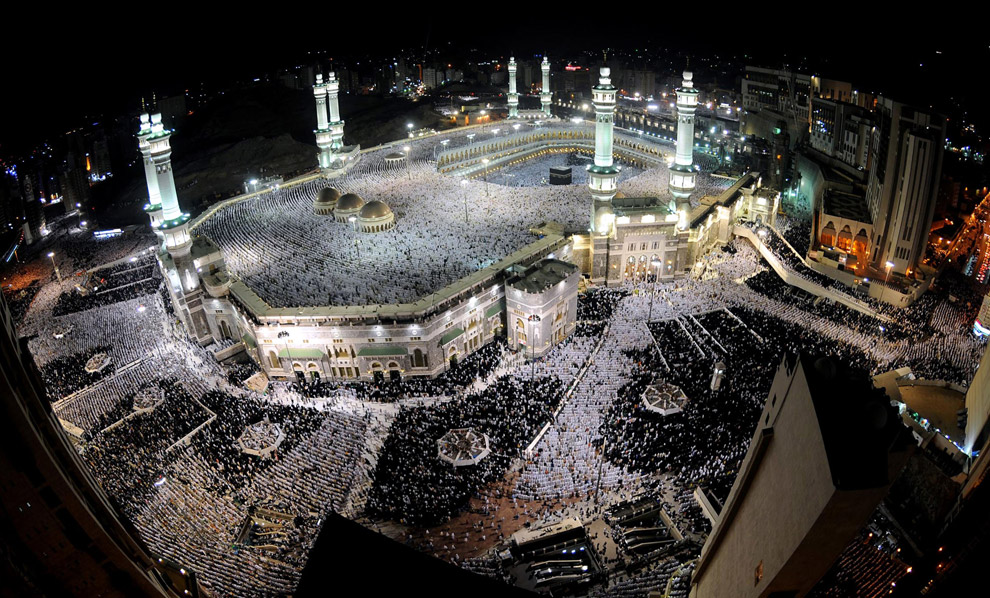 8
Hundreds of thousands of Muslims circle the Kaaba inside and outside the Grand Mosque during the last week of Ramadan in Mecca, Saudi Arabia, Monday, Sept. 28, 2008. Nearly three million Muslims attended to pray at the Grand Mosque in Macca and the Prophet Mosque in Medina. (AP Photo) # 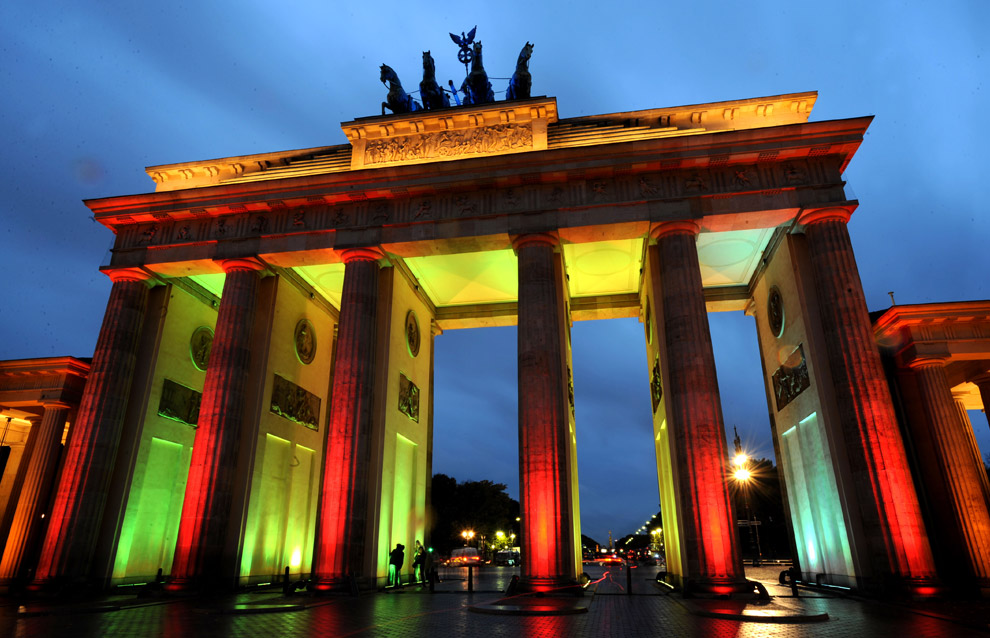 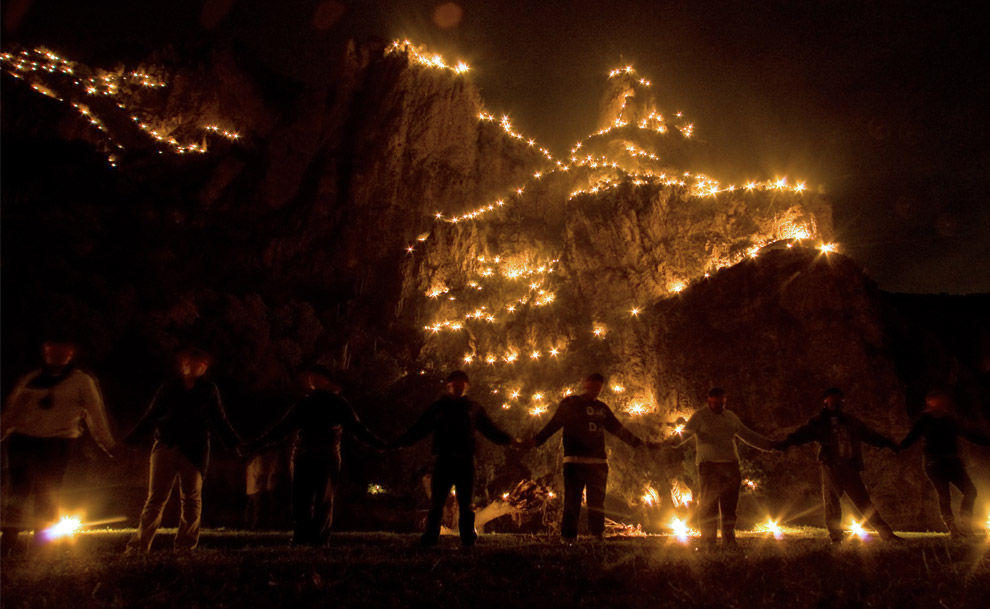 10
Mexican students with bandaged eyes take part in a "night walk" (caminata nocturna in Spanish) at the ecopark Alberto, in El Alberto, state of Hidalgo, Mexico on October 4, 2008. The night walk, advertised as an extreme sport, simulates a U.S. border crossing attempt at a park run by a community with a long-lasting history of carrying out real border journeys into the United States. (LUIS ACOSTA/AFP/Getty Images) # 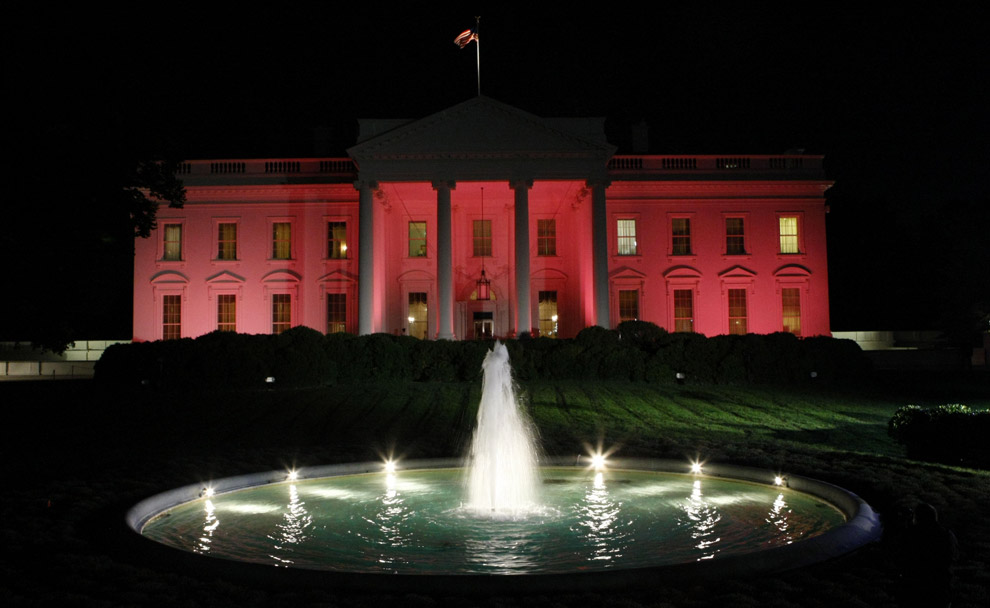 11
The White House is illuminated in pink for breast cancer awareness, Tuesday, Oct. 7, 2008, in Washington, D.C.. The White House is one of over 200 landmarks worldwide lit up in pink this month as part of Breast Cancer Awareness Month. (AP Photo/Pablo Martinez Monsivais) # 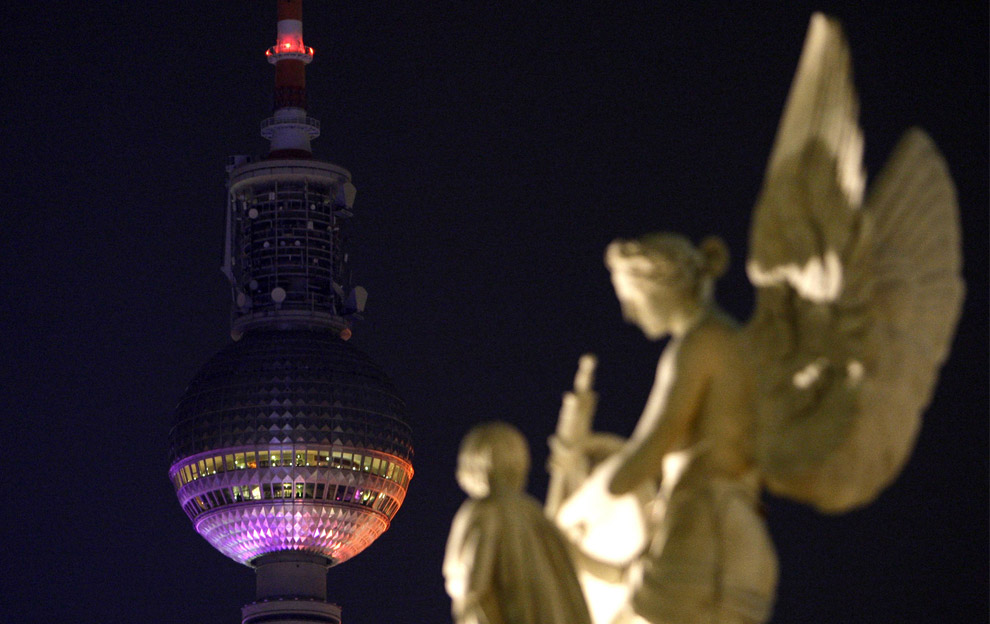 12
The illuminated Fernsehturm in Berlin is pictured next to a sculpture during a light rehearsal for the upcoming "Festival of Lights" on October 13, 2008. (REUTERS/Tobias Schwarz) # 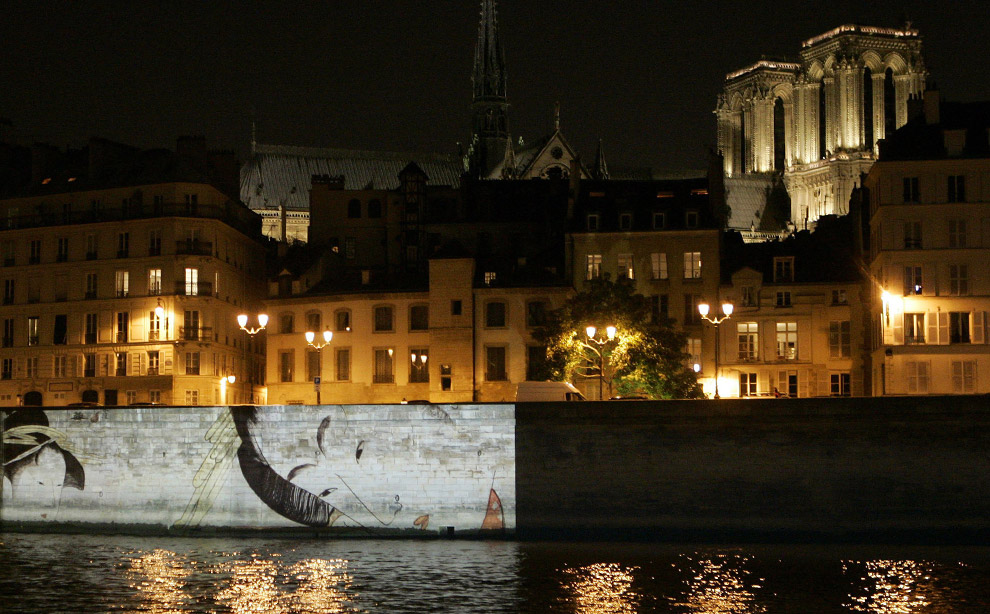 13
Giant projections of iconic Japanese artwork illuminates bridges and monuments, projected from a boat navigating the Seine river in Paris, France on Thursday, Sept. 25, 2008. The images were shown to celebrate the 150th anniversary of French-Japanese relations.(AP Photo/Francois Mori) # 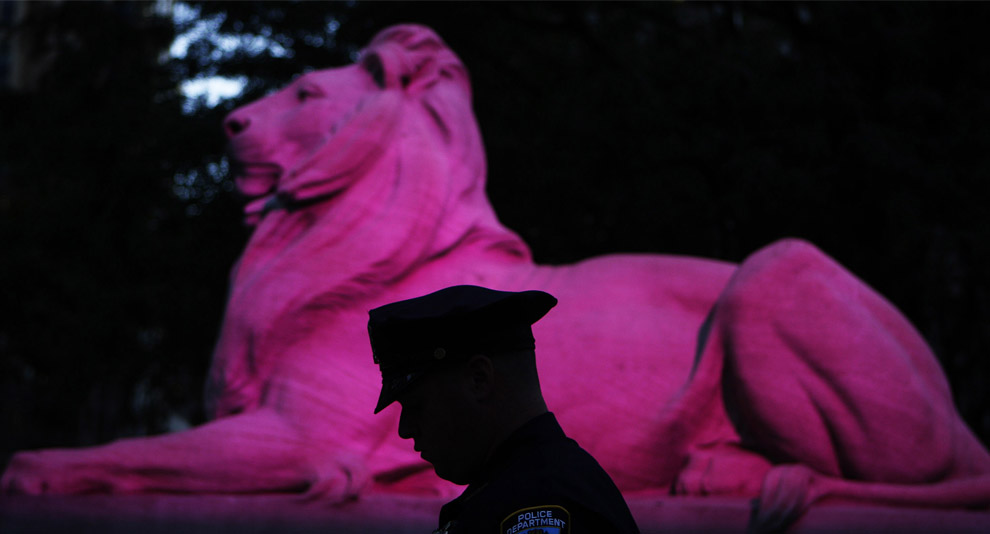 14
A police officer of the NYPD stands in front of a stone lion lit with pink lights before the DVD launch event for "Sex and the City: The Movie" in New York City on September 18, 2008. (REUTERS/Lucas Jackson) # 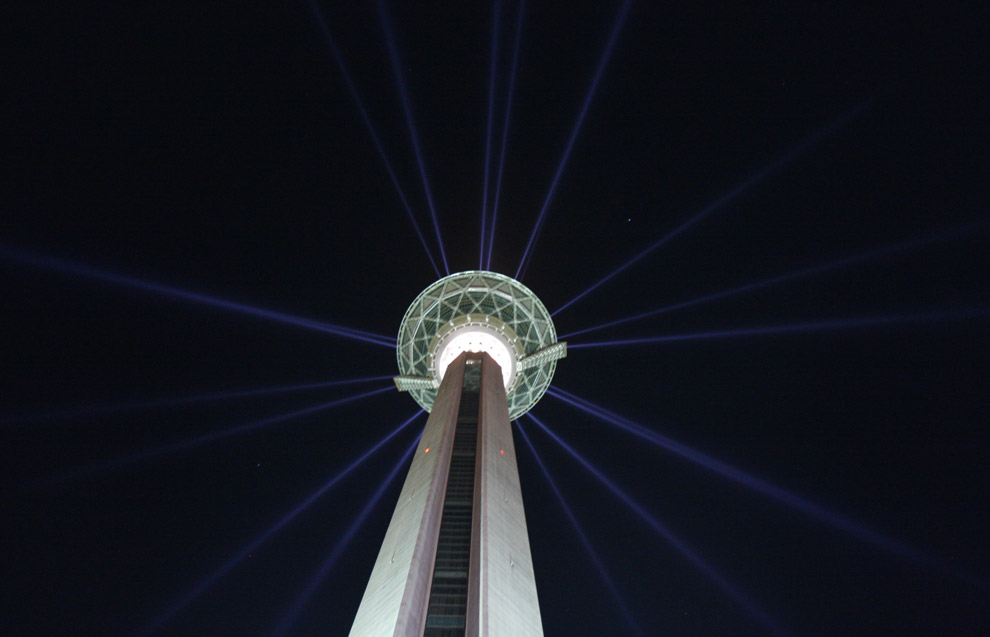 15
The Milad telecommunication tower, tallest tower in Iran, and the fourth tallest in the world, is seen during its inauguration ceremony in Tehran, Iran, Tuesday, Oct. 7, 2008. (AP Photo/Vahid Salemi) # 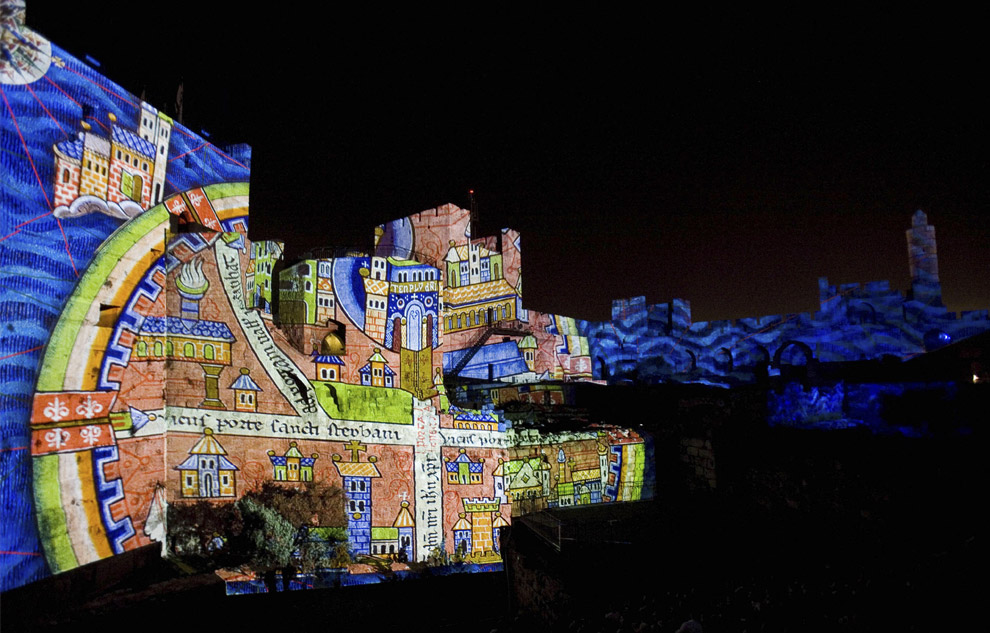 16
Lights are seen projected on the walls of the Tower of David in Jerusalem's Old City - part of a show called "Or Shalem, Jerusalem Lights the Night", staged by a group called SkertzÃ² on October 7, 2008. The Tower of David is a massive citadel that, over the centuries, has served as a fortress, military barracks and cannon position. These days, the Tower serves as a popular tourist site. (AP Photo/Bernat Armangue) # 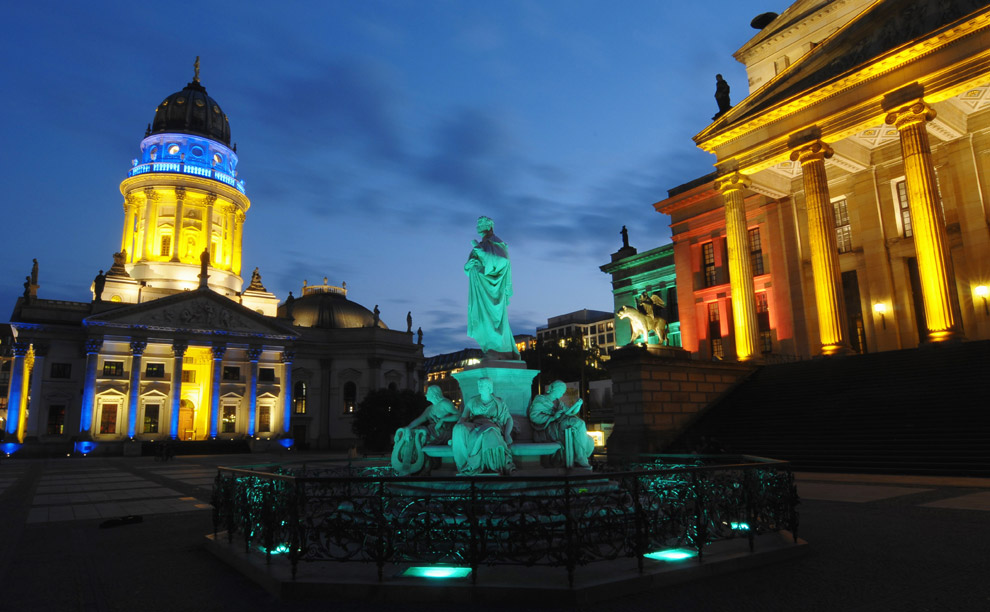 17
The Gendarmenmarkt, a square in Berlin, Germany, flanked by the concert hall at right and the Deutscher Dom at left, is colorfully illuminated during a rehearsal for the annual "Festival of Lights" on late October 13, 2008. (THEO HEIMANN/AFP/Getty Images) # 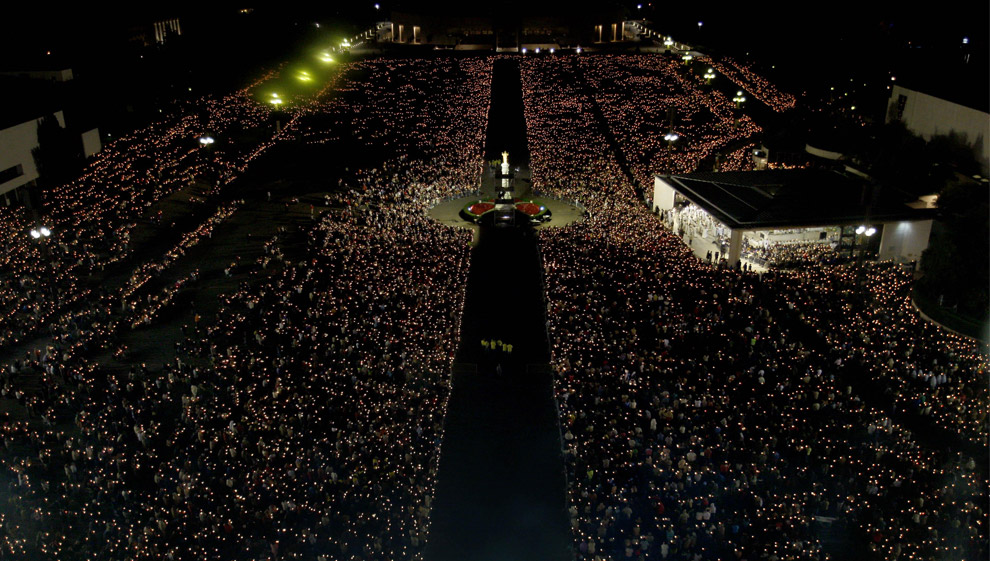 18
Pilgrims hold candles during a procession at the Catholic shrine of Fatima, Sunday night, Oct. 12 2008, in Fatima, Central Portugal. Thousands of pilgrims attended the anniversary celebrations in Fatima where three shepherd children claimed the Virgin Mary appeared to them in May 13 and Oct. 13, 1917. (AP Photo/Joao Henriques) # 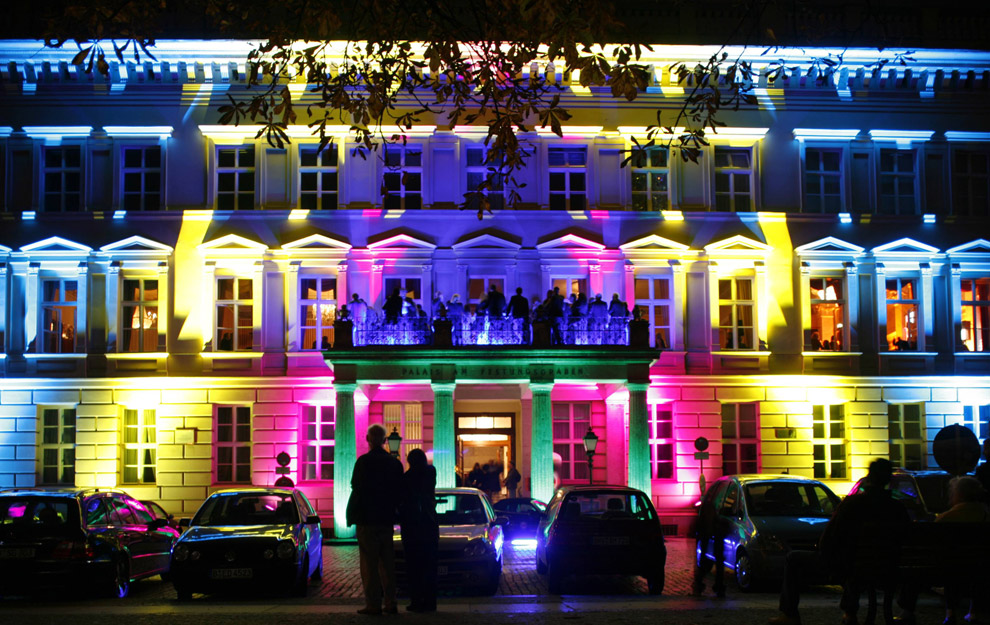 19
Pedestrians look at the Palais am Festungsgraben, an illuminated building in Berlin, Germany, during the "Festival of Lights" on October 14, 2008. (REUTERS/Pawel Kopczynski) # 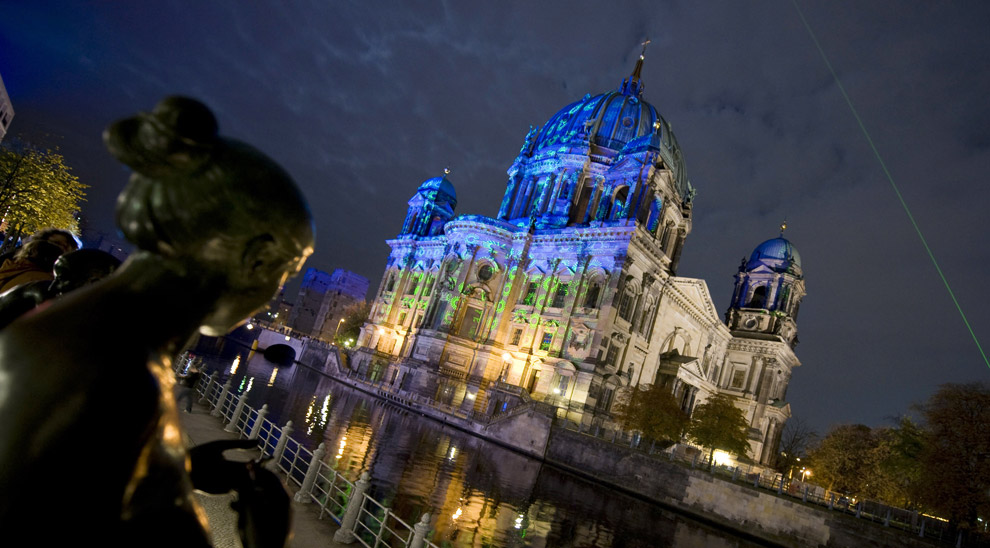 20
The Berlin Cathedral is colorfully lit on the opening evening of the annual "Festival of Lights" on late October 14, 2008. (BARBARA SAX/AFP/Getty Images) # 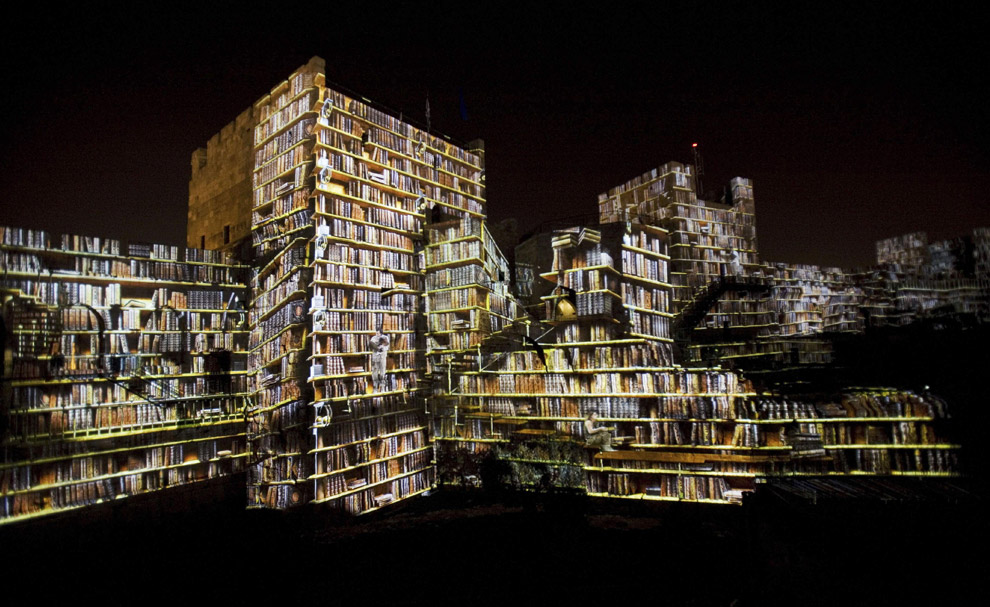 21
Images of books on shelves are seen projected on the walls of the Tower of David in Jerusalem's Old City - part of a show called "Or Shalem, Jerusalem Lights the Night", staged by a group called SkertzÃ² on October 7, 2008. The Tower of David is a massive citadel that, over the centuries, has served as a fortress, military barracks and cannon position. These days, the Tower serves as a popular tourist site. (AP Photo/Bernat Armangue) #
More links and information
Festival of Lights - Berlin, official site
SkertzÃ² - official site of the group that staged the "Or Shalem, Jerusalem Lights the Night" show (and more)
Tower of David - Wikipedia Entry
Milad Tower - Iran, Wikipeida entry
< Back to front page
RECENT ENTRIES