Over five years since it began, the war in Iraq continues, but with some recent notable progress. On Monday this week, American forces formally returned responsibility for the security of Anbar Province, at one time, the center of the Sunni insurgency, to the Iraqi Army and police force. Violence in the region has decreased dramatically - attacks down by 90% over the past two years. The continuing relative peace and order in the region remains a fragile scenario, with many former insurgents now acting as police, or as gunmen allied with American-backed "Awakening Councils". Here are some scenes from around Iraq (and a couple from here in the U.S.) over the past several months. (28 photos total) 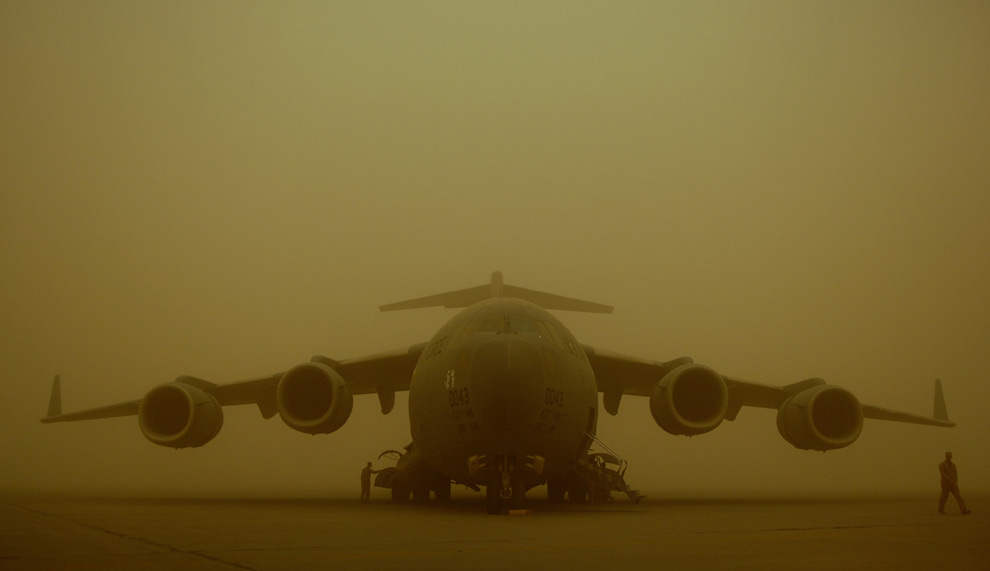 U.S. Air Force 1st Lt. Matheew Lundeen (left) and Maj. Mark Thompson, both pilots from the 817th Expeditionary Airlift Squadron, Mildenhall Air Base, England, walk around their C-17 Globemaster III aircraft while it is parked on the flight line at Sather Air Base, Iraq, during a dust storm on April 17, 2008. The dust storm reduced visibility to 100 meters and stopped all air traffic from landing at Sather Air Base. (Tech. Sgt. Jeffrey Allen, U.S. Air Force) 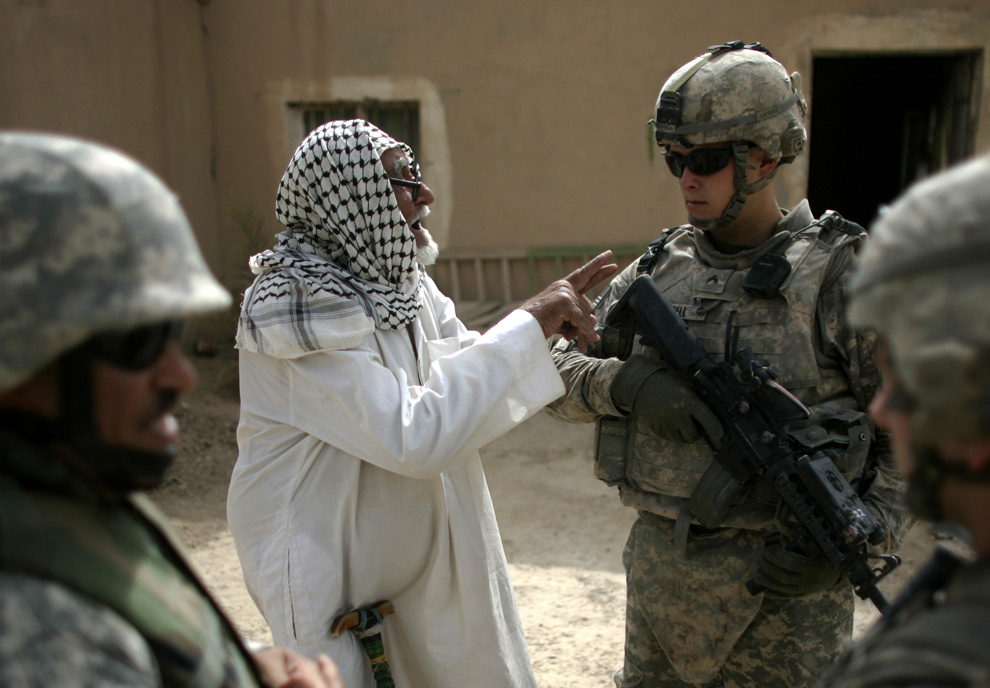 2
A man talks to U.S. army soldiers from Lion Battery, Sabre Squadron, 3rd Armored Cavalry Regiment as they patrol through the southern outskirts of Balad Ruz, in Iraq's Diyala province, some 80 kilometers (50 miles) northeast of Baghdad, Iraq, Wednesday, Aug. 13, 2008. Prime Minister Nouri al-Maliki's government on Monday had announced a weeklong suspension of military operations in Diyala to give militants a chance to surrender. (AP Photo/Marko Drobnjakovic) # 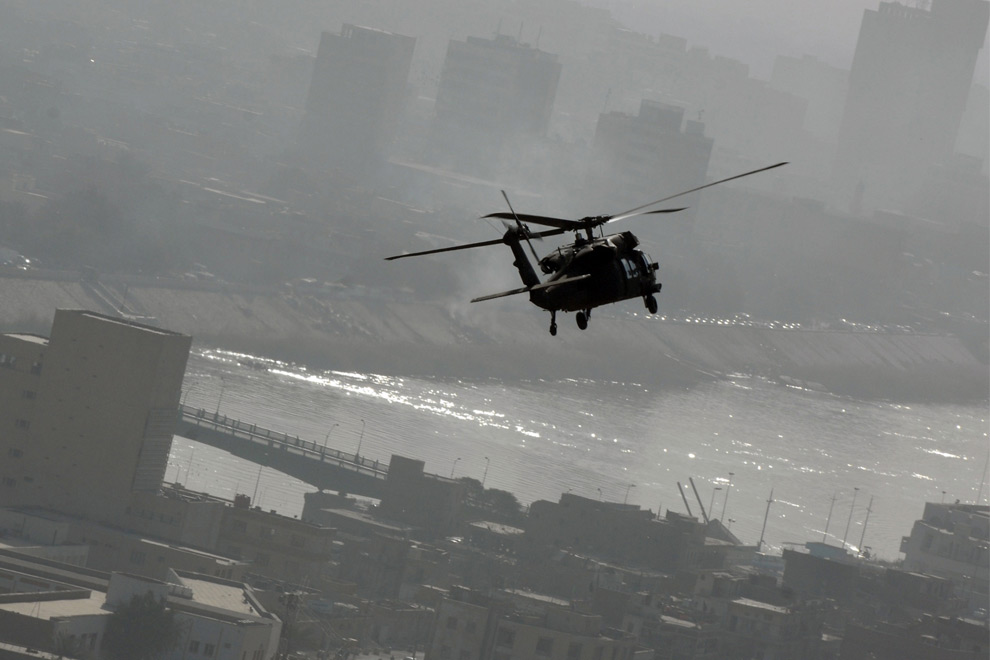 3
A UH-60 Black Hawk from Company A, 3rd Battalion, 158th Aviation - known as Task Force Storm during its current deployment in Iraq - passes over Baghdad on a mission in March. After months of deployment in support of Operation Iraqi Freedom, the 3-158th and other elements of its parent unit, Task Force XII, are moving to new missions in Iraq. (Sgt. 1st Class Chris Seaton/U.S. Army) # 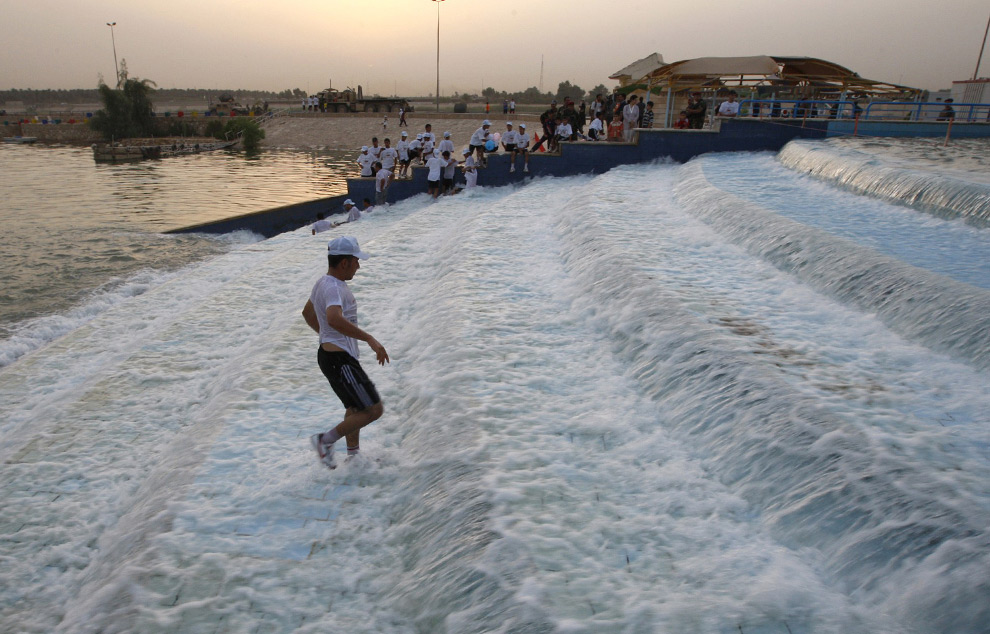 5
A resident walks in the water flowing from a giant fountain in Jadriya Lake park in Baghdad August 23, 2008. Jadriya Lake, a popular playground that has twice been shut by war and chaos, reopened on Friday to the delight of scores of Iraqis who splashed straight in, most of them teenage boys. (REUTERS/Mohammed Ameen) # 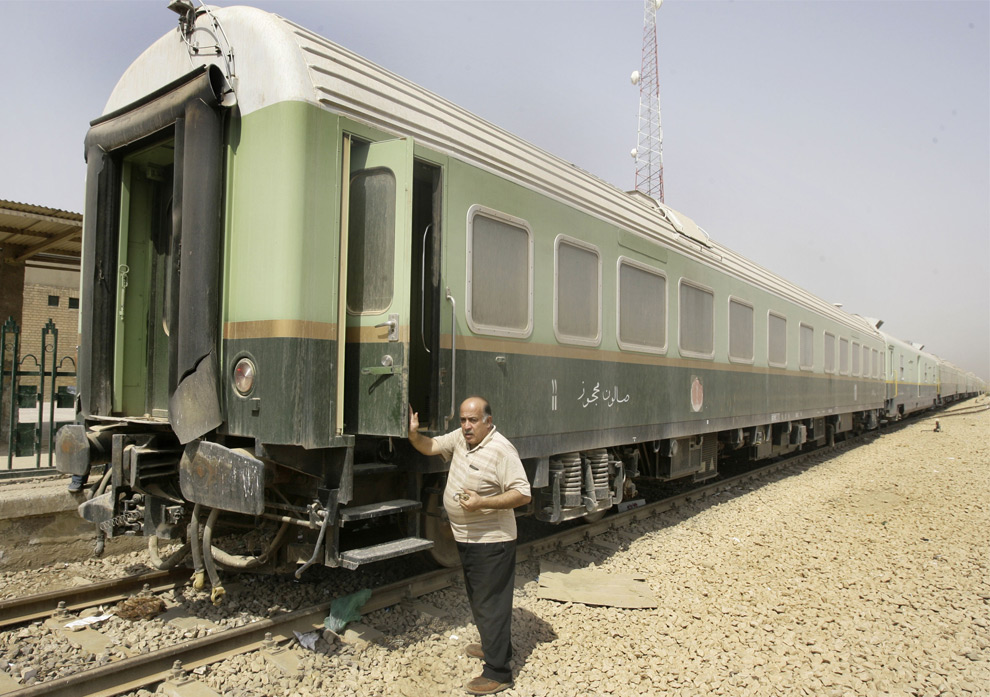 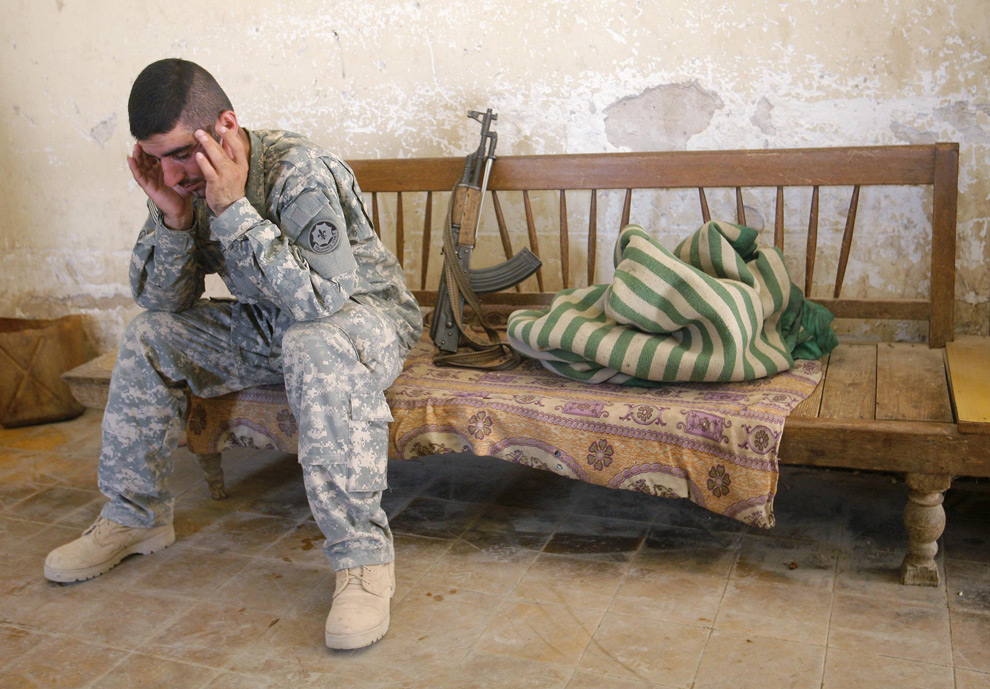 7
A translator for the U.S. army rests inside an Iraqi police station in the village of Abu Sayda in Diyala province August 20, 2008. (REUTERS/Andrea Comas) # 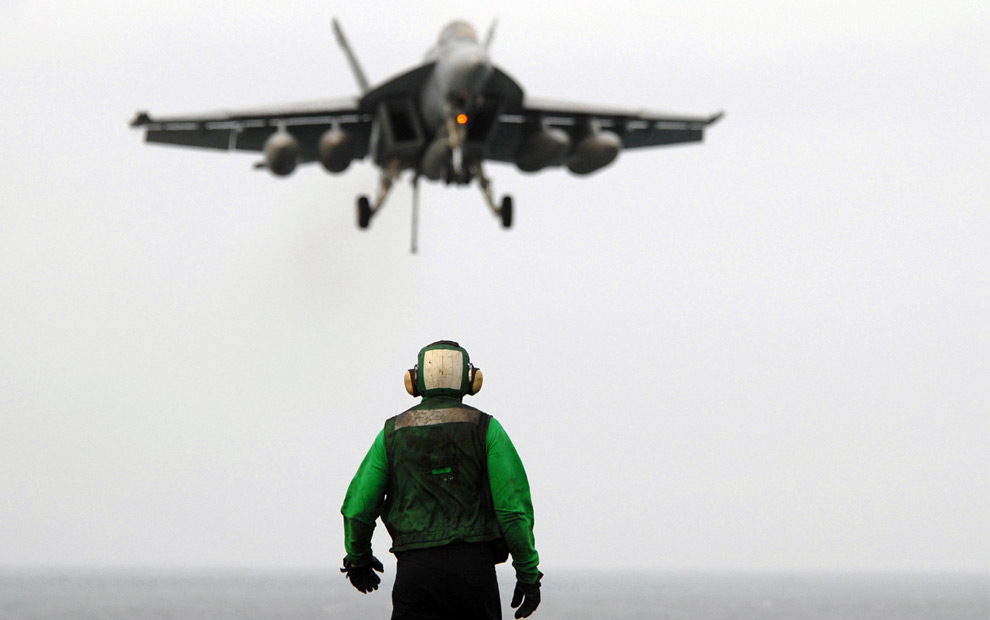 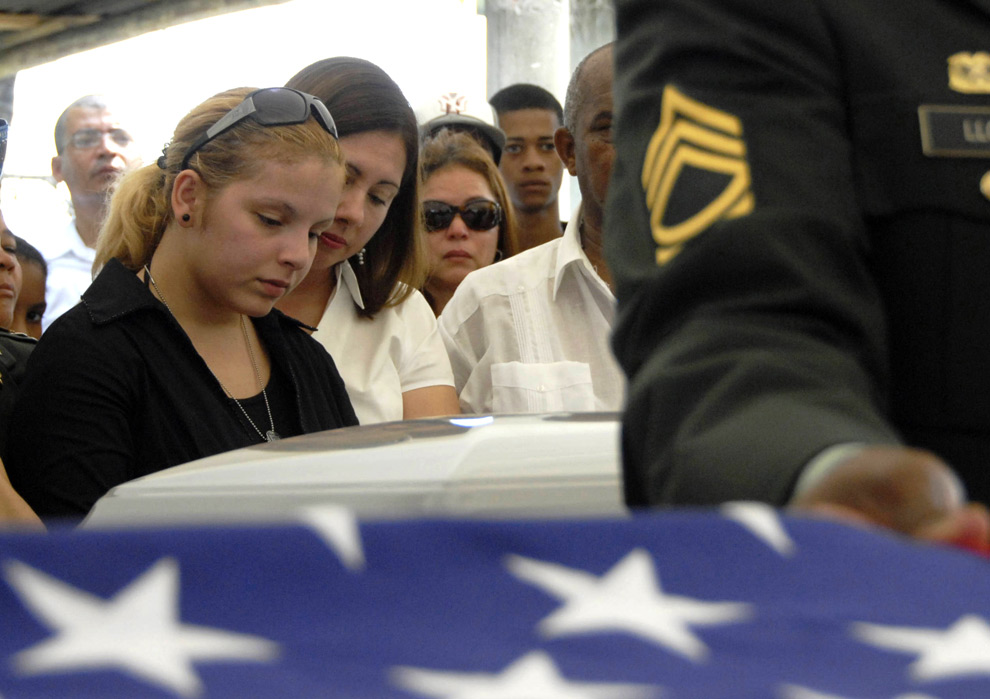 9
Nieves Ulloa (L), widow of Dominican-born U.S.Army sergeant Enrique Ulloa, mourns him during his funeral on August 21, 2008 in Santo Domingo. Sgt.Ulloa, 23, assigned to the 515th Transportation Company, 28th Transportation Battalion, was killed on August 8, 2008 in Sadr City, Iraq during a routine convoy security operation. He is survived by his wife and a seven-month-old son. (ERIKA SANTELICES/AFP/Getty Images) # 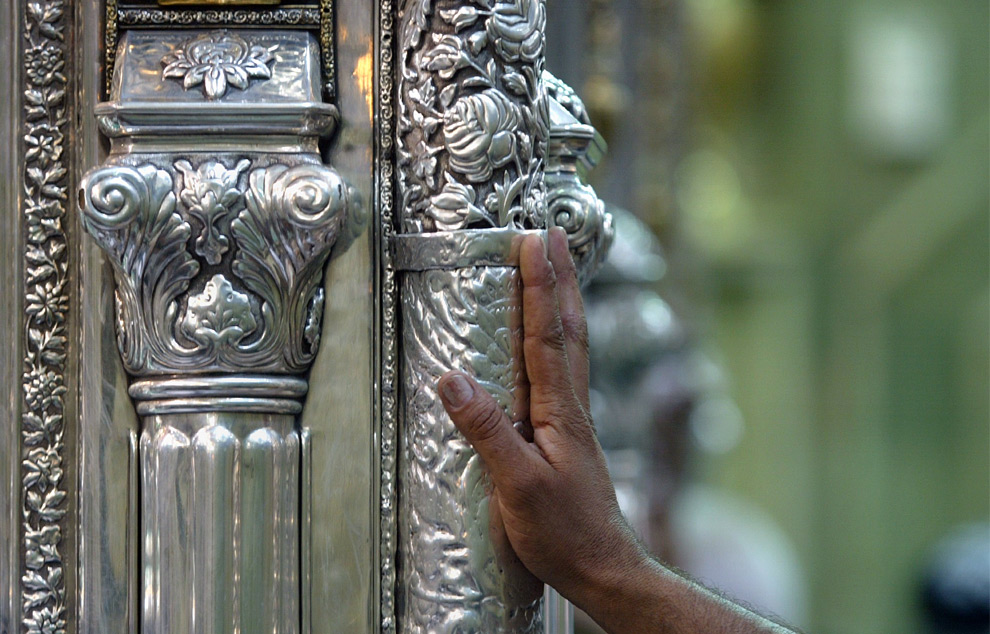 10
A hand touches a silver column in the Imam Hadrat al-Abbas Shrine on August 28, 2008, in the holy city of Karbala, visited every year by hundreds of thousands of Shiite worshipers. Iraqis have bought about 1,450 kilograms - $69 million dollars worth of silver from Swiss dealers to refurbish the shrine of this revered imam killed along with his brother Imam Hussein in the Battle of Karbala in the year 680 and buried in the city. (Mohammed Sawaf/AFP) # 11
Morgue workers in the town of Baquba, 60 kilometers northeast of Baghdad, bury 50 unidentified bodies not claimed during the last two months at a mass grave on the outskirts of town August 28, 2008. (STR/AFP/Getty Images) # 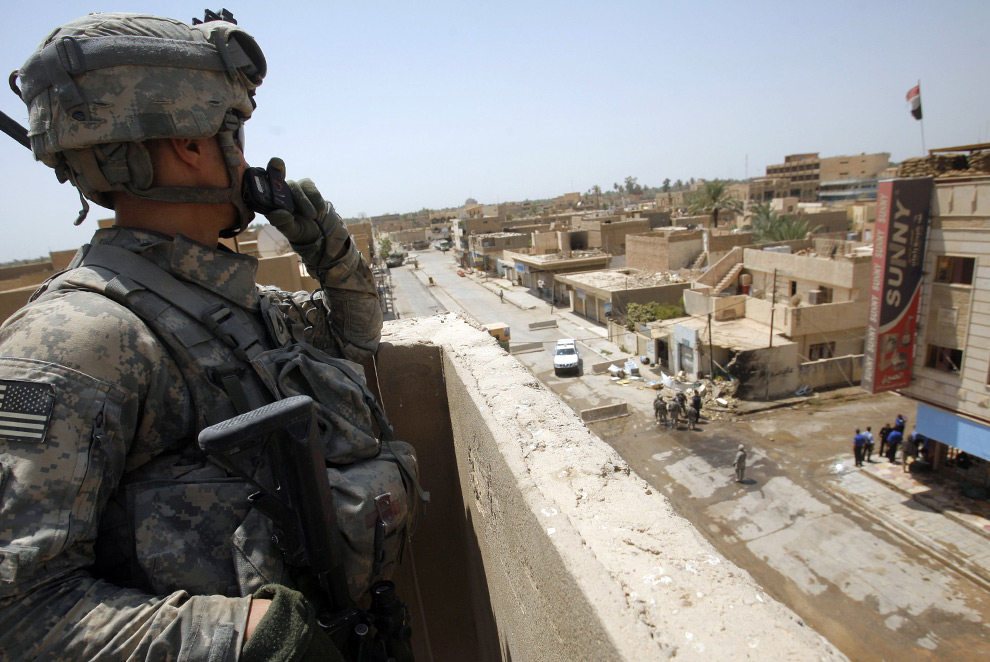 12
A U.S. soldier from the Second Stryker Cavalry Regiment secures a roof near the site of a suicide bomb attack in central Baquba, Diyala province August 11, 2008. A female suicide bomber wearing a belt packed with explosives killed a policeman and wounded 17 people when she targeted a police station, police said. (REUTERS/Andrea Comas) # 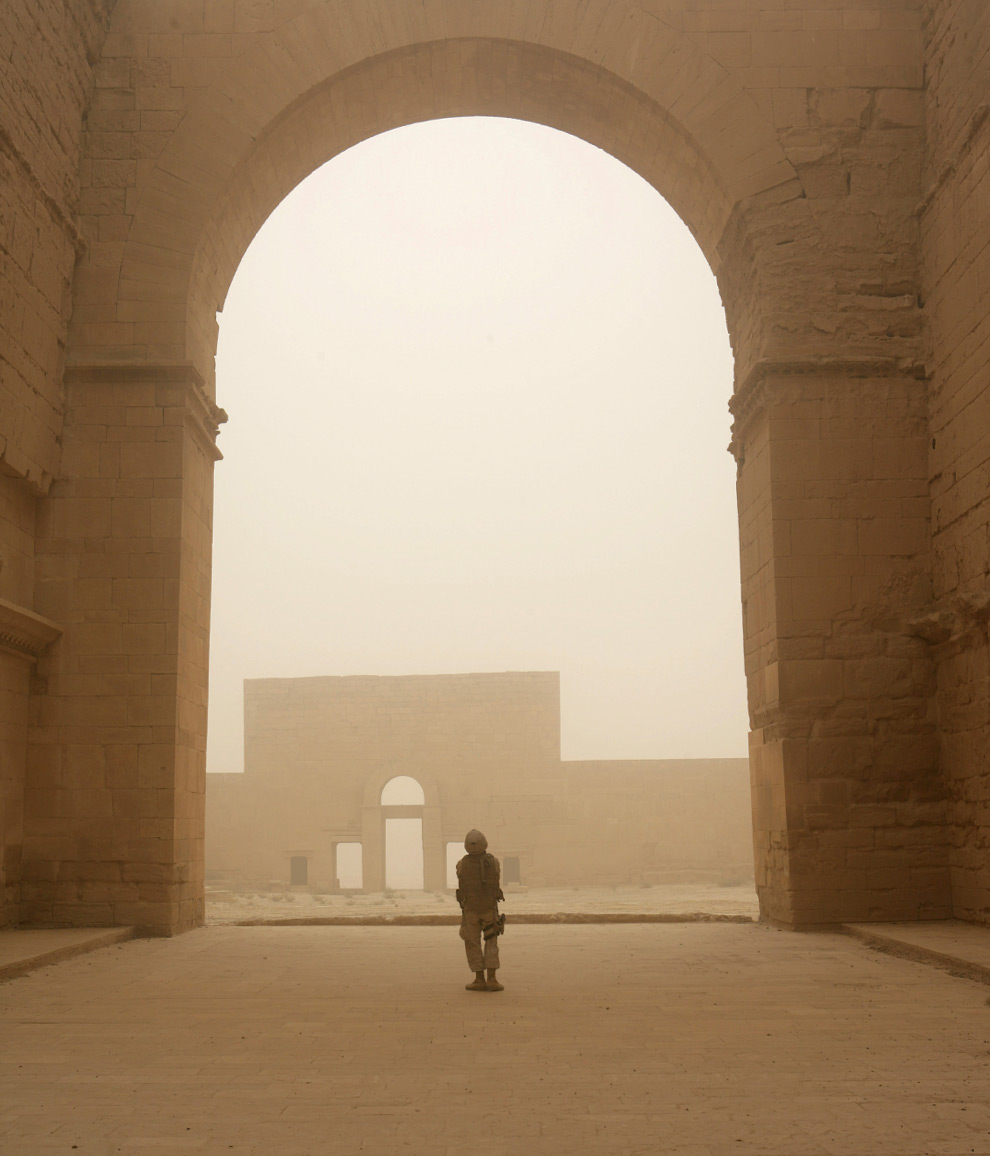 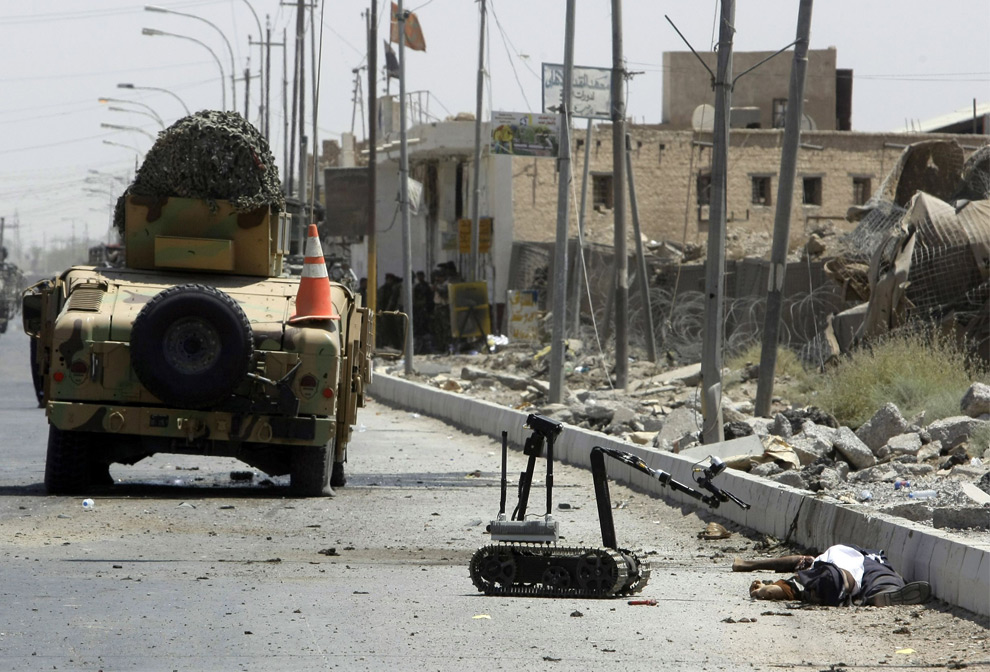 15
A robot moves towards the remains of a pair of bodies at the site of a suicide bomb attack in central Baquba in Diyala province August 12, 2008. Two people were killed and seven wounded when the bomber detonated an explosive vest near the convoy carrying Diyala Governor Raad Rasheed in the provincial capital Baquba, 65 km (40 miles) northeast of Baghdad. (REUTERS/Andrea Comas) # 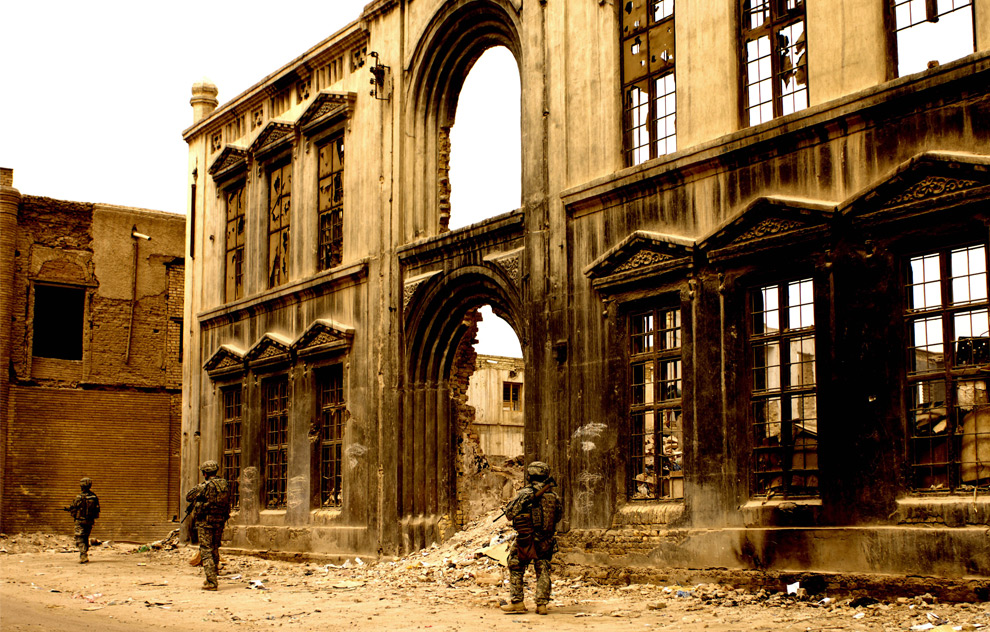 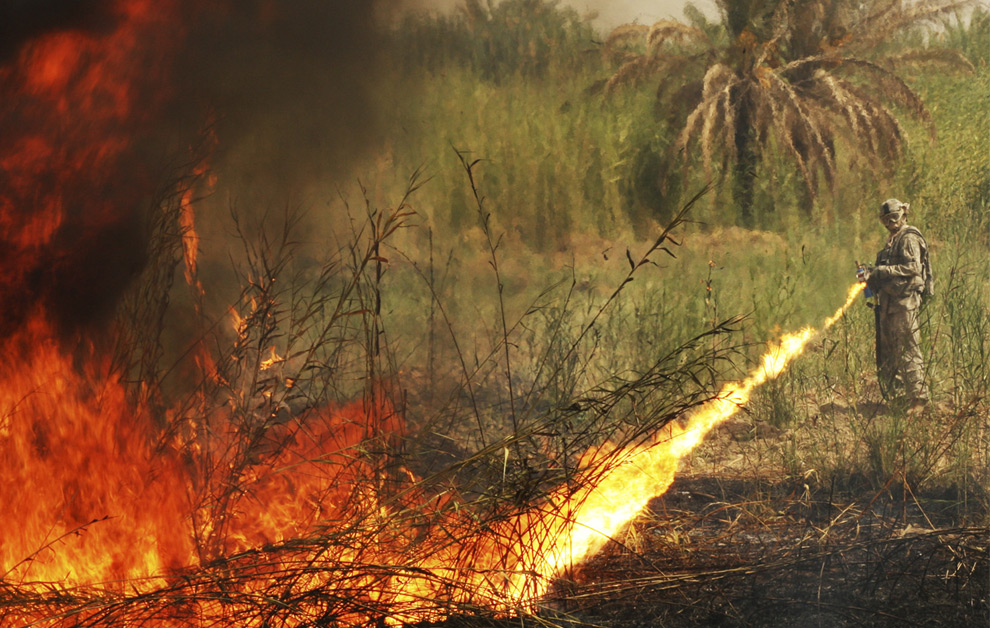 17
Sgt. Joshua Robbins, from Dickson, Tenn., serving with the 66th Engineers Company, 2nd Stryker Brigade Combat Team, 25th Infantry Division, torches an area with a flame thrower in an effort to reduce insurgents' opportunities for concealment and give coalition forces a clear line of sight, on a road between Mushada and Tarmiyah, in Iraq, Thursday, Aug. 28, 2008. (AP Photo/U.S. Army, Sgt. Whitney Houston, HO) # 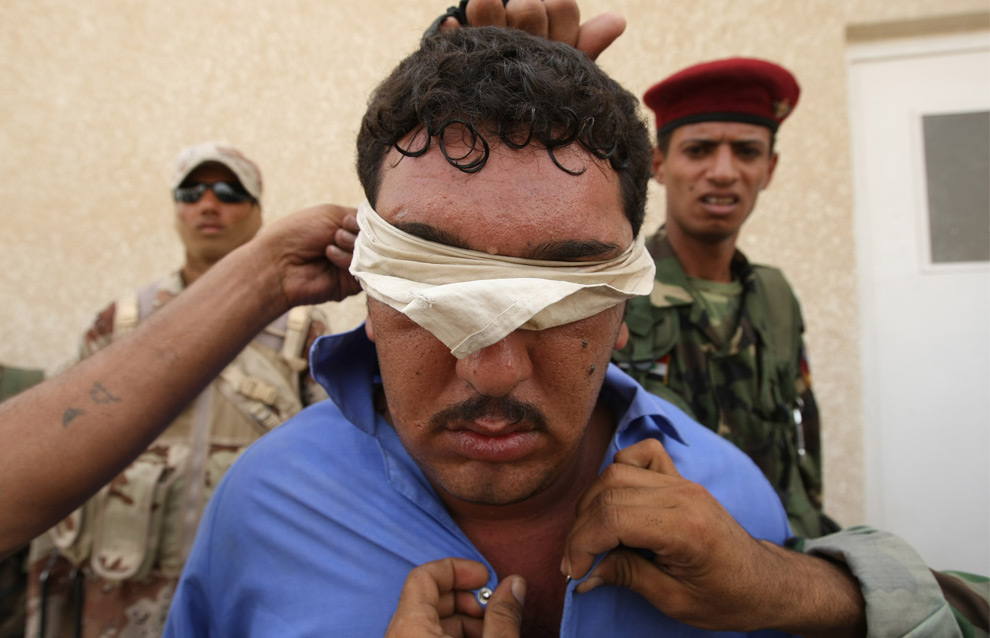 18
Iraqi security forces arrest a man suspected of being Al-Qaeda activist in Baghdad's Shiite-Sunni Jihad neighbourhood, formerly controlled by Al-Qaeda, on August 23, 2008. Some 240 Shiite families who left the mixed neighbourhood in 2006 following attacks by Al-Qaeda militants on Shiite residents returned home today under the protection of US and Iraqi security personnel to find an improved security situation in the area. (AHMAD AL-RUBAYE/AFP/Getty Images) # 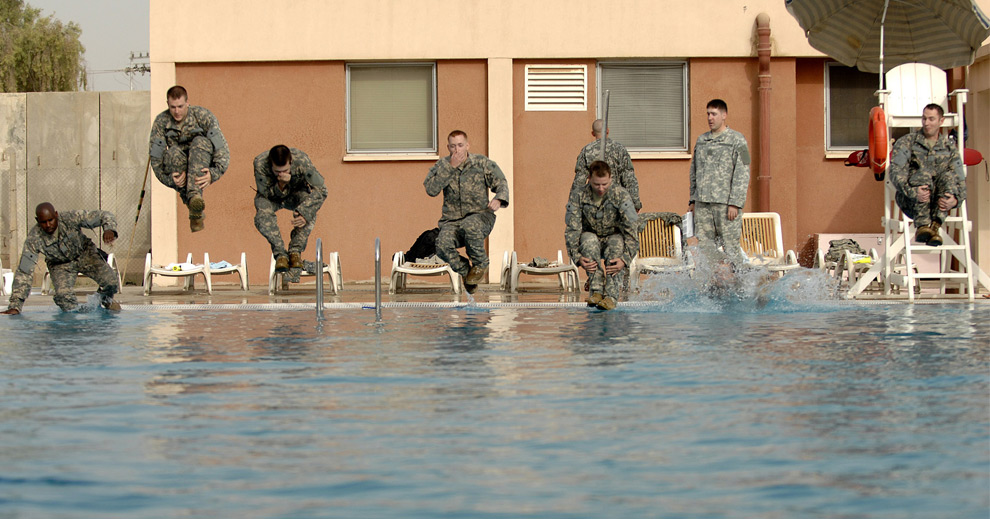 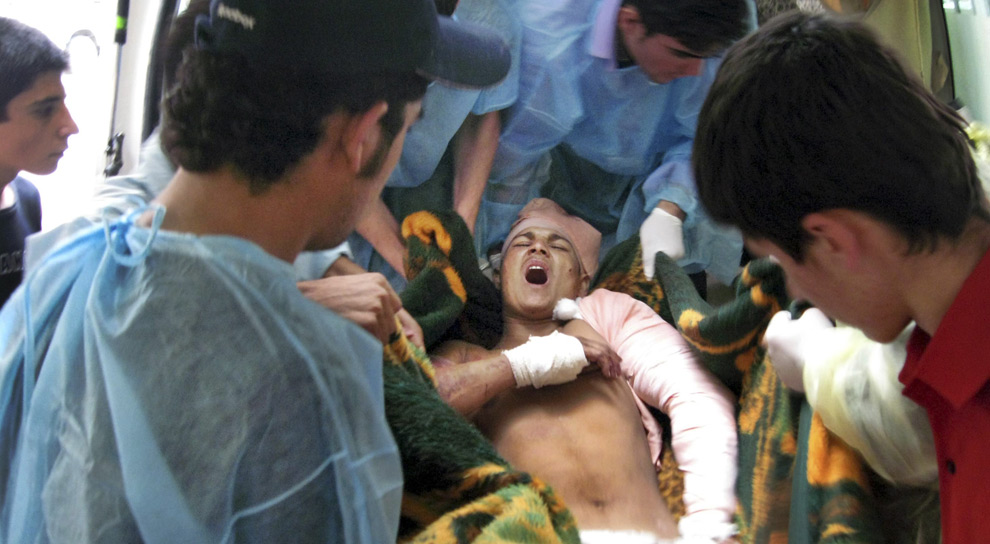 20
Yasir Nawaf, 18, who was wounded in a suicide car bomb attack which struck a group of police recruits in the Diyala town of Jalula, arrives for treatment at a hospital in the northern town of Sulaimaniyah where some of the 40 wounded had been taken, in Iraq, Tuesday, Aug. 26, 2008. A suicide bomber in a car laden with explosives sped toward a group of police recruits in Jalula on Tuesday, exploding and killing 25 people, police and witnesses said. (AP Photo/Yahya Ahmed) # 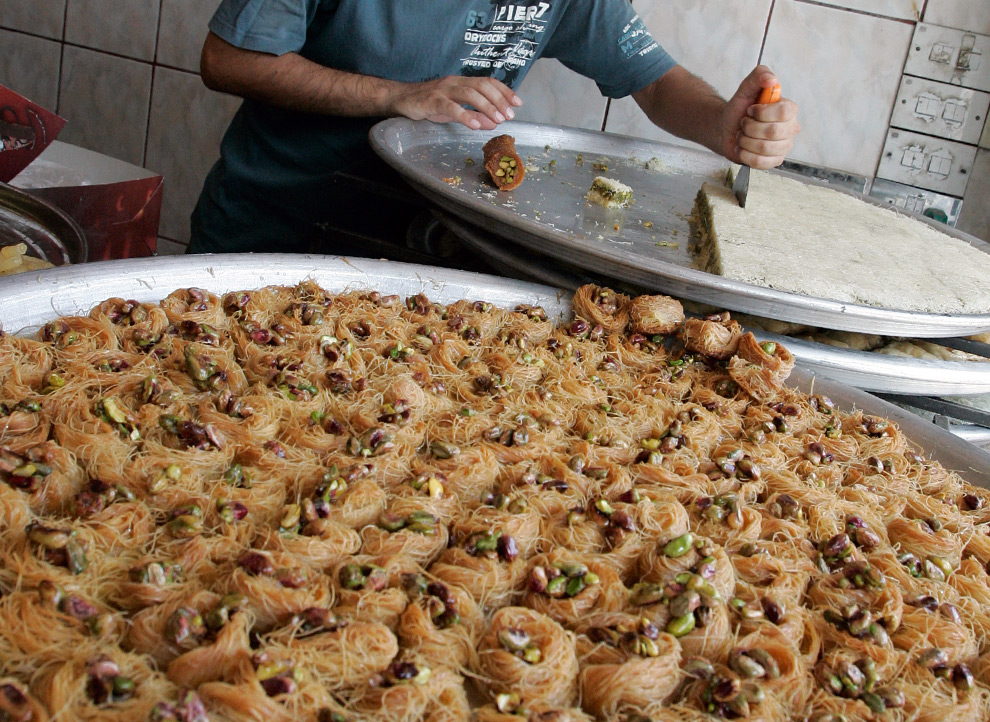 21
A baker cuts a traditional Arab sweet into small pieces with a tray of 'Shahriya', or bird nest pastry, in the foreground at a sweet bakery in Baghdad on September 3, 2008. Desserts are a main part of the the holy month of Ramadan sunset meals in Arab countries where observant Muslims are required to abstain from food, drink and sex from dawn to dusk. (SABAH ARAR/AFP/Getty Images) # 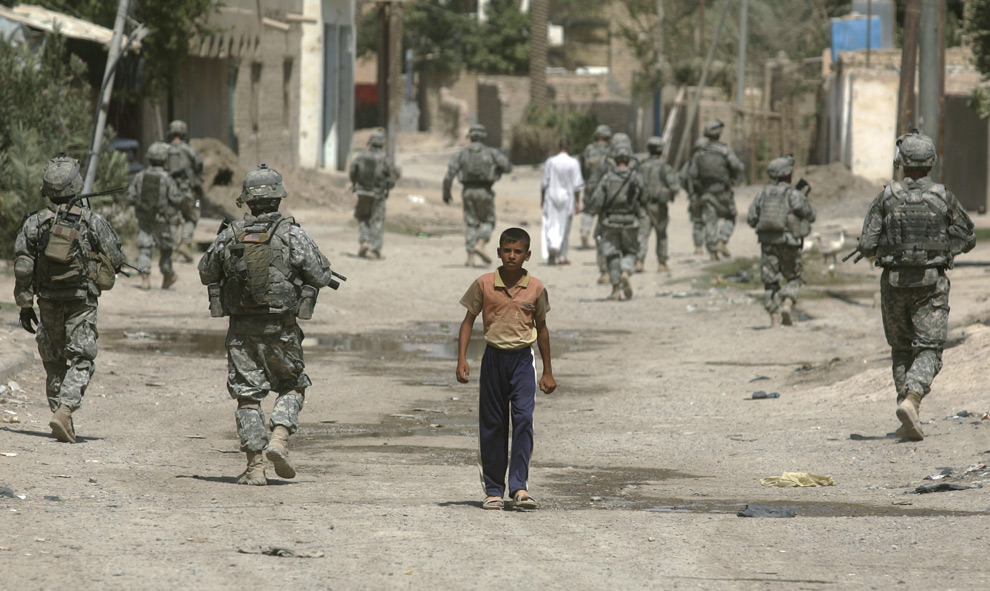 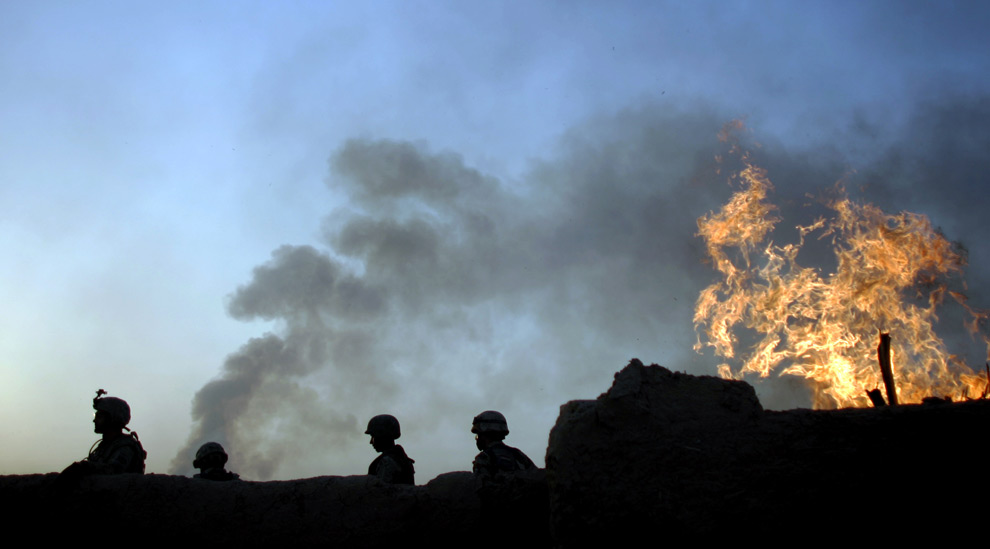 23
U.S. army soldiers from Fox Troop, Sabre Squadron, 3rd Armored Cavalry Regiment, along with their Iraqi colleagues, walk past a mud hut on fire in a deserted village on the outskirts of Balad Ruz, in Diyala province, some 75 kilometers (46.6 miles) northeast of Baghdad, Iraq, Sunday, Aug. 10, 2008. Soldiers from Fox Troop burned down a deserted village in the area, in order to deny safe haven to possible terrorists in their area of operation. (AP Photo/Marko Drobnjakovic) # 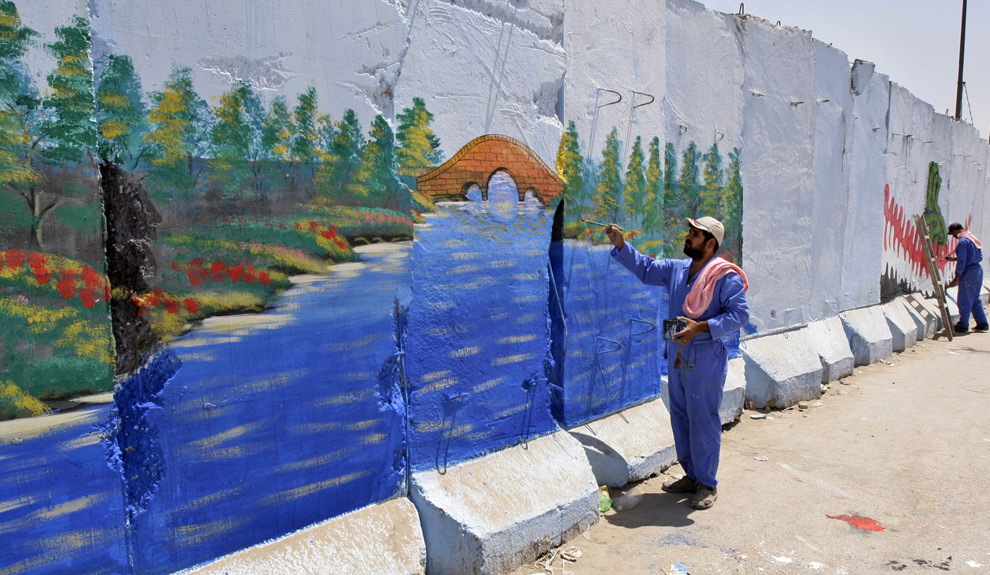 24
A painter decorates a security wall sealing off the southern section of the Shiite enclave of Sadr City in Baghdad, Iraq on Wednesday, Aug. 6, 2008. (AP Photo/Karim Kadim) # 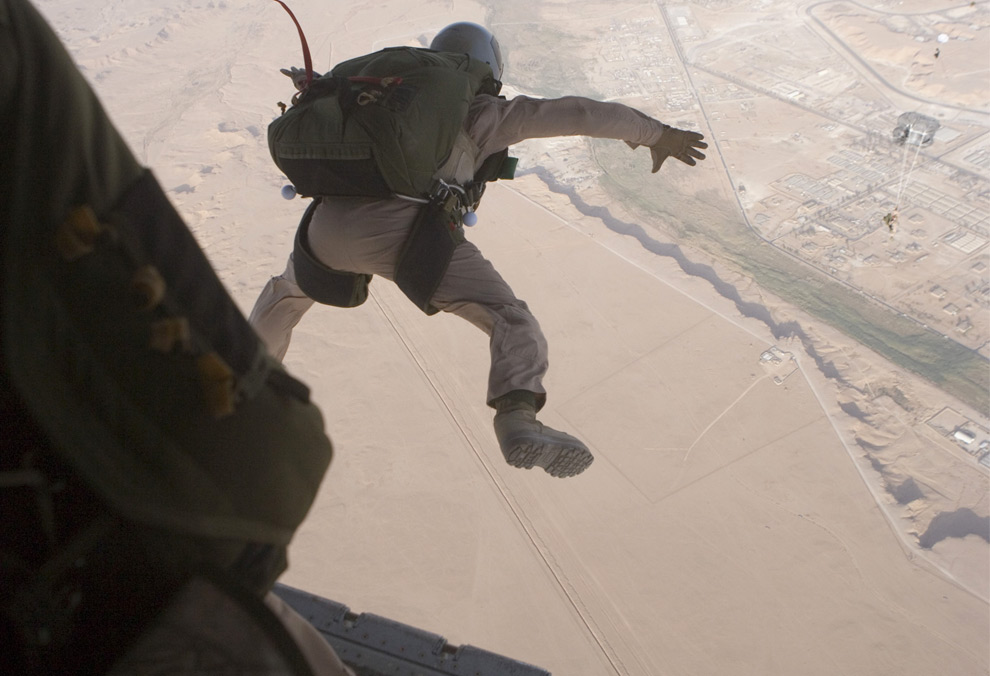 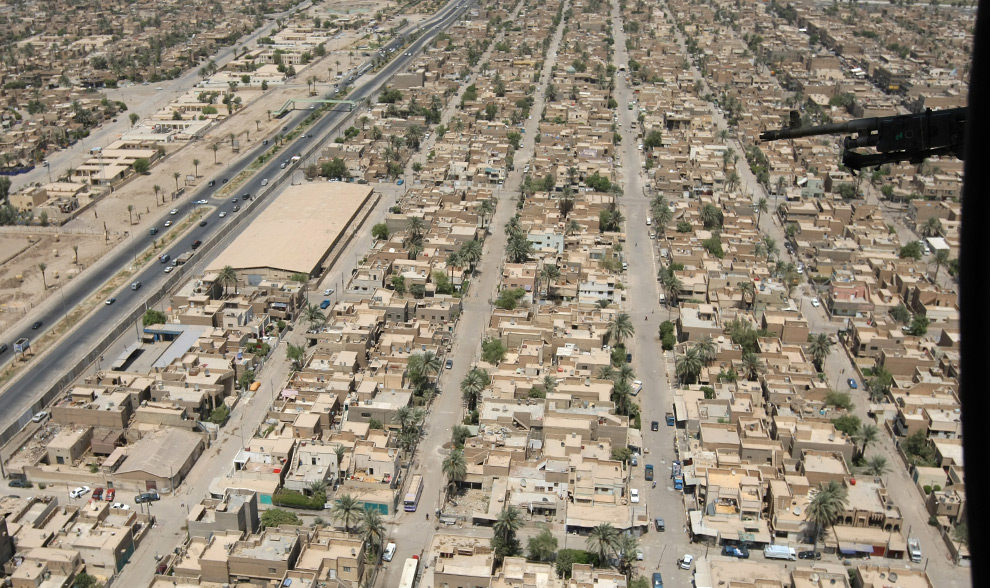 26
A US Blackhawk helicopter flies over neighborhoods in north Baghdad on August 11, 2008. In an incident which the American military said was a case of "mistaken fire", US forces killed six Iraqi security personnel north of Baghdad on September 3, 2008, according to Iraqi officials. "The Iraqis fired in the air but a few minutes later an helicopter shot at them and killed six of them and wounded 10 others," a security official with the Iraqi interior ministry said. (AHMAD AL-RUBAYE/AFP/Getty Images) # 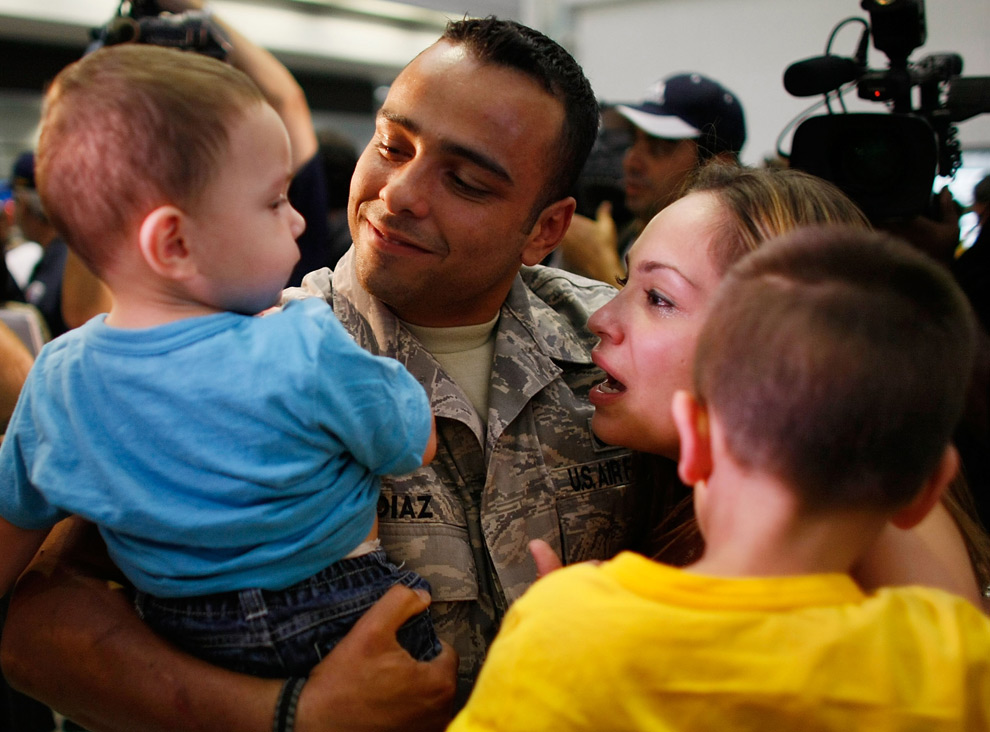 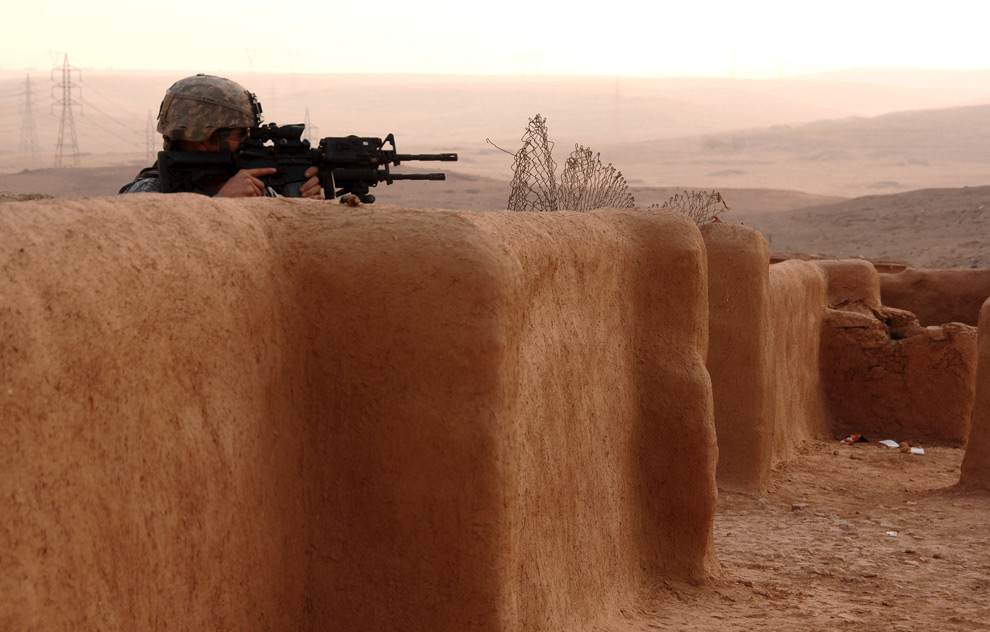 28
A U.S. Army soldier scans the immediate area from behind a dried mud wall as he provides security during a patrol in an area outside of Mosul, Iraq, on Jan. 4, 2008. Soldiers from the Army's 3rd Squadron, 3rd Armored Cavalry Regiment are patrolling in the area. (Spc. Kieran Cuddihy, U.S. Army) #
More links and information
U.S. Hands Off Pacified Anbar, Once Heart of Iraq Insurgency - NYTimes.com 09/08
The Long War - Five years after the invasion of Iraq - boston.com, 03/08
Daily Life in Sadr City, Iraq - The Big Picture, 06/18/08
Iraq NYTimes.com Topic page
< Back to front page
RECENT ENTRIES