The Space Shuttle Atlantis is scheduled to launch next month (October 8th), carrying new instruments, batteries and gyroscopes to the Hubble Space Telescope. This will be the final servicing mission to Hubble, the 30th flight of the 23-year old Atlantis, and one of the final 10 flights of the Space Shuttle program, which will be retired in 2010. Even though Shuttle launches may seem to have become commonplace, their preparation and execution is still a months-long process, requiring the work and diligence of thousands to make sure the aging, complex systems are all in perfect condition for launch. Here are some photos of the ongoing preparations for the launch of this mission, STS-125, some of the people involved in making it work, and the crew, who will assume the risks to help keep Hubble alive. (23 photos total) 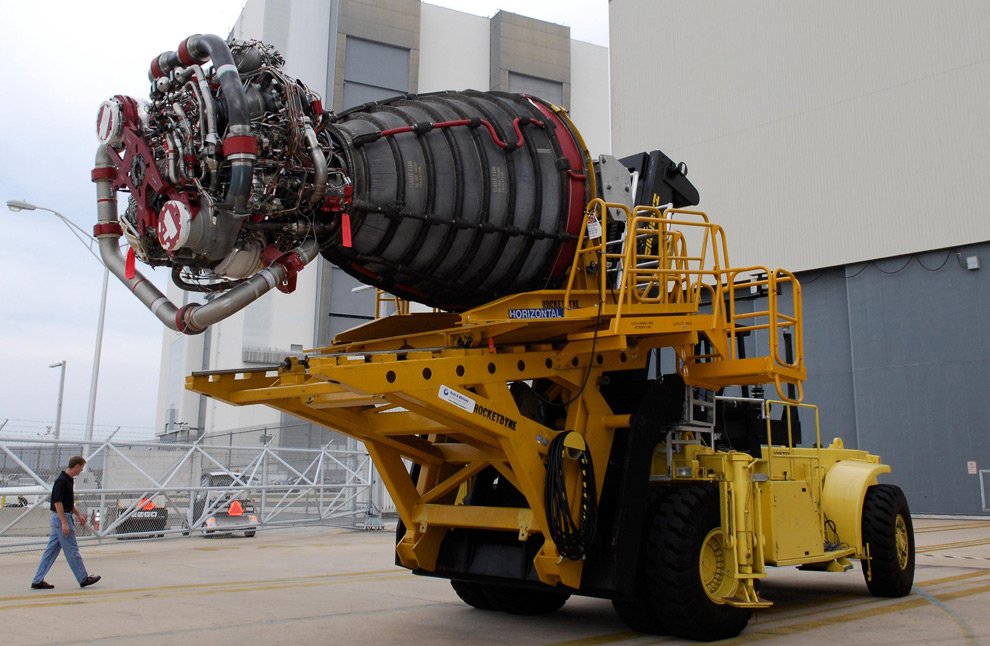 One of the three main engines for space shuttle Atlantis is transported to bay number 1 at NASA Kennedy Space Center's Orbiter Processing Facility for installation on June 10, 2008. Atlantis is the designated vehicle for the STS-125 mission to service the Hubble Space Telescope. (NASA/Kim Shiflett) 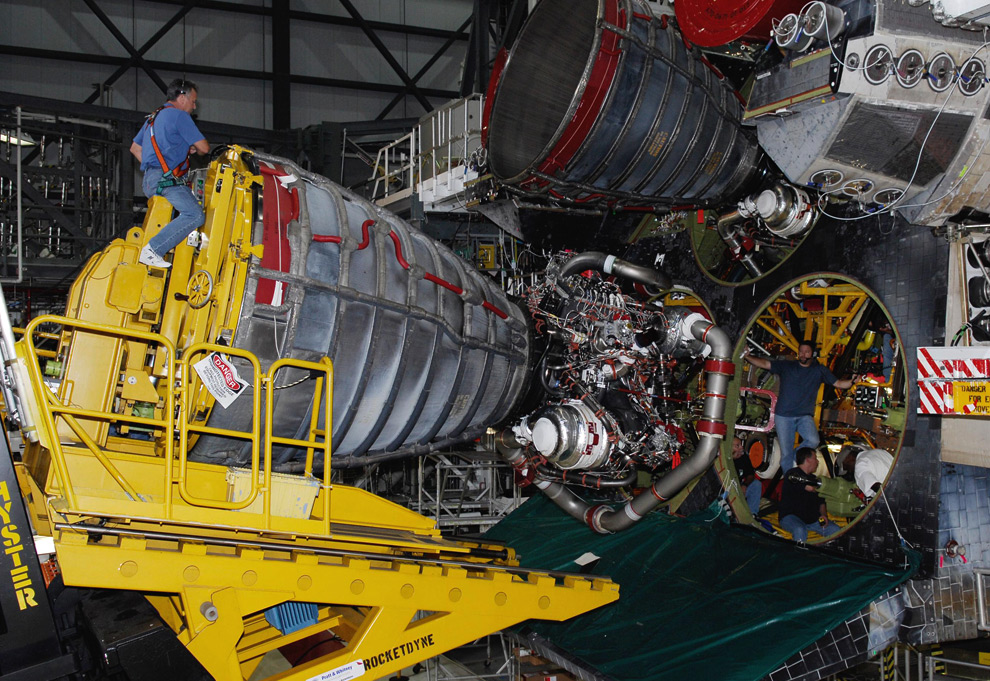 2
On June 11, 2008, in NASA Kennedy Space Center's Orbiter Processing Facility bay 1, technicians coordinate the movement of one of the three main engines being installed on space shuttle Atlantis. Launch is targeted for Oct. 8. (NASA/Kim Shiflett) # 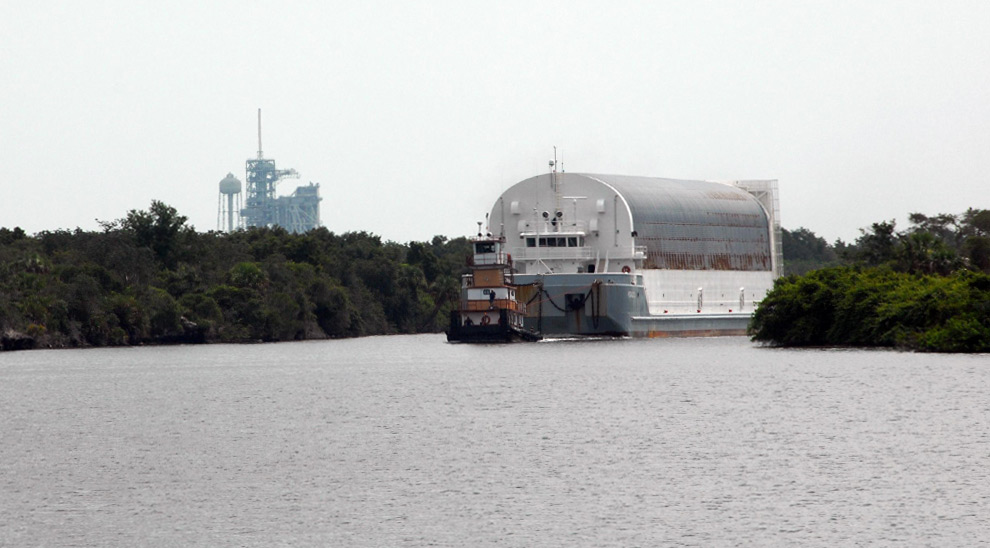 3
The Pegasus barge carrying Atlantis' external fuel tank is towed into the turn basin in the Launch Complex 39 Area at NASA's Kennedy Space Center on July 15, 2008. The tank will be offloaded and moved to the Vehicle Assembly Building, once inside the building, it will be raised to vertical, lifted and moved into a checkout cell. (NASA/Jack Pfaller) # 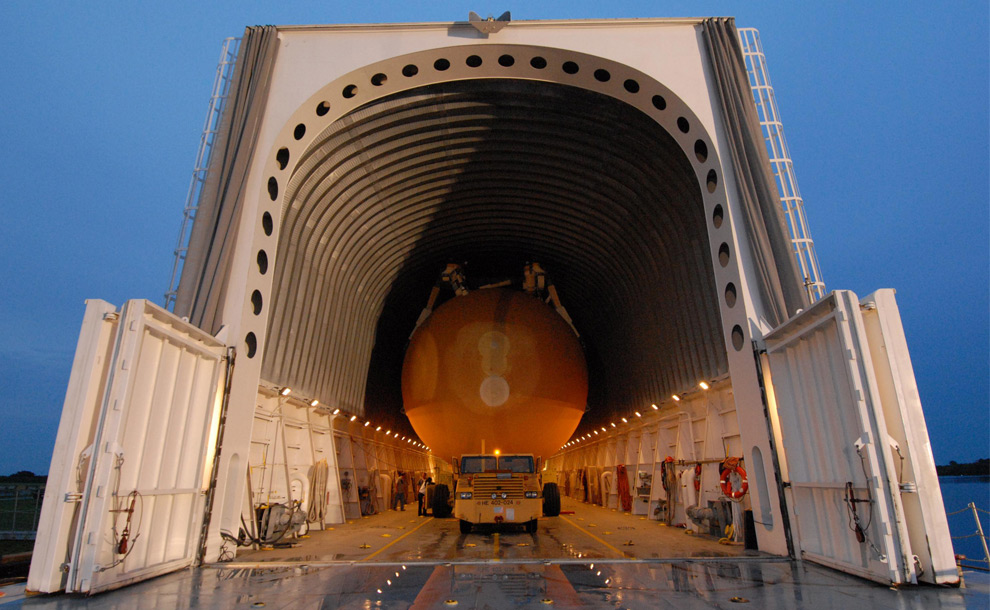 4
In the Launch Complex 39 Area at NASA's Kennedy Space Center in Florida, the external tank for space shuttle Atlantis' STS-125 mission to the Hubble Space Telescope sits ready for offloading from the Pegasus barge on July 15, 2008. Next stop is the Vehicle Assembly Building, where the tank will be raised to a vertical position, lifted and moved into a checkout cell in the cavernous building. (NASA/Amanda Diller) # 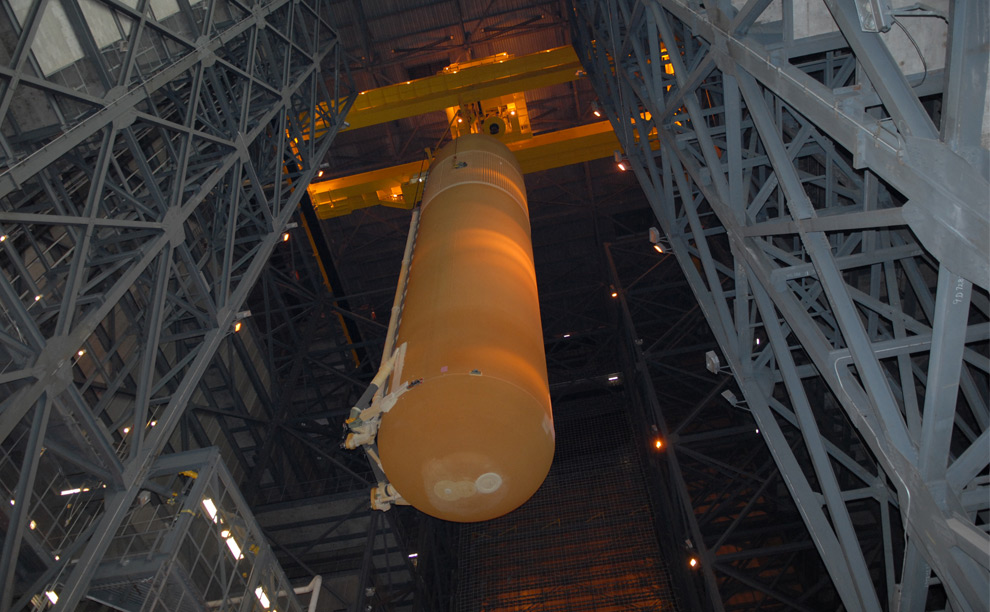 5
In the Vehicle Assembly Building at NASA's Kennedy Space Center, the external tank for space shuttle Atlantis is lifted out of the checkout cell. The tank will be moved to high bay 3 and lowered toward the solid rocket boosters for mating. The tank and boosters will be secured on the mobile launcher platform below. (NASA/Jack Pfaller) #

6
This view shows storm clouds gathering over Launch Complex 39 at NASA's Kennedy Space Center on July 29th, 2008, a common occurrence at this time of the year in Florida. The 525-foot-tall Vehicle Assembly Building towers above the complex, in the center, with the Launch Control Center nestled at its base to the right. The turn basin is behind the trees, at right. (NASA/Chris Chamberland) # 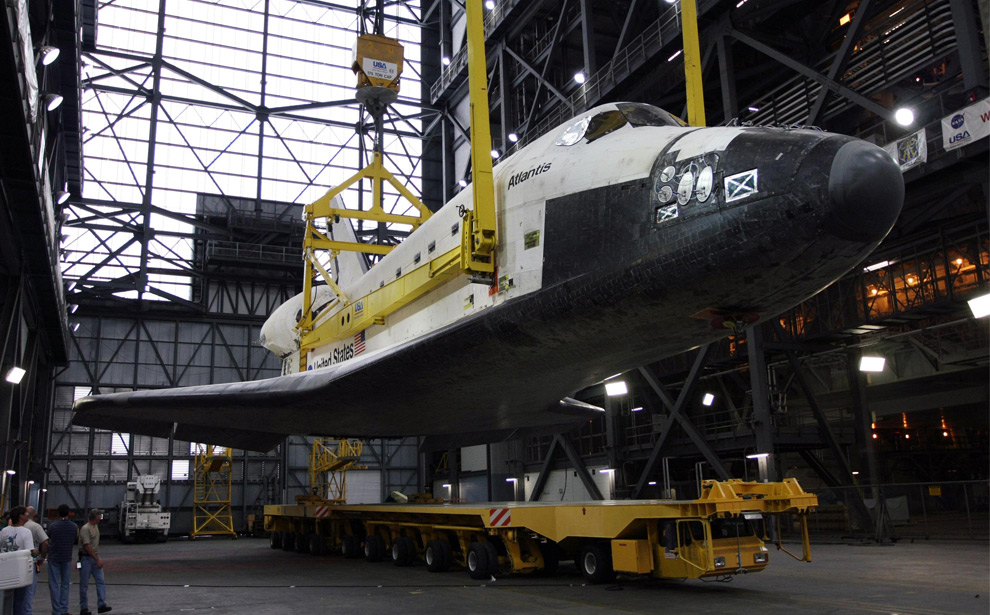 8
Space shuttle Atlantis is suspended above the transfer aisle in the Vehicle Assembly Building on August 23, 2008. The shuttle will be lifted into high bay 3 and joined with the two solid rocket boosters and external tank. (NASA/Dimitri Gerondidakis) # 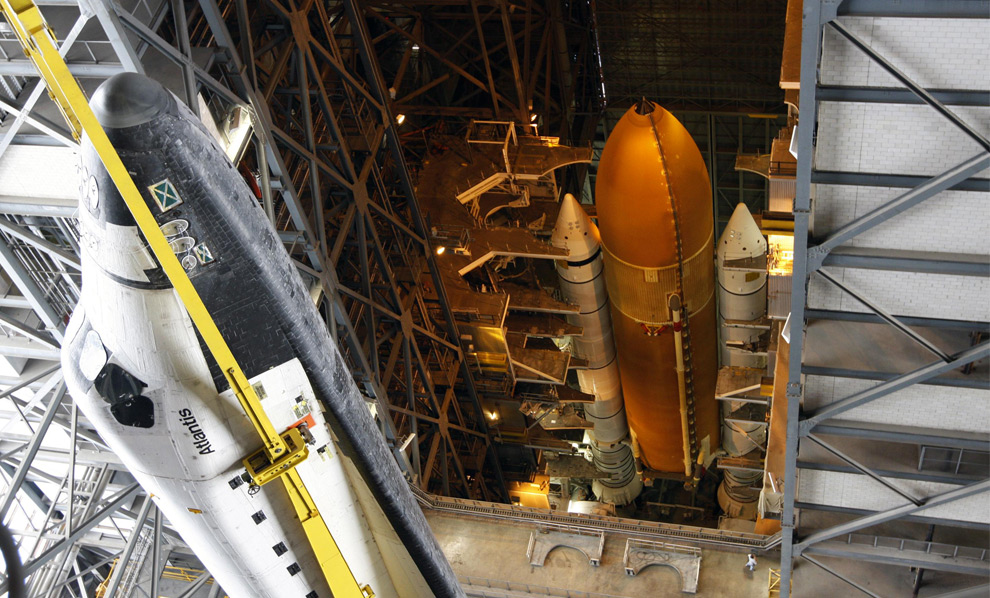 9
On August 23, 2008, Atlantis is moved across the I-beam toward the waiting external fuel tank and twin solid rocket boosters in high bay 3 of Kennedy's Vehicle Assembly Building, where they will be attached. Note the technician standing at bottom right for a sense of scale. (NASA/Dimitri Gerondidakis) # 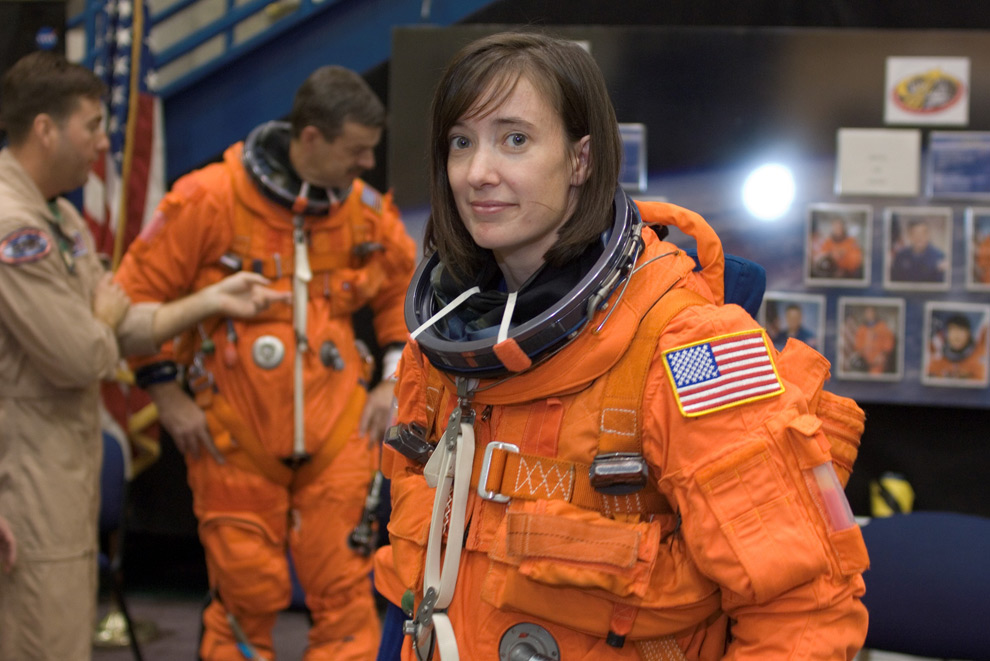 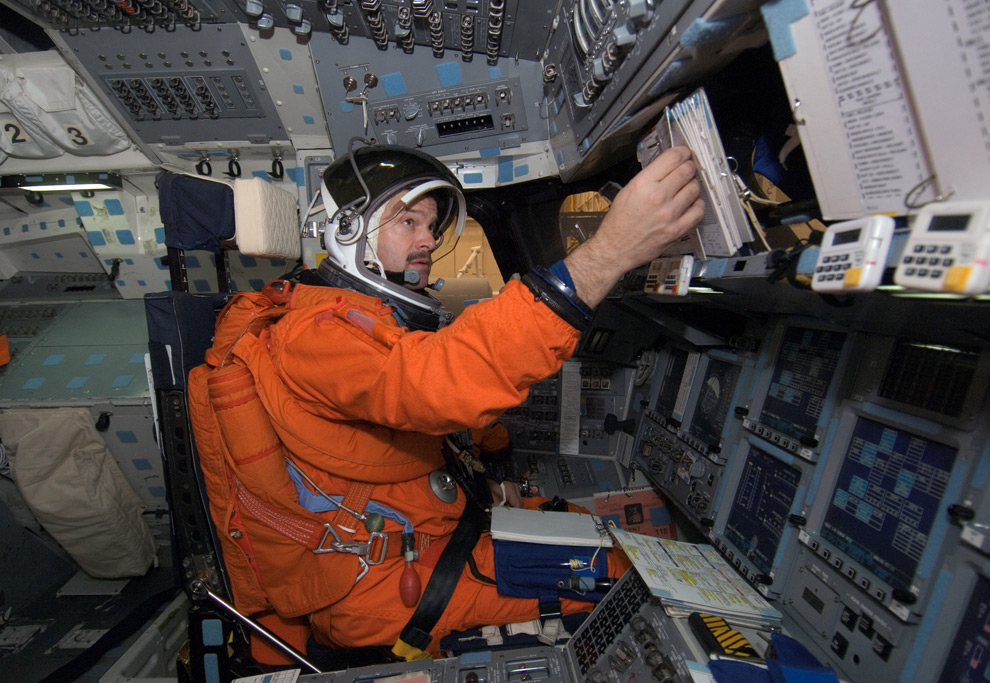 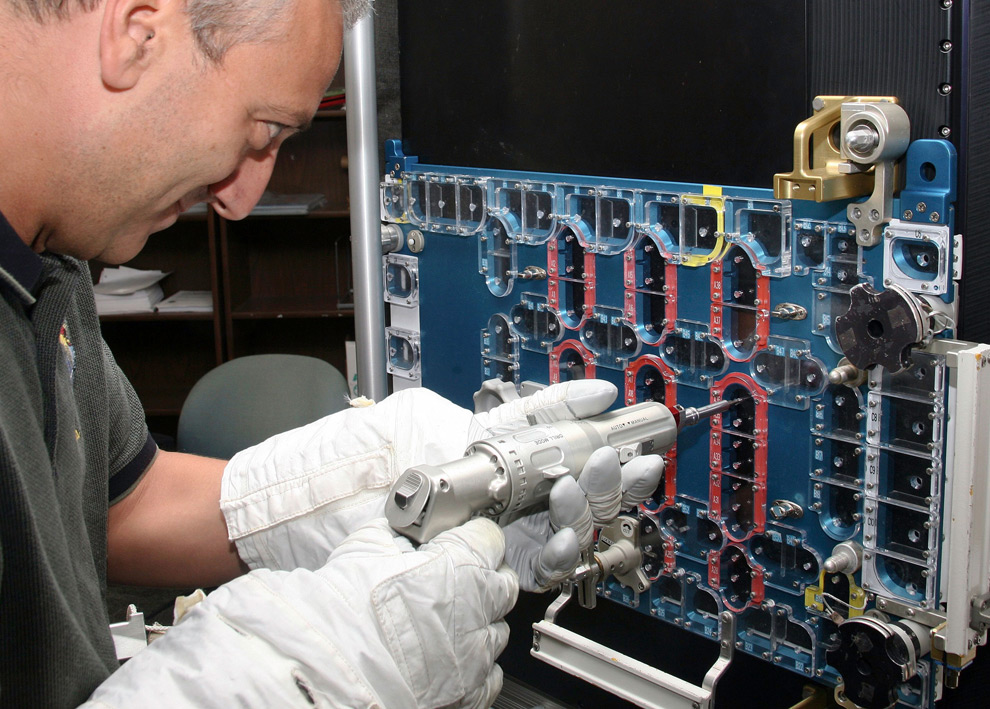 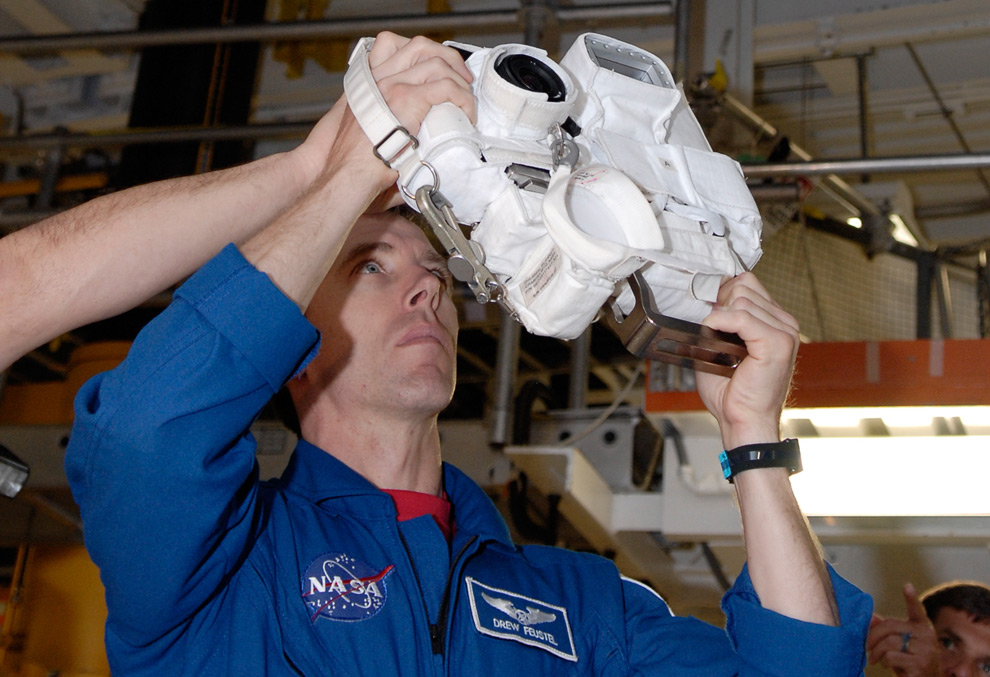 13
In the Orbiter Processing Facility at NASA's Kennedy Space Center, STS-125 Mission Specialist Andrew Feustel practices using one of the cameras for the mission. The crew is at Kennedy for a crew equipment interface test, which provides hands-on experience with hardware and equipment on the mission. Photo taken July 11, 2008 (NASA/Kim Shiflett) # 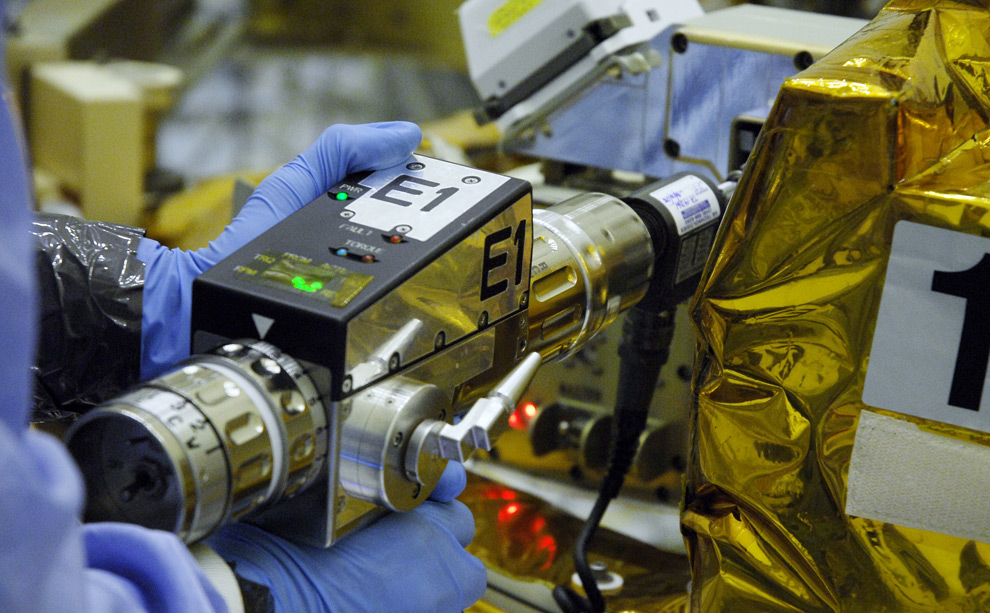 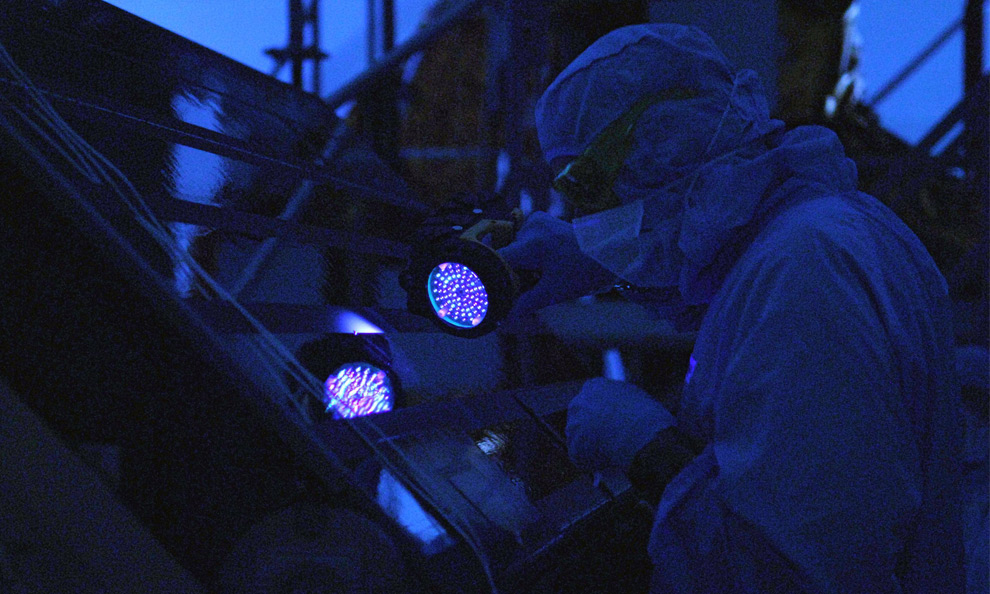 16
In the Orbiter Processing Facility at NASA's Kennedy Space Center, STS-125 Pilot Gregory C. Johnson examines the cockpit window on space shuttle Atlantis, checking for sharp edges on July 11th, 2008. The inspection is part of the crew equipment interface test, which provides hands-on experience with hardware and equipment for the mission. (NASA/Kim Shiflett) # 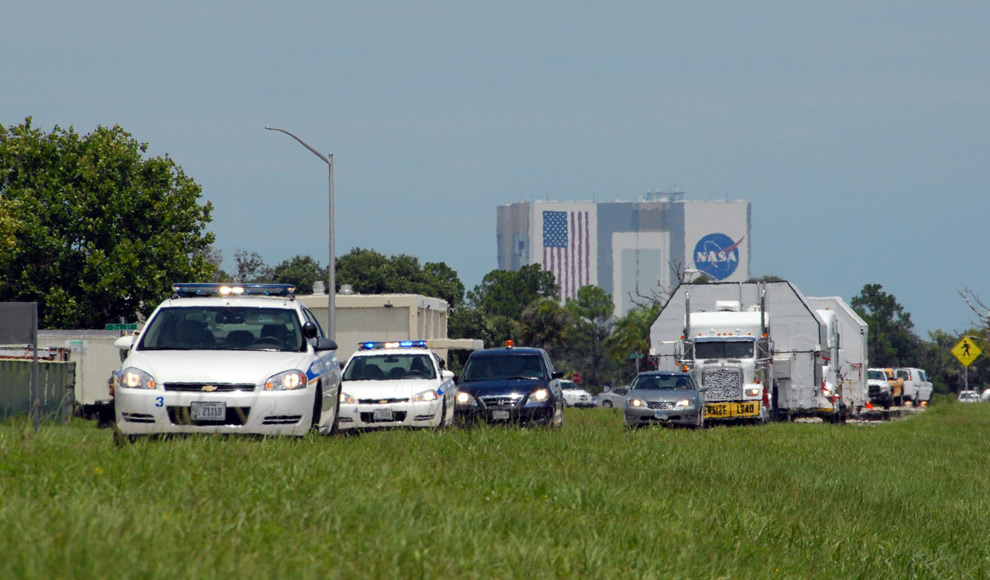 17
Under escort, the first major flight hardware for space shuttle Atlantis' STS-125 mission to NASA's Hubble Space Telescope arrives at NASA's Kennedy Space Center on July 17, 2008. The payload carriers will be prepared for the integration of telescope science instruments, both internal and external replacement components, as well as the flight support equipment to be used by the astronauts during the servicing mission. (NASA/Jack Pfaller) # 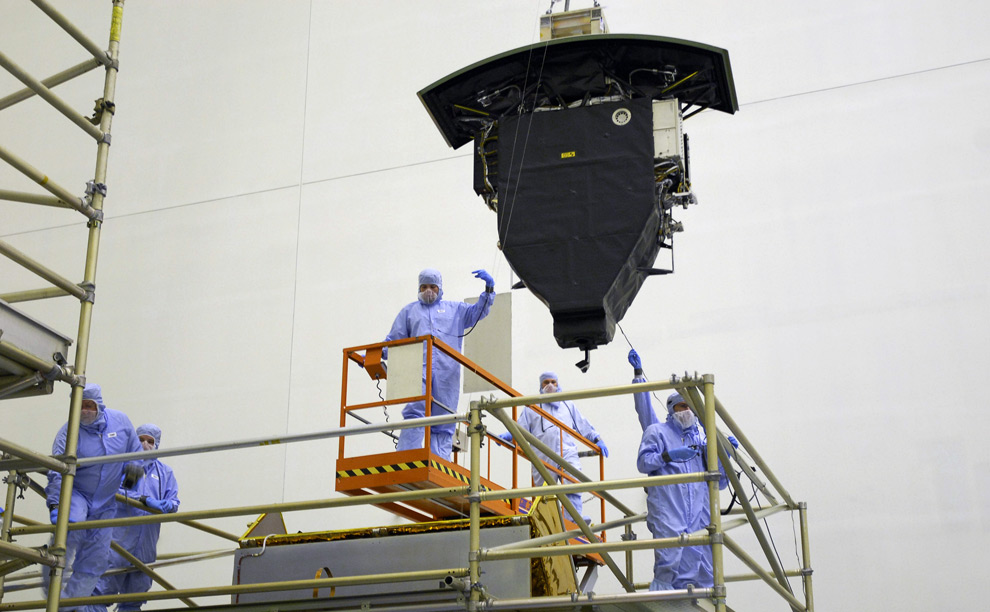 18
In the Payload Hazardous Servicing Facility at NASA's Kennedy Space Center, the Wide Field Camera 3, or WFC3, is moved toward the Super Lightweight Interchangeable Carrier. As Hubble enters the last stage of its life, WFC3 will be Hubble's next evolutionary step, allowing Hubble to peer ever further into the mysteries of the cosmos, and will study a diverse range of objects and phenomena, from young and extremely distant galaxies, to much more nearby stellar systems, to objects within our very own solar system. WFC3 will take the place of Wide Field Planetary Camera 2, which astronauts will bring back to Earth aboard the shuttle Atlantis. (NASA/Amanda Diller) # 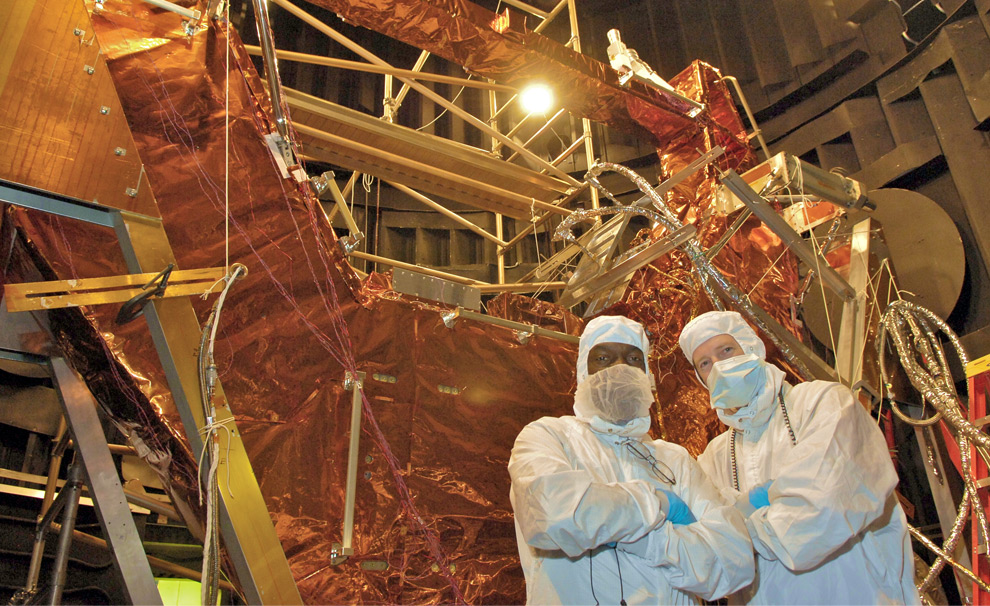 19
The Multi-Use Logistics Equipment (MULE) Shuttle carrier is readied for flight on STS 125 by technicians in a large cleanroom at the Goddard Spaceflight Center. The MULE, which will be located in the back of Atlantis' cargo bay, will carry the Relative Navigation System, Hubble's New Outer Blanket Layers, or NOBLs, and a variety of contingency tools and crew aids. (NASA/Goddard Spaceflight Center) # 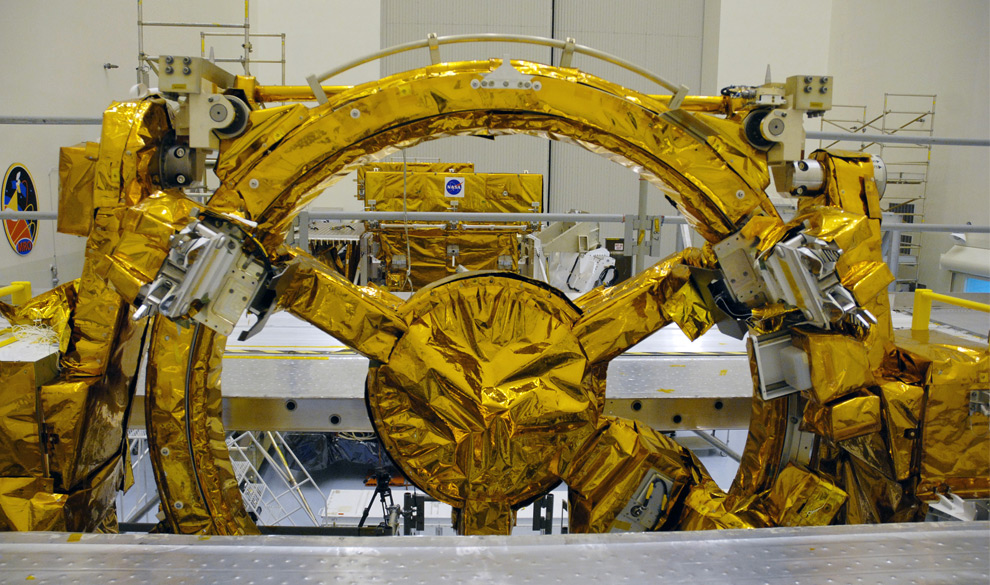 20
In the high bay of the Payload Hazardous Servicing Facility at NASA's Kennedy Space Center, three of four carriers supporting the space shuttle Atlantis STS-125 Hubble Space Telescope servicing mission have been unwrapped for final launch processing. The Super Lightweight Interchangeable Carrier and the Orbital Replacement Unit Carrier can be seen through the distinctive soft capture mechanism, or SCM, of the Flight Support System. The SCM will be permanently attached to Hubble's aft shroud by spacewalking astronauts and will provide a rendezvous and docking target that can be easily seen and recognized by a docking vehicle. (NASA/Jack Pfaller) # 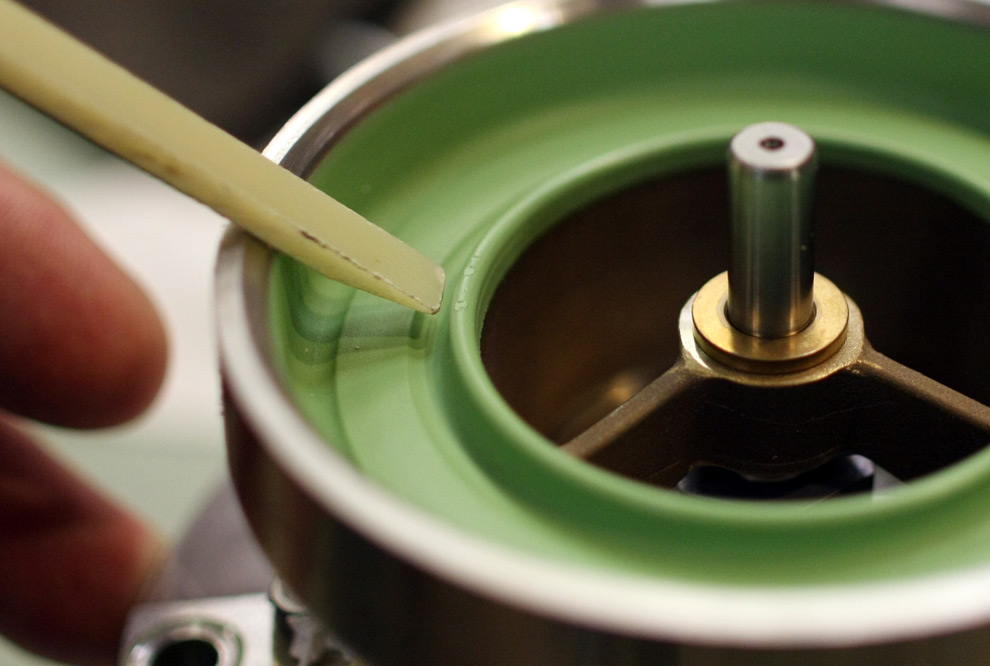 21
Preparation and inspections need to be meticulous. Here is a close up view of a valve removed from Atlantis' external tank inside the Vehicle Assembly Building at NASA's Kennedy Space Center. Technicians removed the valve after small dings (center, near tip of tool) were found on the sealing surface of the quick disconnect system that handles liquid-hydrogen fuel for the shuttle's three main engines. (NASA/Dimitri Gerondidakis) # 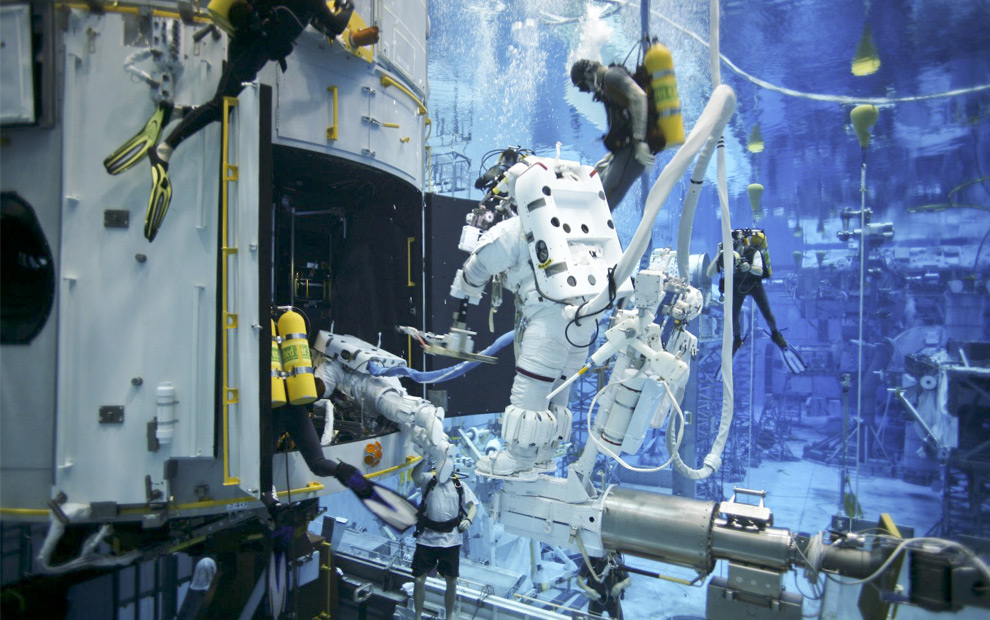 22
Servicing Mission 4 astronauts practice on a Hubble model underwater at the Neutral Buoyancy Lab in Houston under the watchful eyes of NASA engineers and safety divers. (NASA) # 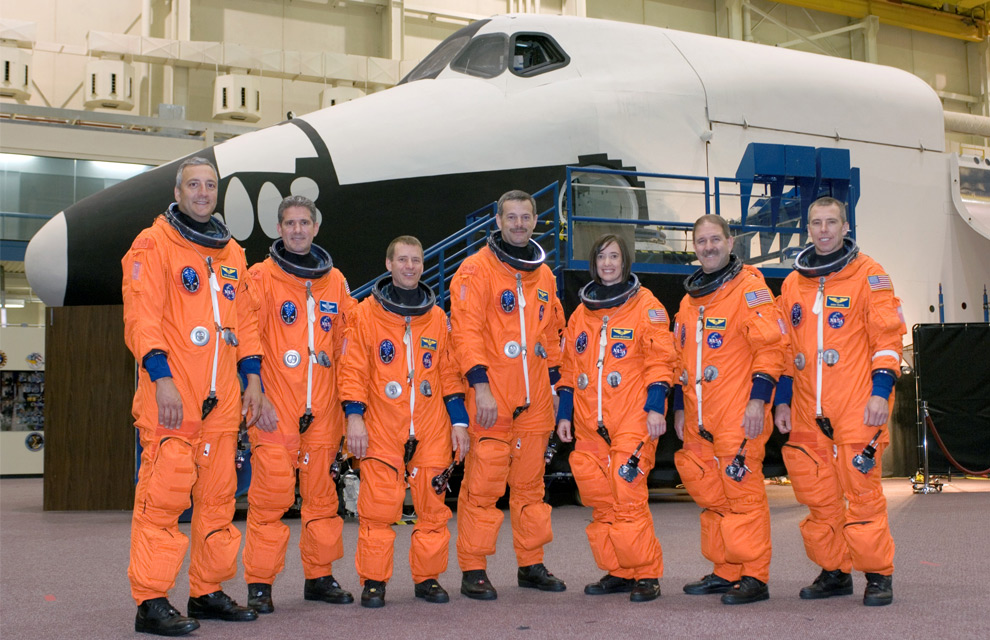