On August 1st, 2008, starting in the morning, over northern Canada, observers on Earth could watch this years only total solar eclipse. While a partial eclipse could be seen over a larger area, the shadow of totality passed over Greenland, Norway and Russia, then evaporated into the night sky over China. Here you will find a collection of photographs of this eclipse, and people here on Earth, taking it all in. (18 photos total) (Also, for more Boston Globe Photography - be sure to check out our new Globe Photography page) 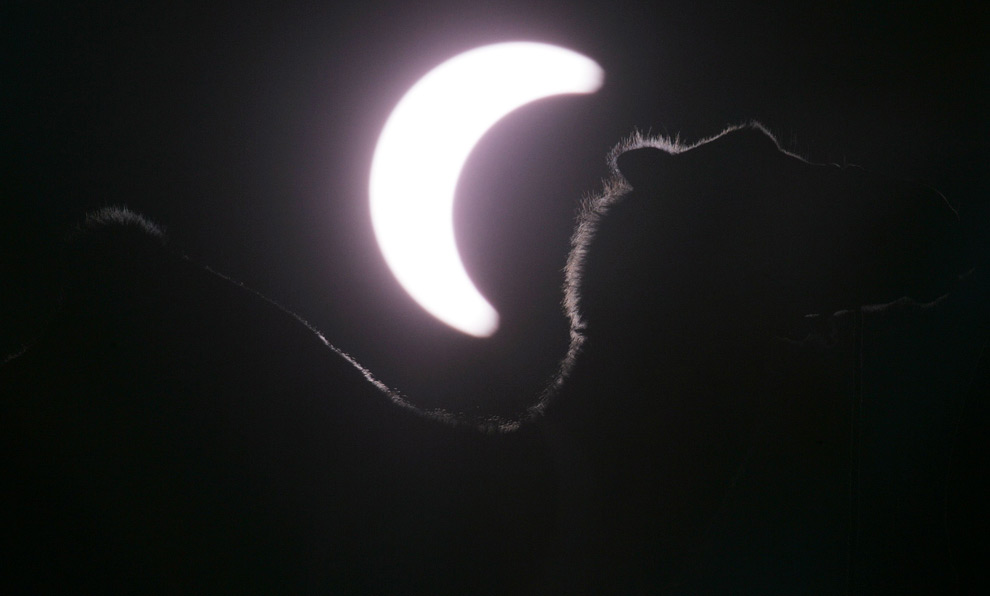 A camel is silhouetted against the sun partly blocked by the moon during a solar eclipse in Gaotai, Gansu province August 1, 2008. (REUTERS/Aly Song) 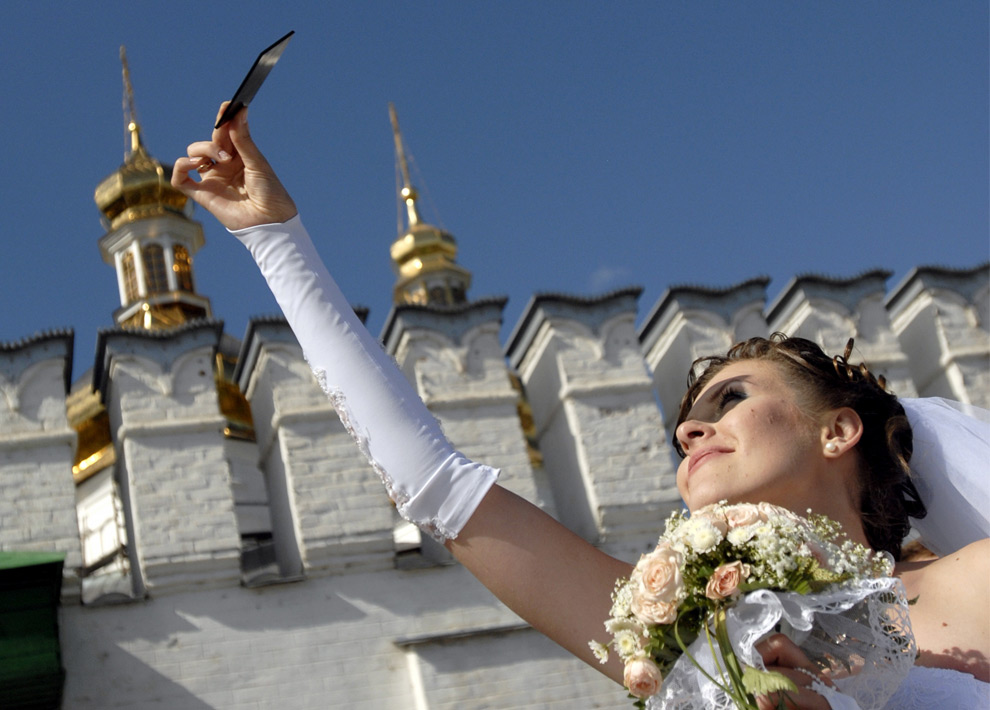 A bride watches the total solar eclipse through smoky glass in the western Siberian city of Tyumen on Friday, Aug. 1, 2008, with Troitsky (Trinity) Orthodox Monastery in the background. An enormous swathe of western Siberian was submerged in darkness Friday afternoon as the moon completely blocked out the sun. (AP Photo/Marat Gubaidullin) 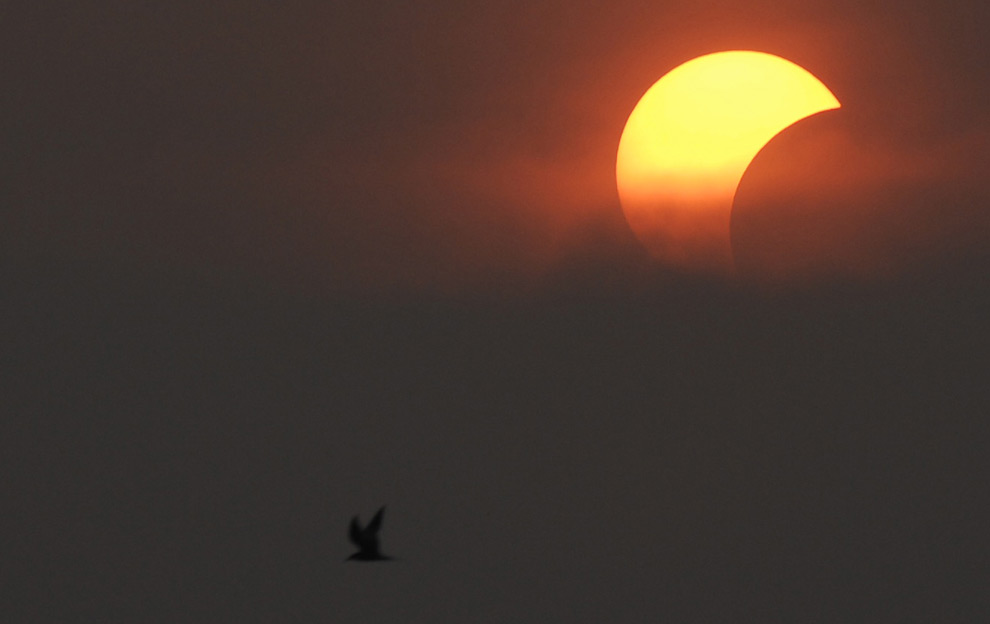 A bird flies in the sky as a solar eclipse is seen in Xiangfan in central China's Hubei province Friday Aug. 1, 2008. Millions of Chinese along the ancient Silk Road gathered Friday to gaze at a total solar eclipse, an event traditionally fraught with superstitious meaning coming one week before the start of the Beijing Olympics. (AP Photo) 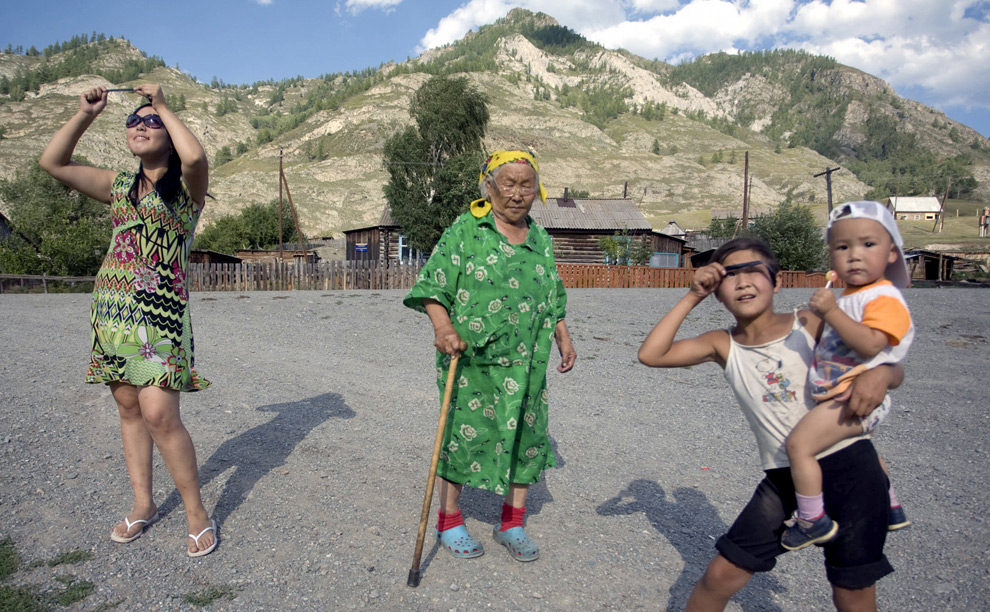 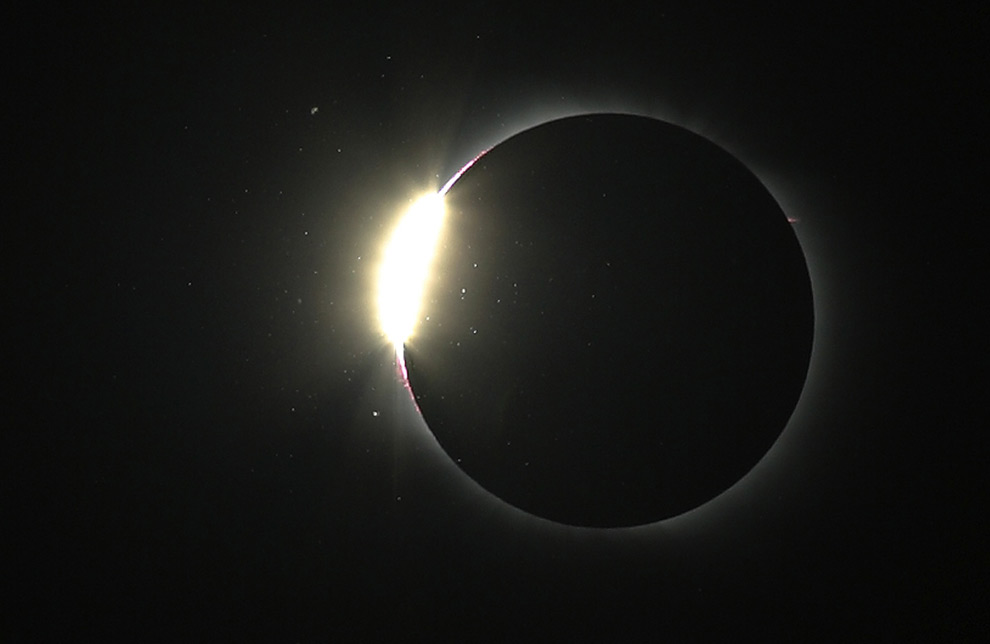 A diamond ring effect is seen during a solar eclipse above River Ob in the Siberian city of Novosibirsk, August 1, 2008. A solar prominence can be seen erupting on the right side. Thousands flocked to Novosibirsk to observe day turned into night. They watched as an eerie silence descended on the Siberian city and gusts of unusually strong wind tore through the crowd. Birds stopped chirping and the temperature suddenly dropped. (REUTERS/Ilya Naymushin) 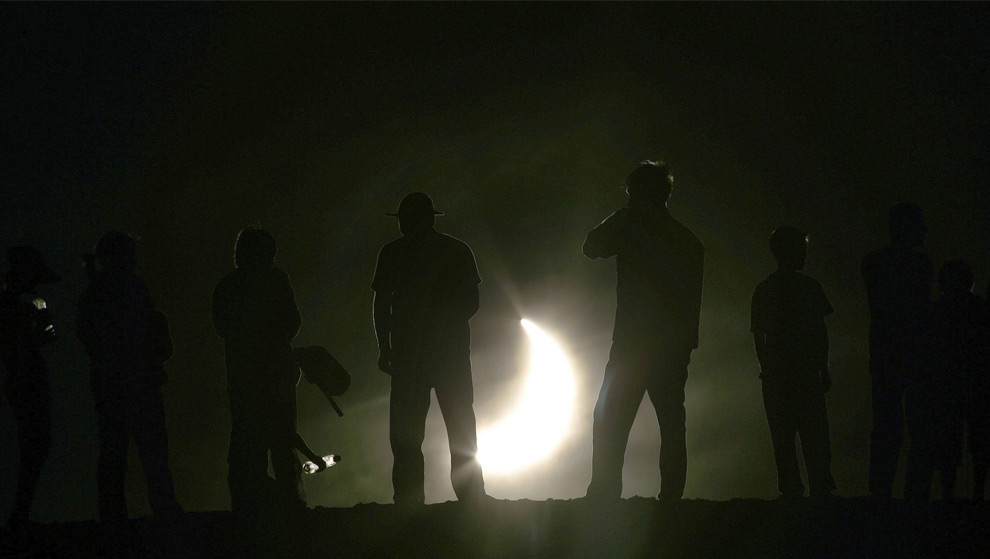 People watch the sun being blocked by the moon during a solar eclipse in Gaotai, Gansu province, China on August 1, 2008. (REUTERS/Aly Song) 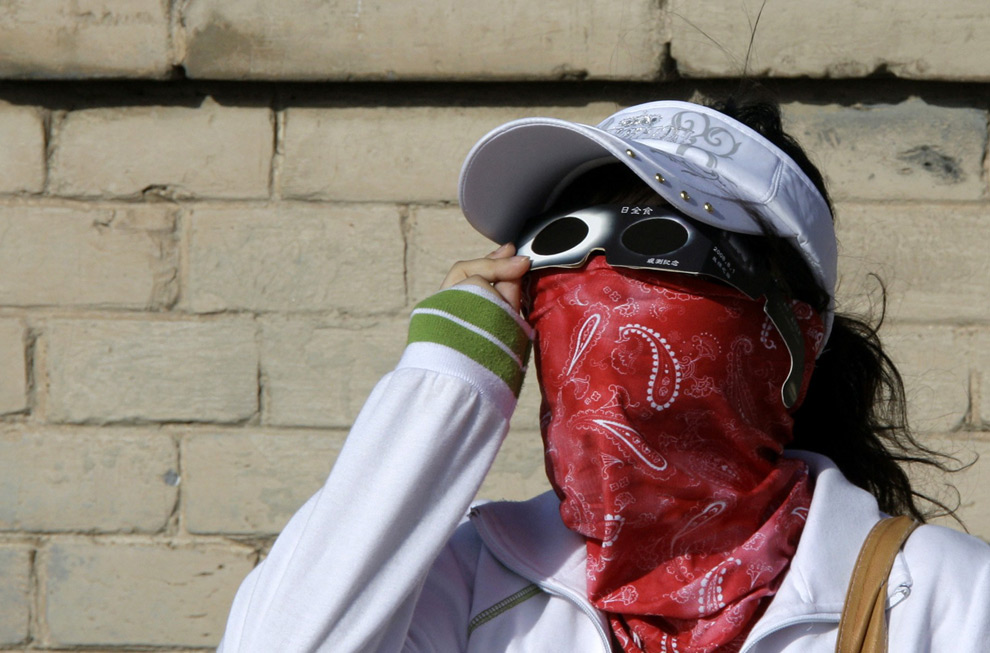 A woman uses "eclipse glasses" to watch the solar eclipse, which the Chinese word for is "Rishi" meaning "eaten sun", at the Jiayuguan Fort on the Great Wall of China in the town of Jiayuguan, Gansu province, August 1, 2008. (REUTERS/David Gray) 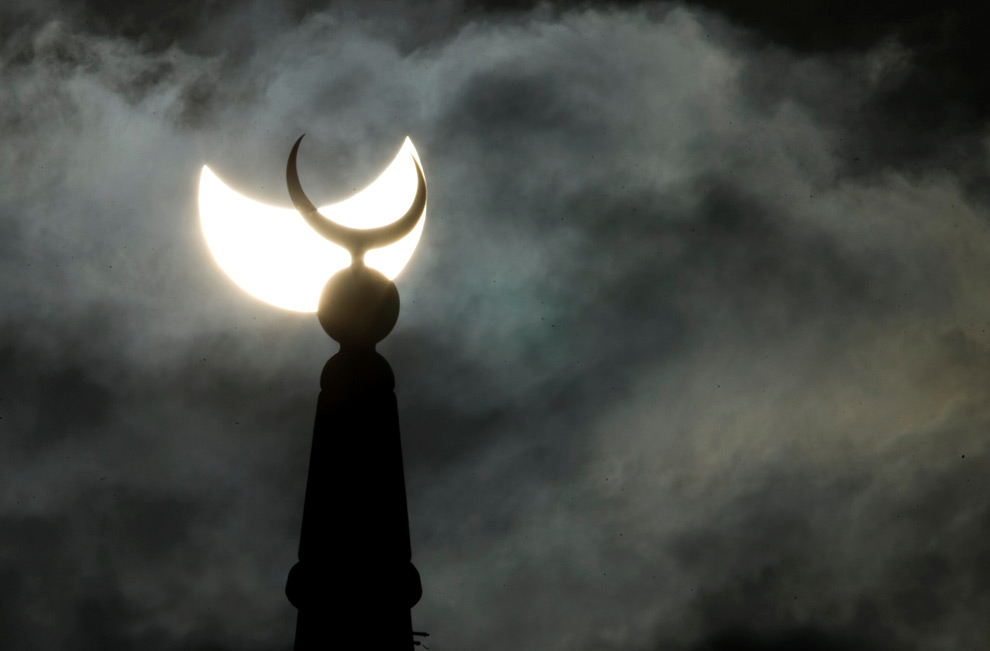 The partial solar eclipse is seen against a crescent of Islamabad's grand Faisal mosque in Pakistan on Aug 1, 2008. (AP Photo/B.K.Bangash) 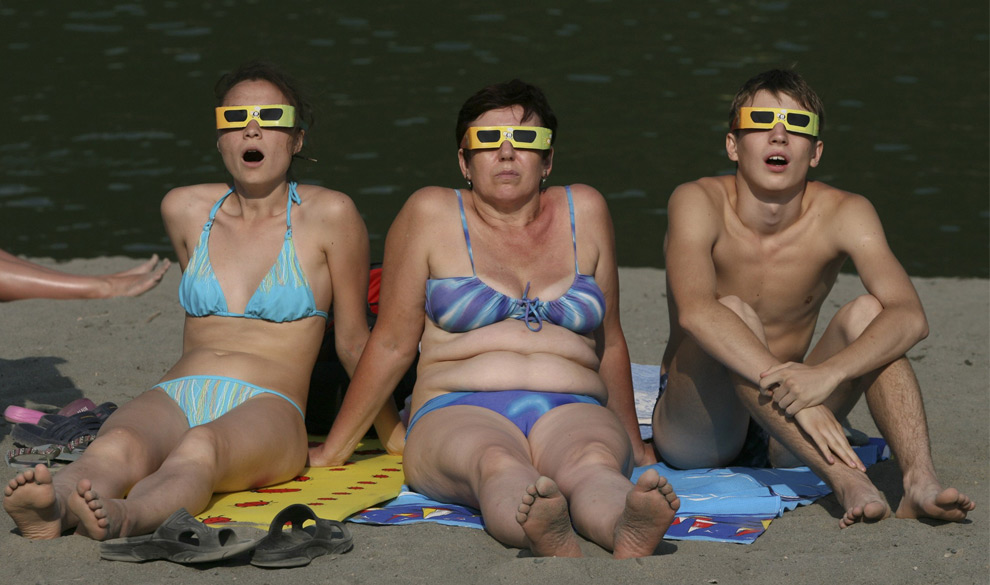 People watch an eclipse of the sun in the Altai region, some 300 km (186.4 miles) from Barnaul, Russia on August 1, 2008. A dark shadow swept across Russia on Friday as thousands of skywatchers from all over the world flocked to Siberia to see this years eclipse. (REUTERS/Andrei Kasprishin) 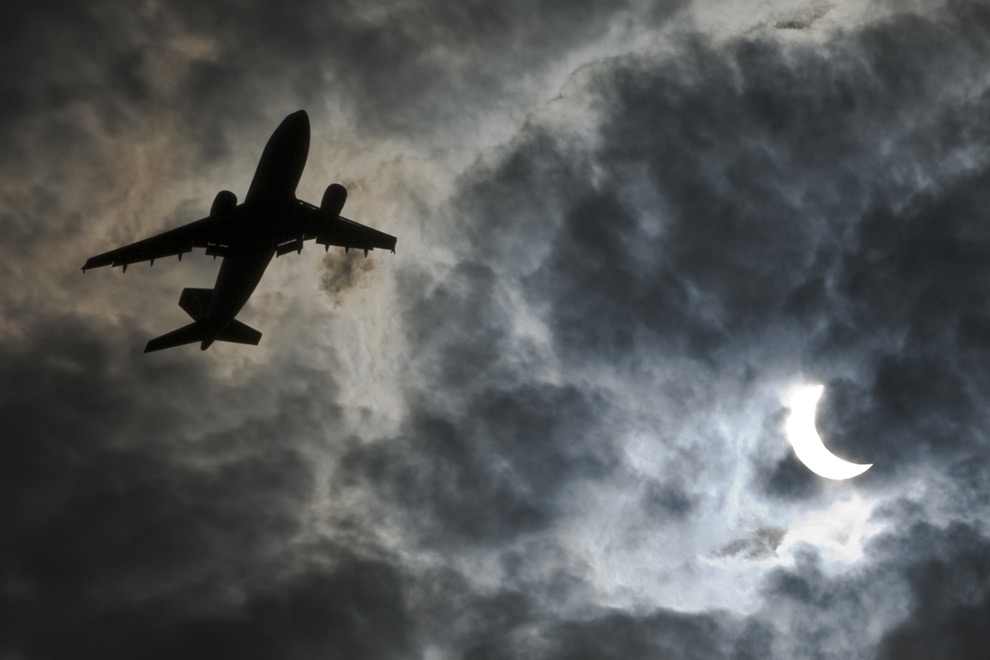 An airplane flies past during a partial solar eclipse in Almaty, Kazakhstan on August 1, 2008. (REUTERS/Zturgan Aldauyev) 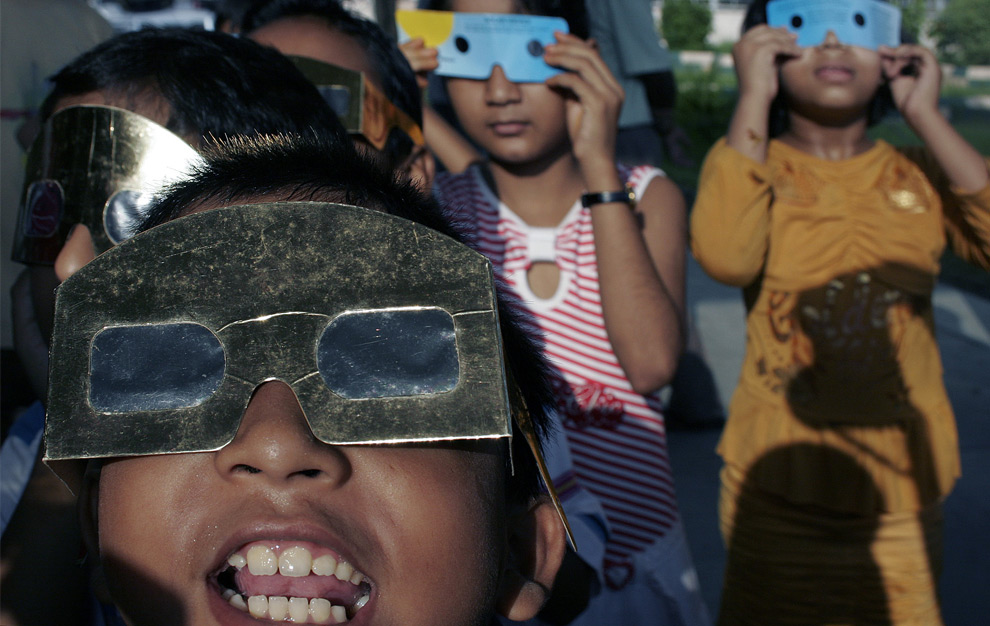 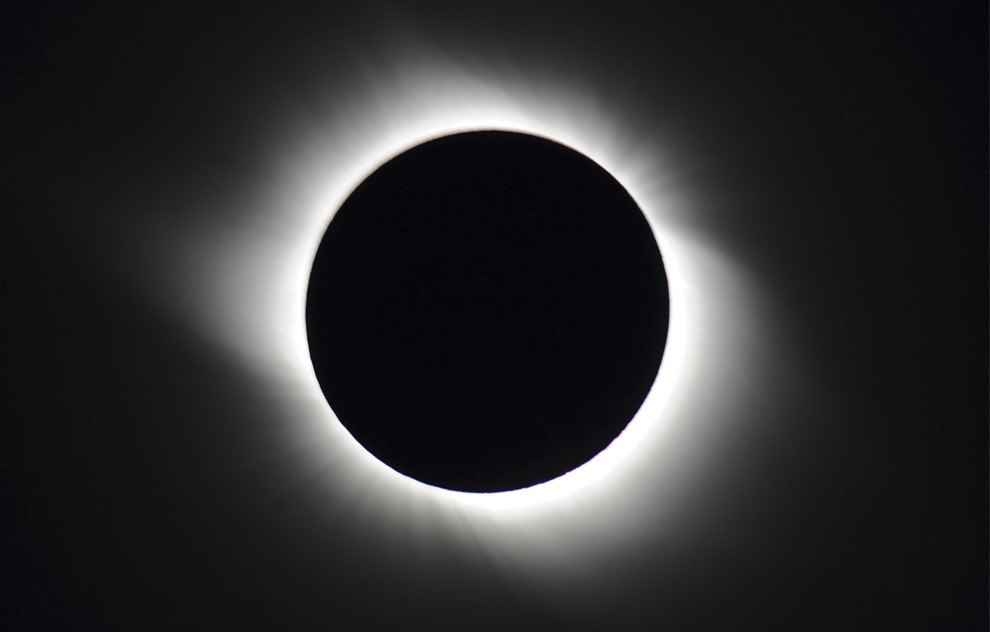 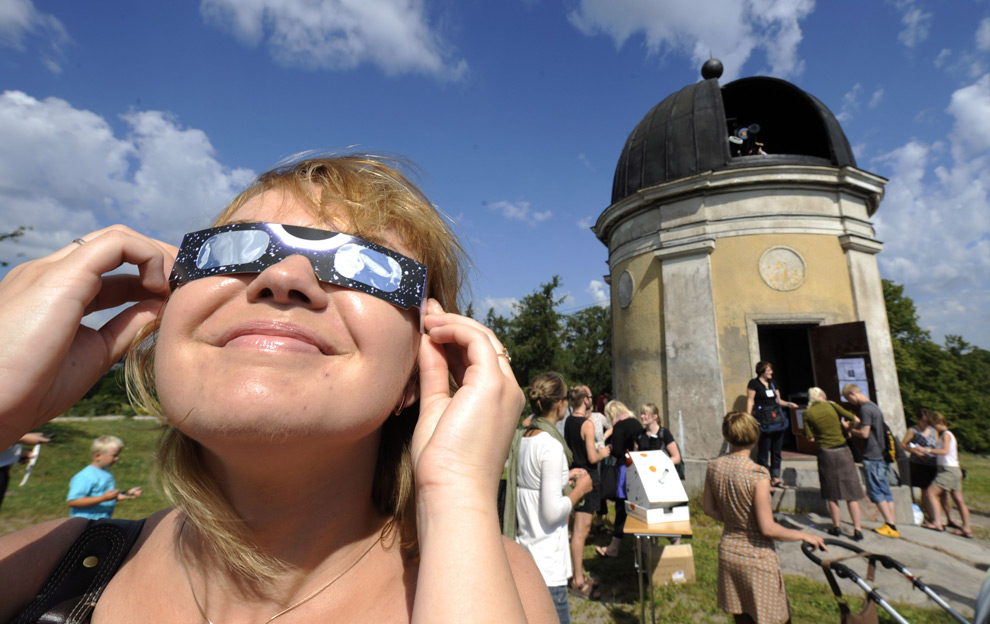 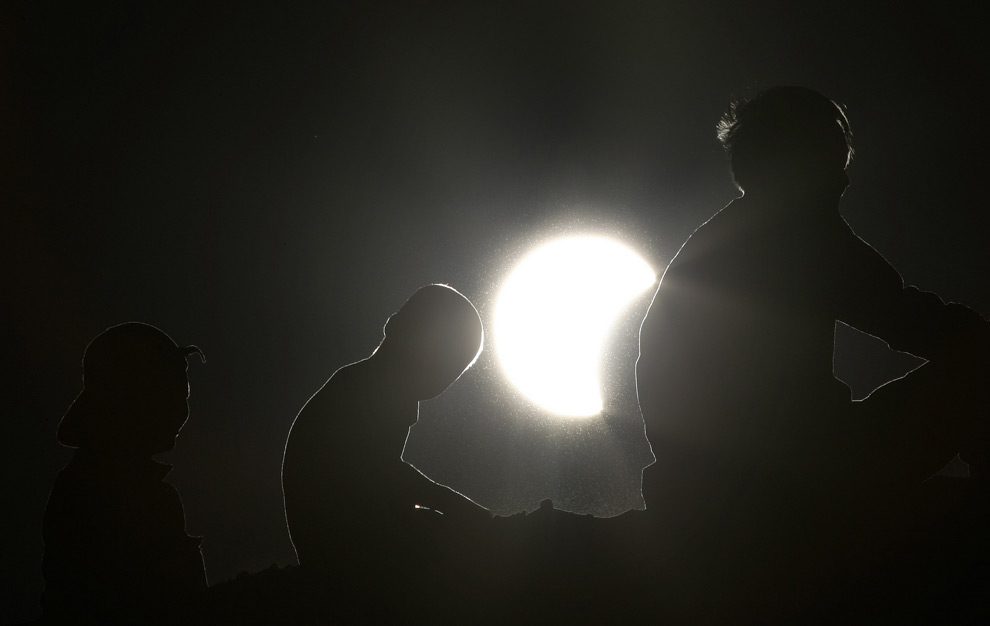 People sit, silhouetted as they watch the sun being blocked by the moon during a solar eclipse in Gaotai, Gansu province, China on August 1,2008. (REUTERS/Aly Song) 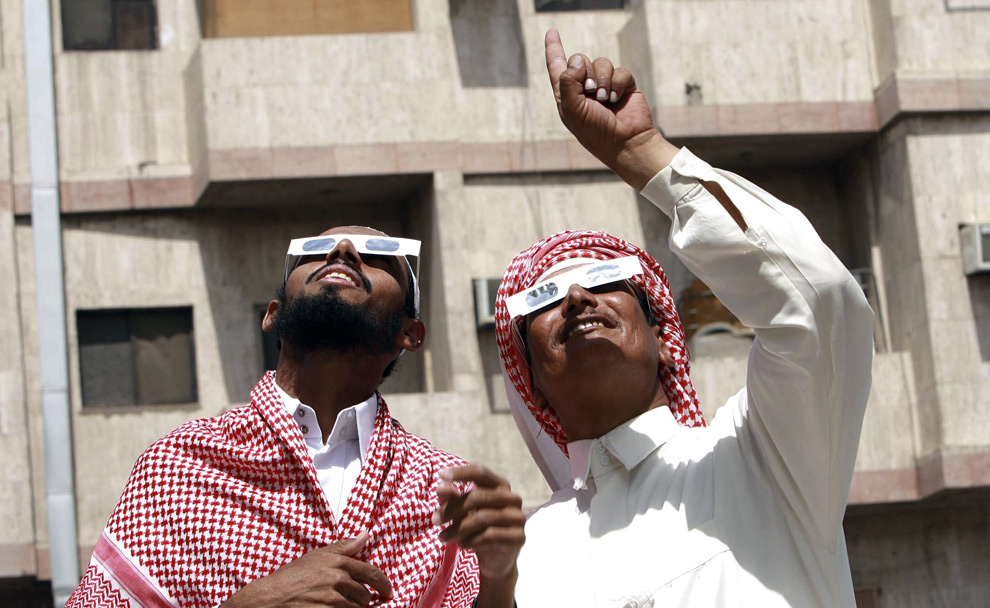 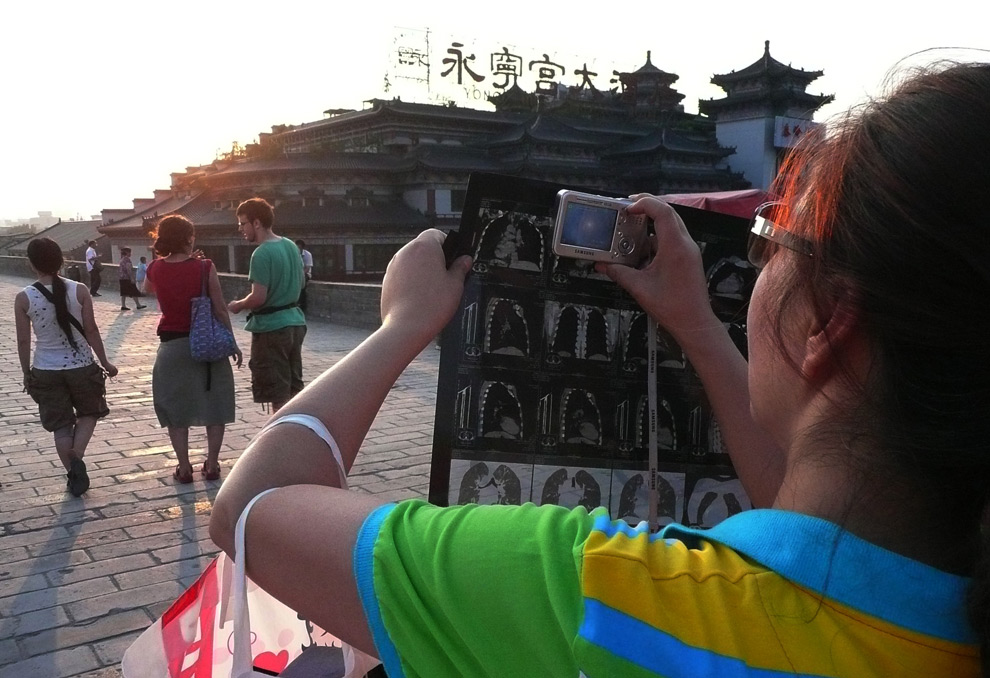 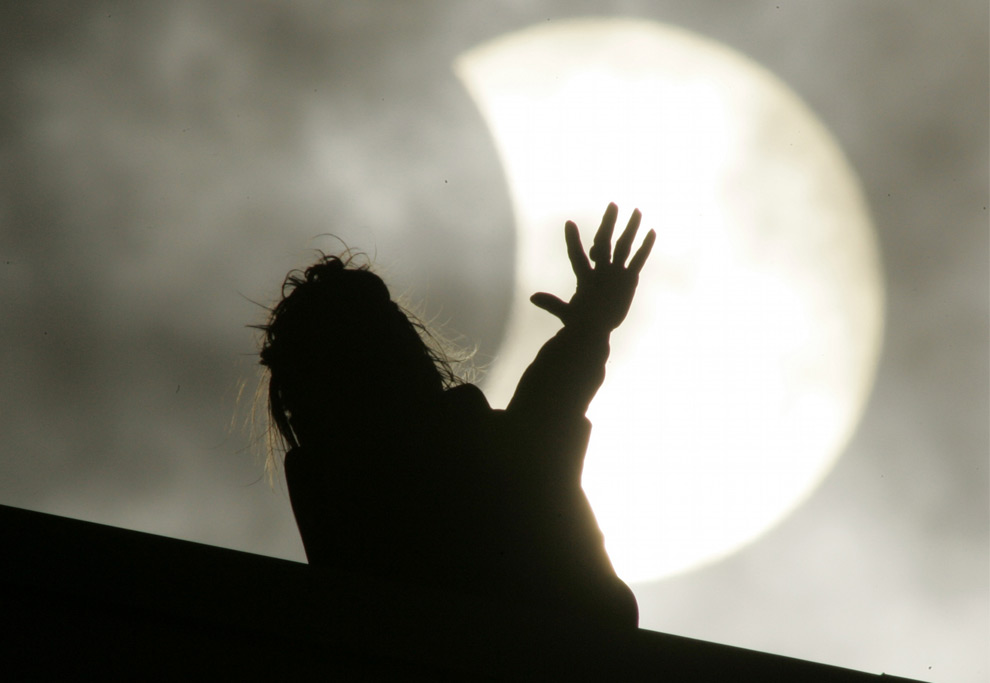 A woman reaches out while looking at the moon partly eclipsing the sun, in St.Petersburg, Russia, Friday, Aug. 1, 2008. (AP Photo/Dmitry Lovetsky) A solar eclipse can be seen above the Jiayuguan Fort on the Great Wall of China in the town of Jiayuguan, Gansu Province, China on August 1, 2008. (REUTERS/David Gray)