Spectators at the fencing competition at the Olympics are often treated to some dramatic, emotional scenes - played out by passionate competitors dressed all in white, hi-tech gear, meeting inside a large darkened stadium. It also makes for some dramatic imagery, which I'll share with you here -- 16 scenes from recent women's fencing matches in Beijing. (16 photos total) 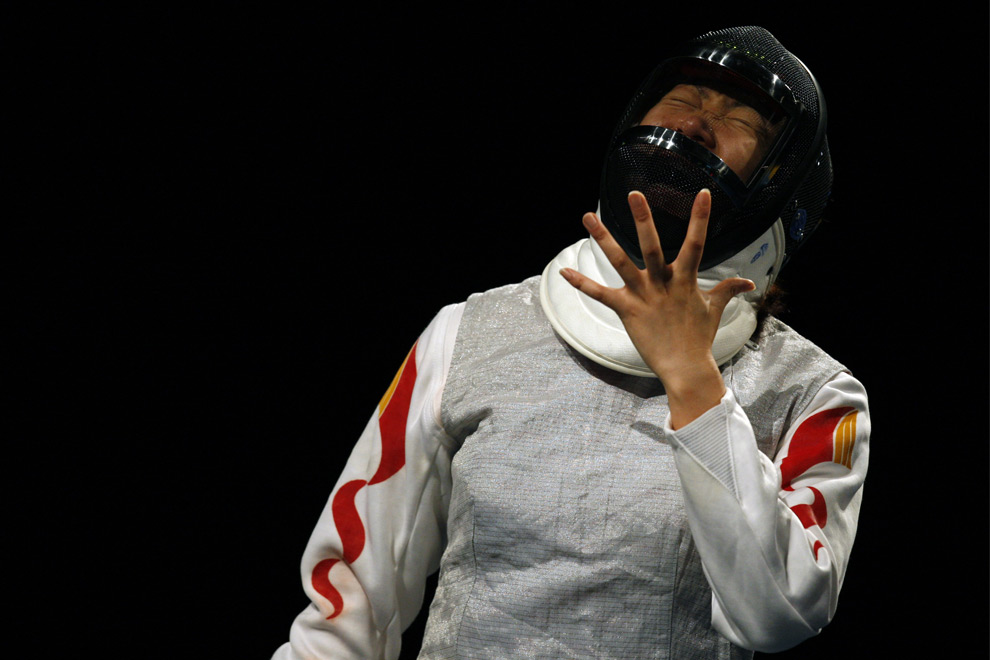 That multi-exposure says it all.

why bite the bronze medal?

Great photos. Can you use flash at an event like this?

Thanks for the cool pictures. Enjoy your vacation! :)

love this blog....keep on posting great photos...thank you so much.

There's no crying in Fencing!

Are they supposed to be biting, or posing seductively? Someone didn't tell Granbassi (on the right.)

wow, those are some great shots, thanks for posting them in such high res, the detail is incredible. The long exposure is great.

the caption on the 12th picture is wrong. The woman on the left is wearing a korean uniform, so it can not be Zhang Lei of China. I'm assuming it is probably Nam Hyunhee?

saw some of this live. thought it was going to be lame. turned out to be incredibly intense!! super good fencing, super good pics!!

I love this site. Massive range of emotions in those pictures.

The Big Picture is now copied by the WSJ. Compliment indeed...

Aw. It's heartbreaking about Azza Besbes (the lady on the ground crying).

Also, the two people in the last picture have nice teeth.

Cool pictures, Margherita Granbassi sure is a cutie

sorry those fencing masks remind me of daft punk

What exactly does it say?

I'm guessing the 6th photo is a long exposure with multiple flash bursts...?
The second from the last photo is a near-iconic sports photo. An athlete, crumbled in defeat, with the scoreboard beneath her showing just how close the margin of victory was. And the image on the screen below the scoreboard, is that the winner of the match taking a bow?

There's some remarkable technology being used in this old sport. With all the wires and those electronics-equipped masks and suits, these competitors do look a bit robotic. But with the fluid movements and poses that only we humans possess. For now.

On a side note, yes Granbassi is not too hard on the eyes at all. Neither is our own sabreuse Zagunis.

keep up the good stuff.

Cool pictures, Margherita Granbassi sure is a cutie

Someone should write about the technology of the fencing gear they wear. I would read about it.

You bite the bronze medal to show your perfect teeth. Duh. :)

I'd like to know where the epee shots are.

I hope everyone watched these on the website. Fantastic stuff, great photos!

Sure hope those medals don't have any lead content....

"why bite the bronze?" - david

Being the 3rd best Olympian is a big deal. Give the gal some credit. It is really sad that in America, the saying the "no-one remembers who came second (or third)" is alive and well.

Such an interesting combination of new technologies blended with old-school fencing. It's like retro-science fiction.

Sure hope those medals don't have any lead content....

Proud to be italian! http://davidlatache.com

these pictures are brill, it's a shame that fencing is rather dreary to watch. nice one

I'm not a sabre fencer (Epee baby!) but I did enjoy that bout between Zagunis and Jacobson! These photos are just beautiful. Oh and no crying in fencing you say? Well tell that the the saberist who was sobing all over the piste. :P

straight out of a StarWars film

You bite the medal, to put YOUR mark on it. The individual medal will endure, even after you are dead and buried. Hopefully, your mark, and your efforts, will be remembered.

People bite the gold medal for fun, because in the past that was a good way to check if a gold coin is really made of gold since gold is a "soft" metal, it would carve the teeth markings. Bronze, not so much. That is why david asked why bite the bronze medal.

I heard all the medals are MADE IN CHINA! lol

Oh, yes! Have a nice and relaxing holiday

I had the opportunity of taking up this sport in San Francisco over 60 years ago but had too much on my plate at the time. Wonder if it's too late to start now? Question: Does anyone know whatever happened to Emily and Carl Romaine, the photographer/fencers from the "city" where Tony Bennett left his heart?

fantasec love it whant it

thank you
nam huynhee is great!!

hello
please send me picture
thanks

i love fencing. good pictures. im writing about the last 5 female fencers to win the olympics!k

The purpose of this site is the furtherance of High School Fencing in the United States. Coaches and High School Administrators are invited to post results and commentary. Fencers and Parents are invited post commentary, not results. We have received positive feedback from several college coaches saying they will be checking this blog.

Commentary and/or posts are to be well intentioned and respectful. This is not a place to cause pain or grief, but rather give national prominence to our athletes and sport.

We at Proprintwear are proud of our association with the sport of fencing. Our owner was first a Fencer, secondly a National Referee and now a business owner committed to furthering the image of fencing.
Proprintwear

This is quite a bit late, but it looks like the fifth one from the bottom (the one where she's jumping) may be mis-captioned. That's the (South) Korean logo thing (can never remember what it's called) on her pant leg. The Chinese one is red and gold as shown in two other pictures in this series...

awesome u know I fence 2 n_n

Great pictures! Thank you!!
Valentina Vezzali, the queen of fencing!!!!!!!

Great pictures! Thank you!!
Valentina Vezzali, the queen of fencing!!!!!!!

These pictures are amazing! These are the best pictures of fencing I have seen so far, and all of the pictures are consistently good. The one with the blur was especially awesome!

beautiful pictures, but just wondering why so skewed...?

As an artist/photographer for Stars and Stripes during WW2 and a semi-finalist in the 1952 Olympics in Helsinki, plus a medalist in the Pan-
American Games of 1951 (all in Epee). I'm awed and very jealous of the
fantastic quality & sharpness by todays photographers. Wow!