Everybody In - Beating the Heat

The northern hemisphere is feeling the summer heat. A number of heat waves have already rolled across parts of southern Europe,the United States and Asia. From swimming pools to rivers, wave pools, ocean beaches and more, here are some recent photos of people around the world having fun, competing and keeping cool in the water. (22 photos total) 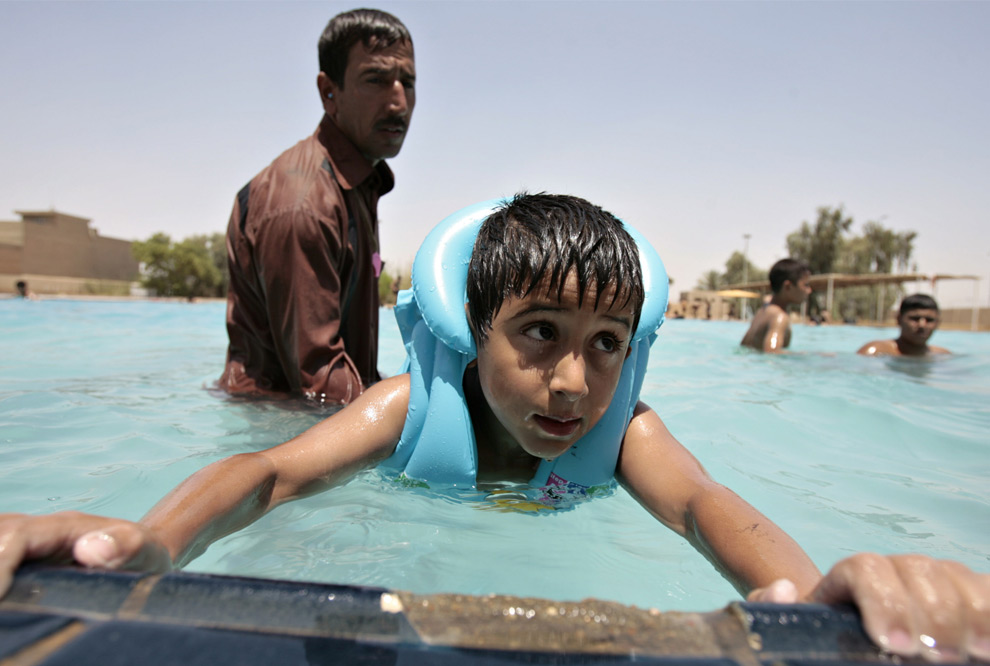 Swimming instructor Abbas Khalid (L), 35, assists an Iraqi child during a swimming class at a public pool in central Baghdad on July 15 2008. Abbas has been giving swimming lessons for Iraqi children for the past two summers, when school is out and kids take to the water to cool down. (AHMAD AL-RUBAYE/AFP/Getty Images) 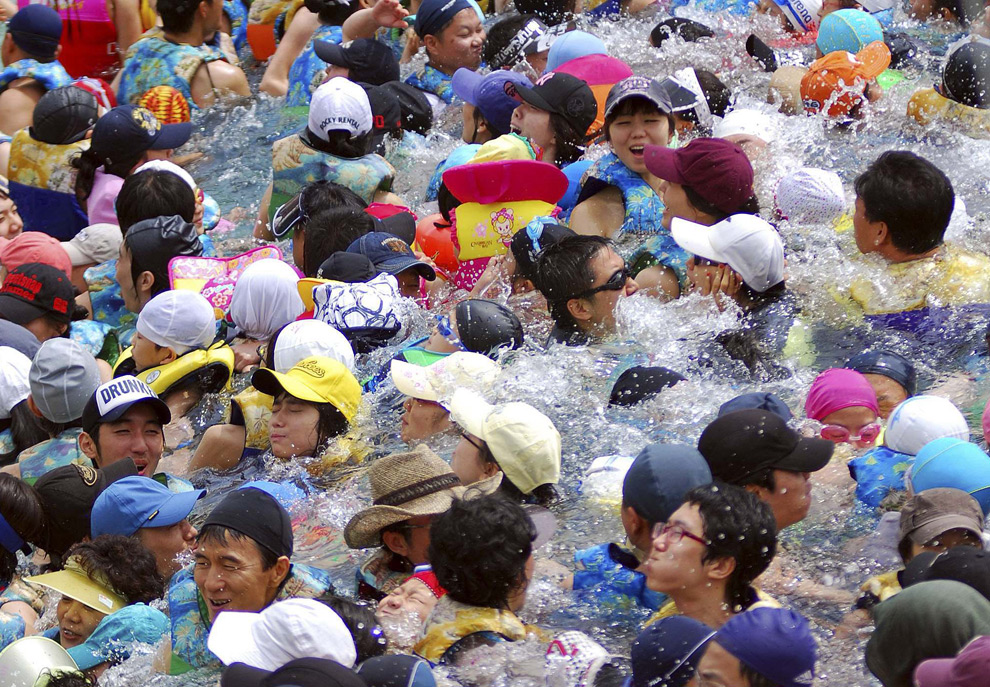 People swim to avoid the heat in a swimming pool in the Everland amusement park in Yongin, about 50 km (31 miles) south of Seoul, July 13, 2008. (REUTERS/Everland Amusement Park/Handout) 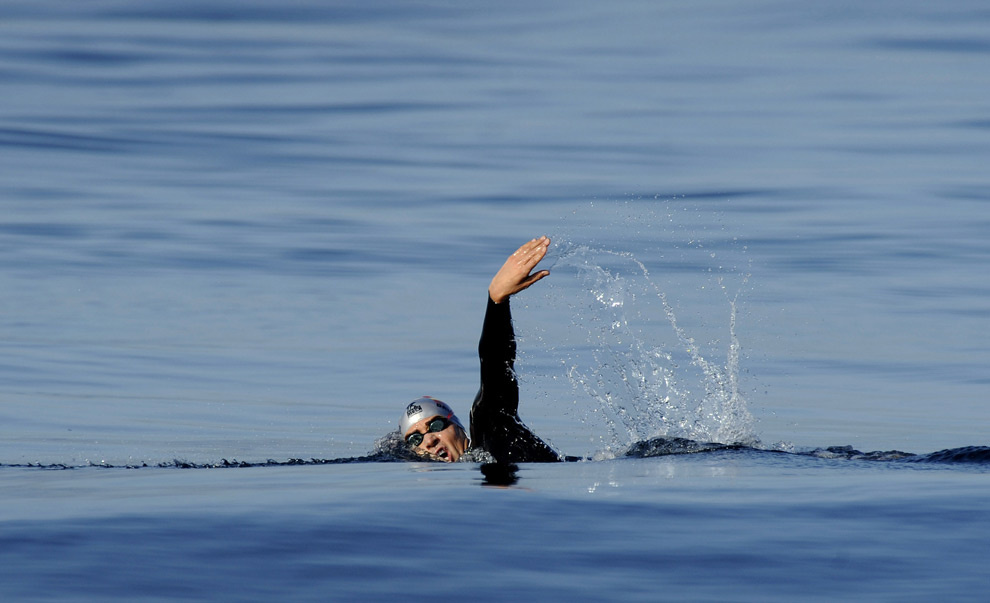 Spanish long distance swimmer David Meca attempts a world-record breaking swim from the beach at Tarifa, on the southern tip of Spain, on July 4, 2008. Meca is hoping to beat his own record in 2000 of crossing the straits of Gilbraltar three times non stop between Tarifa and the Spanish enclave in Morocco of Ceuta. (JOSE LUIS ROCA/AFP/Getty Images) 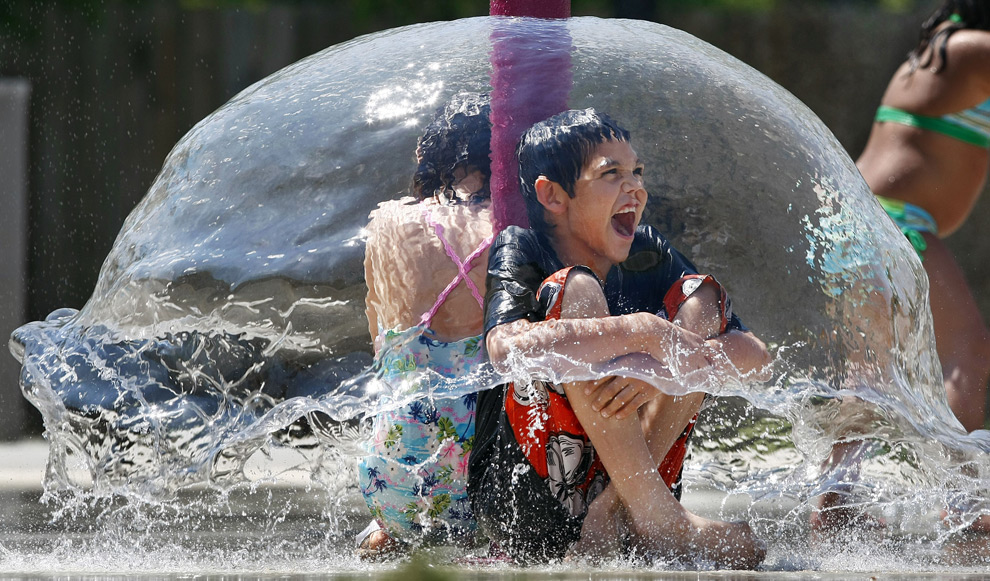 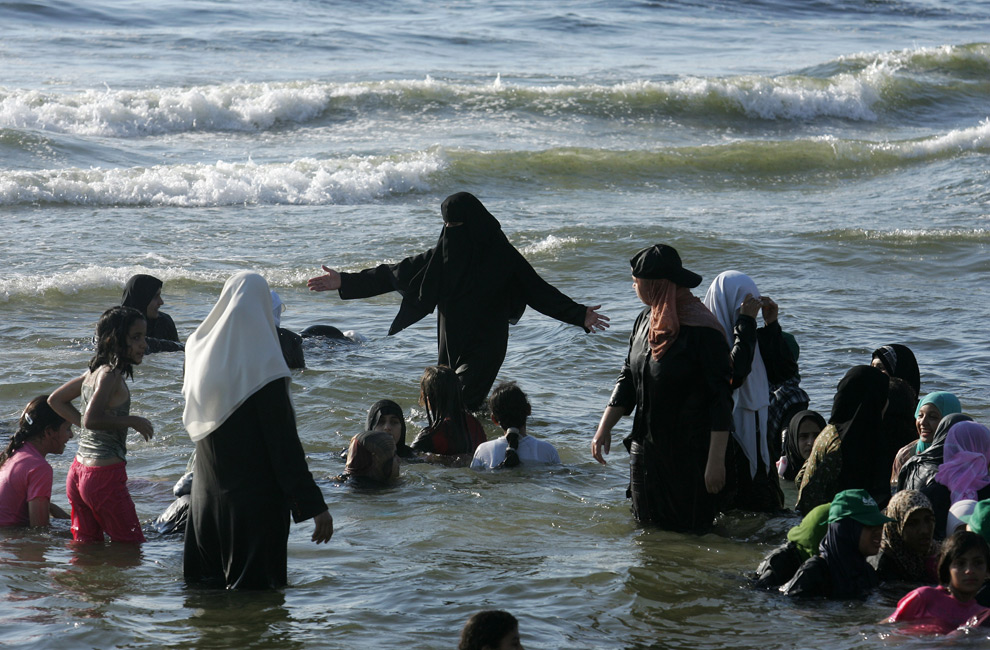 Palestinian women and girls spend some time at the beach June 20, 2008 in Rafah, southern Gaza Strip. Today is the second day of a truce between Palestinian militant groups and Israel, brokered by Egypt. (Abid Katib/Getty Images) 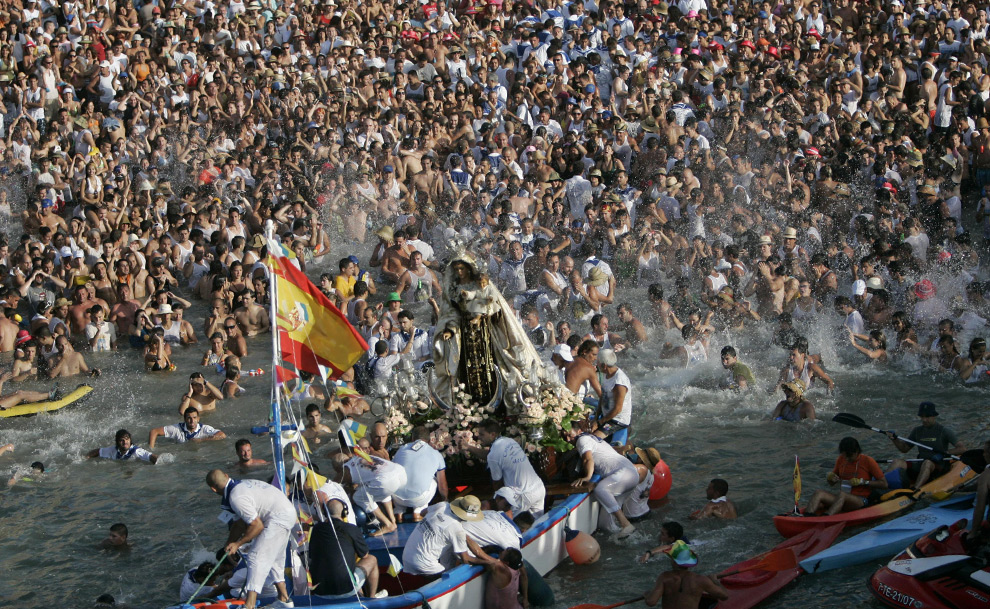 About 25,000 people attend on July 15, 2008, the boat procession of the Virgin of Carmen (Virgen del Carmen), the protector of fisherman, at Puerto de la Cruz on Spain's Canary island of Tenerife. (DESIREEE MARTIN/AFP/Getty Images) 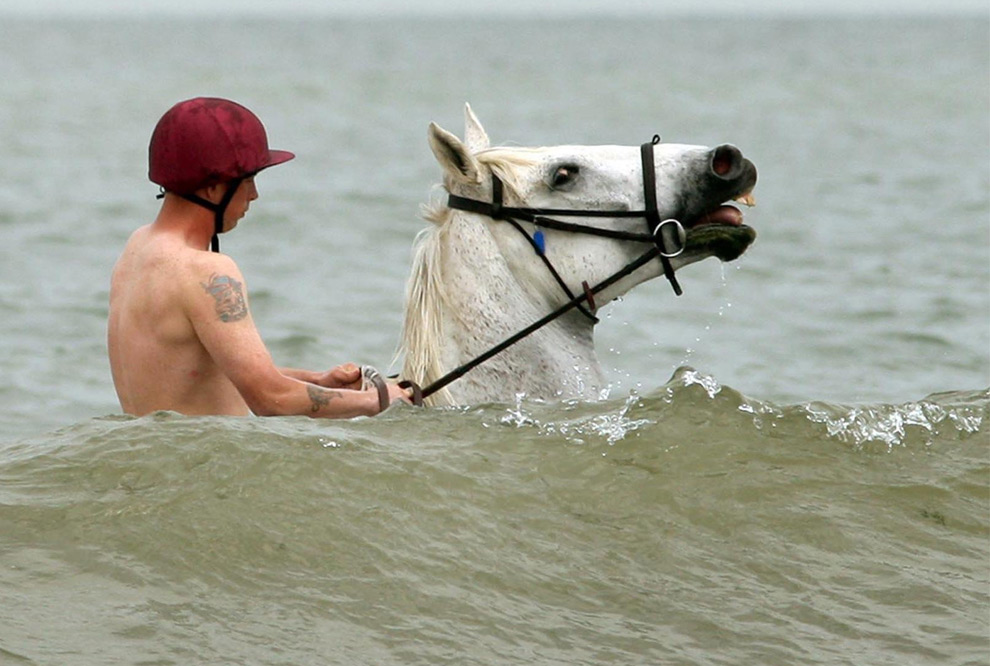 A serviceman and his horse from the Household Cavalry, the Life Guards regiment, swim in the sea along Holkham Beach, Holkham, eastern England, Tuesday July 22, 2008. Members of the Household Cavalry are currently stationed in the area during their three week summer training camp and a break from ceremonial duties in London. (AP Photo/PA, Chris Radburn) 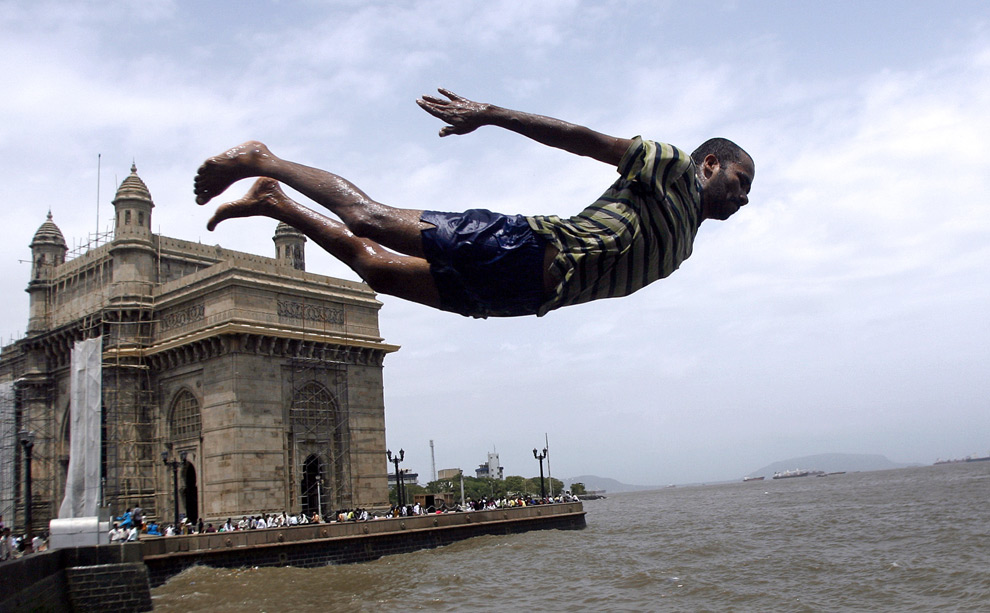 A man leaps into the waters of the Arabian Sea near the Gateway of India in Mumbai on July 5, 2008, as a high tide approaches the western Indian city. The monsoon season, which runs from June to September, accounts for about 80 percent of India's annual rainfall. (SAJJAD HUSSAIN/AFP/Getty Images) 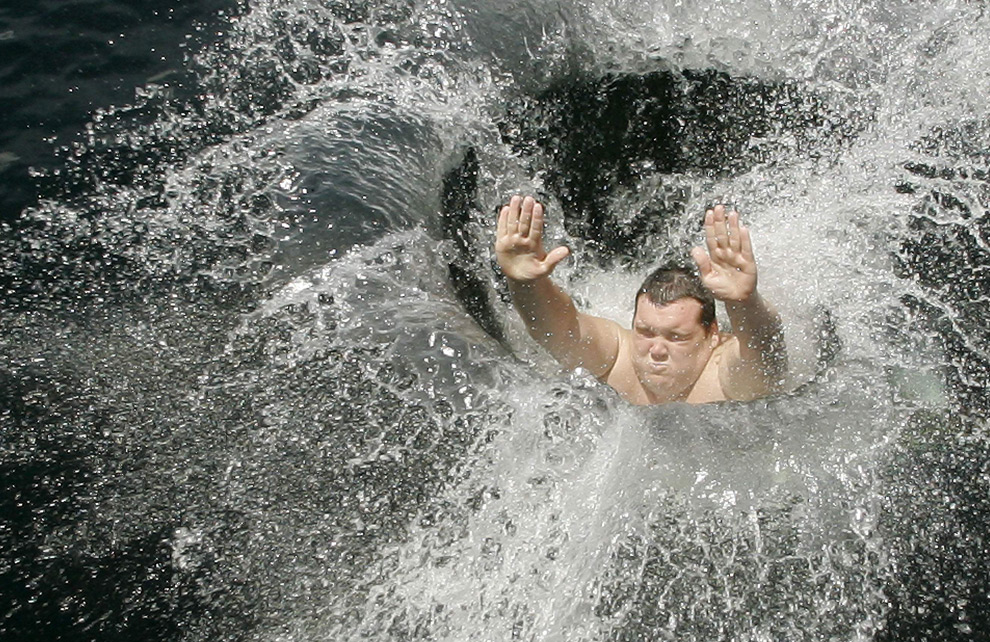 Anthony Chance, 23, a Florida State University student from Crestview, Fla., enjoys a plunge into the cool waters of Wakulla Springs, Thursday, July 10, 2008, in Wakulla, Fla. Chance said he was taking a break from school and the mid-ninties temperature with a visit to the Springs.(AP Photo/Phil Coale) 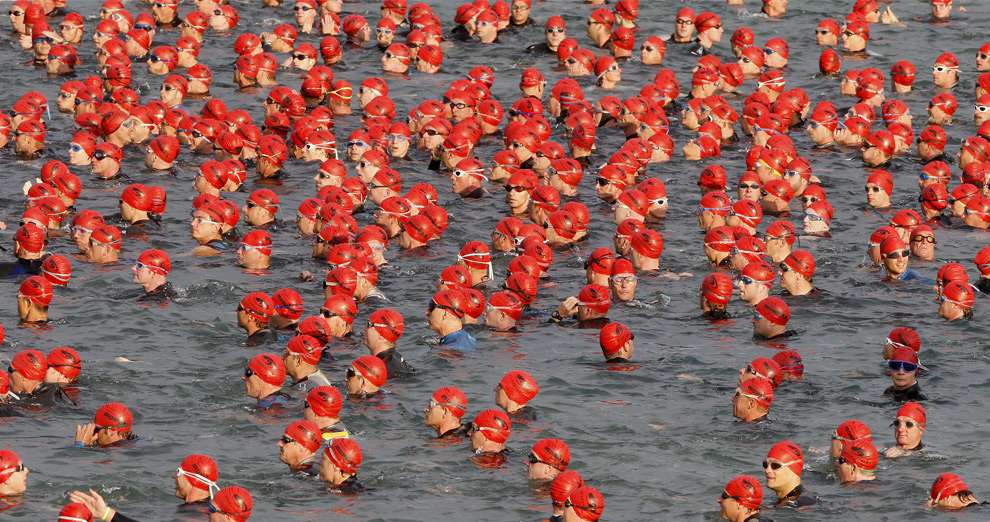 Participants are seen waiting, at the start of the 3.8 kilometer (2.4 mile) swimming event of the Ironman Frankfurt 2008 triathlon in a lake near Frankfurt, central Germany, on Sunday, July 6, 2008. (AP Photo/Daniel Roland) 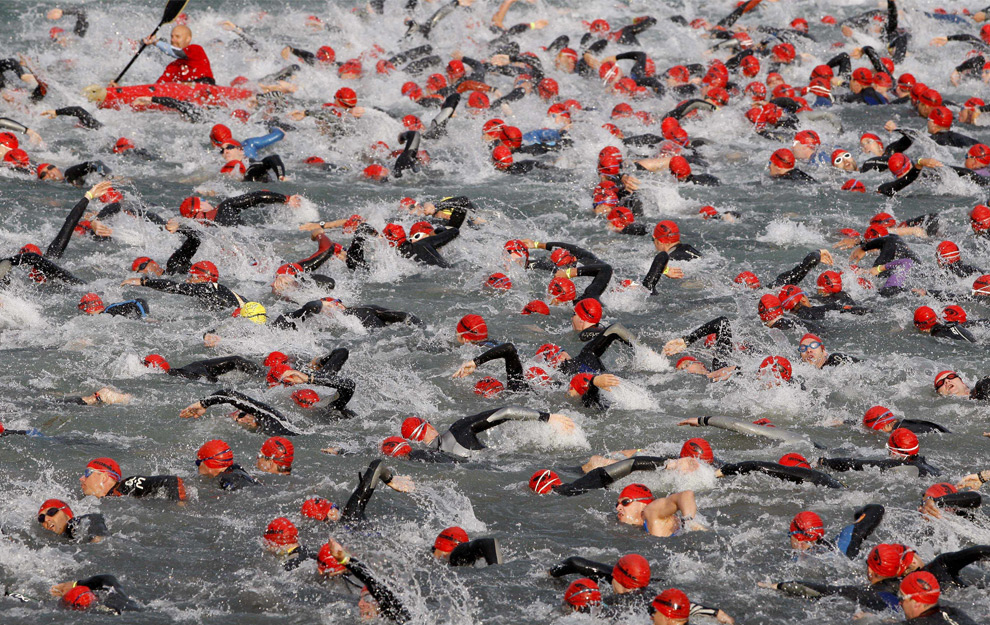 Participants begin swimming at the start of the 3.8 kilometer (2.4 mile) swimming event of the Ironman Frankfurt 2008 triathlon in a lake near Frankfurt, central Germany, on Sunday, July 6, 2008. (AP Photo/Daniel Roland) 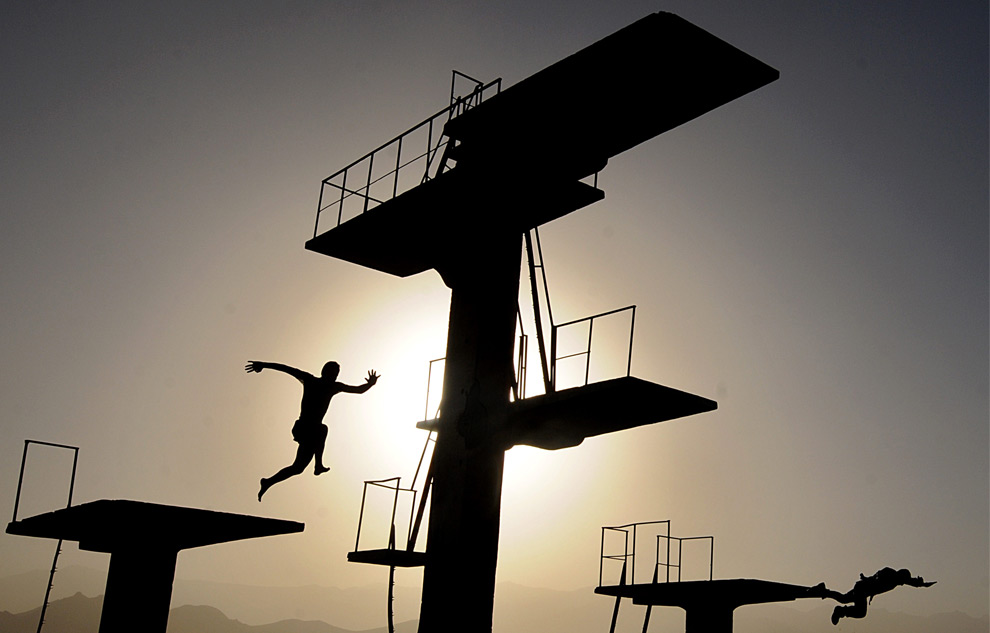 Afghan youths dive at a swimming pool on Wazir Akbar Khan hill in Kabul on June 24, 2008. Temperatures in the Afghan capital are approaching the 30 degrees Celsius mark as the summer sets in in Central Asia. (SHAH MARAI/AFP/Getty Images) 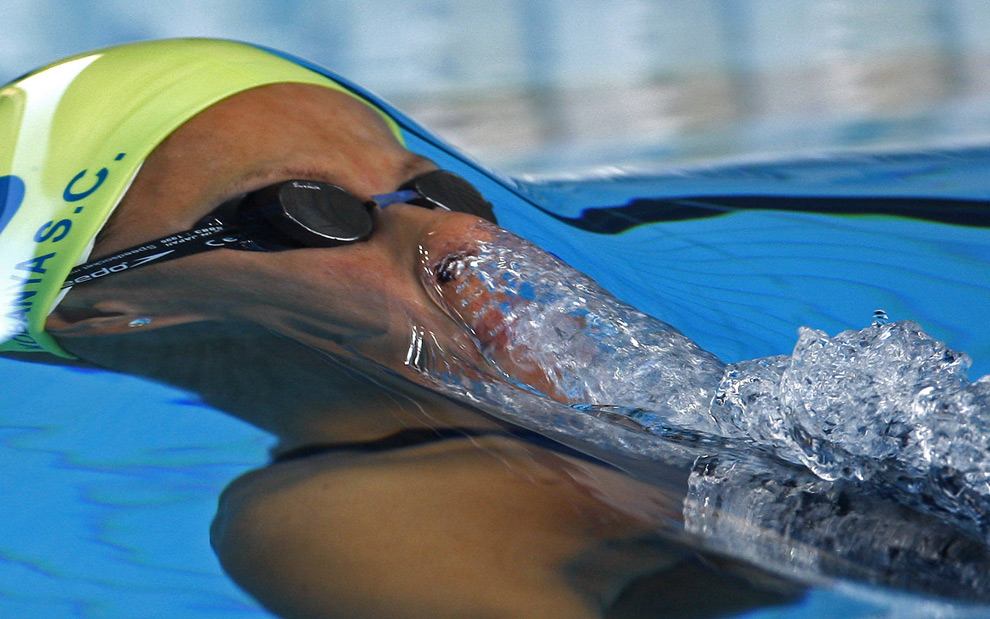 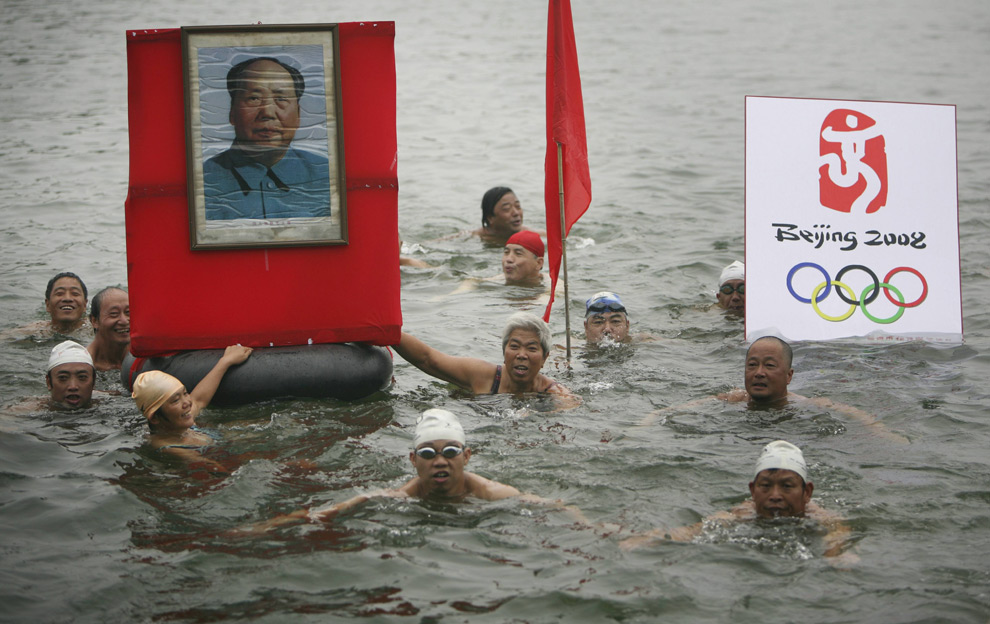 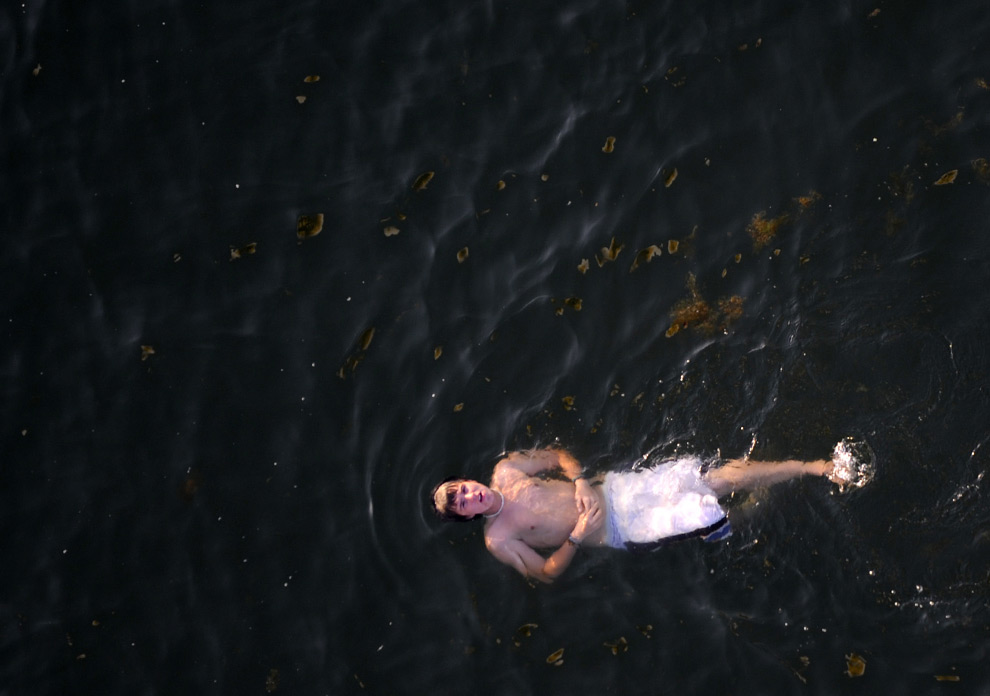 A boy lies in the water off Compostela beach in Vilagarcia de Arousa, northwestern Spain on July 22, 2008. Temperatures in Spain are expected to hover around 40C over the course of the week due to a current of hot air from Africa. (MIGUEL RIOPA/AFP/Getty Images) 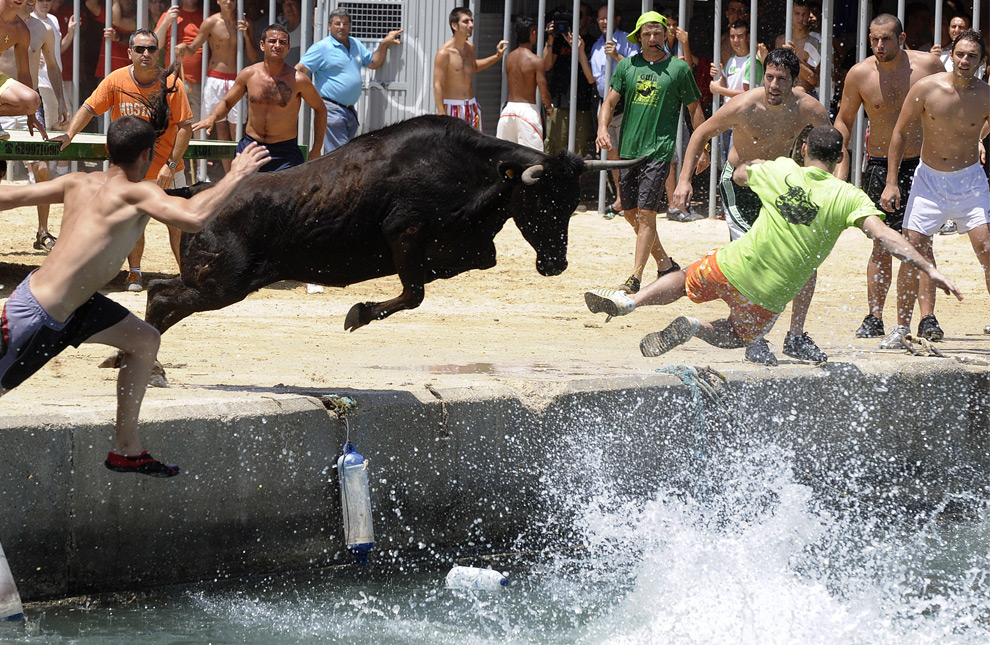 A bull charges men off the port during the traditional bulls celebration on the seafront in Denia Alicante on July 7, 2008. (DIEGO TUSON/AFP/Getty Images) 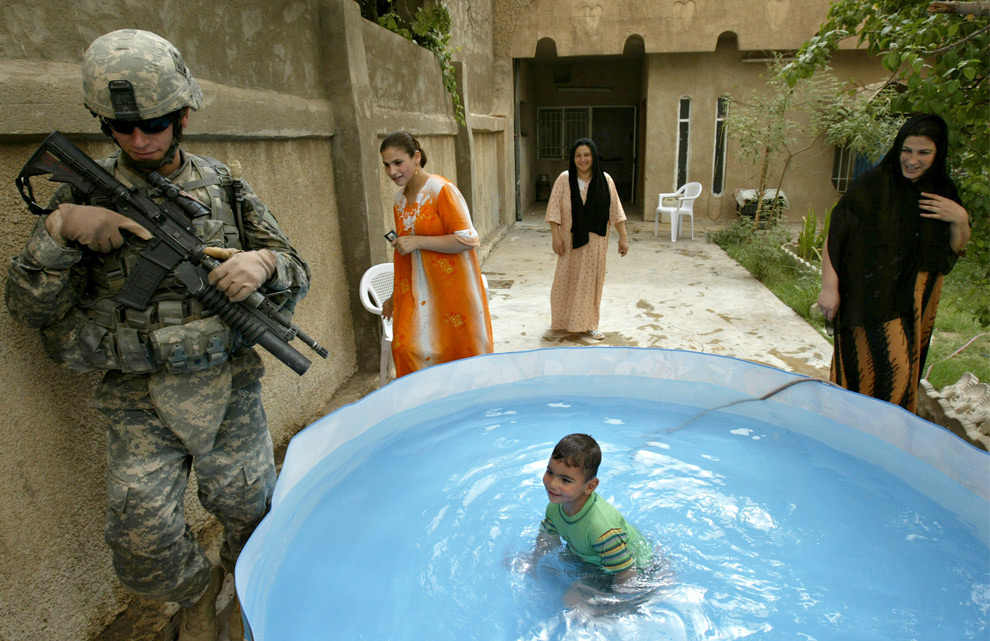 A US soldier walks past an Iraqi child playing in a wading pool in the courtyard of a residence in the Dora neighbourhood in Baghdad on July 2, 2008. (ALI YUSSEF/AFP/Getty Images) 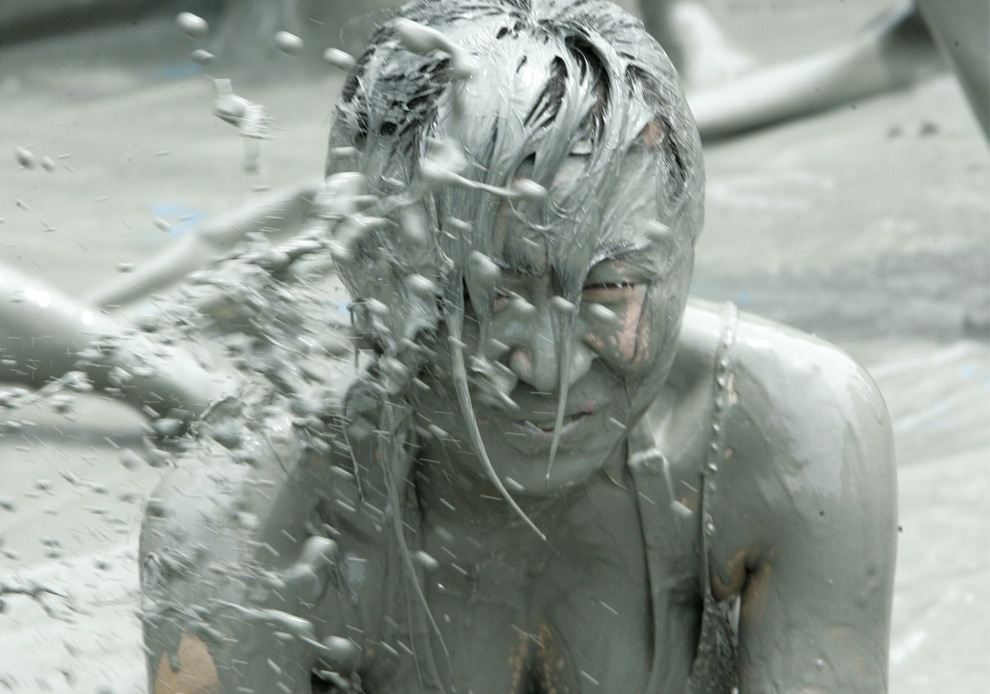 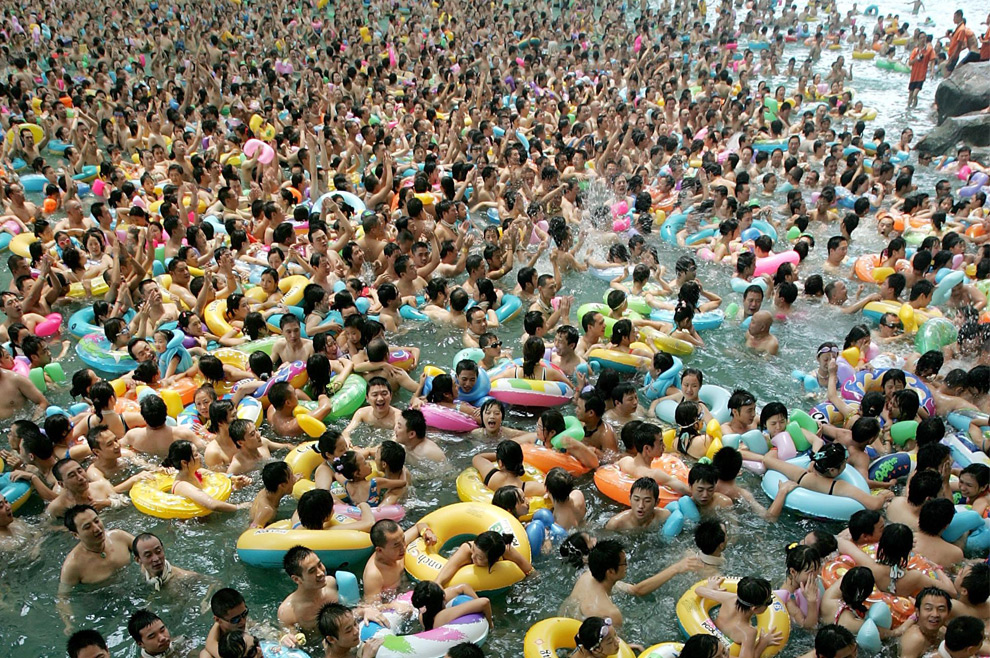 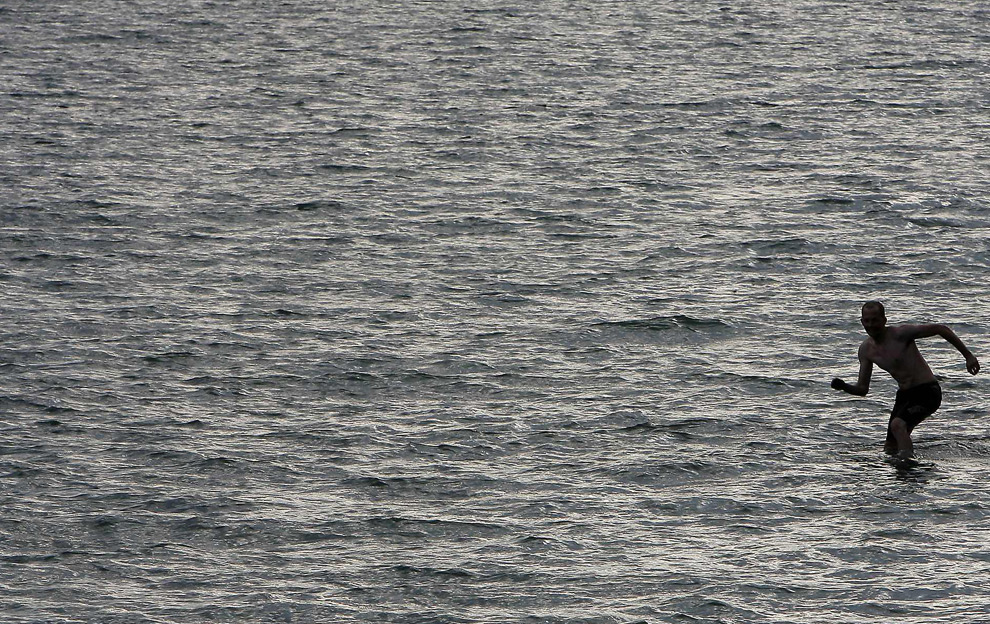 A bather is silhouetted as he prepares to dive into the Walensee lake in the town of Walenstadt, about 75 km (47 miles) outside of Zurich, July 16, 2008. (REUTERS/Christian Hartmann) 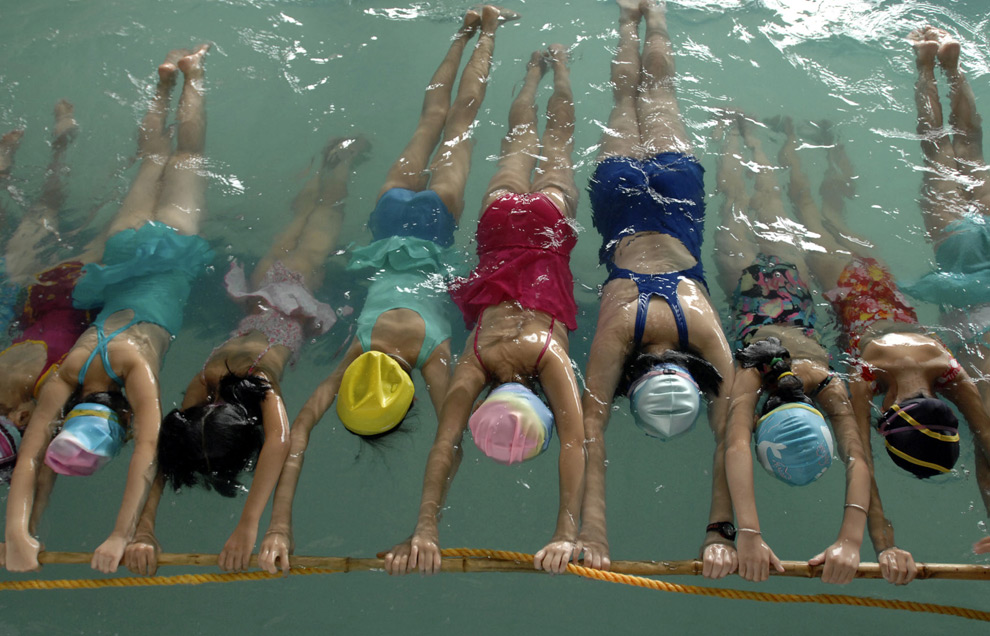 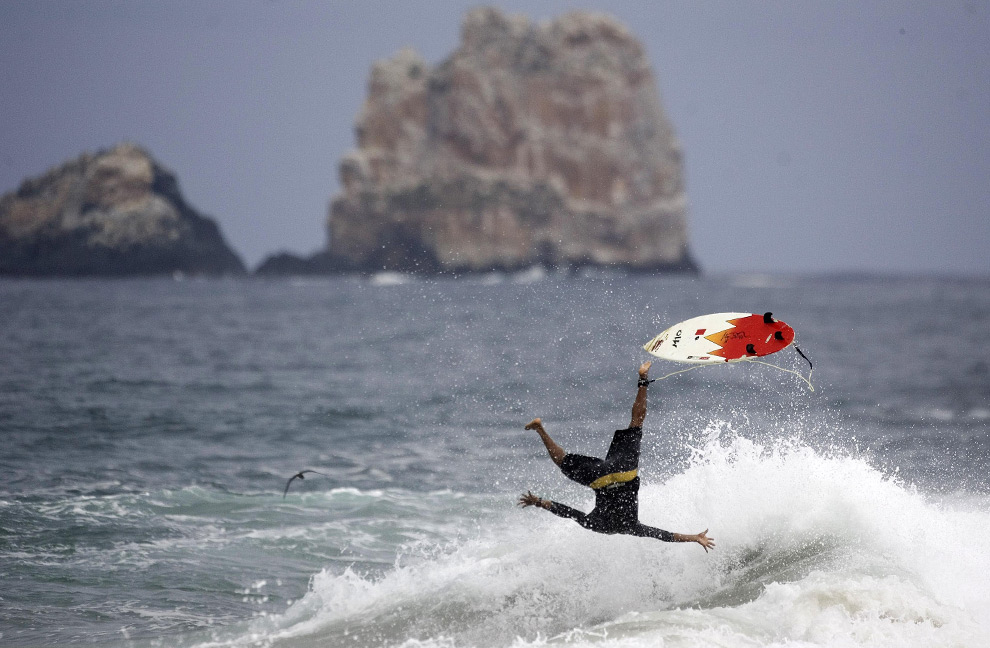 A surfer falls from his surf board the Escobilla beach in Ixtapa, Mexico, Sunday, July 6, 2008. (AP Photo/Eduardo Verdugo)