Yesterday's announcement by NASA of the discovery of water ice on Mars by its Phoenix Lander probe made big news everywhere. The discovery involved the observation of water ice sublimating into the air - that is, the water went from solid to vapor state without reaching the liquid stage. The Martian atmosphere has perfect conditions for sublimation - extremely thin, dry and cold. How cold? Well, you can check the Live Martian Weather Report, with data from a station on board the Phoenix Lander. Today will see a high temperature of a toasty -26 degrees F.

What more do we know about Mars' atmosphere? It's hundreds of times thinner than Earth's atmosphere and is made of 95% carbon dioxide, 3% nitrogen, 1.6% argon, and contains traces of oxygen, water, and methane. We also know, from observations that it can support dust storms, dust devils, clouds and gusty winds. With an amazing number of six current live probes exploring Mars (two rovers, a lander, and three orbiters), there are many thousands of images available. Only a few, however show atmospheric phenomena. Presented here are some of the best images of Martian atmosphere (and beyond) in action. (17 photos total)

High, wispy clouds cover a large portion of Mars, seen in this, the first true-colour image of Mars generated with the OSIRIS orange (red), green and blue color filters. The image was acquired by an instrument on the ESA's Rosetta probe on Feb. 24, 2007 from a distance of about 240,000 km. Image resolution is about 5 km/pixel. (Credits: ESA © 2007 MPS for OSIRIS Team MPS/UPD/LAM/IAA/RSSD/INTA/UPM/DASP/IDA) 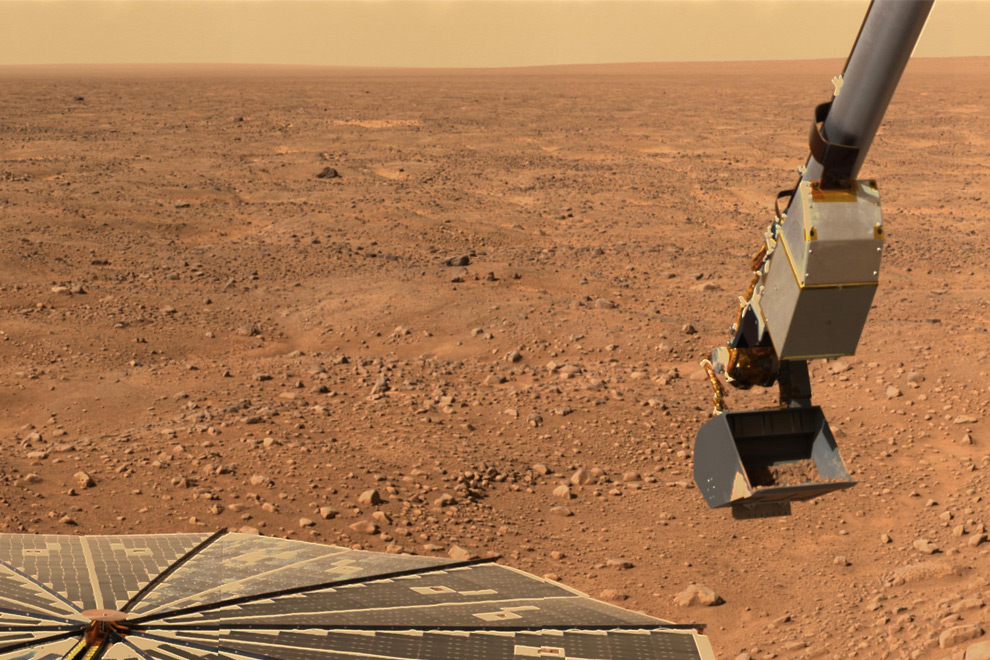 Mars' northern orange sky and horizon, seen by NASA's Phoenix Mars Lander. The lander's solar panel and Robotic Arm with a sample in the scoop are also visible. The image was taken by the lander's Surface Stereo Imager looking west during Phoenix's Sol 16 (June 10, 2008), or the 16th Martian day after landing. The image was taken just before the sample was delivered to the Optical Microscope. (NASA/JPL-Caltech/University of Arizona/Texas A&M University)

The brownish gray sky at sunset as it would be seen by an observer on Mars - true color mosaic taken by Mars Pathfinder on sol 24 (June 22, 1996) The sky near the sun is a pale blue color. (NASA/JPL) 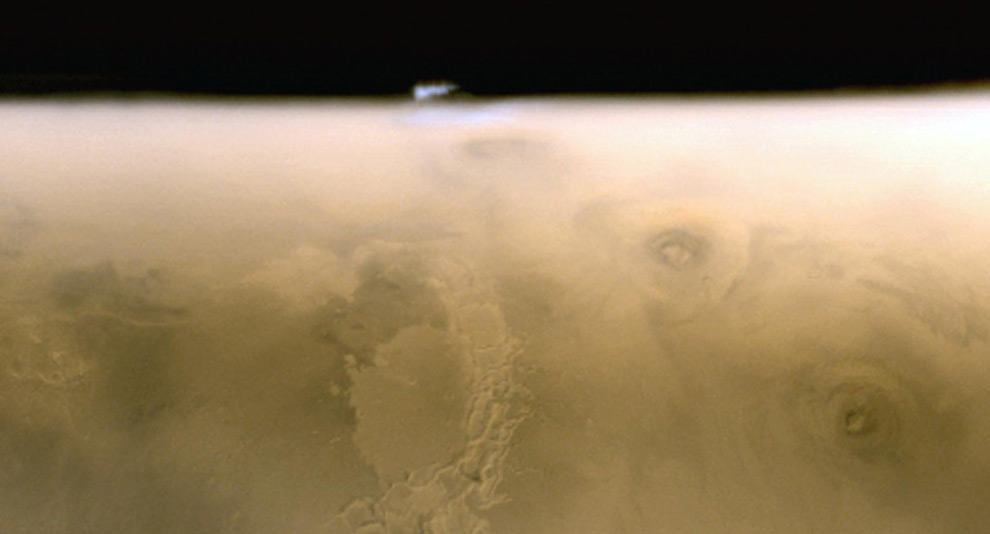 Clouds over crater - the dust storm season in the southern hemisphere of Mars was well underway. This image of an unnamed crater southeast of Hellas Basin shows the encroachment of a storm in the region. Image acquired in 2001 by Mars Odyssey orbiter (17 meter/pixel resolution). (NASA/JPL/ASU) 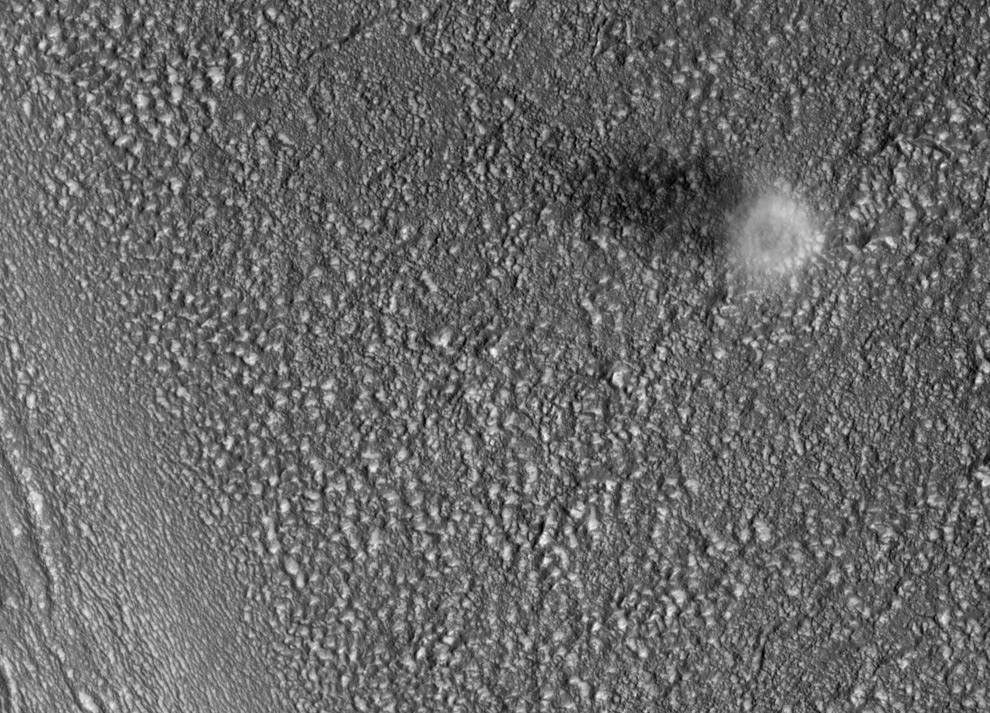 Dust devil from above. This image taken by the Hi-RISE Camera aboard NASA's Mars Reconnaissance Orbiter catches a dust devil blowing across the Martian surface. Dust devils generally form in the afternoon because the sunlight needs sufficient time to warm the surface. When this image was taken, the local time was about 3:08 p.m. The bright material is the dust within the vortex, and a dark shadow cast by the dust devil is visible to the left. The diameter of this dust devil is about 200 meters, but at the surface it is probably much smaller. Based on the length of the shadow in this image, the dust devil is on the order of 500 meters tall. (NASA/JPL/University of Arizona)

Several dust devils cross a plain in this animation of a series of images acquired by NASA's Mars Rover Spirit in May, 2005. (NASA/JPL-Caltech/Cornell/USGS)

A well-defined dust devil crosses in front of the camera in this animation of a series of images acquired by NASA's Mars Rover Spirit in May, 2005. (NASA/JPL-Caltech/Cornell/USGS) 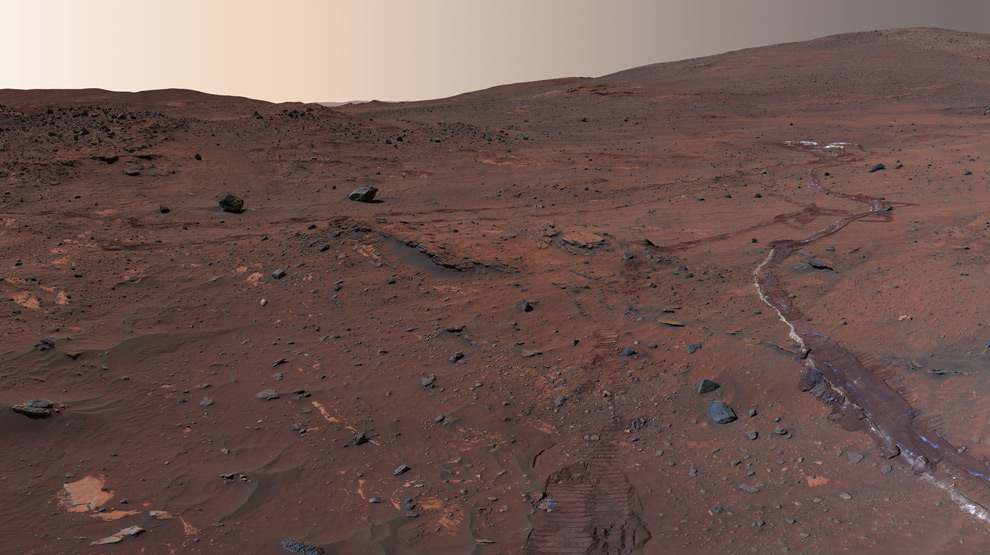 Martian skies seen above a rolling horizon in this image, part of a larger image called the "McMurdo" panorama, taken in the Martian winter of 2006 by NASA's Mars Exploration Rover Spirit. The tracks in the soil are from Spirits wheels as it rolled through the area earlier. (NASA/JPL/Cornell) 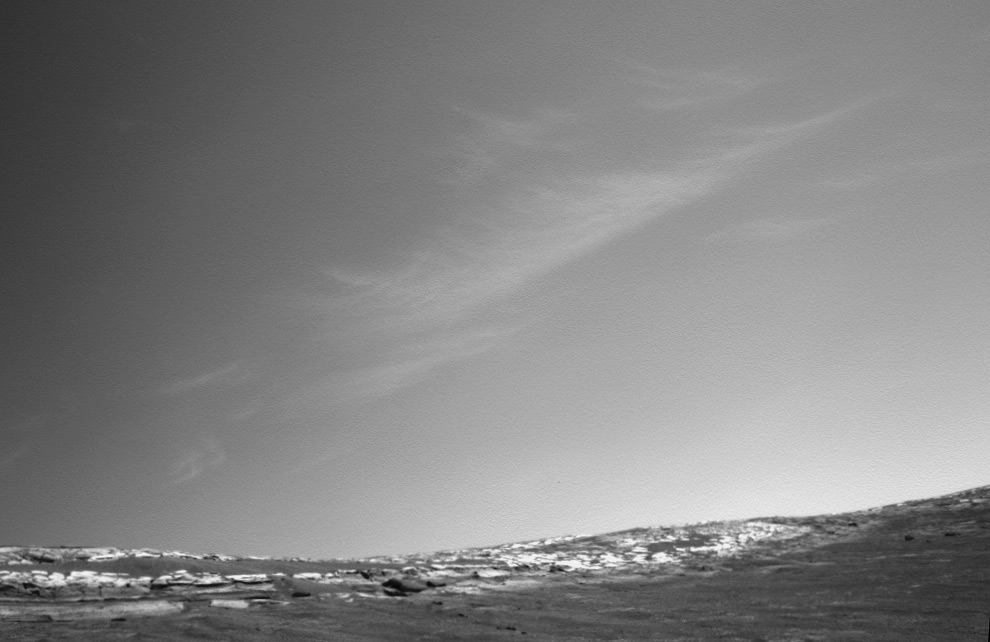 Clouds above the rim of "Endurance Crater" in this image from NASA's Mars Exploration Rover Opportunity. These clouds occur in a region of strong vertical shear. The cloud particles (ice in this martian case) fall out, and get dragged along away from the location where they originally condensed, forming characteristic streamers. Opportunity took this picture with its navigation camera during the rover's 269th martian day (Oct. 26, 2004). (NASA/JPL) 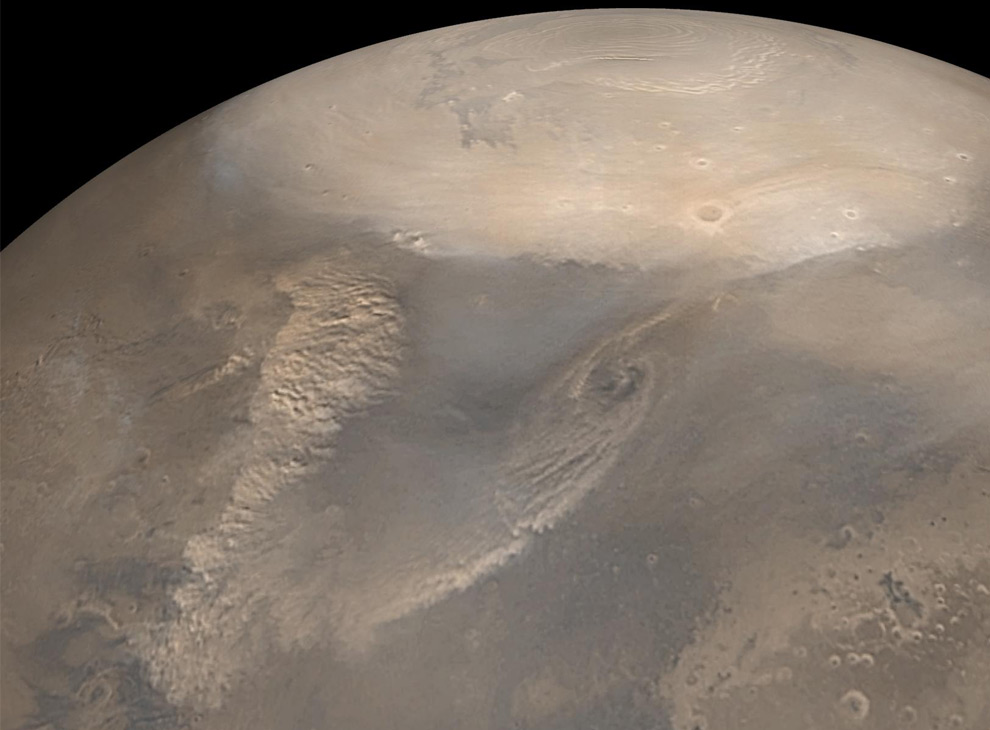 An exaggerated color image mosaic of images from NASA's Mars Rover Opportunity. The clouds can be composed of either carbon dioxide ice or water ice, and can move swiftly across the sky. (NASA/JPL/Cornell)

Large dust storms cover much of Mars' surface in this July, 2001 image, acquired by NASA's Mars Global Surveyor Mars Orbiter Camera. By early July, the martian atmosphere was so hazy that opportunities for high resolution imaging of the planet were very limited. (NASA/JPL/Malin Space Science Systems) 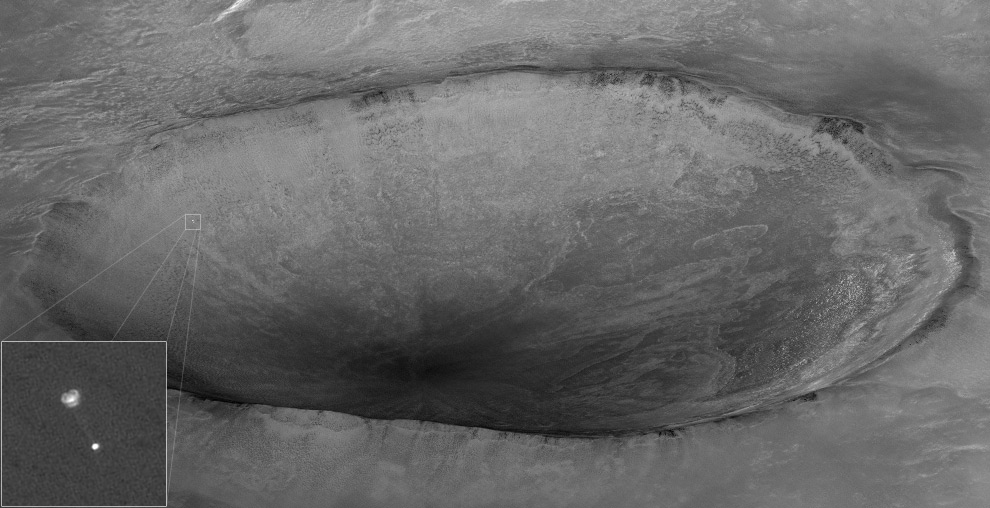 The air is certainly thick enough to fill a parachute. On May 25th, 2008, the HiRISE camera onboard the Mars Reconnaissance Orbiter acquired this dramatic oblique image of the arrival of its sister probe from NASA, the Phoenix Lander, descending on its parachute. Phoenix and its parachute can be barely seen in the larger image with 10 km wide crater informally called "Heimdall" in the background. Although it appears that Phoenix is descending into the crater, it is actually about 20 kilometers in front of the crater. Given the position and pointing angle of MRO, Phoenix is at about 13 km above the surface, just a few seconds after the parachute opened. (NASA/JPL/University of Arizona) 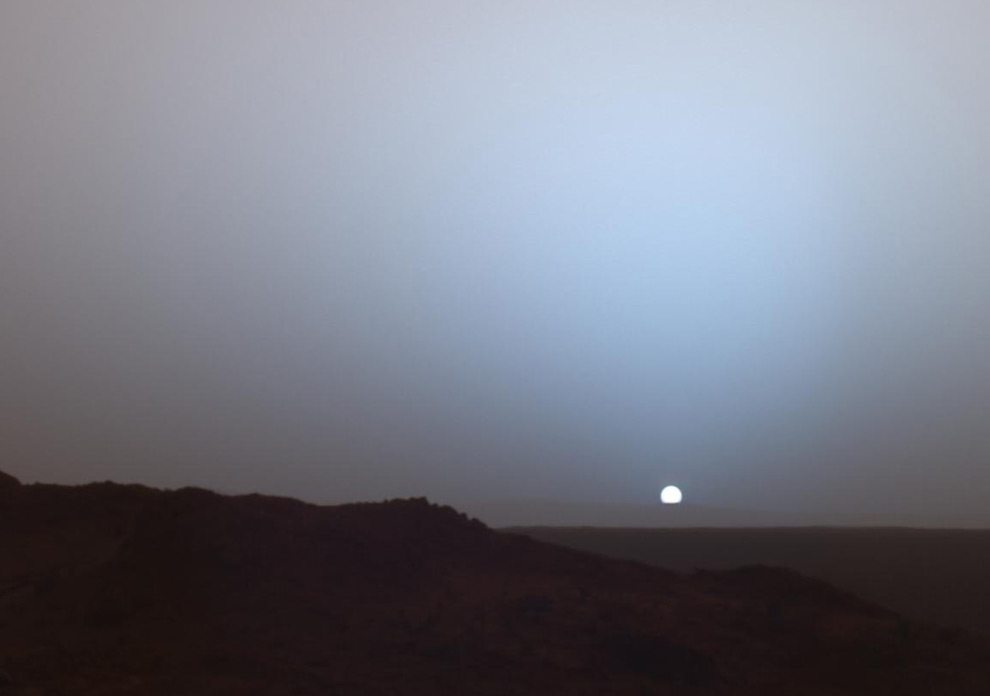 On May 19th, 2005, NASA's Mars Exploration Rover Spirit captured this stunning view as the Sun sank below the rim of Gusev crater on Mars. This Panoramic Camera mosaic was taken around 6:07 in the evening of the rover's 489th martian day, or sol. Spirit was commanded to stay awake briefly after sending that sol's data to the Mars Odyssey orbiter just before sunset. The image is a false color composite, showing the sky similar to what a human would see, but with the colors slightly exaggerated. (NASA/JPL/Texas A&M/Cornell) 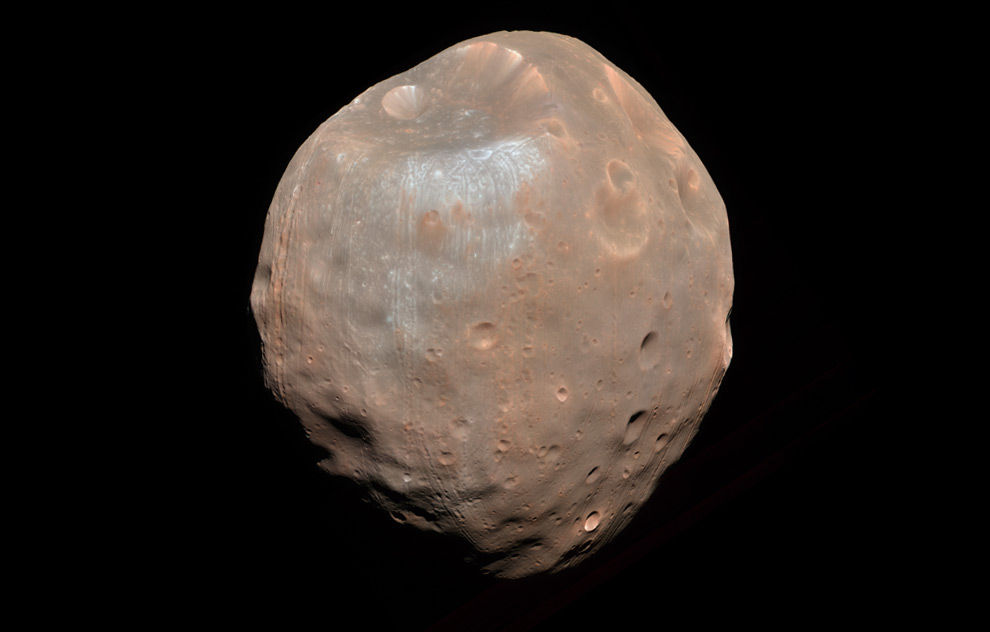 Higher in the Martian skies, we see one of its two moons. The HiRISE camera onboard the Mars Reconnaissance Orbiter acquired this dramatic view of the Martian moon, Phobos, on 23 March 2008, from a distance of 6,800 kilometers. The illuminated part of Phobos is about 21 km across. The most prominent feature is the large impact crater Stickney, in the upper left. With a diameter of 9 km, it is the largest feature on Phobos. (NASA/JPL/University of Arizona) Even higher in the Martian sky, the Earth and Moon hang in space, as seen from Mars. The HiRISE camera onboard the Mars Reconnaissance Orbiter acquired this image at 5:20 a.m. MST on October 3rd, 2007, at a range of 142 million kilometers, while orbiting Mars.