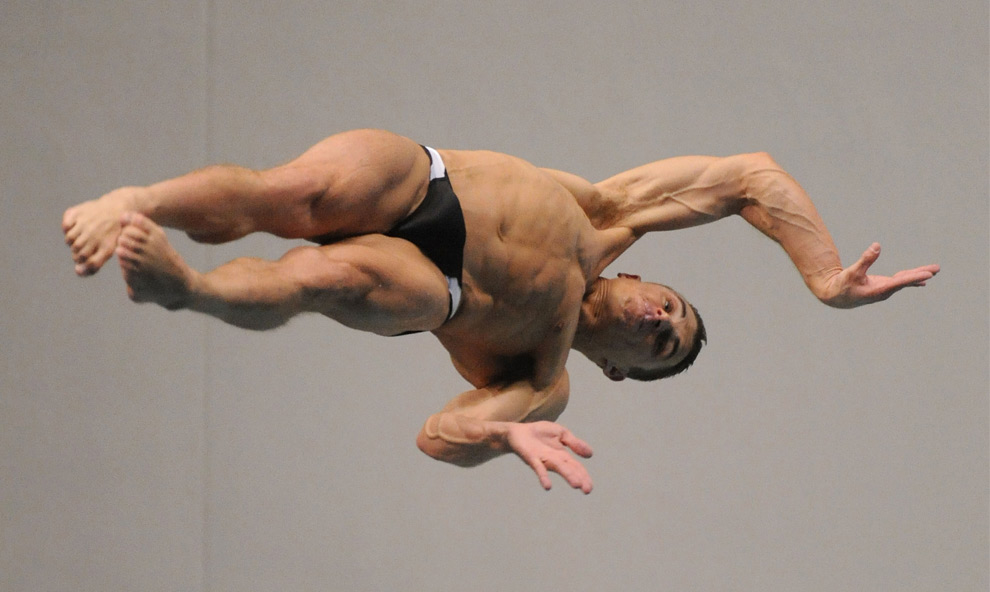 Troy Dumais twist in midair as he competes in the senior 3M springboard semifinal during the 2008 USA Diving Olympic Team Trials on June 20, 2008 in Indianapolis, Indiana. (Photo by Harry How/Getty Images)

Compliments for the pictures! Someone are incredible! I'd like to write a thesis about photojournalism. Boston.com is one of most important reference in the world.

I love the faces that most of them are making, concentrating and exherting themselves.

Such grace, such beauty, such dignity.

Amazing pictures. I love the angles on them.

haha, their expressions are priceless!

Always fabulous images. I wish I knew more about the equipment to take them, settings, etc.

What I mean is that to an amateur photographer like me, the story itself is 1/2 the story! How the images were made is the other half, no?

For example... Some of these images were taken from right above the platforms. Was there scaffolding prepared, or was the photographer dangling from ropes! :) What shooting mode allowed a wide selection of images? If high speed (rapid fire) capture, what did the photographer think the right time to start firing away was?

I know this probably is not the forum for this kind of back story. Just curious, though. Who could blame me with these kinds of images (and the rest on the blog/site)?

Thanks so much for making them available to us budding photographers!

Ah! I thought is was sponsored by the PostIt Note people...

thanks for posting these...

I watched this on TV. The still images are much more compelling. Thanks for the share!

Great combination of grace, strength, and intense concentration. I particularly like the ones set against the sparkling water, for context and contrast.

The last photo has such amazing color.

And the last photo shows the vaporization of the water BEFORE the diver's swim due to the Reynolds number that day (I was there.) Should be an awakening for all coaches from the hole-punch school. Those thousands of little bubbles have already been generated due to turbulent flow according to basic fluid mechanics, and a rip will ensue. I've never seen such a well-timed photo of this from this perspective. Thanks!

Just Super...Amazing Pics...This is a great help you are doing to the world. Opening new windows to the art of story telling....Keep it going

please please where is all the pictures with the truth about Zimbabwe??

The photographer is a great artist.

Lots of things come to mind when i look at the photos:

Thank God he created men, swimming pools, athletes and the photographer that took these photos****

Very cool pictures...love the expressions on their faces. And the flexed muscles...wish I had muscles like that! :-)

These are gorgeous, and hilarious. The way the water looks is very cool.

really nice images, love to watch the dive from the athletes view...thanks:)

lol the faces in these photos are not complimenting the performers.

Sometimes you need to know when to take that shot, that's another challenge when taking fast sport shoots.

for zach, i was there shooting and there's a catwalk way at the top of the building. that's how the photogs got shots from above.

i shot high speed right when they went off the platform. it was all about following the divers and anticipating where they were going to be.

hope that offers a little insight.

Incredible timing on the last photo to capture the diver's entry without much splash! Really amazing detail and artistic framing with the color and different textures on the water.

If you want some really funny facial pics... try getting the front view of the diver right when they are on the end of the springboard, reversing direction from pushing the board down to riding the board on the way up... all the muscles and skin pull downward... for some very funny expressions! :o)
(P.S. - I'm an old, ex nationally competitive diver)

I was THERE! Your photos are fantastic! You really were up in the crow's nest for these shots. So inspiring! and great to use for talking to future divers concerning form, intensity, etc involved with the sport. Glad someone covered the athletes from these angles rather than the conventional format.

Amazing photos, I'll have a look around to see if there's more details about how the photos were taken.

These photos are so clear I can see how out of shape I am.

OMG, great shots.. I'm more motivated than ever to keep at it. Taking photos that is.

its cool u guys got smooth bodies and a deep dive very cool. and I'M 10 years old
how cool its that. my birthday just past July the 15 1998 .

pleas send me picture of photo womans swiming of olimpic2008

I love Diving i'm even doing a project about it

those people are freaks

they r so awesome i wont to dive just like them

The photo of Terry Horner entering the water...sensational!

WOW! i need to learn that