TV critic Matthew Gilbert has rounded up 14 of the decade's most profound unscripted television moments. Why 14? Why not?

Picking out the decade’s top 14 unscripted moments is a tricky venture. So much of what is sold as unscripted these days has actually been quite carefully planned. When the “Britain’s Got Talent” judges rolled their eyes about Susan Boyle before she sang, or when Janet Jackson underwent her “wardrobe malfunction,” many of us suspected that those turns of fate had in fact been choreographed in hopes of creating drama and controversy.

So here is a loosely defined collection of moments from the 2000s that were unscripted, or seemingly unscripted, or simply live and historic. I’ve avoided straight-ahead news coverage of the decade’s biggest stories, to focus instead on my favorite instances when reality or truth seemed to assert itself through the medium of TV. 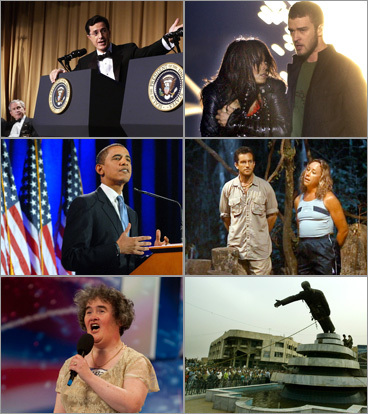