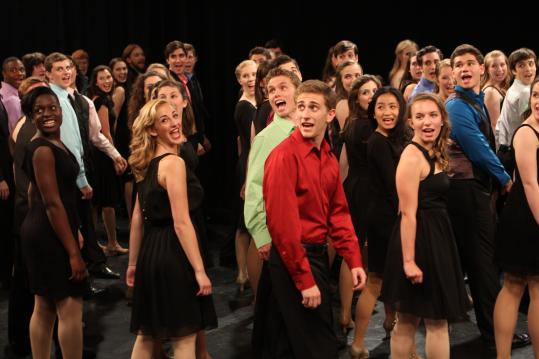 To get a sense of television’s unique power to both popularize and distort, consider the mixed bag that is “Glee,’’ which has kindled interest in musical theater while asking us to swallow the spectacle of high schoolers who magically launch into Broadway-style production numbers at the drop of a hat.

In the real world, of course, musical performance involves not just talent and personality but toil, sweat, discipline — in other words, a willingness to practice, practice, practice. That trait is evident in abundance in “Broadway or Bust,’’ a lively and illuminating three-part documentary series that begins airing Sunday at 8 p.m. on Channel 2.

The series, coproduced by WGBH Boston and writer-director Lance K. Shultz, follows 60 teenagers from around the country — two of them from the Boston area — as they relentlessly rehearse in New York under the tutelage of Broadway pros, preparing to compete at the 2012 National High School Musical Theater Awards.

Though it’s hard to keep the contestants straight at first, the focus eventually narrows to a dozen or so primary figures. The group as a whole emerges as endearingly starry-eyed, gawking at the neon blaze of Times Square. “This is my dream,’’ gushes one young performer. “This is all I’ve ever wanted to do.’’ Adds another: “Being onstage is when I feel most alive.’’

They’re a generally collegial bunch, offering a refreshing contrast to the ruthless, dog-eat-dog ethos of so many reality-show competitions. A contestant named Evan acknowledges he’s not much of a singer, and goes on to prove it with his off-key version of “Master of the House,’’ from “Les Misérables.’’ But here and elsewhere, Evan utilizes his comic chops to the max, and his performances draw delighted applause from his peers.

“Broadway or Bust’’ makes clear how many jolts to the ego these young performers have to absorb. They’ve won regional contests to make it to New York and are used to being the best singers in their high schools, but now, as one contestant remarks, “There’s talent everywhere you look. . . . It really forces you to work harder.’’

And work they do, in a cycle of endless repetition, tired feet, and cracking voices. They struggle to memorize lyrics and learn new dance routines in just a few days, getting ready for the group performances and individual medleys, after which six finalists are chosen. At the National High School Musical Theater Awards, which took place in June at Broadway’s Minskoff Theatre, they would be vying for one of two prizes: best actor and best actress.

Van Kaplan, the stage director for the competition, is an avuncular presence on the show, but choreographer Kiesha Lalama demonstrates a tougher approach. After one group rehearses a dance number, she barks her verdict at them: “Absolutely not even close!’’ Later, she says: “I need you to screw your heads on. Right now.’’ But at another point, Lalama responds with tender solicitude when one girl’s eyes fill with tears, and she gently suggests the contestant take a break.

The singer-pianist Michael Feinstein shows up at one rehearsal and, after noting that he worked for Ira Gershwin for several years, accompanies a contestant named Nick on George and Ira Gershwin’s “They Can’t Take That Away From Me.’’ Feinstein then matter-of-factly deconstructs Nick’s performance, pointing out the wrong note, the erroneous lyric.

There are a couple of heart-tugging story lines in “Broadway or Bust’’ that remind us how often musical theater serves as a lifeline for people in trouble. A contestant named Brittany describes how her family was left impoverished and homeless, forced to live in their car for two years, after her father walked out on them. She says she felt that “if I could express myself with my voice, there was nothing that could stop me, even if he was gone.’’ That lends considerable poignancy to her renditions of “And I Am Telling You I’m Not Going,’’ from “Dreamgirls.’’ Nervous and faltering at first, Brittany gets steadily better each time she performs it.

The directors, singers, performers, and vocal coaches who work with the students emphasize the importance of establishing an emotional connection with a song, then with the audience. When a contestant named Sabaa says her focus on music has been met with disfavor by her extended family, in which medicine and engineering careers are the norm, a vocal coach urges her to “persuade them of your passion” in her performance. The coach takes Sabaa by the arms, spins her in circles, and says, “Tell them!’’ Sabaa does.

Contemporary works have clearly made it into the high school repertoire. Yes, students are called upon to sing selections from the inevitable likes of “Phantom of the Opera’’ and “Evita,’’ but they also tackle songs from “The Drowsy Chaperone,’’ “The 25th Annual Putnam County Spelling Bee,’’ “The Light in the Piazza,’’ and even “The Book of Mormon’’ — one of that show’s few G-rated tunes. Like the fresh-faced talents on display in “Broadway or Bust,’’ it’s a heartening sign of musical theater’s continued vitality.