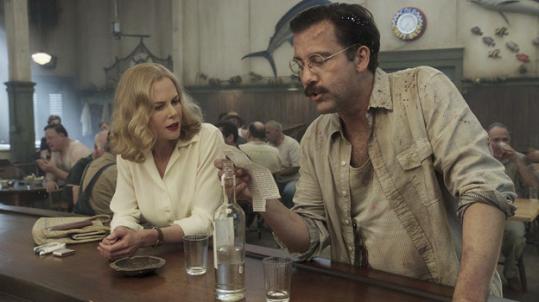 Hemingway you know about. Gellhorn you probably don’t.

Martha Gellhorn was Ernest Hemingway’s third wife. She had already published a book of reportage when they met, in 1936, and would become a celebrated foreign correspondent. They fell in love in Spain, covering the civil war. Their often stormy relationship lasted nine years. It’s fair to say that Gellhorn was the only one of Hemingway’s four wives who was anything like a match for him.

In photographs, she doesn’t come across as beautiful — certainly not Nicole Kidman-beautiful — but she has an attractiveness equally born of character, determination, and spirit.

“Hemingway & Gellhorn,” which airs on HBO Monday night, is a love story, of course. Kidman, as Gellhorn, and Clive Owen, as Hemingway, definitely have chemistry. It’s also a travelogue (Key West, Fla., Cuba, Spain, New York, Finland, China), as well as a small-screen historical epic (a bit like “Reds,” only with less snow).

There’s a cavalcade of famous real-life names. If the History Channel were really about history and had production values, this would fit right in. Poor David Straithairn, as John Dos Passos, gets to do his dithery man-of-conscience routine. Joan Chen, as Madame Chiang Kai-shek, is in high dragon-lady mode. Peter Coyote plays Maxwell Perkins, Hemingway’s editor, with what sounds suspiciously like an English accent.

Also on hand are Orson Welles, Chou En-lai, and Robert Capa (“You capture that human thing,” an admiring Gellhorn says to him about his photographs). Oh, and Robert Duvall shows up as a Soviet general who starts to play Russian roulette with Hemingway until Tony Shalhoub’s Soviet journalist intervenes with vodka and caviar. Of course he does. It’s that kind of movie: a two-fer, HBO-knowing and big-star biopic-corny.

Kidman, who looks terrific in general, looks especially good in black-and-white. Glamour is as glamour does, even during an artillery barrage (or maybe especially during an artillery barrage). Shellfire even serves as a romantic device. The first time Hemingway and Gellhorn make love, in embattled Madrid, explosions go off — literally. The earth may not move, but their hotel room does.

“Hemingway & Gellhorn” is all about star power, but that star power comes at a price. Gellhorn was 28 when she met Hemingway, who was 37. Kidman’s 44, Owen’s 48. Stars, being stars, get a certain amount of chronological leeway. And it’s not as if Kidman or Owen looks old, exactly. Still, the basic dynamic is a bit out-of-kilter. A lot of the early scenes don’t make much sense if the Gellhorn we see is so clearly a mature, experienced woman.

The story’s much more hers than his. That’s just as well. Although brave and generous-spirited, Owen’s Hemingway is often loutish and always sententious. Gertrude Stein dismissed Ezra Pound as “a village explainer.” Hemingway plays that role here. “There’s nothing to writing, Gellhorn,” he says (they usually address each other by surname — cute, no?). “All you do is sit down at your typewriter and bleed.” Note that when he types, he stands.