‘Apartment’ a home for laughs 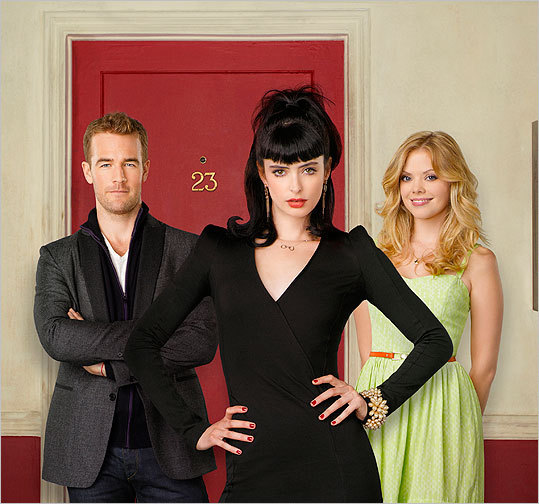 There is a scene early in the pilot of the amusing new ABC sitcom, “Don’t Trust the B---- in Apartment 23,” premiering Wednesday at 9:30 p.m., that neatly encapsulates just about everything the viewer needs to know about the show’s tone of heightened absurdity.

June (Dreama Walker, “Gossip Girl”), a bright-eyed gal from Indiana, has just moved to New York to start her career at a high-end brokerage house. She arrives on her first day, dainty desk plant in hand, only to discover the place in a state of post-Madoff-style chaos complete with an alarm sounding, an employee making off with the copy machine, and police hunting down the owner for embezzlement. When June meets the man who would have been her mentor, a cheerful guy named Mark (Eric Andre), he advises her to adopt a looting mentality as he stuffs a bag of bagels down his pants.

It is an antic moment chock-full of little visual and audio throwaway gags and a good indicator that “Apartment 23” will be more than your average “friends in New York get up to hilarious hijinks” fare.

Then again, it will also be precisely that, judging by the three episodes available for review — two of which were made available online ahead of Wednesday’s debut — in which familiar sitcom tropes do pop up, including wacky neighbors, a crazy wedding reception, and the two roommates who start out at odds. But similar to a predecessor in arch loopiness, the late, lamented “Better Off Ted,” “Apartment 23” pushes all of those familiar concepts to new, sometimes politically incorrect, and often hilarious, limits.

Forced by the loss of her job into a roommate search, June lands at the doorstep, and the mercy, of Chloe (Krysten Ritter, “Breaking Bad”), a crafty party girl who plays the part of new bestie to lure in roommates, only to unleash the dragon to drive them out days later so she can keep their security deposits.

Walker and Ritter play off each other with a zingy effervescence, and the show’s creator, Nahnatchka Khan (“American Dad”), wisely makes June good-natured but not idiotic and Chloe narcissistic but not irredeemably so. “Look who decided to pick up a racket and join the game,” says Chloe with grudging admiration, when June manages to give almost as good as she gets upon realizing the scam Chloe’s got going.

The show’s best running joke, however, is James Van Der Beek playing a deliriously oblivious version of himself still grappling with his “Dawson’s Creek” fame, not unlike what Matt LeBlanc is doing on Showtime’s “Episodes.” After three installments Van Der Beek’s gonzo self-laceration as “the Beek from the Creek” has surprising legs, even if you never visited Capeside. And the bits we get to see of fake commercials and films — including a role in a Guy Ritchie caper — are some of the series’ best laugh-out-loud moments.

Unlike some of the more uneven odd-couple series that have premiered in recent years, “Apartment 23” could turn into a trustworthy address for laughs.