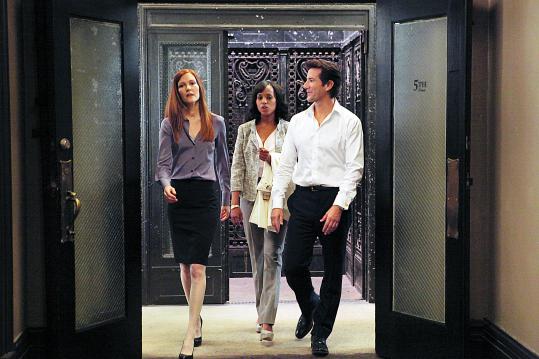 How fast do they talk on the new ABC drama “Scandal,” premiering Thursday night at 10?

Let’s just say that Lorelai Gilmore would ask for it at half-speed, Howard Hawks might get dizzy, and even the rapid-fire walk-and-talkers of “The West Wing” might need a breather were they to wander over to this neck of Washington, D.C., in which the speedy speakers on the team at Olivia Pope & Associates — a motley crew of lawyers, former government employees, and salesmen — put out fires for the rich and powerful as crisis-management consultants.

Maybe creator Shonda Rhimes — the mind behind “Scandal” lead-in “Grey’s Anatomy” — is just trying to hustle past all the exposition necessary to introduce her latest ensemble of beautiful, smart, and twisty people.

And there are a lot of them, including Henry Ian Cusick (“Lost”) as Olivia Pope’s guy Friday, ladies man-in-reform Stephen Finch, Darby Stanchfield (“Mad Men”) as feisty investigator Abby Whelan, Guillermo Diaz (“Weeds) as former CIA operative and hacker extraordinaire Huck, and Columbus Short (“Stomp the Yard”) as suave litigator Harrison Wright. They are led by a crackerjack Kerry Washington (“Ray”) as Pope, a former White House adviser with a trusty gut about the secrets and lies of the cases she takes.

We’ve certainly met characters like Pope before, the professional who has her clients’ problems on lockdown but can’t quite manage her own messy personal affairs. (And Pope has one seriously messy affair to handle.) But Washington becomes her, as she toggles between no nonsense and vulnerability with elan.

We are plunged into this high-stakes world of Beltway intrigue via newbie hire Quinn Perkins (Katie Lowes), who doesn’t quite realize she’s being hired in the opening scene with Wright — which unfolds at warp speed.

“Dirtymartini.Whatdoyoumeanthisisajobinterview?” answers Perkins. (This opening sets up what turns out to be a problem in the pilot, as the rat-a-tat-tat cadence means most of the characters have similar voices. Hopefully, they will become more distinct as the actors inhabit the roles.)

Quinn is the viewer stand-in, getting up to speed right alongside us as OPA takes on the case of a decorated war hero who becomes a murder suspect and is asked by the president (Tony Goldwyn) to quash a rumor about a liaison between himself and a young White House aide (Liza Weil) before it hits the press.

While there are bouts of facile speechifying, some of the twists are predictable, and the plot gears are greased a little too easily in the pilot — the various OPA employees know, and have dirt on, everyone from cops and mobsters to politicians and reporters — it’s a satisfying, fast-paced, well-acted hour with flashes of humor.

(One scene also answers the eternal TV question: Who pins all of those photos, clippings, and index cards on the “wall of clues” that inevitably materialize on shows like this? No spoilers!)

Inspired by the life of Judy Smith, a crisis manager and former deputy press secretary to President George H.W. Bush who also serves as co-executive producer, Rhimes should have no shortage of material to keep viewers interested in the secrets of “Scandal.”