For ‘Mad Men,’ change is in the air 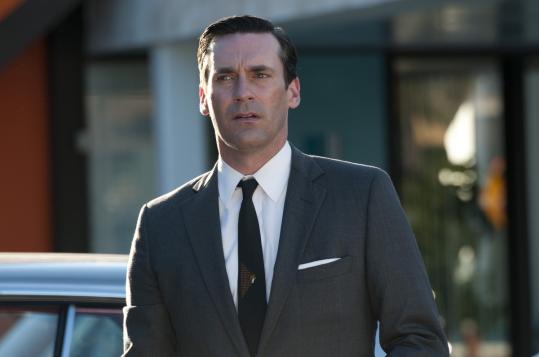 The finale of season four of AMC’s “Mad Men’’ was called “Tomorrowland.’’

The first episode of season five, an extremely satisfying two-hour edition premiering Sunday night at 9, is called “A Little Kiss.’’

There is so much promise in those titles, of bright futures and exciting new beginnings.

It is a crossroads at which the series’ lead character, ad man Don Draper (Jon Hamm), has found himself before, and always managed to navigate.

Change is definitely in the air for all of the employees of Sterling Cooper Draper Pryce - and the world around them - but the past won’t let go of any of them so easily. Whether it comes in the form of lovers, clients, identities, or ideals, the shadows linger and the characters alternately cling to them and shoo them away.

While 17 months have passed for viewers, the time jump on the show is not as dramatic.

The episode, written by series creator Matthew Weiner, is a model of efficiency and nuance.

It brings us up to speed with almost every major character (except Betty) in ways that bear no resemblance to bland exposition. Instead, puzzle pieces are dropped for assembly by the critically acclaimed show’s devoted fan base: ages of children, lengths of maternity leaves and hemlines, the composition of people and signs on picket lines, milestone birthdays, and casual mentions of the status of relationships are all there to help calculate where in the ’60s we have landed. It’s the kind of fun, dramatic math at which “Mad Men’’ excels, going for the implicit rather than the explicit in service of character and story.

Of course, some things never change. Roger Sterling (John Slattery) continues to be the chief source of bitter comic relief with his cynical cheer. Lane Pryce (Jared Harris) remains much more than the befuddled fussbudget he appears to be to his colleagues. Joan Harris (Christina Hendricks) may be feeling cracks in her stoic facade, but her steely sense of self and self-preservation remain strong. And Peggy Olson (Elisabeth Moss) and Pete Campbell (Vincent Kartheiser) thrive in the office but are still feeling their way outside of it.

(As for the absence of Betty Francis, January Jones’s pregnancy created some challenges but Weiner says she will be featured throughout the season.)

Potential themes that can be teased out from the premiere - without giving away anything for the spoiler-averse - are the growing cultural and political divides between generations, a pervasive restlessness of spirit, and the continued search for a settled sense of satisfaction.

That last, of course, applies to everyone, but especially to Draper, who remains a captivating portrait of confusion, who has us careening between rooting for his happiness - even if he doesn’t know what that means - and recoiling from his sometimes despicable behavior.

One minute we’re horrified at his complete disregard for the feelings of those he ostensibly loves, the next we’re surprised by his romantic if reckless proposal to his secretary, and the next mesmerized by the observational gifts that allow him to succeed at distilling what people want.

Part of the attraction - aside from the fact that he comes packaged looking like Jon Hamm - is the promise of the rewrite. Who doesn’t long to shed at least some element of the past nipping at their heels like a yapping dog, reminding them of bad choices: of words, partners, clothes. Draper is not only a self-made man - rising to affluence and power from grinding poverty and helplessness - but a self re-made man, shrugging off the painful identity of his youth and imprinting his desires on a new one.

And here he is in season five, perhaps rewriting himself yet again - with an uncharacteristic spring in his step that has a ripple effect on everyone around him - feeling the friction and promise of the next chapter.

Is it the beginning of a bright future or another path to self-destruction? After such a long wait, it feels like a luxury to have the whole season to find out just how a change is gonna come.