Two sitcoms try too hard for laughs (and mostly fail) 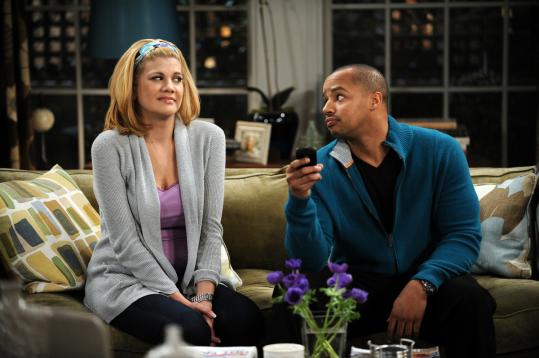 Above: Kristen Johnston and Donald Faison in TV Land’s “The Exes.’’ Below: Katie Finneran (left) and Jaime Pressly in “I Hate My Teenage Daughter,’’ on Fox. (tv land (above); greg gayne/fox (below))
By Matthew Gilbert Globe Staff / November 30, 2011
Text size – +

Some sitcoms are very sitcomy. They’re too loud, too stuffed with one-liners, too obviously set on a soundstage, too farcical. They’re overly brightly lit, overly caricature-filled, overly guffawed at by studio audiences, overly sweetened by laugh tracks. And usually, toward the end of the half-hours, during which the actors have veered into pantomime and vaudeville, they go for a sentimental “aww’’ moment that rings absurdly hollow.

Sitcomy sitcoms are too everything, and yet, at times, they can be oddly comforting. Not only are they throwbacks to the simpler times of “I Love Lucy,’’ but they ask nothing of you except to submit to a barrage of easy jokes. They are like the old school stand-up comics who rat-a-tat insults and puns, as opposed to those who rely more on a humorously twisted attitude and philosophy. You just sit and groan at them, punctuated by a lucky giggle every so often. I don’t often recommend sitcomy sitcoms, but I know that they have a place in the TV universe, for those moments when you want to dumb down and zone out.

Two shamelessly sitcomy sitcoms are premiering tonight, right in the middle of TV’s mid-holiday no man’s land. Both Fox’s “I Hate My Teenage Daughter’’ and TV Land’s “The Exes’’ are aggressively mediocre, as they Nerf-bat you over the head with expected jokes and predictable situations. And neither is likely to find its way onto your DVR season pass. But only one of them is appropriate for those brainless moments; the other is a headache with commercials.

The more tolerable show is “The Exes,’’ which premieres at 10:30 tonight after “Hot in Cleveland.’’ Like “Hot in Cleveland,’’ it is a rickety vehicle in which a talented and extroverted cast of stars from old sitcoms can dance around the stage and mug for the camera. Kristen Johnston from “3rd Rock From the Sun’’ plays Holly, a divorce lawyer who rents an apartment to three of her divorced male clients. They are Donald Faison from “Scrubs,’’ Wayne Knight from “Seinfeld,’’ and David Alan Basche from a number of quickly canceled comedies including “Three Sisters.’’ She’s their mother hen, trying to help them recover from their breakups; they are her knights in shining armor, when the occasion merits.

The premise mixes up odd-couple roommate shtick with romantic humor, as the guys clash with one another and date women. Faison, who was under-acknowledged for his work on “Scrubs,’’ is the ladies man who needs his boundaries, and Basche is the clingy roommate who gets on his nerves. Knight just sits around buying and trading on his laptop, chiming in with zingers on occasion. All of these actors are pros when it comes to timing, moving quickly past the worst jokes before you realize how bad they are. “You’re like my ex-wife,’’ Faison says to Basche, “but without the expensive breasts.’’ Aaaand next . . .

Because it’s on TV Land, “The Exes’’ never really tries to be young. “I Hate My Teenage Daughter,’’ on the other hand, is about horribly spoiled teenagers, and it has lots of texting gags and mean-girl attitude. The painfully shrill show, which premieres tonight at 9:30 on Channel 25, is about divorced mothers and best friends who were outcasts in high school. Now they are trying to raise their obnoxious daughters, who are just like the girls who abused them in the old days.

Jaime Pressly from “My Name Is Earl’’ is Annie, who was raised in a religious household and knows nothing about pop culture. Katie Finneran is Nikki, a neurotic with food issues who is often seen shoving sweets in her mouth or literally pressing her face into an entire pie. Next-door neighbors, they commiserate daily about Sophie (Kristi Lauren) and Mackenzie (Aisha Dee), who, in the premiere, have locked a boy in a wheelchair in the ladies’ room at school. Should the moms ground their daughters? They are afraid to, just as they were afraid of the bullies in high school.

Pressly and Finneran have fun, but they are required to be too broadly comic even for the sitcomy sitcom atmosphere. And the rest of the cast is limited, particularly the bland actresses who play the daughters. When you compare them with the kids on “Modern Family’’ and “Suburgatory,’’ you can see they bring very little to the table. They get an F as queen bees.