“Fabric of the Cosmos” takes us on a fantastic tour in a new, four-part series 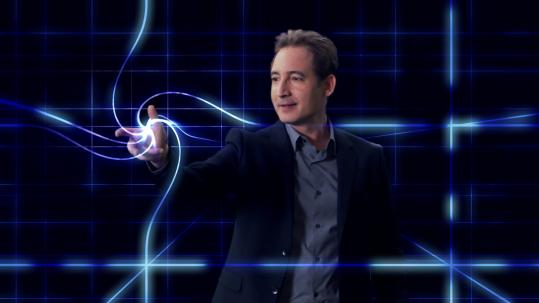 Aided by computer animation, physicist Brian Greene explores the frontiers of space, time, and the universe in “The Fabric of the Cosmos.’’ (WGBH)
By Carolyn Y. Johnson Globe Staff / November 2, 2011

MIT physicist Alan Guth made a profound insight into the very first moments of the universe more than three decades ago, when he was just a junior scientist. Working late into the night, he came up with a new explanation for the initial, rapid expansion of the universe. He scrawled a note at the end of his careful calculations and drew a box around it: “spectacular realization.’’ In recent years that insight, along with other work, has led modern physics to a provocative, and hotly debated, interpretation of reality: Our universe is just one among many. There are not only other universes out there - in those other universes, there are other versions of us, each going about their own lives.

This mind-boggling, controversial idea is just one of the ideas presented through a combination of storytelling, clever video editing, and computer animation in a new, four-part “Nova’’ series, “The Fabric of the Cosmos,’’ that kicks off tonight on Channel 2 at 9 p.m. The series, based on the book of the same name by Columbia University physicist Brian Greene, zooms in on a different topic in each episode. Tonight’s show deals with the nature of space itself. Then, Greene takes us on an increasingly weird tour, digging into time before zooming into the tiniest quantum realm, where the rules of nature get freaky. The final episode highlights the strangest idea yet - that there are multiple universes out there.

In the world of popularizing science, this series is a big, splashy event. Greene, a veteran popularizer of science, has experience in ably demystifying very complicated physics for a general audience. A natural showman, he’s aided in the series by top-notch computer animation and a cadre of top scientists, who help him introduce everything from Einstein’s initial insights into the nature of space and time, to the discovery that won the Nobel prize in physics this year - the surprising and initially hard-to-swallow finding that the universe’s expansion is speeding up.

The show is teeming with easy-to-grasp analogies that strip away most of what people find hard about science, with physicists not only explaining ideas, but also why they are exciting, delightful, or strange. Tonight’s episode in particular ends on an unsettling note, bringing up the possibility that our world, our reality, is merely a holographic projection.

The most exciting moments come when Greene takes us to the edge of modern physics, to debates that are still unfolding. The most human come when the physicists are left to tell their own stories, providing a glimpse of how big, daunting ideas came to be. For example, Peter Higgs, an English physicist, recalls the anxiety he felt several decades ago, when he pulled over to the side of the highway before giving a talk because he was anxious about how his idea would play with the esteemed audience.

The series is a beautiful demonstration of how exciting ideas - even complicated ones with no practical application - can powerfully capture the imagination of virtually anyone. In its effort to appeal to people of all ages and backgrounds, there are elements that can verge on silly - setting a particular scene in an art museum, night club, or Albert’s (as in Einstein) Diner. The computer animation plays a much-needed explanatory role, but at times, it can also seem like a crutch. Ethereal universes and galaxies seem always to be streaming by. But what verges on cheesy to one viewer is most likely the visual hook or clue that will help ease people - including younger viewers, or people who may find the topic daunting - over the hump of watching a four-hour show about physics.

The show is a delight, especially at a time when science is often portrayed as something that must be immediately useful. Certainly many scientists are motivated by big, practical goals, such as the urge to cure cancer or to halt global warming. But the truth is it’s often a long and uncertain path from basic research to breakthroughs. What this series puts on fine display is that basic science itself is wonderfully exciting and profound, and understanding the quirky structure of the universe is a thrill - even to us spectators.

NOVA: The Fabric of the Cosmos