New ‘Rosie’ picks up where old one left off 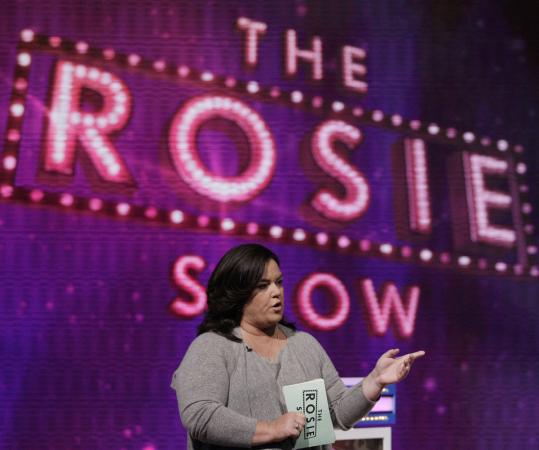 In the monologue of her first show, Rosie O’Donnell praised her new boss Oprah Winfrey and hoped she wouldn’t do anything to upset the Mighty O. (Nam Y. Huh/Associated Press)
By Sarah Rodman Globe Staff / October 11, 2011

Rosie O’Donnell returned to the talk show circuit last night with the first installment of “The Rosie Show’’ her nightly chatfest on Oprah Winfrey’s OWN channel and, in terms of her own comfort level, it was as if she had never left.

For a veteran of stage, film, and television - including her successful eponymous 1996-2002 talk show and her more contentious tenure on “The View’’ - it comes as little surprise that the first “Rosie’’ had a built-in comfort factor.

Although inaugural guest Russell Brand comes with his own peculiar rhythms, O’Donnell, clearly a fan, rolled with the saucy British comic-actor’s mix of merriment, mischief, and musings on capitalism, addiction, and fame which he called “a glistening, golden prison of nothingness.’’ (Depending on your viewpoint, it was either refreshing or perplexing that O’Donnell did not ask a single question about Brand’s wife, pop star Katy Perry.)

Otherwise, O’Donnell pretty much did all of the things for which her original show was known minus the Koosh balls. From the Chicago studio where Winfrey taped her recently retired show, O’Donnell kicked off with a stand-up style monologue that was strong on ease but short on real laughs - her Penny Marshall impression, again? - engaged the audience in a Q&A, did a little song-and-dance number, jawed with Brand, and closed it with a game show segment.

Prior to the premiere O’Donnell had said that she hoped to go deeper with her celebrity guests beyond the normal movie/book/album promo and in the first show that meant a lovely taped segment of Brand visiting a facility that supports women on the road to recovery from substance abuse.

During her monologue O’Donnell gave thanks and praise to new boss Winfrey and expressed the hope that she not doing anything to upset the Mighty O, especially since the first show aired live. When Winfrey emerged in a shower of confetti at the hour’s end, she probably was being sincere when she was seen telling O’Donnell she was “very good.’’

Winfrey had said that she wanted O’Donnell to be herself, and her new hire lived up to that expectation with perfectly familiar results. Whether that familiarity will translate into viewers seeking out OWN will probably require a little more sizzle as “The Rosie Show’’ moves forward.