'Gentleman' mans up by dumbing down 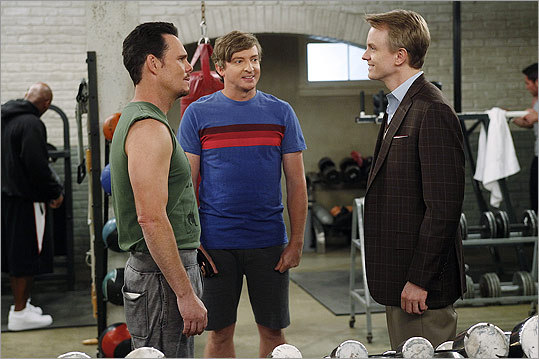 From left: Kevin Dillon, Rhys Darby, and David Hornsby star in the new CBS sitcom "How to Be a Gentleman." (Greg Gayne/CBS)
By Matthew Gilbert Globe Staff / September 29, 2011

If you’re writing a thesis paper on men’s roles in American culture, don’t miss “How to Be a Gentleman.’’ The new CBS sitcom revolves around two prominent male types, the prissy gentleman obsessed with manners and the boorish Neanderthal dude’s dude (played by Kevin Dillon, who was Johnny Drama on “Entourage’’).

However, you’ll want to include the show in your paper’s historical overview, because “How to Be a Gentleman’’ is remarkably dated. Premiering tonight at 8:30 on Channel 4, it depicts masculinity in the way “The Odd Couple’’ did in the 1960s and ’70s, with the persnickety Felix and the slobby Oscar locking horns. And it will be joined by two other stubbornly simplistic sitcom takes on men in the next few weeks - Tim Allen’s “Last Man Standing’’ and the bromantic “Man Up!’’ Has no one told the writers of these shows that being a dumbo who talks down to women is no longer every man’s greatest wish?

If you’re not watching “How to Be a Gentleman’’ for a master’s paper, you might want to think twice about watching it at all. While the lead-in “The Big Bang Theory’’ at 8 celebrates uniqueness, this show is all about fitting the mold. At the end of tonight’s pilot, the Oscar punches the Felix on the arm. Why? “You were being you,’’ the Oscar says to the Felix; “We’ll fix that.’’

Here’s the premise: David Hornsby from “It’s Always Sunny in Philadelphia’’ is Andrew, an etiquette columnist whose magazine is now courting a younger male audience. “They want to expand the readership by targeting people who don’t read,’’ says his editor, played by Dave Foley from “Kids in the Hall.’’ So Andrew reconnects with his high school classmate, Dillon’s Bert, a butch gym trainer who is going to school him on the ways of being more masculine. “You know everything about being a gentleman, and nothing about being a man,’’ Bert tells Andrew in a burst of supposed wisdom. So they hang out together and get into predictable fixes.

There’s a cluster of talent on the show, with Foley and Rhys Darby, who was unforgettable as Murray the agent on “Flight of the Conchords.’’ Whenever Darby is on screen, the show picks up. And Mary Lynn Rajskub, who was Chloe - a.k.a. Dammit Chloe - on “24,’’ has moments as Andrew’s callous sister. But they’re all enslaved by a script that goes exactly where you expect it to go, and unimaginatively so. Also, Dillon is exhausting, playing another version of Drama. Only now he’s a weight trainer who is a major dumbbell.

HOW TO BE A GENTLEMAN