‘Terra Nova’ should mine present instead of past 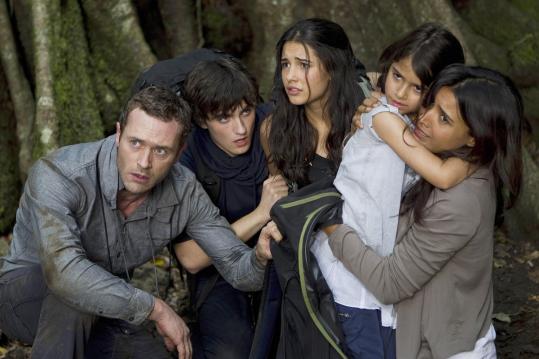 Sometimes sci-fi TV pilots are like the first acts of a movie. The “FlashForward’’ pilot would have made a great little thriller, with a second hour answering the questions raised by the first. Ditto for “Heroes,’’ Taye Diggs’s “Day Break,’’ “Doll House,’’ and “The Event.’’ They were feature-length ideas, or maybe even more fitting for a half-hour episode of Rod Serling’s “Twilight Zone.’’ Occasionally, as with “Lost,’’ “Star Trek,’’ and “The X Files,’’ a sci-fi pilot actually has enough storytelling promise to stretch across weeks and years, but that’s the exception.

“Terra Nova’’? Maybe it should have been a movie. By the end of tonight’s epic two-hour premiere, at 8 on Channel 25, I’d seen enough people running from CGI dinosaurs to last me another few years. The “Terra Nova’’ pilot isn’t exactly a boring piece of TV action-adventure, but I also had no strong desire to return. It feels like it ought to be a one-off. The show tries to recall Steven Spielberg’s mid-1990s moment, when watching sweet brachiosauruses and brutal velociraptors still seemed a little mind-blowing. But now, those busy “Jurassic Park’’ digi-saurs, with their predictably amped-up roars, are passe and tiresome.

But the deeper problem with “Terra Nova’’ as a TV series is, of course, the humans. This is a show built with types, so that almost everyone in the ensemble is too EZ-to-read and knowable - the rebellious one, the brave one, the suspicious one, etc. There’s not much personality mystery afoot. The story focuses on the Shannon family, headed up by ex-cop Jim (Jason O’Mara) and his surgeon wife, Elisabeth (Shelley Conn). They are perfectly loving parents, whose kids are lovely, although teen son Josh (Landon Liboiron) develops textbook authority issues with his dad. In fact, they’re dull, with O’Mara - who held the center nicely in “Life on Mars’’ - bringing a bit of distinction to what might otherwise be a generic action-dad role.

The Shannons live in the grim, polluted world of 2149, where people must wear masks outside and can have only two children. They get busted with three, and, through a series of twists, they join the pioneers being sent back to prehistory to remake civilization. They land in the glorious settlement known as Terra Nova, which is led by Commander Nathaniel Taylor (Stephen Lang from “Avatar’’). Outside the walls of Terra Nova, there be dinosaurs. Also threatening: A group called the Sixers, who are attacking the settlers for mysterious reasons. But inside, it’s all promise.

The show has the potential to tap into today’s social climate - both dissatisfaction with the world as it is and hope for a second chance. “Terra Nova’’ could speak to a country at the juncture of another election, to the anxieties and liberations of the Arab spring, to the frustration over global warming. They’re all folded into the premise, as the Commander tells the settlers, “Together, we are at the dawn of a new civilization.’’ Will these citizens be led by the Commander to change the future? Or will they fracture into warring factions?

But none of the themes much matter if we don’t care about the central characters. And by the end of the premiere, I didn’t. “Terra Nova’’ is a show that seems inevitable at a time when HDTV and giant TV screens are begging for dynamic visuals. But the writing needs to make sure the human drama is vital and distinctive. Behind all the paradisiacal settings and stomping monsters, we all want to find a Mr. Spock, perhaps. Or at least a Hurley, or a Locke.