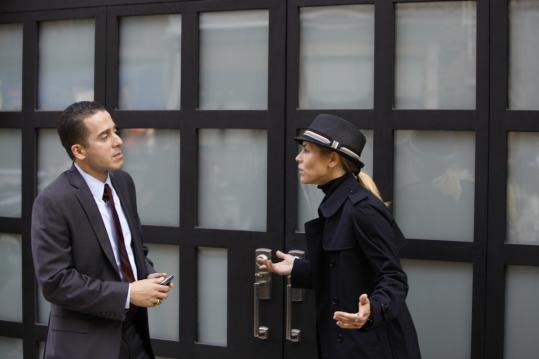 ‘Prime Suspect’’ is more like “The Closer’’ than it is like the British “Prime Suspect’’ that inspired its creation. The new NBC drama, premiering tonight at 10 on Channel 7, is related to the British Helen Mirren series in name only. Maria Bello brings an entirely different energy to the badge than Mirren; her Jane Timoney is more extroverted, tough-talking, and wry than Mirren’s fascinating, controlled Jane Tennison.

And that’s just fine. There’s no reason Bello shouldn’t make the part her own, especially since the action has been moved to New York City. She has created a wily, reckless persona who is stubbornly driven to solve murder cases regardless of the sexist oppression by her colleagues. In her precinct, the male detectives - the “beef trust’’ - do shots of whiskey in jelly glasses and keep the best cases for themselves. But she’s unstoppable, even after her colleagues have called her an “arrogant, opportunistic whore’’ and asked “You ever worry that someone might drop a house on you?’’ before the end of tonight’s hour.

Jane does let her guard down briefly with her contractor boyfriend, Matt, played by Kenny Johnson from “Sons of Anarchy’’ and “The Shield.’’ In one scene, she cries with him, after a particularly brutal verbal attack at the office. But “Prime Suspect’’ and Bello never really force our sympathy for Jane. She is abrasive, there’s no denying it. Next to the likes of Angie Harmon on “Rizzoli & Isles,’’ she’s a jagged iceberg.

Developed by Alexandra Cunningham and Lynda La Plante, the show doesn’t reach the heights of the British original, which doubled as a dark character study and an anatomy of criminal intent. To do that, the “Prime Suspect’’ remake would probably need to be on cable. But it is a solid weekly procedural, with a bevy of strong performers in addition to Bello. Brian F. O’Byrne, who was excellent in “Brotherhood,’’ is fierce as a foe of Jane’s on the force (especially once O’Byrne gives up his Irish accent early in the show). He refuses to undercut his hatred of Jane with sentimentality. Aidan Quinn is both calm and explosive as the lieutenant, who respects Jane’s work, if not Jane herself. And, as Jane’s father, Peter Gerety shows us exactly where Jane gets her stubbornness - and her smoking habit.

“The Closer’’ really flourished once the sexism issue was put to rest. On the British “Prime Suspect,’’ the drama turned more toward Jane’s self-destruction rather than the threats coming from the men around her. I’m hoping that the gender-in-the-workplace issues on NBC’s adaptation will also subside, if only because the theme will wear thin along the course of 22-episode seasons. It’s already tired by the end of tonight’s premiere. That said, the show has a strong lead character and a good intensity, prime reasons to return for a second episode.