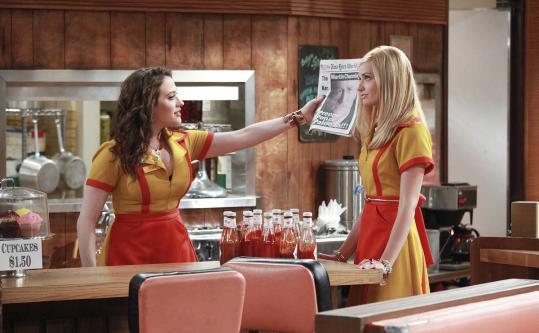 This is the kind of two-faced pilot that makes me cross-eyed. On the one hand, some of “2 Broke Girls’’ is awful, and I mean bottom-of-the-bottom-of-the-sitcom-barrel awful, with rancid sex jokes, ethnic cliches involving Asians, Russians, and blacks, and a persistent laugh track of angry goats bleating.

The two lead characters, waitresses at Brooklyn’s Williamsburg diner, are a ridiculously broad odd couple, with Kat Dennings’s Max as the street-smart hot-head and Beth Behrs’s Caroline as the entitled blonde who looks and sounds like Paris Hilton. They bat insults back and forth like a pair of “Real Housewives’’ wearing aprons and pencils tucked behind their ears.

And then, at some point after Caroline accidentally uses her pink taser on Max, “2 Broke Girls’’ pulls a big fat U-ey. The show, which premieres tonight at 9:30 on Channel 4, changes tone midway and becomes a pleasingly warm comedy about two women against the world. The multi-camera stylings remain in place - the overly lit stage sets, the one-liners, the laugh track - but the characters stop bickering and make beautiful music together. Max and Caroline are still opposites, but they join forces to start a cupcake business and work their way out of their financial rut. They find strength in each other, and so does the show.

The actresses become so much more appealing once the show, from Michael Patrick King of “Sex and the City’’ and Whitney Cummings, softens up. Caroline is the daughter of a billionaire who got caught running a Ponzi scheme and lost his own and many others’ fortunes. She’s on her own for the first time, and Behr succeeds in making her sympathetic but never pitiful, even when she has to sleep in the subway.

But the pilot belongs to Dennings, who commands the screen from the get-go, even when the material is beneath her. She looks like Gwen Stefani, intimidating everyone she possibly can, but she’s got a heart worth winning over. In what will, I hope, be a regular subplot, Max has a second job nannying for a wealthy, helpless Manhattanite with twins. A diva out on the order of Rachel Zoe, with a touch of Karen from “Will & Grace,’’ the mother hates to touch her kids or change their diapers, noting, when Max shows up, “There’s a bridge and tunnel over by the babies that’s stressing me out.’’

The socioeconomic-based plots ground the frivolousness of some of the humor. “2 Broke Girls’’ offers a little bit of recession hope, as the ladies turn their frustrations away from each other and toward a productive goal. Of course, next week’s episode - which will air in the show’s regular timeslot of 8:30 p.m. - might find them back in the boxing ring, crudely duking it out with bad jokes. If that turns out to be the case, “2 Broke Girls’’ just might be unfixable.