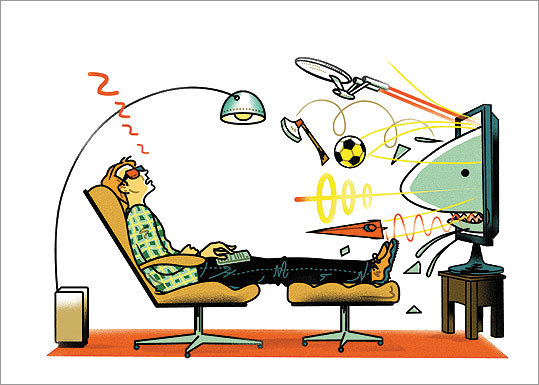 As a kid, I fantasized about a brain implant that would bring me any TV show I wanted, whenever I wanted, wherever I was. All I’d need to do was think of the title, then blink, and it would play out in mind-blowing detail before my eyes - “The Brady Bunch,’’ “Knots Landing,’’ “The Addams Family,’’ all just like reality, almost touchable.

I’m still waiting to realize my dream of eating my way out of a room of ice cream, but the TV dream is crossing our doorstep. Our delivery systems are so flexible now, you can see the dark-night-of-the-soul drama “Breaking Bad’’ at its optimal hour - 4 a.m. - and you can watch “Game of Thrones’’ on the throne. Our HDTV screens are gigantic and eye-poppingly sharp and vivid, and our sound systems are almost movie-theater quality. We’ve graduated to an advanced level of home entertainment.

But when it comes to dimensionality, well, we’re still in nursery school, because 3-D TV in 2011 is a bit of a joke, one that you’ve paid a lot of money to be told in your own living room.

A friend recently bought a gorgeous Samsung 55-inch 3-D television and invited me over for a few hours of sampling. The hospitality? A+. The entertainment? D-. Sitting with battery-operated 3-D glasses on, we watched selections available on the two 3-D channels and on the 3-D On Demand option, including dated sports events and Tim Burton’s “Alice in Wonderland.’’ It was one long exercise in dissatisfaction - uncommon nonsense, as the Mock Turtle puts it.

I’d been hankering to check out home 3-D. Since “Avatar’’ dropped in 2009, the 3-D promise has reared its head once again, having been a recurring fad in theaters over the past six decades since the first craze in the early 1950s with movies such as “It Came From Outer Space.’’ There are those who believe 3-D TV will become the new norm in home entertainment, the next HDTV; and if you go to a store and sample a 3-D TV, or if you’re able to attend the annual Consumer Electronics Show in Las Vegas, you may feel the fever.

But after a few hours watching basketballs come out of the screen and animated plants receding behind it, I was weary. “It’s a technology that demos very well,’’ says David Katzmaier, senior editor of home theater at CNET. “But it’s not the kind of thing that HDTV was, or that people initially thought it would be. . . . Even the hardcore techies who’ve seen it don’t express much enthusiasm. It’s not listed high on their considerations when buying a new TV.’’ Steve Safran, Natick-based editor of the website Lost Remote, agrees: “I don’t see 3-D TV ever being a substantial part of our media diet.’’

There are two big drawbacks, both obvious to me as I sat watching a Harlem Globetrotters game.

First, sporting those glasses in the house is an issue, of course, seeing as we’re not rock stars or junkies. That’s old news, the inelegance of the shades - especially if you’re putting them on top of prescription glasses. It may not be overly intrusive to wear them in a dark theater, where human interaction is supposed to be suspended. But wearing 3-D glasses inside, with other people around, is highly unsocial, inhibiting our ability to share the viewing experience - and group viewing is a definitive asset of TV, especially when it comes to sports. In 3-D shades, I can’t even interact online, on my laptop or phone.

If I wanted to half-watch TV while doing something else - many of us fold our laundry, or exercise, or do our homework during prime time - I’d be pulling off my glasses more often than David Caruso on “CSI: Miami.’’ One of the fundamentals of TV’s popularity is that it’s the easiest medium to slip into and out of. Katzmaier says rumors of glasses-free 3-D are greatly exaggerated: “Those are production one-offs that technology blogs are spinning as around-the-corner stuff. They’re years away.’’

The second obvious hitch is the dearth of 3-D programming. Not counting a few theatrical movies available on demand, including “Jackass 3D,’’ I sampled two channels offering plenty of nothing. “The Ultimate Wave Tahiti,’’ “Siegfried & Roy: The Magic Box,’’ a lot of old boxing matches and basketball games, it was all chazari, airing and reairing endlessly. Like the inconvenient glasses, the shortage of shows is the plight of early adopters, those who buy into a technology before it goes mainstream.

“You’ve got a chicken-and-egg thing going on, where the people who are producing the programming want to wait until there’s enough saturation of the market and vice versa,’’ says Safran of Lost Remote. “That was the issue with HDTV. But because of the government mandate that everybody had to switch over to digital TV, it wasn’t as much of a problem. There’s no government mandate on 3-D TV.’’

Ultimately, the more intrinsic problems with 3-D TV will likely preempt any solutions to weak programming and bothersome glasses. What I saw on my friend’s TV was a failed detour in our ongoing cultural drive for stimulation, to be transported by entertainment. While 3-D TV tries to make images more astonishingly realistic, and more like our experience of life, it actually makes them appear more artificial. You can feel the technology straining to evoke live perception, and each time something visually dramatic occurs - a Globetrotter throws a basketball at the camera, or Alice falls down the rabbit hole - you feel that effort even more. You don’t get lost in it; you just become self-consciously aware of the fact that you’re watching 3-D. It isn’t natural enough to suck you in, to fully immerse you.

The 3-D effect is inviting you to compare what you’re seeing to reality, and of course it doesn’t measure up. It’s not a hologram, after all. Maybe that’s why it’s most tolerable when used with animation, which doesn’t pretend to re-create reality in the first place. As Safran points out, 3-D TV isn’t truly 3-D: “It’s a series of two-dimensional layers you’re looking at. So it’s one flat layer on top of another. A flat baseball player in front of a flat crowd behind him. If you change your angle watching a 3D show, you don’t then see the other eye on his head.’’

Dimensionality is not as valuable to viewers as motion and color, says Paul Levinson, author of “New New Media’’ and communication and media studies professor at Fordham University. When it comes to narratives, he says, depth is inessential. “If we’re interacting with someone, the third dimension is important. But when we’re just watching something - when we’re in a restaurant watching other people, for example - motion and color are important, but the third dimension isn’t. In one-way communication, which is essentially what narratives are - we’re just watching it, we’re not going into it or influencing it - then the third dimension is not as significant.’’

For me, there is a reminder in 3-D TV, one that comes with every step forward - or sideways - that we take in TV technology. There is no replacing good writing, good acting, good directing, or a good game. You can’t add depth by adding depth. I’ve developed an attraction to HDTV; it’s oversaturated, but the clarity is compelling. But still, no amount of visual excitement can hide poor storytelling, especially on TV, where long-term narrative is most common. Indeed, one of the things I’ve liked about TV is that, because the screens aren’t as big as theater screens, TV producers can’t depend too heavily on special effects to dazzle.

As a society, we’re always on the trail of the new, especially when it comes to entertainment technology. We want more, and better, now. And that’s why today’s TV technology is so extraordinary. Maybe, we really don’t need 3-D TV on top of it all. Maybe it’s time to relax and enjoy the amazing convenience and visual thrill of our current systems, rather than feeling as though we need to keep trading up for something, anything. Let’s free up all those scientists and researchers, so they can get down to work on something truly important, like, say, building the world’s best-ever room of ice cream.