DOVER, N.H. - There was a time when Pan Am was an icon of sophisticated international travel, the airline of choice for the fast-living Jet Set. Now, the world headquarters of the once-mighty airline is here, in a warehouse toward the back of an industrial park.

There’s still magic in the familiar white and blue logo, with the words “PAN AM’’ set into the center of a globe. That symbol is now the property of Pan Am Brands, a small division of a regional railway company that owns the storied Pan American World Airways name.

The airline was shut down years ago, but it will live again on television. The ABC network will premiere a major prime-time show named for Pan Am in the fall, and Pan Am Brands is poised to take off with it.

The company manufactures Pan Am bags, watches, T-shirts, cufflinks, and other items, including re-creations of the airline’s once-ubiquitous blue and white flight bag. The warehouse is packed with merchandise sporting the Pan Am logo, ready to be shipped to customers around the world.

There is keen awareness here that a hit network show could mean a boom in Pan Am business. “Our hope is that everybody out there understands Pan Am in the way we do, and understands why it’s so much more than an airline,’’ said Stacy Beck, director of brand development at Pan Am Brands.

The ABC series will feature the fictional adventures of a group of glamorous pilots and stewardesses as they jet around the world in the 1960s. People who have seen the pilot episode describe it as a stylized airline version of “Mad Men,’’ the critically acclaimed AMC cable network series that chronicles a New York ad agency in the 1960s. In fact, in one “Mad Men’’ episode, when main character Don Draper and his wife, Betty, traveled to Rome, they made the trip on a Pan Am Clipper.

Pan Am Brands and the producers of the forthcoming ABC show spent more than four years negotiating the licensing agreement that allows the show to use the Pan Am name and logo. Pan Am Brands will receive royalties, but declined to disclose the financial terms.

Beck said it took several years to finalize a deal because the company’s owners “have a strong passion for the name and they want to make sure that it is never damaged or used improperly. It’s Hollywood. We recognize that it is a drama, but we wanted to make sure that overall, the Pan Am story was being told properly.’’

Former Pan Am stewardesses fondly remember the glamour of air travel in the years when flying was a special occasion.

“It was a real event,’’ said Anne Sweeney, a 17-year veteran of Pan Am who handles public relations for World Wings International, a nonprofit charitable group composed of former airline employees. “Everyone dressed up.’’

On board, flight attendants served passengers lobster, roast beef, and crab meat on fine china with sterling silver utensils. “It was very gracious service, even in coach,’’ recalled Carol Guerrin, a former flight attendant from Derry. Guerrin flew with Pan Am from 1970 to 1975, wearing the airline’s elegant blue uniform. “We really stood out,’’ she said. “We wore white gloves and a hat. It was just a very coordinated look.’’

Pan Am’s mystique was a central theme in the 2002 movie “Catch Me If You Can,’’ the story of former con man Frank Abagnale, who as a teenager donned a Pan Am pilot’s uniform to help cash phony checks and to travel the world.

“I did that between 16 and 18, and flew all over the world in the jump seat as a Pan Am pilot,’’ recalled Abagnale, adding that Pan Am had estimated that he flew on more than 250 flights for free. Abagnale’s story inspired filmmaker Steven Spielberg to produce the movie.

“It was a great way to cash checks, because no one would turn down a Pan Am pilot,’’ said Abagnale, now a fraud and forgery consultant in Washington, D.C. “The uniform had an incredible amount of power.’’

Airline deregulation and financial losses eventually combined to bankrupt the airline in 1991. There were several attempts to relaunch the carrier as a small company. It was briefly reborn as a regional discount carrier out of the decommissioned Pease Air Force Base in Portsmouth but stopped service in 1998.

Pan Am Systems, the company in Dover that owns Pan Am Railways, bought what was left of the airline that year. It licenses the airline’s name through the Pan Am Brands division.

Three years ago, the company opened a Pan Am Brands store here. Walking into the company’s headquarters is like visiting a mini-museum, all Pan Am. Model planes sit inside display cases, along with T-shirts and baggage tags. A collectible 1966 Mattel Barbie doll, dressed as a Pan Am flight attendant, poses on a shelf.

The company’s catalog includes 50 products; the best seller is the classic blue and white bag called “The Explorer,’’ which sells for $89.

Beck said sales have increased since news of the TV series broke, but declined to provide figures.

Baba Shetty, chief strategy officer at Hill Holliday, one of Boston’s biggest ad agencies, said that part of Pan Am’s enduring appeal to consumers is that it’s a ghost brand, one that isn’t tethered to an active company.

“Pan Am is kind of frozen in a moment in time in our collective memory,’’ said Shetty. “There is a certain cool in being associated with these brands that once meant so much to people’s lives. You can’t buy air travel on Pan Am, but you can still celebrate that brand by wearing that brand on a T-shirt or bag.’’ 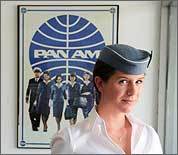