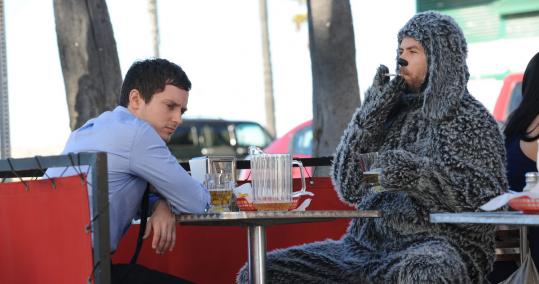 Elijah Wood plays a suicidal man who can converse with his neighbor’s dog, Wilfred. Jason Gann has the title role, as he did in the series he created in Australia. (Michael Becker/FX)
By Matthew Gilbert Globe Staff / June 23, 2011

As the mild-mannered Ryan in “Wilfred,’’ a new comedy from FX, Elijah Wood has spooked eyes. They’re wide open and wary, as if he’s seen a ghost (which he hasn’t) or a man dressed in a tatty dog suit (which he has).

He is the perfect straight man in this offbeat, surreal, crude, and occasionally touching series, which premieres tonight at 10. Wood has the quiet but reactive facial expressiveness of a silent-film actor, as the world grows curiouser and curiouser around him. He’s Alice in Wonderland — in Lala Land, to be precise — with a tie and jacket and a touch of OCD. While everyone else sees his neighbor’s pet as the lovable mutt Wilfred, Ryan sees him as a surly Aussie dude in a cheap, loose-fitting costume. When others hear barking, Ryan hears Wilfred talking, pushing him into risky situations and feeding him bong hits (“Gotta cough to get off,’’ he says).

The premise recalls “Harvey,’’ the 1950 James Stewart movie, as well as this year’s “The Beaver’’ with Mel Gibson, as it chronicles a man’s absurd relationship with an imaginary being who provides him with something profound and redemptive. But on “Wilfred,’’ which is based on Jason Gann’s Australian TV series, the premise has a demographic twist, as the scripts are filled with the kind of coarse humor you’d find on FX’s “It’s Always Sunny in Philadelphia’’ or Fox’s “Family Guy.’’ The show has a nice sense of innocence, thanks to Wood’s gentle performance and the theme of personal transformation; but it is also filled with uneven sexual and scatological jokes, delivered with a dog-like lack of modesty, so viewer be warned. For some, that level of humor is a deal breaker.

When we meet Ryan, he is an introvert trying to kill himself — after perfecting his suicide note. His sister, a high-strung doctor named Kristen (Dorian Brown), has gotten him a job, which he blows off, and he has a crush on Wilfred’s owner, Jenna (Fiona Gubelmann), but he can hardly talk to her. He is in despair.

Along comes Wilfred, played by Gann with a lewd smirk underneath his black plastic nosepiece. Wilfred is like the stoner friend who takes up residence on your couch and proceeds to suck you into his slacker vortex. He has a taste for Matt Damon DVDs, he puffs on cigarettes, and he leers smugly at Ryan when Jenna pets and scratches him. Part of the show’s humor is that the somewhat worldly Wilfred is also compelled to do doggy things — he proudly humps a stuffed animal, he neurotically digs a hole in Ryan’s yard, and he views sniffing butts as a window to the soul. He’s still an animal after all.

And that’s the point. Wilfred isn’t just a therapist, urging Ryan to stand up to his bullying neighbor (guest star Ethan Suplee, refreshingly different from his old role as Randy on “My Name Is Earl’’). Wilfred can smell Ryan’s fear of life. He is trying to help Ryan get more in touch with his animal instinct for good and for ill, to encourage Ryan to do what he wants and needs instead of what others expect of him. Wilfred is obnoxious and unpredictable, and he wants the timid Ryan to be obnoxious and unpredictable sometimes, too.

I can’t say whether “Wilfred’’ will grow thin across the season, after its engaging first three episodes. That depends on whether the writers can stay inventive, and whether the upcoming guest stars, including Ed Helms, Jane Kaczmarek, Carbonell, Dwight Yoakam, and Rashida Jones, will be as amusing as Suplee. Cross your fingers, or, if you prefer, your paws.