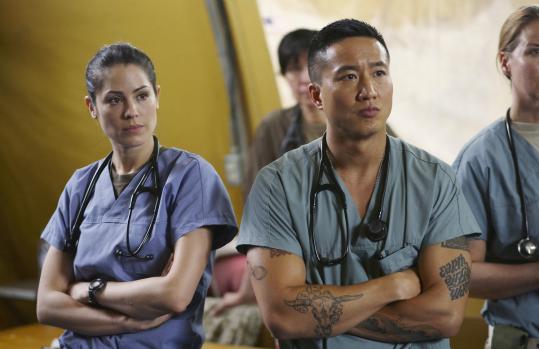 In the closing credits of ABC’s new drama “Combat Hospital,’’ we’re told, “All characters and incidents in this program are fictional.’’

This Canadian-produced summer series, which premieres tonight at 10 on Channel 5, is completely divorced from anything resembling real life. And that’s really unfortunate, seeing as it is a medical drama set in Kandahar, Afghanistan, in 2006. While the premise smacks of the nightly news, the execution is very ABC Family Channel or, to be more generous, “Grey’s Anatomy.’’ Despite the presence of ER traumas, bombings, an injured Taliban leader, and a snake slithering into an operating room, the show still manages to come off like a game of medical make-believe.

The premiere opens with the familiar trope of having rookies arrive at the hospital, which is located near an airfield in Kandahar. Michelle Borth plays Major Rebecca Gordon, a surgeon who’s stressing not because she has just arrived in a war zone, but because she thinks she might be pregnant by her ex-fiance. Captain Bobby Trang, played by Terry Chen, has beginner’s anxiety during his first emergency procedure, although that’s nothing that a very paternal Colonel Xavier Marks can’t fix in a jiffy. Marks is played by Elias Koteas, who looks like he could be Christopher Meloni’s twin.

These doctors, along with an arrogant Brit played by Luke Mably who immediately tries to seduce Rebecca, deal with all the medical-drama cliches. There’s the tough-lovin’ mentor, the competitive colleagues, the moment when the hospital might blow up, and the “M*A*S*H’’ theme of having more injured soldiers descend just at the moment when the doctors thought they could finally relax. Is there some kind of contest among TV writers to see who can cram the most cliches into one pilot episode?

It’s too bad “Combat Hospital’’ is such an uninspired piece of work. The idea of a show set smack in the middle of the war in Afghanistan is exciting and, to some extent, incendiary. This is a war that’s currently under fierce debate, a war that has become something of a partisan ping-pong ball in the endless talk around the withdrawal of troops. A bracing, gritty, and well-written drama diving into the human costs of battle might push some buttons and have some kind of relevance. Instead, “Combat Hospital’’ is as bland and generic as its title.

ABC had modest luck last summer with another similarly limp Canadian drama, “Rookie Blue.’’ These shows, with their amateurish acting and paint-by-numbers writing, are summer filler of the laziest kind. Although I guess they do ultimately serve an important purpose, and that is to remind us to find and appreciate the good TV that is out there.