Network TV is picking up a little espańol

Shows reaching out to Hispanic audiences 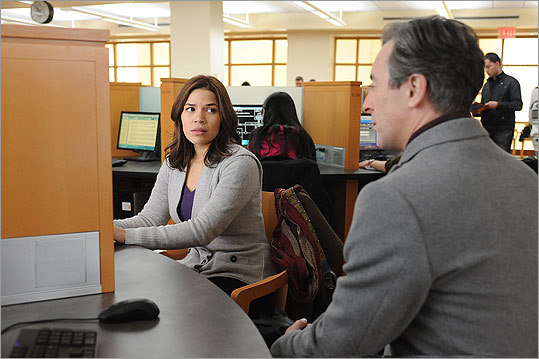 On a recent episode of NBC comedy “30 Rock,’’ Tina Fey’s character held up a book called “Learn Spanish’’ and declared that she would finally learn the language. Later on, as Fey’s character performed community service in a park, she shouted in her novice Spanish, “Estoy hablando con mi amigo!’’

On the legal drama “The Good Wife,’’ America Ferrera’s character recently translated for lawyers during a teleconference call with a fictional Venezuelan president. Viewers followed along with the help of subtitles.

And on ABC’s “Modern Family,’’ actor Sofia Vergara regularly rolls her “r’’s and improvises lines with her native Spanish.

Some of the more popular English-language prime-time network shows this season have declared, “hablamos español!’’

As Latinos have grown into the largest minority in the United States (new census figures report that one in six Americans are Latino), so has the amount of Spanish on television shows trying to appeal to this growing TV audience.

After Mexico, the United States is the world’s second-largest Spanish-speaking country. As the language becomes more widely used in everyday conversation among Americans, Spanish is also becoming more commonly spoken on the networks.

Viewers aren’t just hearing small phrases such as “que sorpresa’’ or “hola amigo!’’ Show writers create dialogue in complete Spanish sentences featured in subtitles or sometimes not translated at all.

“The writers are cognizant of the fact there is a growing Hispanic audience out there. It’s reality,’’ said Alex Nogales, president of the National Hispanic Media Coalition, a Los Angeles-based nonprofit advocacy group that has been pushing the networks to elevate the presence of Latinos on their programs.

Each year, the group reports on the number of Latinos on- and off-camera as actors and writers. Last season, the four major networks had a total of 48 Latino actors as regulars on prime-time shows — almost double the number from 10 years ago.

So as the actors better reflect the US population, they are speaking like them, too.

“The writers are reflecting what they see,’’ said Nogales.

His group hosts an annual TV writers program, cosponsored by ABC and NBC, to help develop Latino writers for current and future shows. Participants spend five weeks producing a script for one half-hour comedy or a one-hour drama in English. So far, more than 15 graduates have landed writing jobs on network shows such as ABC’s “Brothers & Sisters’’ and CBS’s “Criminal Minds.’’

Nogales said that’s helping the networks add a Latino sensibility to their programs.

“We are adding to the writer field, but incrementally it’s a very small number,’’ said Nogales, who estimated there are overall 120 writers per TV network. But he added that the increased use of Spanish on the network “is progress. There is a big bilingual population and the writers are trying to get viewers to cross over to see what their shows are all about.’’

Robert Thompson, professor of TV and popular culture at Syracuse University, said that more Americans have become more comfortable with everyday Spanish and that is seeping into network television.

He credits children’s shows such as “Dora the Explorer’’ and “Go, Diego, Go!’’ for teaching a new generation of young viewers and their parents basic español.

“English-speaking Americans every now and then hear someone else speaking another language such as Spanish and you’re seeing that on television,’’ Thompson said.

In new shows such as the ABC medical drama “Off The Map,’’ the main characters speak Spanish because it makes the setting more realistic. The program follows a group of young doctors in “la ciudad de las estrellas’’ (the city of stars), a small town in a South American jungle that is home to a small, understaffed “clinica.’’ In each episode, doctors and patients switch back and forth between English and Spanish. The more common phrases involve a doctor asking patients, “Te duele algo?’’ which translates as “what hurts?’’

But some older popular shows such as CBS’s “CSI: Miami’’ incorporate Spanish because it adds authenticity to where the characters work and live. Miami has a large Latino population.

Network officials and producers said that having more bilingual actors allows them to put their skills to good use for story lines, which then help deepen characters’ backgrounds.

Earlier this month, NBC’s “Law & Order: SVU’’ featured a Latina nanny praying in Spanish as detectives interviewed her. One of the show’s detectives is played by Mariska Hargitay, who speaks Spanish.

“It’s important to be inclusive. . . . We want it to be as real as possible,’’ said executive producer Neal Baer. “It really helps that she [Hargitay] speaks Spanish,’’ said Baer, noting that Hargitay won an Emmy for best actress in 2006 for an episode called “911’’ in which she spoke Spanish to calm a Honduran girl who had been kidnapped.

Baer said the show will add subtitles so that viewers can follow what the characters are saying. His writers also check with the actors such as Hargitay to make sure the Spanish sounds correct.

“She knows what she’s saying and if it doesn’t sound correct, she tells us,’’ he said. “We were more aware that this country is multilingual and we should be acknowledging that.’’

Over on “Modern Family,’’ show creators modeled a lot of the character of Gloria Delgado-Pritchett after Vergara, the actor who plays Ed O’Neill’s wife. Like Vergara, her character is Colombian and speaks with a strong Spanish accent and has a teenage son named Manny.

Show producers have given Vergara flexibility to improvise her character’s Spanish outbursts and mispronunciations.

“The show itself is presenting a more realistic mosaic of American life today,’’ said Bill Fine, general manager of Boston ABC affiliate WCVB-TV (Channel 5) and chairman of the entertainment committee for ABC Television Affliates Association Board of Governors. “There’s something to it that she’s a Hispanic character on television that has caught on with the public. There is a realism in there that makes people laugh.’’