This is your brain on Bravo

Living to tell the tale of a week of aspirational TV 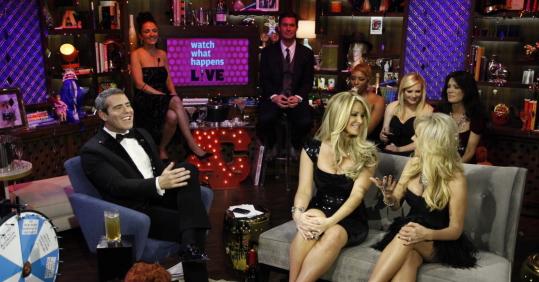 It was Saturday afternoon, and I was watching “Pregnant in Heels,’’ and I was thinking of changing my name to Darren, or Bowen, or Miles — something about to trend, something more auspicious.

Also, while couch-bound and not eating, I decided to hire a gay assistant, a sassy Greek chorus who will primp me, roll his eyes at my quirks, and schedule my appointments. If I’m going to be properly man-scaped, gym-trained, and manicured, I’m going to need staff.

I am a person who needs “people.’’

My Saturday agenda, near the end of a full week of watching Bravo, also included phoning a friend just to start a fight. Without a steady diet of Totally! Major! Betrayals! passive-aggression, and seething jealousy, existence is much too flat. Life isn’t what happens while you’re making other plans, as John Lennon sang; it’s the tension that erupts during benefit galas and garden parties. Social armageddon, I think I love you! What would Bethenny’s 40th birthday party have been on “Bethenny Ever After’’ without her bitterness arc and her last-act explosion? Dead air.

Ah, Bravo. Feed my head. You are a fine drug, a thoroughly Fellini-esque state of consciousness where rubbery lips are glossed to a brilliant sheen, where the brick is exposed and the views are epic, where the hips are narrow, the sternums bony, and the breasts bulbous, where even straight men fit gay stereotypes. You are an escape hatch to a land where Barbies walk, talk, cry, complain, jiggle, delegate, ride in the backs of limos, throw liquids at one another, and have sex with men for five hours with Lady Gaga playing in the background, while the Kens tap at smartphones and write checks.

You so deeply intoxicate me with high fashion, vigilant personal grooming, exquisite cuisine, and multimillion-dollar real estate, Bravo, that I’m beginning to think taxing the rich may actually be a cultural minus.

The thing about Bravo is that, while it’s one of TV’s most decadent channels, along with E!, the home of the Kardashians and “Bridalplasty,’’ it is quite brilliantly conceived and enacted. Bravo is so well branded, the vibe is so consistent, you can stumble across it during almost any one of its original series, from “The Real Housewives of Miami’’ to “Tabatha’s Salon Takeover,’’ and immediately know where you are.

Owned by NBC Universal since 2002, the channel is niche cable at its most precise, putting the similarly focused HGTV and the Travel Channel to shame in its ability to court and seduce affluent and culturally savvy people between 18 and 54. Ever since “Queer Eye for the Straight Guy’’ rocked Bravo out of its performing arts rut in 2003, the channel has been home-growing celebrities, promoting products, prominently featuring Madonna-era gays, and minting catchphrases for people with expendable income. It is a makeover channel that reaches beyond cosmetics and into your lifestyle, into your attitude, into your dreams, and, OMG, into your very way of speaking.

Bravo is built on — buzzword alert — aspirational programming. That is, you watch and you want. You want to be famous for being yourself, like Bethenny; you want a tight face like, well, everyone, but especially Bethenny; you want assistants and limos. You want your baby to be named by a think tank put together by motherhood guru Rosie Pope of “Pregnant in Heels.’’ You want to eat at the restaurants and buy cakes at the bakeries and purchase arrangements from the florists whose signage is featured prominently — and lingered on for at least three seconds — on every show.

Even more than money and style, you want to have enough narcissistic confidence to not care about making a fool of yourself on Bravo, like Camille Grammer on “The Real Housewives of Beverly Hills.’’ You want to have your own publicist.

The atmosphere of the channel is peppy, ironic, and gossipy down the line. Except for James Lipton’s “Inside the Actors Studio,’’ that hangover from the old days that provides celebrities promoting their new movies with One More Gig, every Bravo show plows ahead like a hyper-chatty acquaintance. Bravo editors must be forbidden to linger on any single camera angle for more than four seconds. Cut to a fast-motion urbanscape, cut to Kim Richards talking on “The Real Housewives of Beverly Hills,’’ cut to Kyle Richards’s reaction, cut to a different perspective on Kyle’s reaction, cut to Lisa VanderPump’s dog, Giggy, cut to the outside of the mansion, cut to, cut to. The only time a beat lasts longer than four seconds is when an insult has been hurled; then the editors are permitted to insert a good five seconds of stunned stillness. The Bravo factory is a top-notch manufacturer of big dramatic moments.

And throughout, the soundtrack adds musical commentary like a little meddling bird, from whimsical tiptoe sounds to the mid-tempo jog.

The network’s mantra is “Don’t give them time to think,’’ so the shows often air in little marathons. Once you get sucked into “Million Dollar Listing,’’ you’re there for a few hours, while the battling realtors make their massive commissions and multi-multimillionaires dicker over a few hundred thousand dollars. Previews of forthcoming scenes of hostility and absurdity pull you through the commercials, some of which adopt the same shiny look as the network.

And presiding over it all is Andy Cohen, host of the talk show “Watch What Happens Live,’’ cast-reunion overseer, and executive vice president of original programming and development at Bravo. Beautifully exfoliated, teeth whiter than white, Cohen knows way too much about each of the “Real Housewives’’ and their men. His thick brow can shift seamlessly from grave to wry to completely dishy as he stirs conversation and argument. He is the channel’s Merv Griffin, the grand marshal of Bravo’s too-busy, excessive, materialistic, addictive programming parade.

And now you must excuse me, as I finish a bunch of old “Rachel Zoe Project’’ episodes and get dressed for another best party ever. My mask is cracking, and it’s time to go rinse.