A good, if familiar, start for ‘Endings’ 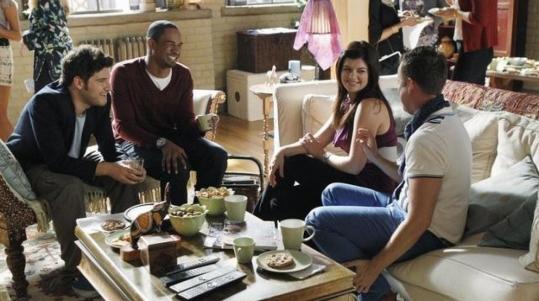 There is so much scorn and disapproval to be heaped on “Happy Endings,’’ ABC’s new ensemble sitcom. It is too obviously modeled on “Friends’’ — about a decade after the fact. Six impossibly close friends? A high-ceilinged, quirkily furnished apartment with exposed brick? A chronically on-and-off romantic pair? Check, check, and check.

Plus, “Happy Endings’’ arrives amid a group of similar post-“Friends’’ sitcoms that all thrive on dating woes and the kind of hyper-idiomatic repartee that flourishes on Bravo. With the shows “Perfect Couples,’’ “Better With You,’’ “Rules of Engagement,’’ “Traffic Light,’’ and “Mad Love’’ already flocking prime time, who needs “Happy Endings,’’ whose first two episodes premiere tonight at 9:30 on Channel 5?

And yet, despite the fact that it’s a clone lacking in conceptual originality, despite its cliched situations involving too-needy women and emotionally phobic men, I like this show. ABC sent four episodes, and I found my resistance to “Happy Endings’’ fading with each half-hour. The pilot is a forced effort to introduce the characters and set up the romantic tension that will run the course of the series, as Alex (Elisha Cuthbert) leaves Dave (Zachary Knighton) at the altar in a “Graduate’’-like scene. The characters, who live in Chicago, all seem too familiar. But by the fourth episode, called “Mein Coming Out,’’ the show has grown truly funny and the characters have become distinctive, as a coming-out subplot and a Hitler subplot crash into each other.

Turns out “Happy Endings’’ is one of those rare TV cases of rising above, as the writing and the ensemble energy trump the stale premise. Cuthbert, who was the dreaded and oft-imperiled Kim on “24,’’ is mostly in the background of the show, as the other more comically loose players take over — although the writers, including creator David Caspe, do give Cuthbert a “24’’ joke about Kim’s cougar face-off. Adam Pally stands out as Max, the gay friend who, beginning in the second episode, is definitely not the gay stereotype TV too often resorts to. Penny (Casey Wilson, from “Saturday Night Live’’) wants the sluggish Max to be the Will to her Grace, but he’s not on the same page.

She: “You’re a straight dude who likes dudes. I want a gay who’ll watch house-flipping shows with me and grab my boobs in a platonic way.’’

He: “So you want a stereotypically flamboyant, cartoonish, ‘Sex and the City’ gay? It’s offensive.’’

She: “The heart wants what the heart wants.’’ Penny gets her gay in one episode, but he’s a little more — and less — than she bargained for.

Brad (Damon Wayans Jr.) and his wife, Jane (Eliza Coupe), are the other two members of the group. He is black, which helps distinguish “Happy Endings’’ a bit more from “Friends,’’ which was short on people of color. He is a metrosexual who knows way too much about exfoliation, and she is a control freak. Their chemistry is unexpected and natural, and appealingly self-aware jokes are made about how Jane needed to come out to her parents about falling in love with a black man. Wayans looks like his father, but he comes across here as more restrained.

On the best ensemble sitcoms, including “How I Met Your Mother’’ and “Modern Family,’’ writers and actors seem to have a nice give-and-take as they develop characters across a first season. Let’s hope that that kind of happy gelling happens on “Happy Endings,’’ that the show’s clone origins become a distant memory.