Global crises cause rise in audiences for local media outlets 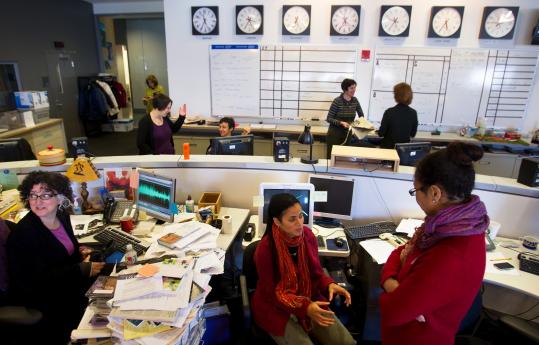 Natural and nuclear disasters in Japan. The brink of civil war in Libya. The peaceful overthrow of the Egyptian dictatorship. Add soaring oil prices and gyrating global markets, and what a year it has been for foreign news.

It’s also been a good year, at least so far, for local media outlets specializing in international journalism. Their audiences are surging. The Christian Science Monitor, with 200 correspondents around the world, said page views on its website have doubled from a year ago. GlobalPost.com, a two-year-old international news start-up in Boston, said its Web traffic is at record levels, with both its page views and unique visitors more than doubling from a year ago.

“The World,’’ a radio program coproduced by Boston public broadcaster WGBH, said listeners were up by 14 percent in February from the beginning of the year. Another program produced by WGBH, “NOVA,’’ drew 7 million viewers for the recently aired “Japan’s Killer Quake,’’ the largest audience for an original episode in five years.

Other media, including much larger outlets, have seen big increases, too. Page views on the international sections of The Washington Post and The New York Times rose 60 percent and 25 percent, respectively, from a year ago, according to the newspapers. Page views on the world section of Boston.com, the website of The Boston Globe, surged 91 percent during the same period.

Whether the recent surge of international news consumers will translate into bigger audiences over the long term and stronger bottom lines for the Monitor, “The World,’’ and GlobalPost.com remains unclear. In the past, major world events have propelled media outlets to new heights: CNN’s coverage of the first Gulf War, for example, established the cable network as a successful and influential news source. But Robert Rosenthal, chairman of the journalism department at Suffolk University, said such a long- term boost appears unlikely today. Part of the reason is the nature of the Internet itself, which has tended to fracture audiences among blogs, Facebook and other social media, and ever-more specialized websites.

Advertisers, as a result, remain reluctant to focus their campaigns and spending on these websites. At least, said Rosenthal, they’ll wait and see if sites can hold on to increased audiences.

“Natural disasters and military operations have always resulted in increased audience interest in the news media,’’ said Rosenthal. “Once the crises are over and the dust settles, there is an established pattern that the spike in audience interest recedes. I see no reason why this won’t happen again.’’

Executives at the local news outlets conceded that audiences are unlikely to remain at such elevated levels once the international situation stabilizes, or domestic issues move to the forefront. Still, they said, they expect to hold on to many of the viewers, readers, and listeners who have recently flocked to their sites and programs.

At The Christian Science Monitor, Yemma said audiences have grown, at least in part, because the 103-year-old newspaper has become better at “Web first journalism.’’ Three years ago, the paper discontinued its daily print edition, launched a weekly magazine, and placed its daily report exclusively on the Web.

Last month, the newspaper’s site received about 30 million page views, compared to 14 million a year ago, and the site also attracted 8.5 million unique visitors, up from about 4.5 million last year, according to Yemma and Web tracking services and Quantcast.

Such growth should help the Monitor, a nonprofit publication subsidized by The First Church of Christ, Scientist in Boston, achieve its aim of supporting itself entirely through advertising and circulation over the next several years, Yemma said.

“All traffic produces some revenue,’’ said Yemma, a former Globe editor. “The higher the traffic, the better the revenue.’’

Philip S. Balboni, president of GlobalPost.com, said the start-up has also taken steps that should help it expand its audience over the long term and become profitable. Those steps include a recent redesign of the website, increased use of social media to distribute stories, and more emphasis on breaking news.

GlobalPost generates revenue through display advertising; syndication deals with other news organizations, including PBS and ; and a paid premium service that charges subscribers $2.95 a month, or $29.95 a year. The site expects to become profitable by the end of next year, Balboni said.

Last month, unique visitors to the site reached about 2 million, well above the previous peak of 1.3 million in October, according to Web tracking services. Analytics estimated 2.2 million unique visitors, and Quantcast, 1.9 million. Page views rose last month to 9.5 million, from 3.4 million a year ago.

“People need and want access to this kind of reporting all the time,’’ said Balboni. “The growth does seem to be greater right now for obvious reasons, but it’s not solely attributable to that.’’