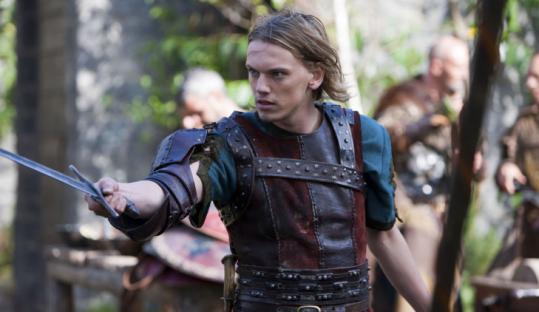 Now the channel is turning to the Arthurian legend, another corner of history where swords are also regularly in play. But “Camelot,’’ which premieres tonight at 10, is not nearly as porny as the “Spartacus’’ shows, even while we meet young King Arthur naked by the river with a girlfriend, and even while his evil half sister Morgan makes mad, passionate — but mostly mad — love to King Lot before the end of the first hour. This series is more sober and plot-driven, with a steady focus on the politics of Arthur’s court, the emotional conflicts in Arthur’s family, and his romantic interest in Guinevere. You could even call it an earnest drama, as Arthur and his loyal knights indulge in a good lot of bromance.

Visually, too, “Camelot’’ is more restrained than “Spartacus,’’ with none of the gladiator show’s “300’’-esque camera moves. It’s a sunny production with ivy-bound castles, green mountains, and dramatic ocean cliffs. The scene in which Arthur pulls Excalibur from a mass of stone is set by a luscious waterfall that could be a backdrop for a Patagonia catalog.

This version of the oft-told tale finds Arthur and Morgan battling for the throne, after King Uther’s death. Arthur grew up with another family, unaware of his bloodline until Merlin comes to whisk him away to royal splendor. “We’re going to build a land filled with hope and honor,’’ Merlin tells his new charge. It’s all extremely familiar material, despite plot tweaks here and there, and yet the show is still somewhat charming in its emphasis on idealism and bravery. Flimsy, but charming enough.

Here’s the problem: uneven casting. Joseph Fiennes is the big name as Merlin, and he has a strong presence. Some of his efforts to be oh-so-mysterious are forced, but still, he’s a good puppet master. And as Morgan, Eva Green packs a good punch as a villain. But Jamie Campbell Bower is too much of an alt-rock type to be convincing as the formidable Arthur, and Tamsin Egerton doesn’t promise to provide much more than surface beauty as Guinevere. She and Arthur look as though they belong in a fashion ad.