‘Borgias’ is dazzling, but dull 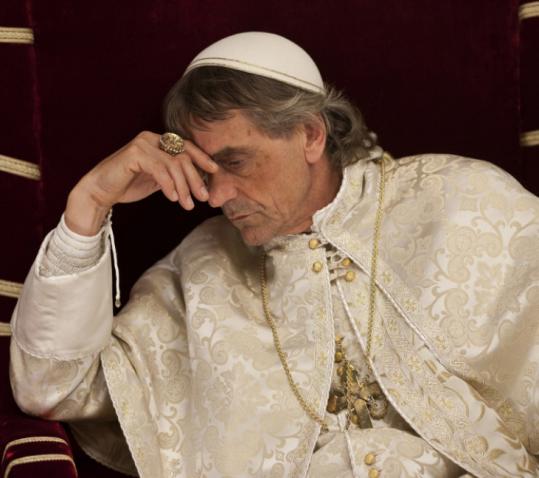 You will absolutely, one hundred percent love every second of Showtime’s new series, “The Borgias.’’ If you are a set designer, that is. Or a costumer. Otherwise, you might be mildly entertained and yet still feel a gnawing hunger for something more — a flavor shot or two with your crème de la crème.

Also not surprisingly, Jeremy Irons is commanding as Cardinal Rodrigo Borgia, who cheats his way into becoming Pope Alexander VI by the end of the first episode. While the angular actor doesn’t resemble the real Pope Alexander VI, portrayed by painters of his day as a mountainous man with a giant proboscis, he evokes the ruthlessness and corrupt spirit you might expect of the notorious power monger. Using his cold brown eyes and furry brow for effect, Irons delivers a man neurotically attached to the papacy, growing lonely and distorted from mistrust of everyone around him. An Oscar winner (for “Reversal of Fortune’’), Irons doesn’t bring a lot of nuance to the role, but he nonetheless manages to balance his monster with a hint of godliness and a passion for diversity.

But still, the story lines in “The Borgias’’ are terribly flat. Series creator Neil Jordan of “The Crying Game’’ and “Interview With the Vampire’’ has dropped a few stitches when it comes to building an absorbing web of subplots and supporting figures. There’s no emotional import to the murder plots and sexual liaisons, of which, of course, there are many. There’s no unexpected behavior or psychological zigzags afoot, the kinds of perversely human flourishes that made “Rome’’ and “The Tudors’’ so much more engaging. The dazzling papal reds and gold-handled swords in “The Borgias’’ can’t compensate for such inherent colorlessness.

There’s no one to care about in this cast of pretty vultures, including the pope’s oldest son, Cesare (François Arnaud), who is forced by his father to become a man of the cloth and carry on the Borgia legacy. Arnaud, looking like Jack White in a puffy cardinal’s frock, is inert as one of the show’s most important characters. He is his father’s consigliore, but their conspiratorial conversations are oddly lacking in juice. David Oakes as younger brother Juan, head of the papal armies, and Holliday Grainger as Lucrezia also ring hollow — generic actors in fabulous outfits. You don’t need good guys to make a superior series — “The Sopranos’’ proved that. But you do need thrilling bad guys, and “The Borgias’’ is sorely lacking on that score.

Even the incestuous interactions between Cesare and Lucrezia fail to be compelling. Yes, “The Borgias’’ makes incest boring.

The basic narrative trope on the show is numbingly static — that the Borgias are like the Corleones of “The Godfather,’’ that they have formidable enemies including the bitter and righteous Cardinal Della Rovere (Colm Feore), that they will do anything to preserve their power. Beyond that broad elevator pitch, there’s not much at play here. Some of the dramatic set pieces are diverting, and certainly expertly put together — a public bath scene, for instance, in which Cesare’s henchman Micheletto (Sean Harris) smears himself with mud to attack Della Rovere. It’s a nice, self-contained bit.

Obviously, Irons’s spot on the next Emmy nominations list was guaranteed the moment he signed his contract. “The Borgias’’ has all the surface requirements you’d expect from a prestige production. Now all it needs is a beating heart.