The house that roared 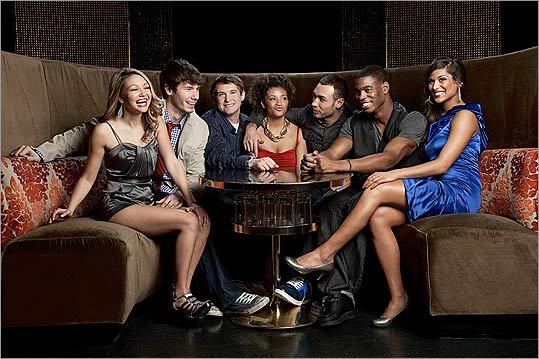 Starting its 25th season this week, "The Real World" goes to Las Vegas for a hot-tub party and more with its cast (from left): Heather, Dustin, Michael, Naomi, Adam, Leroy, and Nany. (Ian Spanier)
By Matthew Gilbert Globe Staff / March 6, 2011

You may not like this thought. I don’t like this thought. Twelve years after “The Sopranos’’ premiere, I would prefer to focus on how the morally complex mob drama paved the way for everything from “Mad Men’’ to “The Shield’’ while it opened up the once unfamiliar region of cable for mainstream audiences. I would rather look back at the legacies of “The Twilight Zone,’’ and “All in the Family,’’ and “Seinfeld,’’ whose fetishizing of lifestyle minutiae still plays out on today’s sitcoms. I would rather talk “Lost.’’

But after 25 seasons, “The Real World,’’ which premiered in 1992, is begging for credit — or blame, depending on your point of view. “The Real World’’ led to the creation of an entire new genre, one that has changed the nature of privacy, fame, and TV. It is the show that spawned almost every reality TV convention we now take for granted, from the ever-present cameras and fourth-wall confessionals to the glitzy home design and the editing-room shaping of “story line.’’ Created by Mary-Ellis Bunim and Jonathan Murray, “The Real World’’ was the breeding ground for everything that “Real Housewives’’ and Kardashian fans now hold most dear.

Later in the game, Mark Burnett added his more cinematic, competitive touch to reality TV with “Survivor,’’ but “The Real World’’ was there first, pioneering the science of casting to make “social experiments’’ into chemical eruptions.

“The Real World’’ was the first time TV told viewers in earnest that ordinary lives could be transformed into lively entertainment programming. Real people had been on game shows, talent contests, and documentaries, but the hybrid idea that they could star as dramatic or comic figures with their own plot arcs was new. The MTV show was a natural extension of the camcorder revolution of the 1980s, as young people grew up more accustomed to — and desirous of — being filmed. Big Brother? Not so scary anymore. Now, of course, that exhibi tionistic impulse first exploited by “The Real World’’ has not only taken over TV — but also is in everyone’s daily lives, too, with Facebook.

One of the hallmarks of “The Real World’’ — what moved it away from documentary — was the great importance of casting. Bunim and Murray wisely stocked their first “Real World’’ house, in New York, with obvious types, types such as the Clown, the Party Boy/Girl, and the Drama Queen that are still de rigueur on reality TV. In New York, the Virginal Innocent was Julie Gentry; this season, Michael Ross fills that role, a socially awkward conservative who lost his virginity only weeks before arriving in Las Vegas for the shoot. While Michael’s studly male roommates scam women and go to strip clubs, he talks about how upset his grandmother would be. As Bunim and Murray knew, character types are more recognizable and appealing to audiences; complicated and interior people do not equal dynamic TV.

Bunim and Murray also knew from the get-go that they needed to cast for conflict, to force drama and — in the case of Pedro Zamora, the AIDS activist from season 3 who succumbed to the disease the day after the airing of the San Francisco season’s final episode — enlightenment. “The Real World’’ forged the tradition of cramming together people of different backgrounds, races, political orientations, temperaments, and sexual identities — now the blueprint for shows such as “Wife Swap.’’

There are always freethinking men and women coupled with intolerant roommates on “The Real World’’; this season, it looks as though Leroy Garrett is going to have problems with Dustin Zito’s bisexual experiences during his porn career, just as Jon Brennan struggled with Tami Roman’s abortion in LA during season 2. Every reality show works to make the cast spark, to avoid the blandness and plotlessness embodied by season 5 of “The Real World,’’ in London. At this point in the history of reality TV, most cast members know they’ve been hired to keep a story moving forward, so the chances of winding up with a fizzle have grown slimmer.

After their first issue-driven seasons, “Real World’’ casting directors also learned that making love is as valuable as — or, in our increasingly permissive culture, more valuable than — making war. They have striven to put sexuality in the forefront of the action, to give the show the porny flavor that is now a definitive element of reality TV. By the time the series made it to a hotel suite in Las Vegas in 2002, a season that included a three-way encounter among some of the roommates, “The Real World’’ had become a major player in the deflowering of young America’s psyches. Every cast since then has been a tinderbox of spring-breaky sexual energy, a more anarchic counterpart to those two other hot-tub operas, “The Bachelor’’ and “The Bachelorette,’’ which premiered in 2002 and 2003, respectively. Likewise “Jersey Shore,’’ which, like “Laguna Beach’’ and “The Hills,’’ is all about hooking up.

Along with casting, “The Real World’’ simultaneously amped up the role of editing. With scripted material, the TV editor has a more limited amount of material to work with and a predetermined narrative direction. With a reality show, the editor has reels and reels of footage that need to be turned into something coherent and compelling. The “Real World’’ editors, like those on every reality show right now, have been the hidden stars. They find a thread, and keep it going — even piecing together material out of order to improve the flow. They add in confessional commentary (which mockumentaries such as “The Office’’ and “Modern Family’’ mimic) to help frame developments. This is the bread and butter of reality TV: assembling the footage and making it hop. Even on “American Idol,’’ which is not a social-experiment reality show, the editors nonetheless create story lines involving the contestants that borrow stylistically from the “Real World’’ format.

“The Real World’’ also pioneered the liberal use of local tourism and fabulous home design to make the “reality’’ jazzier and more aspirational. Every season of the show has doubled as a bright travelogue of a different city — Bunim-Murray’s “Road Rules’’ fully exploited that travel aspect when it premiered in 1995. The “Real World’’ home furnishings are always dazzling, which leads to the requisite group “OMG!’’ upon seeing the new digs. All the Bravo shows resemble “The Real World’’ in visual terms; “The Rachel Zoe Project,’’ for example, is as much about Los Angeles and the sleek havens of a celebrity stylist as it is about Zoe herself. The “Real World’’ homes and apartments are fantasy sets made to serve as backdrops for scenes, not real places for real life.

In the battle against getting stuck with boring footage, “The Real World’’ also forwarded the idea of giving the kids a group project. Now, the cast members would have a built-in plotline, such as a starting their own business or working for a social service organization, where their various work ethics would provide grist for the drama mill. They would no longer split up to work or look for jobs, as they did during the first few seasons. That let’s-put-on-a-show factor paved the way for so many of the reality shows such as “Ace of Cakes’’ and “Making the Band’’ that revolve around a single group goal.

To foster audience loyalty and their own brand, Bunim and Murray realized that they could repurpose cast members — a method that “The Bachelor,’’ “The Bachelorette,’’ “Survivor,’’ “The Amazing Race,’’ and all the VH1 “celebreality’’ shows use liberally. “The Real World’’ was creating minor celebrities, and Bunim and Murray knew that that fame could be parlayed down the road on the “Real World/Road Rules Challenge’’ — now known as “The Challenge’’ — and on reunion specials. That kind of boomeranging has made our own Boston Rob Mariano from “Survivor’’ into a reality-bred star.

Of course, “The Real World’’ itself was built from earlier influences. It was preceded by PBS’s 1973 series “An American Family,’’ which remains a seminal reality influence. But PBS treated the material — the life of the Loud family — with a more documentary, journalistic touch. Like the other reality progenitors, including “Candid Camera’’ and “Cops,’’ “An American Family’’ tried to show what really happened — the Loud marriage broke up and son Lance came out as gay. (“Cinema Verite,’’ an HBO movie on the making of “An American Family’’ starring Tim Robbins and Diane Lane, is due on April 23).

But “The Real World’’ moved the “social experiment’’ reality phenomenon to the far less real, far more contrived level where it now resides. Long before it reached season 25, the show had already shown TV exactly how to chill in the hot tub.