‘Traffic Light’ starts with a flash of possibility 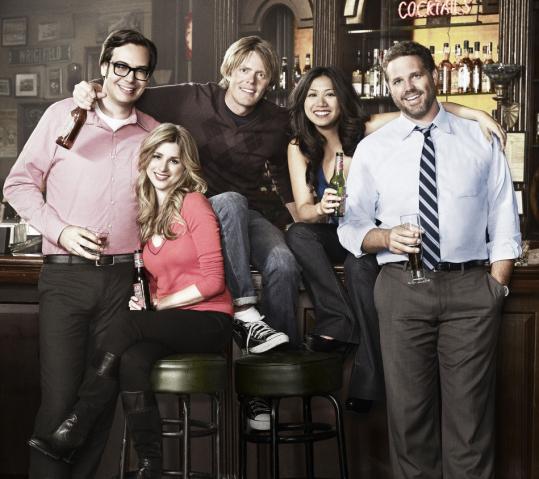 At this point, it’s nearly impossible to imagine a fresh friendship-relationship sitcom in the “Friends’’ mode. The genre has been done to death, killed by a million facile little one-liners about bros angling for girl-on-girl action. Every new network frelationship-com that comes out — “Better With You,’’ “Perfect Couples,’’ “Rules of Engagement’’ — is just so much more evidence of lifelessness. Only “How I Met Your Mother,’’ with its dynamic time-shifting, has managed to find a spark in recent years.

“Traffic Light,’’ tonight at 9:30 on Channel 25, may be the sitcom that will prove me wrong. Yes, it’s yet another ensemble of 30-somethings in the throes of compulsive romantic banter. But the Fox series, which is the new companion to “Raising Hope’’ now that “Running Wilde’’ has been canceled, is significantly better than most of its comparables. If it’s given the right nurturing and development, and only if, it just might manage to shine. It has a set of distinctive actors, a minimum of punch-line mania, and a script that is occasionally charming. The characters actually have the potential to become three-dimensional.

Here’s the blueprint of the show, which was adapted from the Israeli sitcom “Ramzor’’ by executive producer Bob Fisher and produced and directed by Melrose native Chris Koch. Three male friends from college are in constant touch, talking through their everyday relationship issues. Mike (David Denman, who was Roy, Pam’s ex, on “The Office’’) is married to Lisa (Liza Lapira), and they have a child. He’s desperate for “me time,’’ which is why he hides out drinking beer and watching “Iron Man’’ in his parked car. Adam (Nelson Franklin) and his girlfriend, Callie (Aya Cash), just moved in together. Now Adam has to figure out how to spend time out of the apartment with his buddies without hurting Callie’s feelings. And Ethan (Kris Marshall) is the requisite womanizer, who has commitment issues except when it comes to his bulldog, Carl.

This being a sitcom, the men are boyish, of course, but in a less irritating way than most of the other sitcom Peter Pans. Part of their boyishness includes vulnerability and sensitivity when it counts. Their bond is anchored by the daily conference calls they have on their car speakerphones, as they contend with traffic and, in a few scenes, a cop. Some of their chat about contemporary manners is forced, as the writers try to make the guys into a male iteration of the “Sex and the City’’ ladies. Can you remain friends with a friend’s ex, or is there a “burn notice’’ on that connection? Do you talk on your car phone when your significant other is in the car? How do you deal with a woman who keeps “accidentally’’ leaving her things at your home? Much of the material works, but you can feel the writers straining — especially in the premiere — to serve up too many newfangled truisms to viewers in too short a time.

The most endearing character is Adam, who is a writer for a magazine called Bloke. Ten years ago, he would have been the endlessly ironic slacker, with his big black glasses. But here he’s more of a Jimmy Kimmel kind of guy. Franklin gives him a gentle touch; he’s clearly a man who is sincere about the people in his life. Denman also gives Mike an appealing warmth. Rather than the more stereotypical TV sitcom hubby who’s always on the make, and always being reined in by his wife, he’s more of a lug. Like a lot of “Traffic Light,’’ he is distinctive, sympathetic, and tinged with promise.