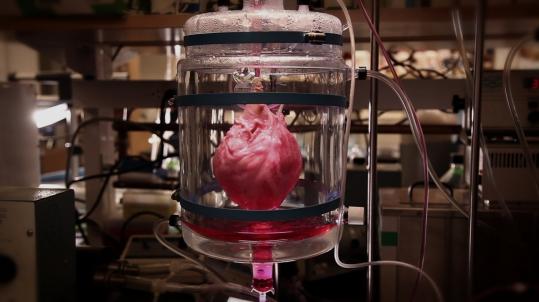 In one lab, a surgeon builds a pink, pulsing heart, cell by cell. In another, a researcher literally sprays new skin onto severely burned patients. Elsewhere, a scientist re-creates the delicate folds of the ear — on the back of a mouse.

Sound like science fiction? It already is science: Researchers in Boston and beyond are building everything from blood vessels to internal organs, using engineering tricks and dome-like bioreactors. Tonight, in “How to Build a Beating Heart,’’ National Geographic Explorer investigates those efforts to transform human health, revealing the pulse-quickeningly cool side of regenerative medicine.

The cast includes a slate of local scientists with ambitious goals: to help people who have lost ears, limbs, or even need a new heart. In Dr. Joseph Vacanti’s lab at Massachusetts General Hospital, a mouse skitters around its cage with a half-size human ear growing on its back. Dr. Harald Ott, a surgeon at Mass. General, washes away cells from a human heart, leaving a cellular structure on which to construct a new one. At MIT, physicist Leon Bellan tries to build delicate blood vessels, drawing inspiration from cotton candy.

Mixed with the science are the stories of people who could use a dose of regenerative medicine, and one who has already benefited from it: soldiers who have lost limbs; a 33-year-old woman who faces the sobering fear she will die waiting for a new heart; a young man who received a replacement bladder built out of his own cells.

The gap between these patients’ immediate needs and the progress of research is, for the most part, significant. And in the end, it is this attempt to humanize the science with the stories of people who could benefit that occasionally triggers the uneasy feeling that the camera is leading us on, because such work still seems far from making a real difference in people’s lives.

For example, in a striking scene, Jessica Whited, a researcher at Harvard Medical School, amputates a salamander limb. Over days, the camera captures the tiny, budding foot that slowly grows from the salamander’s stump, eventually resulting in a perfectly shaped limb. It is miraculous and cool to watch. Whited and other scientists explain the intriguing idea that scarring, which protects people from infections, may be the source of people’s inability to regrow body parts the way salamanders do. Understanding exactly how that happens might, she hopes, hold the key to triggering such abilities in people.

But to drive home the point, the documentary ham-handedly illustrates how limb regeneration would theoretically work in humans. A tiny baby hand sprouts out of a young man’s shoulder, and eventually grows into an arm. Scientists surely want to achieve this goal someday, but the cartoon seems overpromising, setting up the audience for disappointment.

Overall, the show deftly highlights two of the motivations that push these scientists: the possibility of achieving something in the lab that has never been done before and the desire to improve the human condition.

But a viewer might come away from this show thinking replacement body parts are just around the corner — and wondering what went wrong if, in a few years, these technologies are still far from the clinic.

It’s important to remember that even as astonishing progress is being made, biology is complicated. This dream has been around for a long while — a point that is driven home by a black-and-white clip from the 1940s that shows Soviet scientists trying to reanimate body parts, such as a dog’s head. What seems cool and futuristic in one century is bizarre and antiquated in the next.

Even as science advances, the truth is that many of the patients featured on the show may never reap the benefits of regenerative medicine. But that doesn’t diminish the exhilaration of watching the first steps toward the building of a beating human heart.

EXPLORER: How to Build a Beating Heart