From life in the spotlight to hiding for her life 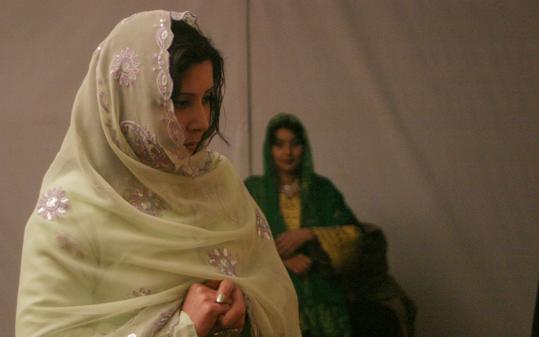 Imagine this scenario: Instead of winning “American Idol’’ in 2005, Carrie Underwood is voted off the show for conduct unbecoming a woman — basically, for enjoying herself while singing. She is denounced by public officials; death threats prevent her from returning to her hometown. She hires a bodyguard and starts packing a piece but still is too scared to go shopping in an open marketplace. Then she marries one of her fans and has a baby, hoping for a measure of safety and forgiveness. Except all she really wants to do is sing in public — to let it rip, put on a show, be a star — if only that wouldn’t get her killed.

In America, this would be a dystopian nightmare. In Afghanistan, it’s business as usual. “Silencing the Song: An Afghan Fallen Star,’’ a 35-minute documentary debuting tonight on HBO, examines the fallout of female showbiz celebrity in a culture that isn’t ready for it. For all of you who hope that, say, Ke$ha would just go away, this movie says be careful what you wish for.

In 2007, Setara Hussainzada was one of four contestants — and one of two women — on the third season of “Afghan Star,’’ a widely popular TV show that debuted in the cultural flowering following the fall of the Taliban in 2001. Havana Marking’s 2009 documentary “Afghan Star’’ captured the drama as it unfolded, with the singers attracting massive followings in their home provinces and elsewhere and the two women contestants, Hussainzada and Lema Sahar, becoming cultural flashpoints. Sahar, the more demure of the two, kept well within expectations of how Afghani women should perform in public.

Hussainzada, not so much. From the first broadcast a figure of inspiration and hope to the country’s women (and many men), Hussainzada sang Persian pop songs with a shimmy and a smile, and when she was eliminated in the first round, she defiantly danced her way through her final number and let her head covering slip to her shoulders. The reaction of the man in the street? “She should be killed,’’ says one passerby filmed by Marking.

“Afghan Star’’ the show and the documentary moved on, but the director stuck around to witness the fallout on its most controversial performer. When “Silencing the Song’’ picks up a year later, Hussainzada has married one of her fans and is eight months pregnant, but her life is in disarray. She lives in hiding in Kabul, unable to return to her home province of Herat. Every so often, the neighbors call the police; at one point, 40 armed soldiers turn up at her door. Even her husband fears for his life to the extent of keeping the marriage secret from his family and refusing to appear on camera without his face blurred.

At the same time, Hussainzada remains an underground celebrity of real power. When she ventures out to a closed shopping arcade, a pair of burqa-clad women approach her; you expect a tongue-lashing but instead she’s praised as an inspirational figure. “When you are singing, you are really full of life,’’ says one before begging her not to stop.

Easier said than done. “Silencing the Song’’ offers a portrait of a natural star denied a stage, a cheery diva ground down by her culture’s insistence that there’s no place for her. It’s a frustratingly sketchy portrait; in the half-hour allotted her, Marking doesn’t give us the wider cultural setting of a country struggling toward freedom of expression, and she may wrongly assume that a US viewer has seen “Afghan Star.’’ (The original documentary airs before the new film tonight and is highly recommended.)

What we get is troubling enough even before Hussainzada’s child is born and further hardships are endured. “What is this country that youngsters cannot make their voices heard,’’ she despairs. While HBO should be commended for showing this film, we’re not the audience that really needs to see it.

In Persian, with subtitles