No defense for clichéd ‘Harry’s Law’ 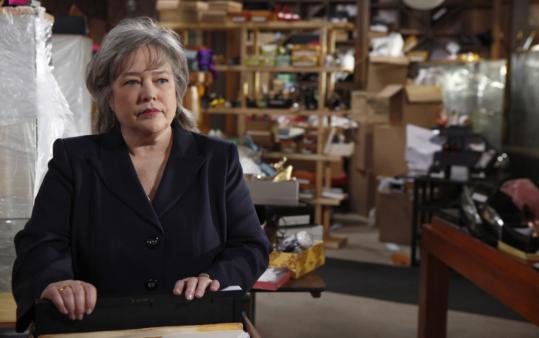 Tonight, a new Kelley show premieres on NBC, and nothing good comes of it — just a big fat invitation to cringe, and I’m not talking about funny “The Office’’ cringing so much as straight-up embarrassed cringing. “Harry’s Law,’’ at 10 on Channel 7, is yet another legal farce from the creator of “The Practice,’’ “Ally McBeal,’’ and “Boston Legal,’’ but with none of the charm, humor, or originality of those earlier shows. It’s an hour of quirk, tics, and bluster, all merely a setup for Kelley to debate political and cultural issues through the mouths of characters in the courtroom. Even Kathy Bates as a lawyer who finds a conscience can’t rise above, as she, too, becomes little more than a rhetorical instrument for Kelley.

And for poor, ratings-starved NBC, “Harry’s Law’’ only promises to bring more sorrow down upon the struggling network. It’s getting hard to watch NBC stumble mid-stumble, which, to get all “Inception’’ about it, was a mid-stumble mid-stumble. I suspect the execs took on “Harry’s Law’’ for the same reason they took on J.J. Abrams’s “Undercovers’’ — not because the show was good but because the executive producer was prestigious and powerful. Nope, not a great way to revive a network, picking programming based on labeling rather than content. The half-baked “Undercovers’’ lasted 11 episodes; “Harry’s Law’’ has a similarly uphill battle.

The show has been self-consciously built for the recession, with a noble hero who literally comes to the rescue of a poor, starving old lady with bronchitis and no health care. It’s meant to be a smile upon the needy, but it all feels painfully condescending and simplistic. Bates plays Harry — Harriet Korn — a weary patent lawyer in Cincinnati onto whom a suicidal kid jumps from a window. She saves his life, and he saves hers — spiritually, that is. How Kelley is that? She instantly becomes a do-gooder, exorcising her guilt for making so much money by opening a criminal-law firm in a bad neighborhood to usher the neighbors — gangbangers, hookers, Chinese laundromat owners — through the justice system.

Harry’s faux gritty office, in which we see her shoot a rat next week, quickly becomes another Kelleyesque nexus of semi-craziness, as her light-headed assistant Jenna (Brittany Snow) sells shoes out of the storefront and fellow lawyer Adam (Nate Corddry) struggles to be a better person and not hit on the young female clients. I’m not sure which is harder to watch — the forced eccentricity of the shoe sales or the lapses into teary earnestness as everyone tries to be a better person. As the curmudgeonly Harry begins to connect with “real’’ people and find her heart, you may find yourself wishing she’d just buy a new pair of shoes instead. That way she can walk all the way back to her high-rise patent-law practice on the other side of town.