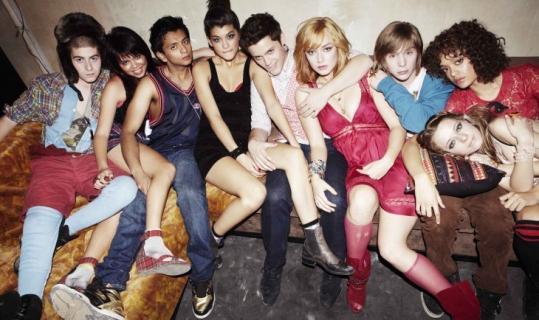 The middle- and working-class teens of “Skins’’ (above) smoke, take pills, and drink. Below (from left): Sam Huntington, Meaghan Rath, and Sam Witwer in “Being Human.’’ (Jill Greenberg/Syfy (Below))
By Matthew Gilbert Globe Staff / January 17, 2011

It’s a little pointless to judge a movie by closely comparing that movie to the novel it’s based on. Each creation — novel, play — ought to be judged on its own merits. Different mediums, different storytelling languages.

And I’m beginning to think that it’s similarly pointless to judge American TV remakes by comparing them to their British originals. When a remake succeeds (“The Office,’’ “All in the Family’’), it’s usually quite distinct from its British counterpart. It’s yet another American series derived from another source, in the way “Gossip Girl’’ comes from the novels by Cecily von Ziegesar and “Boardwalk Empire’’ is based on the nonfiction book by Nelson Johnson.

This month, three British shows — “Shameless,’’ “Skins,’’ and “Being Human’’ — have been adapted for American TV. Each one resembles its progenitor, and none is quite as good; but two of the remakes — Showtime’s “Shameless,’’ which premiered two weeks ago, and MTV’s “Skins,’’ which premieres tonight — offer something worthy nonetheless. Both dramedies include boundary-pushing material about teen sex and drug use and yet both have poignant undercurrents that ground them in emotional realism. The third, Syfy’s “Being Human,’’ which also premieres tonight, is blandly forgettable.

The reputation of “Skins’’ precedes it. The teen ensemble drama has gotten a lot of attention in the UK, where it is now in its fifth season, for its non-judgmental depictions of sex, drug use, and racy language. And those elements are almost equally present in the remake, at 10 p.m., which is already inspiring public dismay from the Parents Television Council. This is a show that, like movies such as “Kids,’’ isn’t doubling as a cautionary tale. It’s a snapshot of a culture of middle-class and working-class teens who smoke cigarettes and pot, who take pills and drink alcohol whenever they can, and who masturbate and hook up frequently.

Yes, parents, beware. This is beyond anything on the CW; it’s more graphic and less softened with melodrama and romantic play. The “Skins’’ kids aren’t cold or heartless, but their feelings hide beneath their vague expressions and still unformed communication skills. They aren’t little adults, like so many teens on TV, or endlessly cute like those on “Glee’’; they’re teens who can be cocky but who are clearly in over their heads. “Skins’’ makes me think of “Queer As Folk,’’ another UK remake, in the way it refuses to turn away from culturally proscribed teen behavior in its quest for authenticity.

In the first episode of “Skins,’’ which is almost a duplicate of the British premiere, the slick Tony (James Newman) is trying to get his shy pal Stanley (Daniel Flaherty) to have sex with a girl. It’s a typical high school comedy plotline, and it develops into a predictable farce when Stanley winds up buying pot from a creep and getting in financial trouble. We meet the other members of the group, including the drug-addled Cadie (Britne Oldford), lesbian cheerleader Tea (Sofia Black-D’Elia), and Chris (Jesse Carere), a clown who finds himself alone in the world. And there’s a big, crazy party, with, of course, vomiting.

It’s too bad the premiere plot is so stale; in later episodes, each of which focuses primarily on one of the characters, the pathos and particularities of the characters’ lives emerge effectively. But that’s fitting, in a way, since the “Skins’’ teens lead with the transgressive stuff, too, before we see their troubled souls. In later episodes, the actors also get to show more of their range. Producer Bryan Elsley, who also created the British series with his then-19-year-old son, has cast MTV’s “Skins’’ with unknown actors, and by the third episode they have formed a strong group vibe.

While MTV reaches beyond “Jersey Shore’’ with “Skins’’ — scripted TV is now cutting edge on MTV?! — Syfy is hoping to create a sci-fi crossover hit with “Being Human.’’ Alas, this is an unsatisfying adaptation. Set in a Boston that looks nothing like Boston, three supernatural roommates try to live ordinary lives. Vampire Aiden (Sam Witwer) is trying to stop killing people; werewolf Josh (Sam Huntington) is hoping to form bonds despite his monthly change; and ghost Sally (Meaghan Rath) is trying to figure out how she died.

It’s a good setup, but the production is too grim and the acting is spotty. Huntington goes irritatingly over the top in portraying Josh’s neuroses; he’s like Ross from “Friends’’ on an anger spiral.