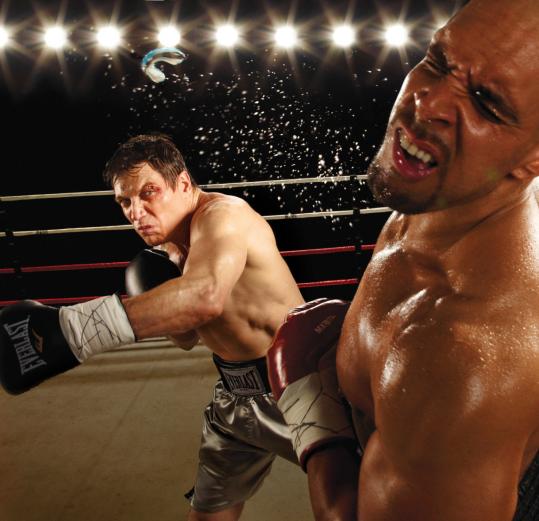 ‘Lights Out’’ comes as a surprise to me, just as “Friday Night Lights’’ did back in 2006. It’s a boxing drama, but only in the way “FNL’’ is a football drama — mostly peripherally. “Lights Out’’ does include a few dynamically choreographed sequences in the ring, with torn-up men dancing at each other as drops of blood and sweat spew artfully. But the series is primarily a portrait of a one-time heavyweight world champion getting hit with financial woes, physical issues, and family strain all at once. Think of it as “Champ of a Certain Age.’’ You really don’t need to be a fan of the sport to be a fan of the show.

And I am a fan of “Lights Out,’’ which premieres tonight at 10 on FX. The story of Patrick “Lights’’ Leary is engrossing from the first bell, with nicely developed plots and psychological twists that transcend the genre cliches of the boxing drama. And the acting is strong where it matters, with Holt McCallany’s breakthrough performance as Lights and Pablo Schreiber as his business manager brother Johnny. These men drive the show forward, as they stumble into dark deals with crooked New Jersey cops and businessmen out of “The Sopranos.’’ Indeed, Lights’s nouveau riche manse could be right down the road from Tony’s.

Lights lost the title five years ago, in a controversial fight against Richard “Death Row’’ Reynolds. After that, his wife, Theresa (Catherine McCormack) gave him an ultimatum: “Either you stop, or we stop.’’ Now he runs a failing gym with Johnny and their father, Pops (Stacy Keach), and he tries to milk the last vestiges of his fame by selling collectibles on QVC, reading Bingo numbers at society events, and making cheesy TV ads for local businesses. He’s also raising his three daughters, while Theresa trains to be a doctor, although he’s unsatisfied with the Mr. Mom role.

Everyone around Lights wants him to get back in the ring with Reynolds, and that’s the uber-plot of “Lights Out.’’ Will dire circumstances and backroom deals, many of them the result of Johnny’s bad financial decisions, push Lights back into boxing? Will that jeopardize his family life, his integrity, his body? There’s some “Raging Bull’’ in the show, and “Cinderella Man,’’ too, of course — but “Lights Out’’ has its own identity. As a TV show, it is able to spend time with the characters’ ambivalences and build a complex chain of motivating events. Executive producer and show runner Warren Leight takes full advantage of the room he has to enrich and distinguish his story.

McCallany is the kind of actor who has been around for a long time, in smaller roles on shows such as “Heroes,’’ “CSI: Miami,’’ and, of course, “Law & Order,’’ as well as in movies including “Three Kings’’ and “Alpha Dog.’’ But he holds the center beautifully on “Lights Out,’’ inhabiting the role of Lights as if he’d been living in it for years. He rarely shows us Lights’s desperation and humiliation, as he signs boxing gloves for people who could care less. He gives us a man who greets every one of life’s jabs without blinking, with almost a smirk, just as he might in the ring. He never lets us feel sorry for this man, once the breadwinner and star for his extended family and now useless. But still you sense the bomb ticking inside him, alongside his underfed vanity.

The solid McCallany is balanced nicely by Schreiber, whose shifty Johnny isn’t able to sit on his feelings as successfully as Lights. Johnny never meant to go to business school, but his own boxing career was cut short; now he’s in a freefall of jealousy, irresponsibility, and selfishness. Schreiber is compelling in every scene, and so is Reg E. Cathey as a powerful promoter and Keach as the working-class patriarch who only has contempt for his sons’ dreams of wealth and fame. Only McCormack disappoints in the cast, and not because her acting is bad. It’s her British accent that fouls her up, as she tries unsuccessfully to tamp it down. I’d rather she just let her accent be natural, and therefore less distracting, like Gabriel Byrne on “In Treatment.’’

With “Lights Out,’’ it seems as though the TV gods are having a good winter. This month, already, a handful of new shows are proving to be Season Pass worthy — Showtime’s “Shameless’’ and “Episodes,’’ PBS’s “Downton Abbey.’’ Add the return of FX’s “Justified’’ early next month and you’ve got a really good — or should I say knockout — midseason so far.