All in the dysfunctional family 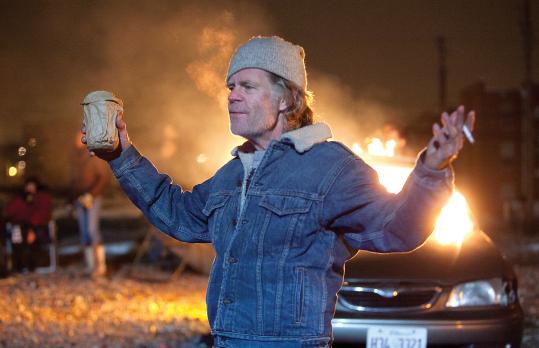 When I think of dysfunctional family dramedy, I tend to think of upper-middle-class shows like “Parenthood’’ and “Brothers & Sisters.’’ Well-preserved grandparents regret screwing up their adult kids, who are busy over-correcting those mistakes with their own kids. Meanwhile, the furniture is fabulous, and the wall colors are so perfect they make me want to pull out my paint-chip wheel.

So “Shameless,’’ Showtime’s wonderful remake of the long-running British series, comes as a nice change of pace. In this excellent, affectionate family dramedy, which premieres Sunday at 10, the walls are grimy, the upholstery is torn, and the one bathroom is a traffic jam. What’s more, the show’s single parent of six — Frank Gallagher, played by William H. Macy — is a raging, bitter drunk, often found passed out on the floor in a pool of urine, a Charles Bukowski-like figure regularly carried home by the cops. No well-preserved patriarch, he.

The Gallaghers of Chicago are poor, so the kids steal milk from a dairy truck and coupons from neighbors’ newspapers. Brilliant teen son Lip (short for Phillip) takes PSAT tests for other students for a wad of cash. While Frank blows his disability checks at local bars, his kids scrounge together money like Fagin’s crew from “Oliver Twist.’’ To be sure, “Shameless’’ feels like contemporary Dickens, portraying a forgotten underclass living close to the streets and the world of nonviolent crime. The show’s sexual situations — including oft-undressed neighbors Kev and Veronica — are very now, and very Showtime; but the socioeconomic plight is old indeed. The Gallaghers’ struggle predates our current financial crisis.

But wait: “Shameless’’ is not a gloomy TV lesson created to show us how hard some people have it. Executive producers John Wells (from “ER’’) and Paul Abbott (who created the British “Shameless’’) have made sure that the “edy’’ half of dramedy is loud and clear. The Gallagher kids live in dire circumstances, but “Shameless’’ focuses on how they survive. Frank is almost a peripheral figure, as Emmy Rossum’s Fiona, the oldest sister, keeps the household running. There’s something sweet in the way the kids scrunch together on the couch to watch the Discovery Channel or rally to pay the gas bill. You can feel their strength in numbers. But that sentimental streak in the show is compensated by Frank’s coldness and the scrappy urban realism, translated so effectively from the British original.

Rossum is quietly affecting as Fiona. She’s softer but no less powerful than Anne-Marie Duff, who played her in the British version. You can see tired shadows around Rossum’s eyes, as she pushes the kids out the door to school. She is the classic caretaker type, the child who is more adult than the parent; but she doesn’t sacrifice her own happiness. She falls for a car thief named Steve (Justin Chatwin, looking like a young David Cassidy), who feels right at home in the Gallagher’s anarchic kitchen.

The rest of the young cast is extraordinary, from Jeremy Allen White’s Lip to Cameron Monaghan as brother Ian, a teen who is gay and having an affair with the married owner of the variety store where he works. The moments when Lip confronts Ian about his sexuality are remarkably honest and refreshing, as they each slowly realize they don’t need to play out predictably hostile roles. Even little Emma Kenney has her moments as freckled Debbie, quietly hungry for parenting and so forgiving of Frank.

As Frank, William H. Macy is just right. He makes Frank completely dislikable, as he complains endlessly and loudly about how he is a victim of everything. He’s Dickensian in the mechanical way he rants on and on, turning every situation into an opportunity for self-pity. He’s missing the parental instinct that’s usually assumed on American TV, immune even to the worship of Debbie, who slips a pillow under his head when he’s passed out on the floor. At one point, the abusive Frank actually leaves his kids and moves in with an agoraphobic neighbor, played by Joan Cusack, who treats him like a king in exchange for sex.

Still, Macy and the writers resist turning Frank into a horrific monster; the show is too big-hearted for that. Ultimately, he’s just a horrible clown, one his family has to work around. And they do, brilliantly. Despite all the booze, illegal activity, open sexuality, and adult narcissism, the kids are all right.