‘Downton’ a delightful romp, upstairs and down 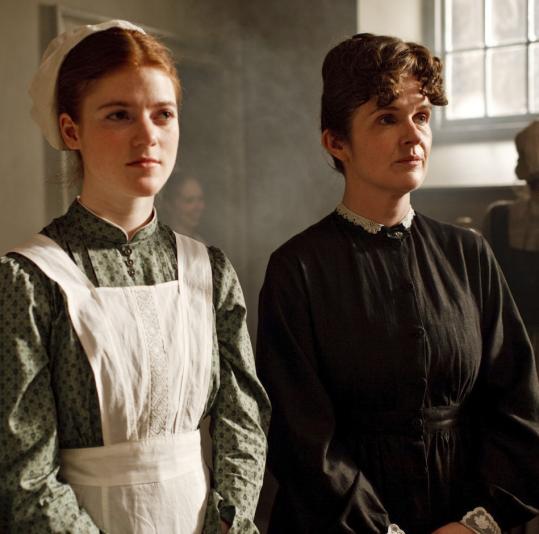 For its 40th birthday, “Masterpiece’’ is giving us a gorgeous present. “Downton Abbey’’ is a four-part miniseries that has me pondering my Top 10 for 2011 only a few weeks after having written up last year’s list. This extraordinary upstairs-downstairs drama, written by Oscar-winning “Gosford Park’’ screenwriter Julian Fellowes, is a dramatic, intelligent, soapy, comic, and wise piece of work, one that explores social shifts on the eve of World War I while delivering a remarkably engaging cast of characters. “Downton Abbey’’ was a ratings hit when it aired in the UK last year, and I completely understand why. I loved it.

Of course, if you’re not a fan of period pieces about lords, ladies, butlers, and cooks set in majestic houses with epic drawing rooms, well then you have no business here. “Downton Abbey’’ is indeed a typical classic “Masterpiece,’’ with Maggie Smith onboard as a grumpy dowager and a plot predictably steeped in British manners and the details of the class system. Improper liaisons occur, of course, and untoward pasts emerge. Tea is served. But the story is so smartly written by Fellowes, and the characters are so well-acted, that it all feels engagingly fresh — and poignant, too. The world is about to dissolve into war, and tragedy is hovering in the air.

The outline of “Downton Abbey,’’ which premieres Sunday night at 9 on Channel 2, involves the future of Downton, a grand estate that, according to an inheritance law called an “entail,’’ must be passed on to a male heir. Downton’s Robert Crawley, the Earl of Grantham (played with fierce honor by Hugh Bonneville), only has three daughters, which means his beloved home must go to a distant cousin, Matthew (Dan Stevens). Matthew, a working lawyer, doesn’t want Downton. But the earl refuses to challenge the entail, even while it jeopardizes his daughters’ futures. “I am a custodian, my dear, not an owner,’’ he tells his American-born wife, Cara (Elizabeth McGovern).

The earl’s daughters contribute plenty of juicy drama to “Downton,’’ particularly the oldest, Mary (Michelle Dockery). Ideally, Mary would marry Matthew and keep the property in the immediate family, but Mary is independent and drawn to flashier men. She is also engaged in a vicious battle with her seemingly genteel sister Edith (Laura Carmichael), who is less picky when it comes to finding a husband. I found Dockery compelling, as Mary’s plotline takes her in unexpected directions. Her face, with sharp features and cold, close eyes, seems to change shape across the miniseries.

Meanwhile, the servants are engaged in their own complications. Gay footman Thomas (Rob James-Collier) is a nasty schemer who, with lady’s maid O’Brien (Siobhan Finneran), is plotting to bring down the new valet, Bates (Brendan Coyle). They are a bitter pair, and they stand apart from the other servants, most of whom feel strong loyalty to Downton and to the family. Noble Mr. Carson (Jim Carter) and Mrs. Hughes (Phyllis Logan) are the downstairs parental figures, as willing as the earl to trade their self-interest for the betterment of Downton and the old system it represents.

Ultimately, the big theme of “Downton’’ is embodied in the constant tug between free will and the social systems. Some of the characters, both upstairs and downstairs, are driven by their wants and needs, others find peace by submitting to a greater plan. “We all have different parts to play, and we must all be allowed to play them,’’ the earl says to the more modern-minded Matthew at one point, trying to draw him into the world of property. Yes, Matthew stubbornly resists Downton Abbey, but I’m thinking you won’t be able to resist the addictive miniseries that’s named after it.