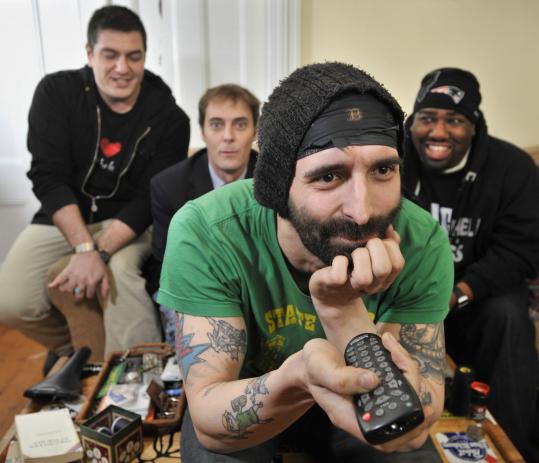 Musician and comedian Rob Potylo (foreground) and some of his friends will be the focus of a semi-reality show on the cable channel MyTV. (Josh Reynolds for The Boston Globe)
By Nick A. Zaino III Globe Correspondent / December 24, 2010

Last year, local musician and comedian Rob Potylo spent what he describes as the “Christmas from hell’’ in his lower Allston apartment, sitting in his room eating Pop-Tarts with the lights off.

Potylo is hoping for a better Christmas this year. “This one’s going to be a little bit nicer,’’ he says on a rainy October night during an open house at Cambridge’s New Alliance studios where he’d just performed a preview of his most recent album, “Something Happened at Horse Lake.’’ “I’m still going to be at my house, I’m going to have Pop-Tarts, but I’ll have the TV on.’’

He’ll be watching the premiere of his new TV series, “Quiet Desperation,’’ which airs tonight on MyTV at 11 p.m. The show, which stars Potylo and a gang of his talented friends in the local comedy and music scenes, will reach roughly 2.5 million homes around the New England area. Doug Finck, a general manager at MyTV who had been looking to add more local programming to its schedule, was thrilled when Metropolitan Pictures, the company that produces the show, pitched it to them. “This couldn’t be more perfect, as far as we’re concerned — a locally produced sitcom starring local stand-up comedians,’’ he says.

With the enthusiasm of MyTV and the help of WBOS — who will be promoting the show and the many musicians who happen into its informal cast — everything seems to be falling in line. But Potylo has been here before. Over the years, he’s seen a high profile DJ gig on WBCN come and go, and had his music courted by record labels only to watch promising deals fall through. He’s wary to imagine “Quiet Desperation’’ as his big break.

“There’s no breaks, there’s just ups and downs,’’ he says. “If there was a break, then there would be some permanence, you know? It’s up and down. Radio. Music. Comedy. Television. It’s just an adventure. I don’t know where the breaks are.’’

If “Quiet Desperation’’ is about anything, it’s about those ups and downs. The series follows Potylo as he navigates Boston’s music and comedy scenes, encountering a host of characters — some fictional, some playing themselves, and many more falling somewhere in between. There are no actors. Just about everyone in the show is either a Boston comedian or musician, over 150 by the count of the show’s producers. The dialogue is almost entirely improvised, and there is little or no preparation for a scene.

Both the show and its plot are all over the map. A typical episode of “Quiet Desperation’’ might find Potylo writing music in his living room in Allston while his cohort, local comedian and show regular Mehran, cooks up a pan of hot dogs and mysterious pills in the kitchen. It might then cut to an apartment in Everett, where comedian Tom Dustin (who plays Potylo’s manager) openly disses his client’s music; or to Revere, where comedian Bigg Nez shoots a profane video on the beach; or over to Allston, where a small-time local band plays songs to a near-empty Great Scott.

Comedian Chris Coxen, whose character Renaldo helms an absurdist fictional band called the Rufff Riders on the show, credits the multifarious nature of “Quiet Desperation’’ as the source of much of its impact. “When you see the Rufff Riders and the stuff that I do, you’ll probably realize there’s some absurdity to it,’’ Coxen says. “But some of the stuff is very close to the bone — you won’t know if it’s real or not. That’s what we’re trying to do. It’s sort of like a reality show, a mockumentary, and a crappily made sitcom. The best of all.’’

This ADD-styled approach, plus Potylo’s crass yet endearing brand of improvisation, might pose some challenges as the show transitions from a short-form Web series to a regular TV format. Much will depend on how the final product is edited and perhaps reinterpreted — a process still in progress as the show makes its debut.

“It was shot very much as this sort of ‘Short Attention Span Theater,’ which, for a five- to seven-minute format online, is fine,’’ says Mehran. “But 22 minutes of stroboscopic moments doesn’t play as well.’’

Some of the show’s realness comes from Potylo’s attempts to be taken seriously. Potylo started out as Robby Roadsteamer, a hard-rock character with a Cookie Monster voice and a mustache made from electrical tape who regularly berated his audience and penned songs with titles like “I Put a Baby in You.’’ Gradually, he has shed that persona, leaving the comedy clubs for the music clubs and performing under his own name. At Potylo’s CD release party at the Middle East earlier this month. he seemed almost in a trance, playing an hourlong solo set drawing mainly from “Horse Lake,’’ a set of songs which could be considered quirky, but not jokey.

Potylo says he needed to make a statement with that show — for people to see him as himself. “There’s a lot of people who think I’m one step away from screaming at people and putting on the wig,’’ he says, “and I wanted to get myself as vulnerable and bare-bones as I could be.’’

He sees many of his contemporaries in the local music and comedy scenes facing the same plight: trying to get attention from a shrinking media pool, working unsatisfying day jobs, trying to get people to see their shows, and sometimes escaping into drugs or drinking. “I just wanted to create a show that showed those aspects in a comical way,’’ he says.

There is also the prospect of providing a platform for local talent to help stem the tide of talent Boston loses every year to New York and LA. It’s a lofty goal; so if Potylo seems a bit guarded about its success, it’s only because this is a very personal quest for him.

“I wouldn’t be telling people if I wasn’t optimistic about it,’’ says Potylo. “I think it’s an incredible show. I think it’s one of the funniest things out there, just because of the fact that I’ve captured personalities of some of my nearest and dearest comrades in the comedy and music scenes the way I love them and saw them.’’

Nick A. Zaino III can be reached at nick@nickzaino.com.